We drive flat-out at Spa-Francorchamps in the Nissan GT-R – then discover the 570hp 'Godzilla' is even better on the road. 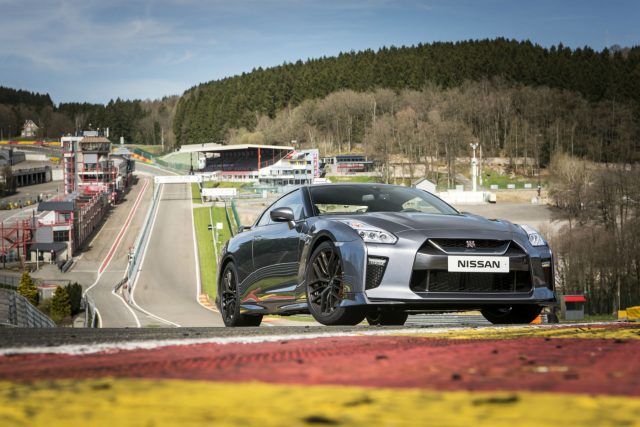 Eau Rouge, Raidillon, Les Combes, La Source… The list of Spa-Francorchamps’ corners reads like a motorsport greatest hits. Nestled among the lush hills of the Ardennes, Spa is widely regarded as one of the best circuits in the world. Legends have been born here, lives have been lost here. Today, it plays host to another legend: the Nissan GT-R.

If the car in these photos doesn’t look entirely ‘new’, that’s because it isn’t. The current (R35) GT-R was launched way back in 2007, but – like smartphone technology or the common cold – it has evolved constantly, with annual updates to keep it competitive.

This review, since updated, was first written in 2017, so the car I drove was the ‘MY17’ model. It represented the most comprehensive refresh in the car’s history – and still does. Still, keeping pace with the Audi R8, Mercedes-AMG GT and Porsche 911 Turbo has never been easy.

We can pore over spec details later, though. Right now, the electronic gates have swung open and, with sweaty palms and 570hp under my right foot, I’m about to unleash the GT-R on an empty racetrack.

A relaxing Spa break? Not quite 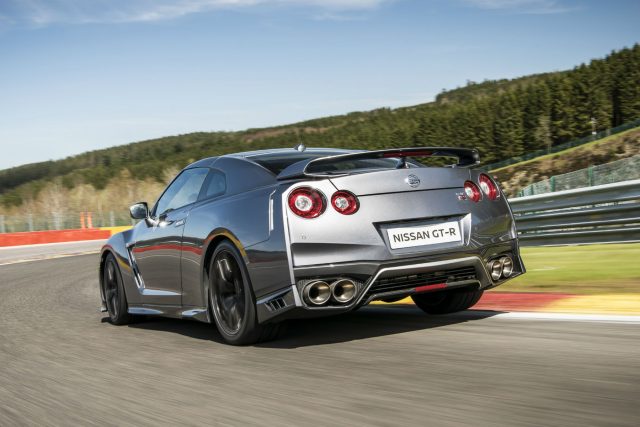 Entering the circuit at La Source, I dive downhill and straight into Spa’s most famous corner: Eau Rouge. This tight left-right-left kink bottoms out and then climbs sharply, making the front end of the car go light as I surge forward into the Kemmel Straight.

Along here, the GT-R accelerates relentlessly, its twin-turbo V6 blasting us beyond 150mph before you can say “Les Combes”. Braking hard, you can really feel the car’s 1,752kg heft, but it tracks straight and feels stable. Thank mammoth cast-iron discs (there’s no carbon-ceramic option) and Brembo six-pot calipers.

Well, here we go – first time at Spa and I’ve got two hours on-track in the new MY17 Nissan GT-R. 👍🏻 pic.twitter.com/HDAOcstXw8

Turning in, the car feels planted and precise, but I overcook this tricky series of three bends at the first attempt and it bumps uncomfortably over the rumble strips. The rear-biased four-wheel-drive catapults us away again without even a chirrup of wheelspin, but it’s clear the GT-R isn’t averse to understeer (running wide) if you push too hard in slower corners.

As I’ll discover, taking faster bends too quickly has the opposite effect…

Holding on for a hero 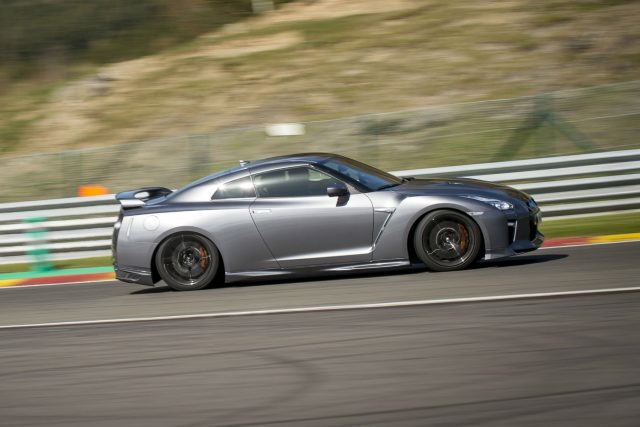 As Spa’s rollercoaster ribbon of asphalt plunges downwards, I enter the more open corners at Pouhon and Blanchimont. The GT-R is so fast, and throttle response so instant, that it’s easy to carry far too much speed here. And being a reckless amateur, that’s exactly what I do.

As your velocity increases, so the Nissan’s cornering attitude shifts from understeer to tail-twitching oversteer. Being a higher, heavier car than many of its rivals means this transition happens more slowly and predictably.

Nonetheless, the slight wriggle from the rear end as we approach Blanchimont at over 100mph makes me wish I’d packed my brave pants.

Of course, even a car with as much traction and grip as the GT-R can be provoked into going sideways if you wish. But I didn’t come to Spa to shred tyres. As as racing driver will tell you, smoothness is the key to speed. Well, that and the small matter of 570hp. 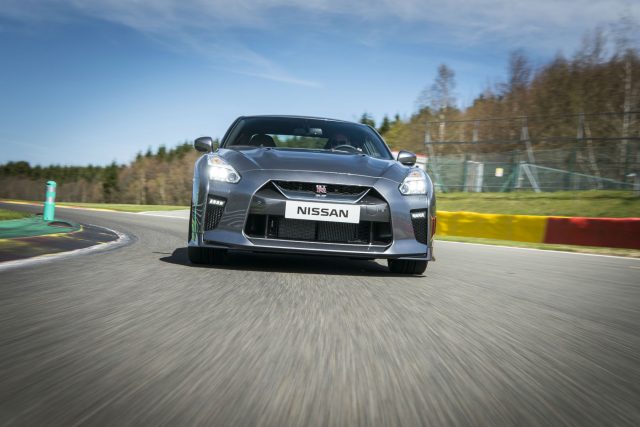 ‘The ultimate performance super-sports car’ is the modest claim Nissan makes for the GT-R. But it might just have a point.

With 570 hp from its 3.8-litre V6 the MY17 GT-R will explode to 62mph in ‘about 2.7 seconds’ and keep going to 196mph. The standard car last set an official Nurburgring lap time in 2013, a 7min 18sec result making it one of the fastest production cars ever. Unless you enter the rarified world of six-figure supercars, there’s little to match it.

That said, the GT-R isn’t the bargain at once was. When first launched, it was barely more expensive than a BMW M3. But prices have crept up over the past decade. Skipping forward to 2020, the cheapest version now starts at £84,035. The Track Edition nudges over £100k, while the flagship GT-R Nismo is £175,035. Gulp.

For that kind of money, Nissan’s flagship needs to offer premium-feel as well as performance. And that’s where the GT-R falls short. 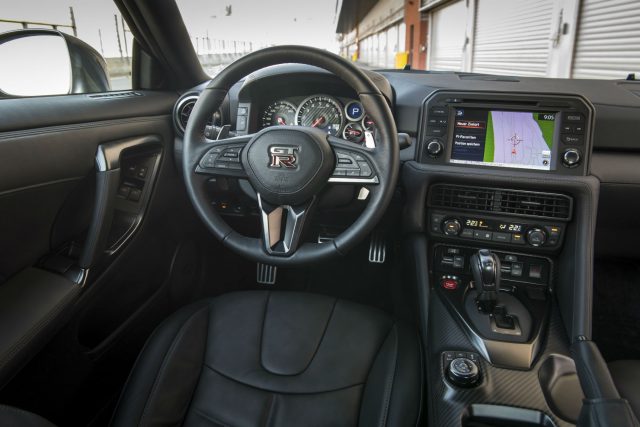 When the R35 was born, Tony Blair was still prime minister. At the time, its tech-heavy cabin – including a media system designed by Polyphony, makers of the Gran Turismo games – was futuristic and impressive.

However all those buttons look dated in the iPhone age, so Nissan has fitted an eight-inch touchscreen that de-clutters the dashboard (a bit). There’s also a rotary controller on the centre console, so you can keep your eyes on the road – rather than on your G-force meter, gearbox oil temperature gauge or real-time braking pressure graph. Yes, this is still a car to delight data nerds.

Proof that it isn’t only MY17 Nissan GT-Rs at Spa today – this current model was parked just outside the circuit. pic.twitter.com/0aT2elv8bA

Whether its upgraded cabin will delight the rest of us is debatable. Nissan has swathed the dashboard in hand-stitched leather and fitted plusher, more comfortable seats (electric Recaros are a £2,000 option). Yet there’s still an awful lot of hard plastic, plus a random scattering of switchgear that will be familiar to anyone who’s driven a Note or Qashqai.

On the plus side, the GT-R remains quite practical. Its two rear seats are fine for kids – albeit hopelessly cramped for adults – and its deep boot is big enough for a week away.

Iron fist in a boxing glove 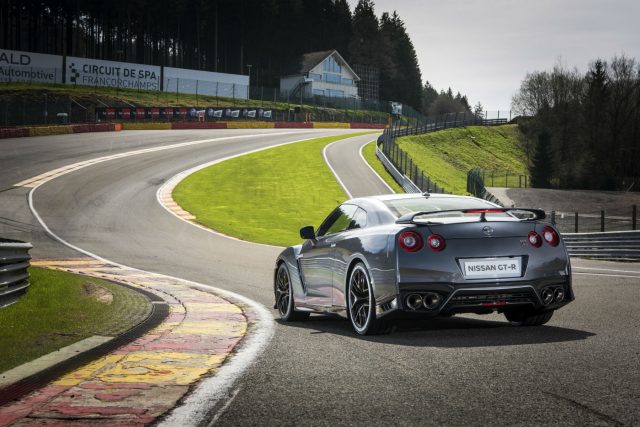 The changes on the outside of the car are less obvious. Only dedicated GT-R spotters – and plenty of such folk exist – are likely to notice the V-shaped front grille and new front bumper with LED daytime running lights.

At the rear, the Ferrari-aping round taillights are still the car’s most distinctive feature, although a closer look reveals a new silver-finished diffuser, plus side air vents next to the titanium-tipped exhaust pipes. You wouldn’t call the GT-R beautiful, but it’s brawny and utterly purposeful.

As we leave Spa through the local town of Francorchamps, it’s time for the acid test. A group of school children is being marched along the pavement by a flustered-looking teacher. The boys at the head of the queue stop suddenly as they point and stare at our rumbling, growling GT-R. The teacher shouts and gesticulates. Our work here is done.

Gran Turismo for the road 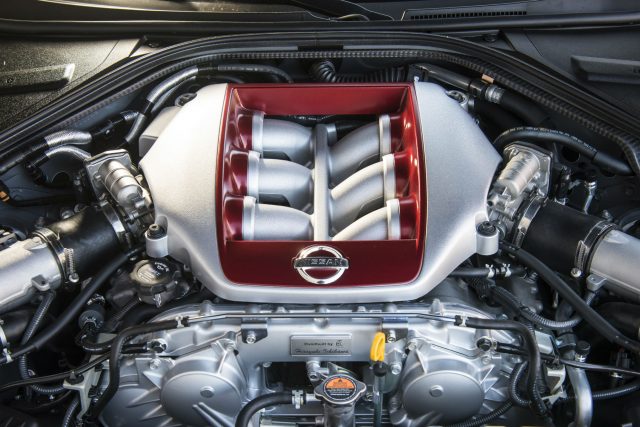 It’s ironic the GT-R found fame through the Gran Turismo racing game, because it’s brilliantly capable GT. And we mean that in the old-fashioned sense: a car that could whisk you to the south of France without breaking sweat.

If anything, the uber-Nissan is even more impressive on the road than on the track. Through the tight turns of Spa, it feels heavier and less agile than some similarly-powerful sports cars. Yet on the road, it’s crushingly competent, with acceleration, braking and cornering abilities so far beyond what you can safely – or legally – achieve that you never want for more.

Unlike many rivals, the GT-R is also very easy to drive. You don’t have to clamber in and out, the seating position is upright, ride comfort is better than you might expect and the control weights won’t scare somebody more used to a Micra.

With the six-speed dual-clutch gearbox in auto mode, its a refined and relaxing way to travel. The sheer size of the car is the only potential stumbling-block. 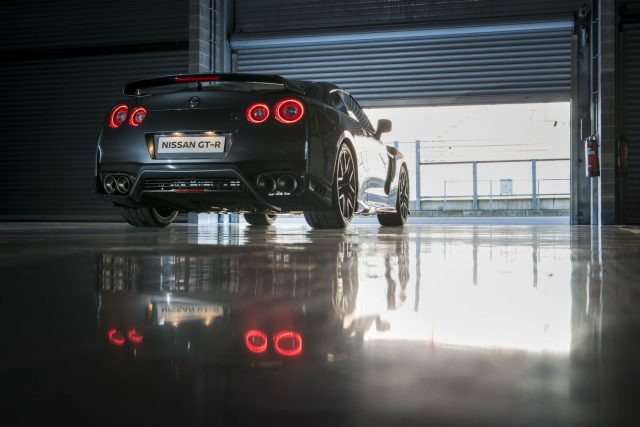 One comment you’ll occasionally hear about the GT-R is that it lacks character, or that it doesn’t have the soul of a sports car.

I don’t buy that, though. The car the Japanese call ‘Godzilla’ may not be as head-turning as a Lamborghini. Its interior may still look a bit downmarket and its V6 doesn’t sound special enough. But Nissan’s fast and furious flagship has a breadth of abilities that only a Porsche 911 Turbo can match – especially if you’re just an ‘average’ driver like me.

It takes time to fully appreciate the GT-R’s talents (a track session at Spa helps, admittedly) but it will confound expectations and, ultimately, get under your skin.

As I handed the – cheap and plasticky – key back at Dusseldorf airport, all I wanted to do was carry on driving. And what better testimonial is there for ‘the ultimate performance super-sports car’ than that? 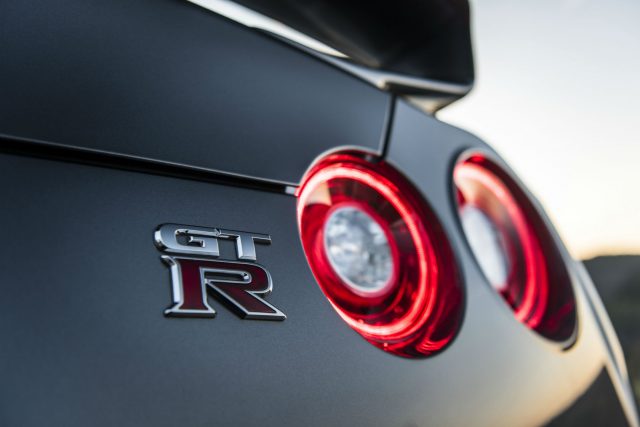 The Audi A3 e-tron certainly delivers the electric range and long-distance fuel economy... but can it do the same in the real world? We find out.
Read more

Formula 1 racing will be carbon-neutral by 2030

F1 has announced it plans to reach 'net zero carbon' by 2030, and make its events fully sustainable by 2025.
Read more

Land Rover is donating a fleet of 150 new Defenders to emergency services around the world in the fight against coronavirus.
Read more

Renault is using 100 percent recycled material for the seats of its Zoe electric car. The fabric is made from seatbelts, plastic bottles and textile straps.
Read more

Video: Classics on the Common 2018

From Fords to Ferraris, Classics on the Common in Harpenden is the UK’s ‘anything goes’ car show. Here are our highlights
Read more