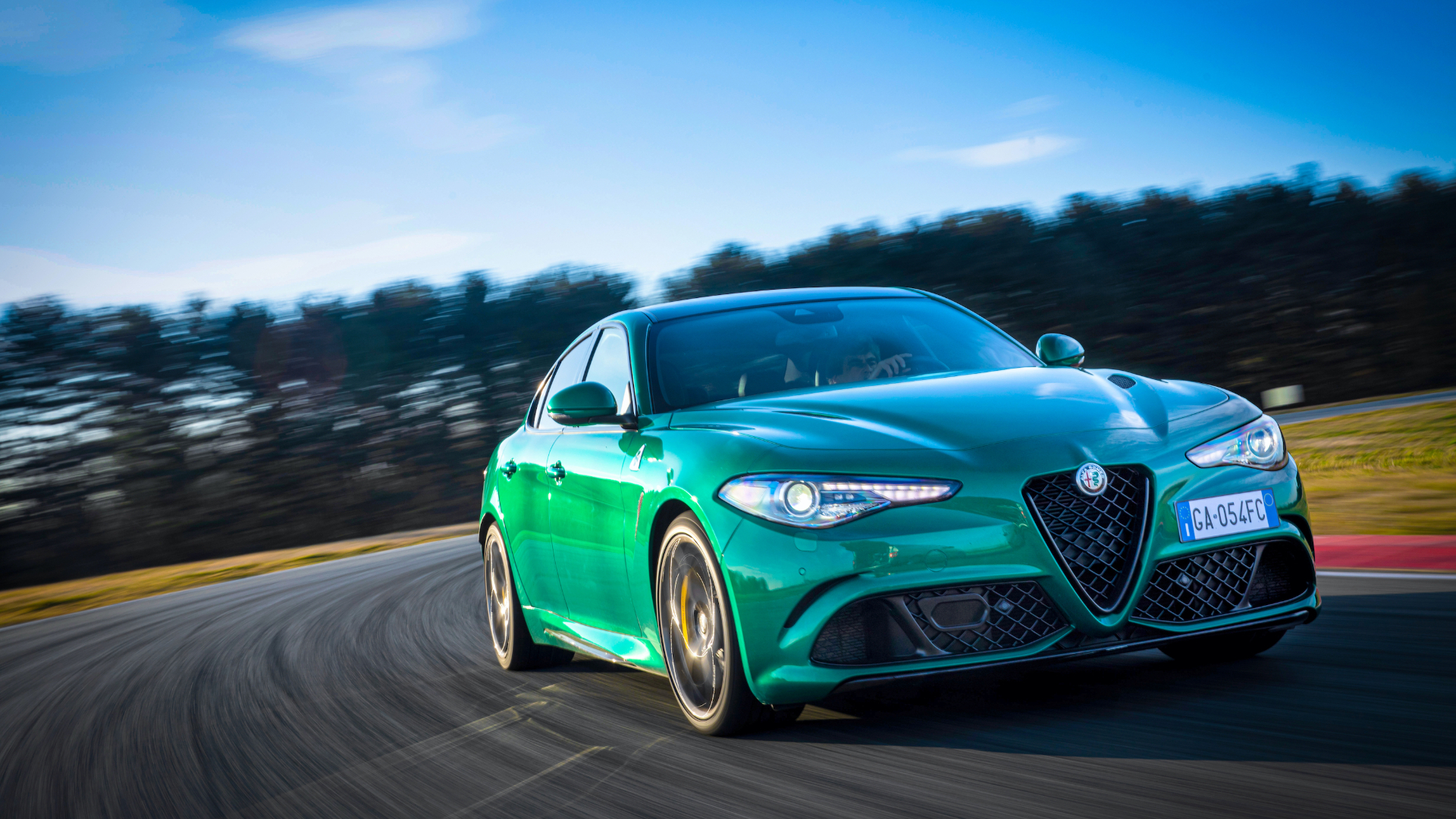 Being an Alfa Romeo enthusiast – one of the Alfisti – is a bit like being a Crystal Palace fan. There are moments of hope and rare bursts of brilliance, mixed with regular let-downs and long periods of weary resignation.

Alfas, with very few exceptions, always look fantastic. But the classics dissolve like bath bombs at the first hint of rain, while the moderns are mostly dressed-up Fiats: unreliable and disappointing to drive.

This car, though, is different. It has a Ferrari engine with two cylinders lopped off. It has a ‘Race’ mode next to the gear selector. It has a carbon fibre bonnet and roof, active aerodynamics and (optional) carbon-ceramic brakes.

And it hits 62mph faster than you can say ‘Alfa Romeo Giulia Quadrifoglio’. 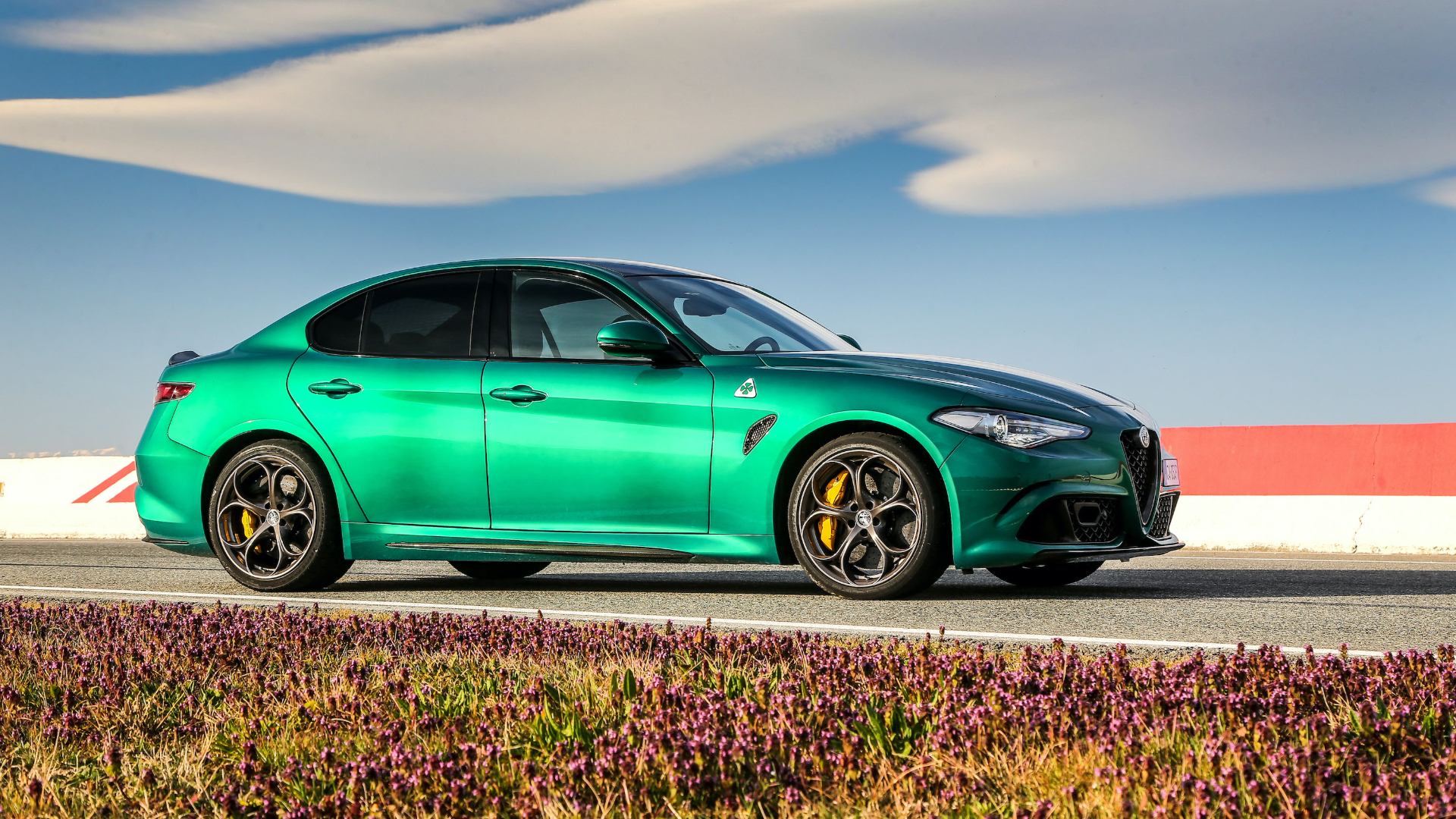 The Quadrifoglio (‘four-leaf clover’ in English) is Alfa’s £65,555 flagship. On paper at least, it’s a bona fide super saloon, a car with BMW M and Mercedes-AMG locked in its crosshairs.

It certainly looks the part, with gaping air intakes, 19-inch Teledial alloys, a bare carbon spoiler and four fat tailpipes – but you’d expect that. What matters is how it drives.

I’ll level with you: this is one of those ‘burst of brilliance’ moments. On the right road, the Giulia is simply sensational: a four-door Ferrari that leaps balletically from one bend to the next.

It’s brutally quick, yet finely balanced, with supple suspension that soaks up the worst British roads can throw at it. 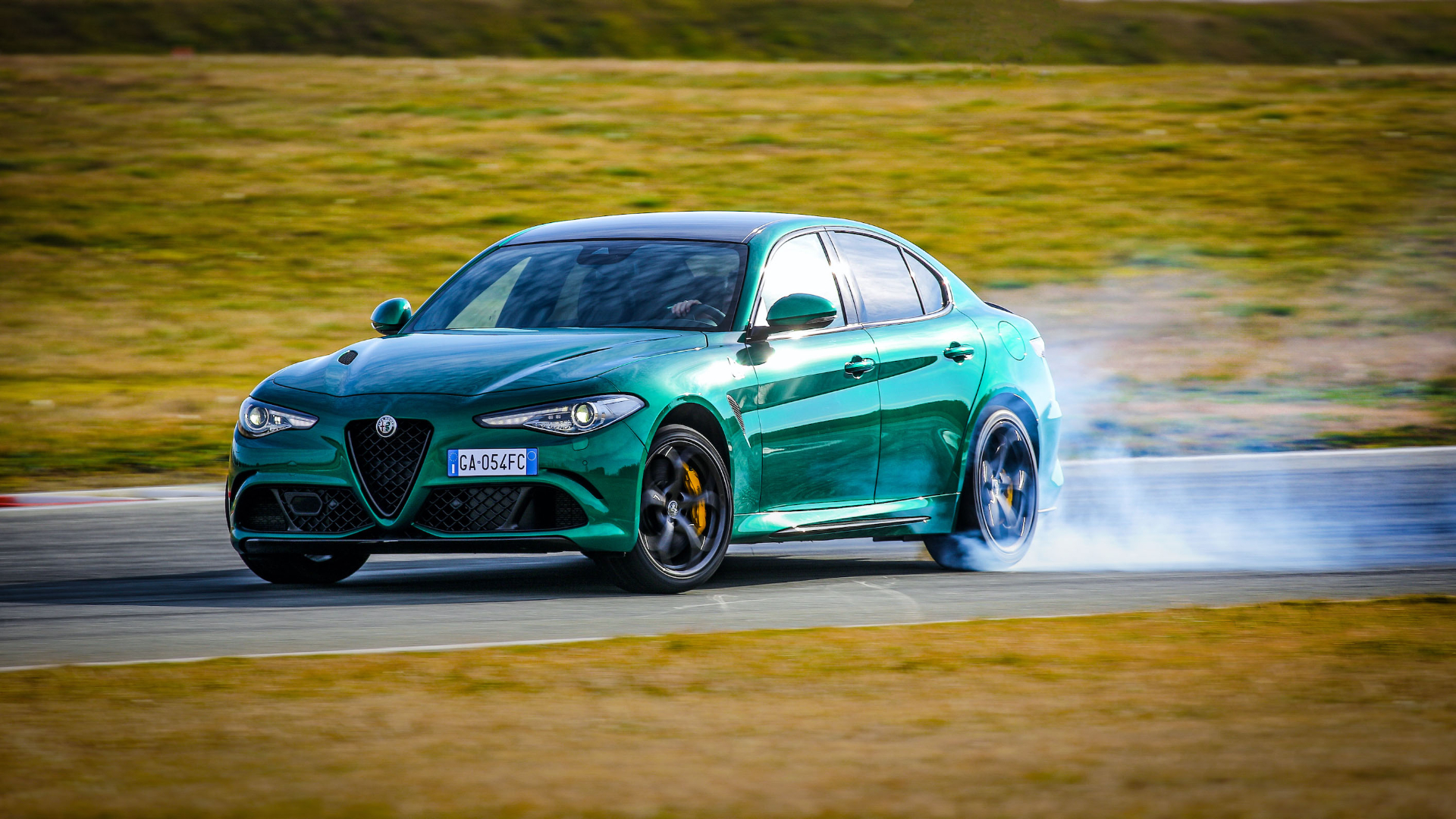 Clearly, with 510hp coursing through the rear tyres, lurid oversteer is never more than an indelicate prod of the throttle away, but the Alfa never feels unruly or intimidating. It’s more ‘sports car’ than ‘muscle car’ – unlike some of its rivals.

The 2.9-litre twin-turbo V6 makes a gruff growl, augmented by pleasing pops from the exhausts in Dynamic and Race modes. It’s no high-rev screamer, but there’s immense mid-range punch; few cars overtake so briskly and decisively.

One is *slightly* quicker than the other. pic.twitter.com/Ori8bjQuNg

The eight-speed automatic gearbox is smooth and intuitive – even if you’ll prefer to take control manually using the huge Lamborghini-style paddles.

The mega-Giulia isn’t perfect, of course. Its steering is rather light and flighty for my taste – much like most recent Ferraris, in fact. And the carbon brakes feel strangely wooden at low speeds, making them a £5,500 option you can probably do without. 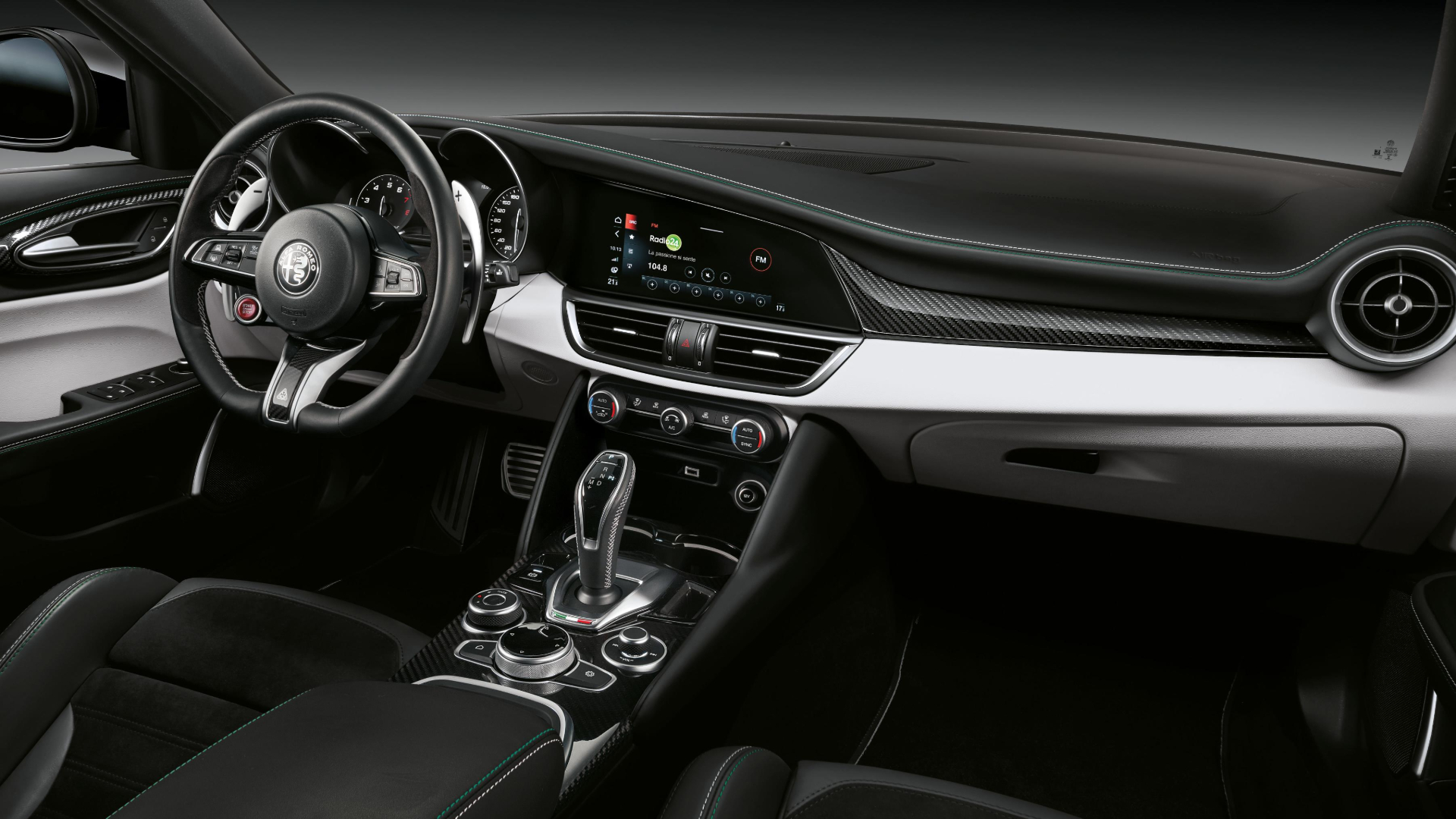 Also, while the carbon-backed Sparco bucket seats – themselves a £3,250 option – look fantastic, the rest of the interior is a mixed bag. At least Alfa Romeo has improved the infotainment system for 2020, with standard Apple CarPlay and Android Auto connectivity.

There’s also the spectre of unreliability. Mid-way through its week in our care, the Alfa mysteriously flattened its battery and refused to unlock via the remote. A call to the AA sorted it, but I can’t help wondering if the old clichés still have some truth.

So, this is a car you buy primarily with your heart rather than your head. But it was ever thus with Alfa Romeos, and this one tugs at the heart-strings much harder than most.

I’d still plump for the rather more mainstream Mercedes-AMG C 63 S, but buy the Alfa and you’ll earn my unqualified admiration and respect. 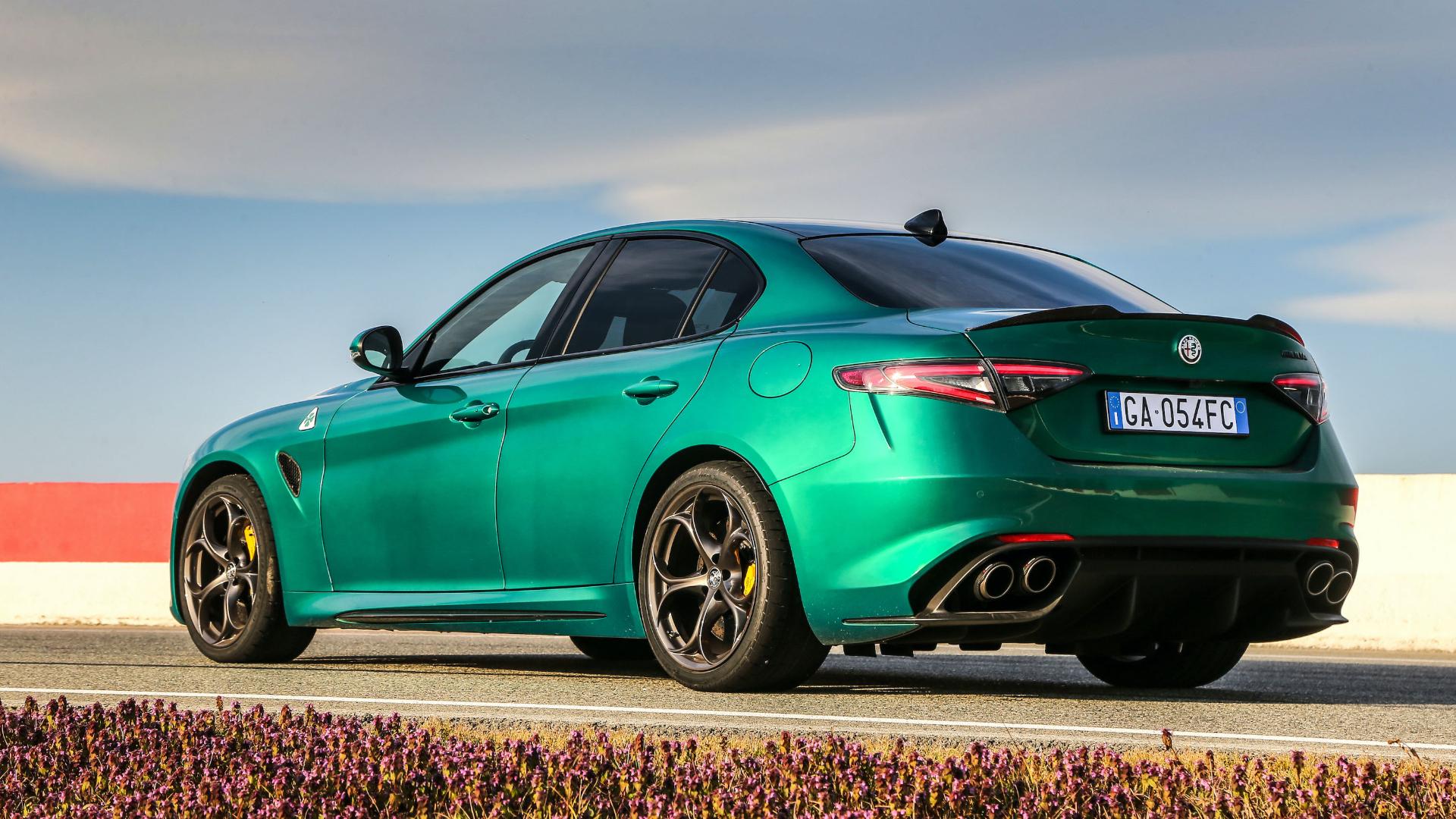 There’s no doubt what the middle-aged gent who collects the keys would choose. As we both stare wistfully at the Quadrifoglio, he tells me he’s owned no less than six Alfas over the years. “This is something else,”, he says, “I think it’s the greatest Alfa Romeo ever made.”

With cars like the 33 Stradale, Montreal and Alfasud in the back-catalogue, that’s a bold statement. But, you know what, I think he may be right.

Does turning the clocks back cause road traffic accidents?

RoSPA is calling once more for the clock change to be scrapped, claiming darker evenings are directly related to more accidents.
Read more

From Santa Fe to California: cars named after places

A list of 10 cars named after towns, cities and islands from around the world
Read more

ADAC average results indicate new Euro 6d diesels are over eight-times cleaner than the on-road standard, as recorded over a variety of tests
Read more