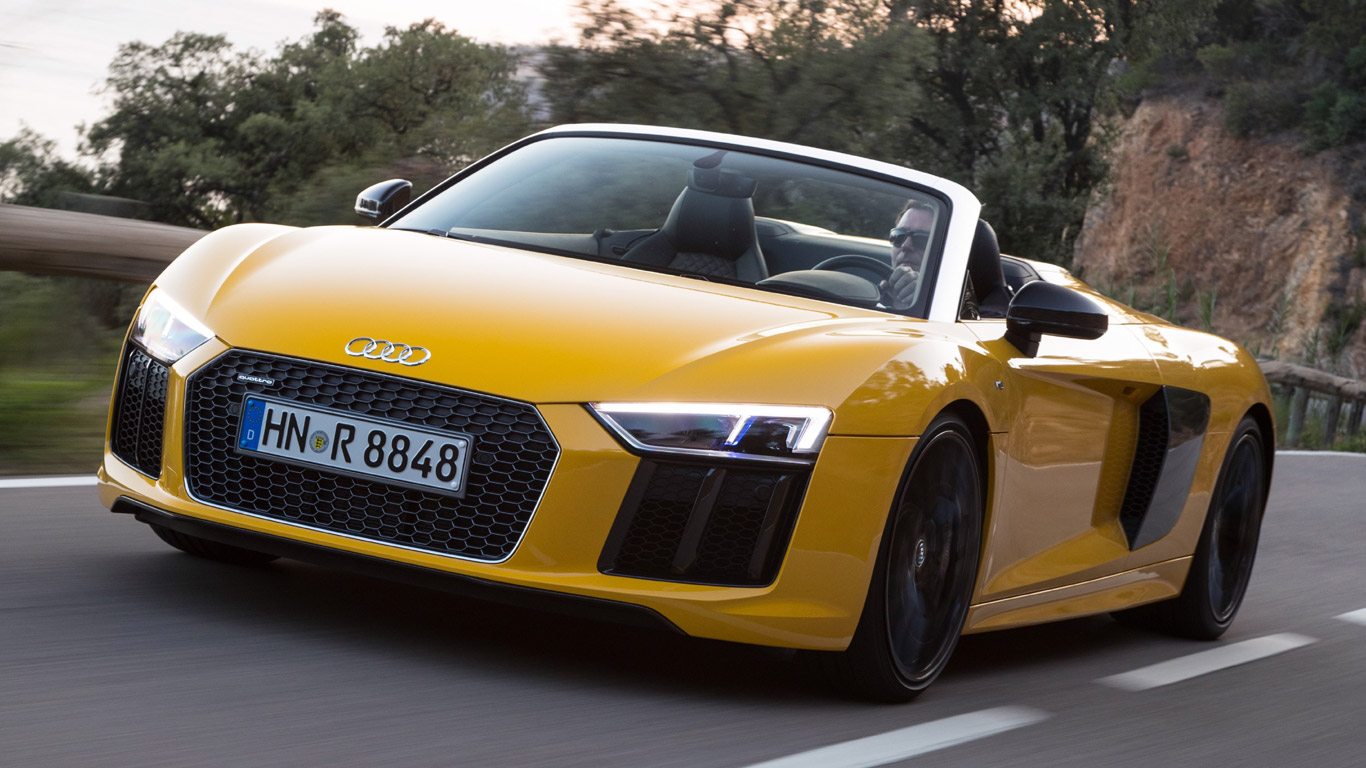 Soft-top supercars aren’t for everyone. Floppier and slower than their coupe counterparts, some petrolheads value crucial tenths of a second on the 0-62mph run over the ability to enjoy the sun without a roof blocking its rays.

But for those of us who want to make the most of a barking V10, Audi has launched a soft-top ‘Spyder’ version of its R8 supercar. And we’ve been to Spain to try it out.

First revealed at this year’s New York Auto Show in March, we’ve finally got behind the wheel of the R8 Spyder before deliveries start in December. Essentially the same as the coupe, Audi has resisted the urge to fit a retractable hard-top to the open R8.

Why does it use a soft-top?

Using a fabric roof rather than a clever retractable hard-top might seem a strange move for a car that costs close to £130,000. But it’s all about those crucial kilos – the R8 Spyder weighs 1,612kg. While you’d certainly feel it running over your toe, it’s only 17kg more than the coupe. That’s the equivalent of carrying a four-year-old passenger.

Hit me with some figures 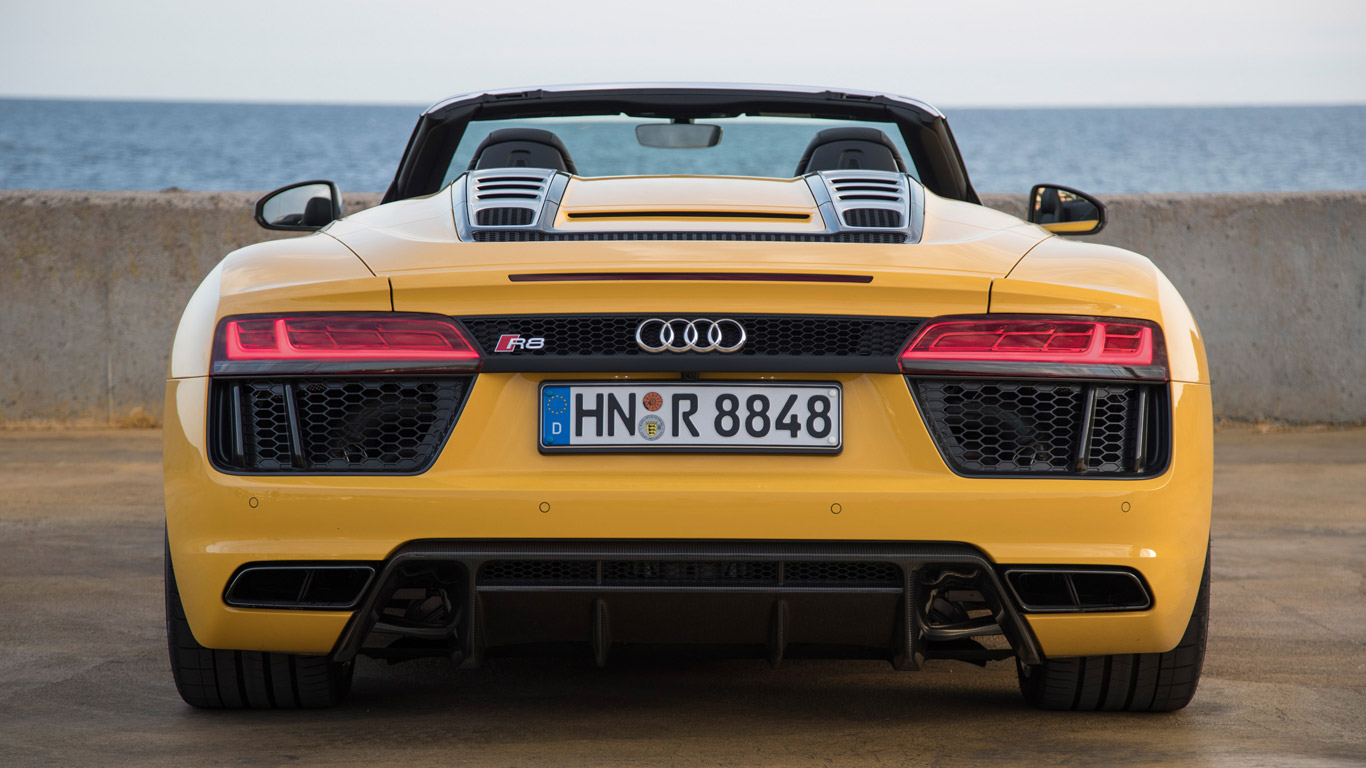 So the stats: that wonderful naturally-aspirated 5.2-litre V10 produces 540hp and will propel the R8 Spyder to 62mph in 3.6 seconds. That’s a tenth of a second slower than the coupe. Meanwhile, it maxes out at 197mph (2mph slower than the hard-top).

It’s a bit slower then?

Yes, it’s marginally slower than the coupe on paper. But in reality? You’re really not going to notice the difference. At any revs, mash the accelerator and the R8 Spyder surges forward as you’re pushed back into your seat. Push it more and you start to worry that your insides are being left behind. It’s fast.

Does it sound good?

An advantage of chopping the roof off is being able to hear that naturally-aspirated V10 do its business. The sound is incredible: a satisfying ‘bwaaaaarrrrppp’ as you work through the gears (using the steering wheel paddles is equally satisfying). Lift off, with the ‘Dynamic’ Drive Select mode, er, selected, and the exhaust in sporty mode, and it’ll make pops and bangs and cracks. It’s brilliant, but could scare elderly people and children.

Can I still hear the radio? 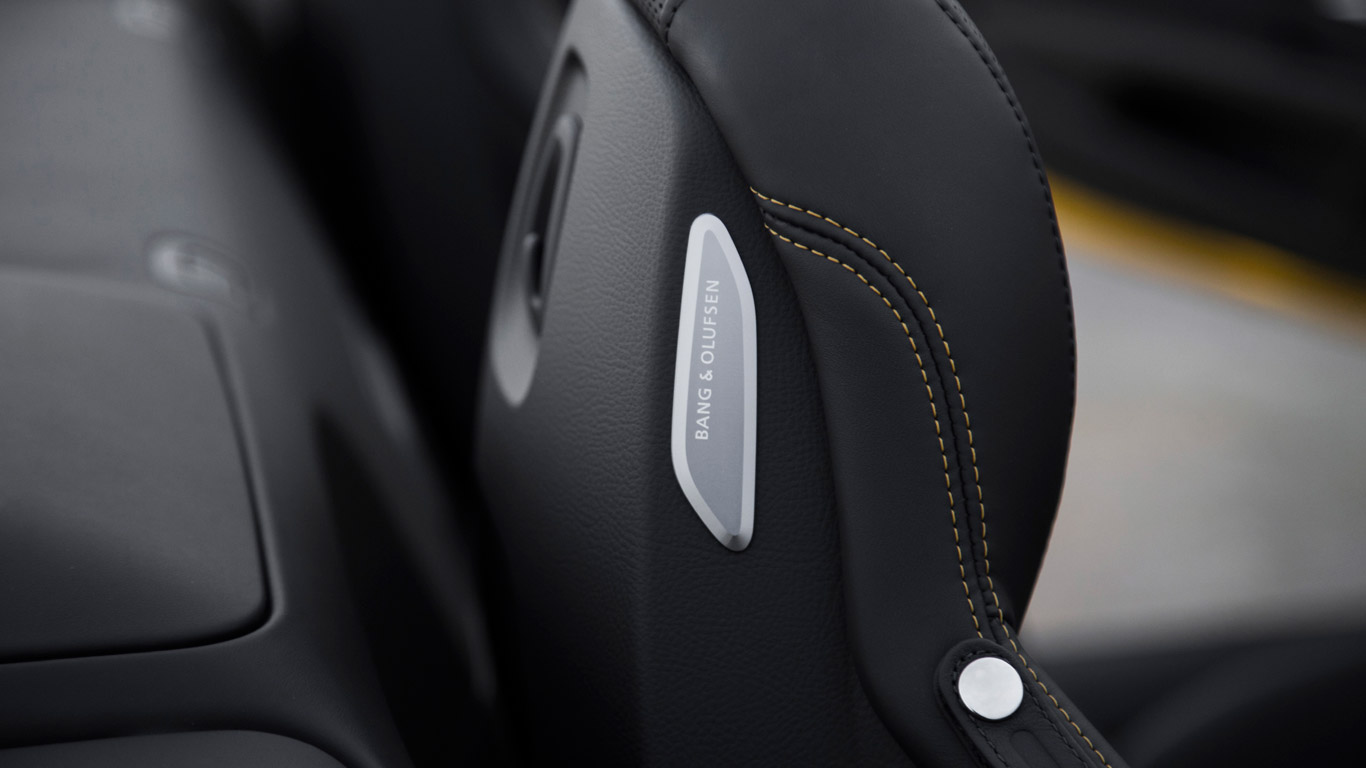 Our test car was fitted with the optional Bang & Olufsen sound system, which uses speakers in the headrests to make sure you can always hear your favourite tunes. It sounds brilliant, even above the noise of the engine popping and banging.

Tell me about the four-wheel-drive system

The R8 uses Audi’s Quattro four-wheel-drive system, with power going to all four wheels via a seven-speed S tronic paddleshift gearbox. Drivers can toggle between modes in the Drive Select menu.

How good is it at stopping?

As standard, the R8 Spyder comes with 365mm brake discs on the front and 356mm on the rear. The stopping power’s more than adequate, despite the weight (and performance) of the R8. If you’re planning to take it on track days, you can opt for carbon ceramics. 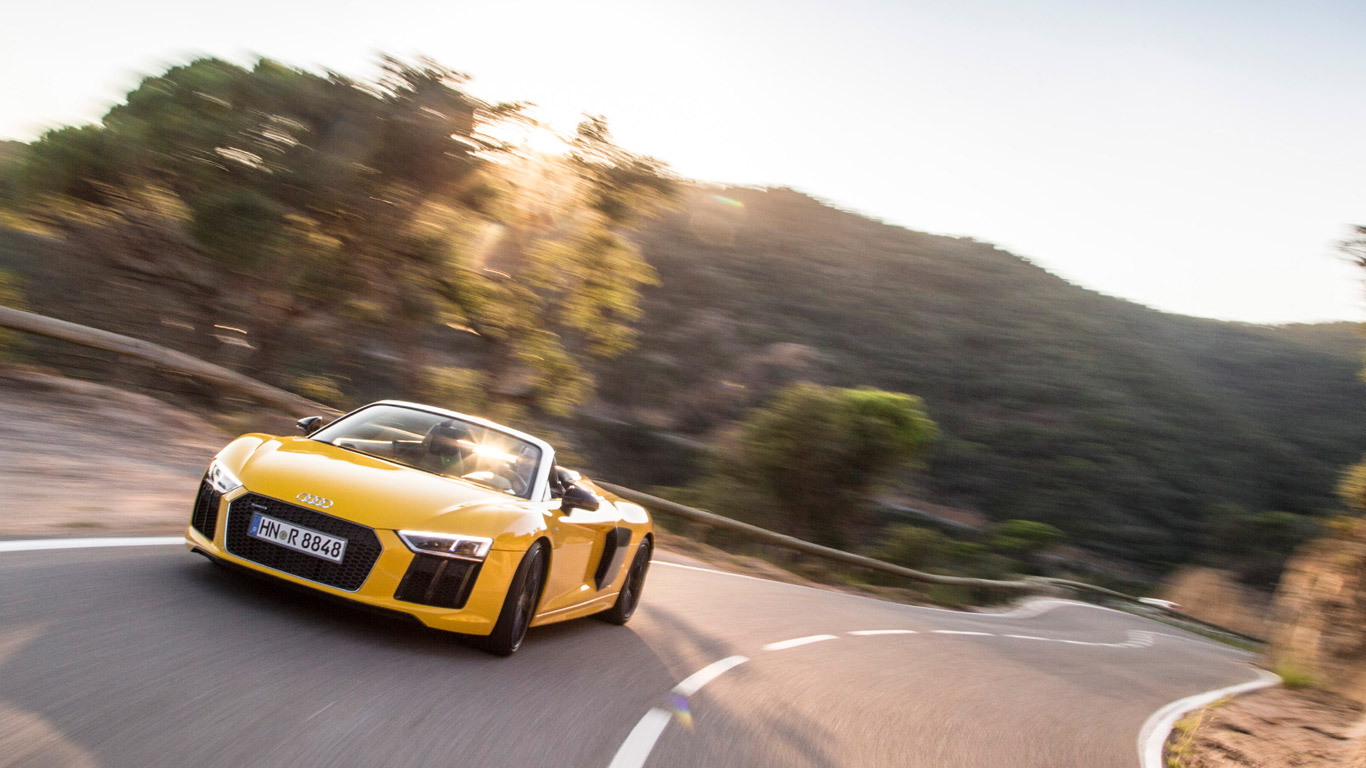 If you wish, you can opt for 100% of the R8’s power to go to the rear wheels. While we’ve got no doubt some spirited driving on track could get the back end out, in real-life driving conditions it feels very planted. Which is a good thing, most of the time.

With just two seats, the Audi R8 doesn’t even pretend to be a practical family car. But if there’s just two of you, the cabin is easily comfortable for a pleasant European road trip. You’ll have to pack light to fit your luggage in the boot, mind: there’s just 112-litres of space in there.

The lovely thing about the Audi R8 Spyder is, despite its immense capabilities, it’s not at all intimidating to drive. We had the pleasure of threading it through Barcelona’s rush-hour traffic, and it felt just as happy as a TT or even an A4. Even a supercar virgin could drive this every day.

But that means it could feel a tiny bit more special 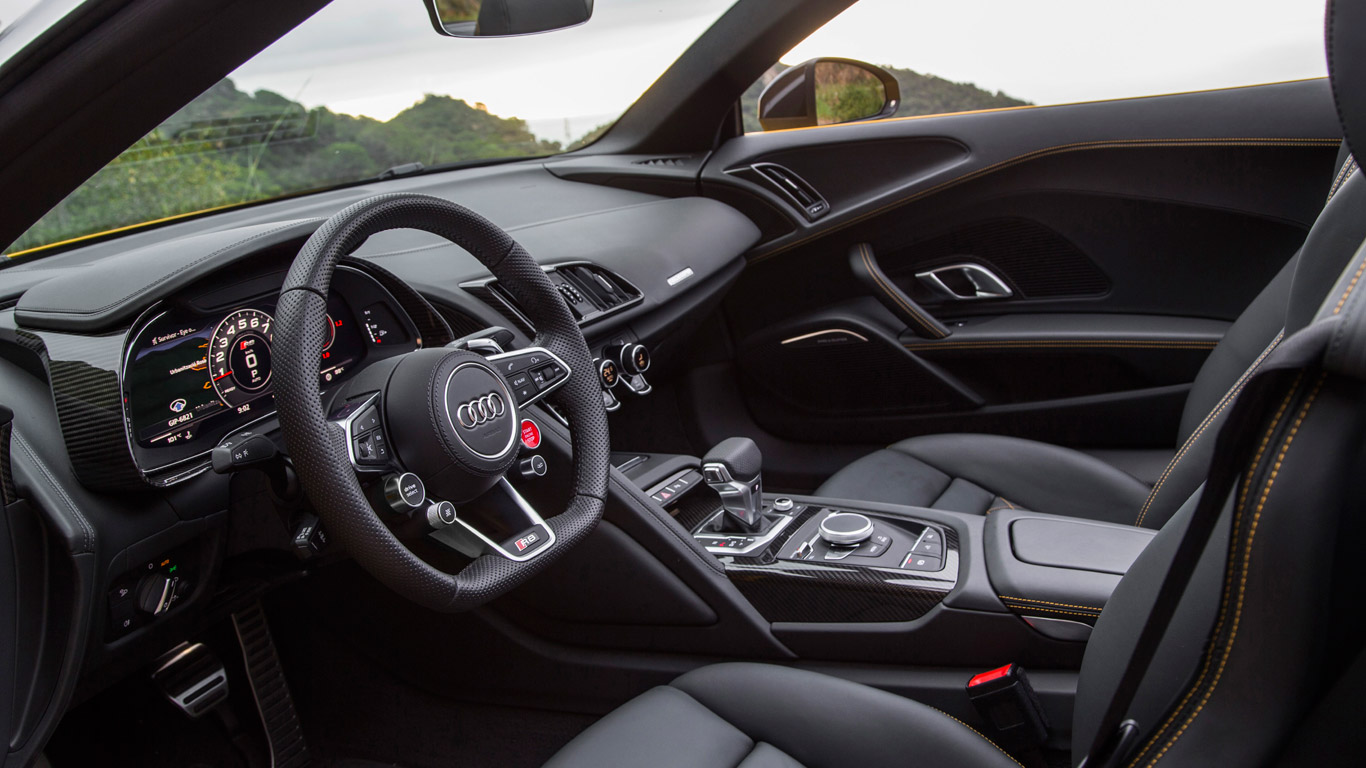 Yup, it’s a common trait of fast Audis. They’re always incredibly quick, but not quite as special or emotional as rivals from, say, Ferrari. But the latest R8 Spyder does excite us more than its predecessor, and it attracts a huge amount of attention. You’re not going to go unnoticed in one.

And it is a bit wide

At 1,940mm wide, the R8 Spyder is 60mm wider than a 911 Turbo and 36mm wider than its predecessor. On the right roads, cliche alert, it does shrink around you, but you are aware of its width in traffic.

Can I get an R8 Spyder Plus?

Although you can get the regular R8 in ‘Plus’ guise, packing an extra 70hp and hitting 62mph in 3.2 seconds, Audi hasn’t suggested it’ll offer a hotter Spyder model. Frankly, the regular one is fast enough for us. 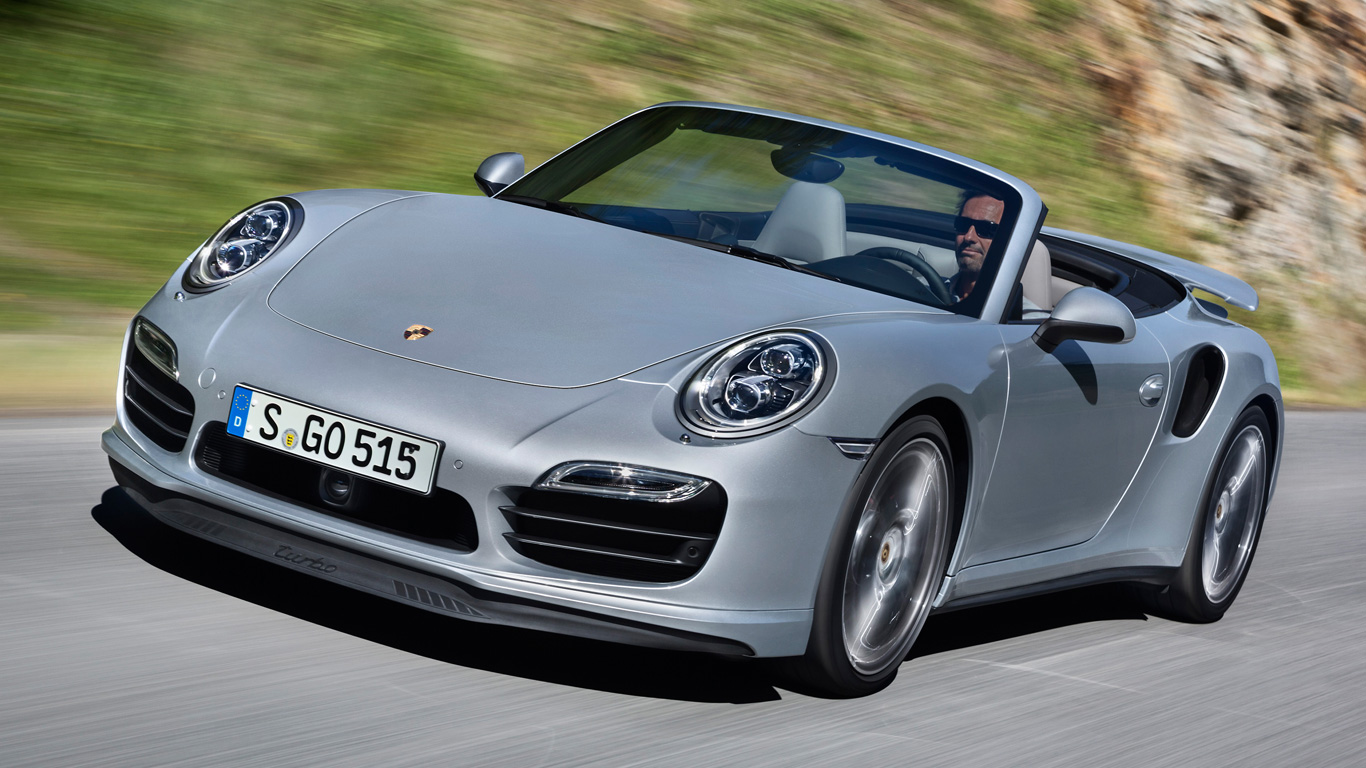 The Audi R8 Spyder is squaring up against the Porsche 911 Turbo Cabriolet, which starts at £135,766 and matches the R8 for power. It hits 62mph half a second quicker, but many will prefer the R8’s image to the almost drab 911.

And there’s the Lamborghini…

There’s also the technically-very-similar Lamborghini Huracan Spyder, which shares the Audi’s platform and engine. That’s got more power, though (610hp) but it’ll cost you a staggering £205,000. We’d take the Audi.

Will it cost a fortune to run?

It goes without saying, if you’re looking at buying a V10 supercar, you’re going to need deep pockets to run it. But comparatively, the R8 does OK on the green front. Cylinder-on-demand tech has helped to reduce CO2 emissions by 10.6% compared to its predecessor, while fuel economy is improved by 13.7%. 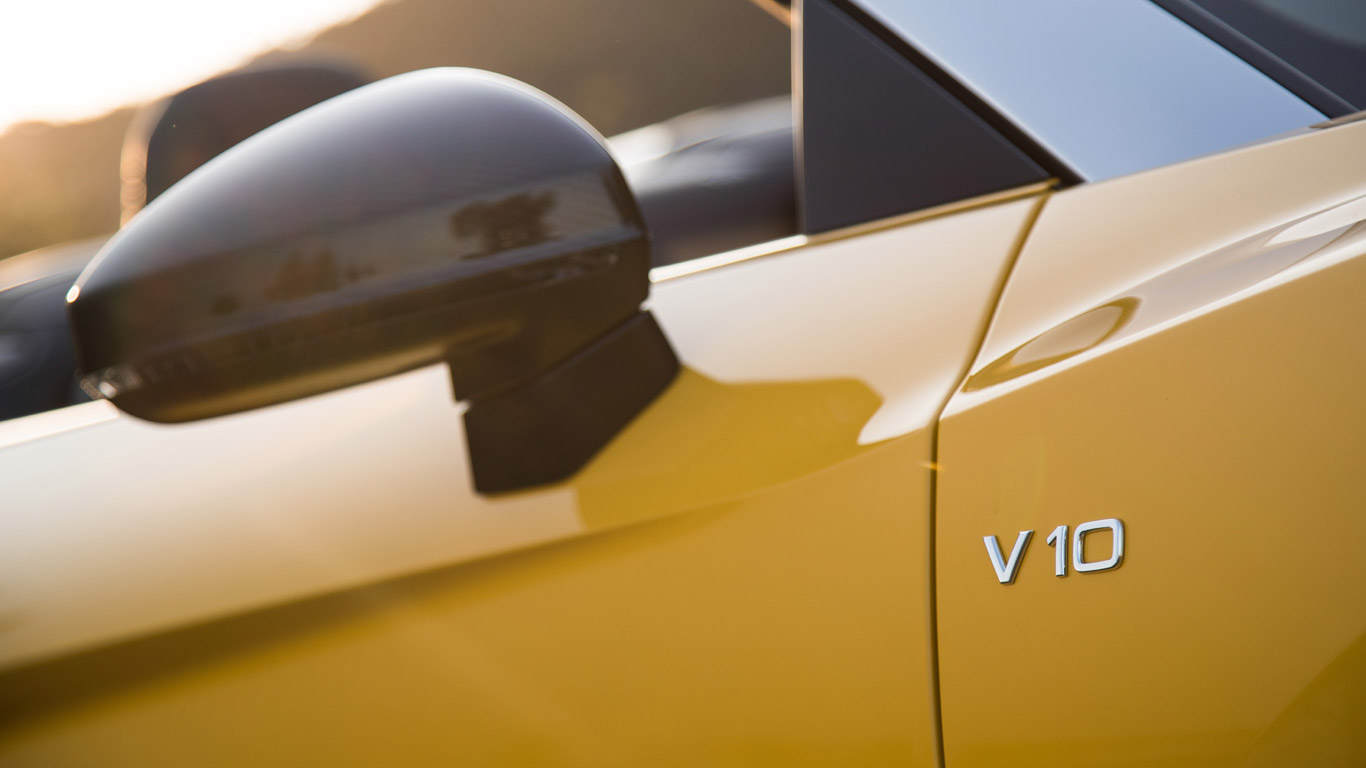 If you’ve got a spare £130,000 to splash on a two-seat soft-top, we’d be heading straight to our nearest Audi dealer. Sure, the Porsche badge might have a little more cachet, but the incredible capability of the R8 Spyder, combined with its usability, means we’d be very happy to give one a home.