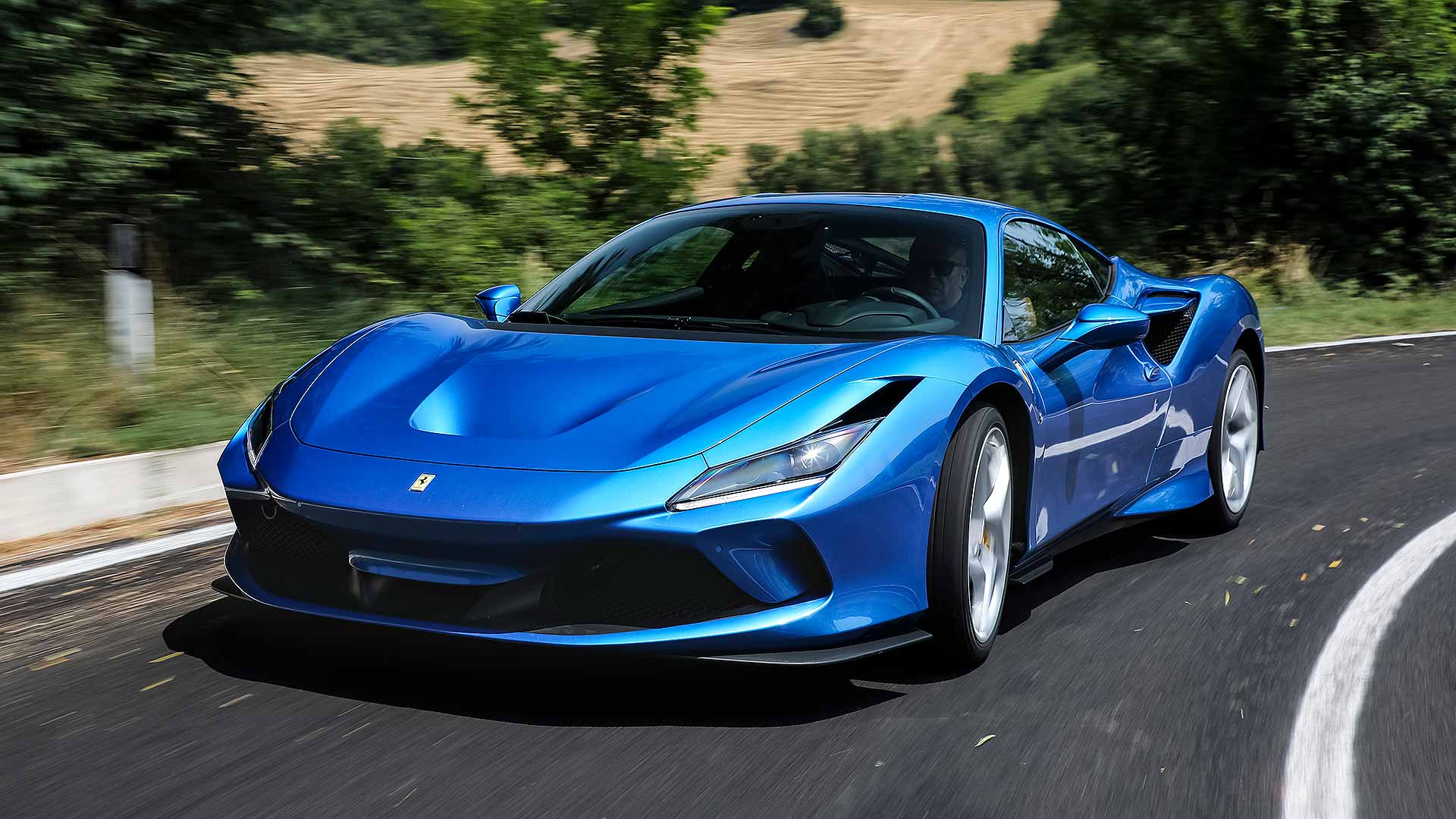 Ferrari F8 Tributo: what a fitting name. Experts have voted this car’s V8 turbo the best engine of the past 20 years. The F8 Tributo celebrates that by being perhaps the greatest V8 Ferrari sports car in almost half a decade. Could it also be the last, the end of an era?

If so, it’s going out on an incredible high.

With its predecessor, the 488 GTB, Ferrari built upon the acclaimed 458 Italia with a clean-sheet turbocharged engine. Enthusiasts panicked that something might have been lost – until they drove it. Sure enough, it was the real deal, and the awards started coming (to date, the motor has won 15 ‘engine Oscars’). The F8 Tributo? It’s aiming at perfection. 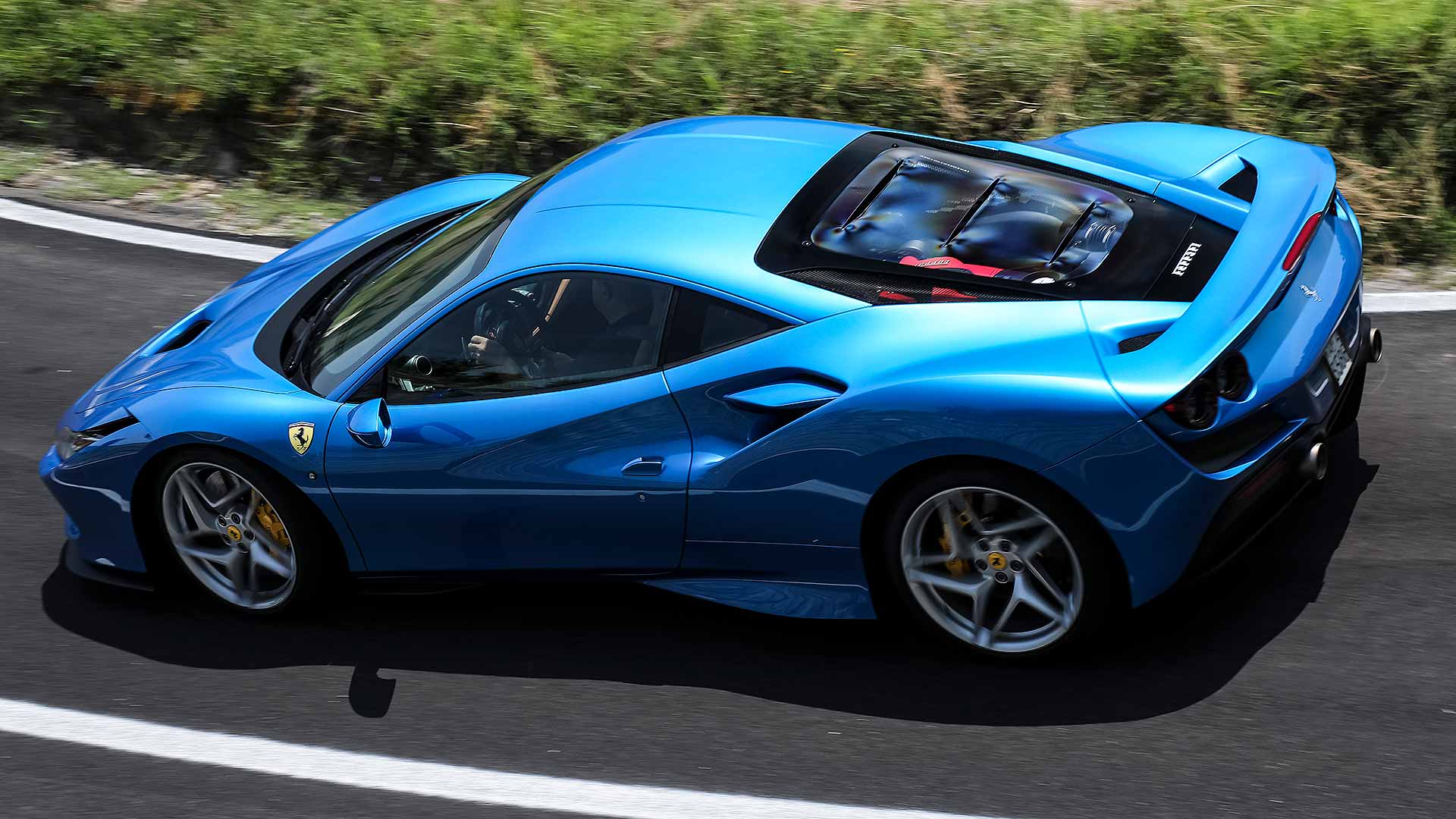 On the road, it delivers. This is a divine car to drive. With 720 horsepower, it is eye-poppingly fast, and new acoustics in the engine bay mean it sounds rich and increasingly glorious as the revs rise. It will do 0-62 mph in 2.9 seconds and reach 211 mph flat-out. But the depth of feel, feedback, precision and confidence it delivers makes it a brilliantly natural, organic supercar to drive. No matter what speed you want to drive, it is a treat, not a terror. 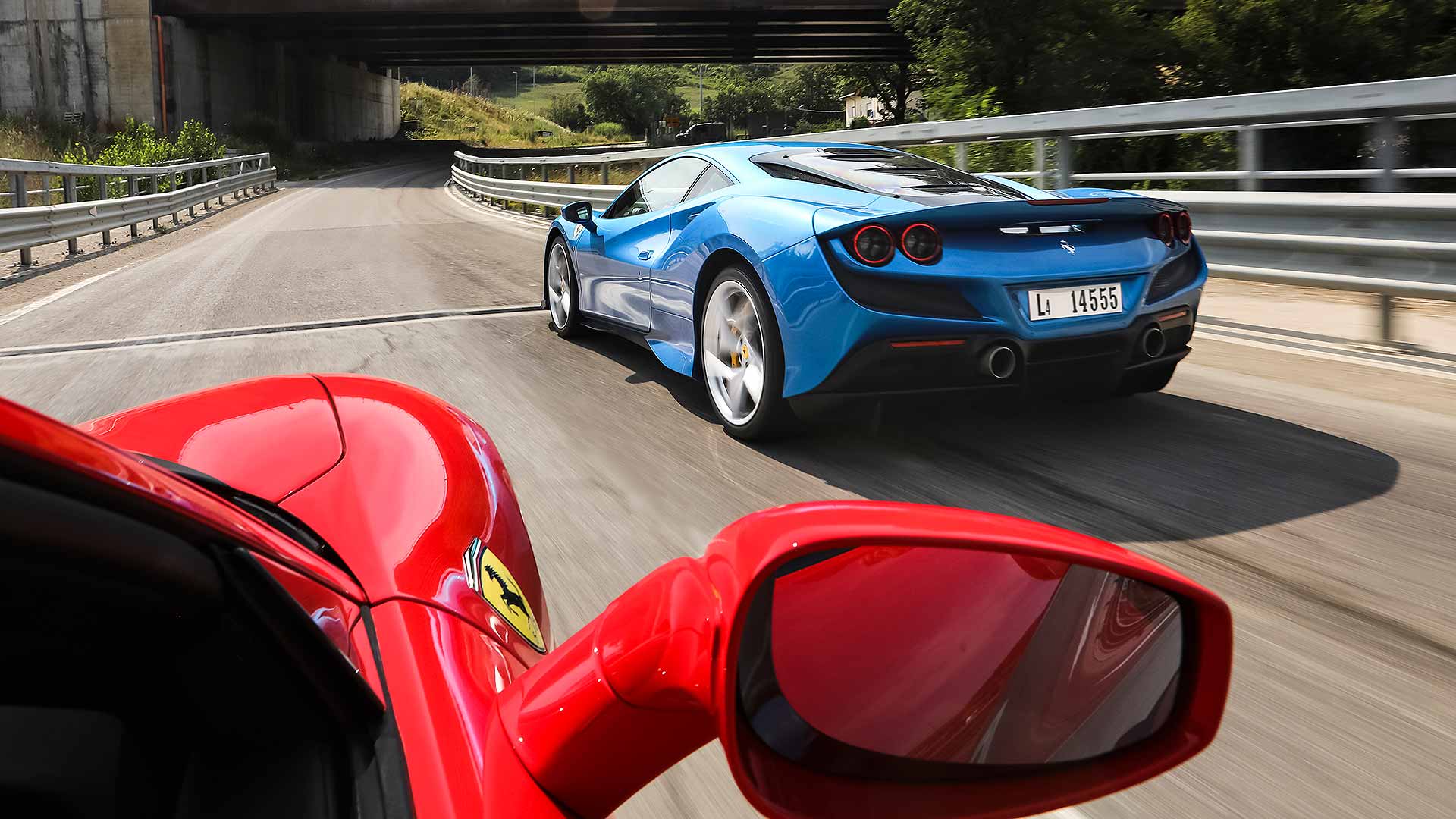 This is all the more remarkable because the engine is the most powerful V8 Ferrari has ever built. Pound for pound, there is not a series production V8 on the planet that gives a bigger bang for buck than this 3.9-litre V8. And, despite being turbocharged, the response to the accelerator is virtually instantaneous. It is deeply satisfying, and a testament to a mind-boggling degree of engineering development by Ferrari boffins.

Yes, a non-turbo V8 will ultimately be that bit sharper and more visceral, but it simply can’t serve up such breadth of power as this turbo. Nor its sheer peak of power, nor its charming drivability. Overall, it’s simply better, period. 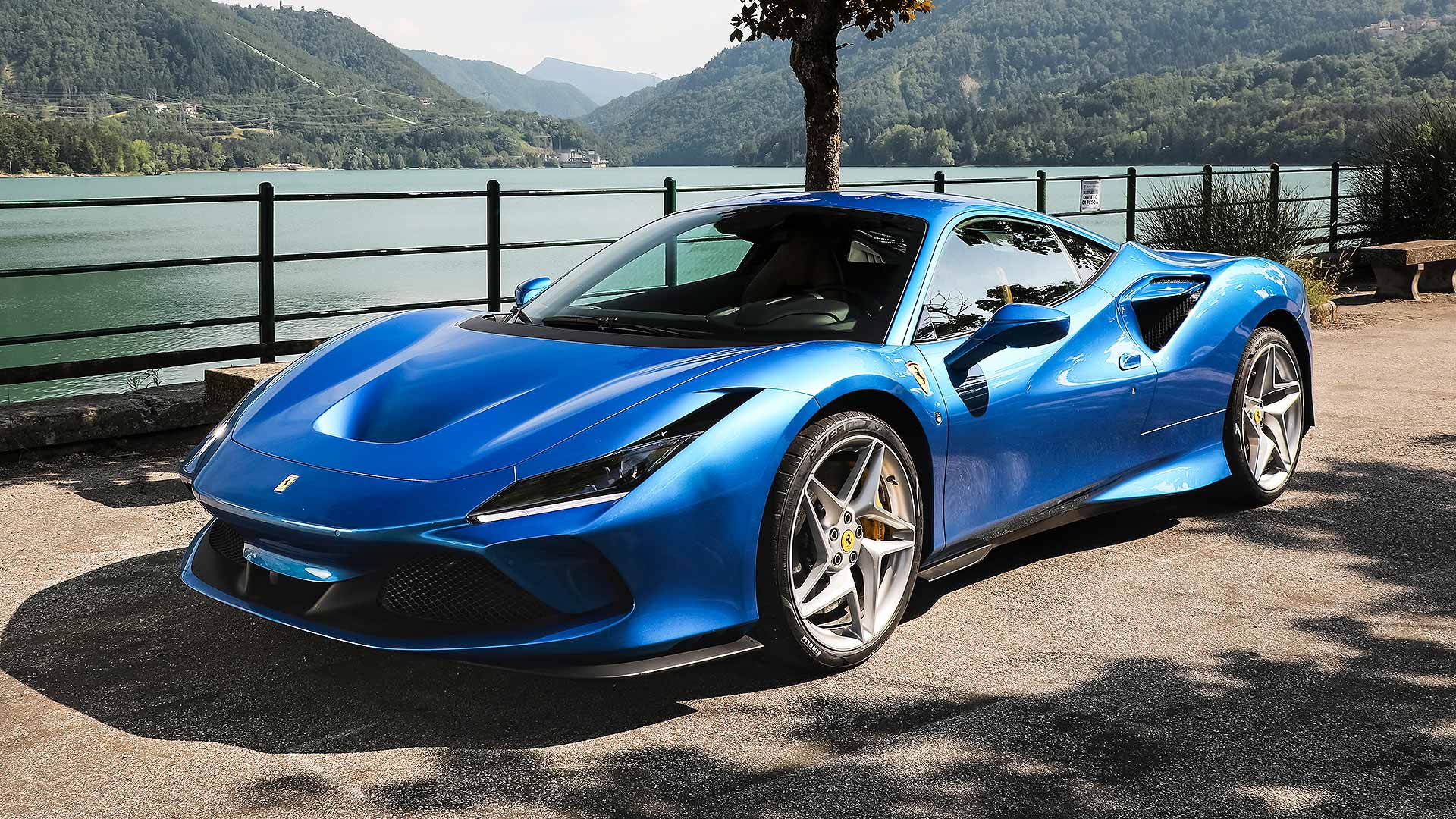 You shouldn’t mistake it for a 488 GTB on the road. The curvaceous lines have crisper details, slimmer headlights (air is now channelled above them), a bold central ‘S-duct’ air intake inspired by F1 aerodynamics. The side air intakes are bigger; the engine now ingests its air from new intakes built into the full-width rear wing. It is an organic classic, in contrast to edgier and more aggressive rivals.

At the rear, there’s an added treat: the engine cover is now plastic, with three open slats, modelled to mimic the famous Ferrari F40. It’s a cool retro touch and the perfect way of showcasing in full the engine in all its glory. 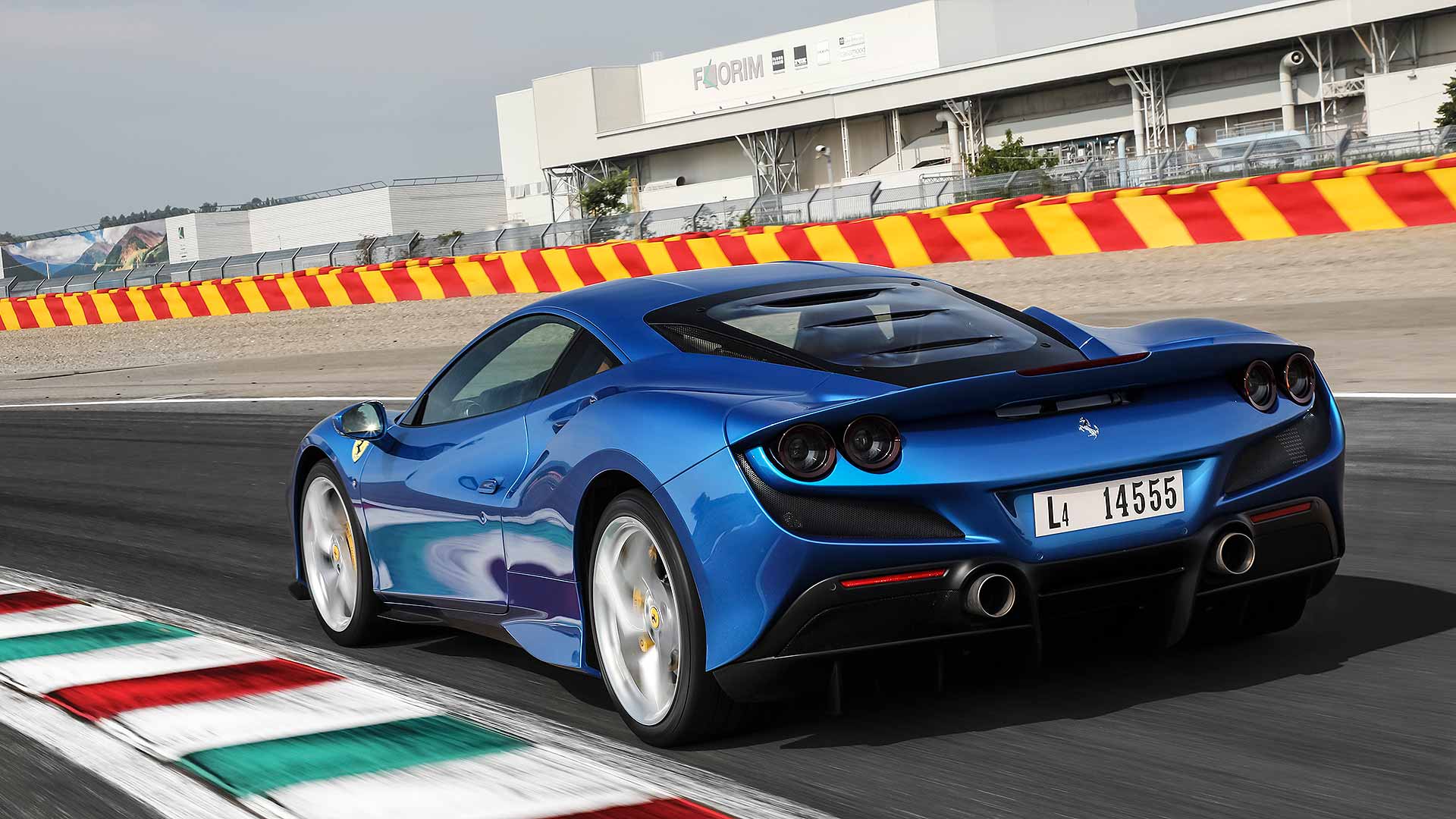 And the heart of it is the mid-mounted 8-cylinder engine. Ferrari built an extreme version of the 488 GTB, called the 488 Pista: 50 percent of the internal components were new. The F8 Tributo engine has even more new parts, including many derived from the 488 Challenge racing car, to not only produce colossal power, but also deliver it in a linear way that builds in intensity as revs increase. It is even more efficient when you reach the rev limiter: a new ‘wall effect’ strategy means it cuts off right at the 8,000rpm red line, rather than gently fading as it is reached. This is ridiculously pleasurable. 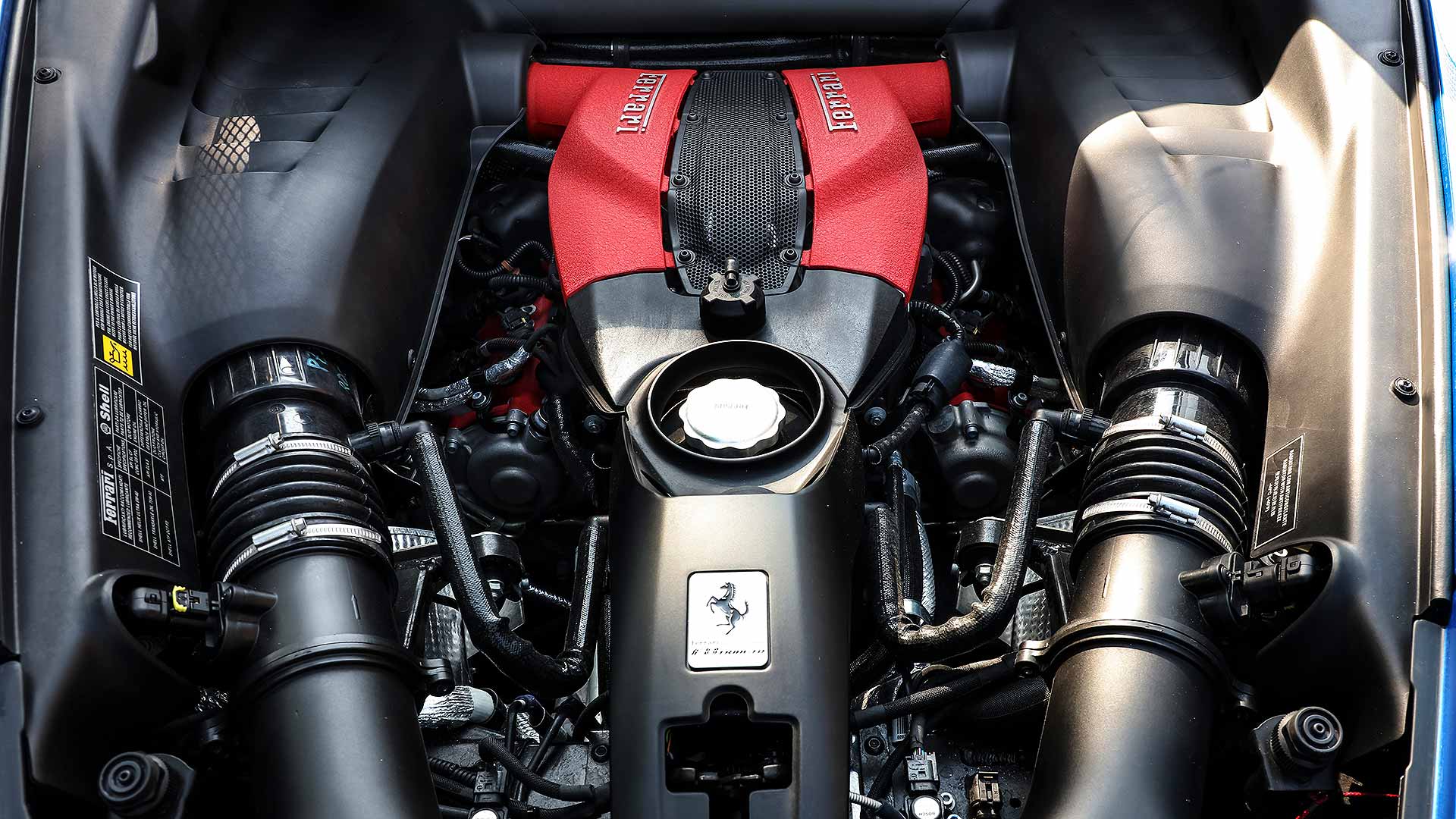 You even have a choice of picking the top plenum covers in classic crackle-finish red, or smooth carbon fibre. Red for us, please.

In the future, cars like this might be hybrids, with downsized V6 turbo engines or similar. This model is still the cleanest Ferrari ever, though: it meets the latest exhaust emissions regulations that stipulate it produces 90 percent fewer pollutants than the 488 Pista. It even has an exhaust particulate filter to almost fully filter all pollutants. (But don’t worry, a redesigned exhaust mean it is up to 5dB louder than the 488 GTB inside the cabin. It sounds magnificent.) 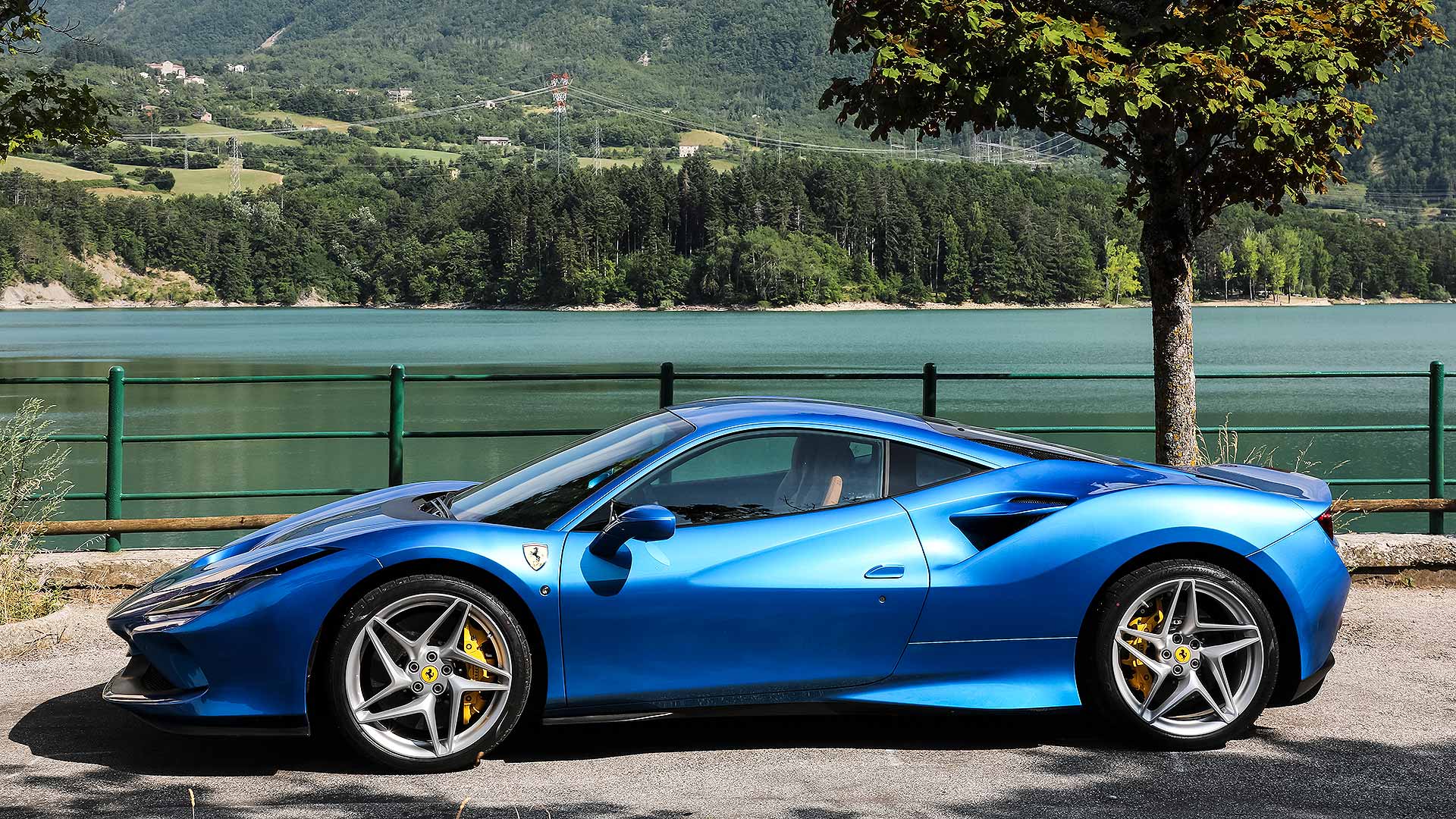 And now for the science bit. What makes it so good to drive? Here is the acronym every F8 Tributo fan needs to know.

FDE+. It’s an acronym pivotal to the F8 Tributo’s talents. In cornering, Ferrari Dynamic Enhancer Plus works by carefully managing brake pressure to balance the car and give confidence-boosting control. Sounds simple; is actually ferociously complex. It was first used on the 488 Pista for extreme sporty driving with many of the car’s safety assist systems disabled. On the F8 Tributo, it has been extended, to the fast-road ‘Race’ setting on the steering wheel Manettino dial.

It essentially acts as a dynamic stabiliser: it gives ordinary drives the sense of having car control like F1 winner Charles Leclerc. Whatever your level of talent, it enhances it, and gives you the confidence to press further: it’s so effective, it makes even a pro driver 6 percent faster coming out of bends, according to Ferrari’s own figures – with 30 percent less steering activity, or ‘fighting at the wheel’.

Rather brilliantly, Ferrari’s own official technical literature says FDE+ will make drivers more skilled and “more confident in lengthy oversteer manoeuvres”. A day’s testing of the new F8 Tributo in Italy included some laps at Ferrari’s famous Fiorano test track. The sighting laps with a pro driver terrified me: it is a fast place. But within half a lap, I was up to speed, and within two laps, tweaking the car’s rear end out of corners.

This is proof of how effective the FDE+ tech really is. 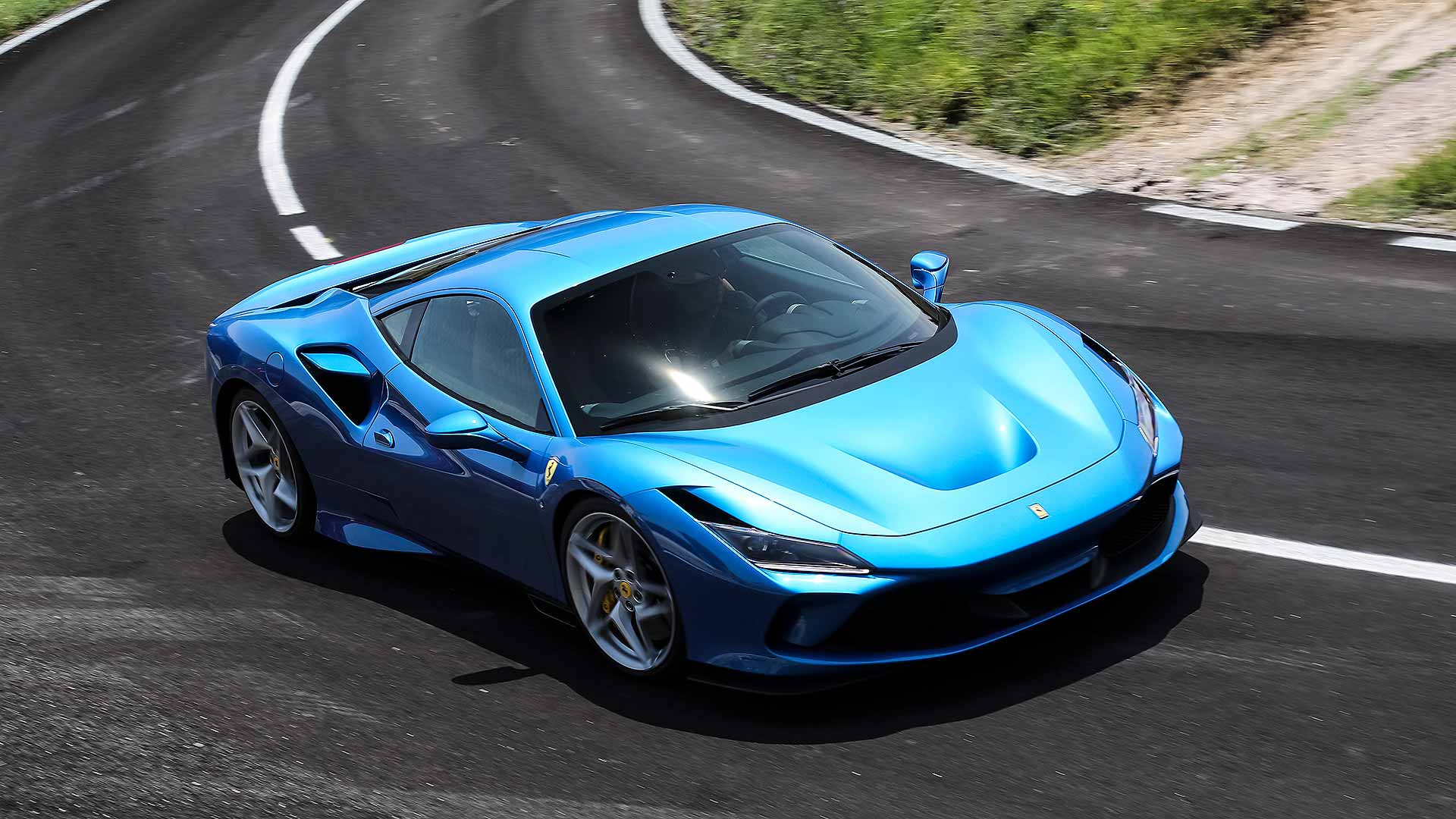 But what about on the road? Here’s where Ferrari’s many other developments come to the fore. Counterintuitively, it has more downforce, but is 10 percent more aerodynamically efficient: it’s slipperier through the air, but more planted onto the road. The technical details of all the work done to the F8 Tributo’s aerodynamics is mind-boggling, but the confidence you immediately feel on the road is proof it all works.

Patented technology features at the rear – the blown spoiler. First seen on the 488 GTB, and made more extreme for the 488 Pista, it is further developed here to give a 25 percent boost in downforce – where it matters, at the rear end. 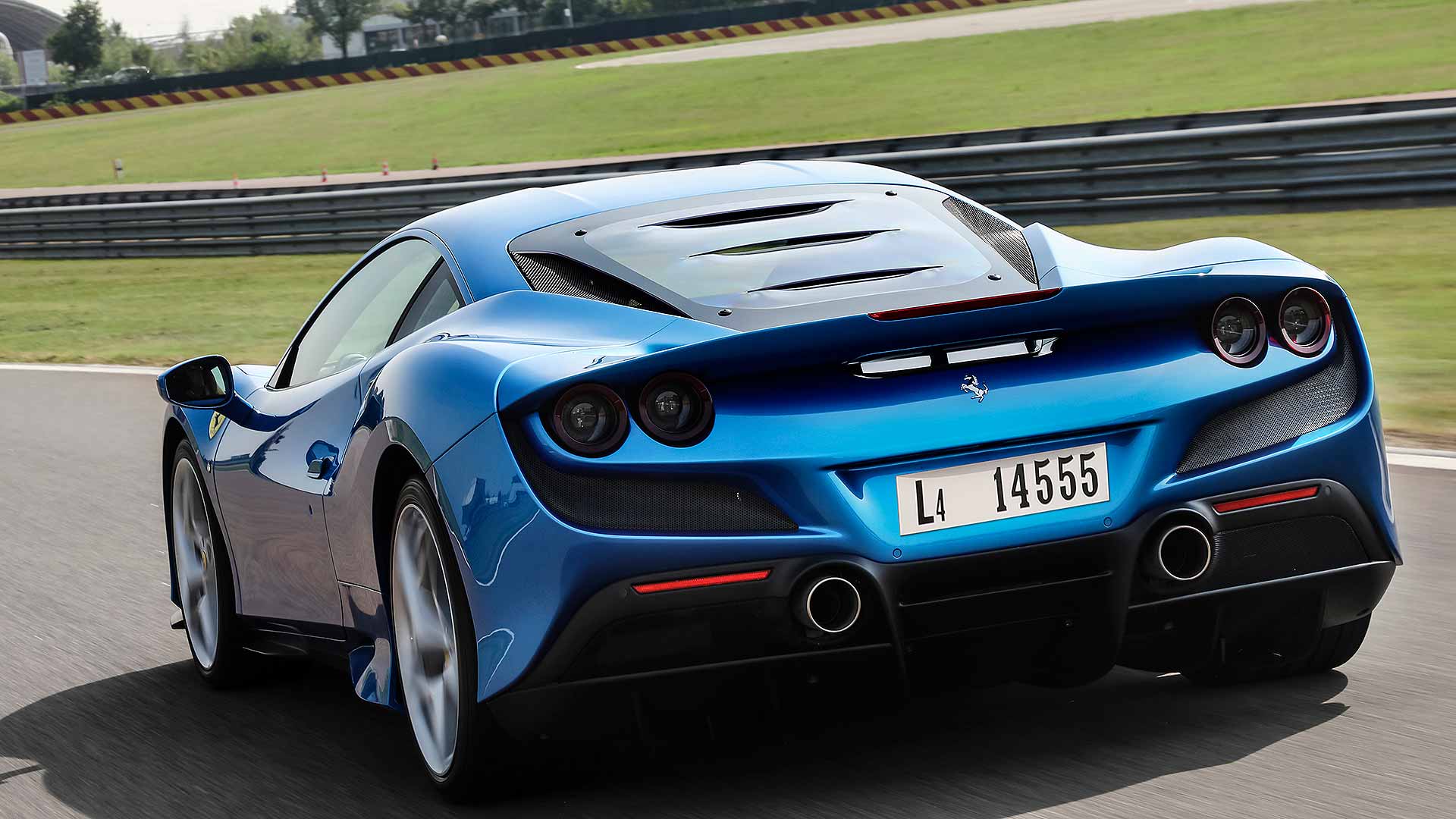 Also note the extreme visuals of that F40-inspired engine cover, and also the quad round tail lamps, which are there in reference to a Ferrari great of the 1990s, the F355. 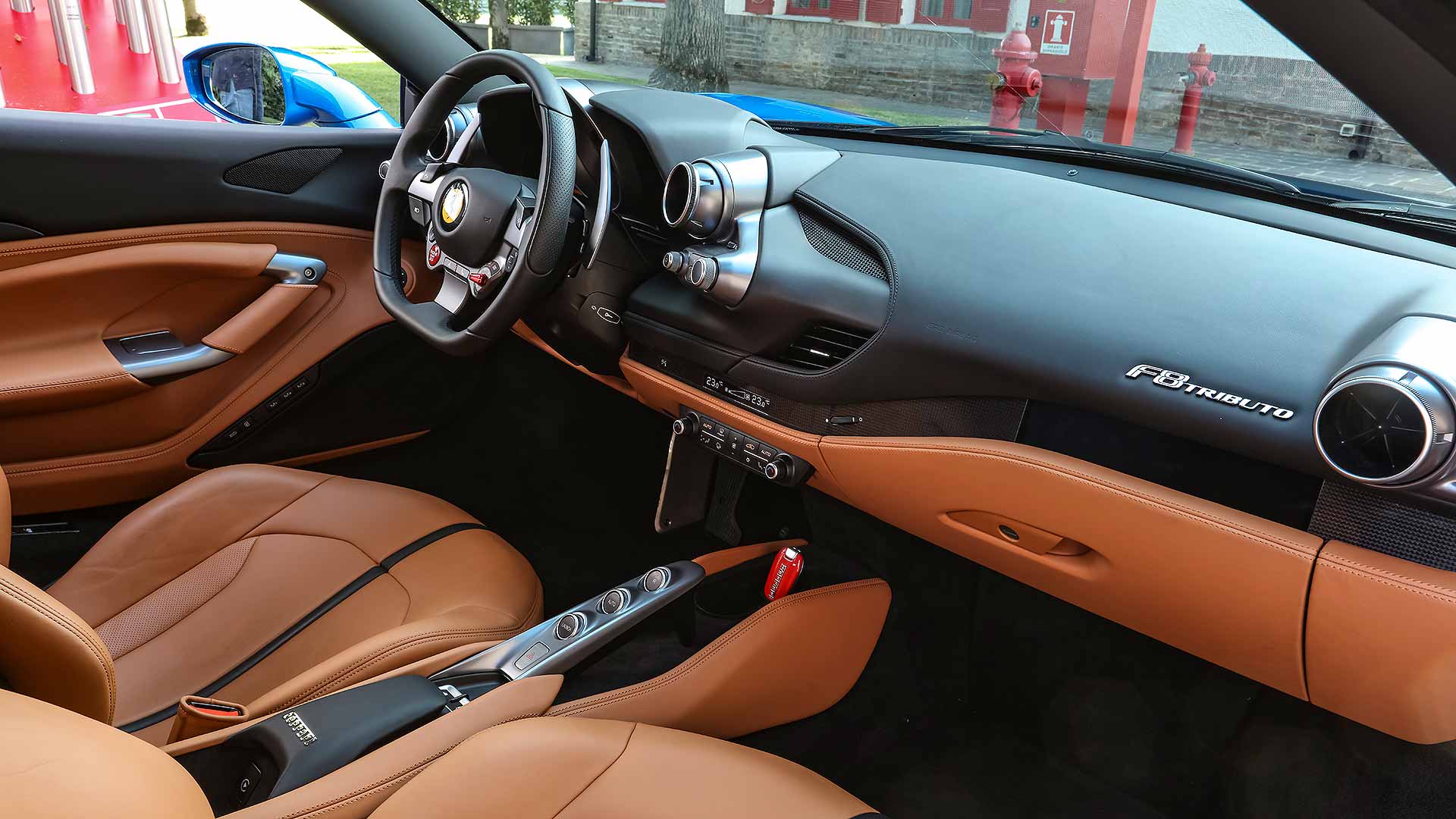 Inside, there’s been lots of work on housekeeping aspects: freeing up more stowage space for smartphones, making it appear more luxurious, building in more aluminium and optional carbon fibre elements.

There is a new steering wheel, with revised controls. Sounds a simple update – but, as a Ferrari engineer explained, the steering wheel is actually the key connection between driver and car: designing it is actually part of the suspension development process itself, to ensure the messages and feedback to the driver are perfected. I had no idea: that’s the higher level on which Ferrari works. 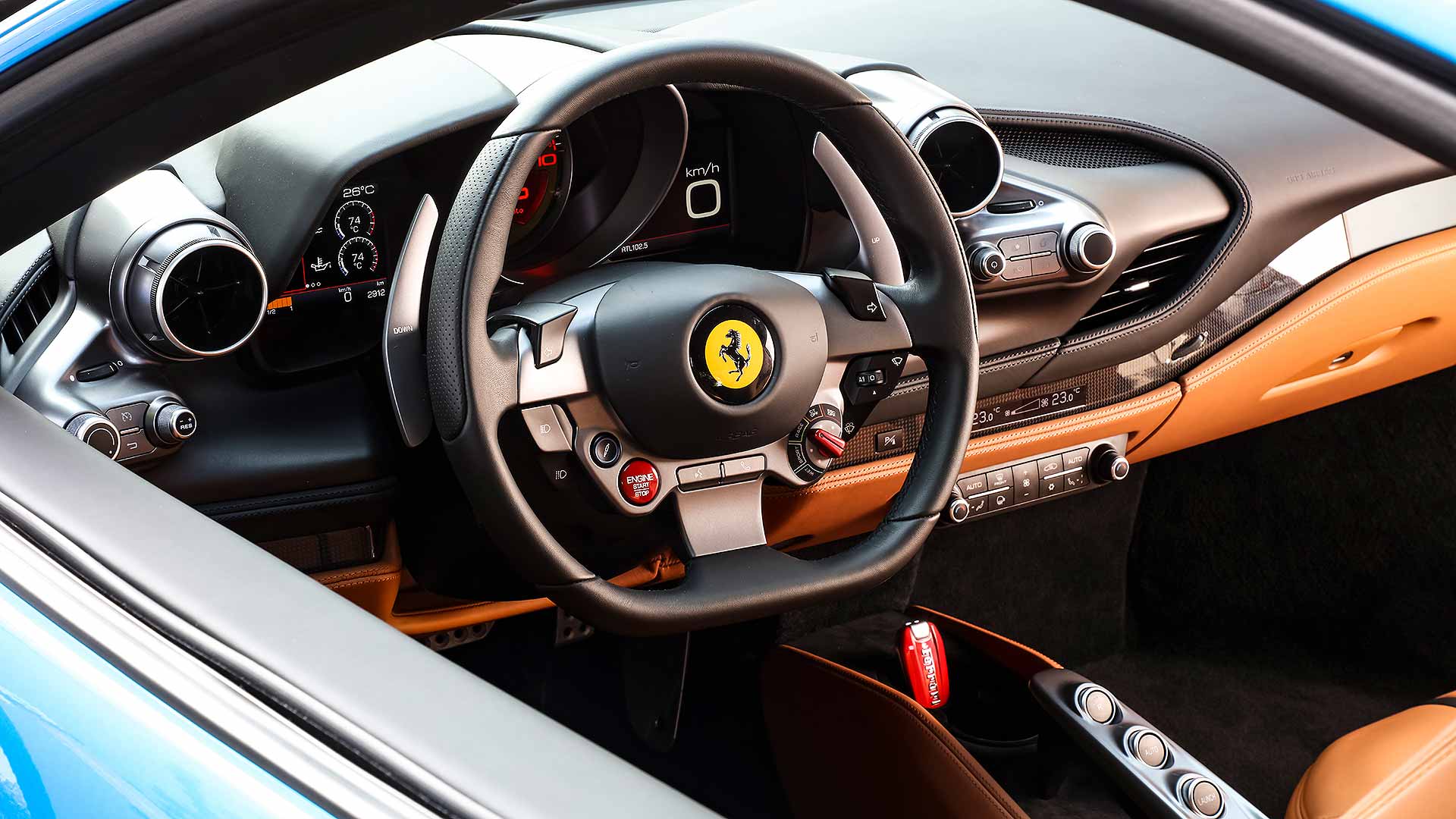 F8 Tributo passengers have a little gadget as well: an optional 7-inch touchscreen that displays the rev counter, Manettino settings, sat nav directions and other key pieces of information. Yes, it can show them how fast they’re going…

Ferrari says its V8 sports car customers are particularly passionate owners. They mainly use it on the road, at weekends or during free time, but will occasionally venture onto the racetrack. For more than half the time they’re in the car, they drive with a passenger, and while 40 percent of them are new to the Ferrari brand, another 40 percent are serial Ferrari V8 buyers, who will only buy this type of car. 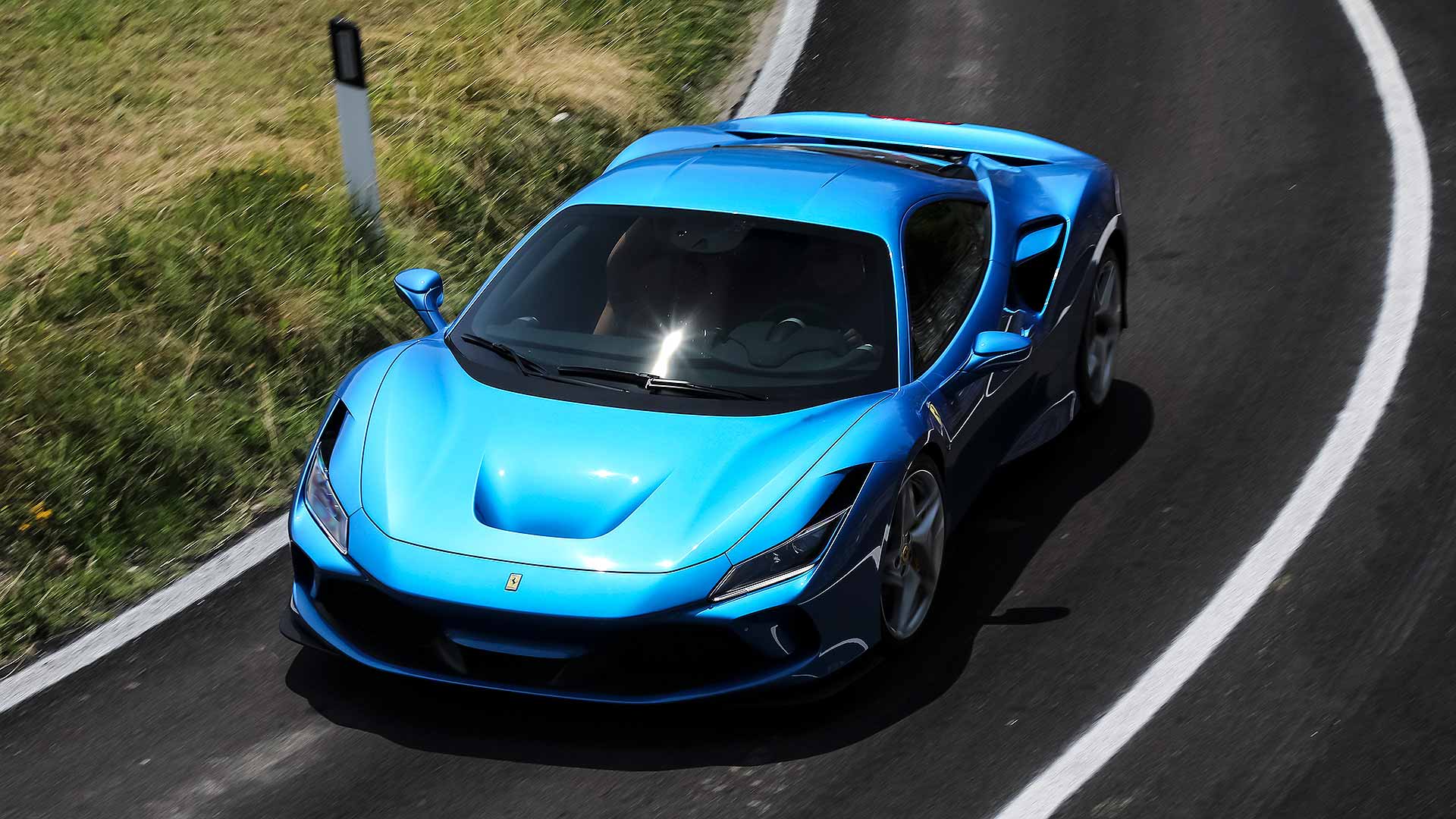 The Ferrari V8 sport Berlinetta line began with the 1975 308 GTB, we were told. This F8 Tributo is the latest and greatest in the line. But the last in the line? We shall se. If it is, though, the name will be justified. This is the finest imaginable tribute to a remarkable run of mid-engined Ferrari V8 sports cars.