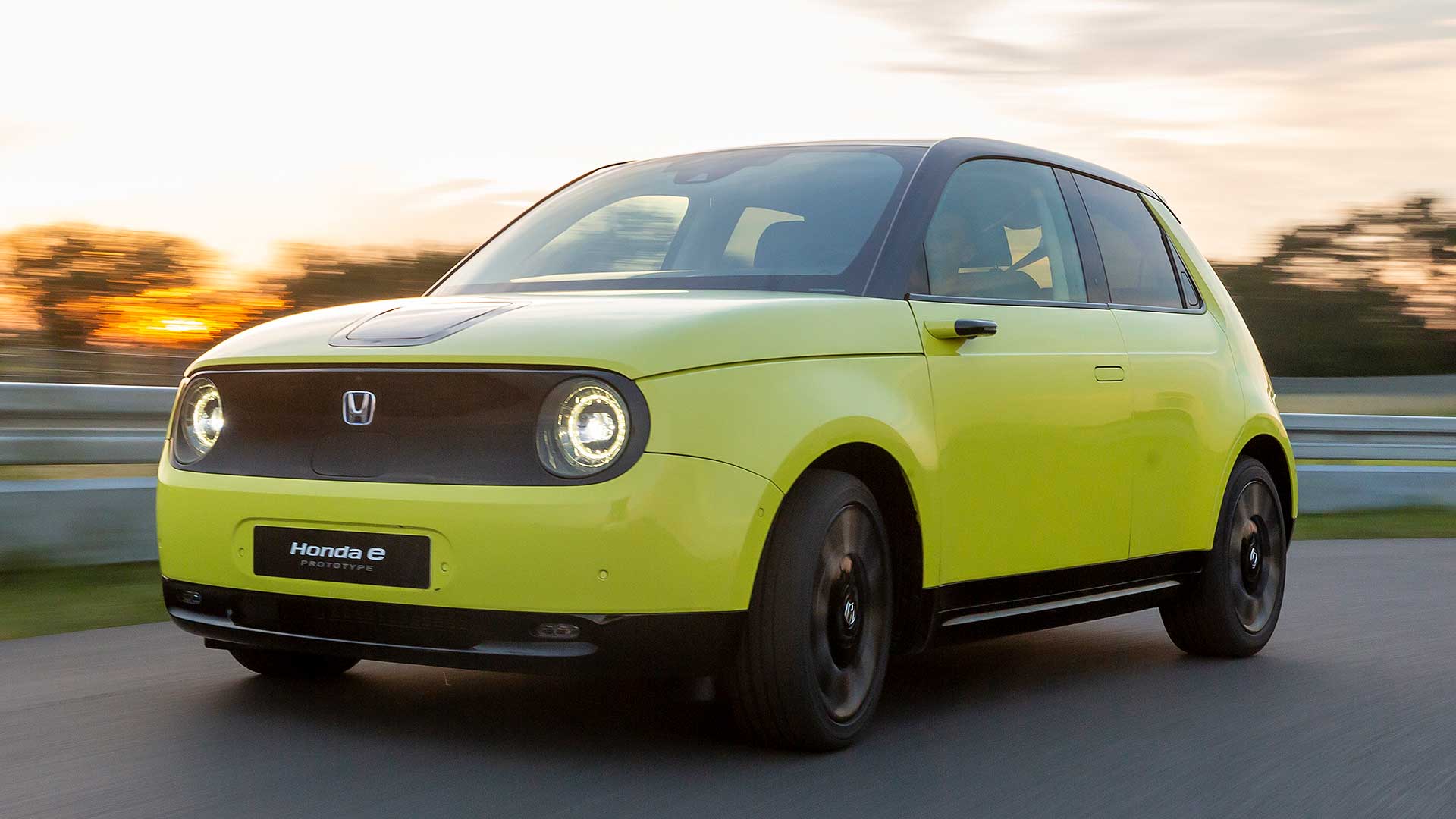 Anticipation for the Honda e urban electric car is not quite up to Tesla levels of hyperdrive, but it’s close. Amongst enthusiasts and EV fans, excitement for Honda’s leftfield take on an EV for the 2020s has been building – helped by its refreshingly purist design.

Honda wants the e, its first all-electric production car, to be an ‘iPhone for cars’ moment. But, just as people don’t just buy an iPhone for how it looks, so the Honda e needs to deliver a suitably Apple-like driving experience as well.

To Germany, then, for a secret first drive of the Honda e Prototype. That’s ‘prototype’ in the loosest possible sense. Save for a few upgrades in dashboard plastic quality and fully-functioning infotainment, this is the Honda e coming to showrooms in early 2020.

Even from this 20-minute early drive, it’s clear those placing reservations have a lot to look forward to. 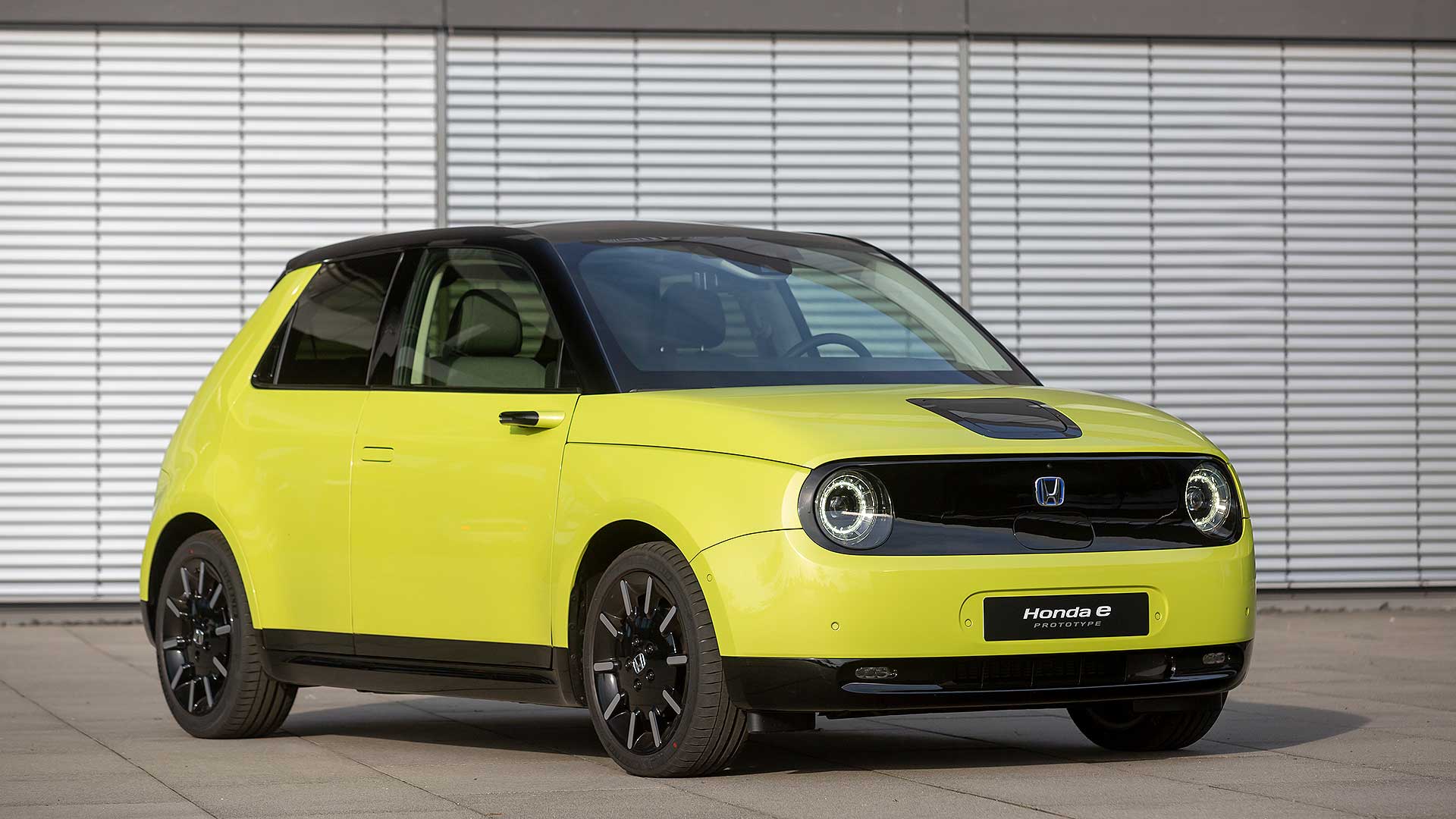 Honda had shipped over two vehicles from Germany for the drives at its training centre just outside Frankfurt. A third, static, car was on show inside for us to peer over, poke and prod. Two were white; pleasingly, the third was Charge Yellow – the first time we’ve seen a Honda e in the metal not finished in white.

It’s also the first time we’ve seen a Honda e outdoors. Natural light makes it look even more ‘concept car for the road’. Hidden door handles, hidden windscreen wipers, cameras instead of door mirrors, nothing exposed that couldn’t be concealed – this really is a car for the 2020s. And, in yellow, it looks magic.

Intentionally simple lines create a ‘quiet’ design, and a neatly proportioned one. The boss of the project, Kohei Hitomi, says it was inspired by the original 1970s Honda Civic (the Honda Urban EV concept, he later admitted, even more so). But it’s not retro. 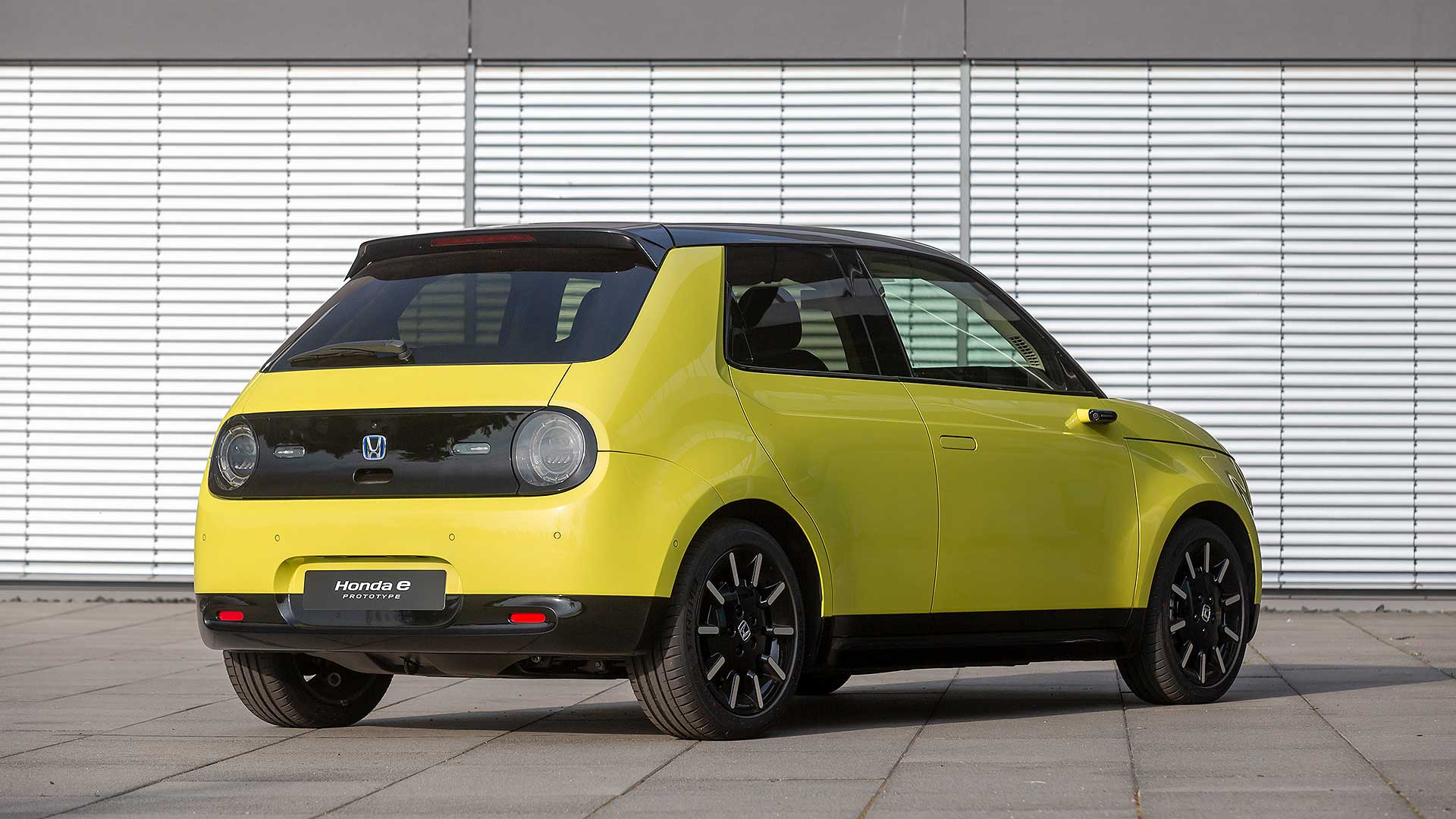 The clean nose and cute round LED headlights give it a lovable look, an effect replicated at the rear. The floating roof strengthens the rear C-pillar design. Packing such impact into a car shorter than the Honda Jazz gives it concentrated purity and suggests no corners have been cut. This is a premium product, alright. 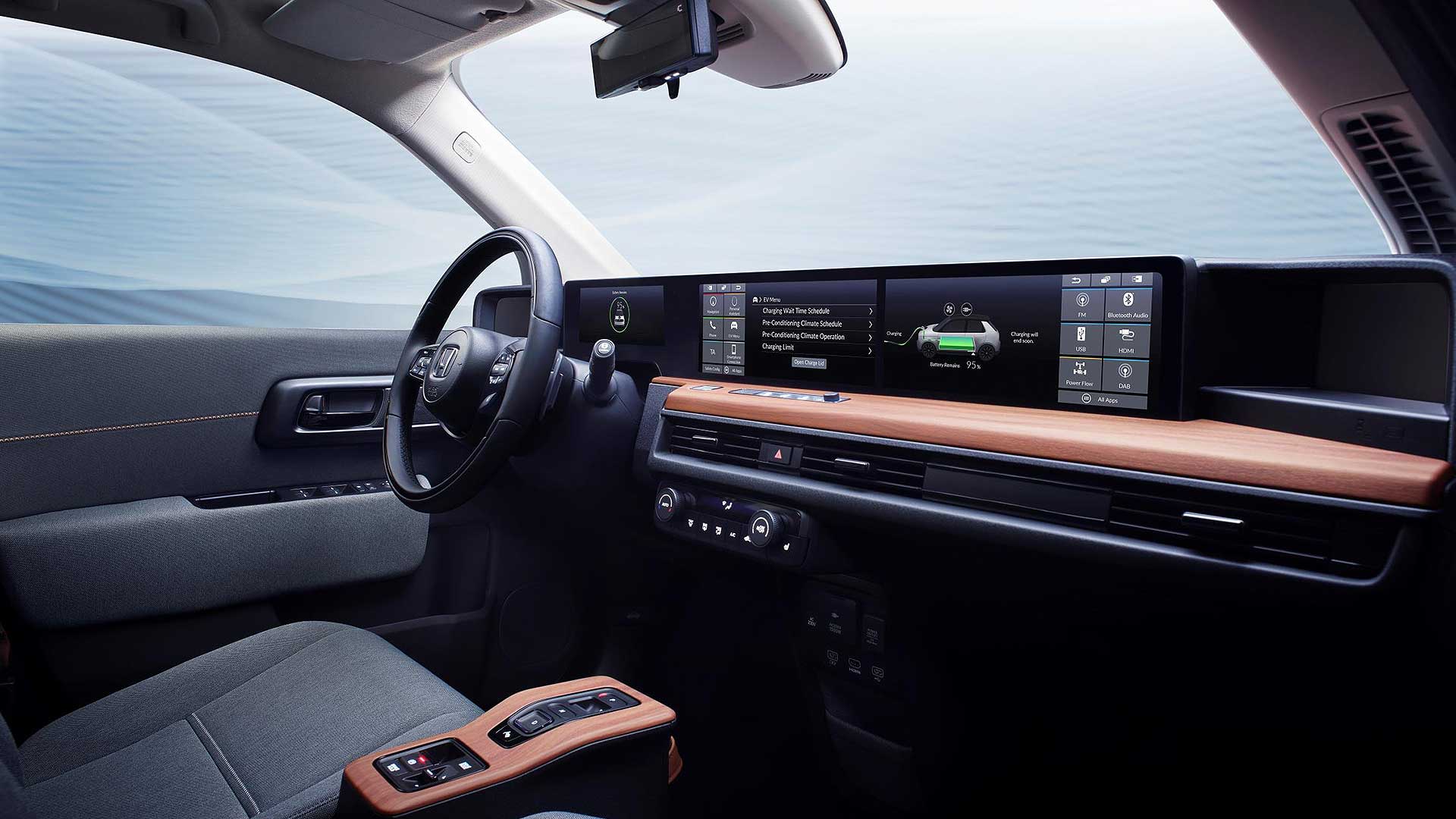 I tug the retractable door handle and step in. The opening is extremely long for such a small car, making it open-plan and easy to walk inside (it’s tighter for you, rear-seat passengers – sorry). Bathed in natural sunlight, the lounge-like cabin is very welcoming.

Nicely-padded seats are supportive, and set fairly high for a good view out. The lack of door mirrors is a surprising highlight – combined with relatively flat side glass, it gives a panoramic-like view from side to side. This is motoring in widescreen. 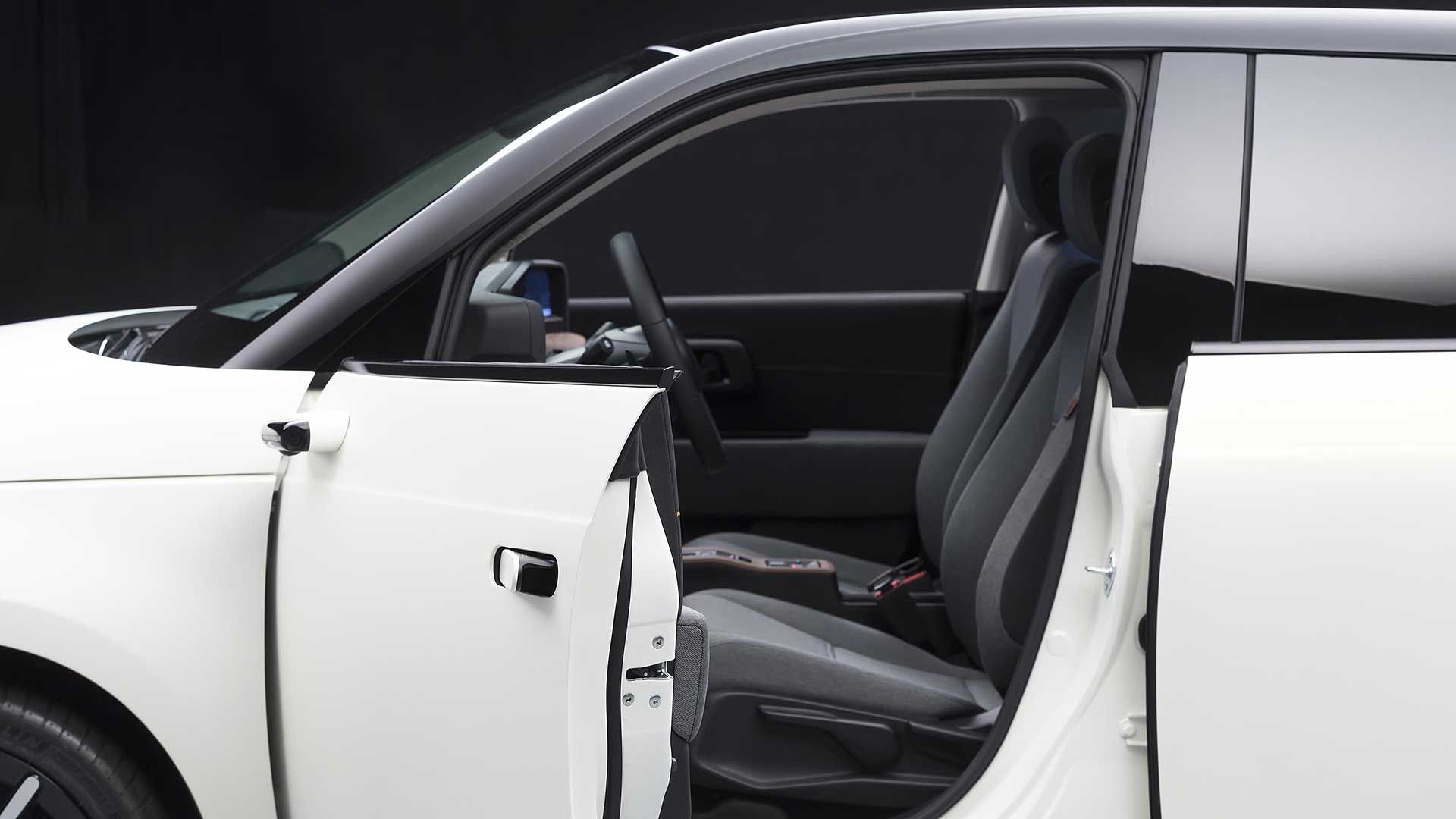 The shelf-like dashboard enhances this, with its own widescreen effect thanks to the stack of screens from left to right. The outer two are for the rear-view cameras; the middle ones are driver displays and infotainment. They’re not fully functioning in this prototype but I saw enough to suggest Honda’s weaknesses in this area may be fixed. 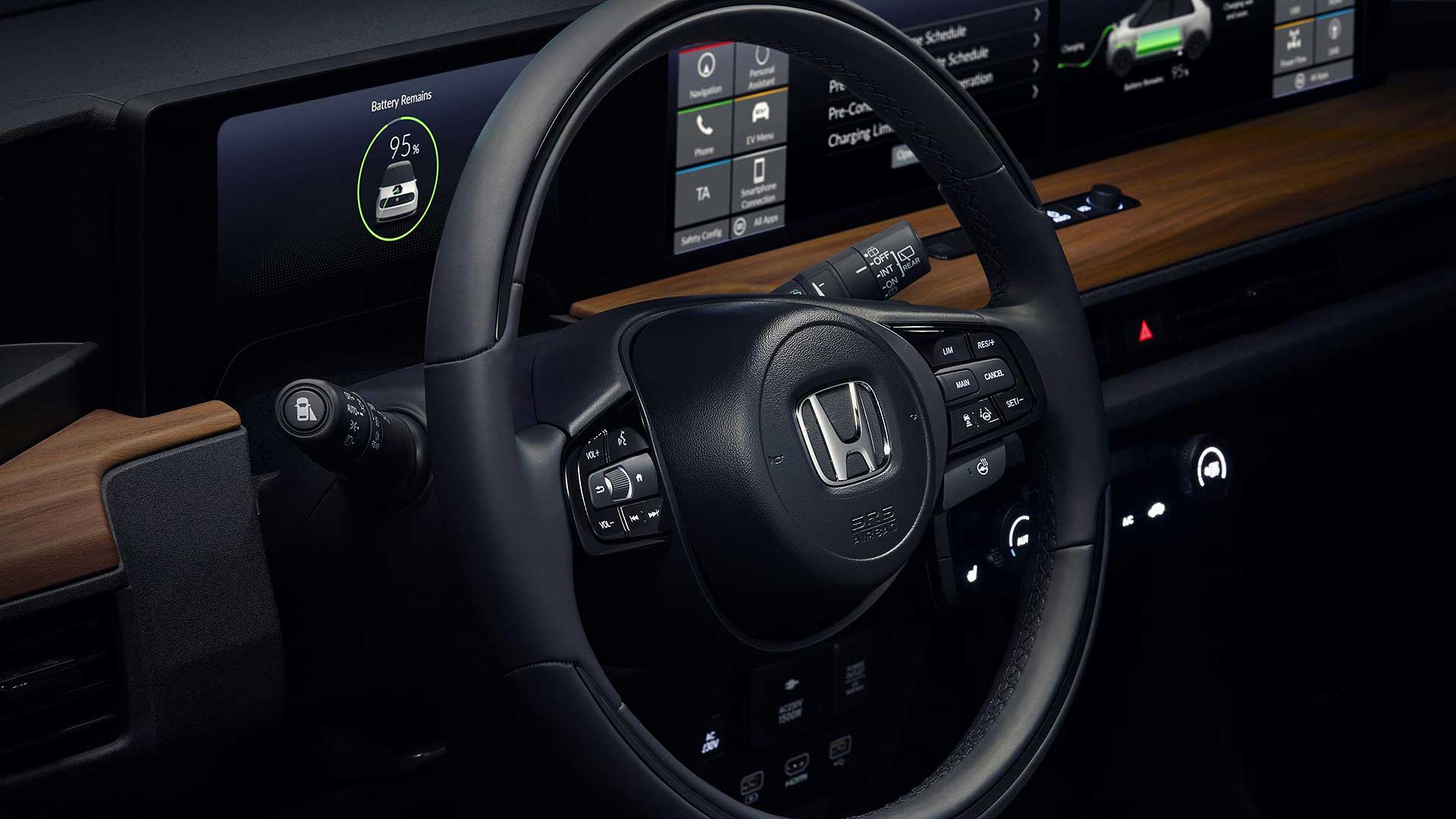 Plush, modern fabrics, some surprisingly pleasant wood-effect trim and a wonderful large two-spoke steering wheel modelled on the original 1970s Civic are further tactile treats. There’s plenty more to investigate, but it’s to do what I was in Germany for – drive it. 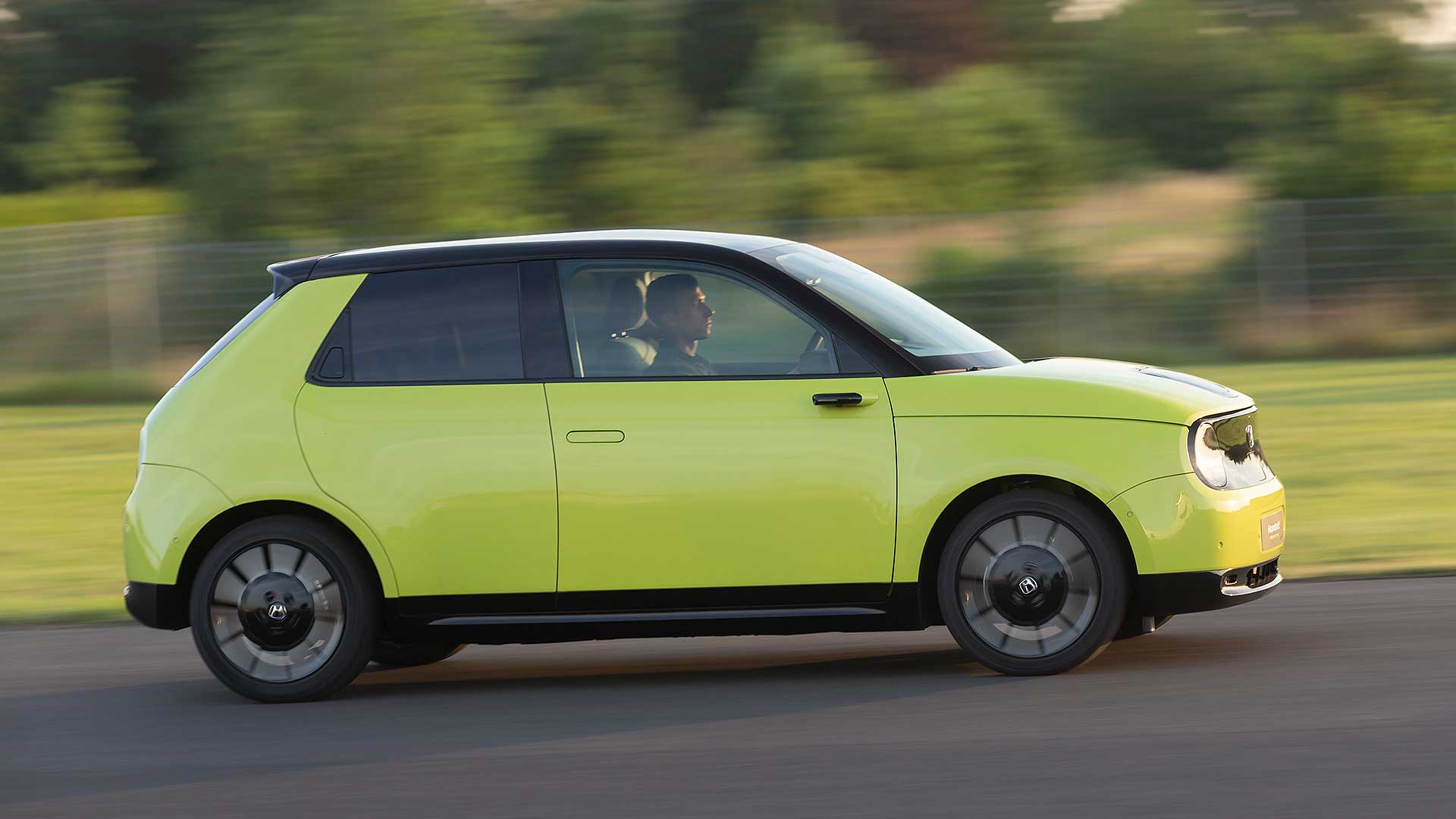 Honda’s first electric car, like all EVs, makes no noise when you turn it on. First-timers still find this spooky. What experienced EV drivers will like about the Honda e is how much silence is retained even when you get underway.

I press ‘D’ on the auto shifter, squeeze the accelerator, and glide away with just a faint whirr in the background. Speeds quickly rise, but noise levels don’t. Wind noise doesn’t rustle, the tyres don’t roar, the suspension doesn’t bump and thump. Certainly at urban EV speeds, the Honda e Prototype serves up premium car refinement.

Acceleration is satisfying, rather than Tesla-like obscene (0-62mph will take around 8.0 seconds). That’s fine; this is a punchy 150 horsepower city car rather than a performance machine. The Honda e is rear-wheel drive, too, so has brilliant traction off the line. It also means the steering wheel doesn’t squirm and fight when you boot it in bends. 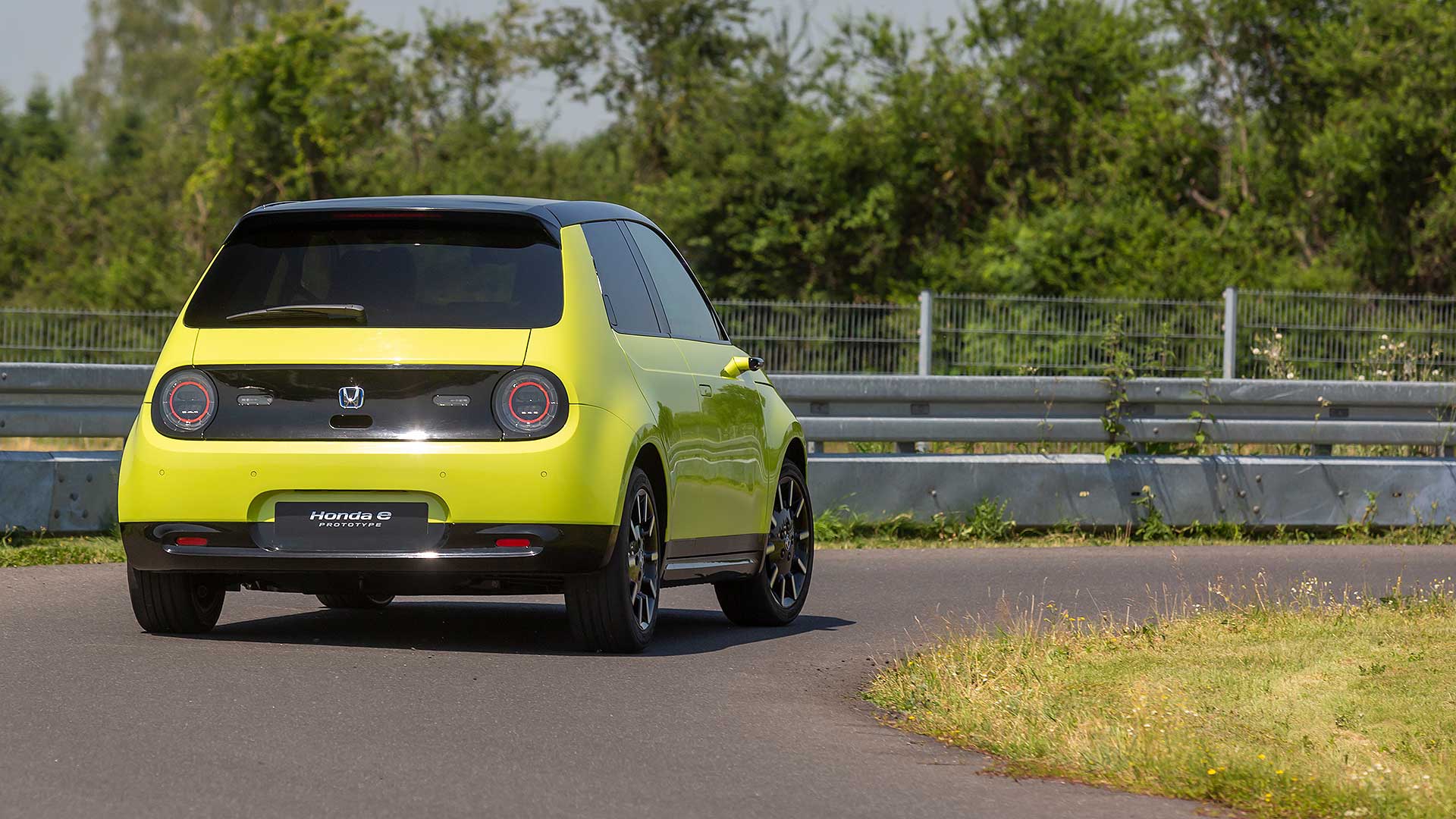 The heavy batteries are positioned low in the car, so the centre of gravity is also low. This makes it stable and sure-footed in corners. It’s not over-stiff, like a hot hatch, but it’s still agile enough through a slalom Honda has set up on its little test-drive course. And at the bottom, yet another surprise awaits. 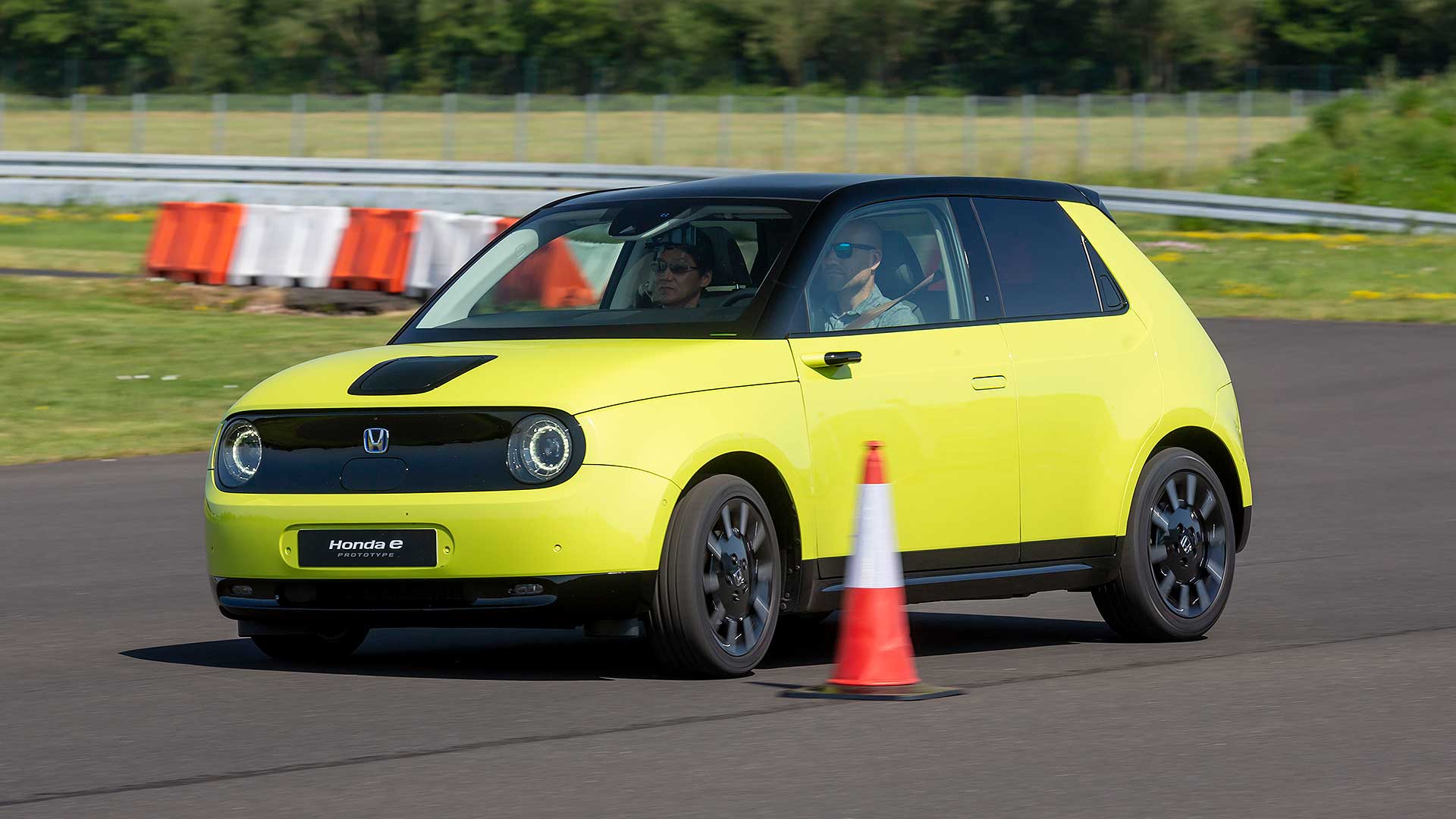 I drive through a cone gate. Painted on the tarmac is a white line, just a bit longer than the Honda e Prototype itself. The Japanese engineer alongside me instructs me to circle it, so I move off and wind on some steering lock. And some more…

… and some more. And gasp. Because we are driving round in a circle within that white line. The only time I’ve experienced this before is in a black cab – but the little Honda is way shorter than a London taxi, emphasising the effect further. 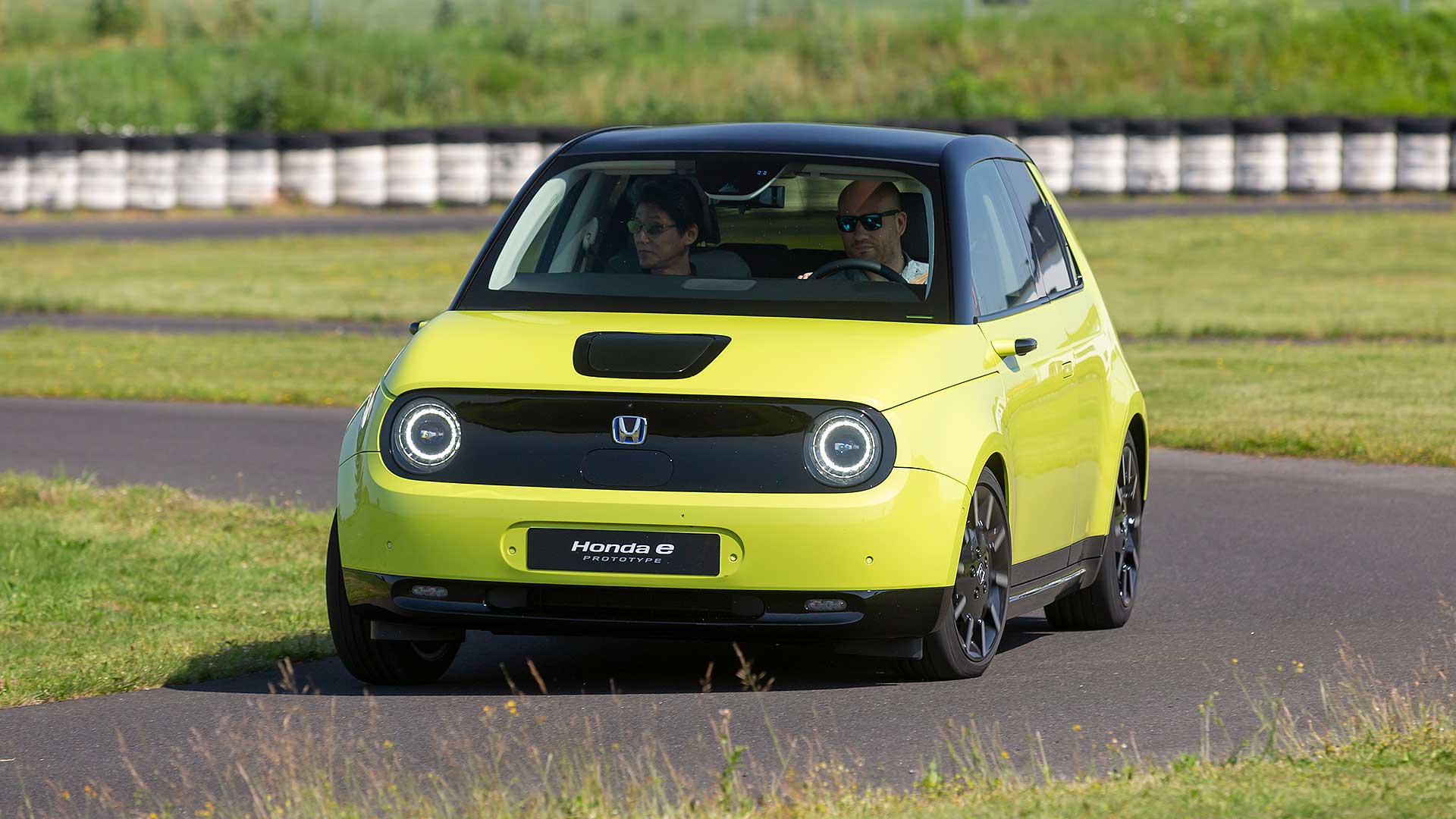 It’s so mesmerising, I keep on circling. It feels like I’m turning around in a space shorter than the car itself; with a turning circle of just 4.3 metres, it’s not far off. I get dizzy; the scenery comes into view sideways at an incredible rate. Again, the panoramic view out further accentuates it.

In an instant, Honda’s ambition to be readying the best urban EV in the world is reinforced. But there’s more. 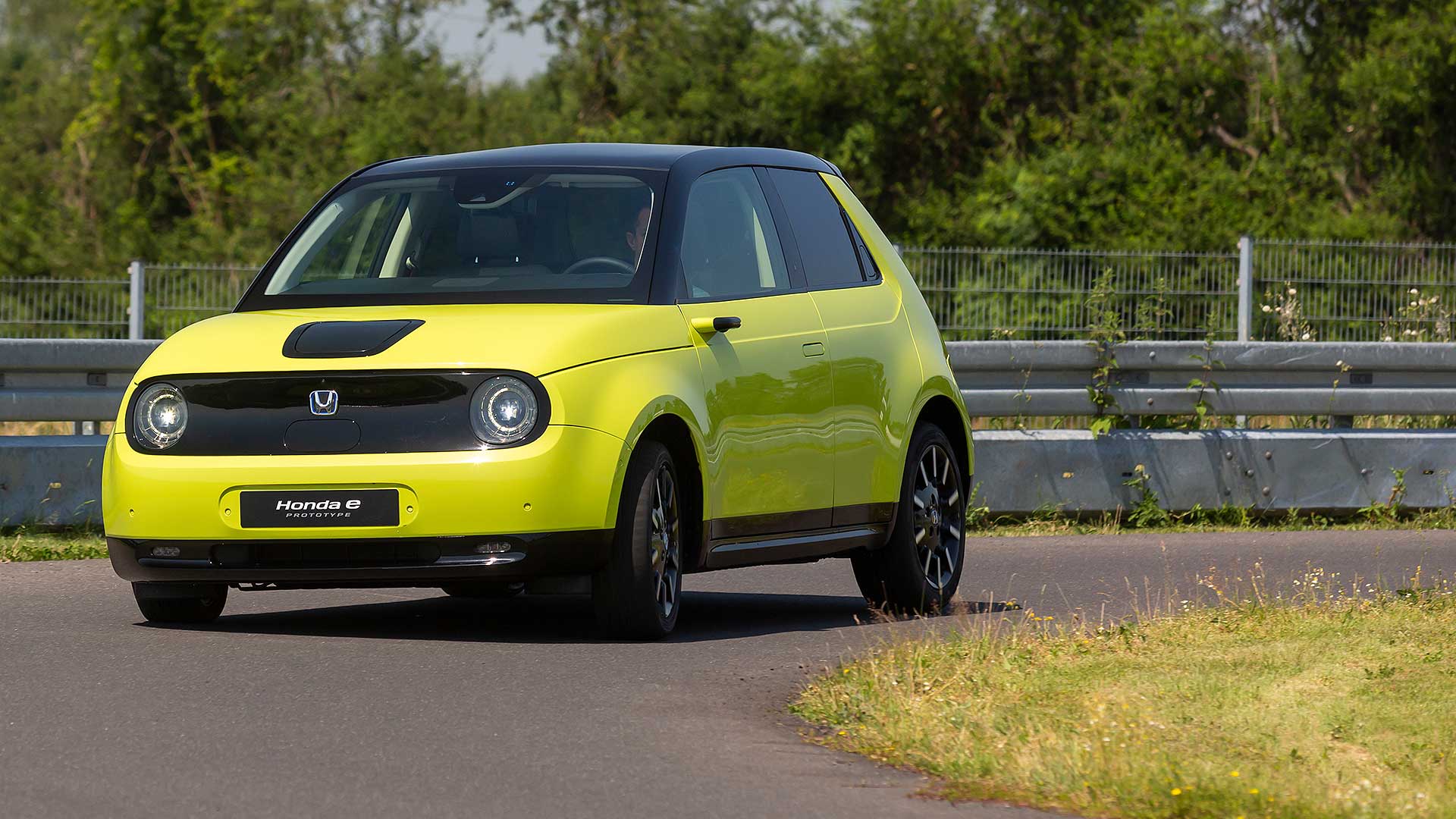 The test track tarmac is smooth, so I have to go a little off piste to find some bumps. It seems to soak them up smoothly, and the ride comfort generally seems nicely cushioned. The Honda e Prototype glides, rather than jiggles, with a premium-like plushness.

It means that, in 95 percent of instances, you won’t need to use the brake pedal. Mastering it will further enhance the linear feel you get driving the Honda e. It seems a sophisticated machine that Honda’s brightest engineers have poured their heart and soul into. 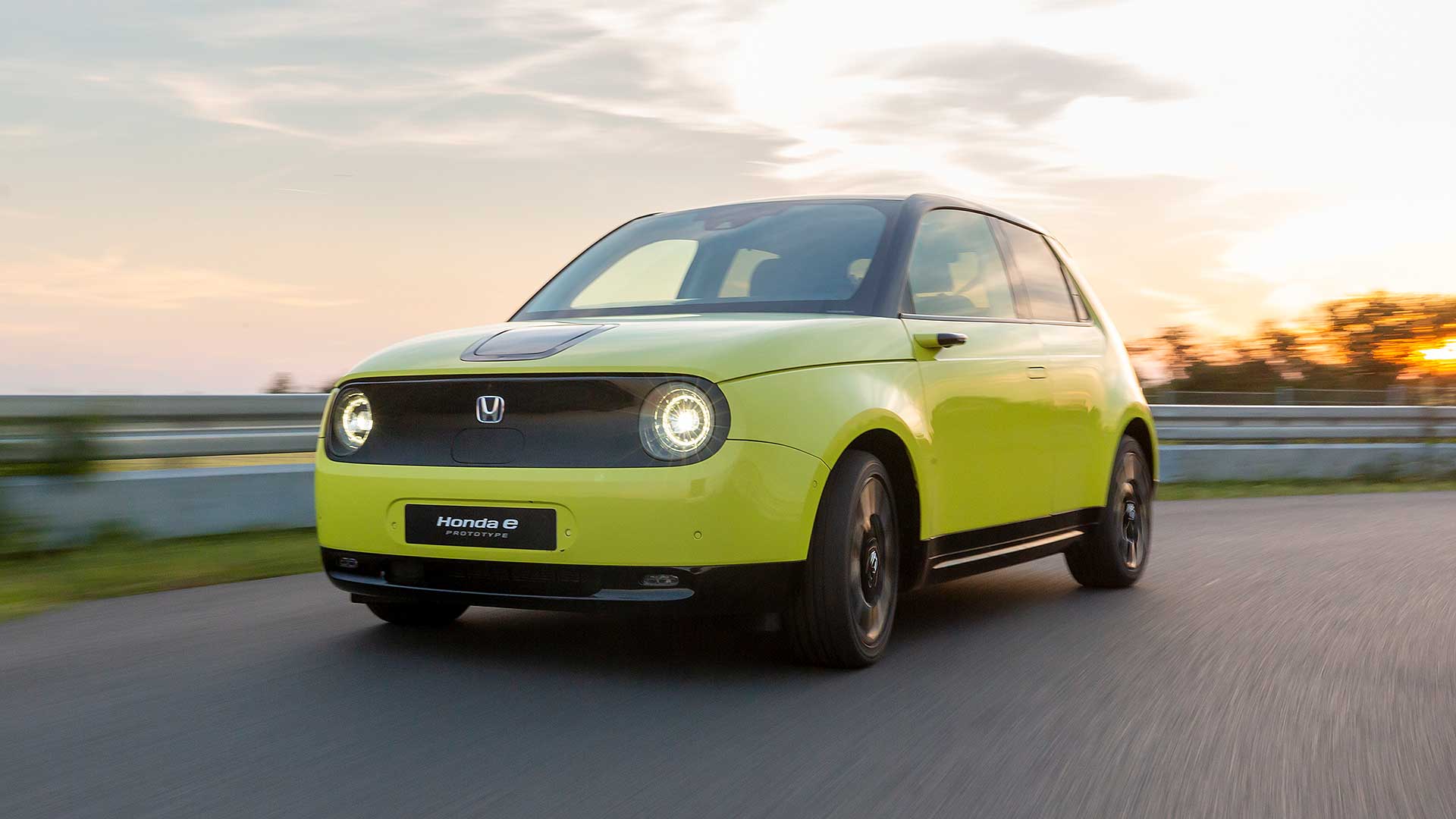 Of course, there are still plenty of unknowns. This is a prototype, so we can’t judge whether final quality really will warrant comparisons with Apple. We don’t know the range yet; Honda’s merely said it will be more than 125 miles, which could be a challenge in an era where mainstream Kias and Hyundais are edging closer to 300 miles.

What we do know is that rear-seat space is compact car-like, and getting in and out is awkward due to the small door openings. The boot is tiny, with a high floor due to the motor mounted beneath. Honda has even designed a central one-tug handle to quickly fold the rear seat flat and create more space. This likely is how many will frequently be configured.

Then there’s the price. This is a city car that will command a premium car price: upwards of £30,000. For a model with such a short range, that could be a challenge, even if the 35.5kWh battery can fast-charge to 80 percent in 30 minutes.

Honda insists it’s not a problem. This is the world’s best electric city car, where range isn’t an issue, but compactness, comfort and cutting-edge design are. It is a luxury good, an Apple-like electric car early adopters will be willing to pay a premium for. The bigger, longer-range stuff can come later.

We shall see. What we do know is that an early taster of the Honda e Prototype suggests it will be as appealing to drive as it is to look at and sit in. It looks characterful, and its on-road performance is distinctive too, particularly the comfort, the quietness, and the turning circle.

On this evidence, anticipation for the Honda e deserves to ratchet up a further notch towards Tesla levels of desire. Place your reservations now, if you haven’t already…