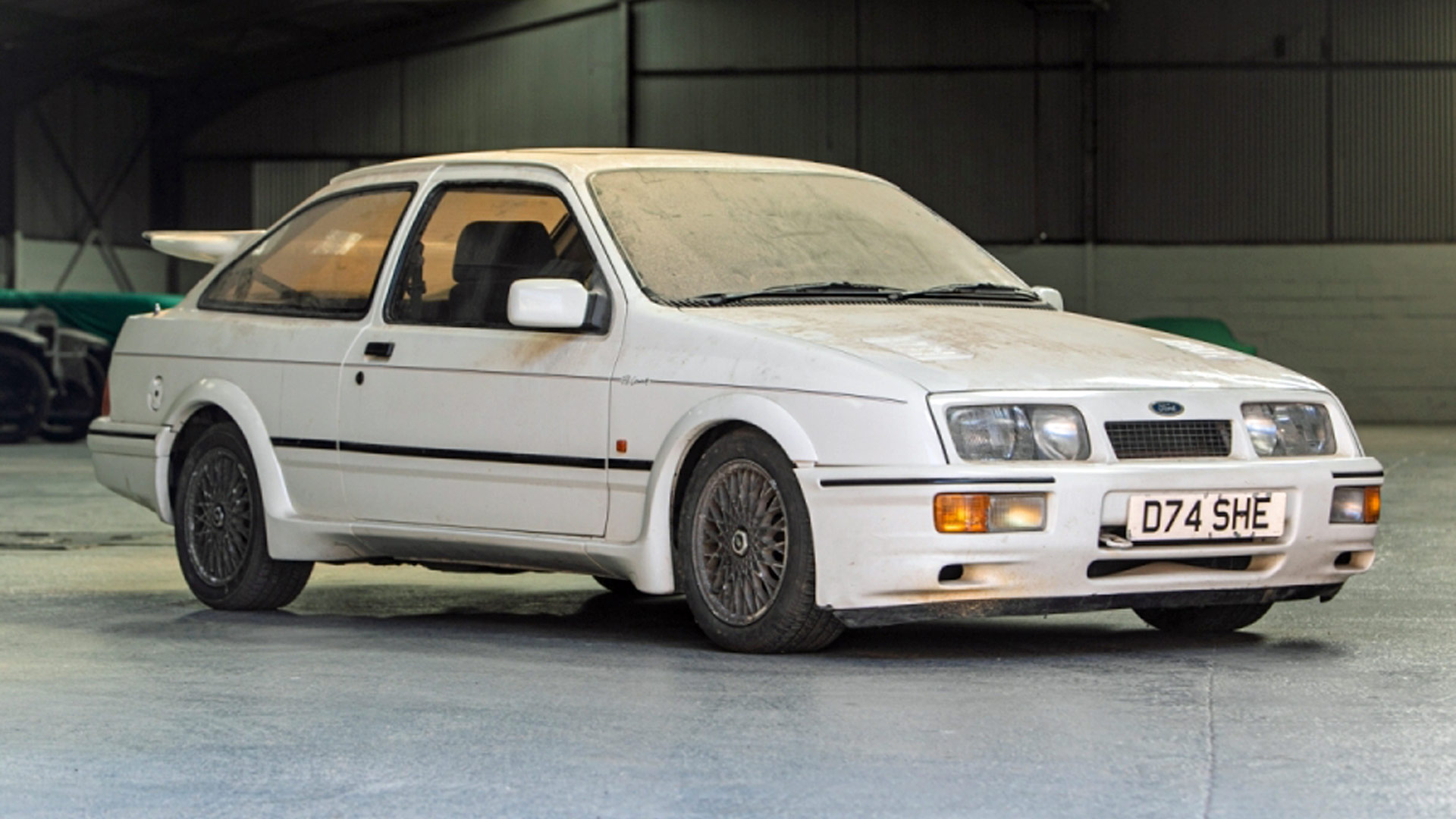 Fast Fords from the 1980s have become hot property at auctions in recent years, with records broken for the biggest sales.

One of the lots listed for the forthcoming Silverstone Auctions May Live sale is another desirable modern classic.

However, the winning bidder might need to be prepared to get their hands dirty to make the most of this hidden treasure… 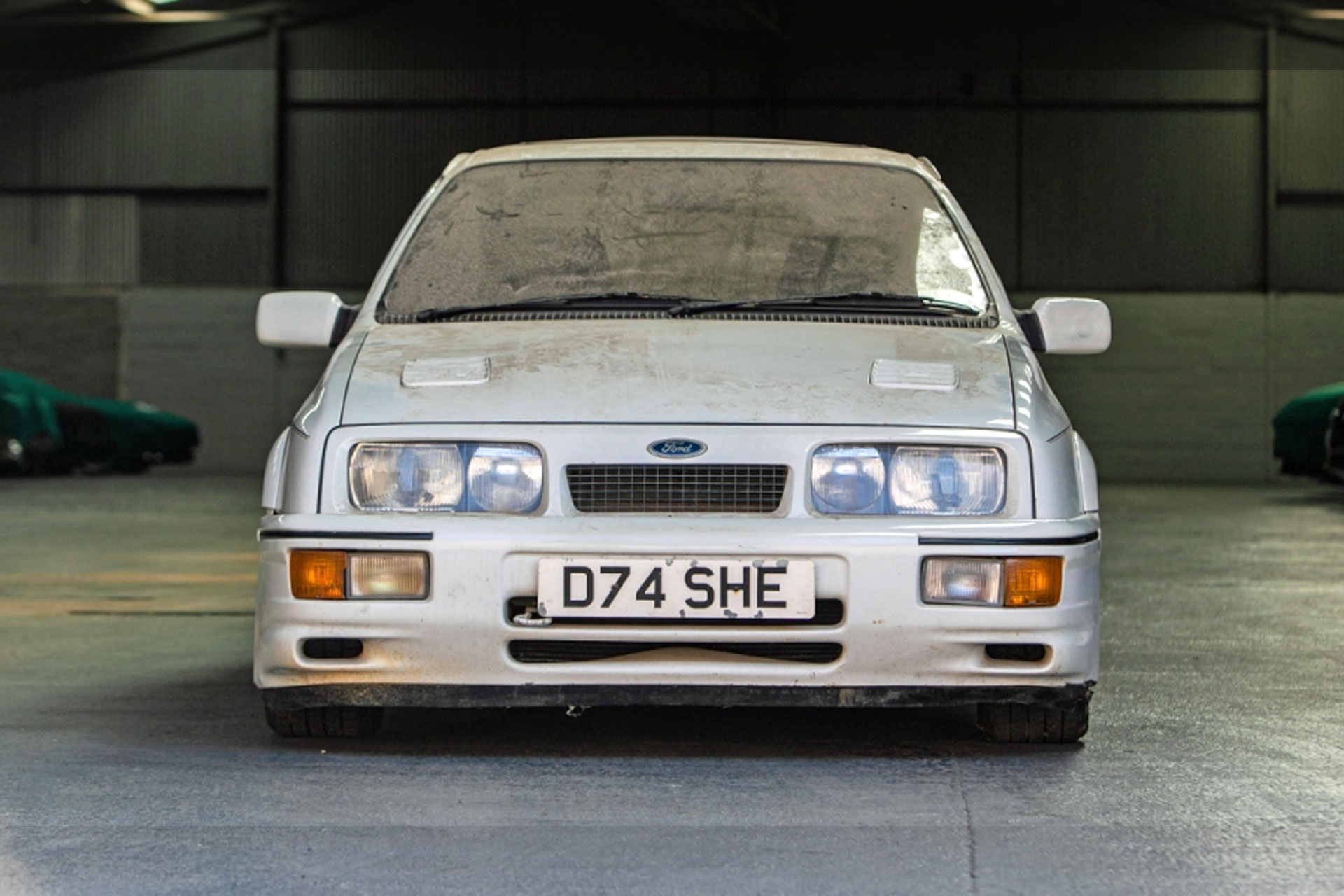 The ‘barn find’ phenomenon has taken over the auction world, with collectors fighting for abandoned classics. The 1987 Sierra RS Cosworth in question here is slightly different, having been deliberately stored in a garage by its owner.

Sold new in June 1987, the car passed through several owners before reaching the current registered keeper in June 1991.

The Sierra was then driven round 16,000 miles, taking the total recorded on the odometer to 84,552. In 1998, the car was then placed into a state of hibernation until March this year.

Break out the chamois leather 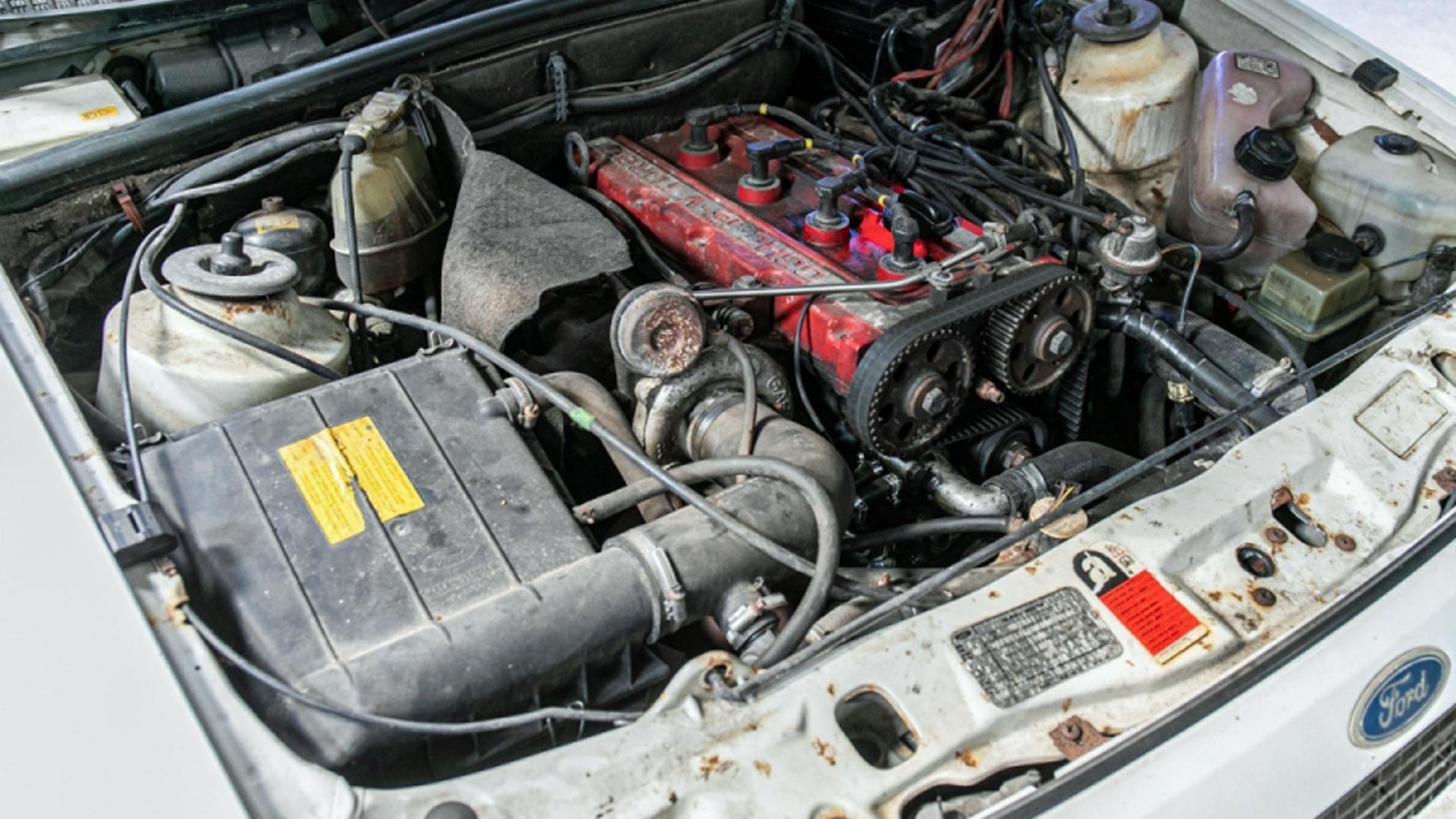 Untouched for more than two decades, this Cosworth has all the dirt and dust you’d expect from a lengthy period living in a garage.

The seller has decided to put it up for auction in unrestored original condition.

Externally, there is enough grime to keep a professional valeter busy for days. The 15-inch multispoke wheels need a deep clean, while the interior is grubby but looks complete.

Under the bonnet, the 204hp turbocharged 2.0-litre engine is far from being in concours condition, but could be smartened up again. 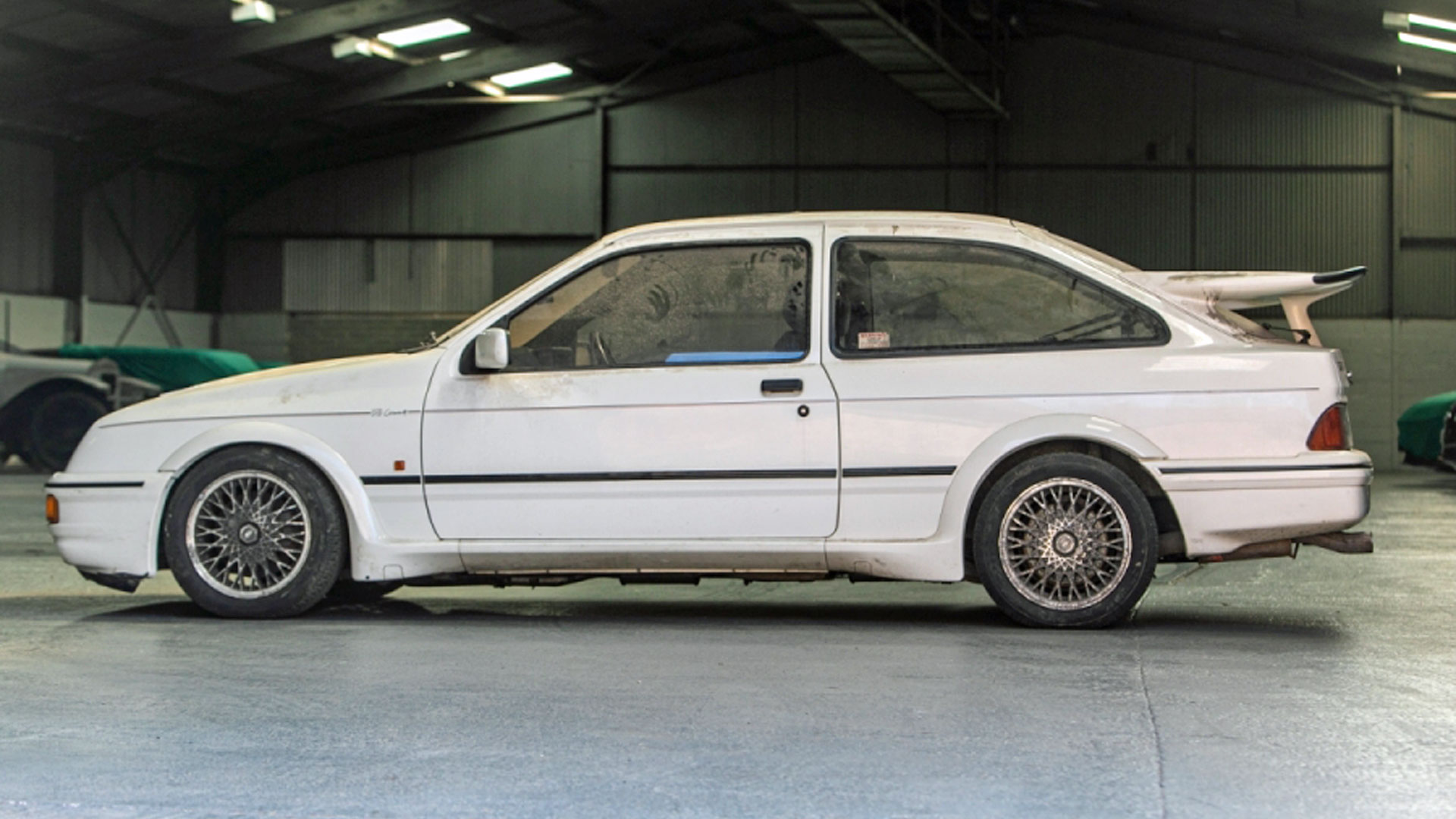 Despite the covering of dust, the seller notes the car does run. More than £1,300 has been spent fitting a new fuel tank and fuel pump, along with a comprehensive service, to get it working again.

Other work included freeing seized brake calipers after decades of standing still. A new water pump and cambelt were also installed for the Cosworth YBD engine.

When new, the rear-wheel-drive Sierra RS Cosworth would have been capable of 0-60 mph in 6.5 seconds, with a top speed of nearly 150 mph. The racing Sierras the road car existed to homologate were considerably faster, and dominated Touring Car competitions around the world.

A whale of a time 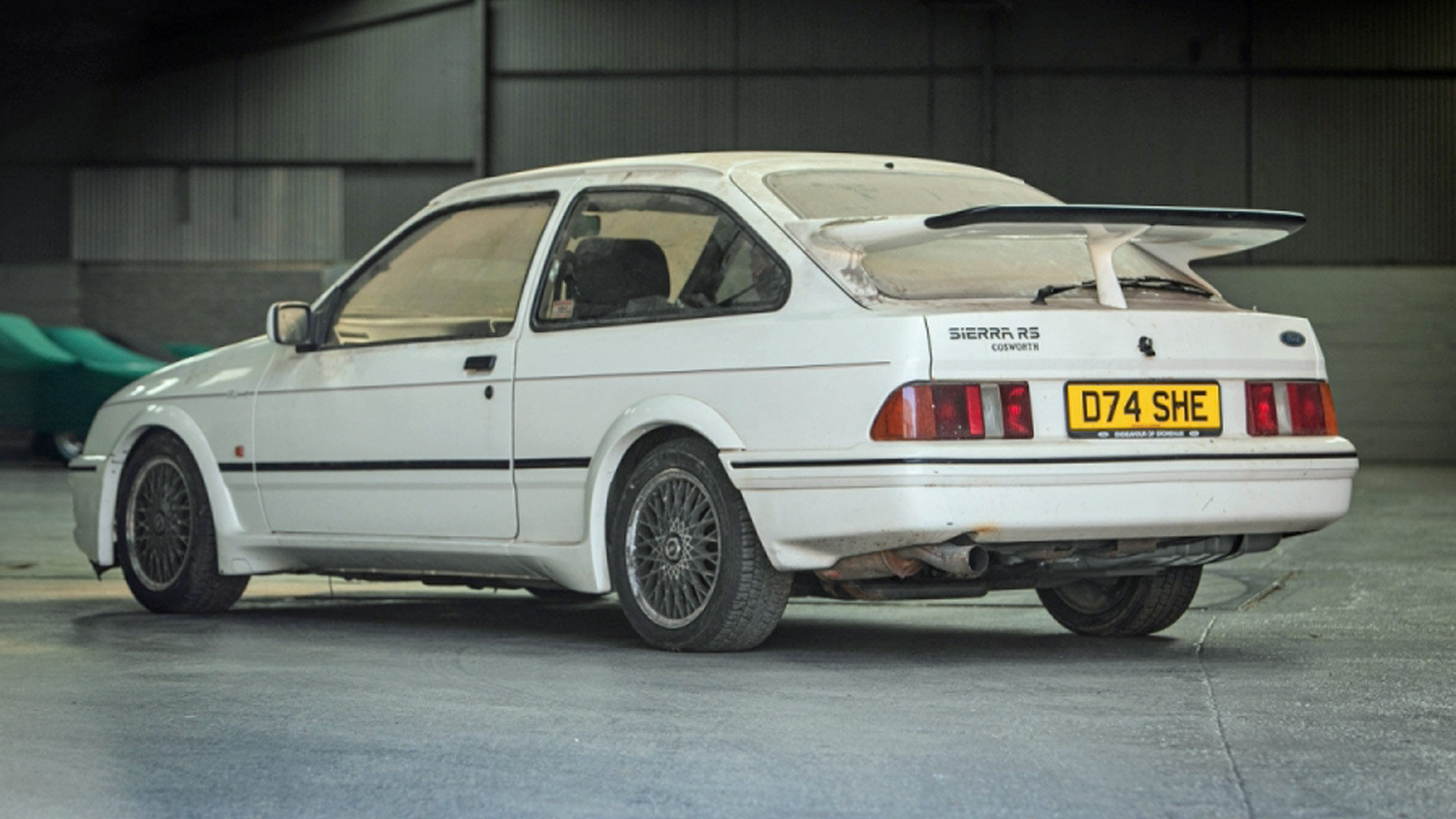 Putting a value on this Sierra RS Cosworth is no easy task. Being one of only 1,650 examples old in the UK makes it rare, while the decades spent in storage add a special twist.

Last year a barn-find RS Cosworth sold for more than £80,000 at auction, with that example having been taken off the road in 1991.

Bidders and enthusiasts will have to wait until 23 May to see what the Sierra sells for. Silverstone Auctions will run the sale behind closed doors, but you can bid via telephone or online.

Recreate your Vanishing Point movie dreams with this 1970 Dodge Challenger

You could own an original classic Ferrari POLICE CAR