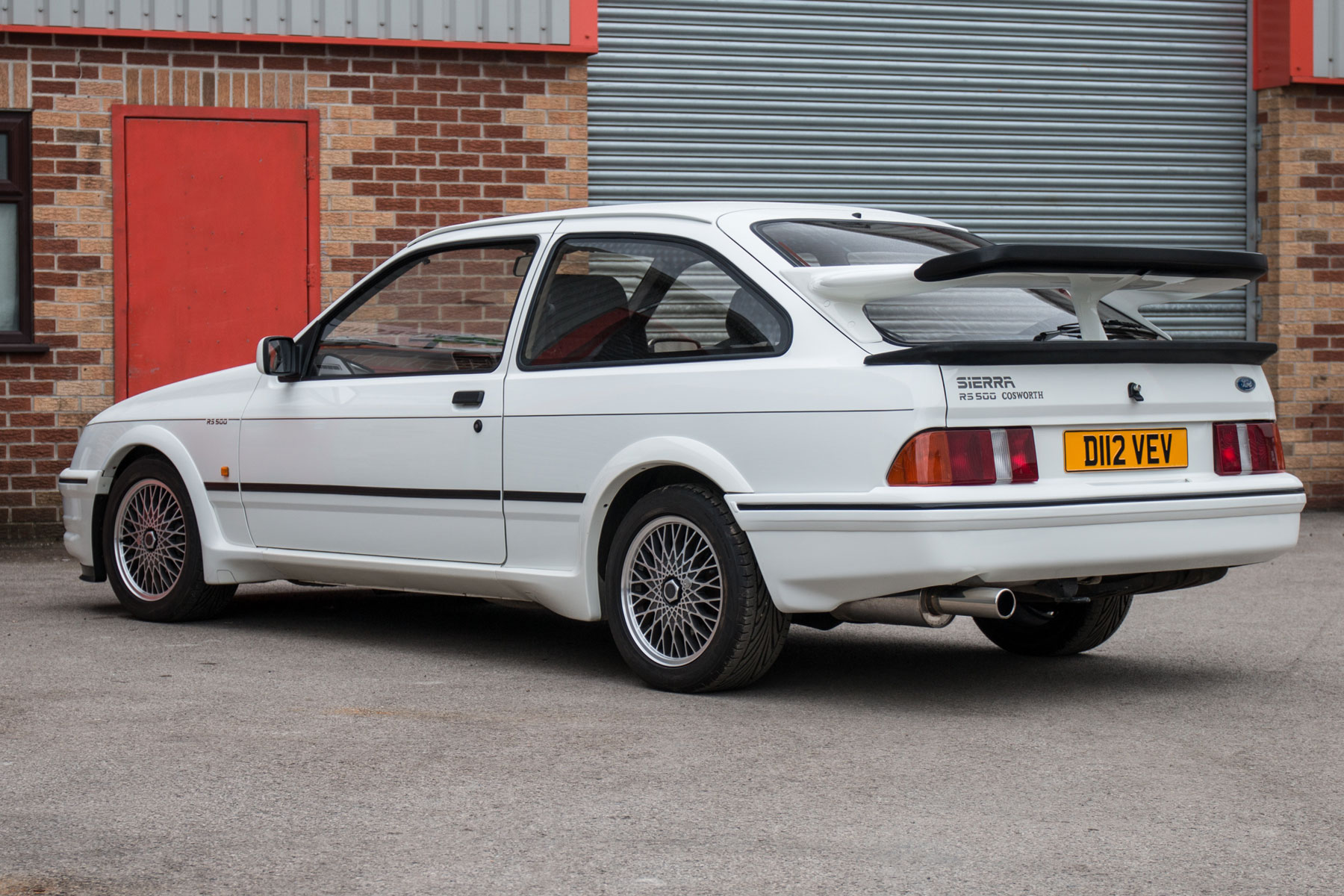 What are you doing this Saturday? Not on the guest list for that wedding in Windsor? Failed to secure tickets for Chelsea Rovers vs Manchester Athletic? Fear not, because that leaves you free to spend upwards of £100,000 on a Ford Sierra.

The market is such that we hardly bat an eyelid when somebody mentions a six-figure sum for a fast Ford, but what makes this Sierra particularly special is the fact that it’s the first Cosworth RS500 ever built, and the first of four pre-production cars. It’s also the only one built by Ford, as all the others were put together by Tickford.

Visually, the RS500 was set apart from the standard Sierra Cosworth courtesy of a revised front end and an additional tailgate spoiler, designed to generate more downforce and improve cornering. Under the bonnet, Ford added a larger turbocharger and intercooler which, when combined with modifications to the fuel injection and cooling systems, added 20hp to the regular ‘Cossie’.

Chassis number one was used as a prototype prior to sign-off, tested to the extreme by Ford’s test drivers. It was consequently reshelled by Ford before being sold to its first owner in March 1987. It changed hands a number of times – including a spell in Norway – before arriving back in the UK in February of this year.

What do 5 Cosworths, a Mexico and a GT have in common. That's right they're all Fast Fords coming to our May Sale on the 19th May at The Wing, Silverstone Circuit. For more information about the Sale and to register to bid: https://t.co/UB6RxIVMMV pic.twitter.com/MuEr8Vew1L

Nick Whale, managing director of Silverstone Auctions, said: “It’s chassis number one, the first Sierra Cosworth RS500 ever built! This car is truly a one-off, and for any serious Ford collector, this must be the car to have – the one that started it all.

“Recently we have seen a growing interest in fast Fords, and the prices have risen to record-busting levels. I can’t recall there ever being a Ford prototype coming to auction, and I can’t see this happening again. This is a very special and rare RS500 that presents very well and is a car that can be driven, enjoyed and is a great addition to any collection.”

The one thing that could keep the sale price the right side of insane is the mileage: this car has completed 42,379 miles. How refreshing is that? It also means that you won’t feel too quilty taking it for a post-auction dawn raid. We can think of worse ways to spend a summer Sunday.

Forget Harry and Meghan, because the RS500 is fast Ford royalty. But don’t worry if you can’t stretch to chassis number one, because it’s one of four Sierra Cosworths available at the Silverstone Auctions May Sale.