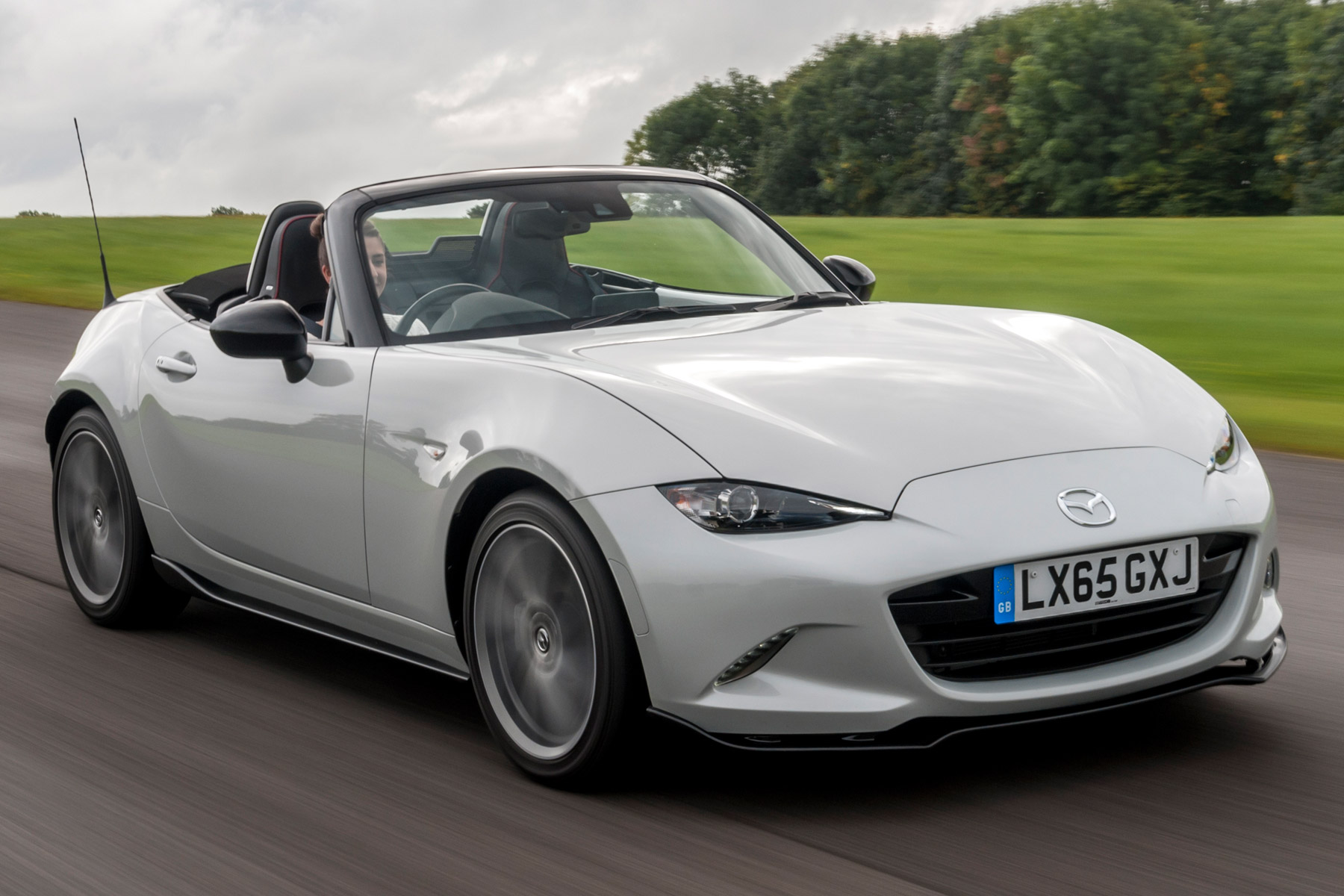 This is the daddy of MX-5s. For £1,000 more than the 2.0-litre Sport Nav on which it’s based, buyers of the Sport Recaro get some fancy black front, rear and side skirts, unique 17-inch alloys and a black rear spoiler. It’s limited to just 600 units, with each getting a number plaque in the interior. Inside, you’ll find heated Recaro seats, along with lots of Alcantara and red stitching. 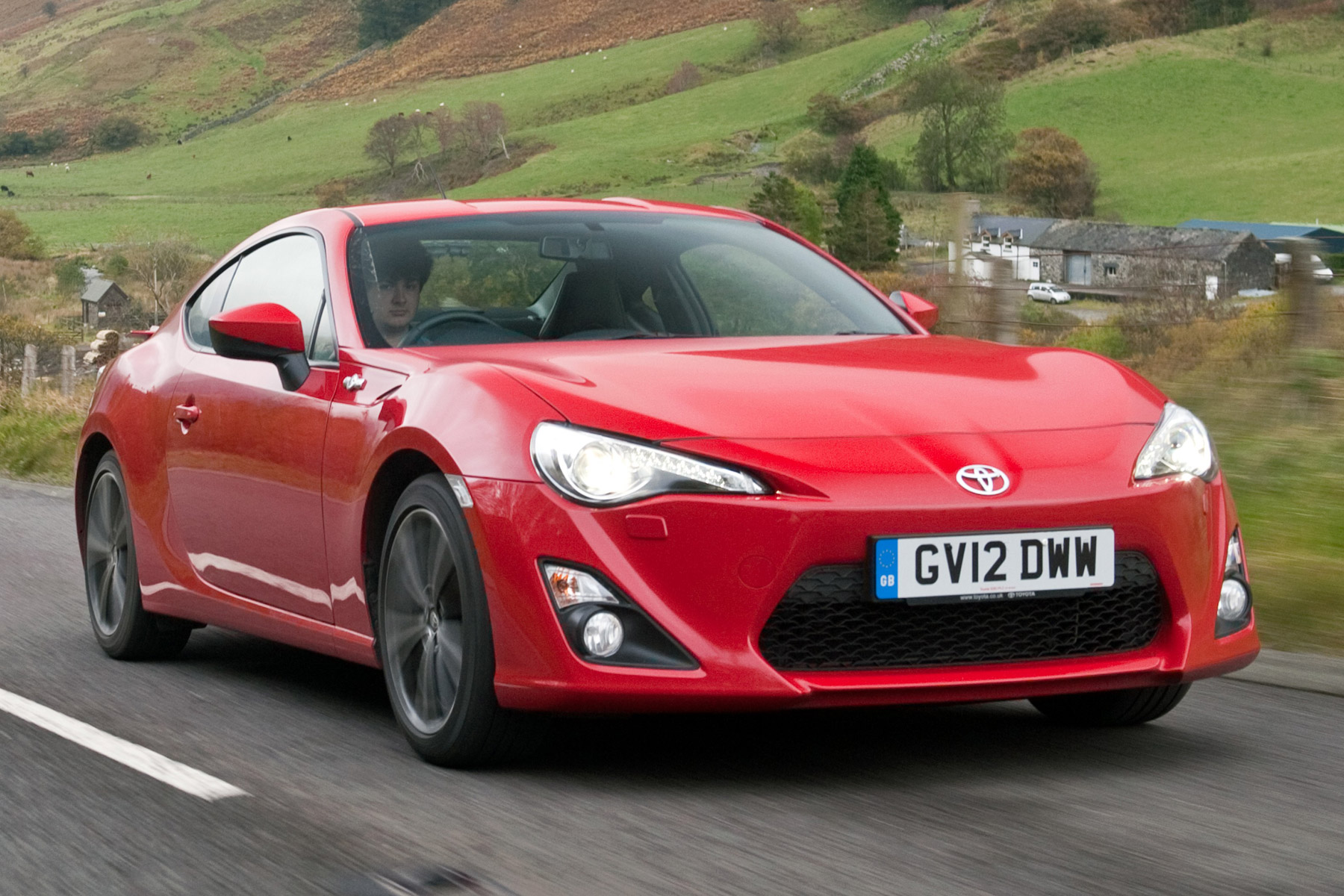 There’s not much on the market that offers quite the same recipe as the MX-5 for the money. There are other convertibles, such as the Audi TT and BMW Z4, but they’re more upmarket and don’t offer quite the same driving experience. Its closest rival, arguably, is the Toyota GT86 – but that isn’t a roadster. At £24,295, the Sport Recaro is bordering on hot hatch territory – and that could prove problematic. 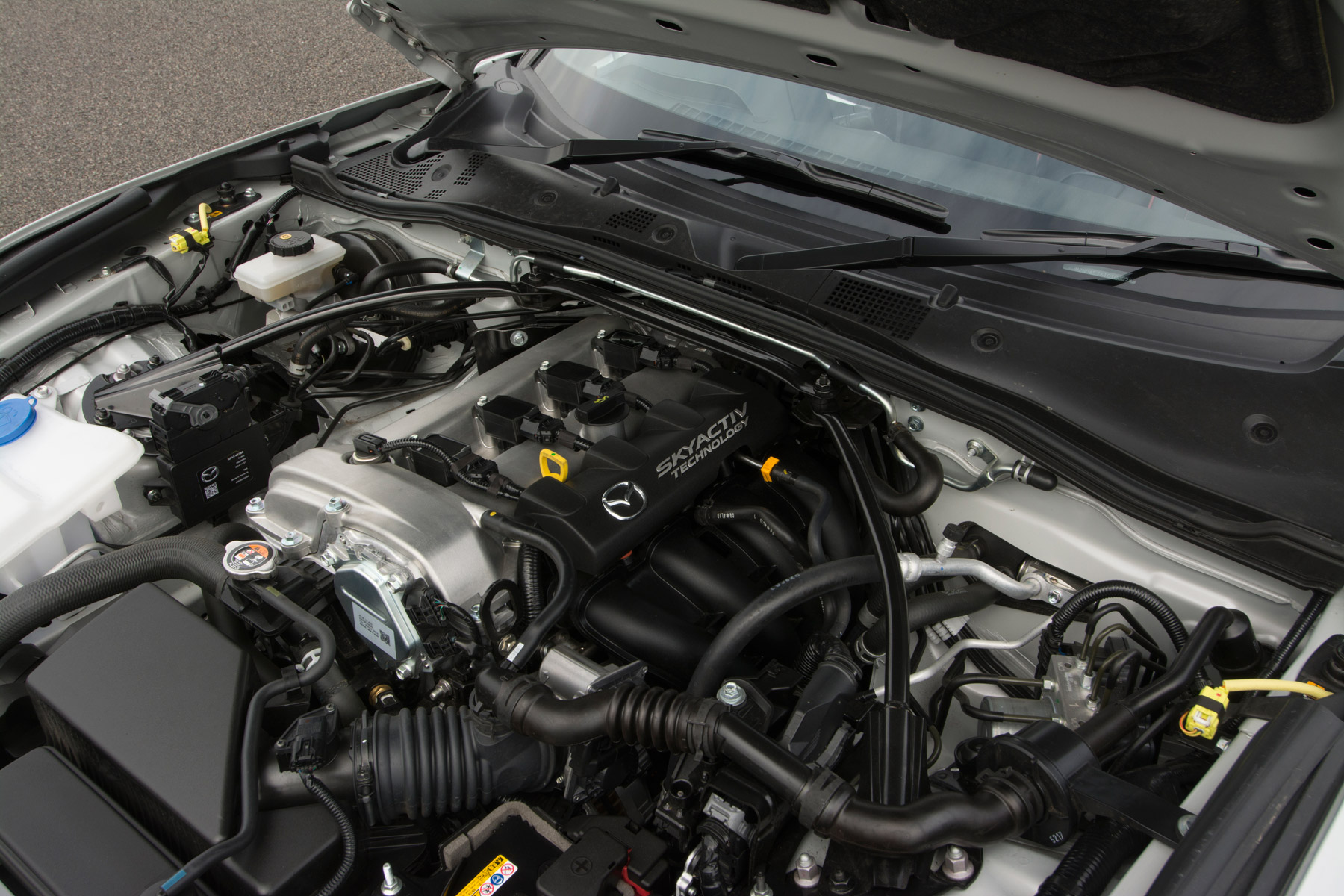 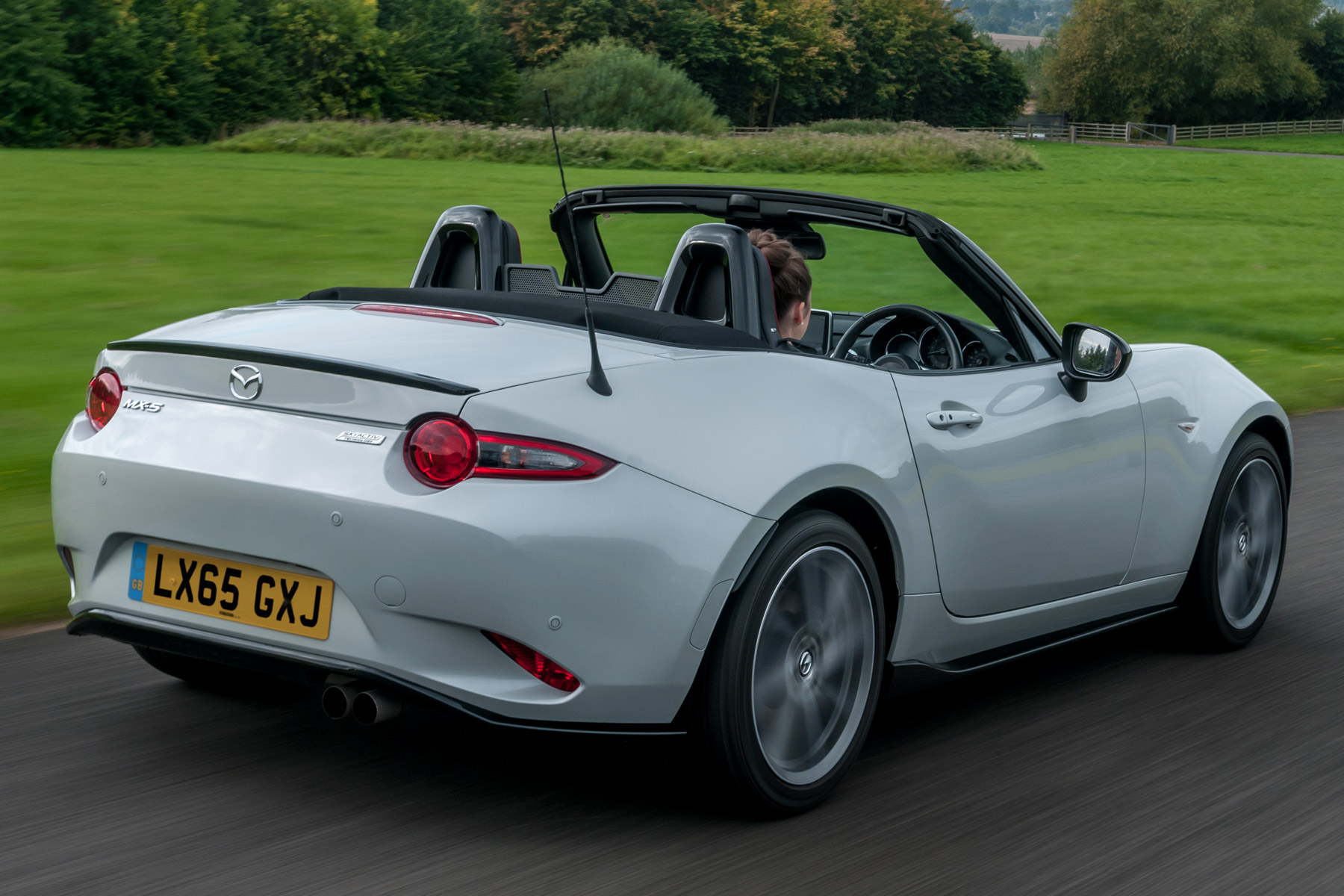 It drives the same as the regular 2.0-litre MX-5 – which is a very good thing. Even with the extra Recaro bits bolted on, it’s still exceptionally light, and handles incredibly well thanks to its 50/50 weight distribution. The steering is almost too communicative – while it’s great for knowing exactly how much grip it has left (often not a lot, if you provoke it), it can make you unduly nervous when driving in the rain.

One thing Mazda’s got spot on with the new MX-5 is its gear change. It’s one of the slickest changes of any modern car, with a 40mm throw (the same as the first-generation model of 1989), and feels superbly weighted. You’ll end up changing gears for fun – especially as the pedals are perfectly spaced for blipping the throttle on the downshifts. It feels so right.

While some reckon the smaller 1.5-litre engine provides a purer driving experience, we think the 2.0-litre provides the power most buyers will expect from a sports car such as the MX-5.

And being a sports car, the MX-5 isn’t the most pleasant experience on longer journeys. Sacrifices have been made in pursuit of that low kerb weight – so there’s more wind noise than we’d like, and the engine doesn’t have a particularly pleasant note in the middle of the rev range. 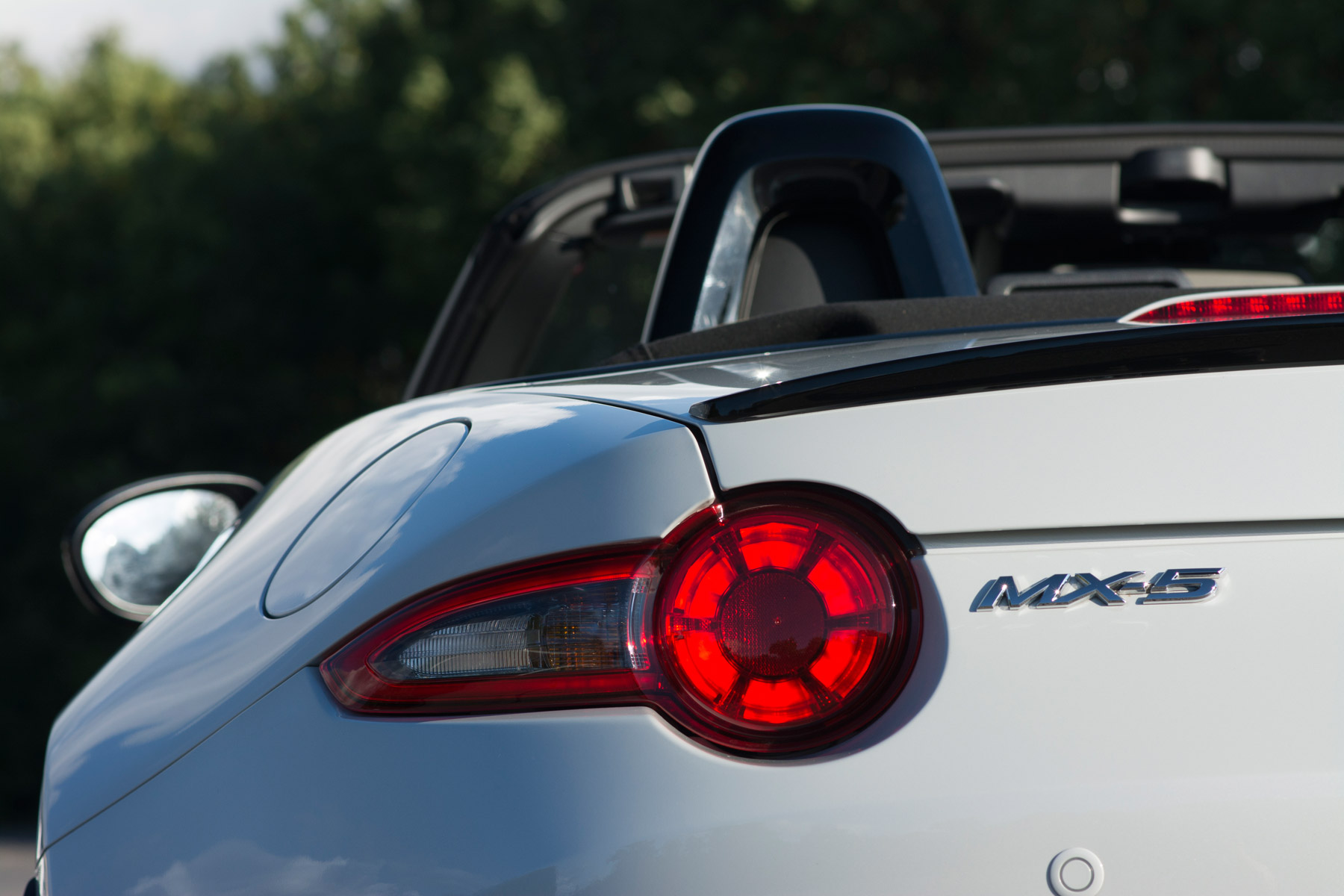 The appeal of the MX-5 compared to more serious sports cars is its affordability – and that extends to its running costs as well as purchase price. Servicing costs should be sensible, while the 2.0-litre officially returns 40.9mpg. While you won’t see that if you drive it hard, our experience suggests the MX-5’s real-life fuel economy shouldn’t be much worse than that. 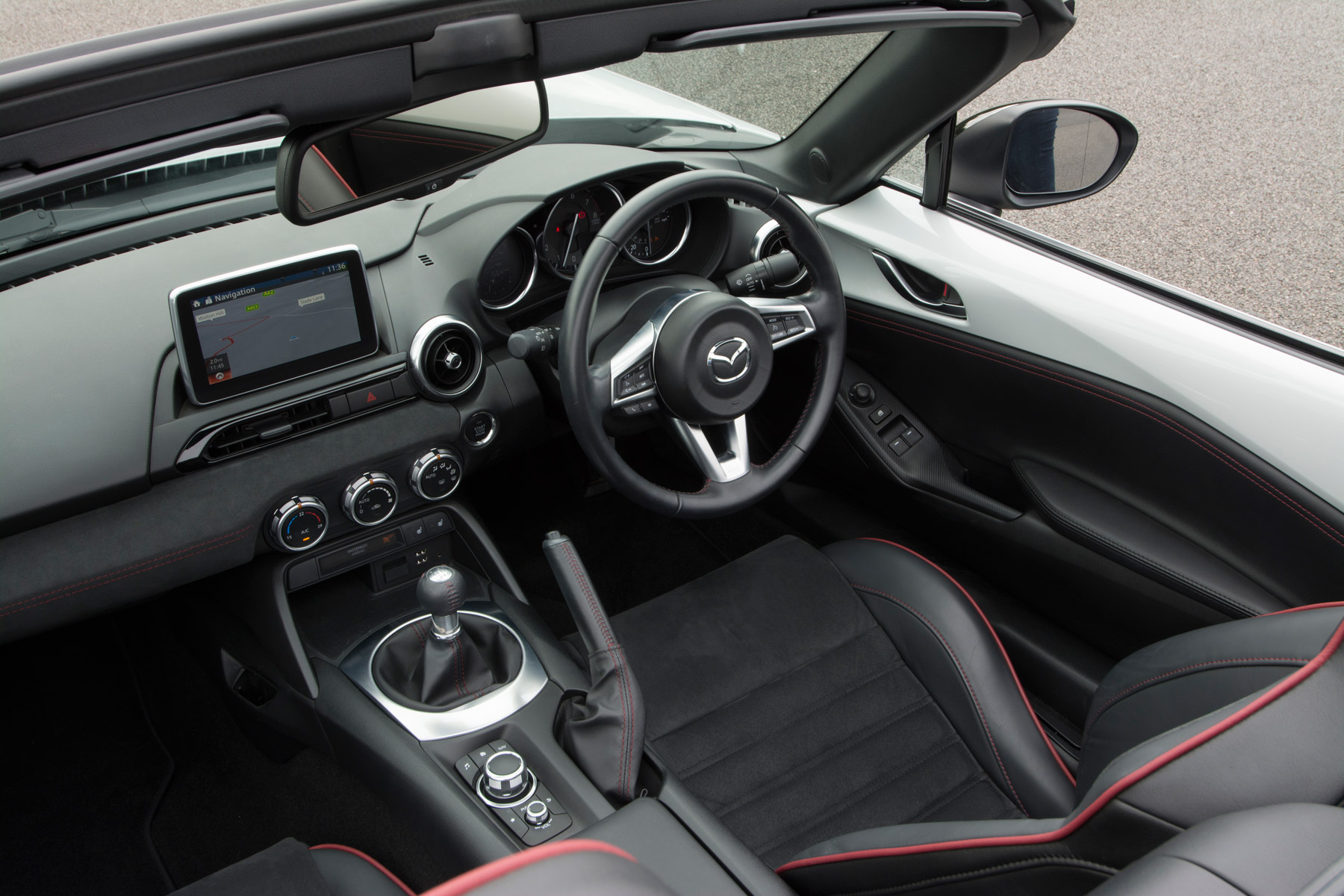 No, not really. The cabin is tiny, and any driver over about six-feet will find the driving position a bit cramped. Luggage space is very limited, too – the boot is big enough for a weekend bag or two, but you’ll struggle to find somewhere to put your phone inside. There’s no glove box… not a problem if your MX-5 is a track day toy, but as an everyday proposition? We wonder if the engineers behind the MX-5 have been a little too focussed. 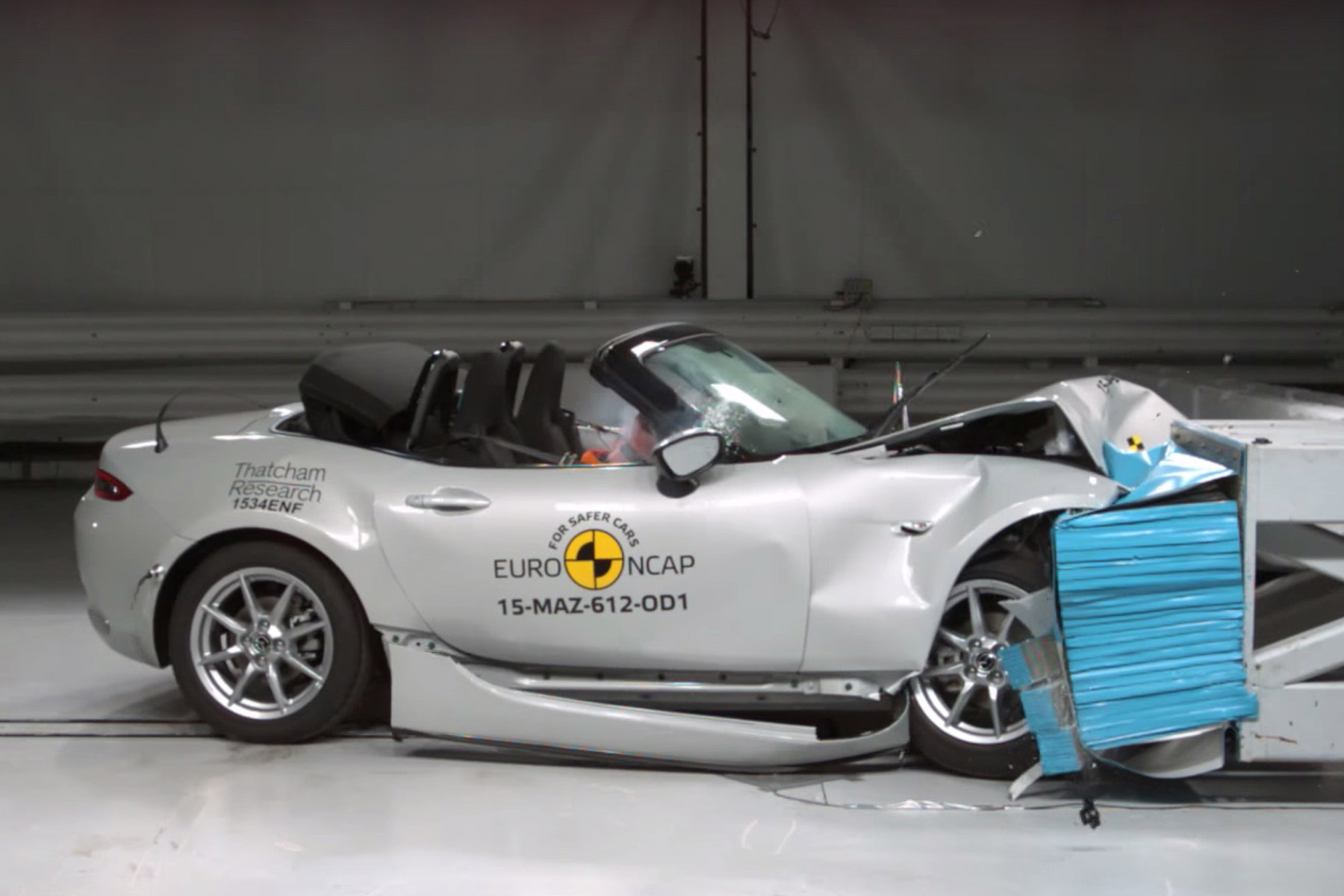 The Mazda MX-5 fell short of achieving the full five-star Euro NCAP rating because it lacked technology such as autonomous braking. Like the Sport Nav on which it’s based, the Recaro comes with features such as blind-spot monitoring and lane-departure warnings. A bit pointless, we reckon, as people don’t buy an MX-5 for unnecessary safety tech… 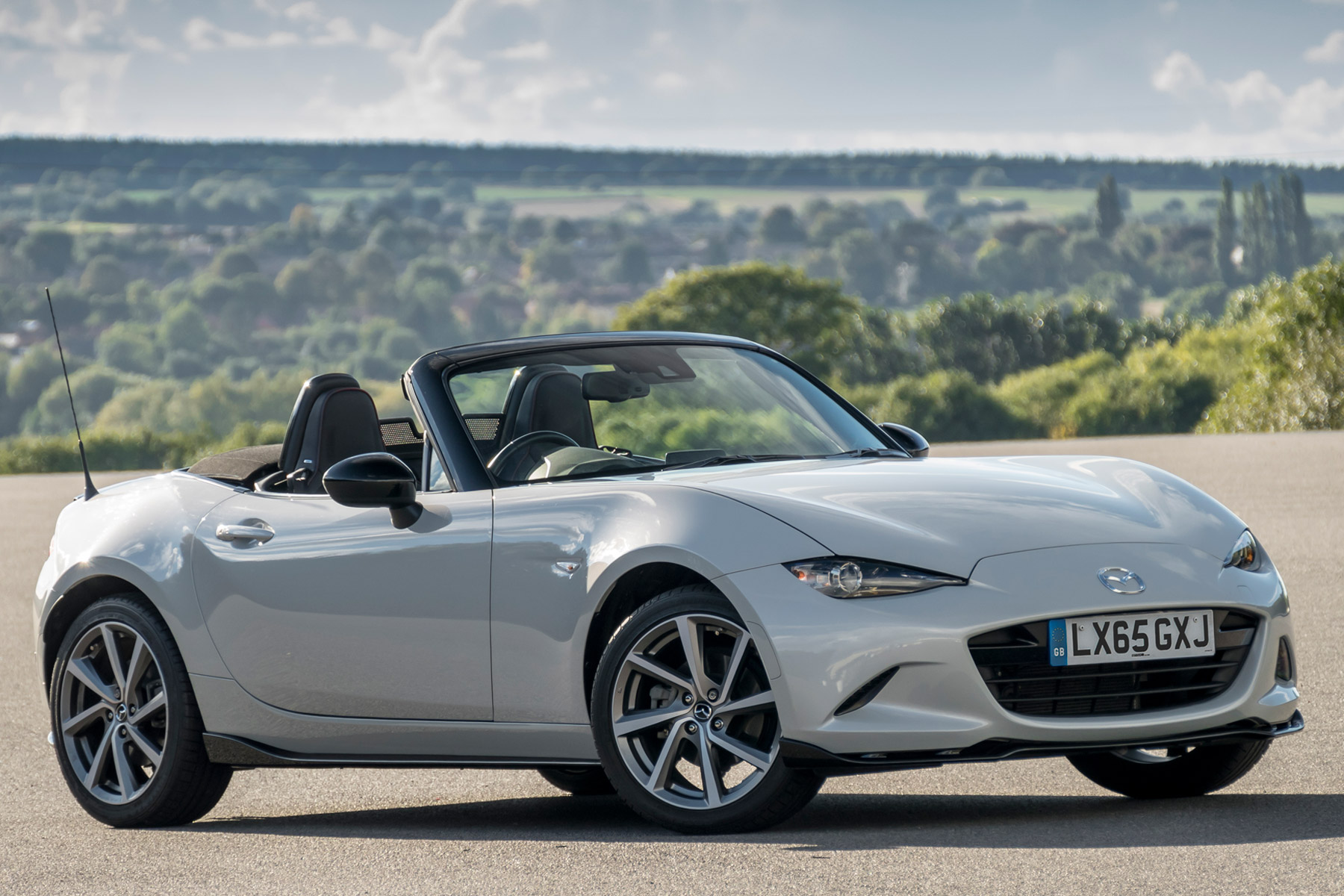 We’d buy the cheapest 2.0-litre we could find (nearly-new examples are cropping up for £19,000), and take it straight to tuning specialist BBR for its ‘Super 190’ upgrade pack. That’s much more fun than a factory model with a few extra bits of trim. 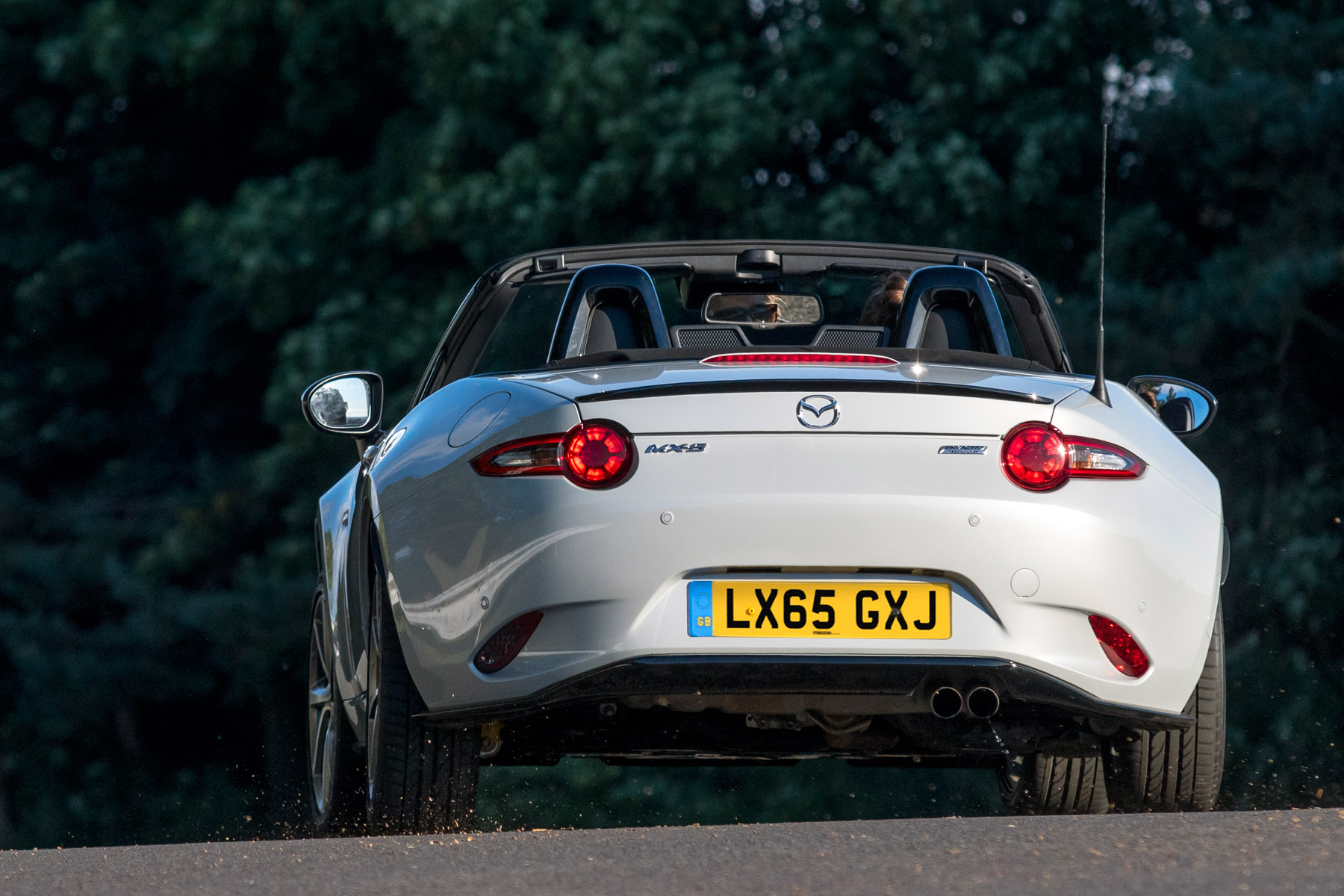 If you’re one of those rare people who still find enjoyment in driving – particularly along twisty, empty B-roads, the MX-5 should be very high on the agenda. The Sport Recaro’s biggest issue is its price. It’s still fairly good value at £24,000 – especially compared to hot hatches such as the Volkswagen Golf GTI, but most would expect greater refinement for the money. 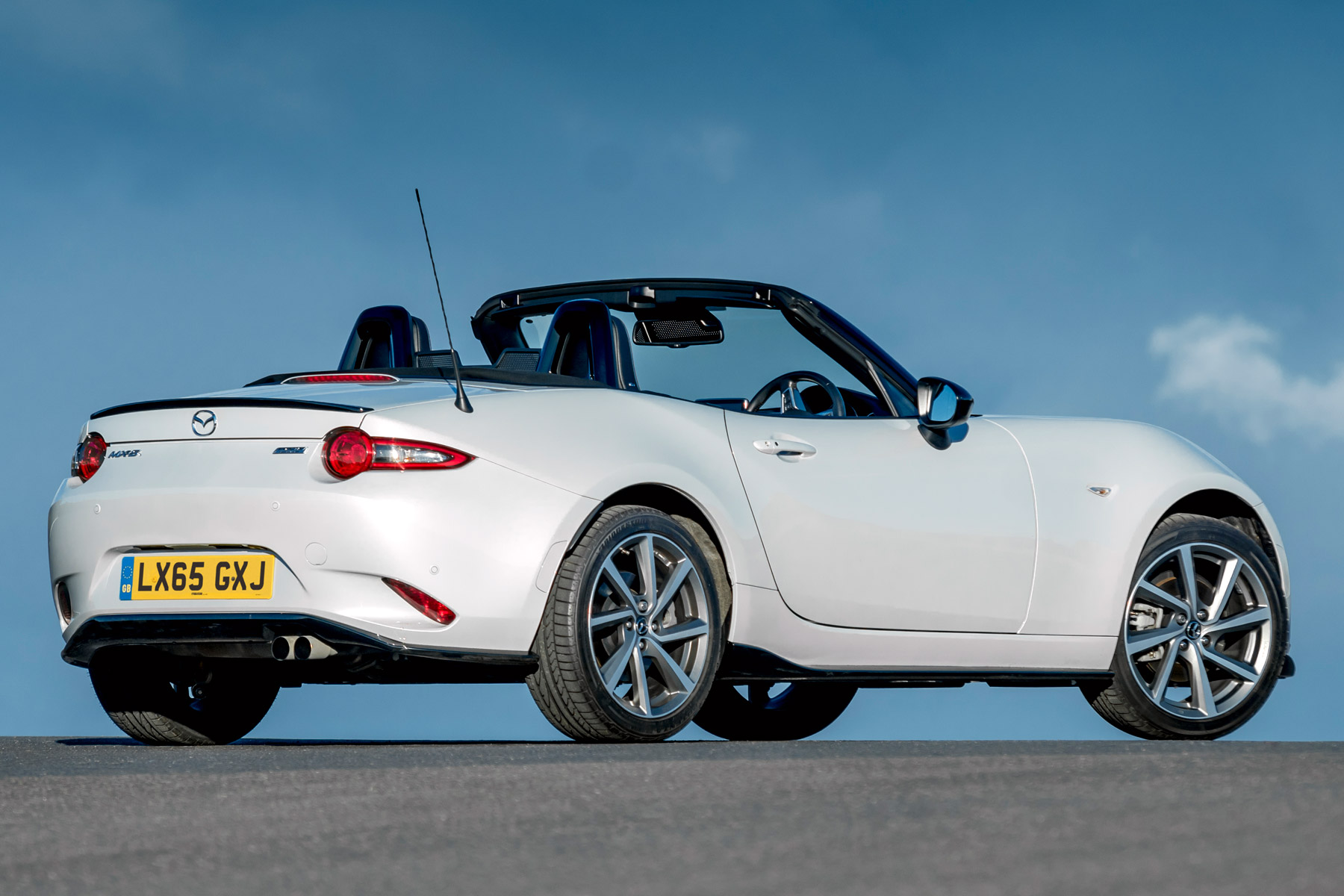 The MX-5 has quite a curvaceous rear – but that isn’t just for looks. By having such a large rear bumper, the rear boot lid can sit fairly high (and flat). This increases downforce without the need for an ugly spoiler. But Mazda’s stuck one on the Recaro edition anyway.