We go sideways in Volvo's police-spec V90 on a frozen lake in Sweden. And we discover what makes it different to a normal car. 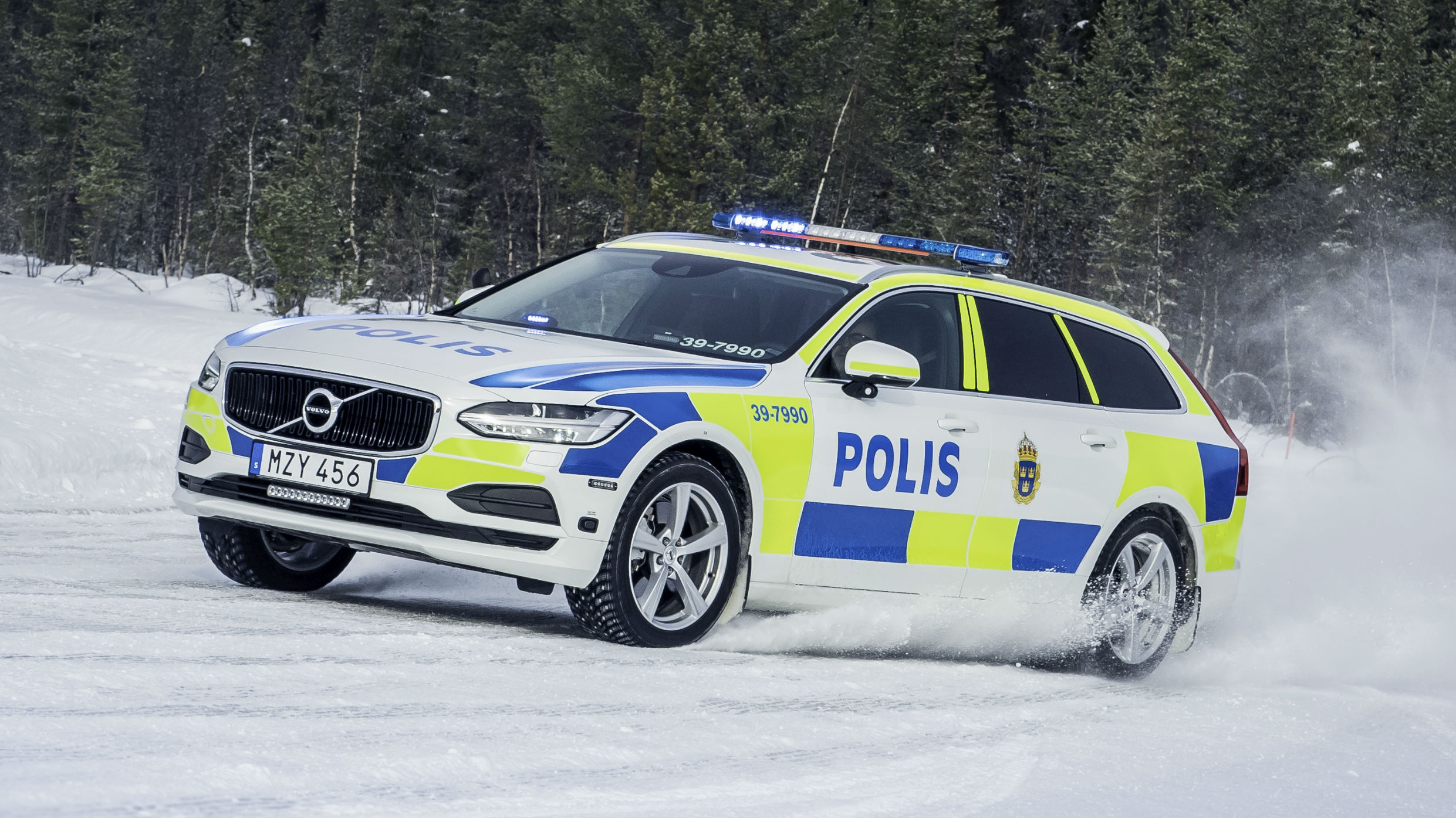 Volvo has a history with police cars. The Swedish company has been building them since 1929 – and selling them to the British police since the 1960s.

In recent years, police-liveried Volvo V70s were a familiar sight on UK roads, either as traffic cars or armed response vehicles. Now the newer, boxier V90 has started to take its place.

Here it is in Swedish livery, being tested at a top secret military base, somewhere in the Northern Circle. We say ‘tested’, but that’s actually me living out a childhood dream of driving a police car. On a frozen lake. And mostly sideways.

What’s the point of that? 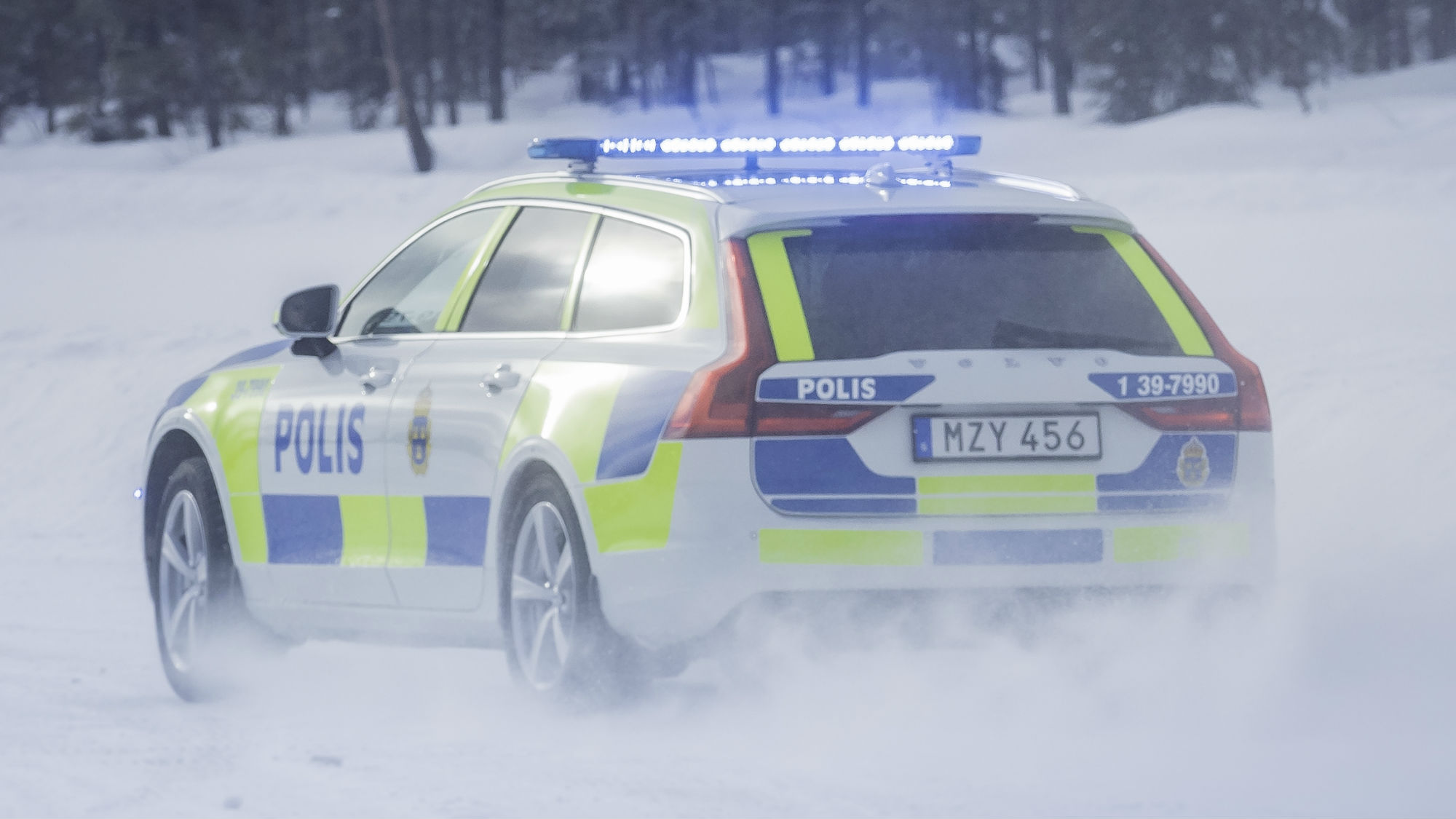 It’s not all in the name of fun and frolics. Honestly. Volvo’s test drivers spend at least 500 hours putting the latest police cars through their paces in hot and cold climates.

The logic goes that if it can survive being driven hard in temperatures way below zero degrees, a pursuit through Bradford’s housing estates won’t phase it.

What’s under the bonnet? 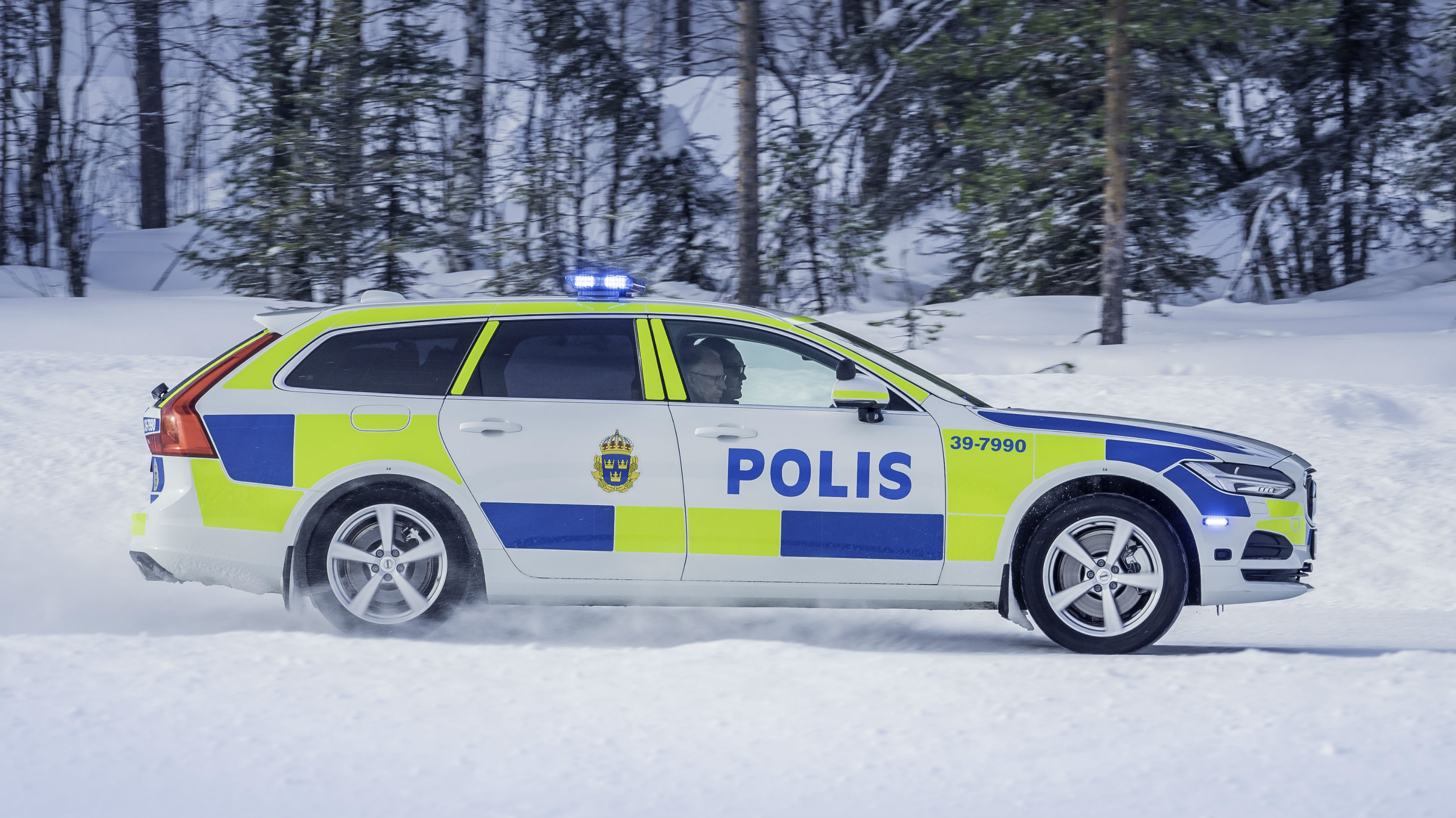 Under the bonnet of this V90 – and, indeed, all V90 police cars at the time of writing – is a standard four-cylinder D5 diesel engine.

The twin-turbo unit produces 235hp and, before all the extra weight of police equipment is added, propels the V90 to 62mph in 6.9 seconds. 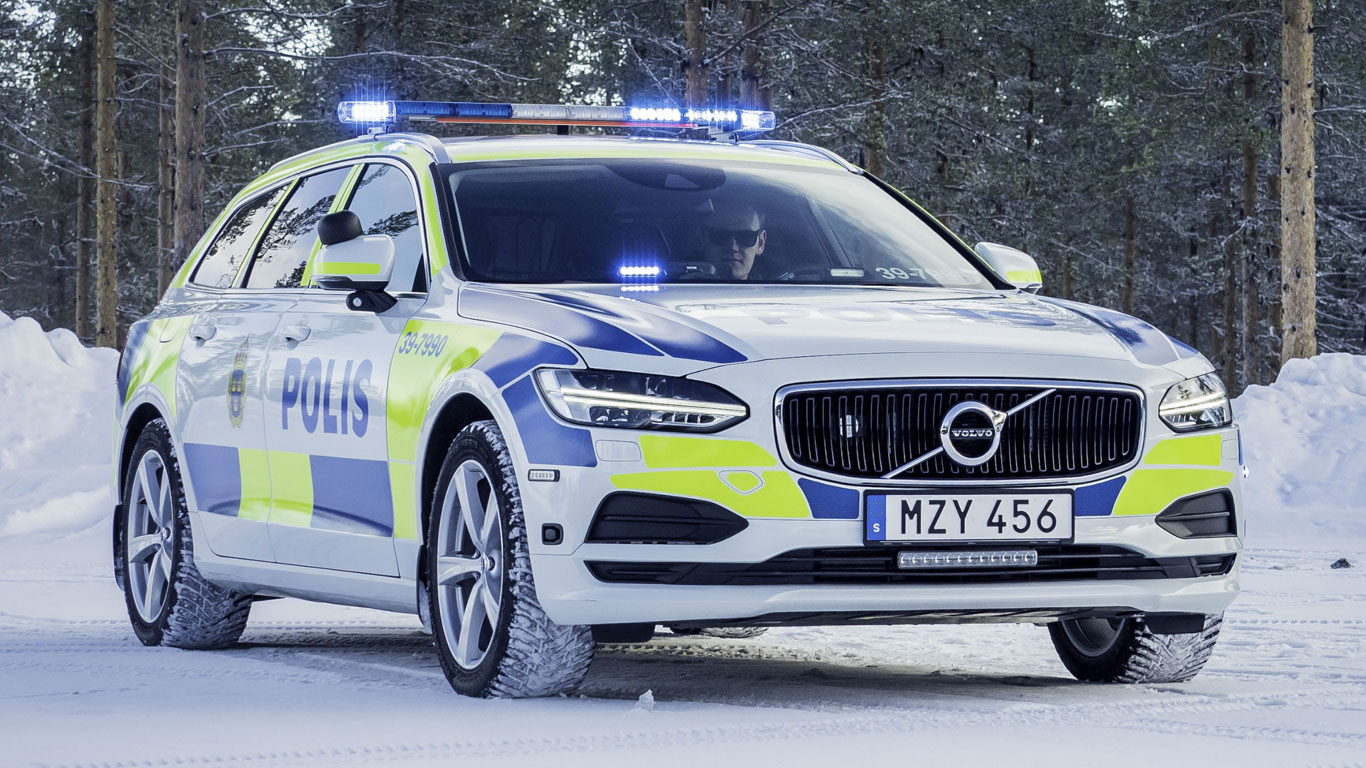 All Volvo V90 police cars start off as standard cars, taken from the production line at the same point ordinary models are shipped off to dealers.

But, rather than being loaded onto a transporter, police-cars-to-be are taken around the back of Volvo’s factory in Torslanda, near Gothenburg, and modified by its special vehicles division.

And what happens next? 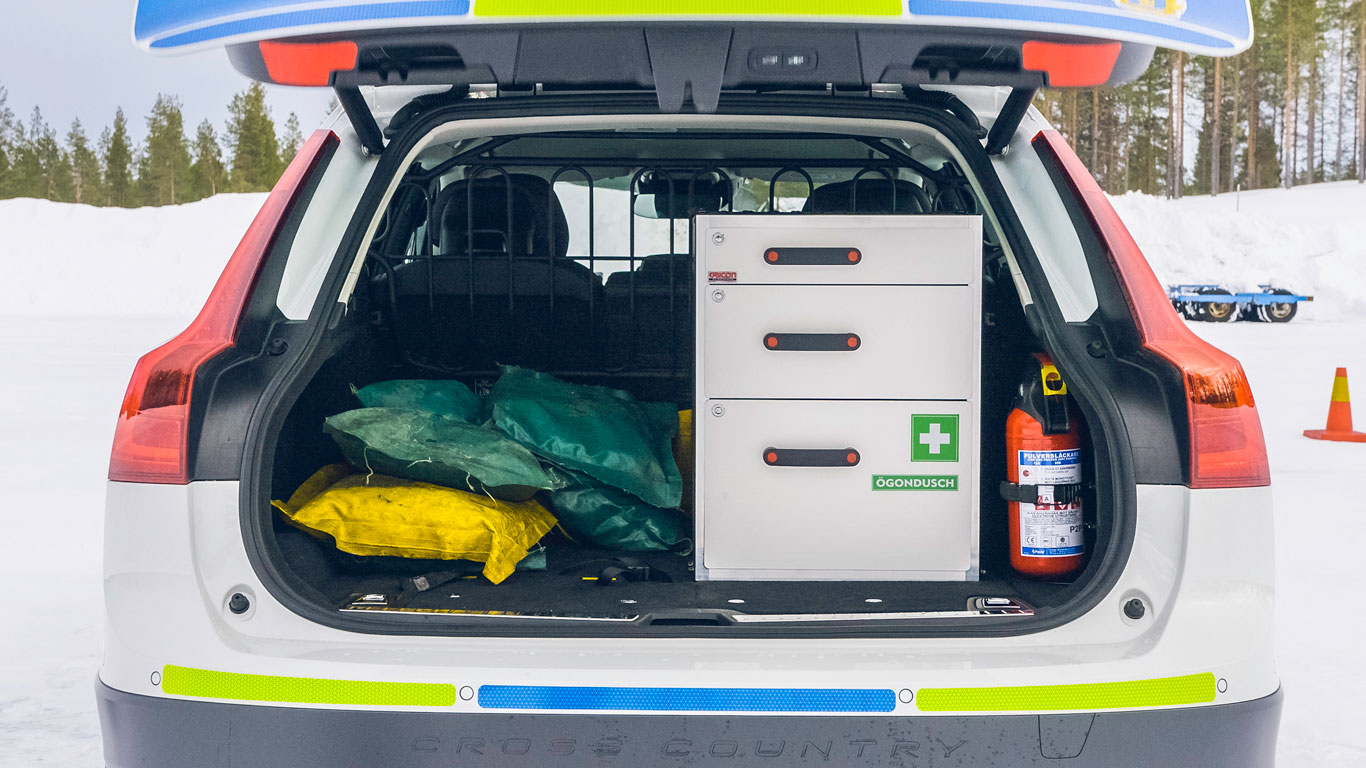 Here, a special team of converters spend around six days turning it into a cop car. A special boot frame is fitted to cope with all the gear carried by traffic officers (and prevent it flying forwards in the case of a rear-end shunt), while brakes are upgraded to bring the heavyweight V90 to a stop.

The suspension also gets upgraded, with a 300mm lift and firmer dampers. The wheels are replaced by XC90 alloys.

Is anything done in the UK? 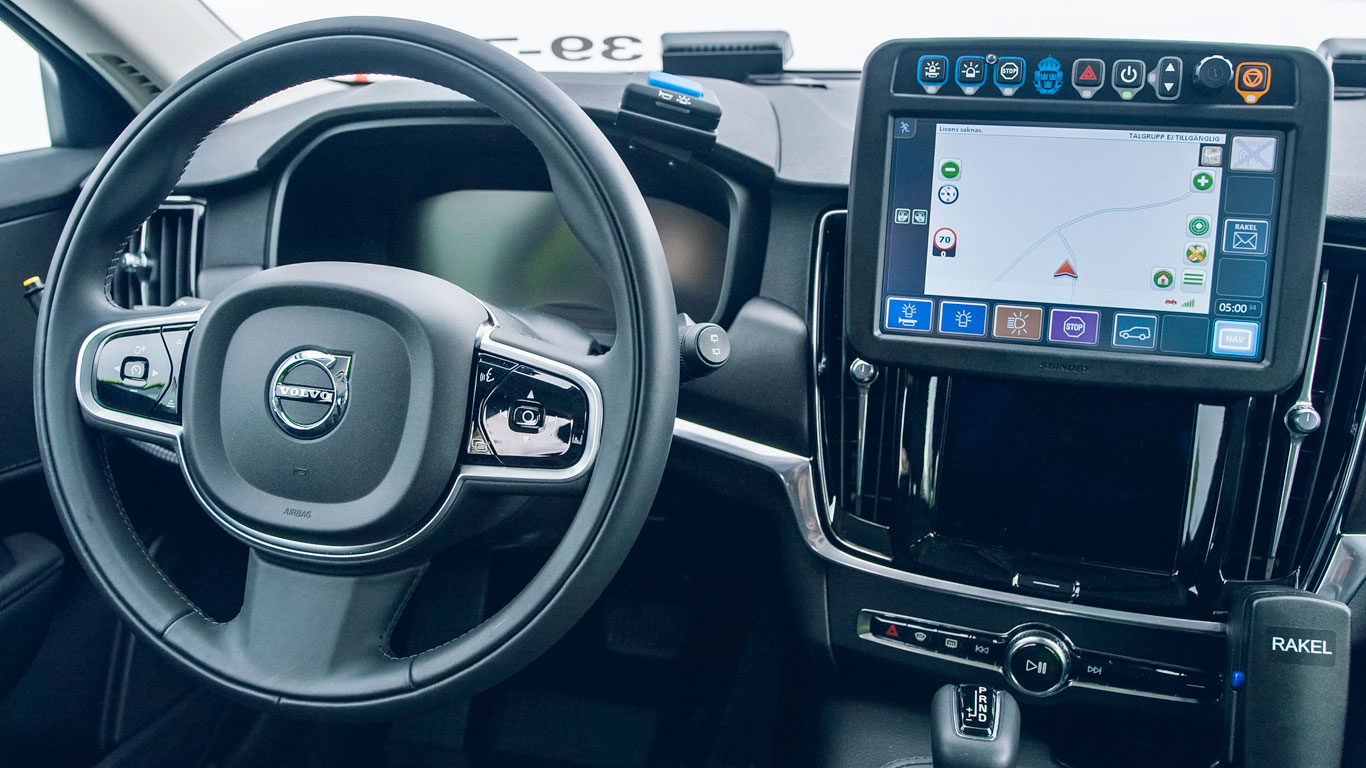 Once police cars arrive in the UK, they’re sent to one of a small number of specialist converters where the finishing touches are put in place.

The correct radio is fitted, for example, while British ‘battenburg’ livery is applied to make them stand out.

Why are they so close to standard? 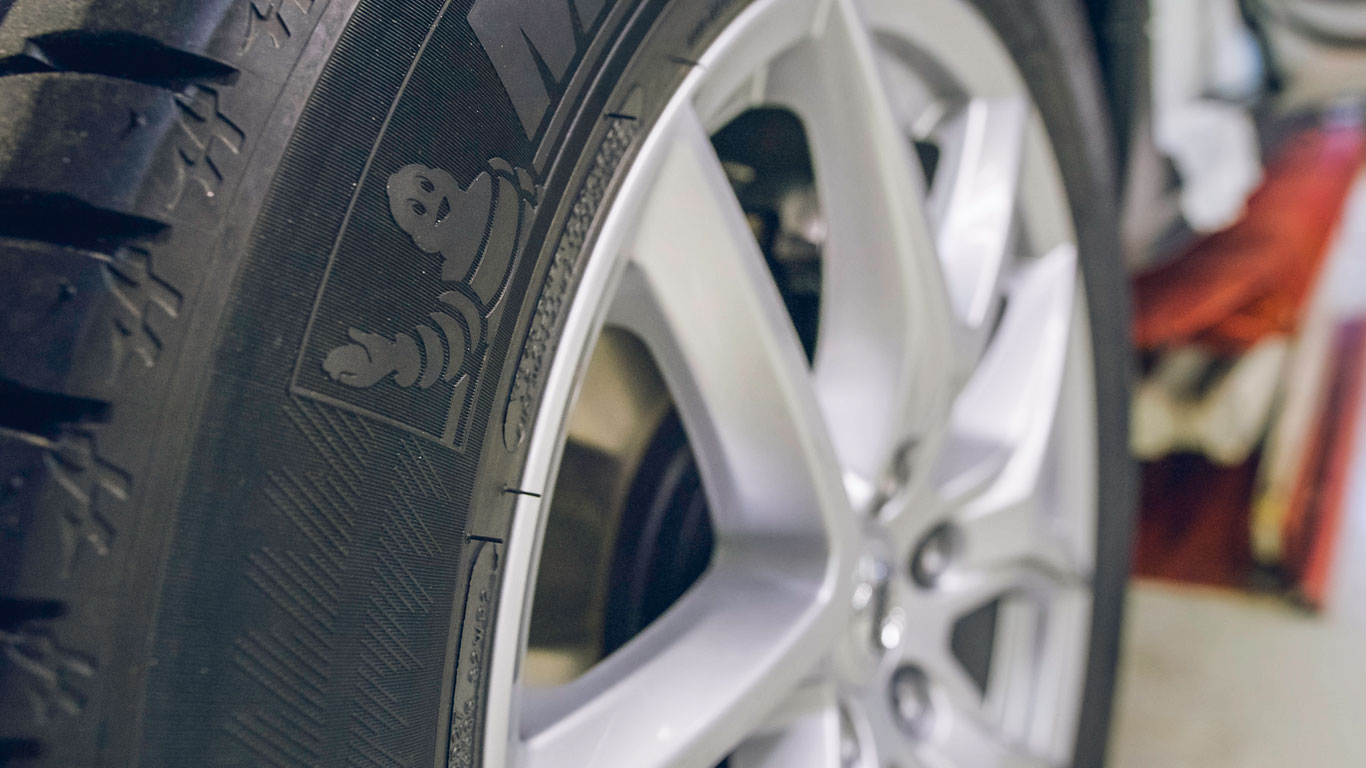 Police cars are generally bought outright rather than leased, so police forces want to be able to get as much of their investment as possible back when it comes to resale time.

As such, once you remove the kit fitted by Volvo’s special vehicles workshop, the V90 is like pretty much any other model.

It looks rather luxurious inside 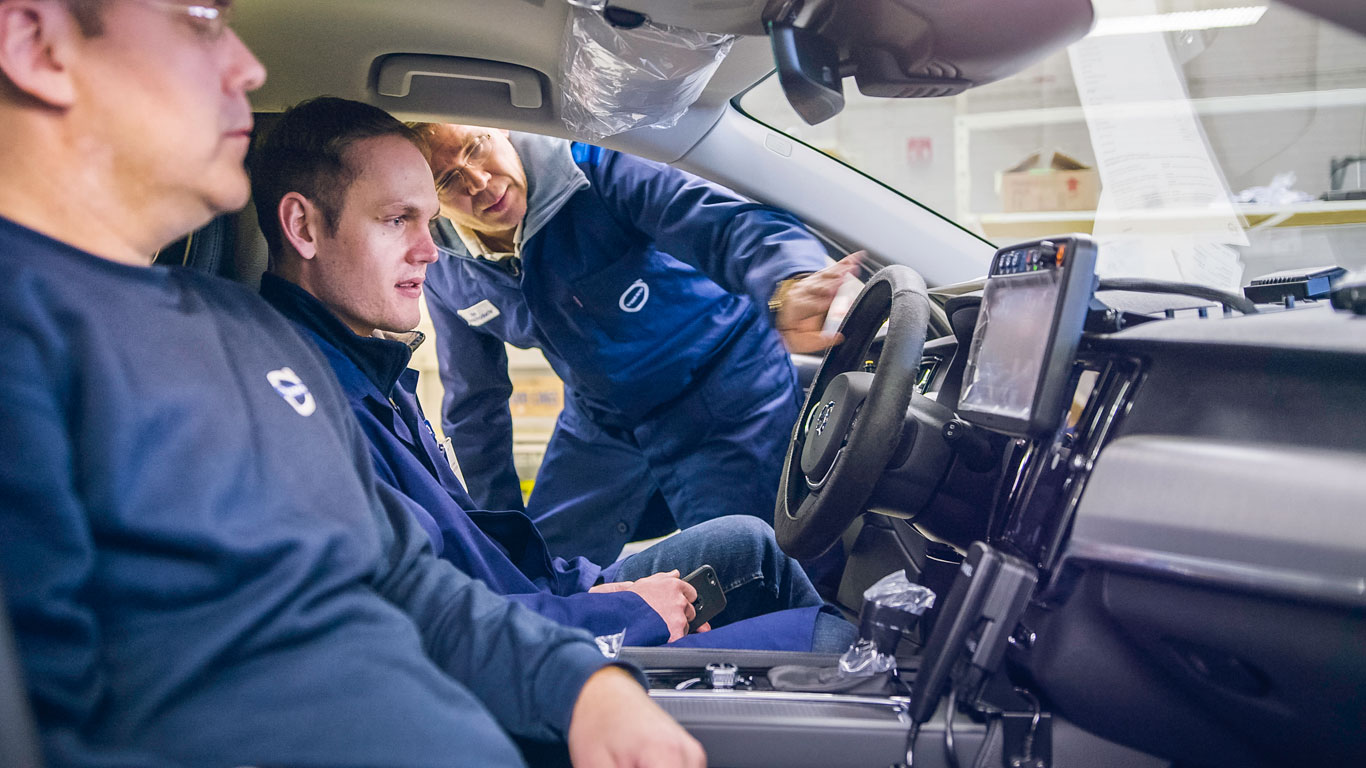 Inside, it’s exactly as you’d expect a high-spec V90 to be. Leather seats are fitted (they wear better than cloth and are easy to wipe down), while the standard infotainment system is left in place.

The aftermarket computer that controls the blues and twos, as well as having its own sat-nav feature, is hinged to cover the standard system, but can easily be lifted up.

Does it have holes in the roof? 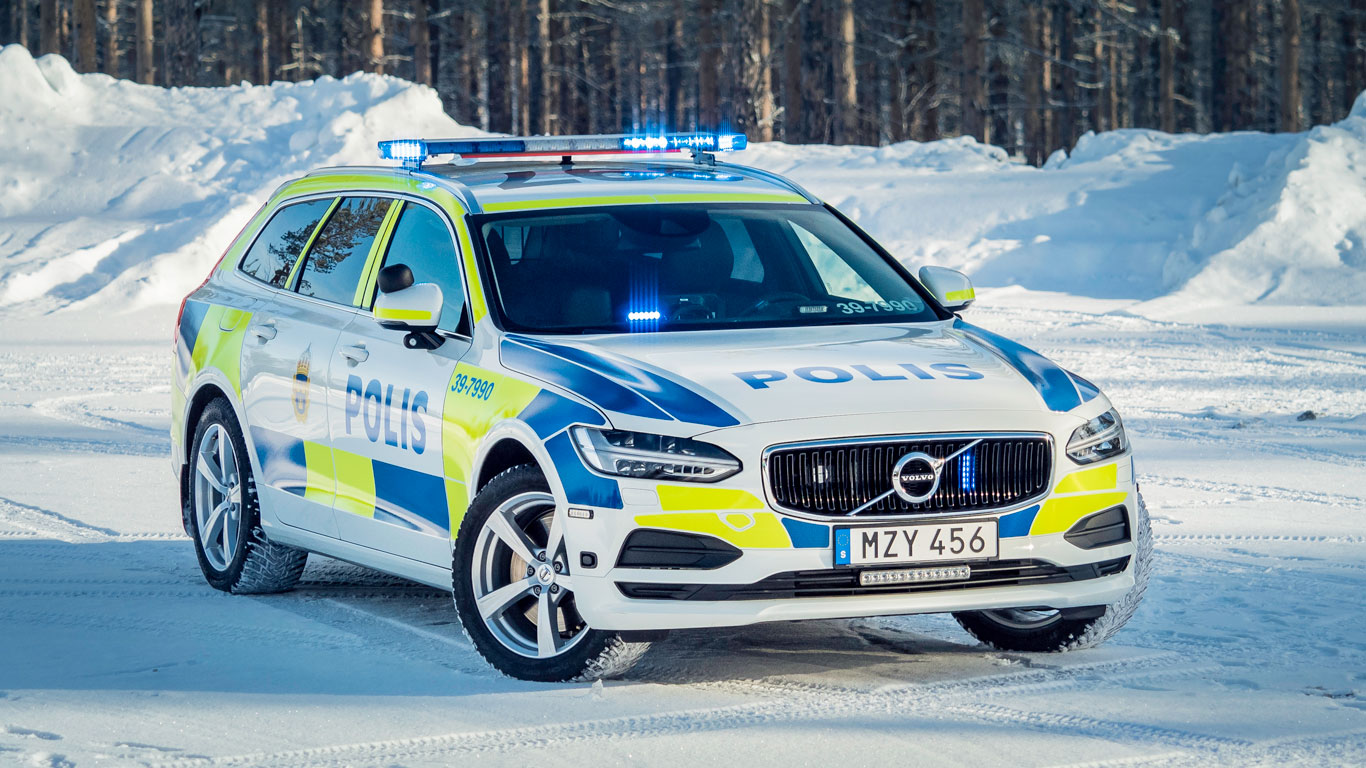 You used to be able to spot an ex-police car by holes in its roof where the lights were fitted. That’s not the case any more… everything is flush mounted, and cabling for the LED roof lights runs through the roof bars.

All this helps when the police car has to be sold after retirement. 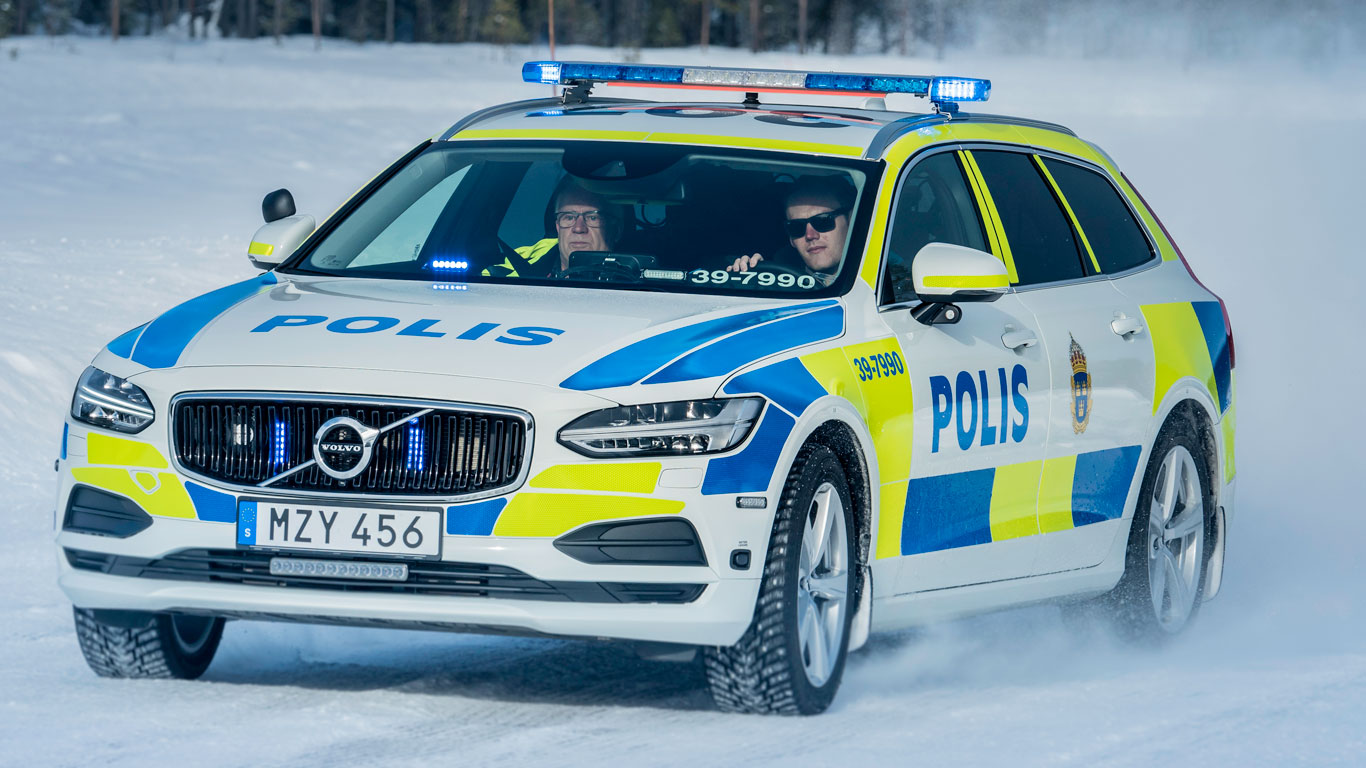 Now, budget cuts dictate they must keep hold of them for longer – as much as five years and several hundred thousand miles – so they need to be pretty robust.

How often are police cars serviced? 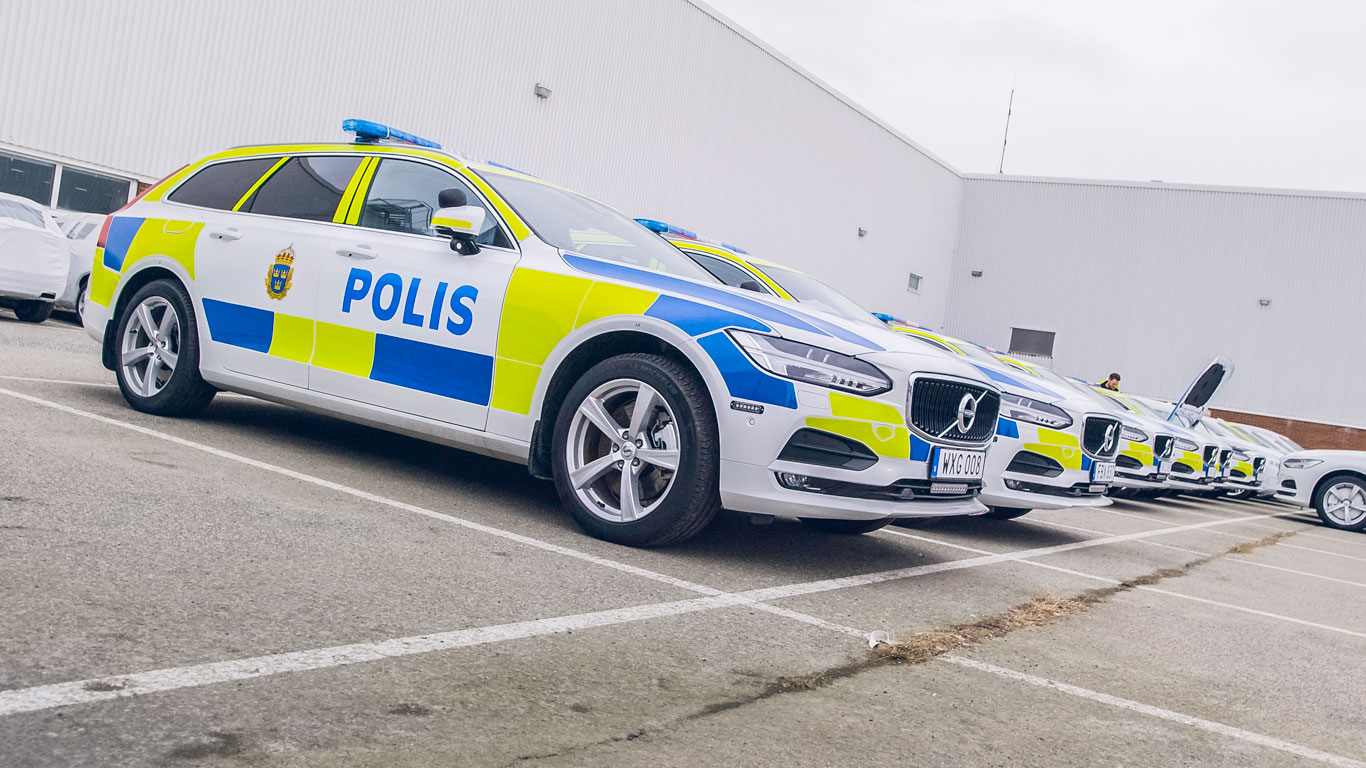 Most police forces have their own workshop for routine servicing, which is carried out regularly, while some even invest in diagnostic equipment to enable more serious work to be carried out.

Obviously, under routine police work the cars can be damaged fairly regularly – and for bodywork they’re usually returned to a local Volvo dealer.

What other challenges do forces face? 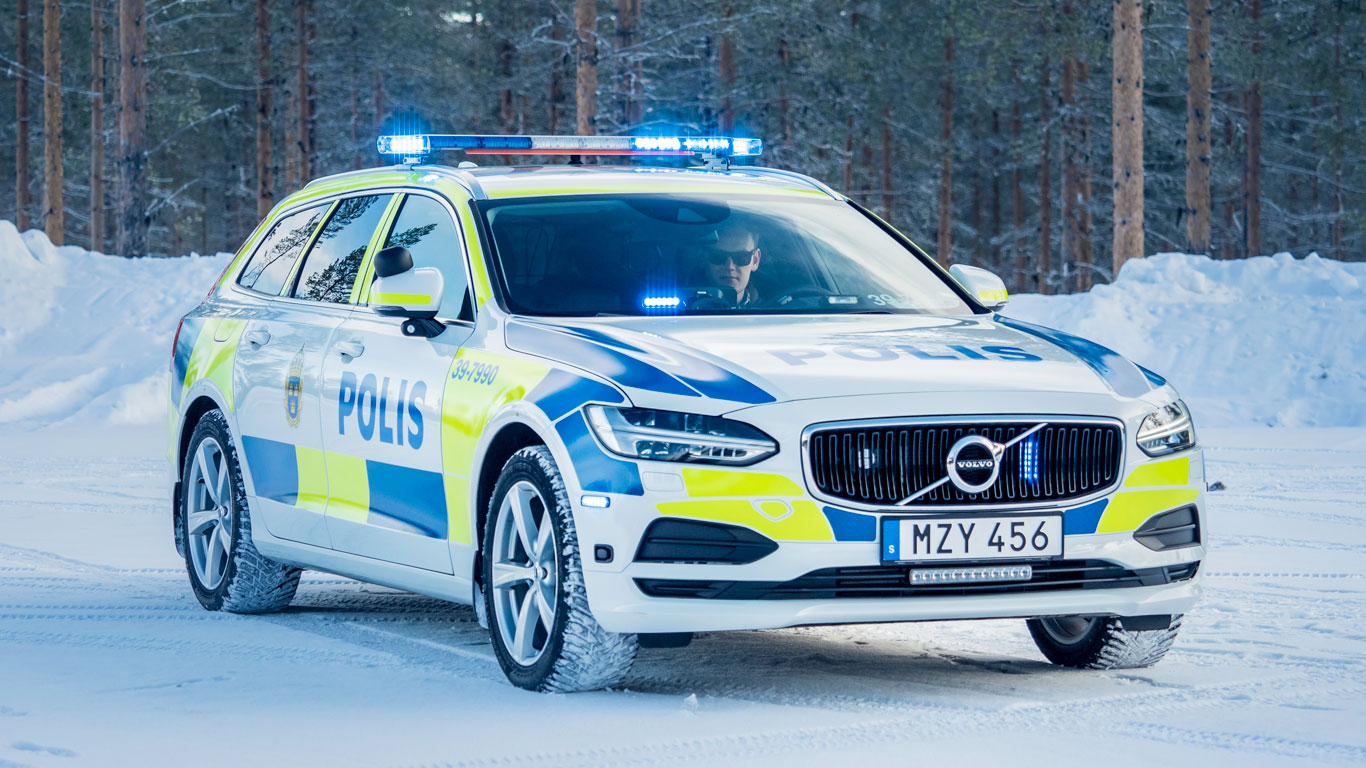 In recent times, all traffic cars were diesel, with police forces keen to save money on fuel. But as diesel becomes a dirty word and police need to be seen to be doing their bit, we’re seeing a shift towards petrol or hybrid police cars.

What about driverless tech? 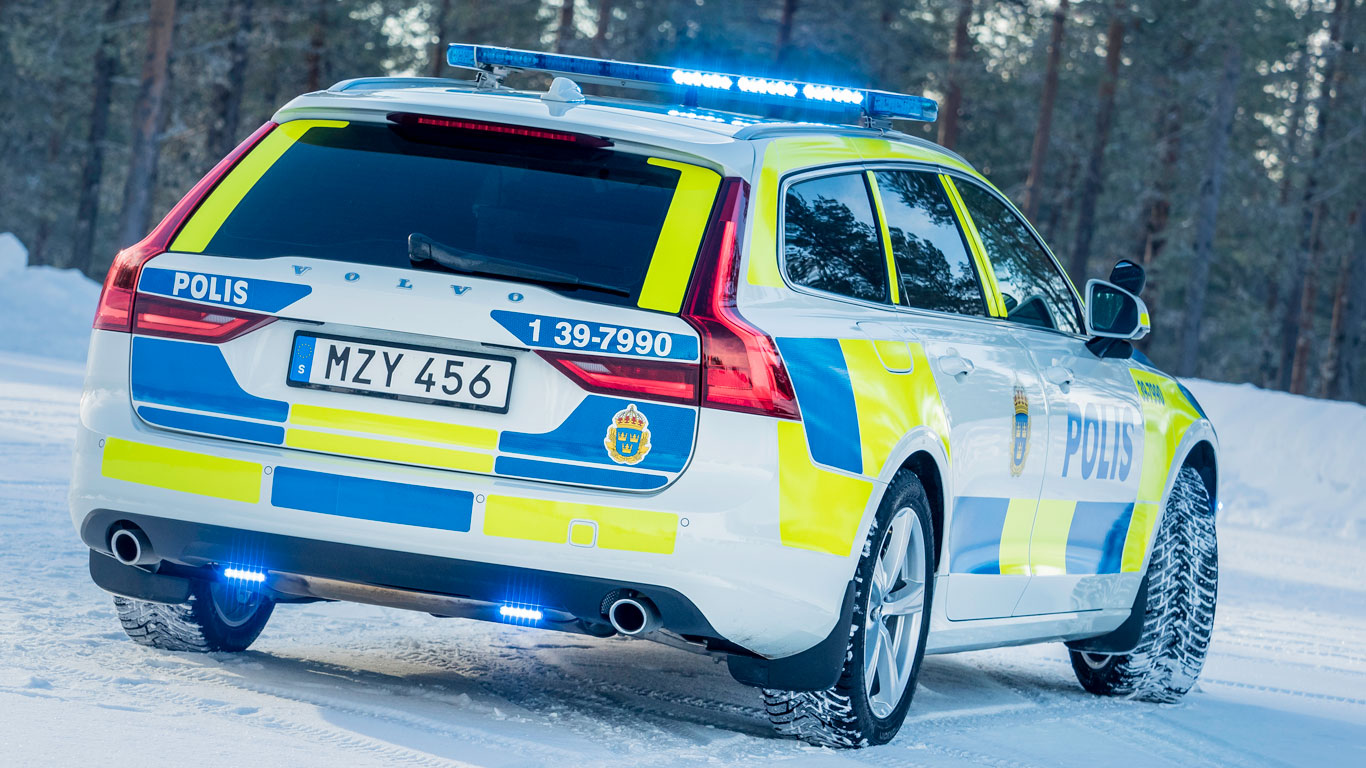 Volvo is big on autonomous technology, and safety systems such the firm’s City Safety automatic emergency braking could prove problematic.

If a car will do everything in its power to prevent a collision, how do police carry out tactical stops that involve making contact with other vehicles? Fortunately, for now, the technology can be turned off…

And in the future? 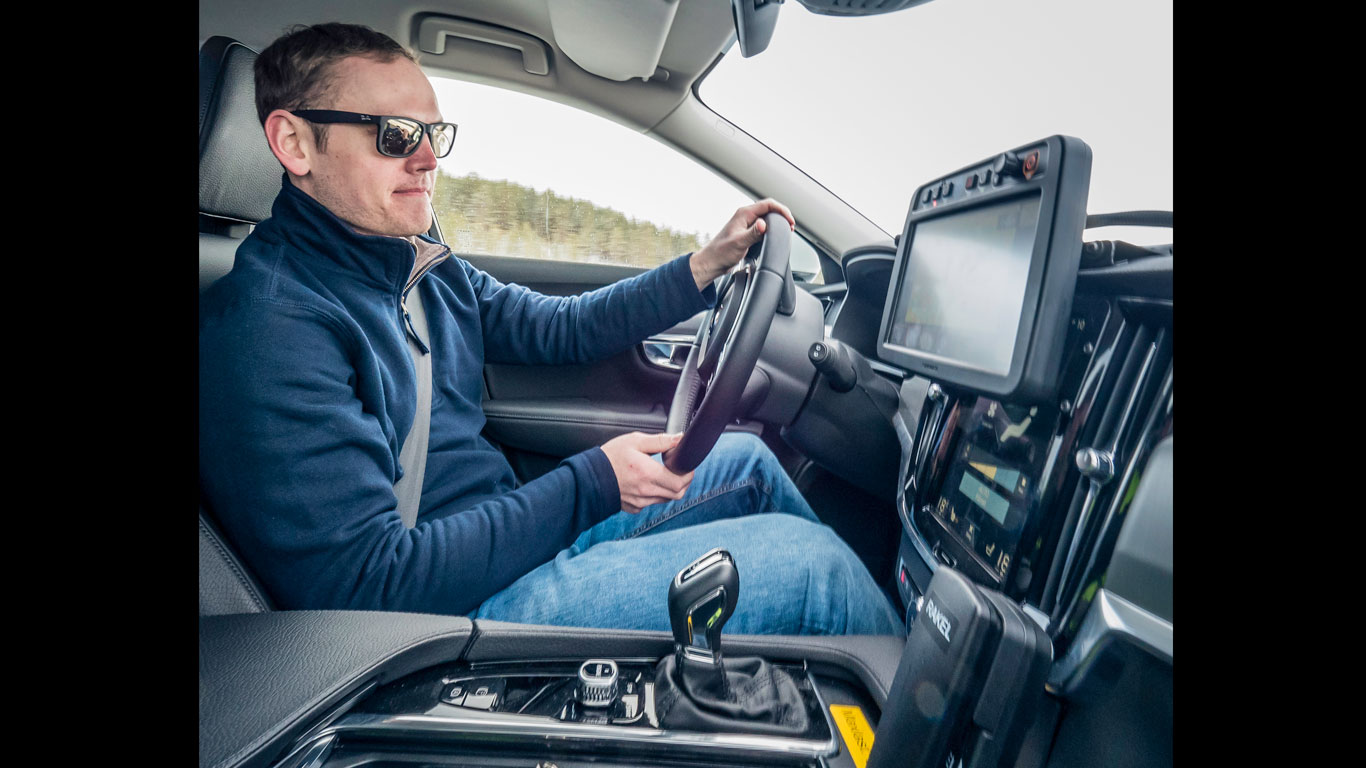 Who knows? Police cars are a tiny part of what Volvo does, so it won’t hold back on developing its driverless features for those rare occasions when traffic officers need to take control.

Will we see V90 police cars on UK roads? 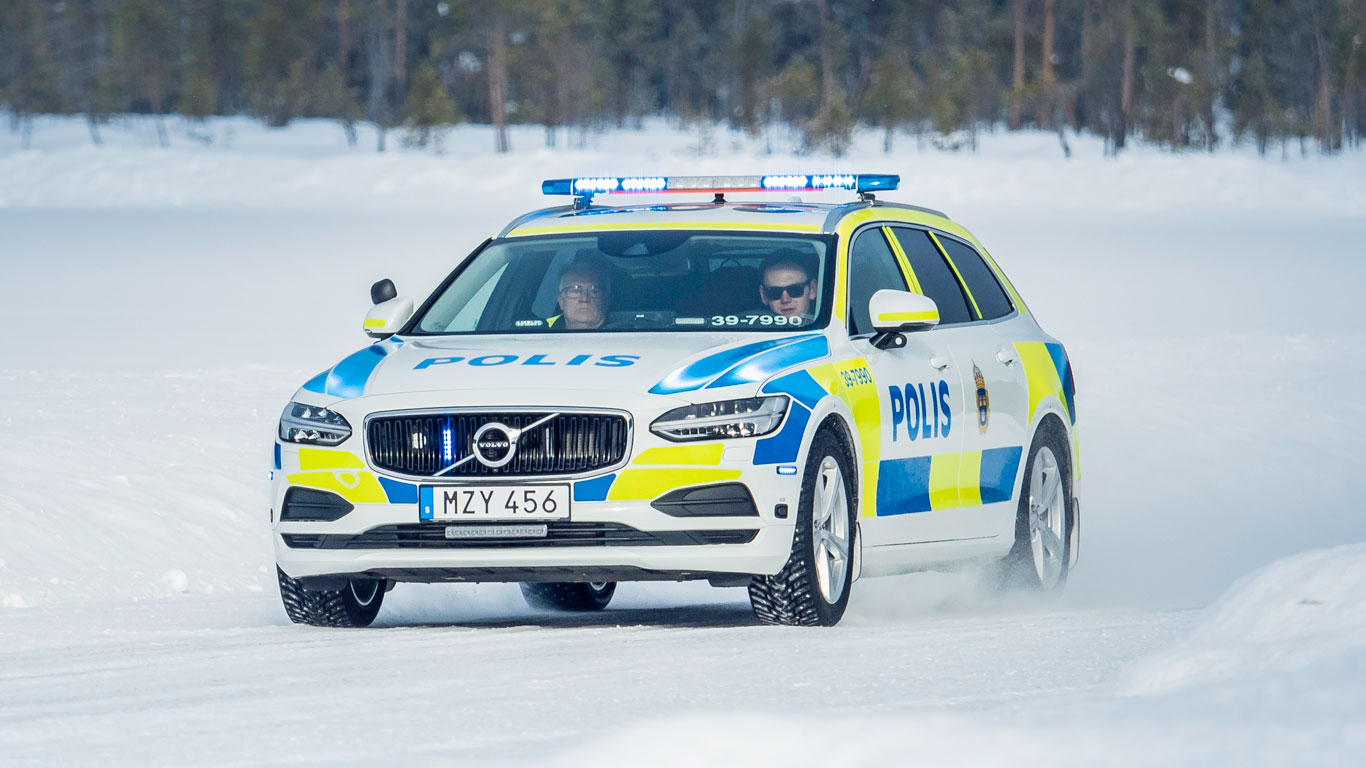 The V90 is now in service on UK roads, including with Kent Police and the Metropolitan Police in London.

Frank Stephenson’s car design CV stretches from the modern Mini to the McLaren P1. We ask about his career and what BMW has been drinking.
Read more
Features

Good things in small packages: the story of the Suzuki...

The Suzuki Jimny story starts in 1970. Here, we chart the history of the diminutive Japanese off-roader
Read more
Features