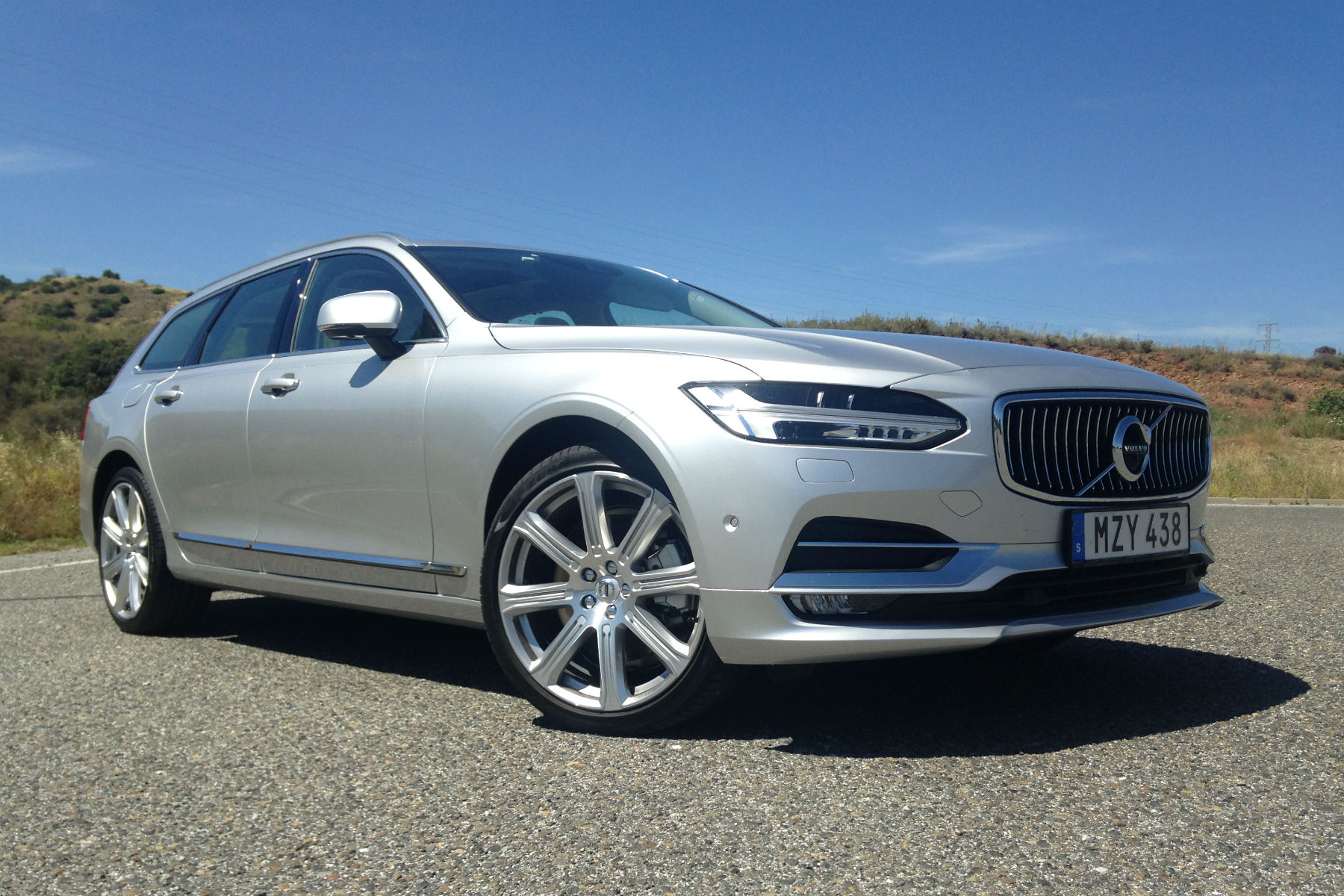 The year is 1986 and I am seven years old. I’m in the back of our Volvo 240 GL estate as ‘Hip to be Square’, the new hit from Huey Lewis and the News, blasts over the two-speaker radio/cassette. We’re heading to a National Trust garden, the sort of place that, as an adult, I would probably enjoy – but at the time I thought deeply uncool. In my eyes, the Volvo is deeply uncool, too. It’s square, but it certainly ain’t hip.

Fast-forward 30 years and I’m in Spain to drive Volvo’s latest estate, the V90. It’s a sleek machine, with a steeply-raked tailgate that prioritises style over luggage space. It has advanced self-driving technology and a luxurious, minimalist interior. And it’s available as a 407hp ‘Twin Engine’ plug-in hybrid. I think the seven-year-old me might consider it cool.

It’s undeniably upmarket, too. After years in the wilderness between mainstream and premium, Volvo is aiming its flagship estate squarely at the Audi A6, BMW 5 Series, Jaguar XF and Mercedes-Benz E-class. Prices at launch start from £34,555, with a choice of two four-cylinder diesel engines, plus front- or four-wheel drive. Cars arrive in the UK in October 2016, with the T8 hybrid following a few months later.

A lack of six appeal?

The V90 and S90 saloon use the same SPA (Scalable Product Architecture) platform as the highly-acclaimed XC90 SUV. That means a mixture of aluminium and steel construction, plus double-wishbone front suspension with a composite leaf spring at the rear. Air suspension is a £950 option, fitted to our test car.

The front-drive 190hp D4 reaches 62mph in 8.5sec and returns 62.8mpg with the standard eight-speed automatic gearbox. CO2 emissions of 119g/km equate to free car tax in the first year, then £30 a year thereafter.

You’ll notice the glaring absence of a six-cylinder diesel engine to match rivals. Can Volvo’s turbocharged fours justify a premium price-tag? Time to drive the V90 and find out…

Volvo expects the entry-level D4 engine to account for 70% of sales. Predictably, though, only the gruntier D5 (20% of sales, with the T8 taking the remaining 10%) was available to drive at launch.

Thanks to a compressed-air injection system Volvo calls Powerpulse, turbo lag is virtually non-existent and the D5 provides brisk acceleration and punchy overtaking ability. The engine is all-but inaudible at cruising speeds, but work it hard and there’s no doubt this is a four-cylinder diesel. It lacks the creamy smoothness of, say, a BMW six.

The V90 isn’t billed as a sports estate and, frankly, it isn’t. There’s a fair amount of body-roll when cornering and the auto ’box gets flustered if rushed. Switching to Dynamic mode sharpens up the chassis, but gives the steering an oddly inconsistent feel.

So it’s no BMW to drive, but that’s missing the point. Comfort is the V90’s raison d’etre – and where it excels. Volvo seats really are the best in the business, with supple leather, plenty of padding and standard Swedish-spec heaters. They’re like your favourite armchair with a bit more lateral support.

The news is nearly as good for rear-seat passengers. Unlike my parents’ 240, which had two pop-up, rear-facing child seats in the boot, the V90 only has space for five. If you need seven seats, you’ll need to trade-up to the XC90. However, three adults can get comfortable in the back, as long as the middle passenger doesn’t object to having his/her legs splayed either side of the wide transmission tunnel.

Ride comfort isn’t quite so impressive, although our test car was fitted with optional 20-inch alloy wheels (£1,700). Doubtless the standard 18-inchers would be more forgiving.

The boot could be bigger, though

Say what you like about the old 240 (and trust me, I did), its set-square design meant it had a huge boot. When I eventually went to university, we crammed my entire worldly goods in there.

The V90 is slipperier, more curvaceous, more aerodynamic and undoubtedly more stylish. But valuable boot space has been sacrificed for that sloping rear end, meaning it isn’t quite the wardrobe-swallowing wagon you might expect.

A premium car in 2016 needs to be stuffed with tech, and here the V90 doesn’t disappoint. It inherits a large portrait-oriented touchscreen from the XC90, which keeps the number of buttons on the centre console to a stylish minimum.

Anyone who has used a smartphone will have no problems swiping and scrolling their way around the Sensus operating system, which has clear graphics and intuitive sub-menus. Sat nav is standard and an in-built app allows you to stream music from Spotify. Phone connectivity options include the excellent Apple CarPlay, which replicates your iPhone screen in the car. The rival Android Auto system is promised soon.

On balance, we still find Audi’s MMI media system easier to use – particularly on the move, where its separate rotary controller helps you stay focused on the road. Volvo is genuinely up there with Audi for interior quality, though. From open-pore wood on the doors and dashboard to the knurled metal trim on the starter switch, the V90 is decisively more Habitat than Ikea..

It can drive itself… sort of

Volvo has a proud history of safety firsts, from three-point seatbelts in 1959 to side airbags in 1994. The V90 hadn’t been crash-tested by Euro NCAP at the time of writing, but we’d be very surprised if it doesn’t match the five-star score of its platform-share sibling, the XC90.

Among the arsenal of active safety systems is Pilot Assist, which allows semi-autonomous driving on motorways at up to 80mph. In practice, that means the car will regulate its speed, accelerating and braking as necessary and nudging the steering to keep you within the white lines. It works well, provided the road doesn’t become too twisty. You need to keep one hand on the wheel, though – the dream of having a snooze while the car commutes for you is still a long way off.

A world-first for the new V90 and S90 is large animal detection for the City Safety automatic braking system. We didn’t get opportunity to test it on the Costa del Sol, but if you met a moose in Sweden, we’ve no doubt it would prove very useful…

This is Volvo doing what it has traditionally done best: large, comfortable estate cars well suited to family life. Taking the kids and dog to a National Trust garden? Easy. Driving across France with a boot full of camping gear and a pair of mountain bikes on the roof? Pas de probleme. It makes you wonder why anyone would need a larger and less efficient SUV.

The V90 doesn’t raise the bar for luxury cars. The BMW 5 Series and Jaguar XF are both more rewarding to drive, and the Mercedes-Benz E-class is still a more accomplished all-rounder. But the Volvo feels sufficiently different to stand out from its established rivals, appealing on an emotional level as well as a practical one. It’s a properly premium car and maybe – just maybe – a cool one, too.

Stylish – both inside and out

Diesels are a little uncouth