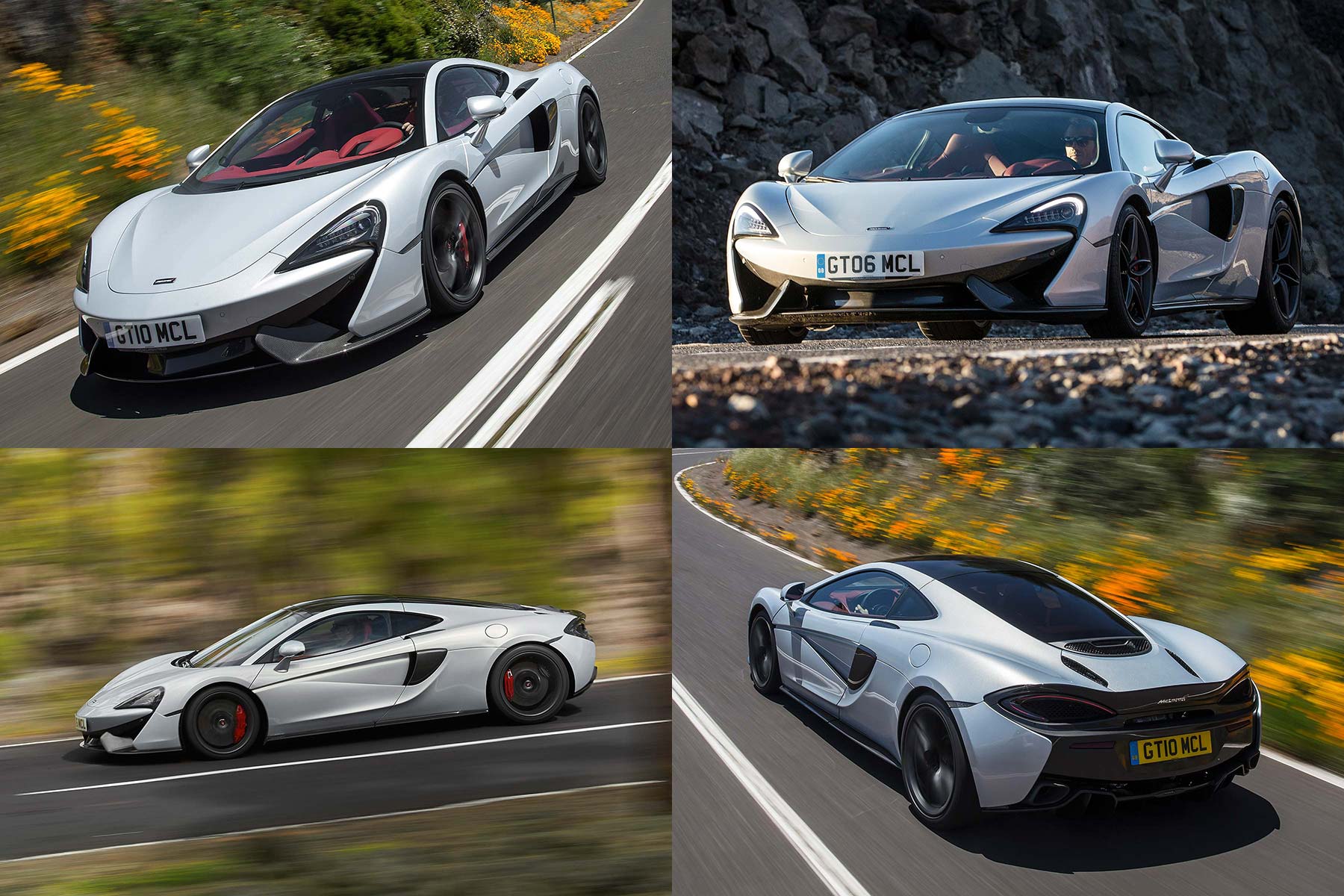 The McLaren 570GT is the model everyday Porsche 911 buyers have been waiting for. The sublime 570S, McLaren’s first Sports Series model, is a fantastic machine, but it’s a little too focused for the people who buy most 911s. More GT3 than Carrera 4S. Cue the 570GT.

What the 570GT does do is broaden the Sports Series appeal a little for those who, like so many 911 drivers, will use their cars more regularly than once or twice a week. Of all the McLarens on sale, the 570GT is most likely to be the daily driver, is the one that will cover the highest annual mileage. This is the McLaren you’ll be seeing in the Waitrose car park. 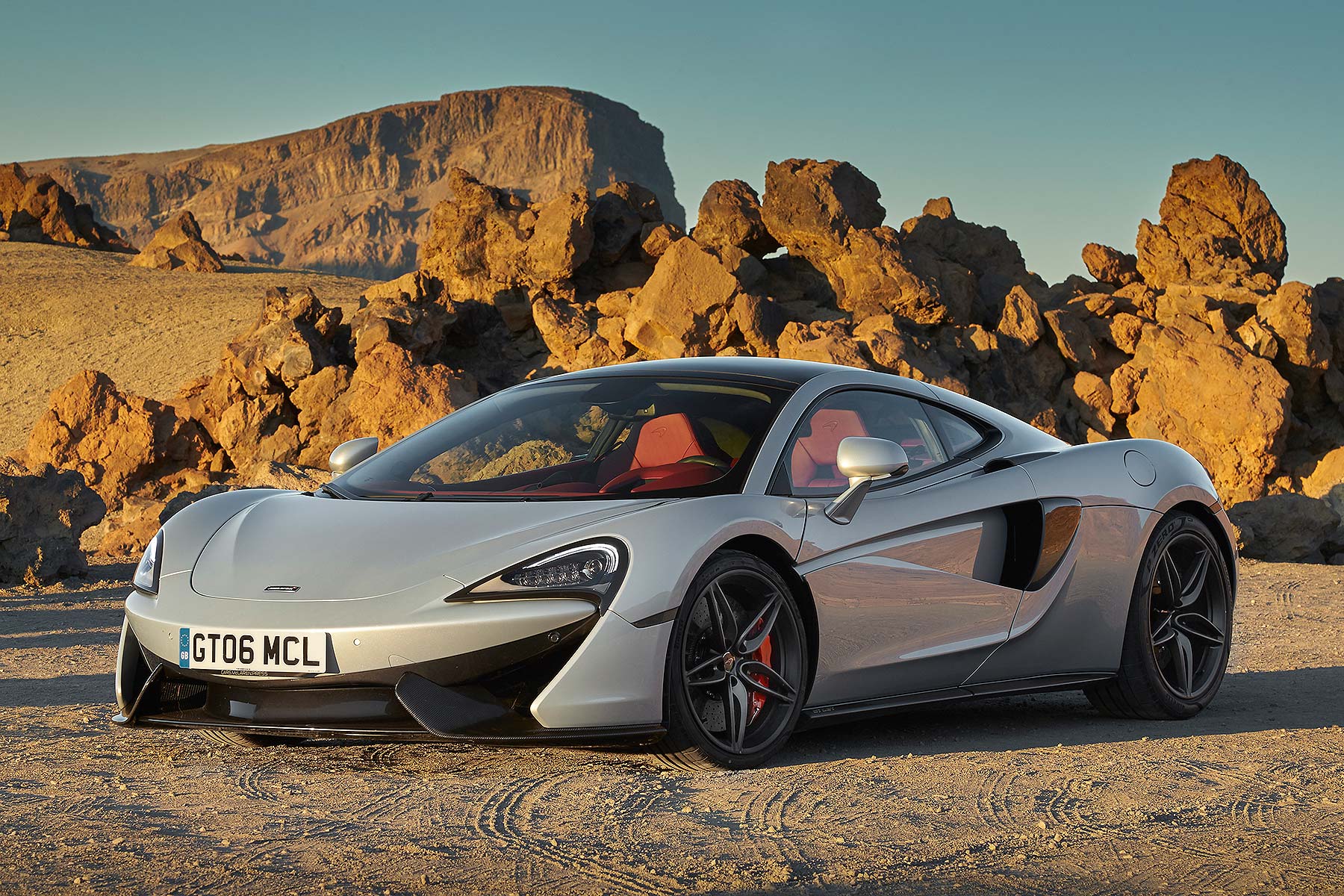 So this is the McLaren that’s easier to live with than any other. OK, it can’t match the 911’s USP of being a four-seater, but that’s because the engine’s in the middle rather than far out back. What McLaren has done is give it an additional boot, and a ‘hatchback’ to load it up through.

It also has an elegant new fastback rear to integrate this side-hinged door. With a standard panoramic roof, it has a glassier, sleeker look than the more focused 570S, although they’re clearly otherwise one and the same. Similarly inside: interiors are identical, just trimmed in comfier materials and more elegant combinations for the 570GT.

McLaren initially thought the 570S would be the best-selling Sports Series but, since revealing the 570GT at the 2016 Geneva Motor Show, believes it could actually be this. Certainly it’s the McLaren most likely to draw wavering 911 owners bored with a Turbo’s normality, plus a few ‘everyday’ R8 and Aston Martin DB9 owners for good measure. So what’s it like?

The McLaren 570GT is an elegant looker… 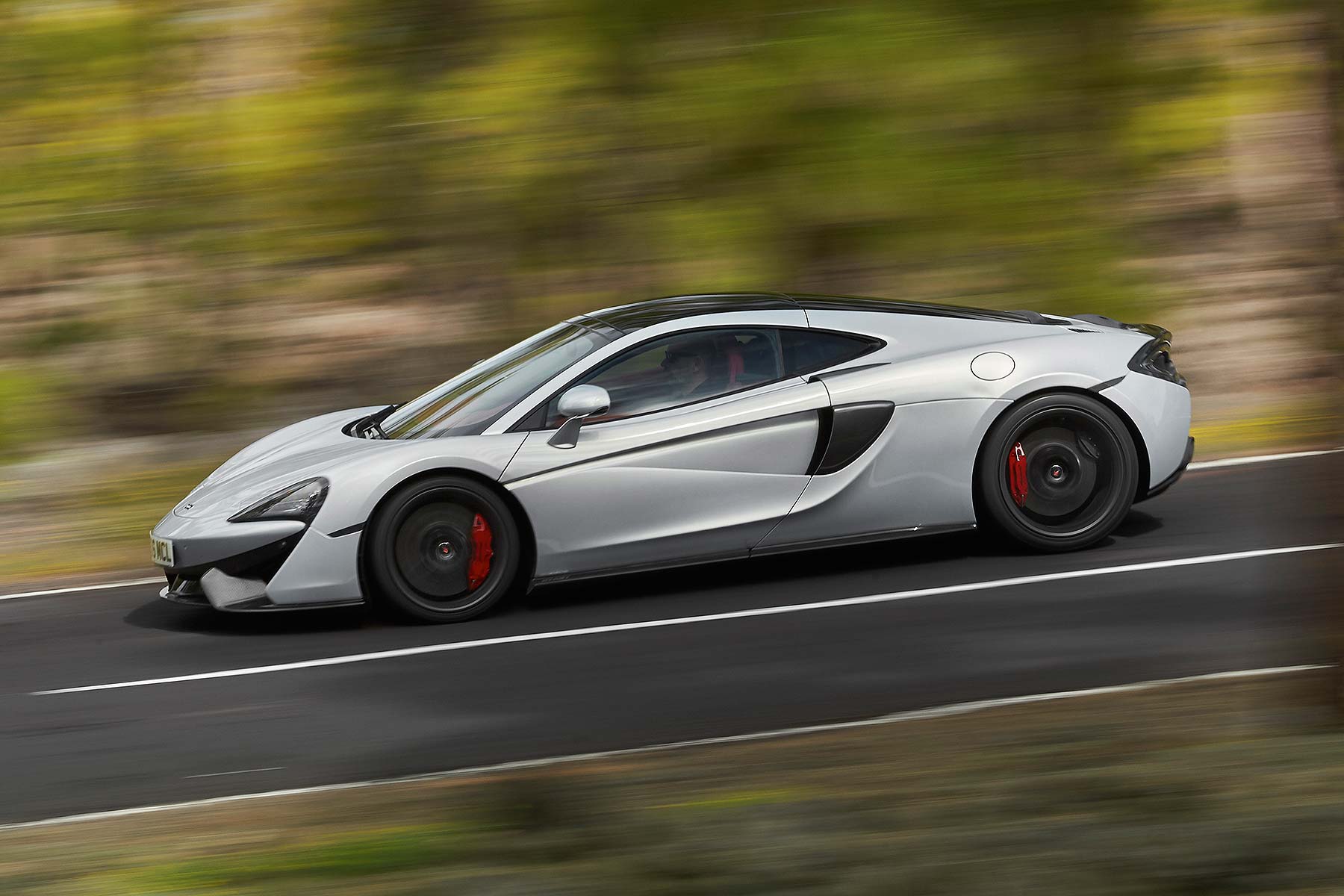 The main visual changes are that smoother rear, fancier alloys and more grown up colours. It loses the 570S’ skeletal flying rear buttresses and the extra volume in the rear gives it, well, more of a GT look. This makes it a sleek-looking thing on the road, particularly in the subdued silvers and greys many everyday drivers will choose. See – McLaren doesn’t have to be all extrovert lime green paint and track-spec exposed aerodynamics.

… But it’s still a racy McLaren 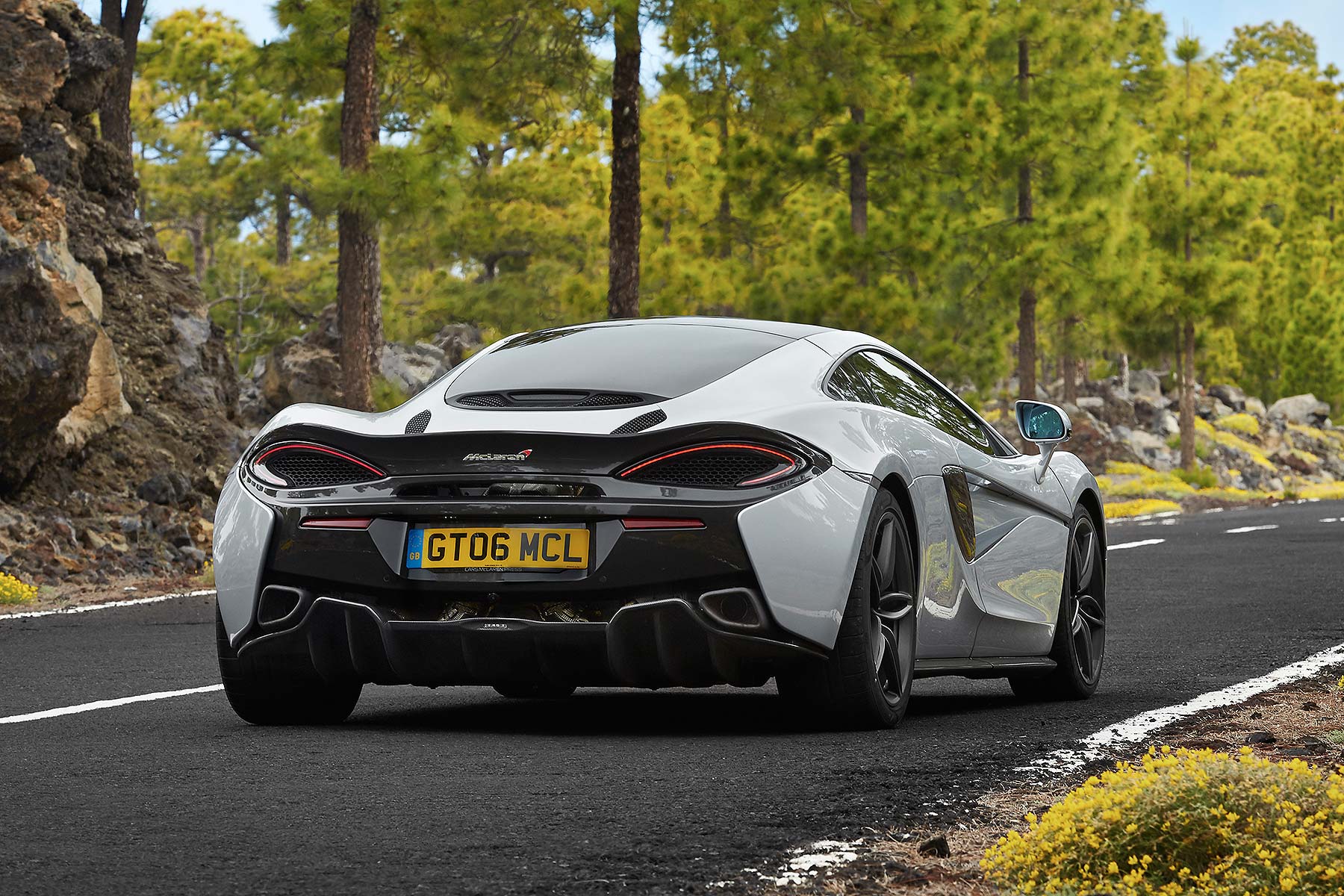 That’s not to say it’s gone soft. This is still a McLaren honed in the same aerodynamic wind tunnel used by the F1 racers, after all. So it’s still packed with diffusers and carbon fibre addenda, still has standout purpose and muscularity that will turn even the stiffest of necks. Compared to the ‘humdrum’ 911 and R8, it’s still a radical, attitude-lavished car to look at.

It’s still not the easiest car to get into… 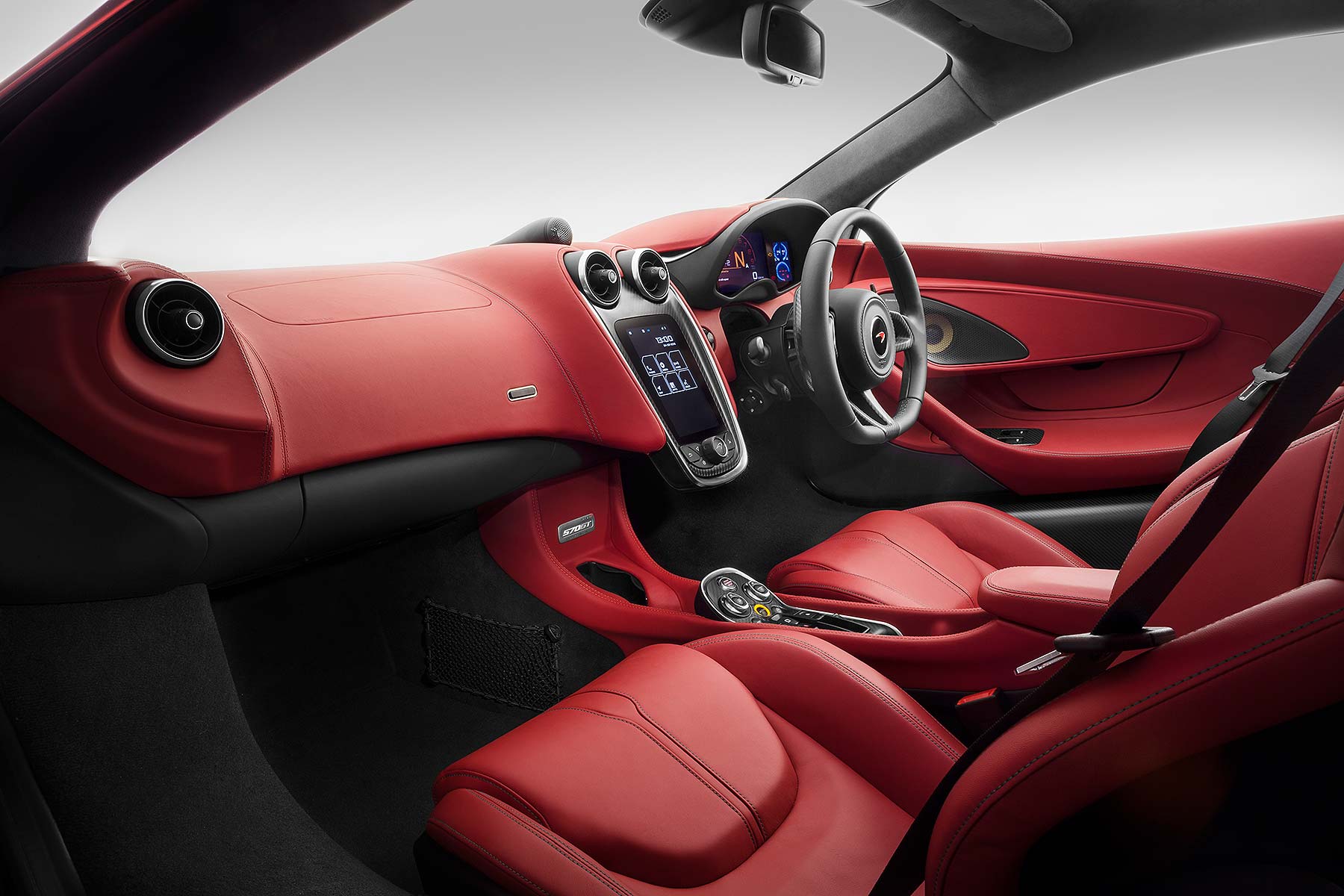 For supercar step-in-and-out-ability, nothing beats a 911. The McLaren, 570GT, with its dihedral ‘scissor’ doors, chunky sills, low seats and MonoCell tub you have purposefully to ease yourself into, is a car tricker to hop into and out of. It hasn’t gone everyday in this respect. Nor would today’s McLaren buyers, who like this sense of climbing down into a racing car, want it to (but maybe it’s something McLaren may want to consider in the future). 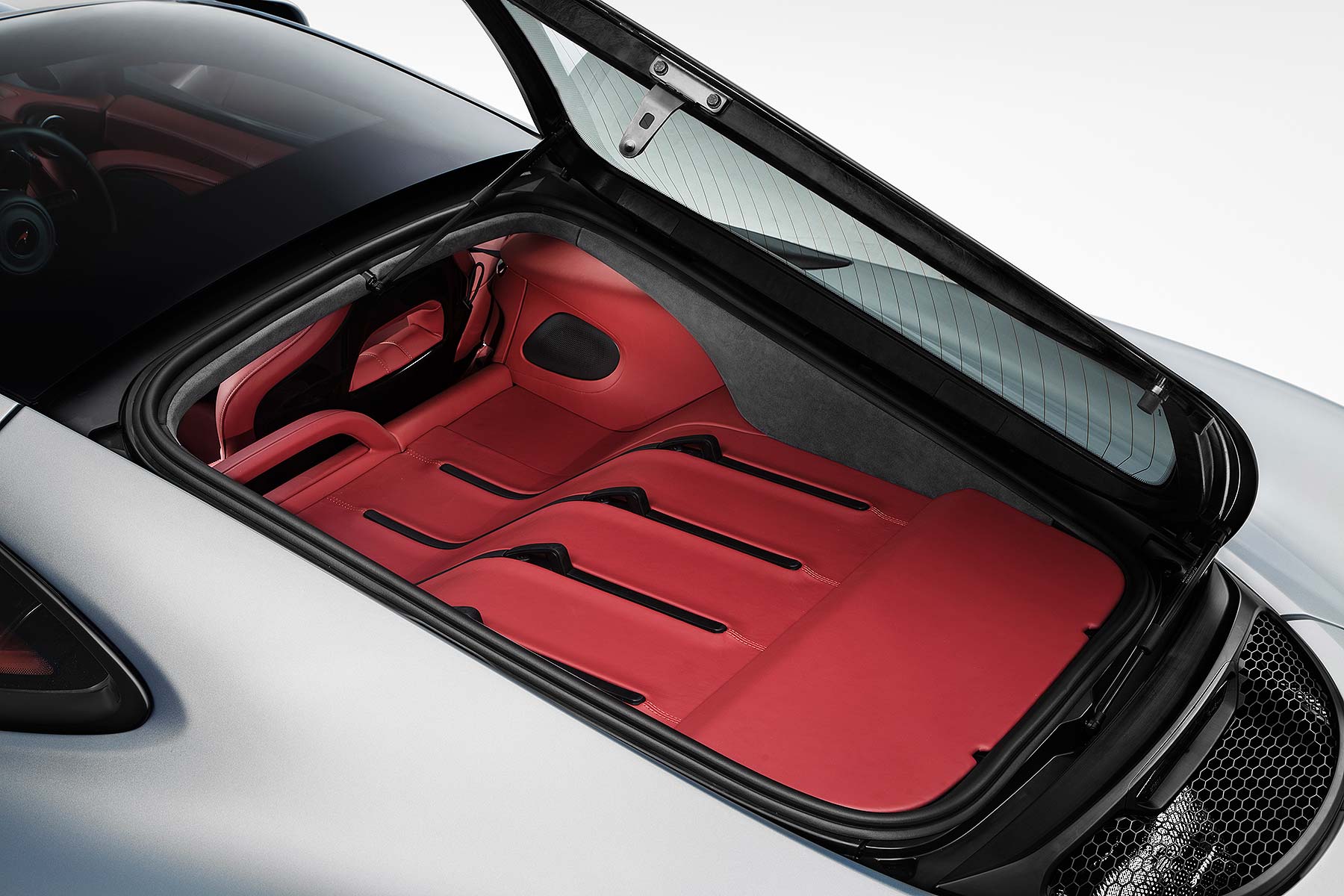 The 570GT has not one but two boots! One deep one in the front, like a 911, plus the extra load deck (McLaren calls it a Touring Deck) behind the front seats. Leather-lined, with anti-slip ribbing and an anti-fling-luggage-forwards bar, the side door opens kerbside for both left-hand and right-hand drive markets, and McLaren even fits folding seats so you can flip the seatback forward and chuck stuff into the 220-litre space without opening the rear door. Luggage space is up to 370 litres (just 10 litres shy of a Volkswagen Golf): GT-ability swells accordingly.

It’s ridiculously refined (for a supercar)… 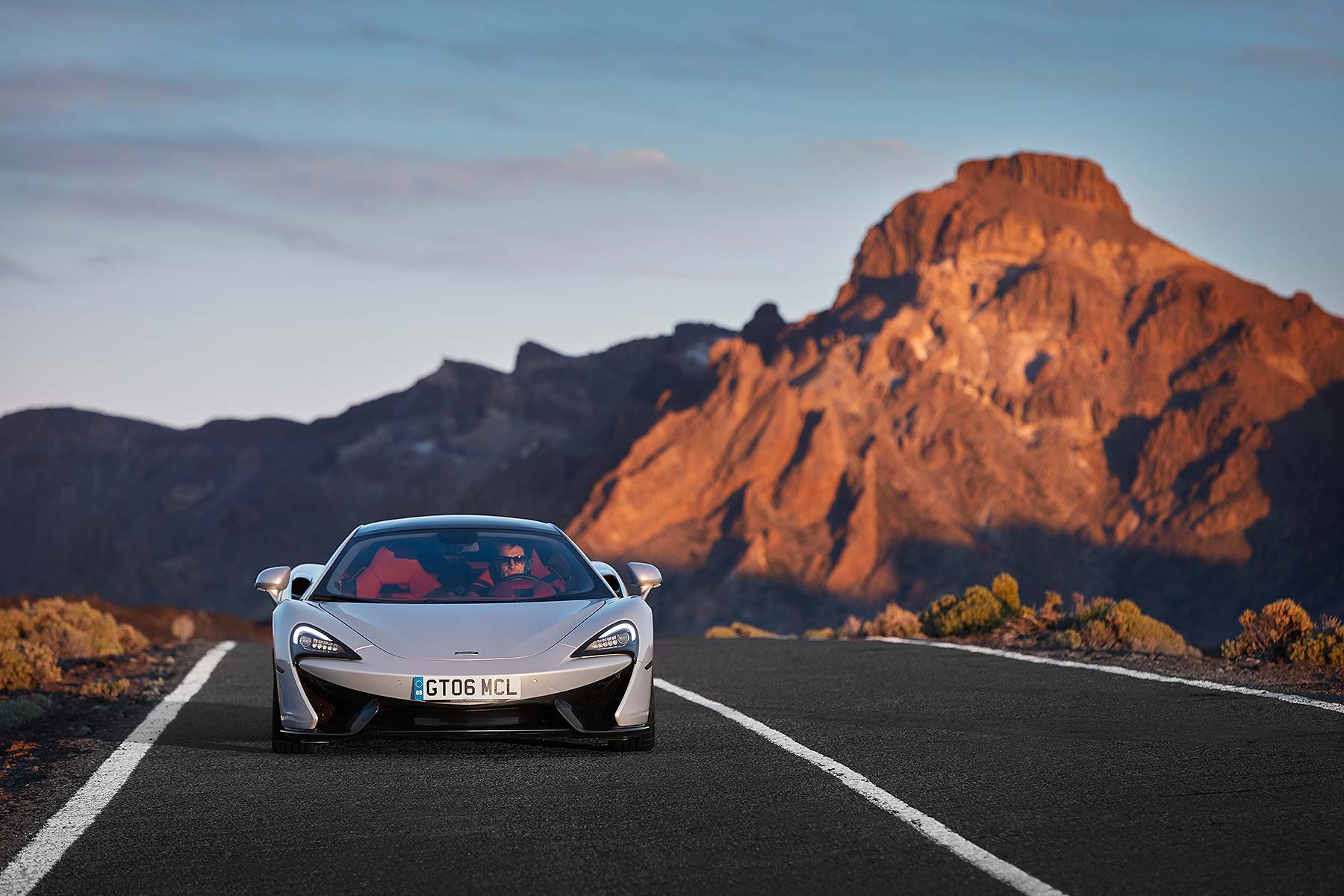 On the road, the first thing that strikes you is how quiet and plush-running the 570GT is, for a supercar. It’s not silent, and the twin-turbo V8 is rightly ever-present (the 570GT exhaust is apparently quieter, but you’d barely guess), but cruising noise from wind rush and, in particular, tyres is extremely low. There’s one key reason for this: McLaren’s using Pirelli’s new noise cancelling tyres, that dampen out tyre noise at source. They really work, making the 570GT a very relaxing, appealing motorway supercar cruiser. 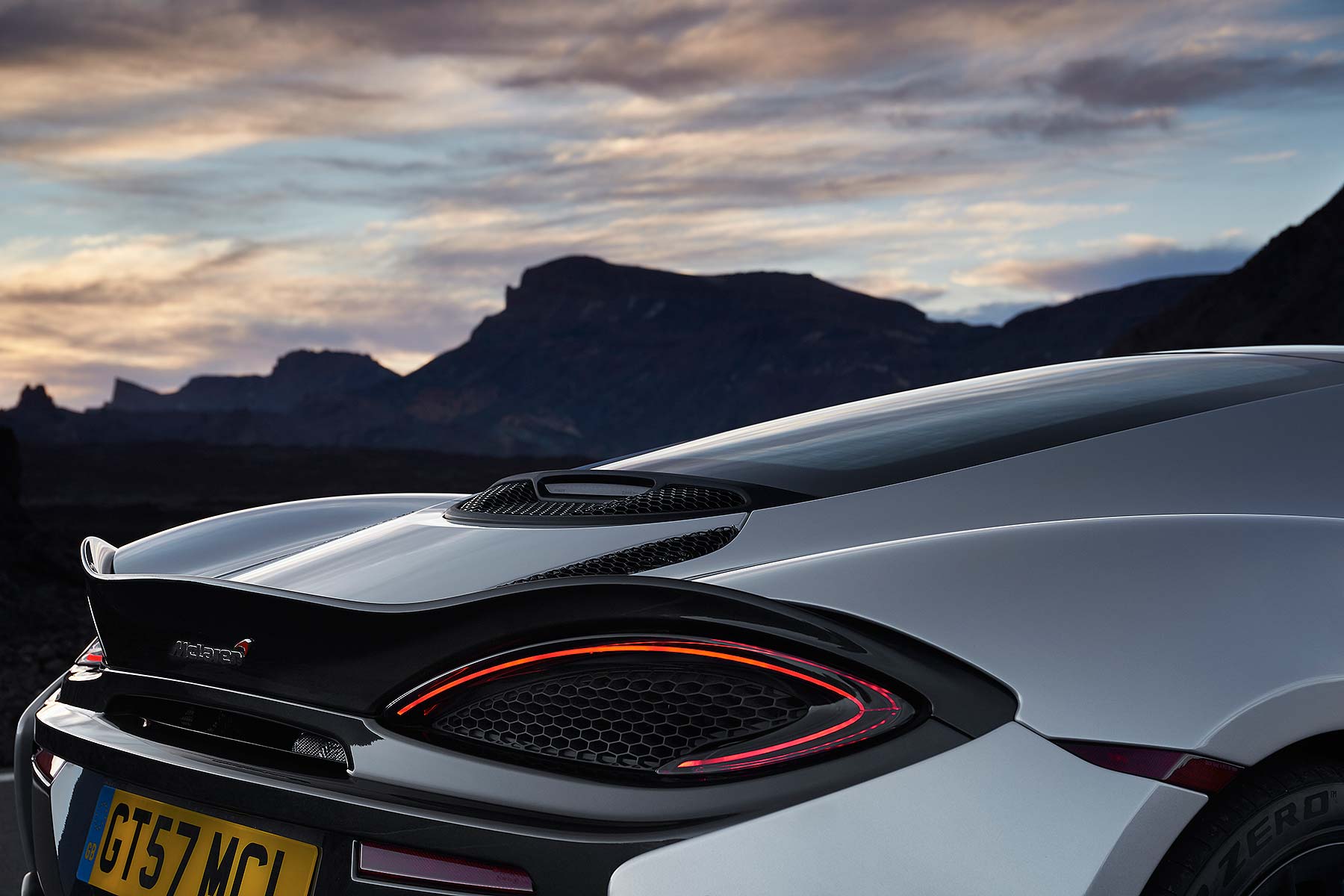 This may be the (rich) people’s everyday McLaren, but it’s also still stonkingly fast. The 3.8-litre twin-turbo V8 is identical to the 570S, so its only a bit of extra weight that dulls acceleration. A bit: 0-62mph takes 3.4 seconds, it does a quarter-mile in 11.1 seconds and will hit 204mph. Get it above 3,500rpm and it’s mind-blowingly rapid for a GT car, with the howling, wailing exhaust note to match. Way more thrilling than any anodyne-feel 911 Turbo S, that’s for sure.

It’s softer, but only relatively

McLaren has softened the suspension, a bit, made the steering a fraction slower and fitted regular steel brakes as standard rather than the track-feel carbon ceramics of the 570S. Compared to the S, it is more compliant, a touch less intense, easier to live with everyday. Compared to most other cars, it remains a true supercar, all nose-darting intensity, amazing grip, never-ending grip and taut, positive, ‘I feel like Jenson Button’ riding attitude. 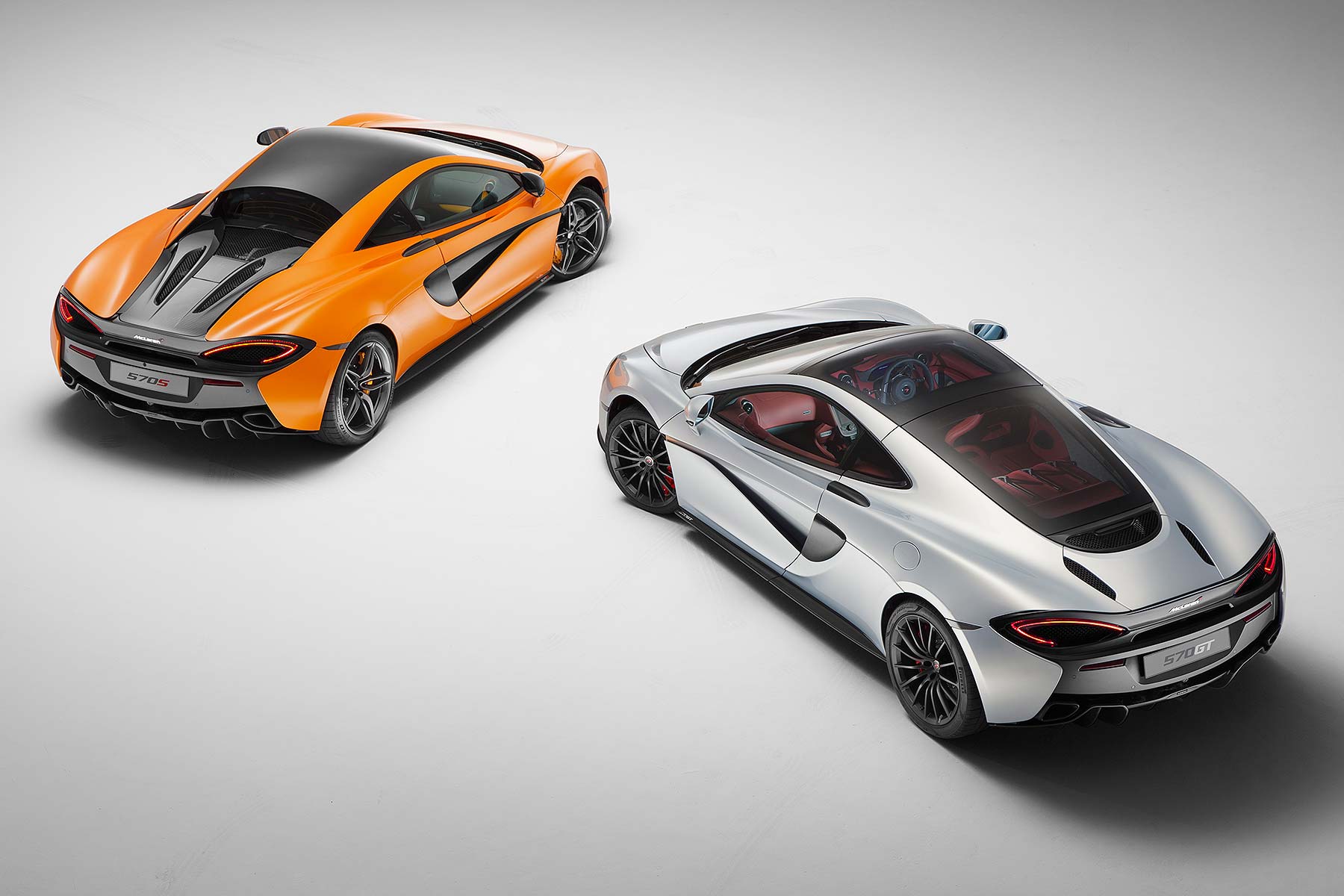 If you’ve driven the 570S, the 570GT won’t immediately grab you with quite the same intensity. It’s a fantastic car, but it’s strengths over the wild 570S are slower-burn. Only after an hour or so will you appreciate the better ride, more easy-converse noise levels, more relaxed steering and airier cabin. You don’t need to think about where to put all your stuff when you get in; the soft leather and sunshine-lavished cabin feels less like a road-going Le Mans car and more like a very special, more interesting alternative to a 911. Which will, if you drive your 911 to a McLaren dealer for a test drive, will make you feel a million dollars.

Its everyday strengths are considerable 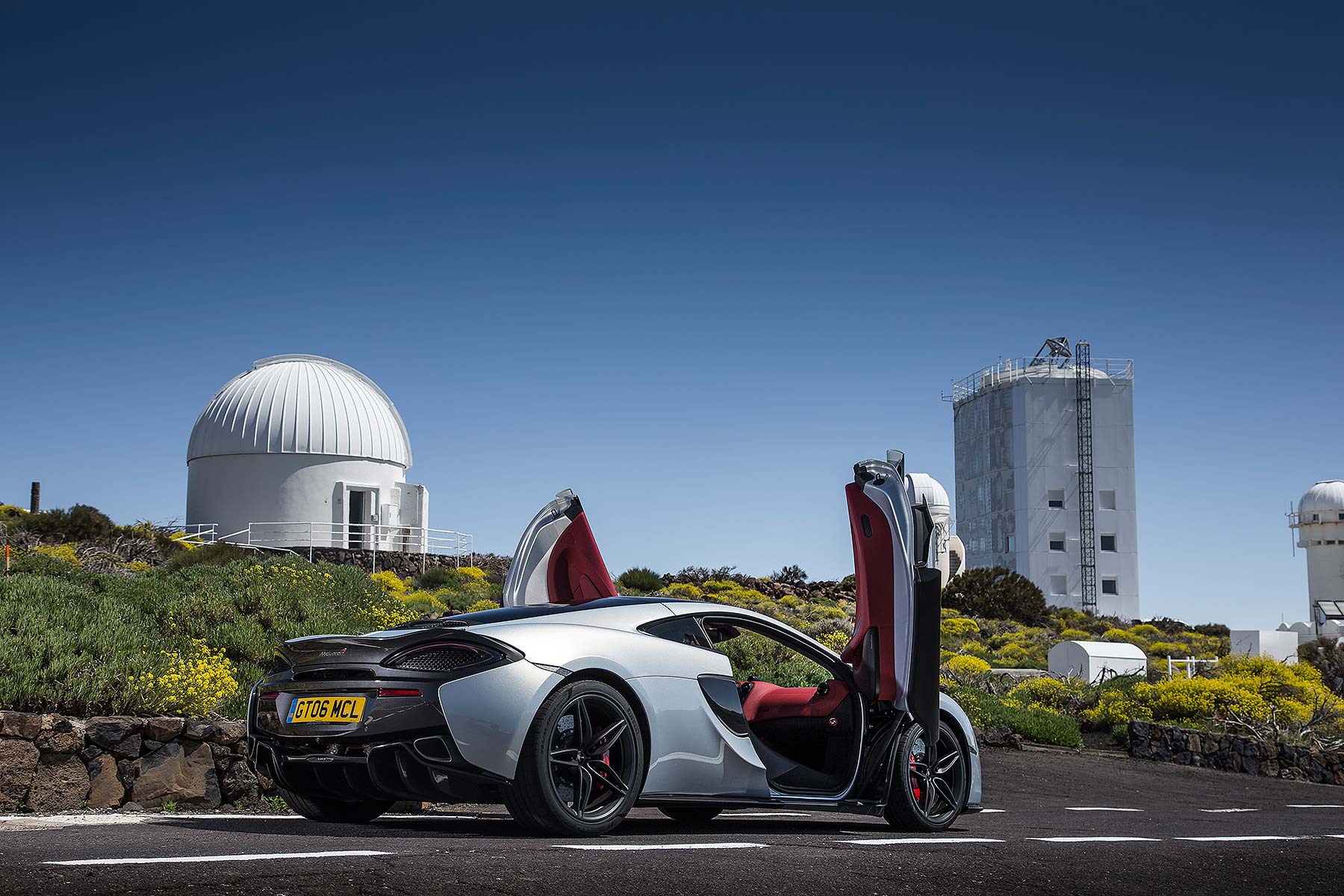 All McLarens have great forward visibility: the deep front screen, thin pillars and low nose sees to that. Great for hitting an apex, surprisingly perfect for threading through Central London. The 570GT enhances this with its standard panoramic glass roof and standard front and rear parking sensors. McLaren also includes standard soft-close doors, electric heated seats and an electric steering column that slides out the way for easy entry and exit. It hasn’t turned into an S-Class, far from it. But for those who like to use their supercars hard, this is the best McLaren for the job. 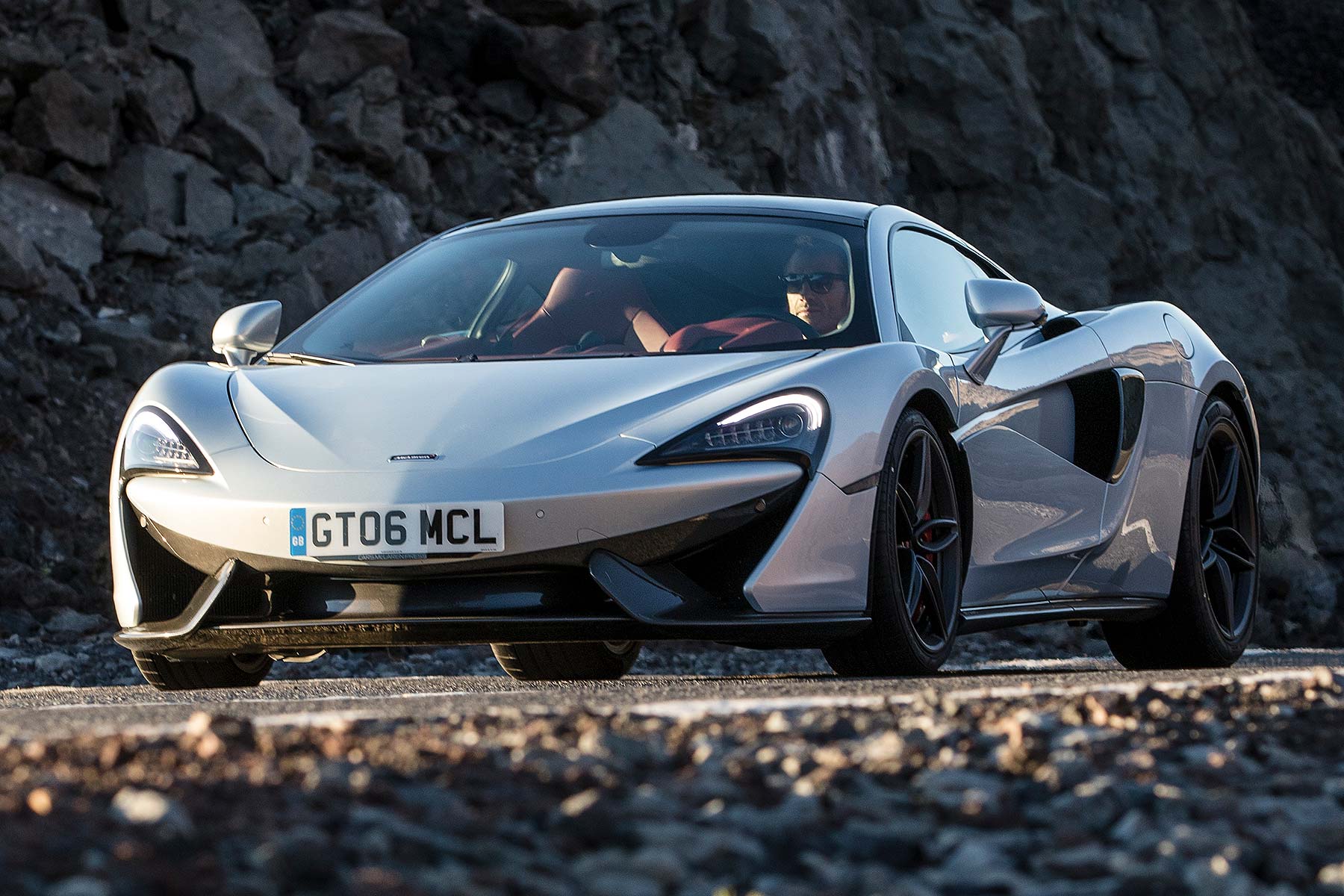 The McLaren 570GT is the best definition of McLaren’s Sport Series models. It’s very McLaren, so is all fantastic design, exotic engineering, ultra-precision drive and mind-warping speed. But this is McLaren blended more to the (relative) everyday: you could use it to commute in if you wanted to, and the refined extra comfort that makes it such a good GT car will also make it good for the M25 grind and inner-city jams McLaren’s entrepreneurial customers may choose to use it in.

For instant-hit satisfaction, the purity of the 570S still gets our vote. If you have a fleet of cars, like many McLaren customers, you may prefer the sharper, more F1-like 570S for its pure McLaren brilliance. But anyone who’s looking for a McLaren as an alternative to a 911 or R8 – and given those cars’ sales, there may be a lot of them – should steer to the thrilling 570GT. No wonder McLaren’s betting it will sell better than any other car it has ever made.

The most practical McLaren yet…

… But little less exciting than the others

Thrilling yet tolerable to live with everyday

Still hardly as everyday as a 911

Jaguar has given its F-Type a new face and a big digital gauge cluster screen, but taken away the supercharged V6 for 2020
Read more

Toyota to recall a million hybrid cars due to fire risk

14 million drivers say they would brake-test a tailgater

A third of drivers respond to tailgating by dabbing the brakes. This, along with a flash of the foglights or sharp braking, can risk a collision
Read more

New research reveals that 32 percent of motorists would opt to flee a parking mishap, rather than own up to damaging another car.
Read more