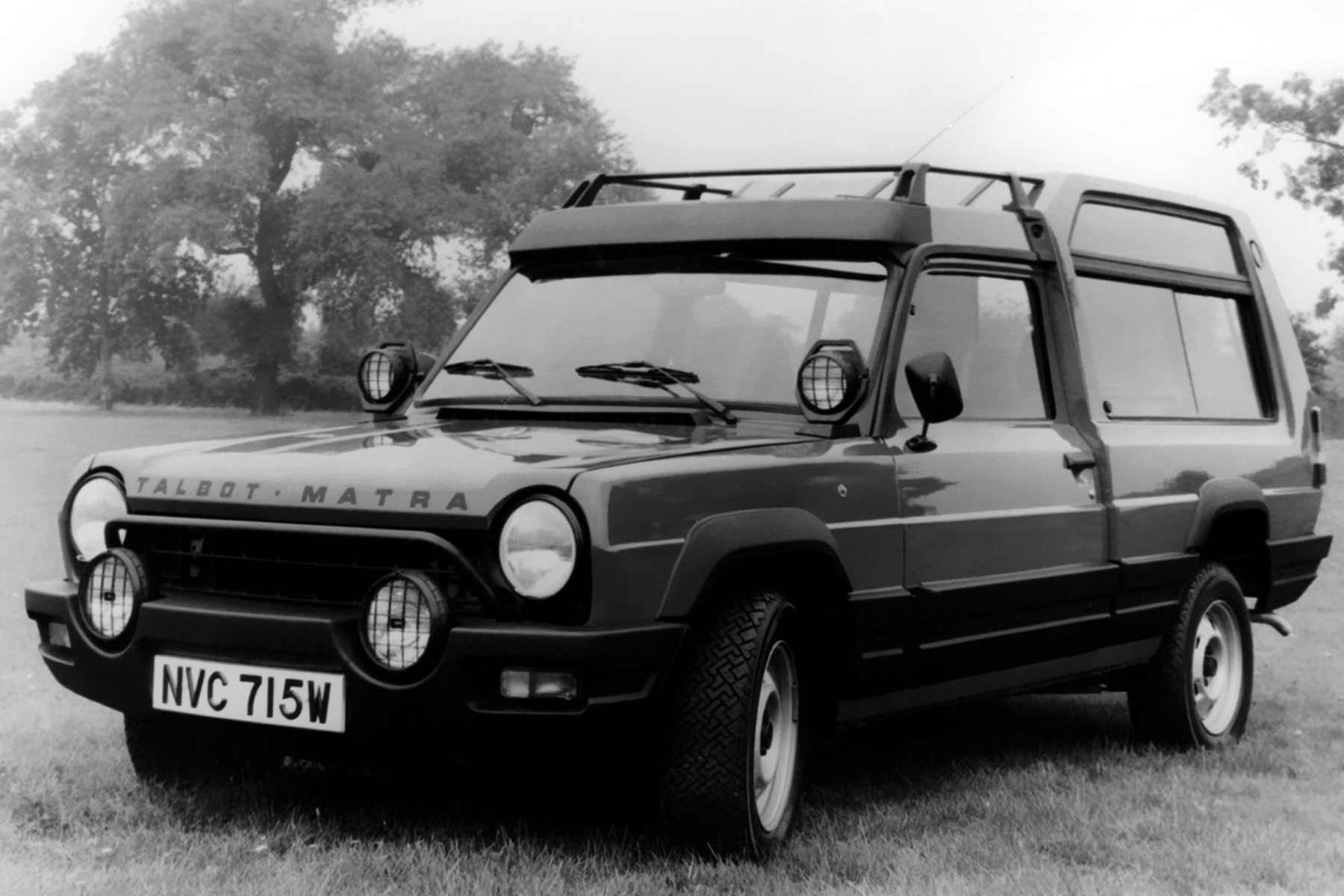 If you grew up in the 1980s, the chances are you played with a Matra-Simca Rancho – later the Talbot-Matra Rancho – without ever really knowing what it was.

It certainly looked like an off-roader, with its split tailgate, plastic roof rack, wheelarch extensions and large spotlights. In reality, your Matchbox Superkings had as much, if not greater, off-road prowess than the real thing.

Does this make the Rancho a bit of a fraud – all show and no go? Well, partly, yes. But that’s not to say that the Rancho is without appeal. It might have lacked the skills to tackle the rough stuff, but this was a genuine pioneer. Where it led, others followed.

The more I read and write about the Rancho, the more I believe that, one day, I will have to own one. pic.twitter.com/cMuDujxJ2l

Mecanique-Aviation-Traction grew out of CAPRA, a small French aeronautical firm that became Matra in 1942. It began manufacturing Renault-powered sports cars in 1965, before building its first road car in 1967.

It was the Ford V4-powered Matra 530, which paved the way for the Bagheera of 1974. By now, Matra was developing a reputation for flair and innovation, but its next creation was the most groundbreaking and influential design to date.

With its aeronautical background, it’s hardly surprising that Matra had such broad horizons. With the fuel crisis of 1973 fresh in its mind, it knew that it needed to look beyond sports cars to secure its future.

The Bagheera was a joint development between Matra and Chrysler-owned Simca, which had developed a strong dealer network and a successful range of cars. For Matra, this meant access to an extensive distribution network, as well as a bountiful supply of spare parts. 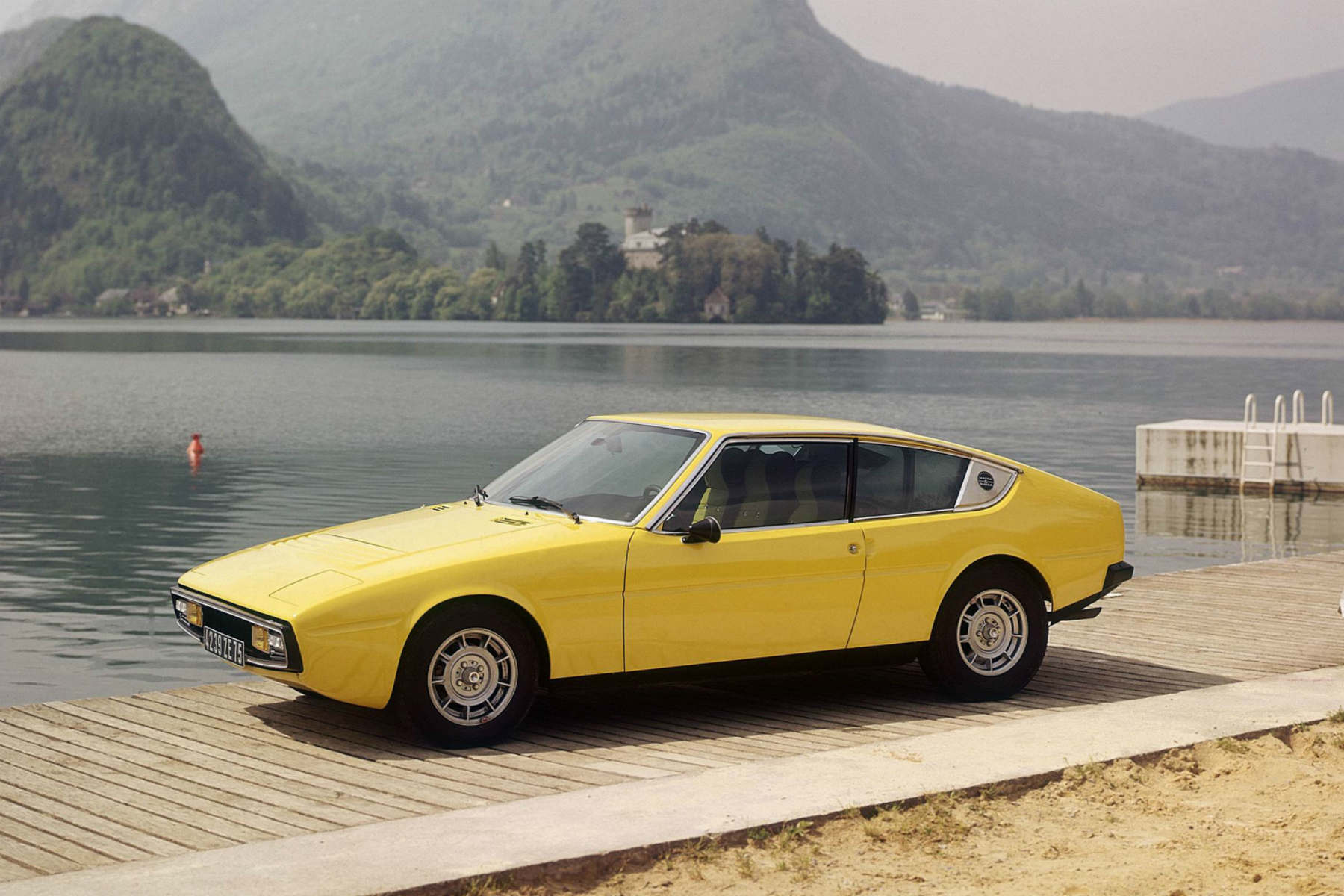 The Simca-Matra-Chrysler-Peugeot-Talbot story is long, complicated and too convoluted for this ode to the Rancho, but a little knowledge is enough to understand where the faux off-roader came from, how it developed, and what led to its demise.

Matra turned to Range Rover for inspiration and Simca for a leg-up. Spen King’s creation had enjoyed seven years of market dominance, offering an unrivalled ability to look good outside the King’s Arms, parked on the King’s Road, as well as working on the Queen’s estate.

It’s hard to believe now, but other SUVs of the era were mostly crude, utilitarian affairs, offering next to nothing in the way of creature comforts. A trip to the garage for the annual MOT test was about as far as you’d dare go in an off-roader.

A year before the Rancho arrived, CAR magazine, when testing the Toyota Land Cruiser, said: ‘The Toyota Land Cruiser is a nasty piece of work. Ugly, ill-fitted to its dual purpose, priced at £4,392 to (theoretically) take on the Range Rover, its overall performance is inferior to the lowly Land Rover Station Wagon’. Ouch. 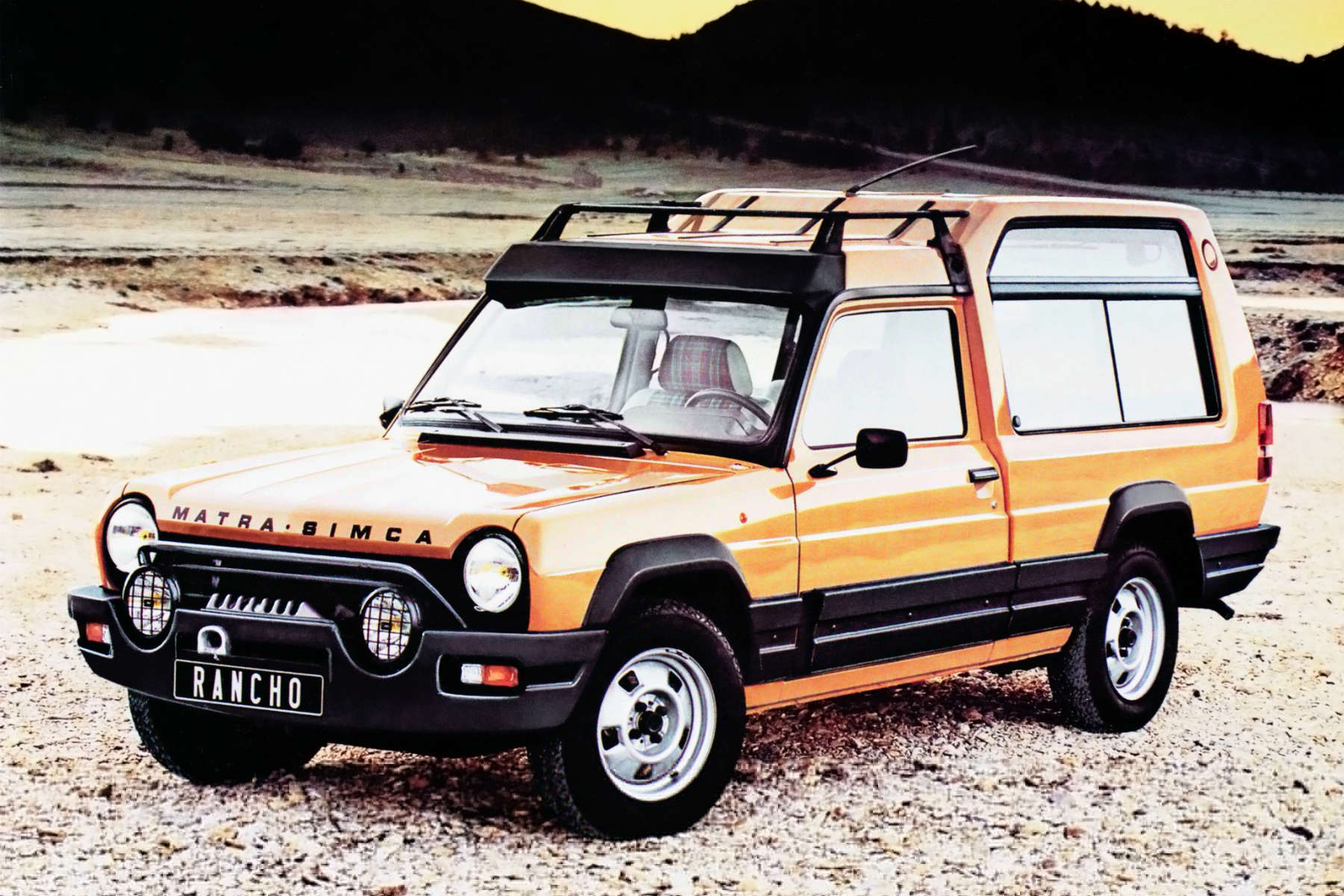 The stage was set. Matra felt that the world needed the prestige and practicality of the Range Rover, without the need for a cumbersome, inefficient and, in many cases, redundant four-wheel-drive system.

Chrysler had enjoyed some success with the Simca 1200 Campero, a Spanish-built vehicle based on the Simca 1100 and designed for unmade roads and forest tracks. Launched in 1973, the Campero’s styling, hardware and approach almost certainly led to the development of the Rancho.

It was based on the 1976 Simca 1100 van, with power sourced from a 1,442cc Simca 1308/Chrysler Alpine engine. Christened P12, there were more than a few subtle nods to the Range Rover, including the split tailgate, two doors, the separate letters on the bonnet and tailgate, and large side rear windows.

At the back, the Rancho featured a fibreglass-clad steel frame body, with the back seats positioned 10cm higher than the fronts for maximum visibility. The doors, front wings and windscreen were lifted from the 1100 pick-up, while the dashboard was taken from the 1100 hatchback.

It was by no means quick – top speed was 91mph – and it wasn’t particularly fuel-efficient. You can blame the lack of aerodynamics and the relatively high kerb weight for the Rancho’s failure to return decent economy. But, hey, doesn’t it look great?

The roof rack was Matra’s attempt to mask the step from the front half to the rear section, while the wheelarch extensions, side mouldings and big bumpers provided protection from swinging shopping bags on the streets of Paris and Chelsea. 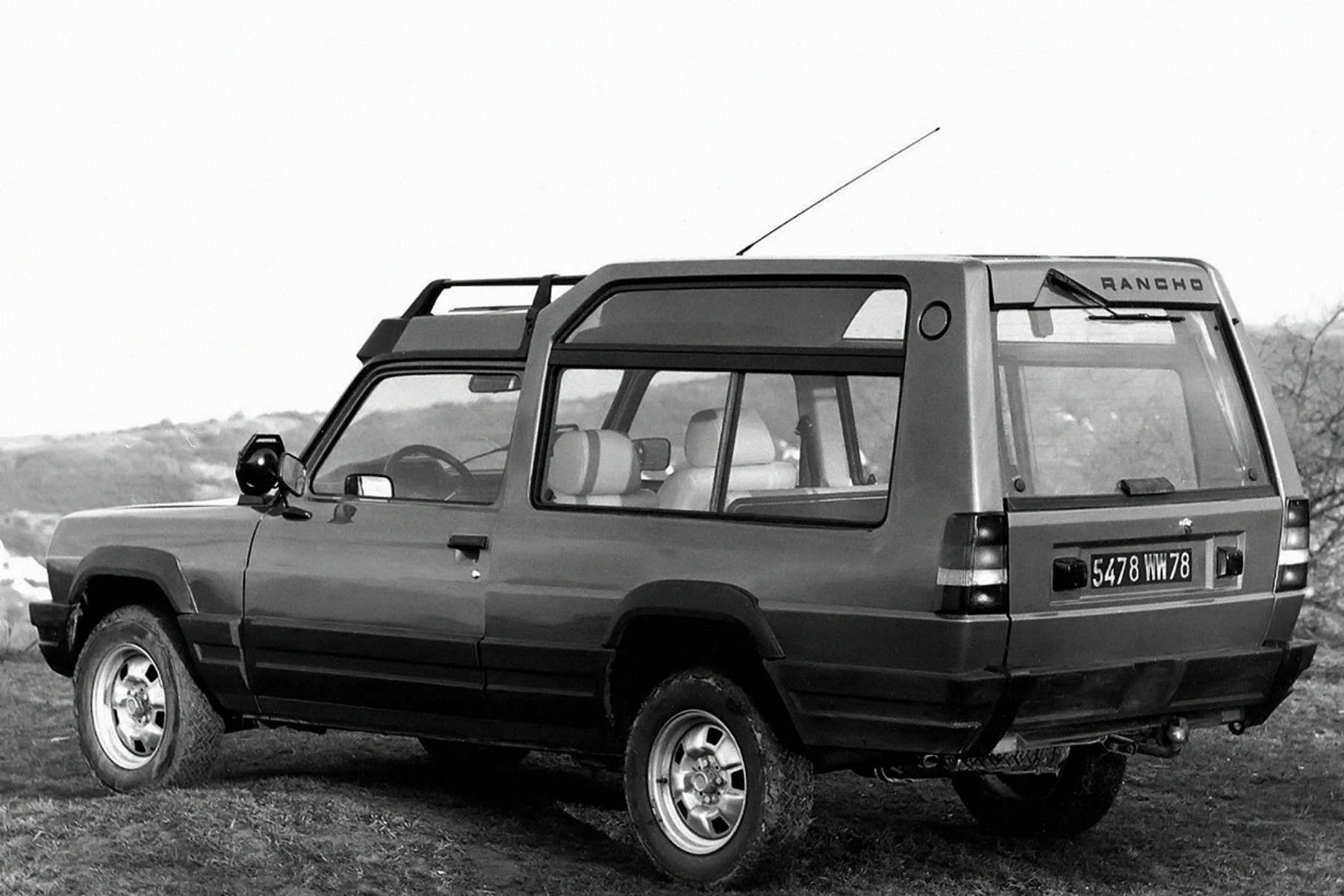 ‘Built for you to spread your wings,’ proclaimed the launch brochure, but while Matra was occasionally guilty of promoting off-road skills it just didn’t possess, it knew that fashion and image would sell the Rancho.

‘For people who don’t mind being noticed a little,’ said the press advert in 1979. ‘Matra Rancho, from Chrysler – a very noticeable car at a rather un-noticeable price: under 6 grand.’ The inclusion of Chrysler was significant – few buyers would have heard of Matra – as was the image used on the ad. The Rancho was parked outside Harrods, Knightsbridge.

Chrysler pulled out of Europe in 1978 and sold its holdings to Peugeot, with the Rancho gaining Talbot-Matra badging in 1979. It remained without any serious competition. Manufacturers were beginning to cotton on to the lifestyle benefits of a 4×4, but the Rancho stood alone in a field offering space, practicality and the option of seven seats. That’s assuming you could drive to the field…

‘Perfectly at home in both town and country. Rancho seats seven in comfort, and with the rear seats folded there really is an astonishing amount of carrying space,’ said the Talbot range ad in 1981. Alongside the Tagora, Alpine, Solara, Horizon and Sunbeam, the Rancho sticks out like an eccentric French exchange student in a room of sombre-suited sixth-formers.

Yet it remained popular, especially in its native France, where the automotive press was more accommodating than others. The Rancho story is one of overcoming adversity, forging ahead in a non-existence market, dealing with multiple management changes and a somewhat cynical press.

‘An exercise in form as much as function. It’s intended for well-heeled Europeans who want the rugged look and feel of an off-roader for practical or social reasons,’ wrote Car and Driver in 1980.

‘It is a con trick, nothing more than a sheep in wolf’s clothing,’ said Motor in 1978, before admitting that it looked better than a Range Rover – quite a surprise, coming from a UK title – and had a sharp image.

‘The Rancho has become a very fashionable car in which to be seen along the boulevards of Paris,’ said Chrysler of its ‘multi-purpose leisure vehicle’. And that’s the point of the Rancho – it was never intended to be a Range Rover rival. It was more of a lofty estate car with the driving characteristics of a family saloon or hatchback.

Sure, it cost the same as a well-equipped estate car, but it undercut the Range Rover by some £3,000. Little wonder, then, that Rancho sales were more than double the original forecast, with 56,700 finding loving homes.

Sadly, Britain wasn’t offered the special editions, such as the more rugged Grand Raid of 1980, the well-appointed Rancho X, the metallic black Midnight, or the very lifestyle Découvrable. There was also a French-only commercial vehicle.

Production ended in 1984, with Matra concentrating on its next pioneer: the Espace. The MPV began life as the P11, with Matra building the first three generations and the Avantime. When Renault took on the production of the Espace, Matra was effectively dead, although the name lives on in the form of a company building electric bikes.

Toyota and Nissan have both claimed to have invented the crossover, but the Rancho was out of the blocks before an enlightened marketer had coined the term. It would be another decade before the RAV4 arrived, the growth of the ‘crossover’ segment slowed by the advent of the MPV.

It could be argued, then, that Matra invented the segment, only to stop it in its tracks with the development of the Espace.

About the absence of four-wheel drive – so what? For most buyers, a drive along a forest track to go camping or turning into a beach-side car park is more than enough off-roading, thank you. And when you get to your destination, the Rancho not only looks the part, it has the practicality and space to out-muscle any full-fat 4×4 or estate car.

Whatever your thoughts on the Rancho, that quirky ‘off-roader’ you pushed along the living room carpet was as relevant and beautiful as the Countach and GTO you had pinned to your bedroom wall. Pass that Matchbox Superkings or Corgi model to your young offspring – the Rancho legacy needs to be kept alive.