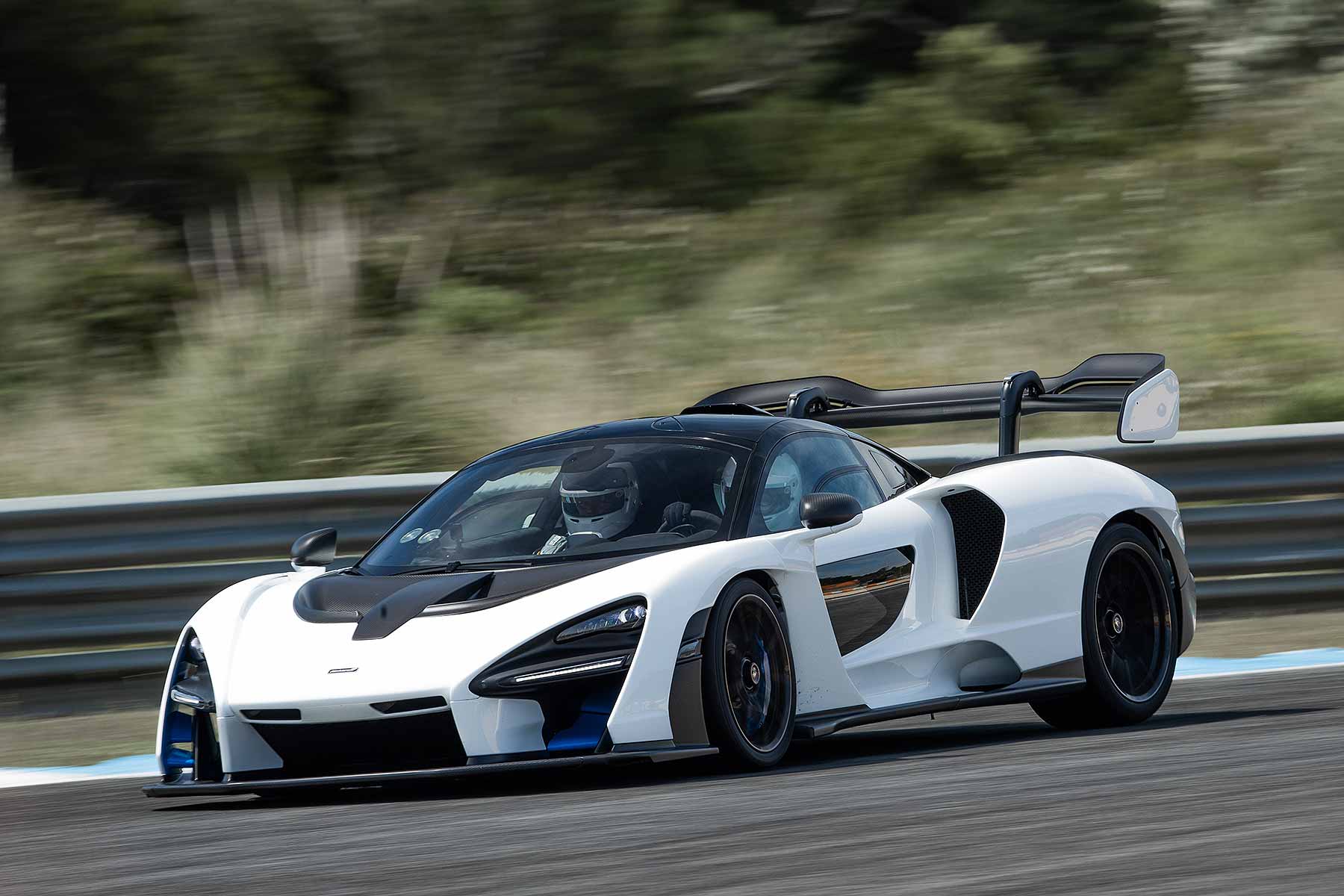 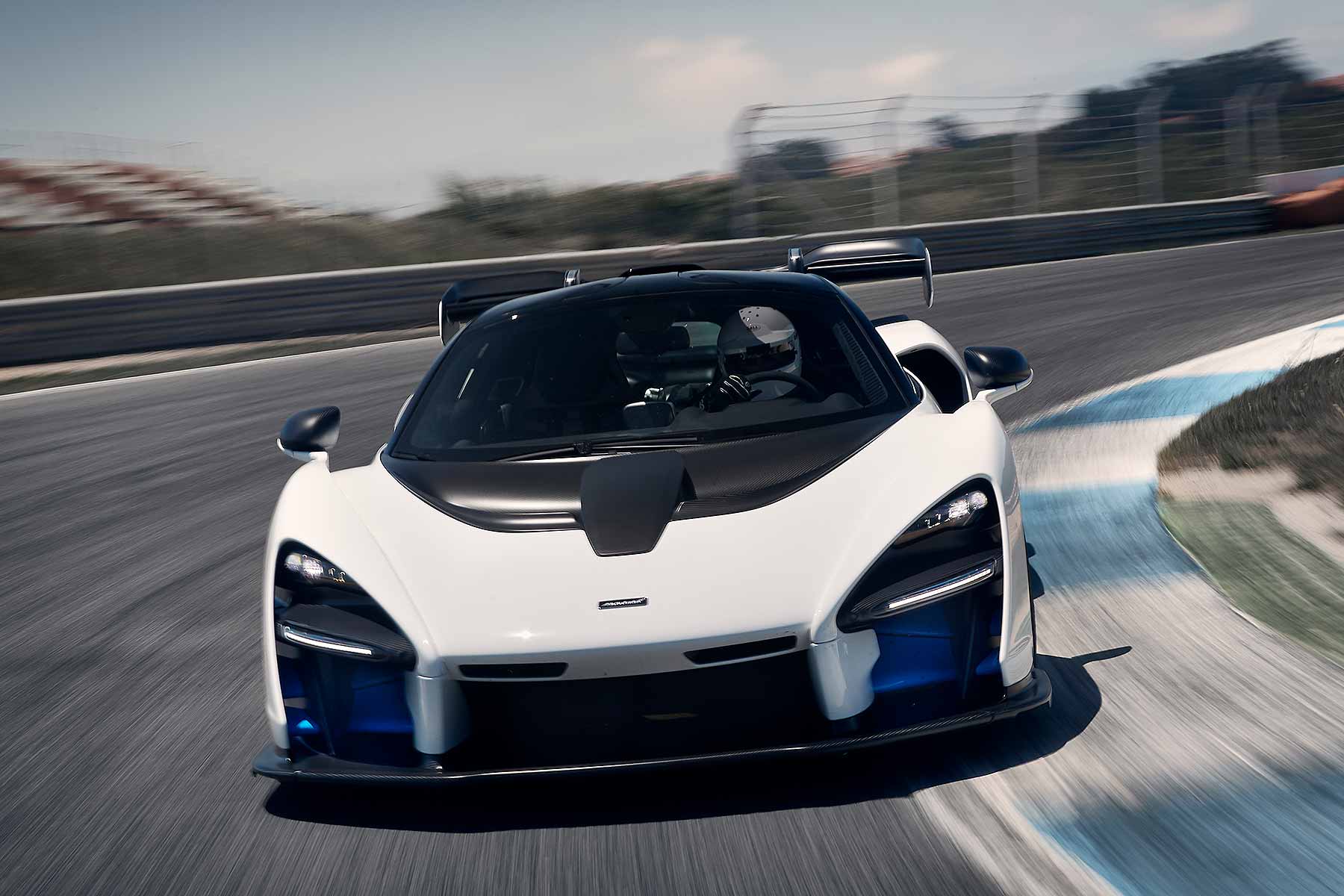 Hours after driving it, my hands were still shaking. I couldn’t sleep that night through thinking about it. I had wondered how McLaren could justify calling a car ‘Senna’. Now I knew. And I don’t think any car will feel quite the same again.

The Senna even made the McLaren 720S feel meek. A car we’ve previously called the new supercar benchmark. That the 720S was McLaren’s chosen hack to help us learn the Estoril circuit in Portugal says it all. We could have learnt the lines in Renault Clio diesels. Nah. Only by using a supercar do you stand the remotest chance of getting ready for a Senna.

Why Portugal? Because that’s where Ayrton won his first Grand Prix, back in 1985. This is the first road-going Senna, and we’re the first to drive it, so it all seems fitting. Besides, Estoril may seem a bit faded-glory, but it’s still blindingly fast and intimidating. You don’t nudge 190mph on any old racetrack. 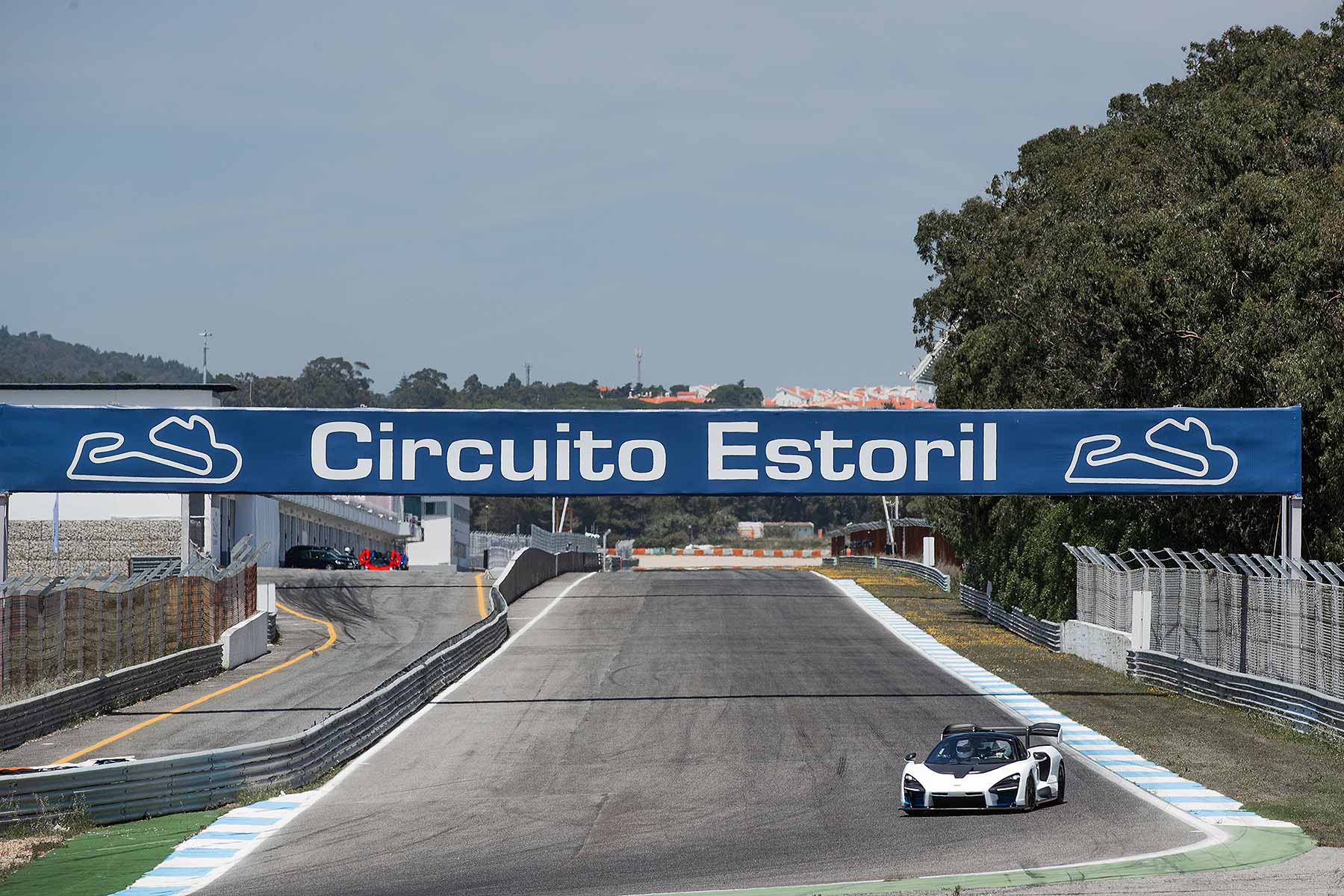 We’d spent the evening before talking all things Senna. McLaren’s latest Ultimate Series Car (the halo of its Sport Series and Super Series triumvirate), is a successor to the P1, of sorts. That car was about being fast and clever. This is about being fast and thrilling: the most intense, pure driver’s car ever built. A car that would justify being named after one of the best drivers ever.

They’re all sold out, so it doesn’t matter how many they’re building (500). Or how much they cost (from £750,000). We’ve even covered everything you need to know about the Senna in full, so McLaren saves the full technical briefing.

Instead, we talk watches (Senna owners get to spec a special Richard Mille timepiece) and the McLaren BP23 (the car we later learn will be christened the Speedtail).

And the Senna connection. McLaren invited Bianca and Bruno Senna (Ayrton’s niece and nephew) over to its studio, to show them the project, then codenamed P15. It was to be the ultimate track car, one with ‘the purest connection to the driver ever’. One showing ultimate commitment and focus on details, just like Ayrton. They loved it. The Senna was born.

I didn’t think of any of this as I stood there the next day, still sweaty from lapping in the 720S, as my charming, cheery instructor Jamie Wall sorted out the belts so I could duck beneath the dihedral doors and step into the beautiful padded carbon fibre shell seats (they weigh just 3.35kg; normal seats weigh more than a child). I wondered how on earth I was going to live up to it.

Driving the McLaren Senna: take one 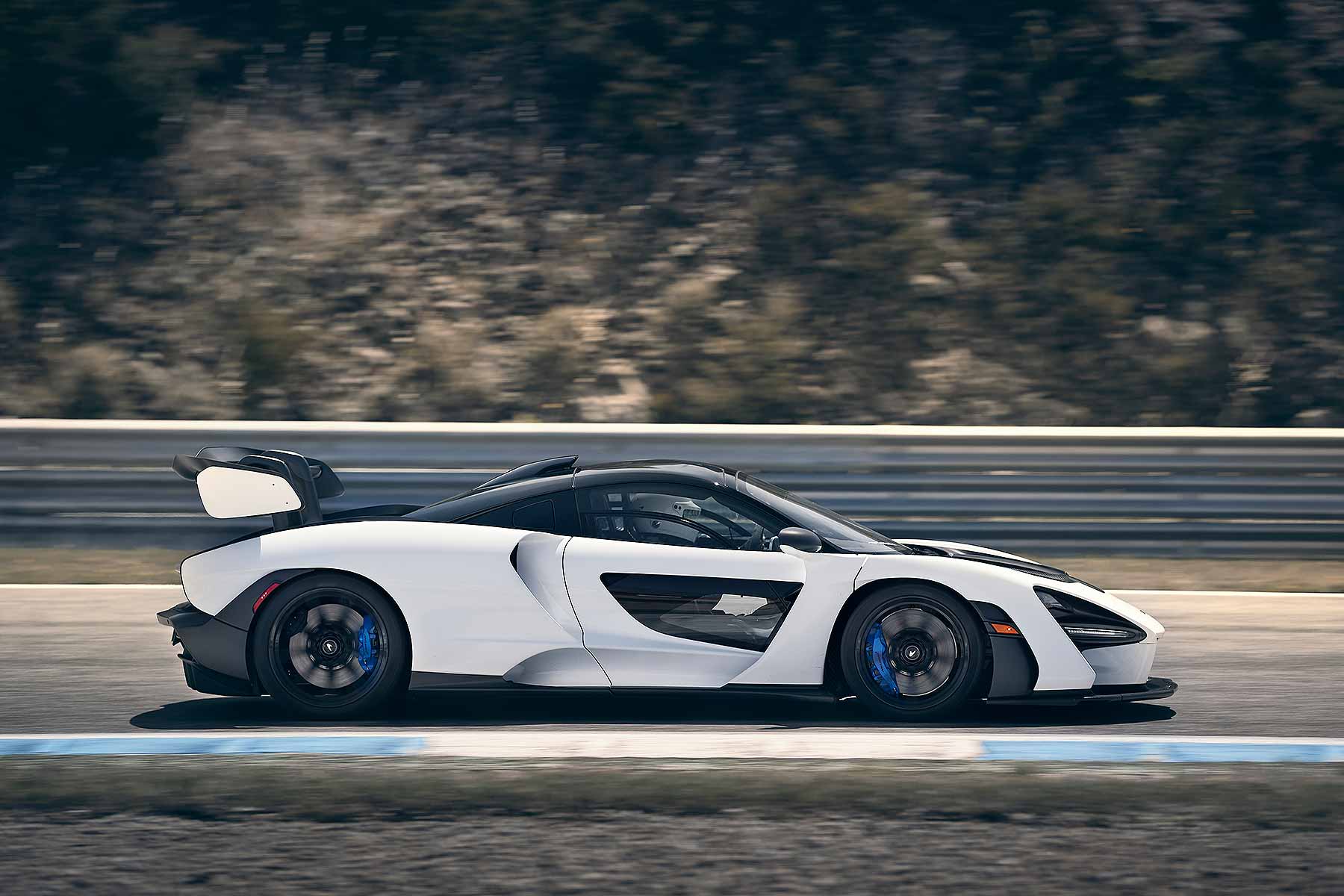 I had two sessions. One to learn it, then take a breather, then go out again. McLaren’s proud that something so extreme is a fully road-legal car (“Many owners will drive it to the track, rather than trailer it,” said project manager Ian Howshall), but track-focused it is.

So I get my driving position right, then a man buckles up the four-point harness so I can’t move. I see his muscles quiver as he pulls down hard on the belts. I’m pinned. Necessary, in a car that can develop more than twice the force of gravity under braking. 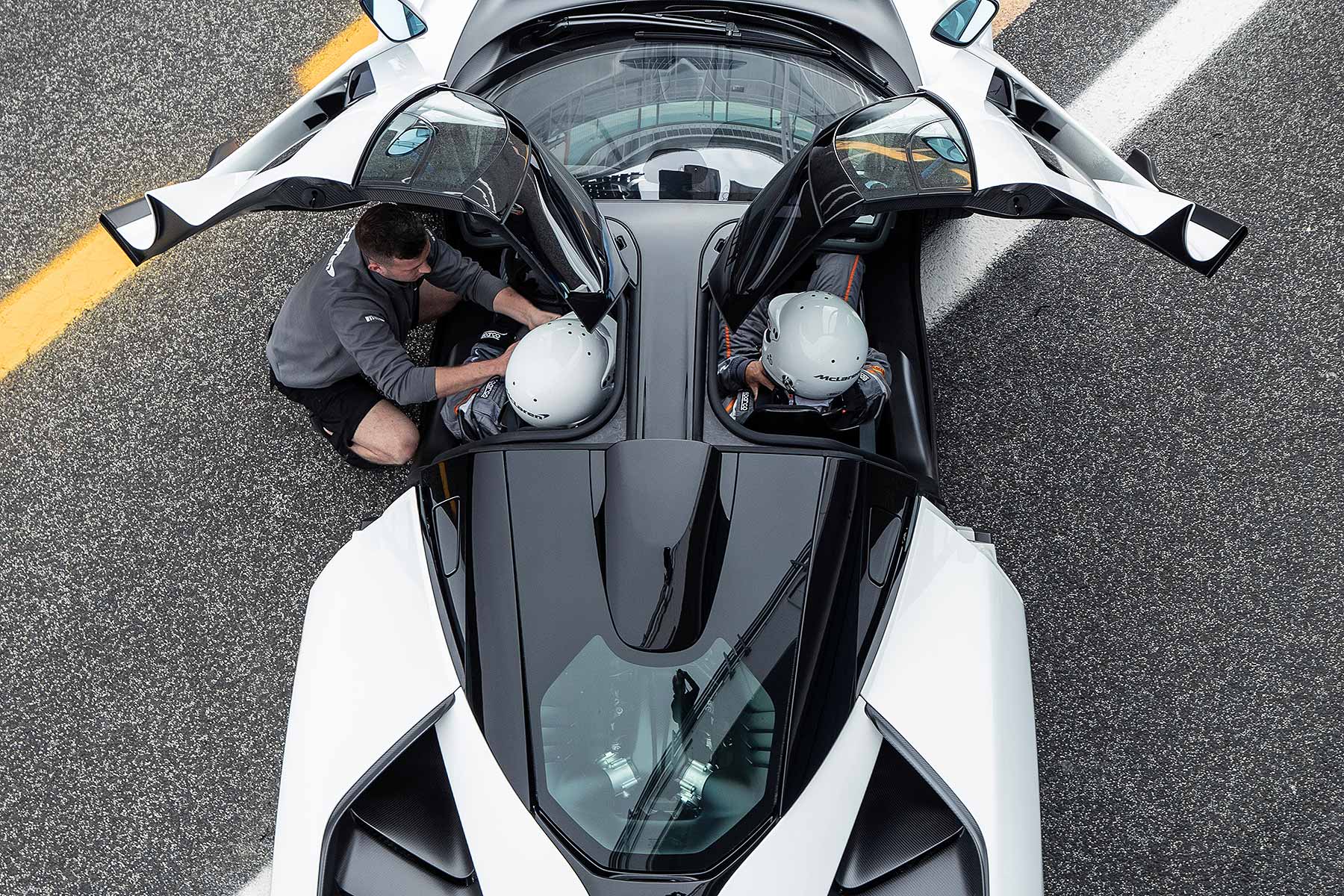 Visibility is superb, like all McLarens. The windscreen is deep, the glass panels in the roof flood the cabin with light – and this one has the optional clear panels in the doors that add to the drama. Jamie says the passenger side one is great for helping drivers trace the corners. For now, I plan to be looking straight ahead.

The cabin is simple, with big buttons and logical layout, ideal for using with racing gloves, through the restricted view forward from a race helmet. Most of the controls are in the roof panel so, upon Jamie’s instruction via the intercom (McLaren thinks of everything), I reach up and press the starter, and immediately feel something louder, rawer and more vibey than the 720S. To the signal of the pit guy, we’re away, car taut and tight, me similarly tense.

McLaren Senna owners, your first few laps will be an overload. The intensity of the noise, the vivid acceleration, the alacrity and the sheer lack of hesitation or layers of sponge and padding between you and the car and the racetrack. Even compared to a 720S, it feels like a racing car, has the attitude of one, and everything you do in it is an event.

Yet even after a few laps of feeling my way around, it’s clear the Senna’s on my side. There’s a planted assurance to it, a sense that it’s at home on the racetrack in a way the 720S isn’t quite so. By the end of the run, I’m getting faster, yet the Senna hasn’t plateaued. It’s simply getting better.

Then there are the brakes. Stupendous isn’t the word. The meaty pedal has a race car’s firmness, and feedback, and shortness of travel, and impeccable progression. They’re made for stamping on hard then blending carefully out – and the power, combined with the feel, is ludicrous. I constantly pull up way short to corners because they’re so bafflingly good.

Wait until you really work them hard, says Jamie. But I’d need some more brave pills for that. 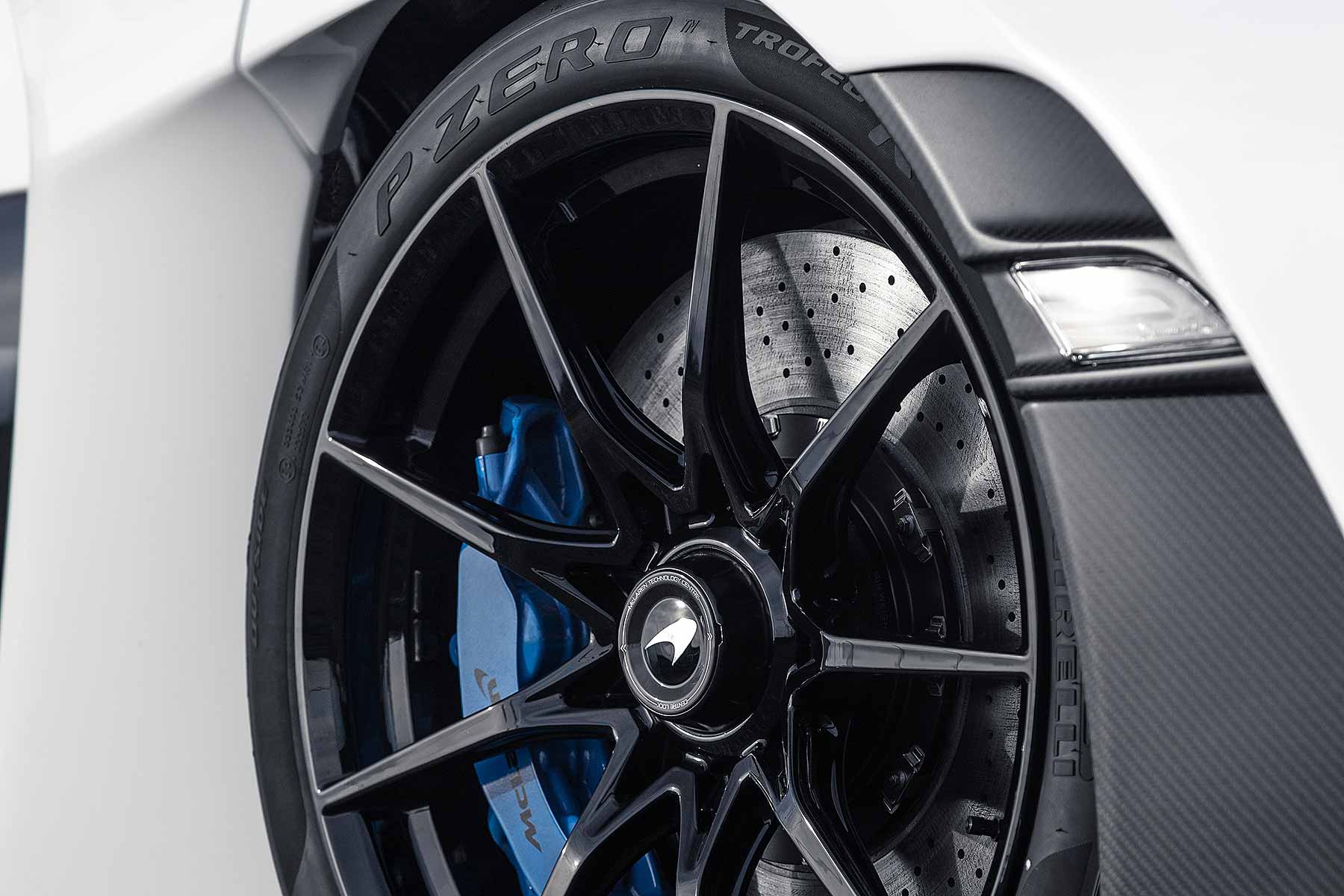 It’s stunning, like no other car I’ve ever driven, but it’s time for a breather – if only to get my head around the Senna’s huge downforce and active aerodynamics, that mean it gets better as you go faster, and is at its best if you can stay on the power through the fast stuff, rather than chickening out and lifting.

I’ve never experienced downforce quite like this in a road car. It takes some mental processing (that’s why it looks like it does, too: aero first, pretty stuff second). 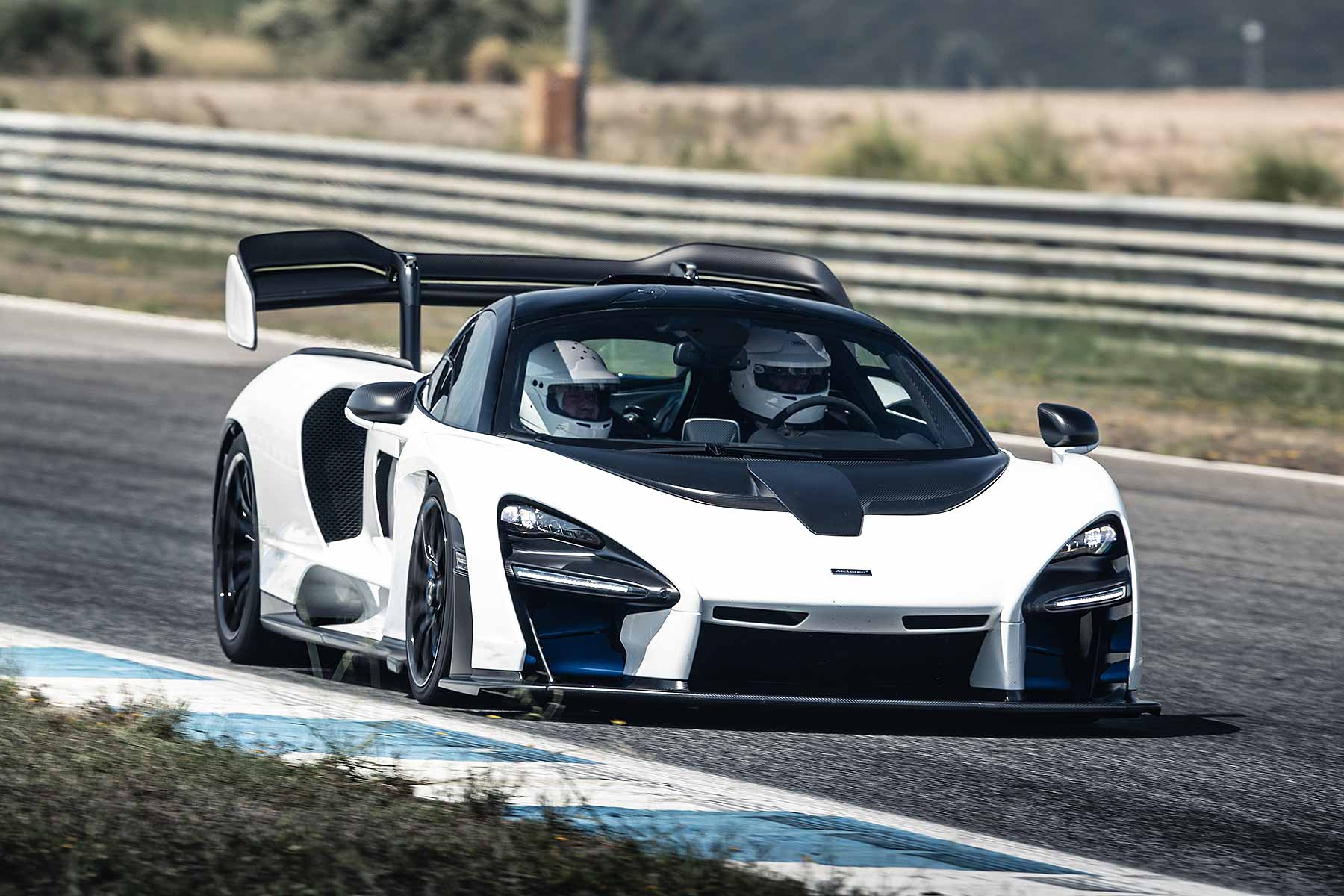 “How was it?” says Jamie, as we cruise back to the pits on the cool-down run. I blather something, swear a bit. “It’s fast, but you’re not overwhelmed or intimidated by it. There’s never any flighty skittishness; it’s rock-solid and planted. It feels like it’s on your side. Everything is an event.”

Jamie understands. “And can you believe, it’s also road-legal?” That really is the most amazing thing of all: that it does all this, yet can still sit on the M25, getting papped by supercar spotters.

I had lunch with Ian. The Senna’s been an amazingly detailed engineering project. “We haven’t compromised.” And that was before they found it what it was going to be called. “When the Senna name was confirmed, the team became even more focused. It’s an attitude thing.”

Detail extends to matching the frequencies you feel through the seat, to the steering wheel, to the pedals, to the engine. “Nothing is out of phase.” Snippets like this abound. This is no ordinary car project. It’s been an obsession. 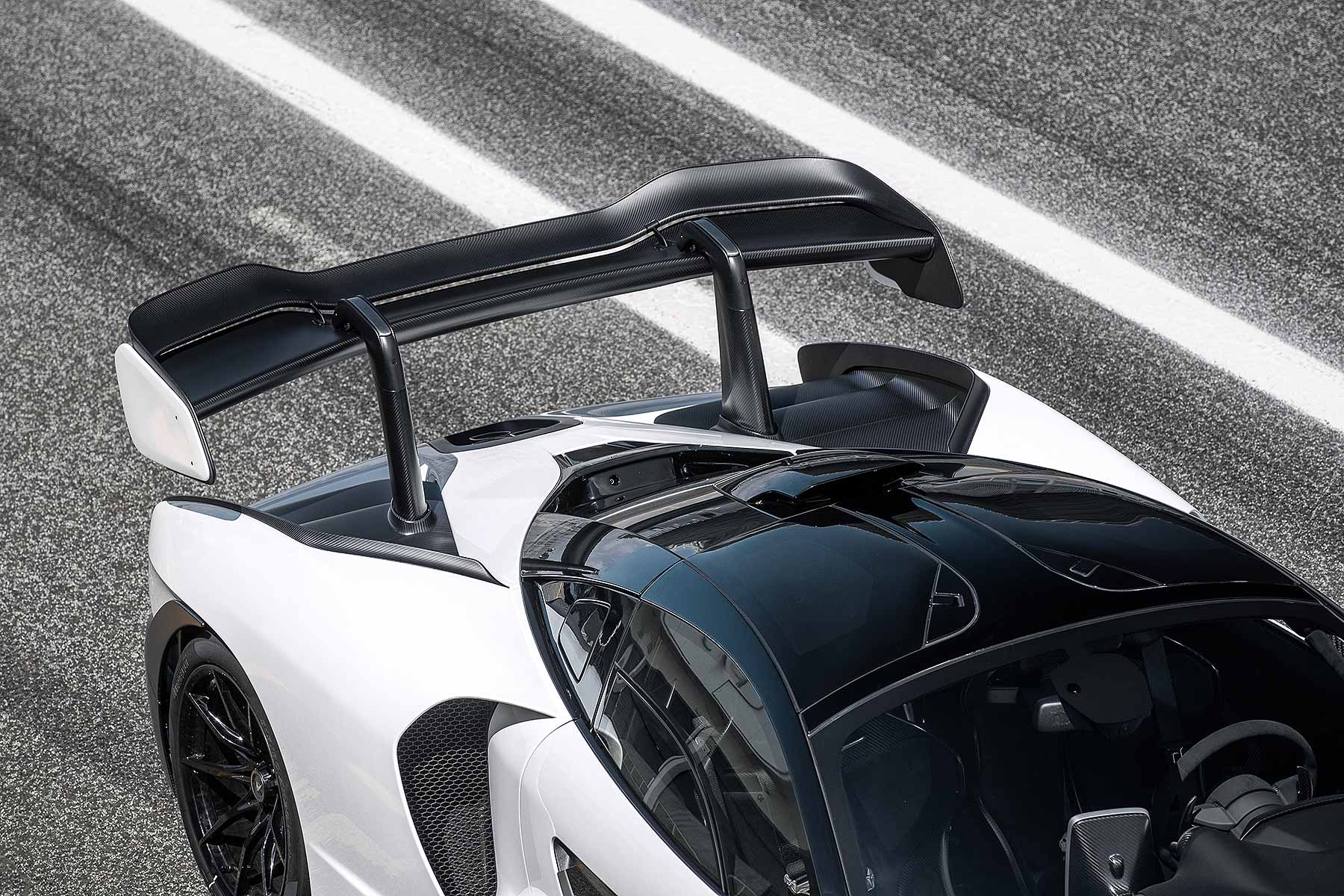 Parts of the Senna are hung from the pit garage roof, so we can hold them and feel their lightness. The rear wing is there. Remember how it can help generate 800kg? It weighs just 4.97kg. A hugely complex active aero programme adds to its effectiveness.

I watch one pull out the pit lane: it cycles through a calibration programme as it tours away. All that’s happening out on track too, but I was never aware of it. I just enjoyed the remarkable confidence and sky-high limits it brings. 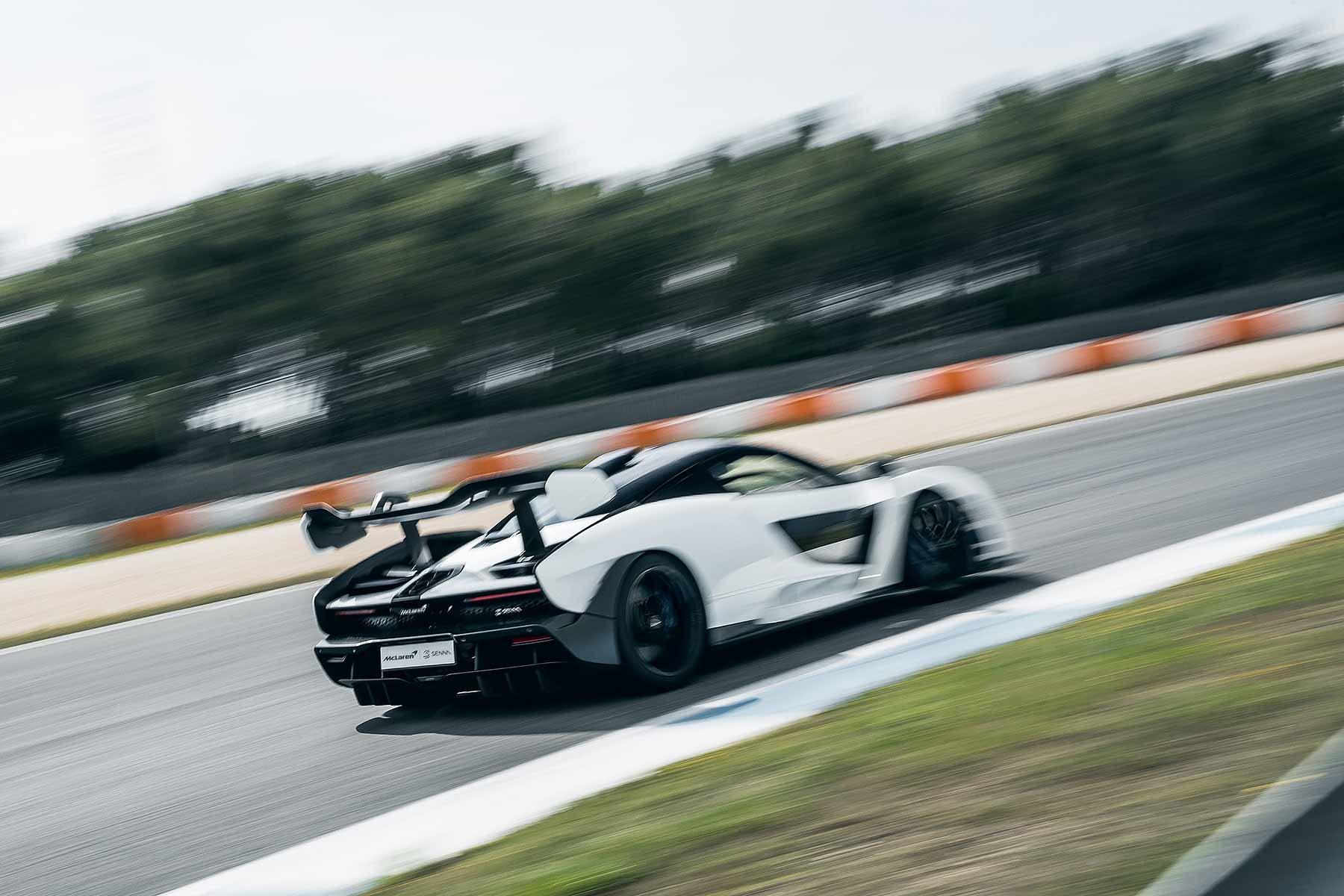 Time to go back out on track. Jamie, the loveliest racing driver you’d wish to meet, briefs me over the intercom. “You know what to do. Let’s go for it this time.”

I do, and it’s glorious. The confidence this car inspires is ridiculous. It has 800hp! Yet I’m happy to get on the power early, correct the controlled slide, whoop, then brake deep into the next corner, hit the apex foursquare, lean on the rear out of it and savour the magic of downforce by not lifting through the next.

It’s all so intuitive, and direct. There’s no squidgy hesitancy, no barriers, and that stiff yet flowing breathability to the suspension you only get from a really well set up racing car. Chuck in steering with the meaty clarity of a kart and chassis agility and chuckability to match, and the intercom becomes a stream of thrilled expletives.

Those brakes again. They really can’t help but dominate. They’re carbon ceramic, conduct heat even better than normal ceramics, so can run 150 deg C cooler. They’re so good, McLaren had to strengthen the brake calipers to match. Even so, there’s not too much black magic behind them, says Ian – but their effectiveness is awe-inspiring. They haul away high speeds in an eye-blink, time and again.

Braking in a Senna involves being brave, feeling fear as long as you can bear, then kicking the pedal into the floor, and still coming to the corner with space to spare. They are unreal. 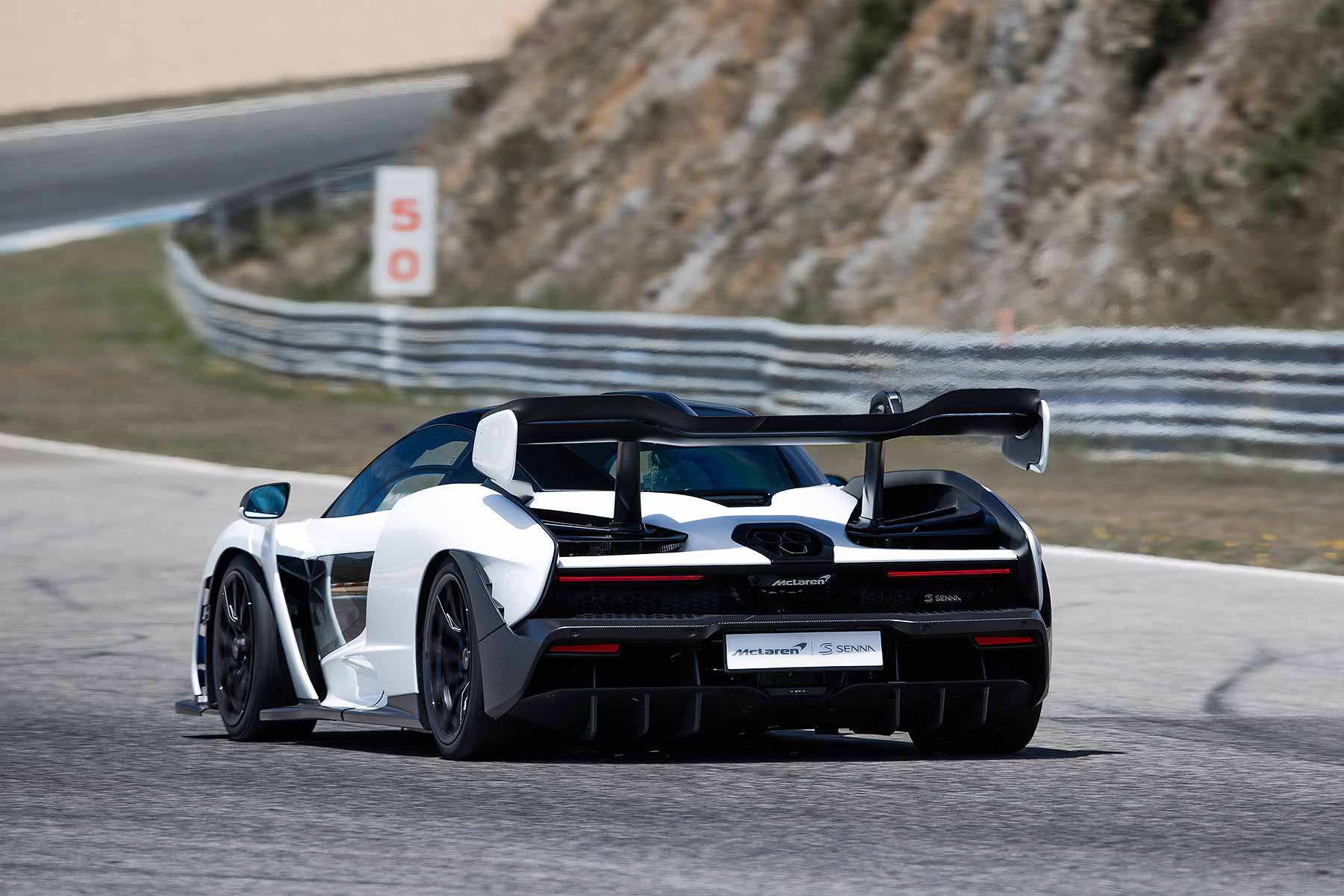 I do that just one more time, then feel just one more perfectly neutral and incisive explosion out of the corner, before it’s our cool-down tour. That’s my McLaren Senna experience complete, for now. I gush over the radio to Jamie, and can sense he’s beaming back. “Isn’t it amazing?” Yes, like no other road car I’ve ever driven.

The next day, I woke up, and it was still the first thing on my mind. The thrill and excitement still pulsing through me was better than any coffee shot. How good is it? Full of all things Senna, my mind wandered. Remember Senna at Donington in 1993, when he tore through the field on the first lap, then ran rings around them for the rest of the race? I was there. I went to school the next day with a similar feeling. Senna’s dominance that day was like my experience of the Senna.

Does it live up to the name? Without doubt. This McLaren is Senna. I now have a hesitation-free answer when people ask me what’s the best car I’ve ever driven.