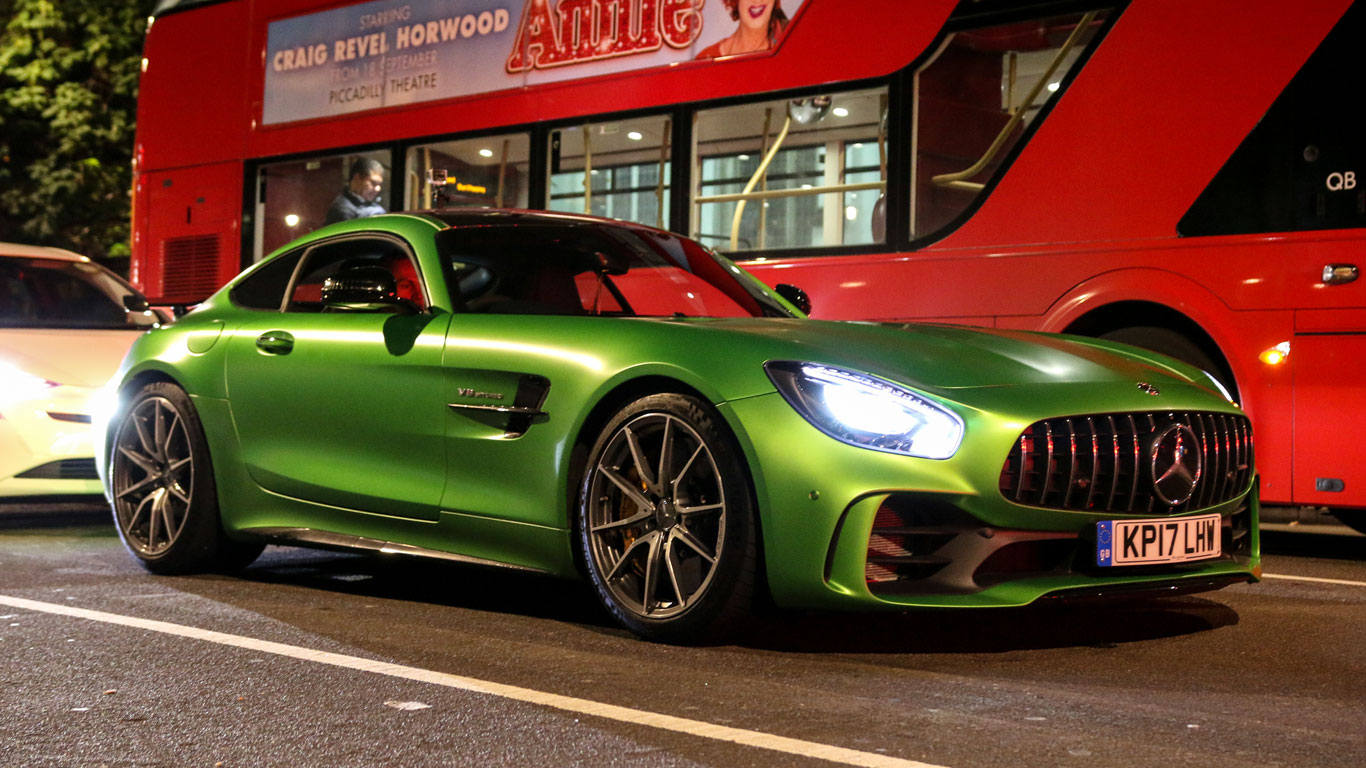 Metallic AMG Green Hell Magno paint is a £7,500 option on the Mercedes-AMG GT R. That takes it up to more than £150,000-worth of ‘racing car for the road’. And it looks the part, with a huge rear wing and enormous bonnet – the latter covering a 585hp 4.0-litre twin-turbocharged V8.

If you’re someone who doesn’t like to stand out, this probably isn’t the car for you. I’m not the sort of person who likes to stand out. I get a quiet thrill out of reviewing a Nissan Qashqai.

So why was I in central London in this ‘look at me’ supercar? It was video guy Bradley’s idea. He’s young, an AMG GT R is his dream car and he wants to be seen in the one we have on test for the week. 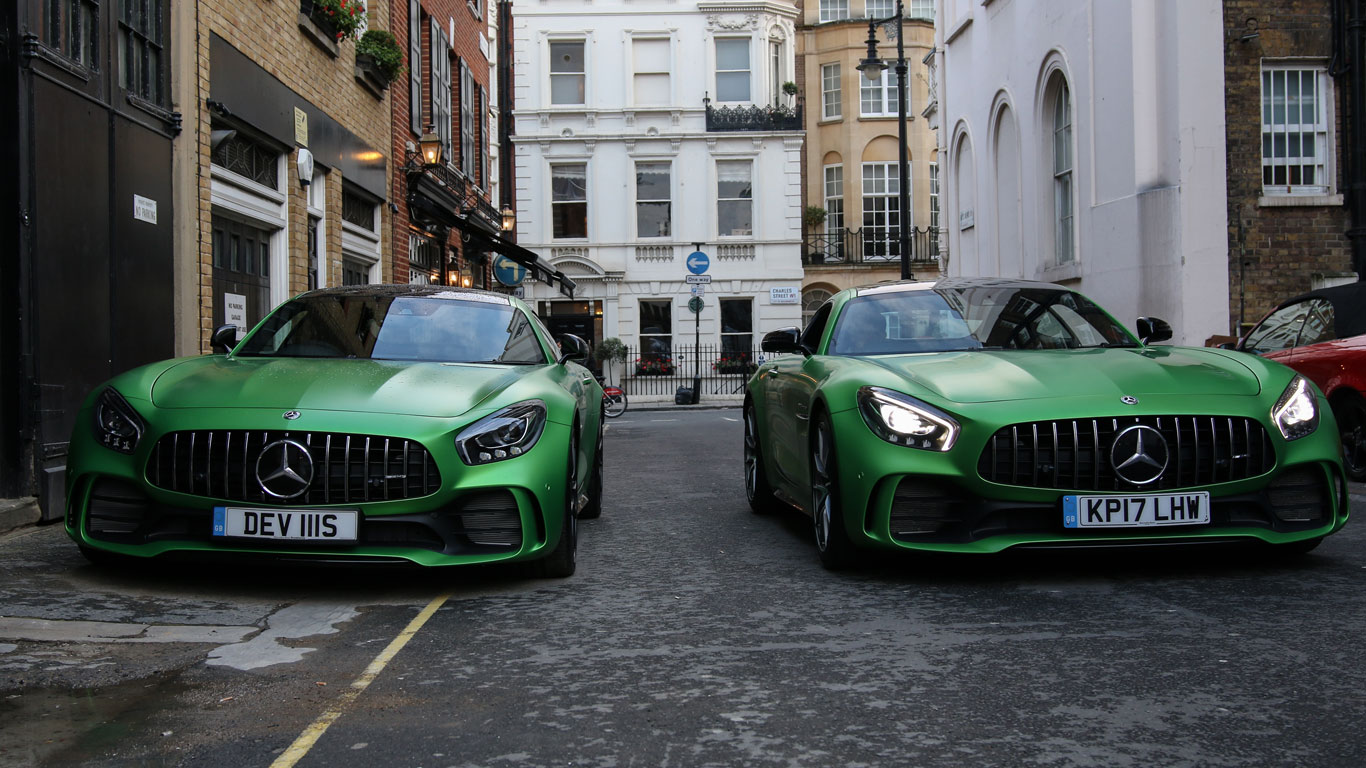 “We could take it on a road trip,” I suggest. Scotland isn’t that far when you’ve got a near-200mph supercar at your disposal. Not that we’d advocate speeding.

He protests. He tells me taking the GT R into London will make people happy. It’s the sort of car that people love to see, he says. I think people look at it and think impolite words, but maybe that’s just me?

If you’re not familiar with supercar spotting, it’s pretty much what you’d expect. In my day, youths would be happy spotting trains or Eddie Stobart lorries. Now it’s supercars.

There are hotspots in London where spotters will gather and wealthy (or, like me, faux-wealthy) supercar drivers show off their cars. It’s actually become a real issue for the residents of Kensington and Chelsea, especially over summer when rich Saudis, Emiratis and Kuwaitis ship their motors across just to be seen in London.

A Public Space Protection Order has now been put in place around areas where supercars gather in London. This gives police the power to issue dispersal orders to drivers they suspect have entered the area just to show off.

Even teenage supercar spotters can be given an official order to leave the area. It promotes anti-social driving, apparently. 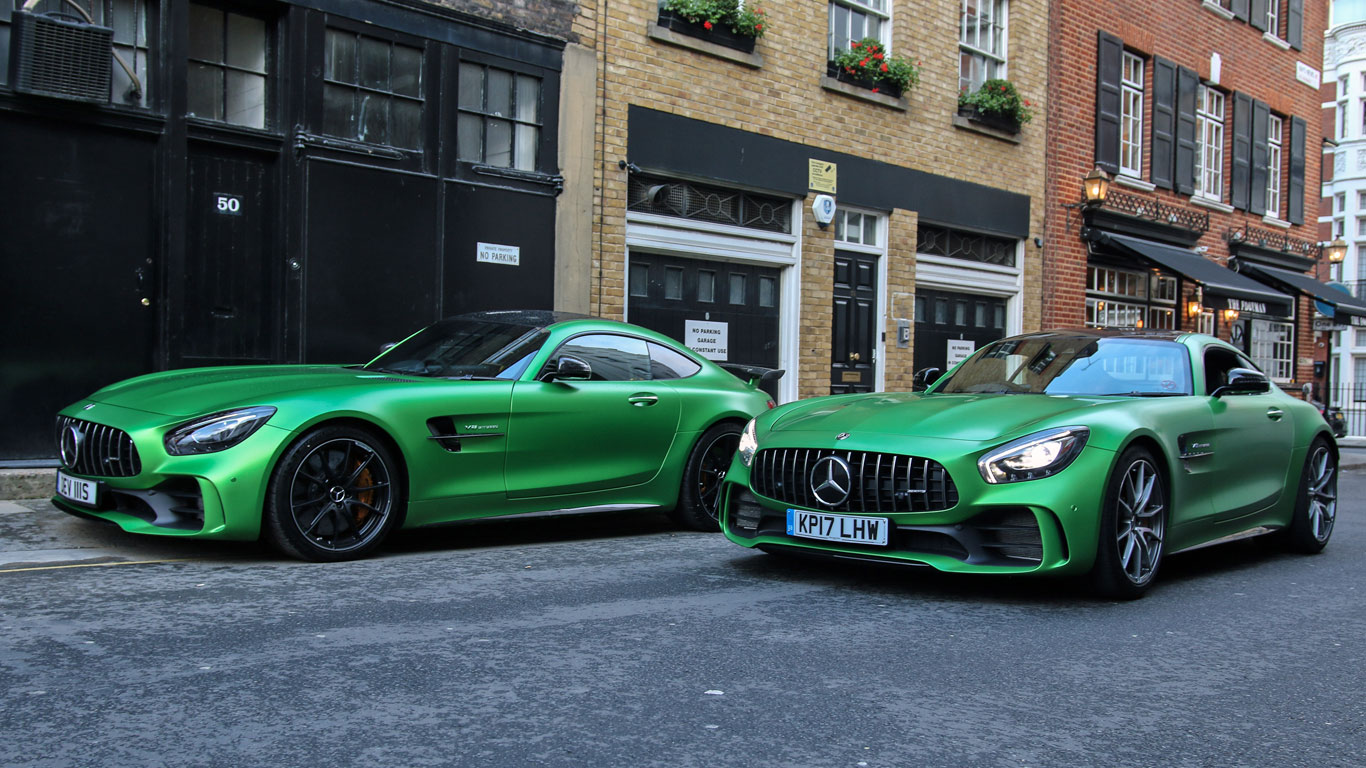 Against my better judgement, I’m on Sloane Street being ignored by gangs of supercar spotters. Suddenly, on a road frequented by Lamborghinis, Ferraris and even a Porsche 918 Spyder, our GT R looks like a Qashqai in suburbia. “Give it some revs,” says Bradley, as he presses the GT R’s noisy exhaust button.

I’m reluctant – there are signs warning that anti-social driving will not be tolerated – but I give the AMG’s throttle a mild prod and watch as supercar spotters start to notice us. A guy in a Ferrari California T drives alongside, giving us a cool raised eyebrow acknowledgement. 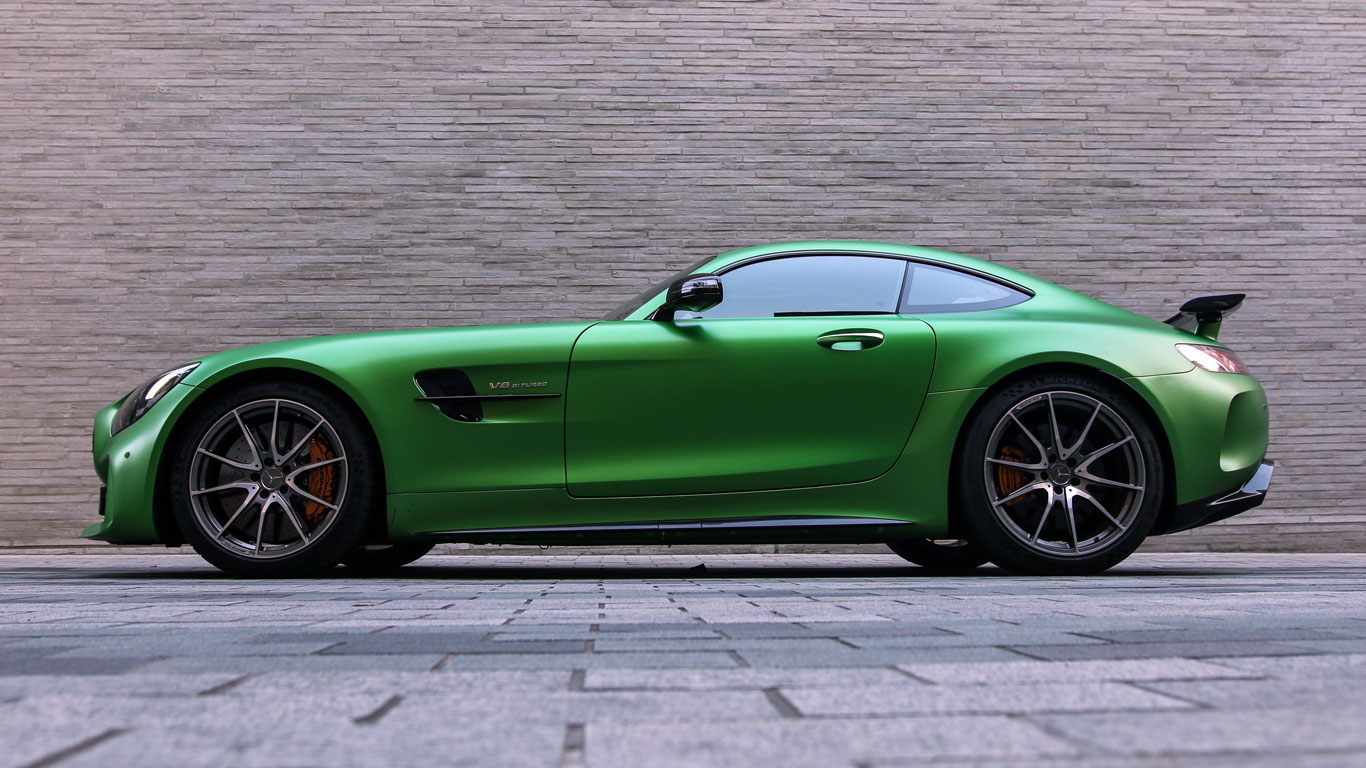 In truth, we were hoping to be a social media sensation. I wanted to embed pictures and videos of our GT R, driven by a reluctant red-faced driver, in this feature. While lots of people took our photo, we’ve since failed to find the pictures anywhere online.

As we drive along one back street, we spot a flash of green the same as ours. A three-point turn later, and I’m parked alongside an almost identical GT R. It’s even more eye-catching than ours, though, with black wheels and a ‘devil’ number plate.

AMG GT R has titanium rear exhaust silencers, but I’m sad to report they don’t work very well. If at all. pic.twitter.com/T6cNsKqVGD

No wonder our standard-looking car hasn’t been deemed worthy of an Instagram post, when there’s an even more outlandish one parked nearby.

Despite being a damp evening, there are still plenty of supercars about. I’m amazed – and slightly disappointed – at how many owners are happy to spend an evening loitering around the back of Harrods. I wonder how often they use anything close to the car’s full potential. 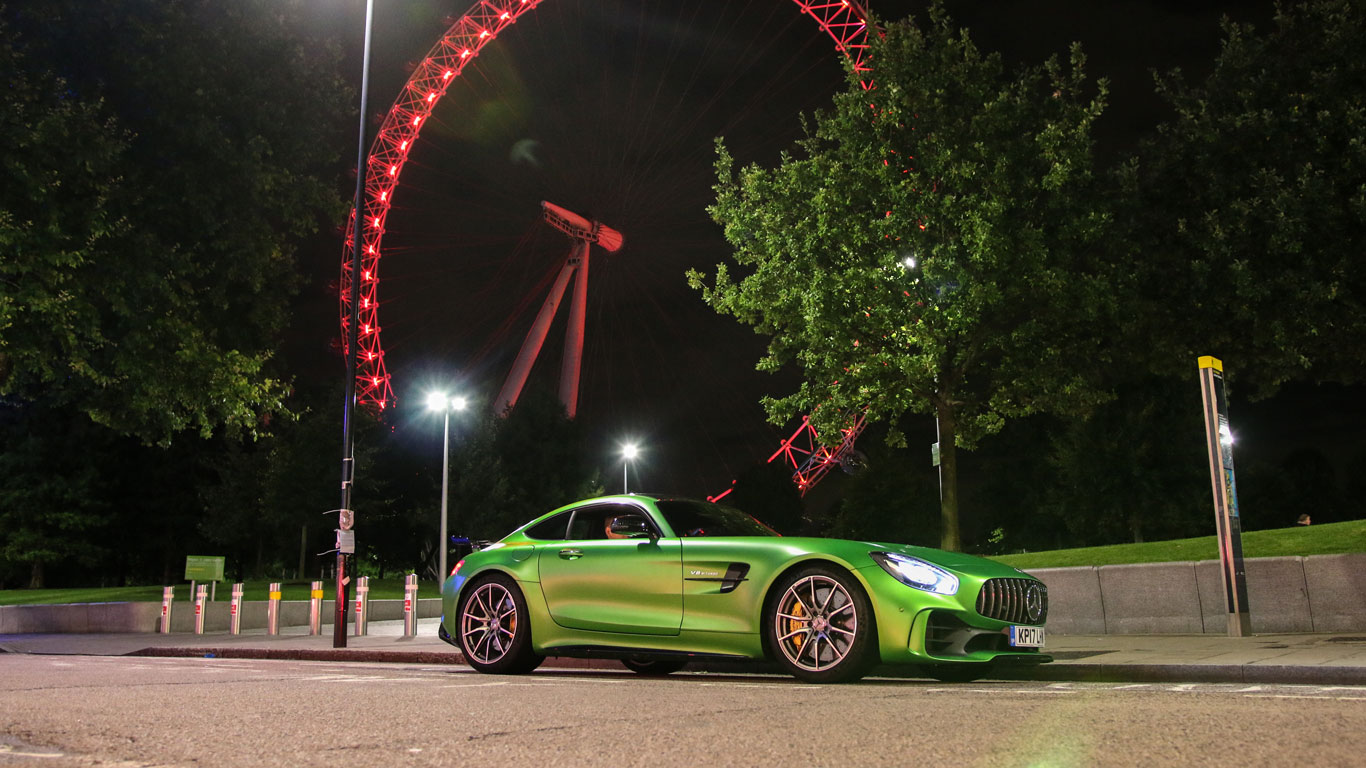 So, while we failed at being spotted ourselves, we did spot lots of supercars. Watch our video to get a taster of a Saturday night in Chelsea. And if you’re a resident, I’m sorry if we disturbed your evening.