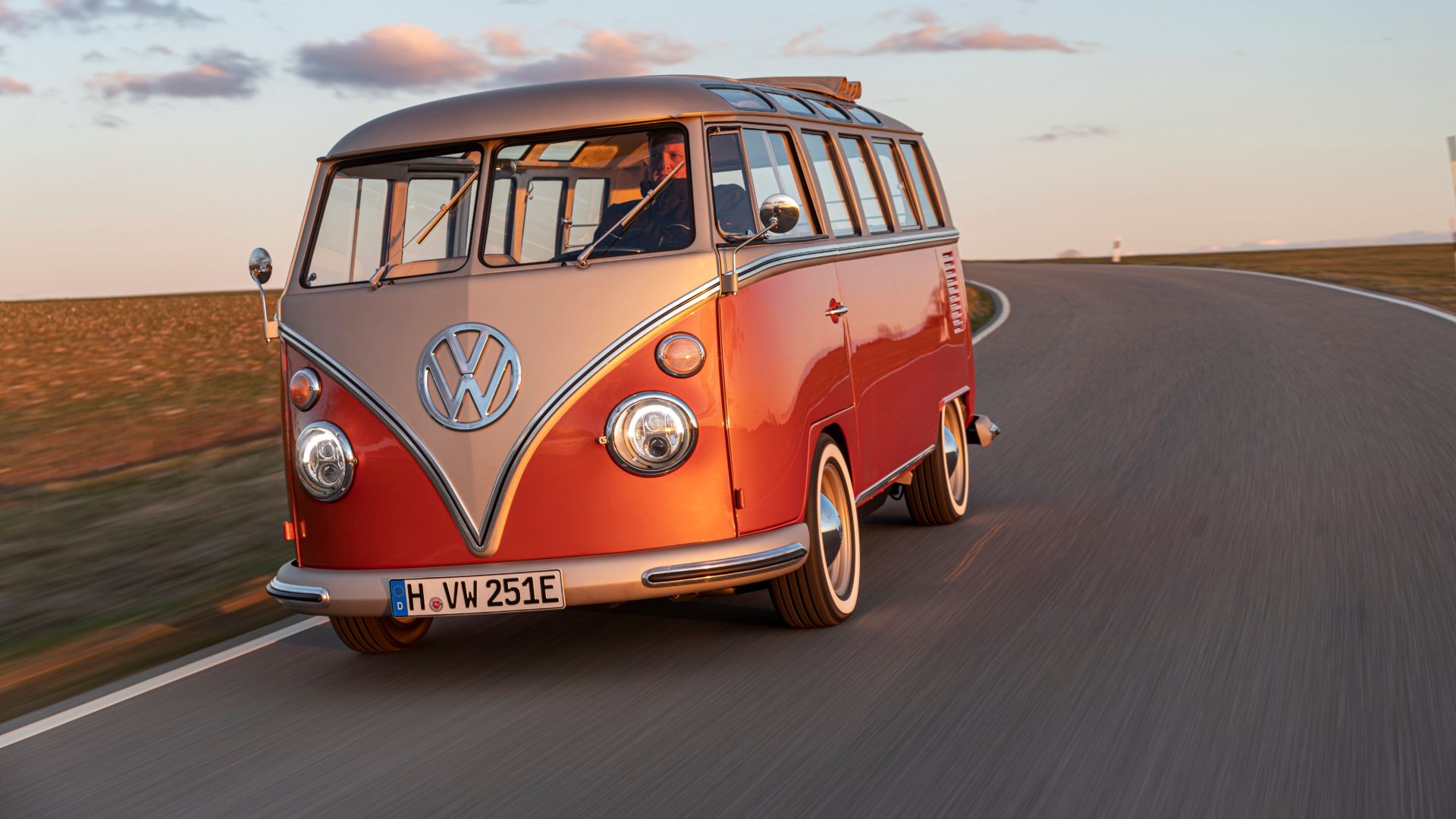 Volkswagen Commercial Vehicles and eClassics have electrified a T1 bus – the classic camper – from 1966. It’s called the e-Bulli, and if you want to swap you air-cooled power for ions, you can: eClassics will take commissions for conversions.

As with VW’s previous classic electric conversions, the e-Bulli T1 exchanges its choppy, unreliable, smoggy and slow air-cooled motor for an electric drive system from a modern VW EV. It packs an 83hp electric motor in place of the original 44hp four-pot. Amazingly, this is the most powerful T1 that Volkswagen has ever made.

It’s not just Volkswagen that electrifies its classics. We’ve driven a Volkswagen Beetle that’s got EV power courtesy of electrogenic. 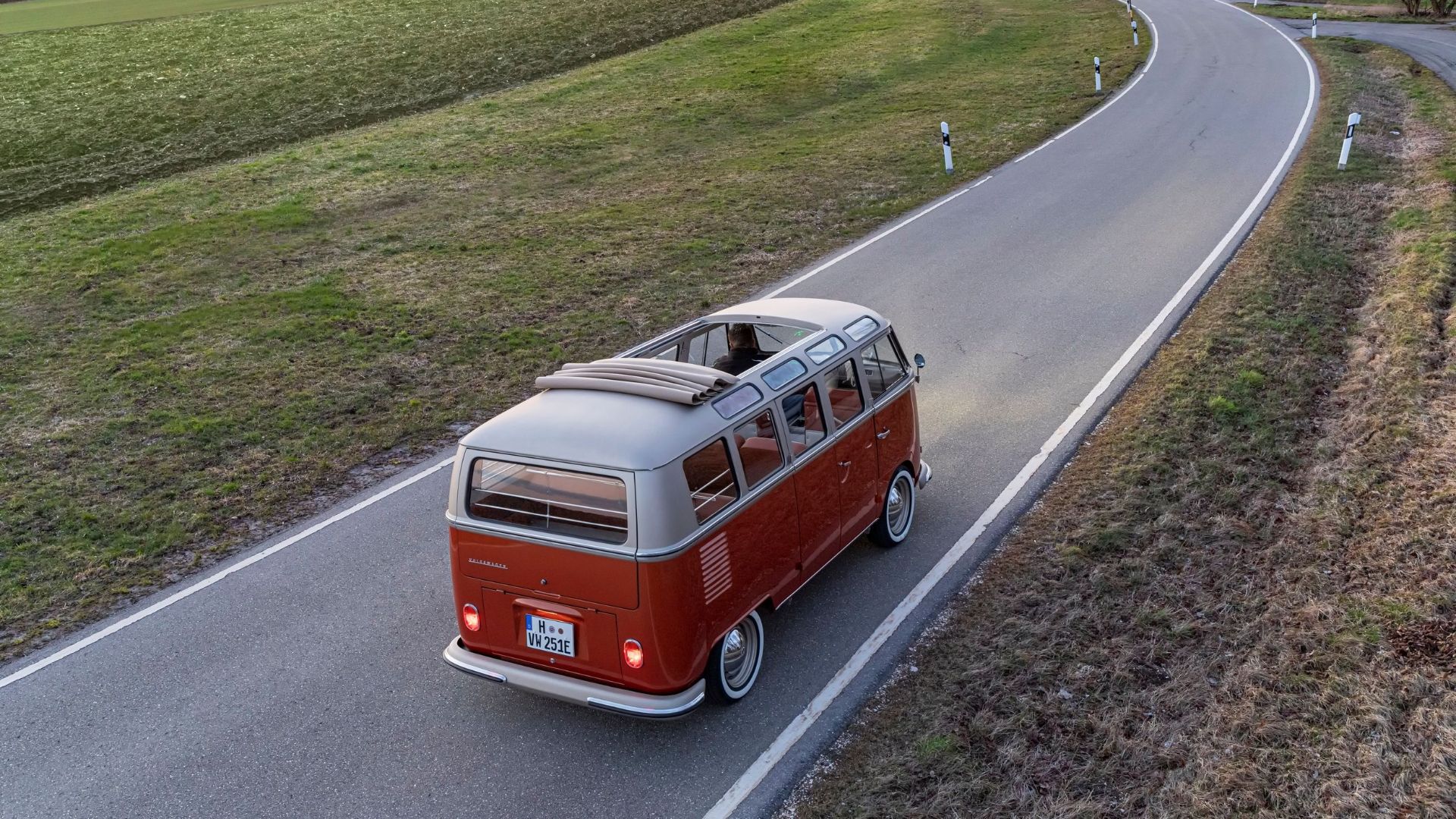 Drive goes to the wheels via a single-speed transmission. The new lever, instead of swapping cogs, swaps between P, R, N, D and B. The first four are relatively self-explanatory. B, meanwhile, allows the driver to vary the degree of energy recovery under braking. The e-Bulli can be charged up to 80 percent in 40 minutes, using CCS charging. A full battery will get the electrified bus 124 miles up the road before it needs to juice up again.

It may look like a proper classic, but it’s not just the powertrain that’s changed underneath. A new multi-link front and rear axle with coilover shocks join a new rack-and-pinion steering system. The e-Bulli also features internally ventilated disc brakes. 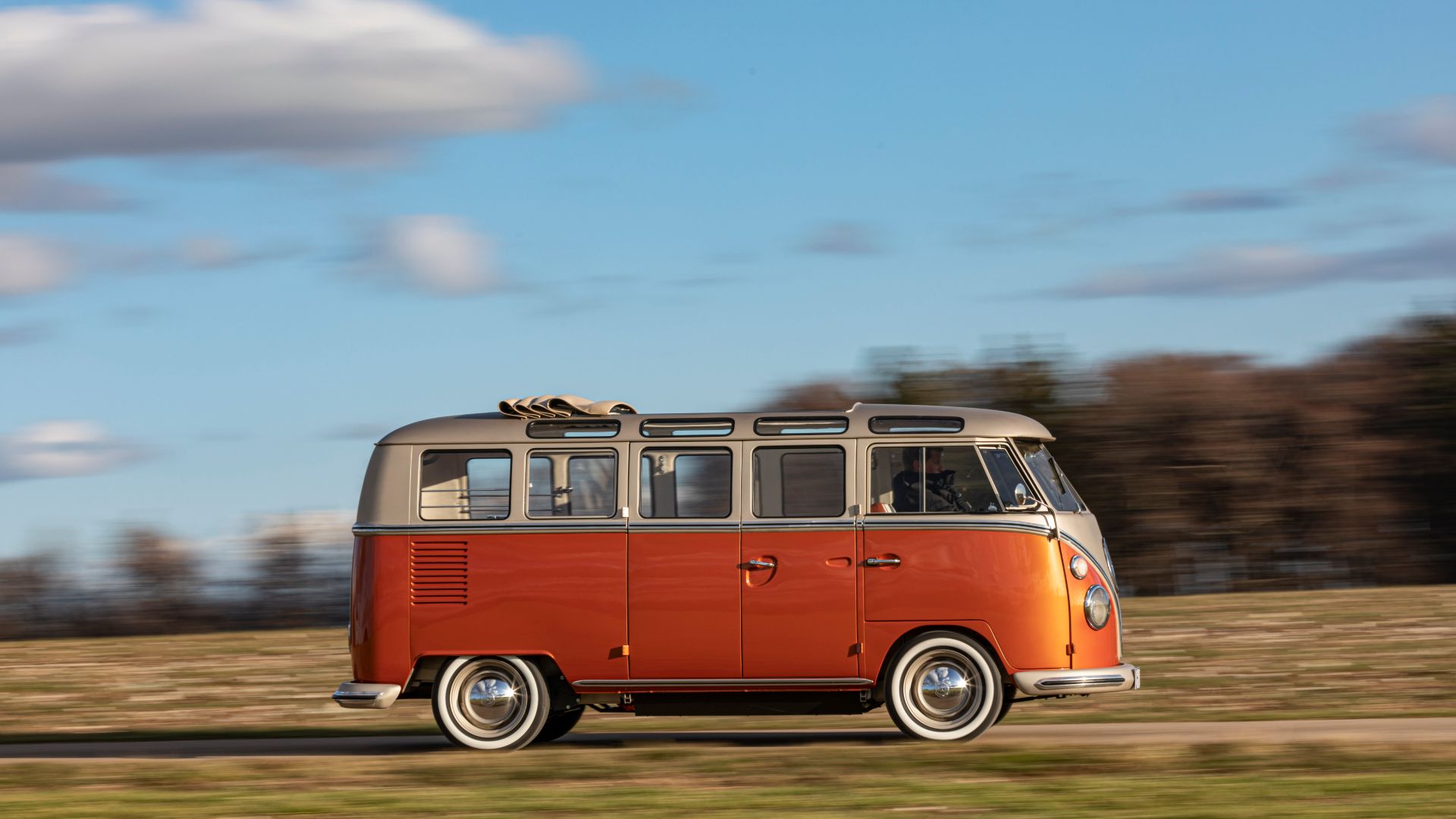 All that said, there are exterior hints as to the e-Bulli’s reinvention under the skin. There are new round LED headlamps, with day-runners.

At the rear, there are also LED charge indicators, so you know how much juice it has as you walk up to it. What is hidden, is the charging port, neatly behind the rear number plate. Overall, it’s subtle enough to retain the original’s classic style. 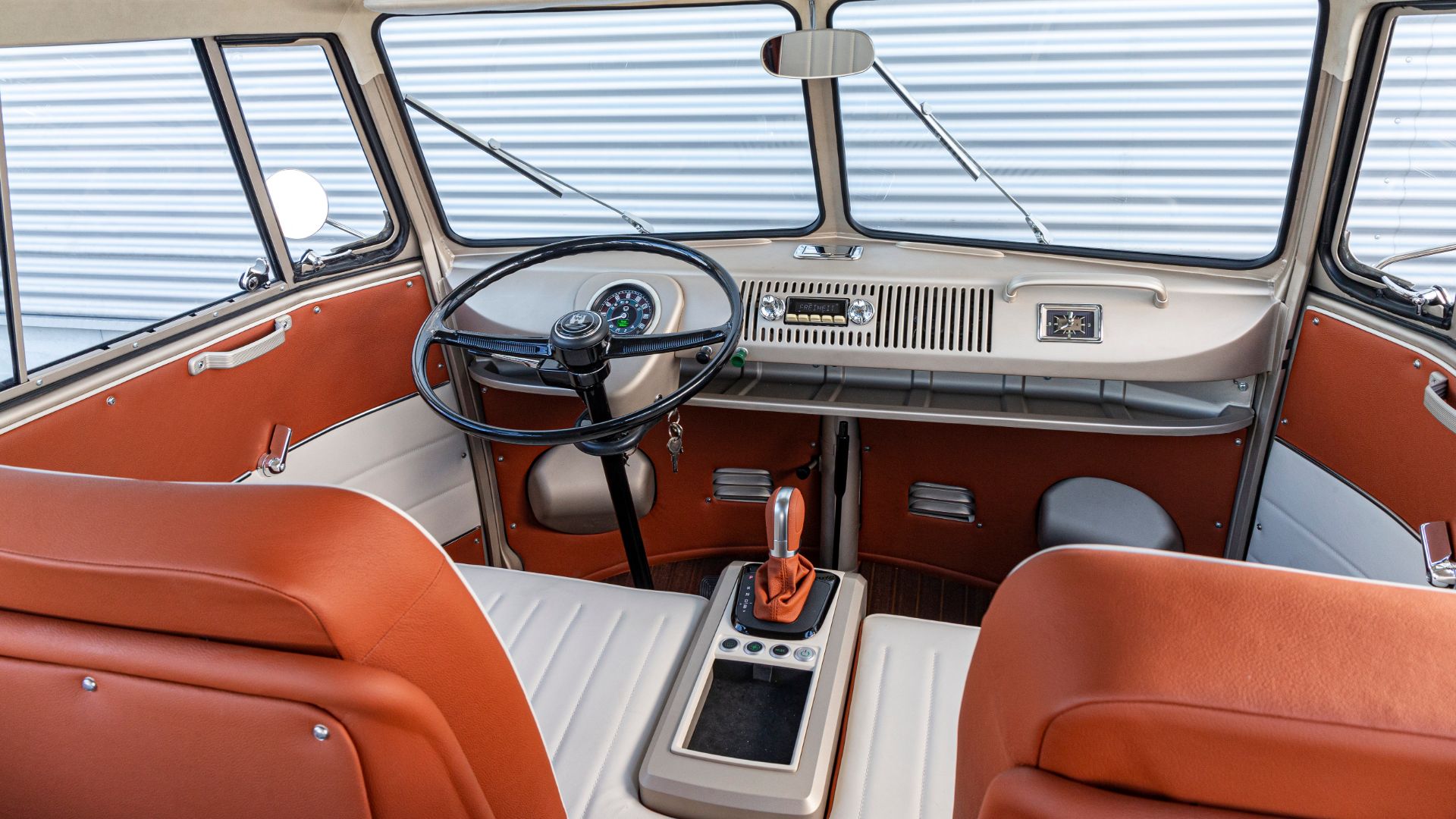 The subtle update continues on the inside, while being rigorously faithful to the original’s style. The dial is old-school, but with a digital element within. The wheel is as was, while the seat trimmings match the exterior.

Out of sight, on the roof console, is a tablet which features Volkswagen ‘We Connect’, with all the connectivity features you’d expect on an ID.3 You can even check the charge status of your 1966 e-Bulli camper via your smartphone. The radio has a proper retro look, but has DAB digital radio, Bluetooth and USB built in. The best of both worlds, like much of this build. 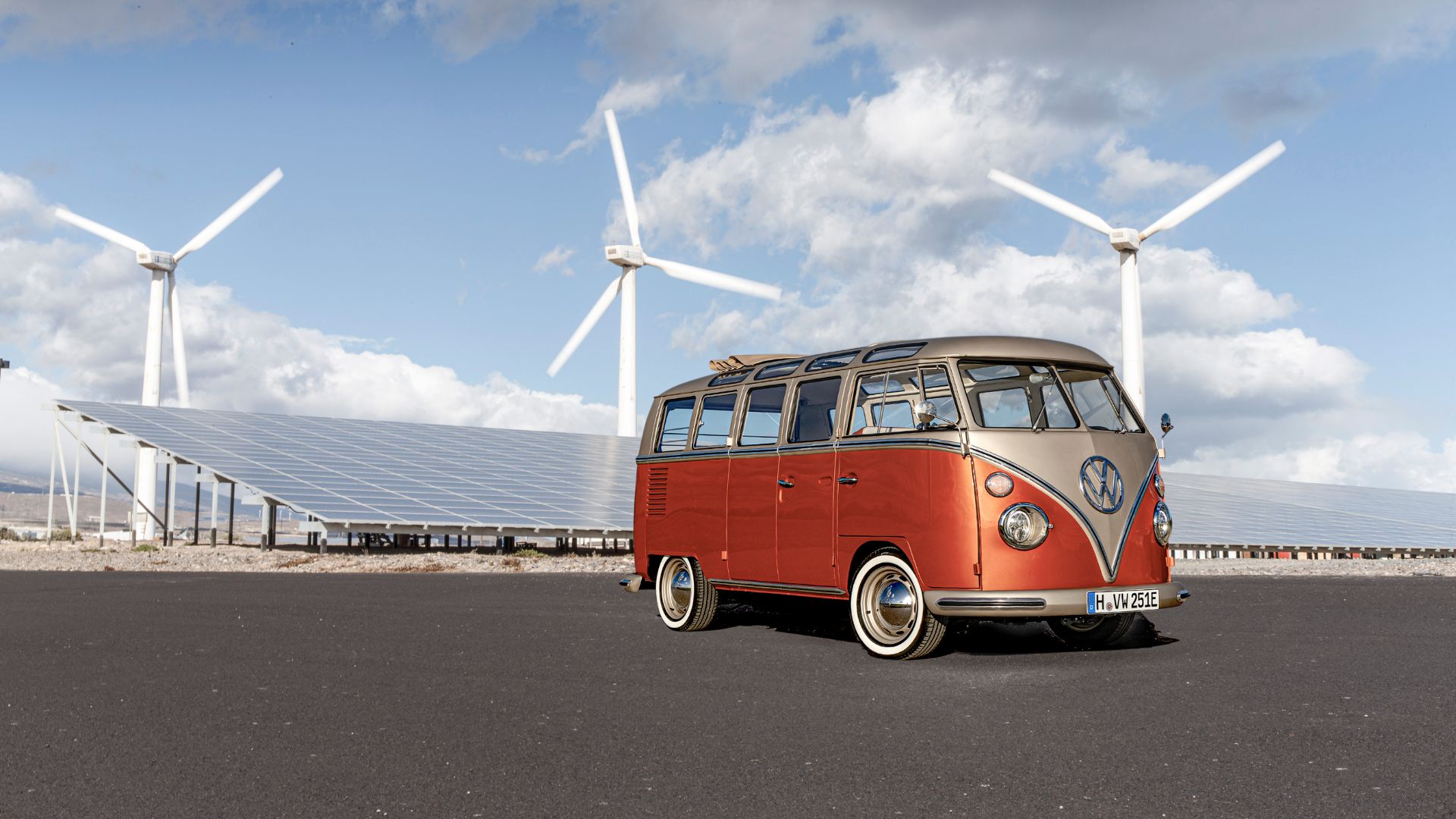 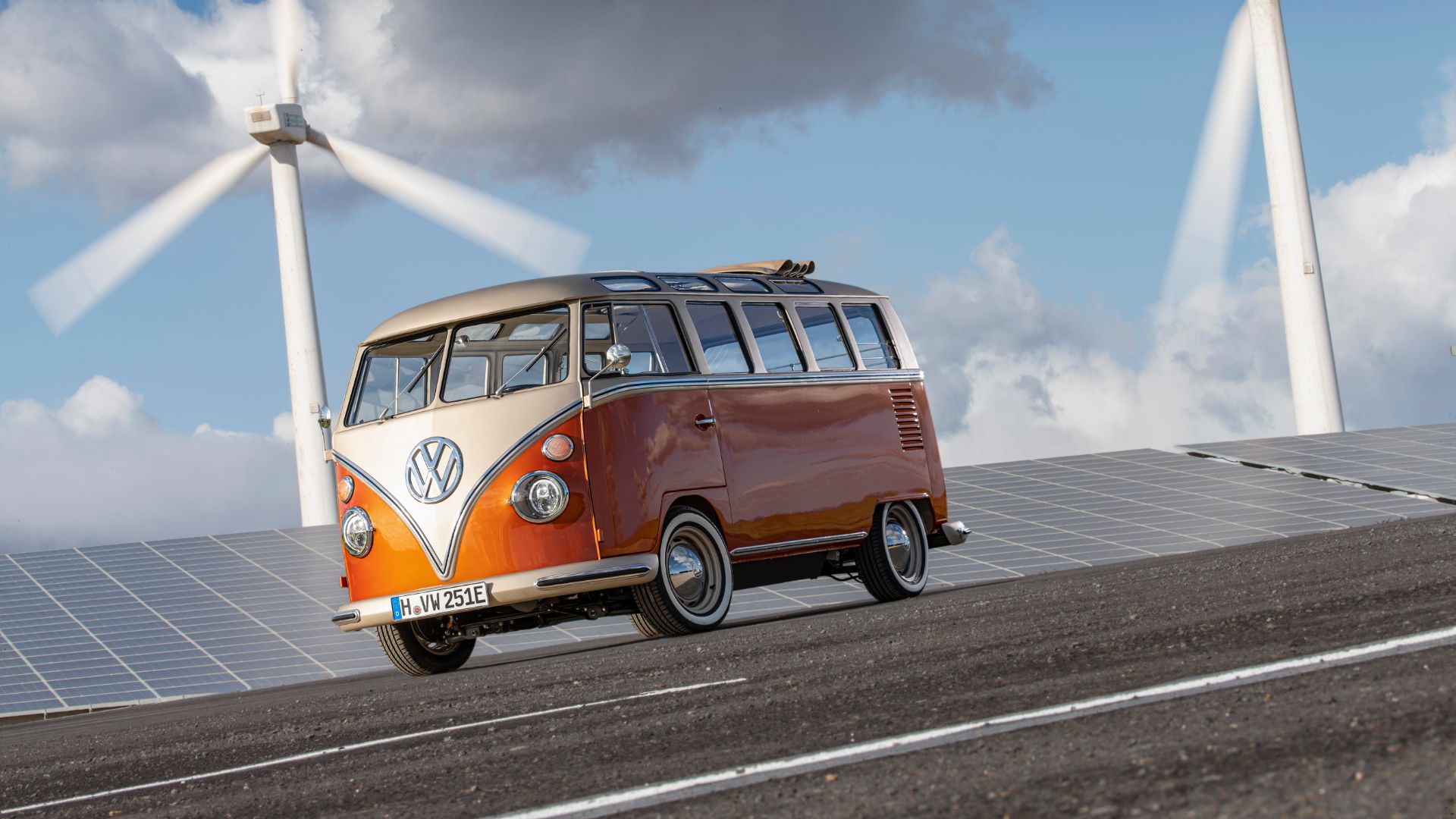 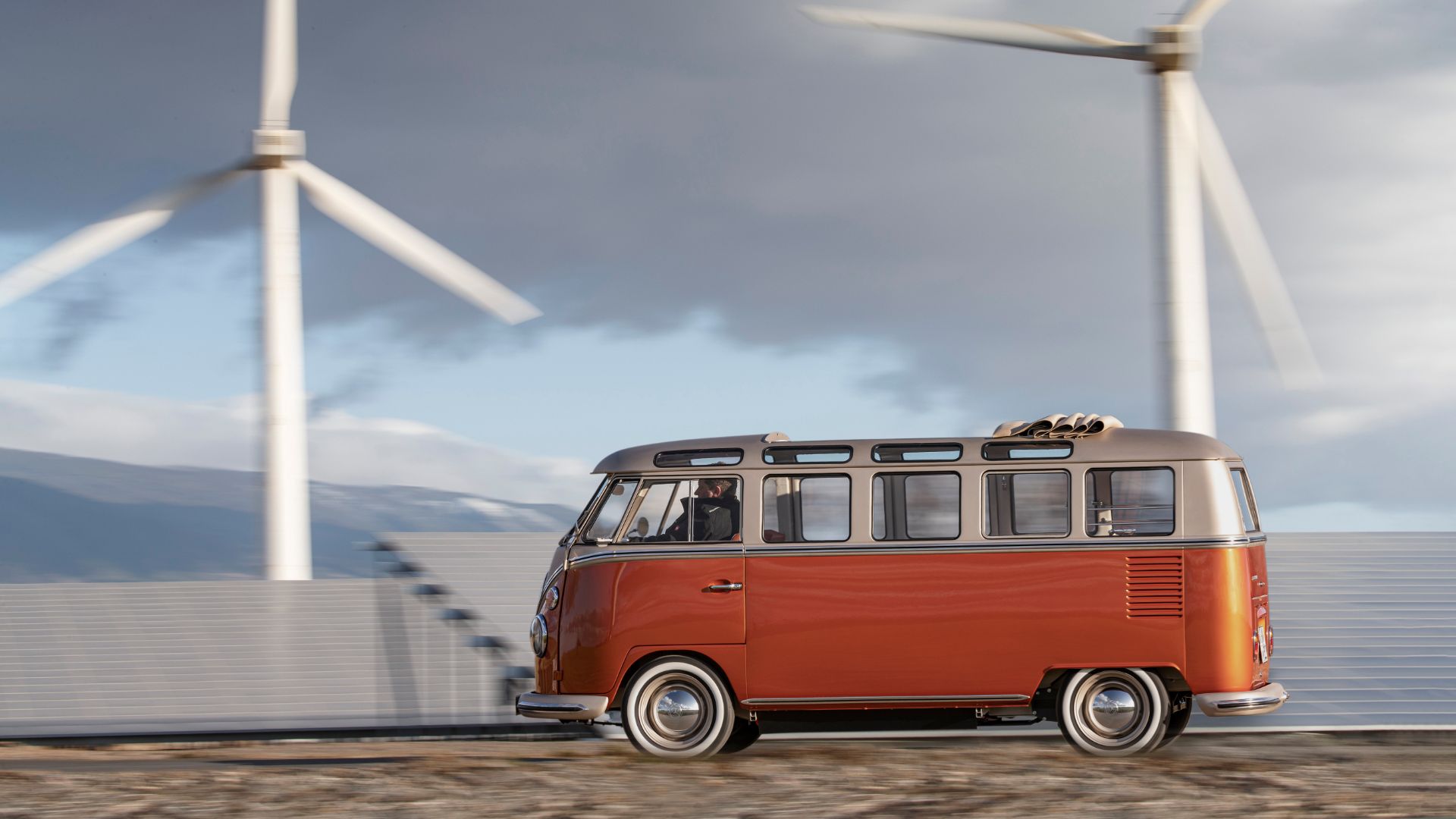 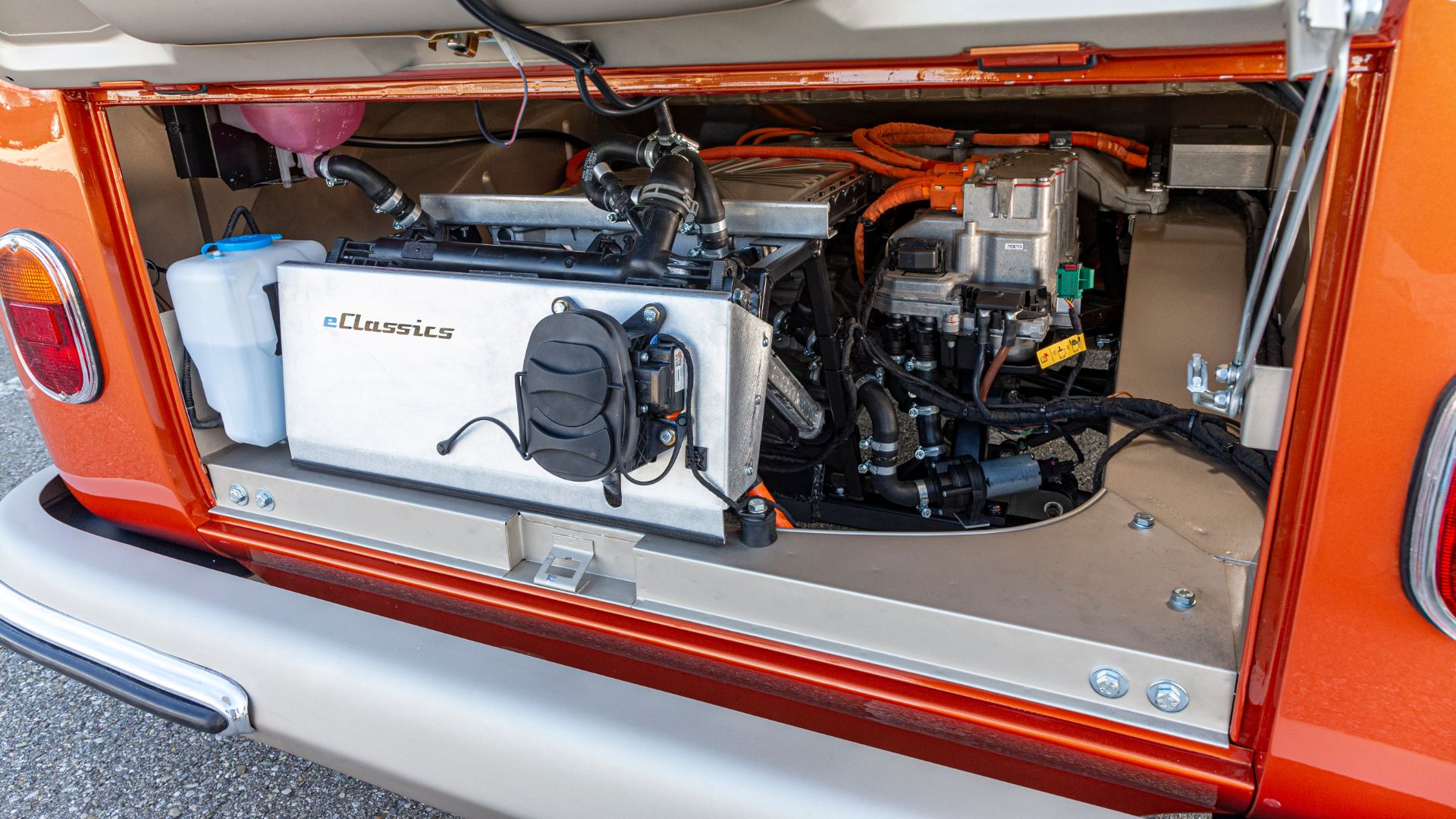 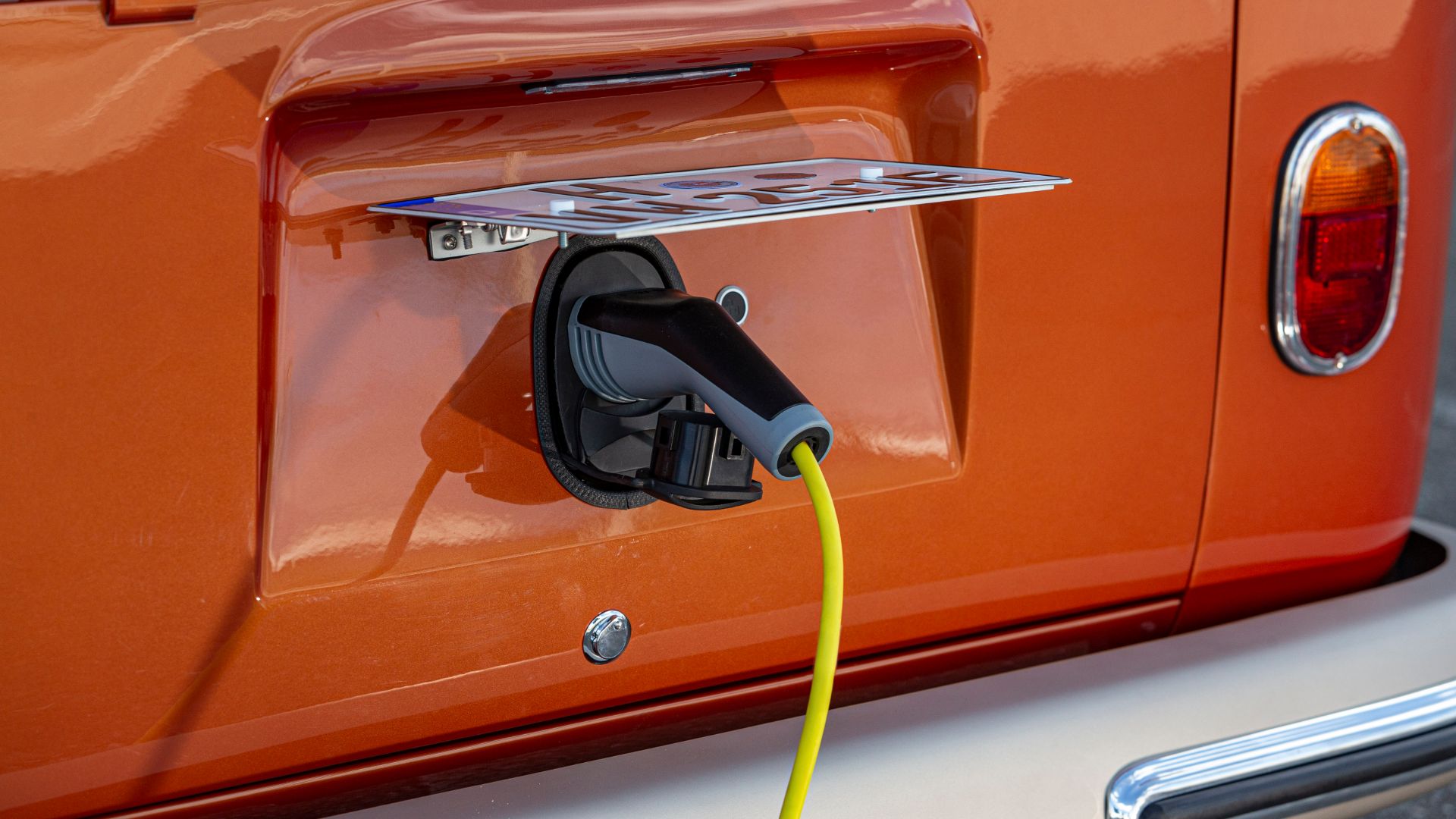 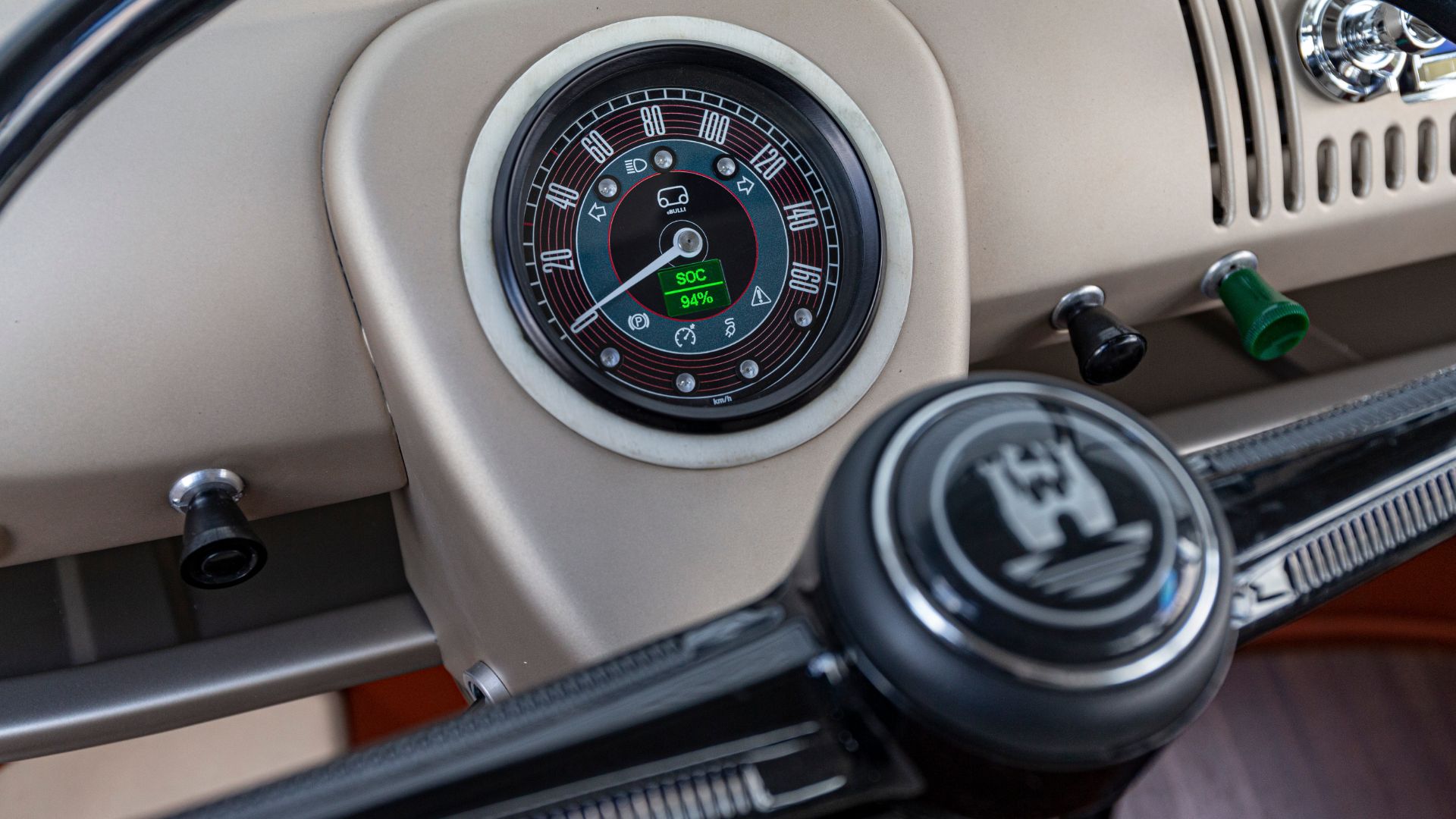 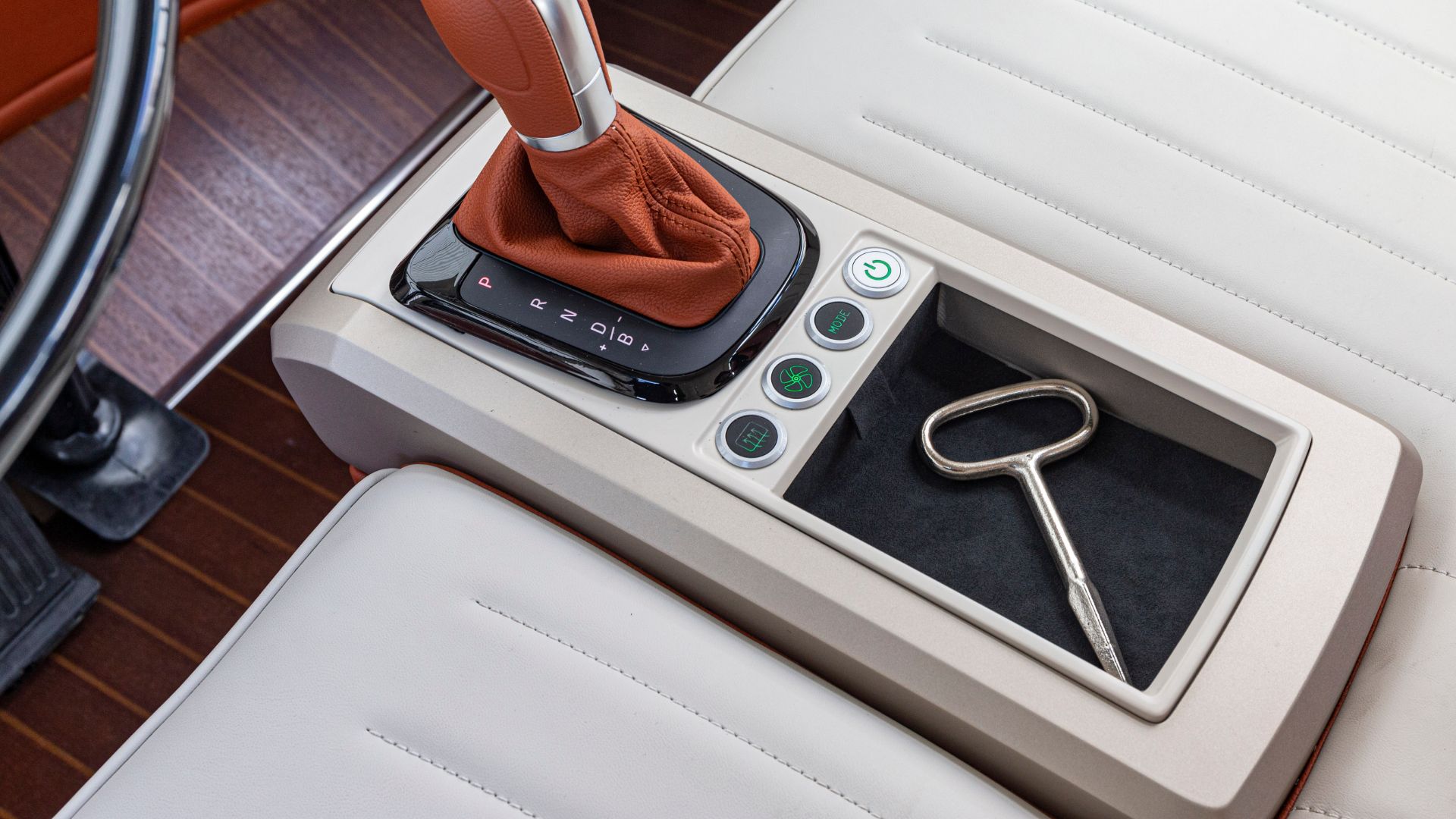 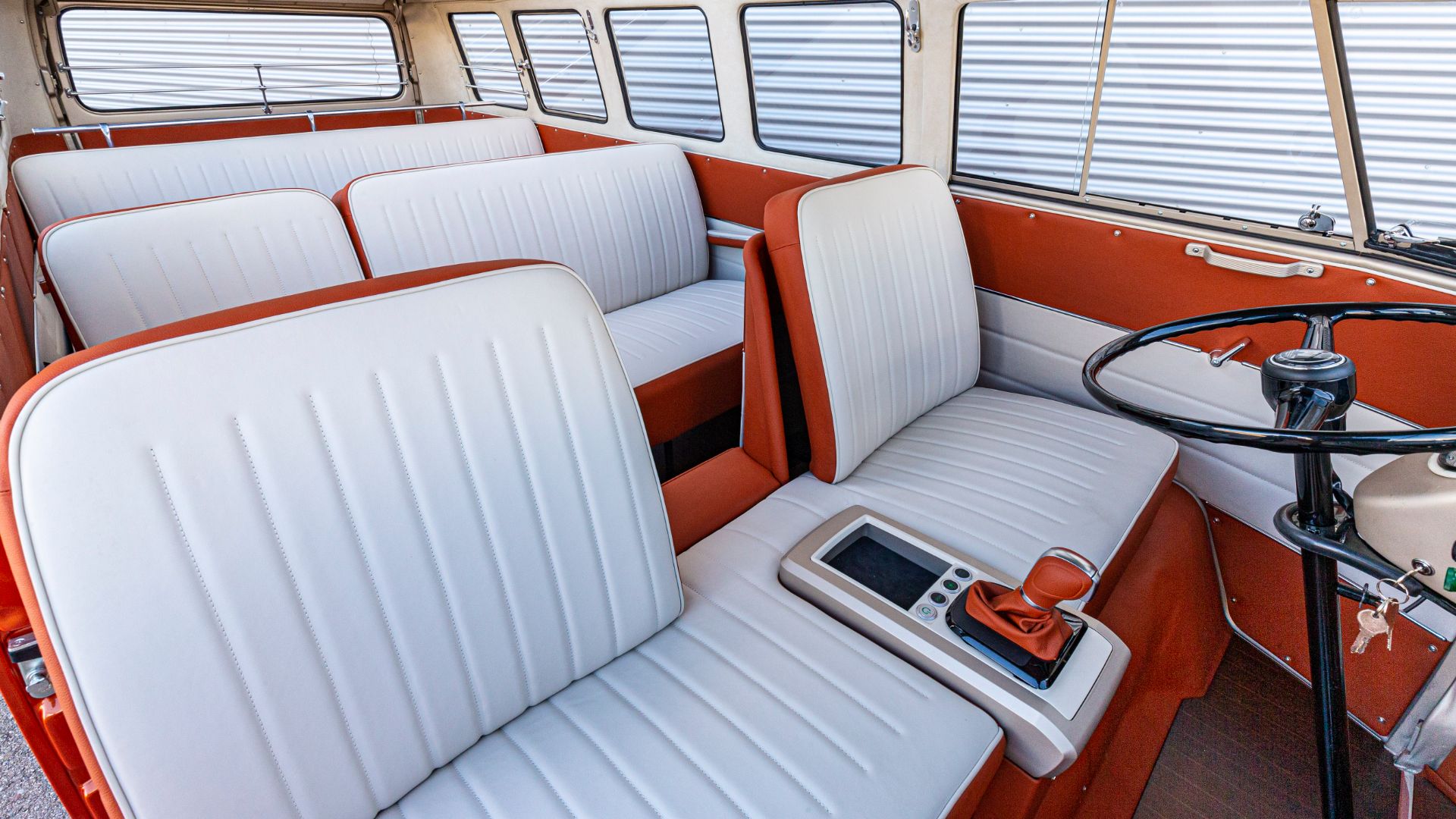 We like it too, but it will cost you. A T1 conversion from eClassics will set you back more than £58,000. T2 and T3 campers can also be converted, and conversion kits can be sent to qualified dealers for the work.