Our man is invited to take part in the 2019 WLTP Challenge in an Alfa Romeo Giulia Quadrifoglio. It's fair to say he found the experience rather frustrating. 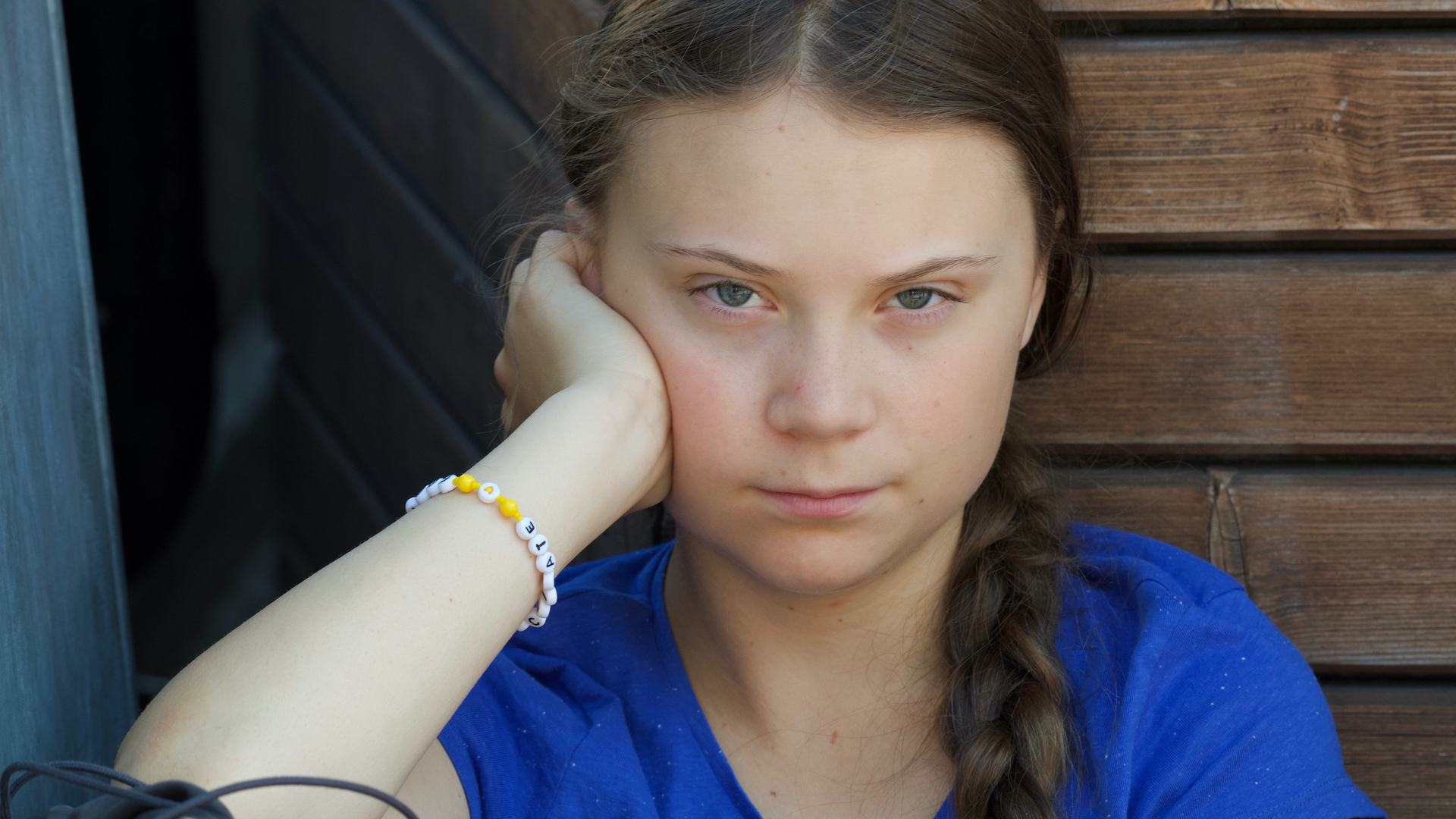 I might be the first person on earth to take any notice of the Alfa Romeo Giulia Quadrifoglio’s fuel economy figure. It’s an irrelevance. As meaningful as an energy efficiency sticker on an American-style fridge freezer.

The hot Alfa’s performance figures are far cooler. Top speed: 191mph. Zero to 62mph: 3.9 seconds. Horsepower: 510 at 6,500rpm. Torque: 442lb ft at 2,500rpm. Numbers that once upon a time would have been strong enough to elevate a supercar to bedroom wall poster status.

The figures look great on paper, but reports suggest that they’re even better when translated to asphalt. I’ve never had the pleasure. The Giulia Quadrifoglio remained on the bucket list, sandwiched between dinner with Keeley Hawes and tackling Route 66 in an AMC Eagle.

I’ve waited a very long time to drive one of these.
I don’t think I’ll be testing it to its limits… pic.twitter.com/719Zdm5AG3

I can tick one of those off the list. I haven’t left the country and Keeley won’t return my calls, so that leaves the Giulia Quadrifoglio. A chance to see what all the fuss is about. Where should I go? The Brecon Beacons? Scotland? The Yorkshire Dales? Nope, a business park in Bristol was my destination, within earshot of the M4 and a stone’s throw from Screwfix. Great.

The Alfa was one of 21 cars taking part in the inaugural WLTP Challenge: a driving event designed to prove the effectiveness of the new standardised fuel economy test procedure. In theory, WLTP should be more reflective of real-world driving conditions, rather than the old NEDC figures, which were about as truthful as a party political broadcast.

In the sterile surroundings of a car park in Bristol, the Alfa stood out like a pimple on an adolescent’s face, and not just because of its Competizione Red paint. The other vehicles were, for the most part, designed to be driven by people who nod in agreement to callers to the Jeremy Vine show and live out their days eating carrot cake in garden centre cafes. 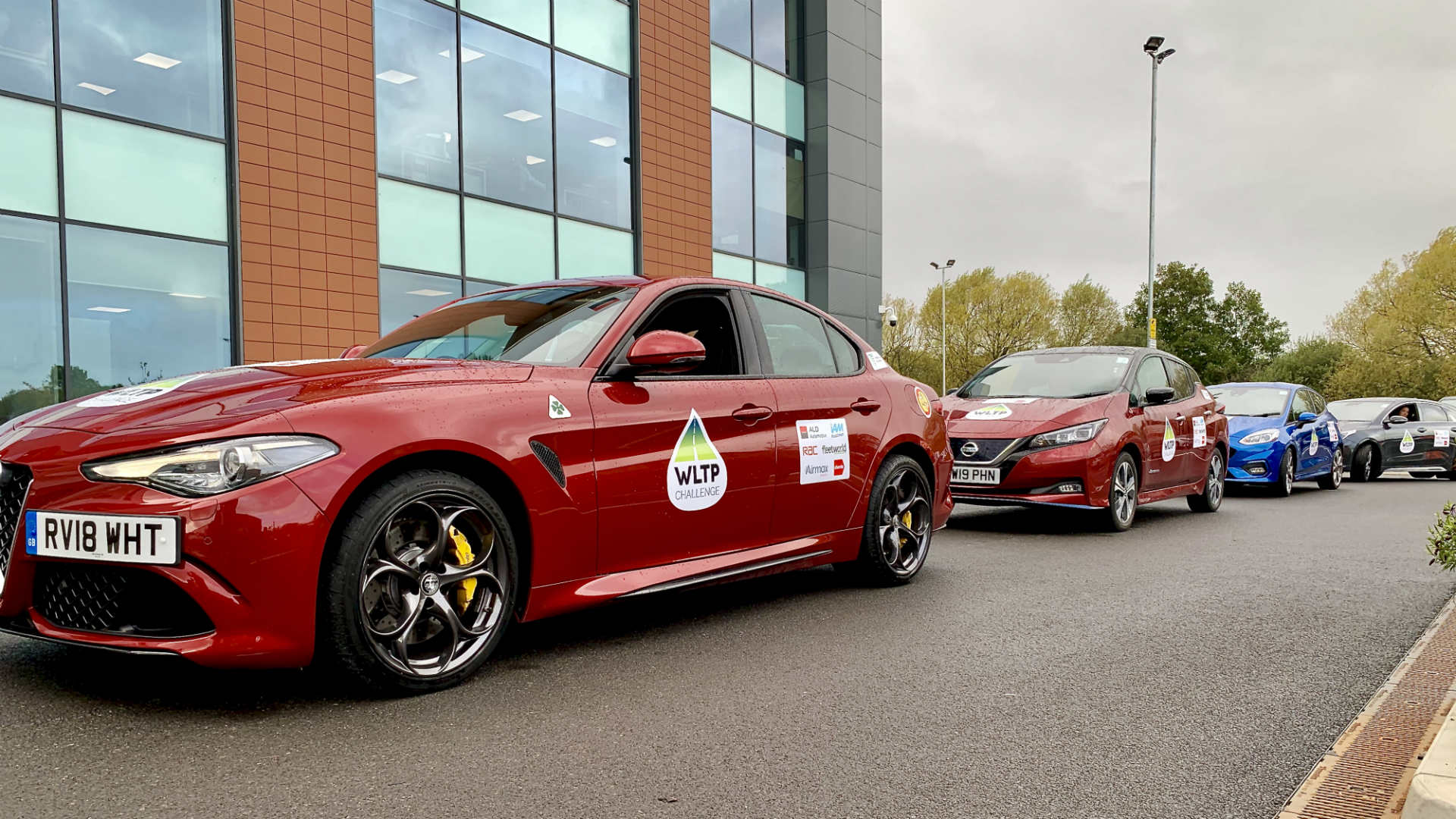 It’s at this point that I should tell you that the Giulia Quadrifoglio has a WLTP figure of 27.2mpg, with CO2 emissions of 206g/km. Not too shabby for a four-door saloon powered by a Ferrari-derived 2.9-litre twin-turbocharged engine. The mission was to meet or exceed that figure over a 220-mile route designed to ‘simulate a typical journey for an employee driving on company business’.

This meant a visit to a Starbucks, lunch at an office block in the West Midlands, a visit to one of those sex shops on the A1, and half an hour in a layby to watch the highlights of the En-ger-land match on YouTube. I skipped the last two, primarily because I may have made them up.

The organisers were at pains to point out that the cars should be driven ‘in a normal way’ to reflect real-world motoring. Looking back, this should have been my invitation to drive the Alfa in the manner a 510hp real-wheel-drive manic saloon should be driven, but fearing for my next freelance commission, I towed the line. 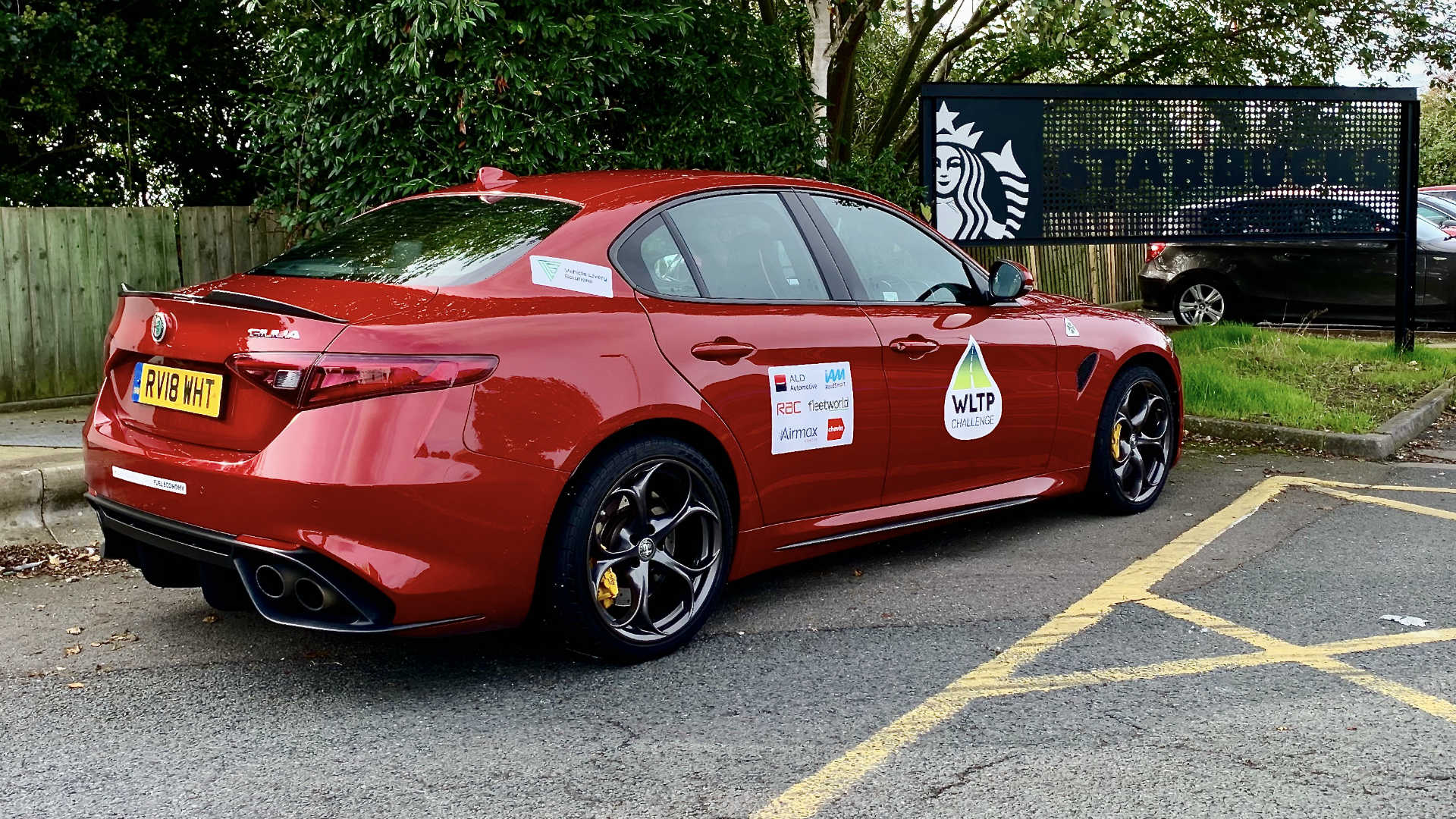 What followed was an incredibly frustrating and at times tedious day behind the wheel. Hypermiling can be rewarding, but not, in turns out, when you’re popping your Giulia cherry. The temptation to ‘go rogue’ was ever present – after all, I might not get another opportunity with the fiery Italian.

Wales looked more appealing than lunch in Walsall, while Castle Combe offered greater riches than a slow crawl through the Cotswolds. But the car was being tracked and monitored by a team of big brothers, so I knew that it wouldn’t be long before I was hunted down by a crack crew of environmentalists and shipped home in the back of a Prius.

Having prepared for an eco drive, I knew what was required to show the electric, hybrid and diesel vehicles a thing or two about sipping fuel. A skinny latte was ordered to save weight, before I killed the air conditioning, left the optional Harman Kardon sound theatre turned off, and switched my right foot to featherlight mode. Time to spank the economy drive, or something.

Momentum is the key. Every time the car stops, you’ll waste precious fuel getting up to speed. Roundabouts and traffic lights require careful consideration if you’re to avoid stopping, while maintaining a safe distance to the car in front is the key to avoiding any unwanted braking.

Tipping its coppola to Extinction Rebellion, the Giulia features a couple of displays designed to get the most out of the tiny 58-litre fuel tank. One is an eco rating, which monitors your acceleration, braking and gear changes to deliver a kind of ‘Greta score’. At one point, this was as high as 91, although it’s mildly amusing that the system awards its own eight-speed automatic transmission the full 100 points. 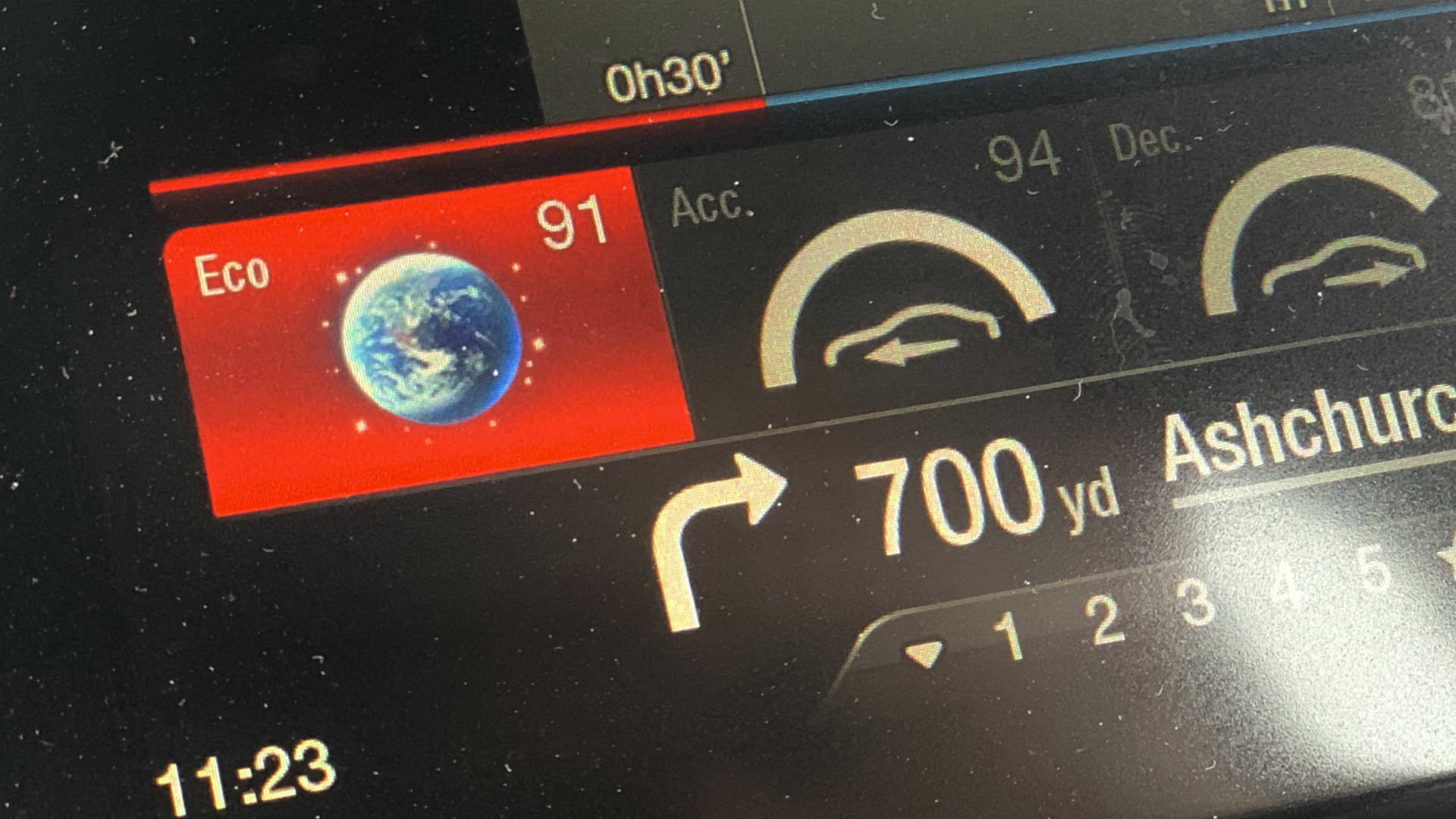 The other is an economy gauge nestled below the dials, which features a sliding scale of fuel consumption. Coast downhill and it shoots to the right; climb a hill and it disappears off to the left.

Hills are the enemy of an eco drive. Twenty miles of hard work can be undone by the slightest incline, sending Greta into a tailspin and putting the nearest petrol station on full alert. Dab the throttle before you climb to give yourself a fighting chance of staying green.

Motorways, on the other hand, are where all your earth dreams come true. Sticking to a steady 60mph saw the Giulia display a rather optimistic 44.1mpg, although this – along with my spirits – dropped as I ventured off the M5 and into the West Midlands. By lunchtime, I had had my fill of eco driving, and not even a tuna and sweetcorn sandwich could lift the mood. Forget WLTP FTW, this was more like WLTP FML.

The route back to Bristol included tortuous motorway traffic and a drive through the Cotswolds on roads that should feel superb in a Giulia Quadrifoglio. Fast sweeping bends, glorious views, wide roundabout exits and long straights combined to create a natural habit for a rear-wheel-drive saloon. But not today, sonny. Today you must follow a line of traffic behind a WLTP challenger in Honda CR-V hybrid doing a steady 42mph on his way to a remarkable 70.08mpg – around 30mpg more than the claimed figure.

The Alfa’s economy after 223 miles: 36.39mpg, which is, as near as makes no difference, a 34 percent improvement on the WTLP figure. Not bad, especially when you consider that the Quadrifoglio is about as far removed from an eco car as I am from enjoying a caesar salad with Ms. Hawes.

But is a 34 percent upshift in economy worth it for all the frustration and torture of being overtaken by a Ford C-Max and tailgated by a Vauxhall Corsa? Of course not. 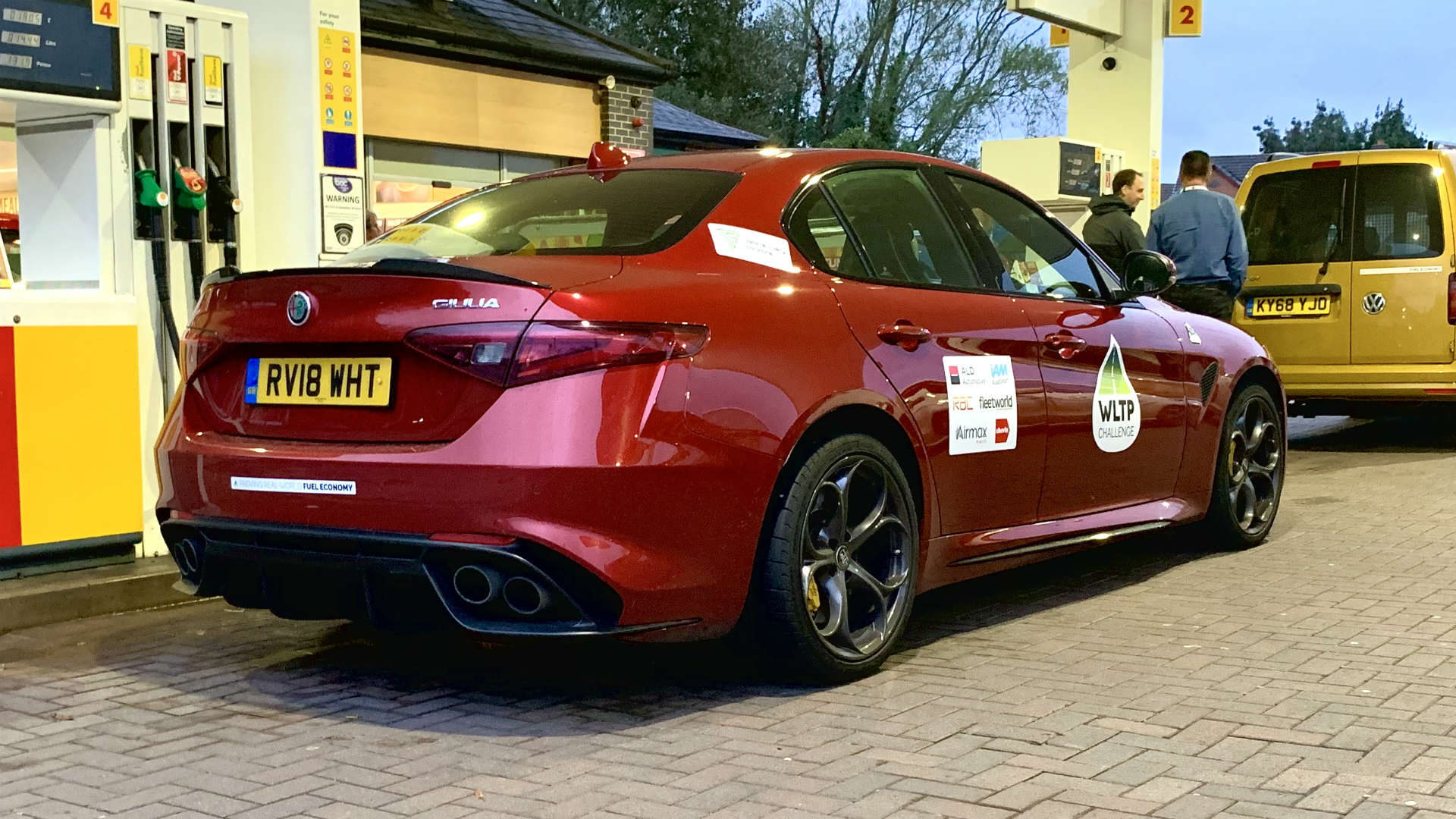 Air conditioning can increase fuel consumption by as much as 10 percent, so it was switched off. But this results in a sweaty back and the need to open the windows at traffic lights, at which point you breathe in all of those delightful toxins being pushed out by the surrounding lorries. A few years off your life to save a few mpgs – no thanks.

And because the future of eco driving means following a CR-V at a steady 42mph, the nation’s company car drivers will be late home for bedtime stories with their children, which will result in arguments with their partners and the breakdown of relationships. The kids need the Gruffalo, so put your foot down, Mr CR-V.

You’d be better off sticking a Giulia Quadrifoglio in the garage for weekends and holidays, and using a Ford Fiesta 1.0 ST-Line for the daily commute. A chap managed to achieve 56.6mpg on the WLTP Challenge, in a car that’s fun to drive, cheap to buy and, on this evidence, cheap to run.

I can’t tell you a great deal about the Giulia Quadrifoglio, aside from the fact that the superb £3,250 Sparco bucket seats are worth every penny, the infotainment system is painfully poor and the ride comfort is great at 56mph. The car also turns more heads than halitosis.

The problem is, I was so preoccupied with whether or not you can drive a Giulia Quadrifoglio with restraint, I didn’t stop to think if I should. It’s a dinosaur in an age of electrification, but I’d urge you to enjoy cars like the Alfa while you still can. The car deserves more than to be restrained like a tiger on a leash.

Drive it like you’ve stolen the last gallon of fuel. Sorry, Greta.

New data has revealed that one in four motorists have damaged their car on a pothole or speed bump. That rises to 30 percent for people in urban areas
Read more

Celebrating the Mini’s swinging 60th with a tour of London

We take the Mini back to the city that made it famous. Here’s why, 60 years on, it remains a legend
Read more

Buying your car insurance three weeks ahead of the renewal date could save you as much as £567 a year, research reveals
Read more