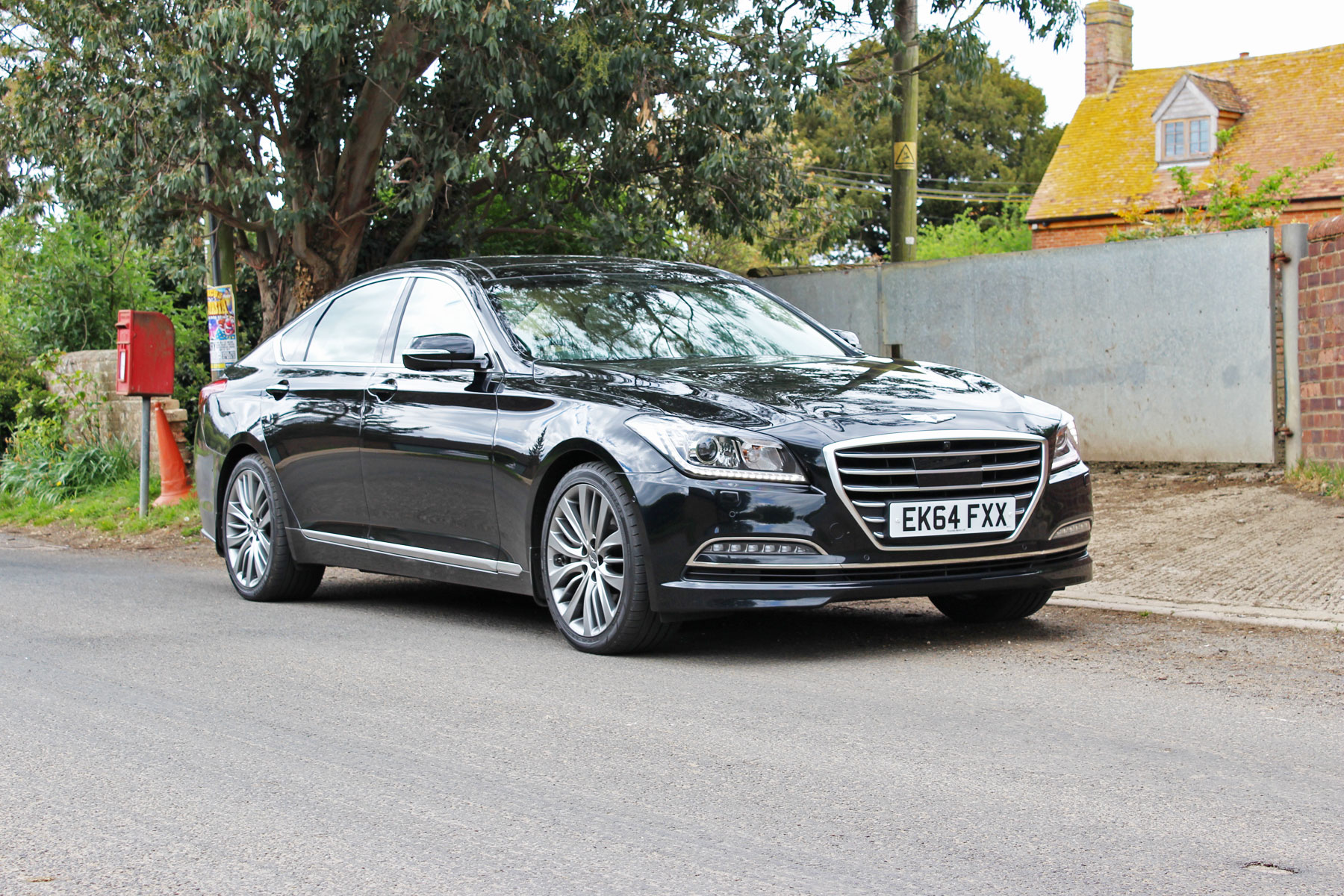 Hyundai’s new super-saloon holds strong appeal, but you’d be mad if you spent your own money on one.

Whichever way you look at it, that’s a sizeable wad of cash. You could get a fully loaded Santa Fe Premium and an i10 for that amount of money and still walk away with some change. And we won’t mention the fact that the Genesis costs $38,000 in the US, the equivalent of £25,000 in the UK.

But then the price is almost irrelevant. As Hyundai readily admits, the Genesis may struggle to find even a few hundred homes. Instead, think of the Genesis as one giant 3.8-litre business card. In more ways than one, the Genesis is Hyundai’s S-Class. What you see on the Genesis today, you can expect to find on the likes of the i20 and i30 tomorrow. Well, maybe not the 3.8-litre engine and rear-wheel drive.

It’s therefore curious to find that the Genesis wears surprisingly few Hyundai badges. There are a couple of references on the boot lid, but on the door sills, steering wheel, bonnet and centre caps, it’s all about the Genesis. It’s a nice enough badge, almost Aston Martin or Bentley in style, but shouldn’t a giant advertisement make more references to the brand it’s promoting?

At 4,990mm in length and 1,890mm wide, it fits somewhere between a 5 or 7 Series in terms of size, which means it’s a formidable thing to chuck along a British B-road or through a quaint Buckinghamshire village. Make no mistake, you will get noticed. The Hyundai Genesis turns heads with the best of them.

Our test car turned out to be owned by the president of Hyundai UK, who had the sense to spec it in gangster-style Onyx Black. Other colours are available, but you won’t be able to do a passable impression of a Korean Jason Statham in those. So you should stick with black. Oh, and don’t get carried away with the options list, because – aside from the choice of seven exterior colours and three interior trims – there isn’t one. Hyundai has taken an American-style all-you-can-eat-buffet approach to the specification.

It would be easier to list the things the Genesis doesn’t have. You name it, the Genesis has probably got it. Hyundai is keen to showcase the safety features, such as the active bonnet, lane keeping assist, emergency brake assist, around view monitor and blind spot detection. Naturally, the car is covered by Hyundai’s five-year warranty. Although that doesn’t cover you against sudden and rapid depreciation… 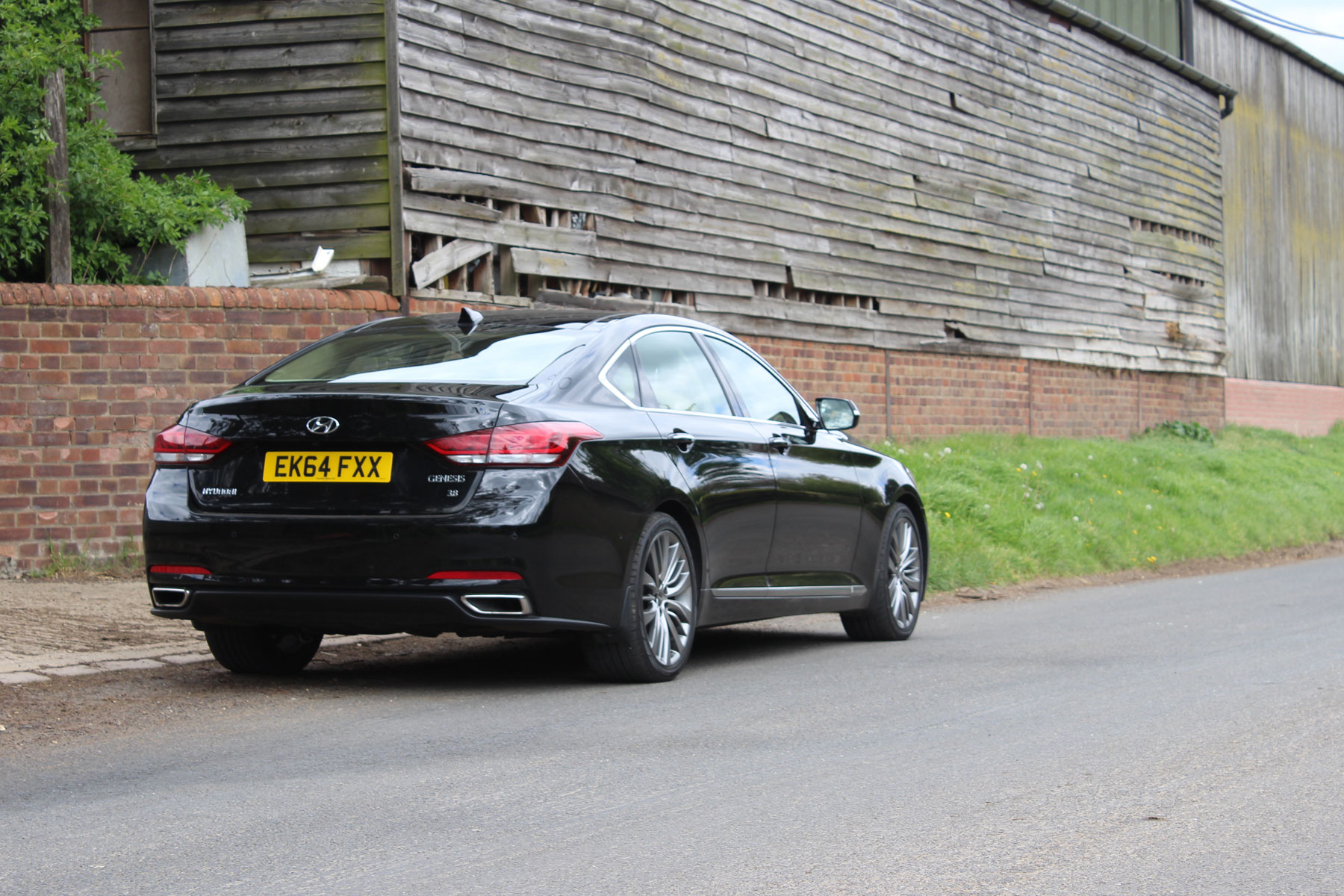 Pretty much as you’d expect a barge-like Hyundai to drive. Once you’ve stopped grinning from ear-to-ear at the sheer grandeur of the thing (obscure Hyundai reference there), you step over the Genesis-inscribed sills and settle down behind the wheel. Press the start button and the electric seat and steering wheel automatically adjust to your favoured position. The car then plays an annoying Intel-style jingle as the V6 roars into life.

Slip the leather lever into Drive, press the gas pedal and the electric parking brake releases, allowing you to slip elegantly away. At first it’s rather quiet, with only a gentle hum emanating from the V6 engine. In fact, the loudest sound is that of the car park gravel being crunched beneath the 19-inch rims. The ambience is one of pure luxury car, to the point where you can even hear your hands fidgeting around the leather steering wheel. Insert clichéd ‘still want that S-Class’ question here.

The shifts up and down through the eight gears are smooth and almost unnoticeable. You can choose to use the steering wheel-mounted paddles and again, the changes are wonderfully smooth. In fact, you could probably drive the Genesis all day and discover it would never break into sweat.

Of course, the temptation to press the loud pedal is ever-present when you’re at the wheel of a V6-engined rear-wheel drive saloon, so as soon as we were out of earshot, we did the right thing. Tyres screeching away from a junction (sorry, Mr President) and with the 3.8-litre engine playing beautiful tunes out of the twin exhausts, the Genesis lived up to its 0-62 sprint time in, ooh, 6.5 seconds. But had we discovered a new performance hero?

Er, no. While it makes all the right noises and feels very well balanced, you’re under the constant impression that the Genesis would prefer to waft than to entertain. If you’ll excuse the inevitable reference to Messrs Gabriel, Rutherford and Collins, it’s more power ballad than prog-rock. Hey, we did manage to get to paragraph 12 before mentioning Richard Hammond’s favourite band.

Even with the driving mode set to sport, the air suspension wants to cushion you. There’s virtually no feeling of being connected to the road, either through the supremely comfortable leather seats, the steering wheel or the throttle pedal. For a while it’s a lot of fun hurtling down a B-road, resisting the temptation to do your best impression of The Stath. But after an hour or two the novelty would definitely wear off.

And it’s not as though the ride is perfect, either. The Genesis is easily unsettled and the vague steering can make road positioning a bit of a lottery. Which isn’t great when you’re at the wheel of something this large. Instead, you’re better off settling back into the armchair-like comfort of the Genesis, choosing between electronically-cooled or heated seats, turning on the heated steering wheel and listening to Magic FM.

Can the Hyundai Genesis justify its hefty price tag? 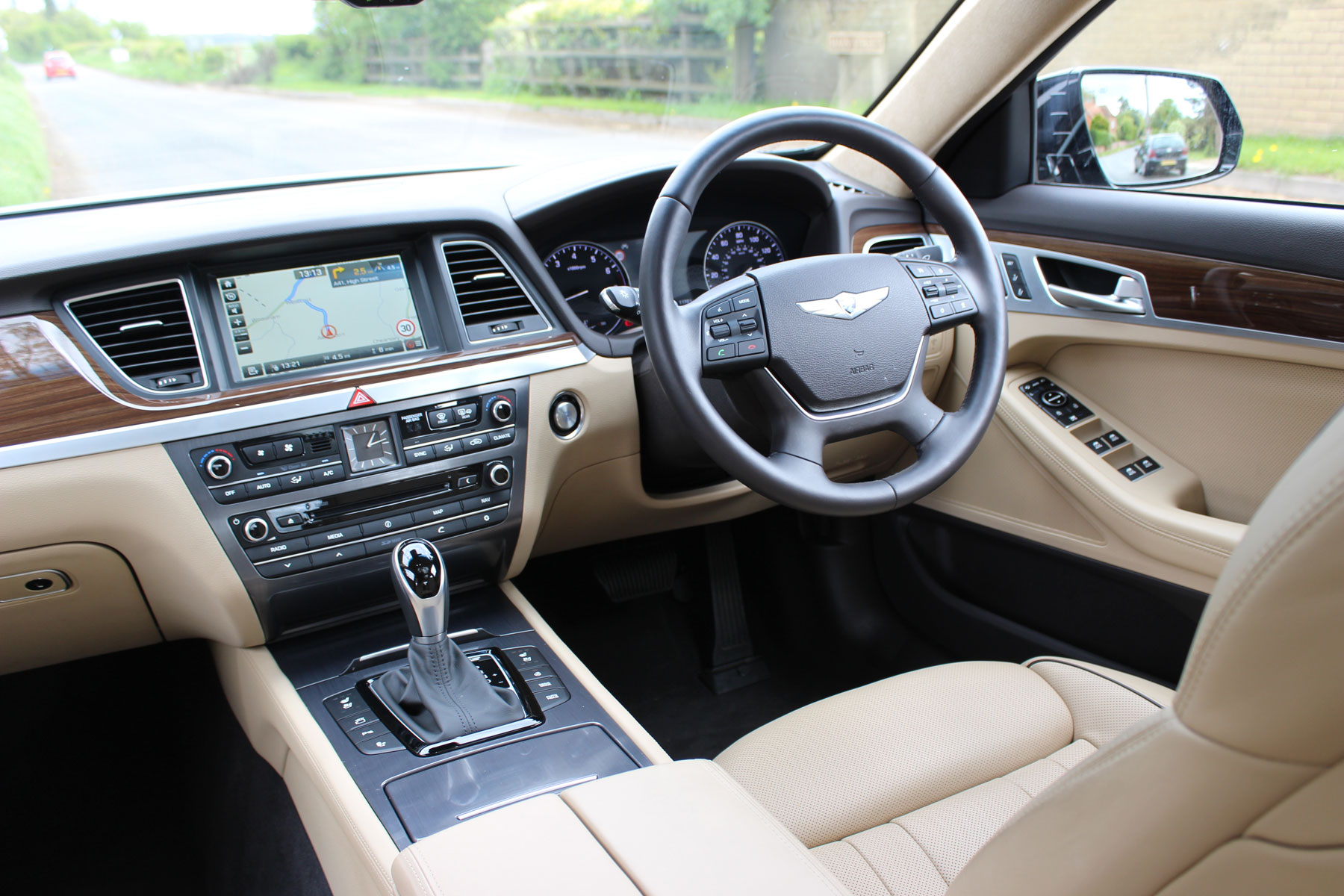 Of course it can’t. It sticks out like a sore thumb on the Hyundai website and most people will think the price is a misprint. But is the price a reason to dismiss the Hyundai Genesis as an expensive folly? Not at all. Think of it more as a glimpse into Hyundai’s future. The price is essentially meaningless and totally irrelevant. To Hyundai, the Genesis is a non-executive director, wheeled in to sprinkle some magic over the board.

Judged on that criteria, the Genesis is a credible and immensely likeable machine. Aside from some minor details, such as the choice of plastic on the centre of the steering wheel and top of the steering column, the interior quality is first rate. The doors shut with a reassuring thud, everything is well finished and it’s refreshing to find Hyundai has resisted the temptation to put all the controls on the 8-inch touchscreen. In fact, the four control knobs on the centre stack have a premium feel to them, something you’d never get with a touchscreen.

The full-length sunroof does encroach on the amount of headroom, but the way in which the sunroof and rear window blind open and close will please those with Alan Partridge-levels of appreciation for such things. Tiny details matter, right? We could argue the analogue clock feels like a bit of an afterthought and the touchscreen display looks a bit dated, but we’d be nitpicking.

Not that you can nitpick about the running costs. After a morning of what we suspect was enthusiastic driving at the hands of some journalists, the fuel gauge was reading just below a quarter full. Hyundai claims the Genesis will return 25.2mpg on a combined cycle, so bank on something closer to 20mpg. Then there’s the CO2 emissions. A figure of 261g/km puts it in band M. That’ll be £1,100 for the first year, followed by £505 for each year after. Ouch. 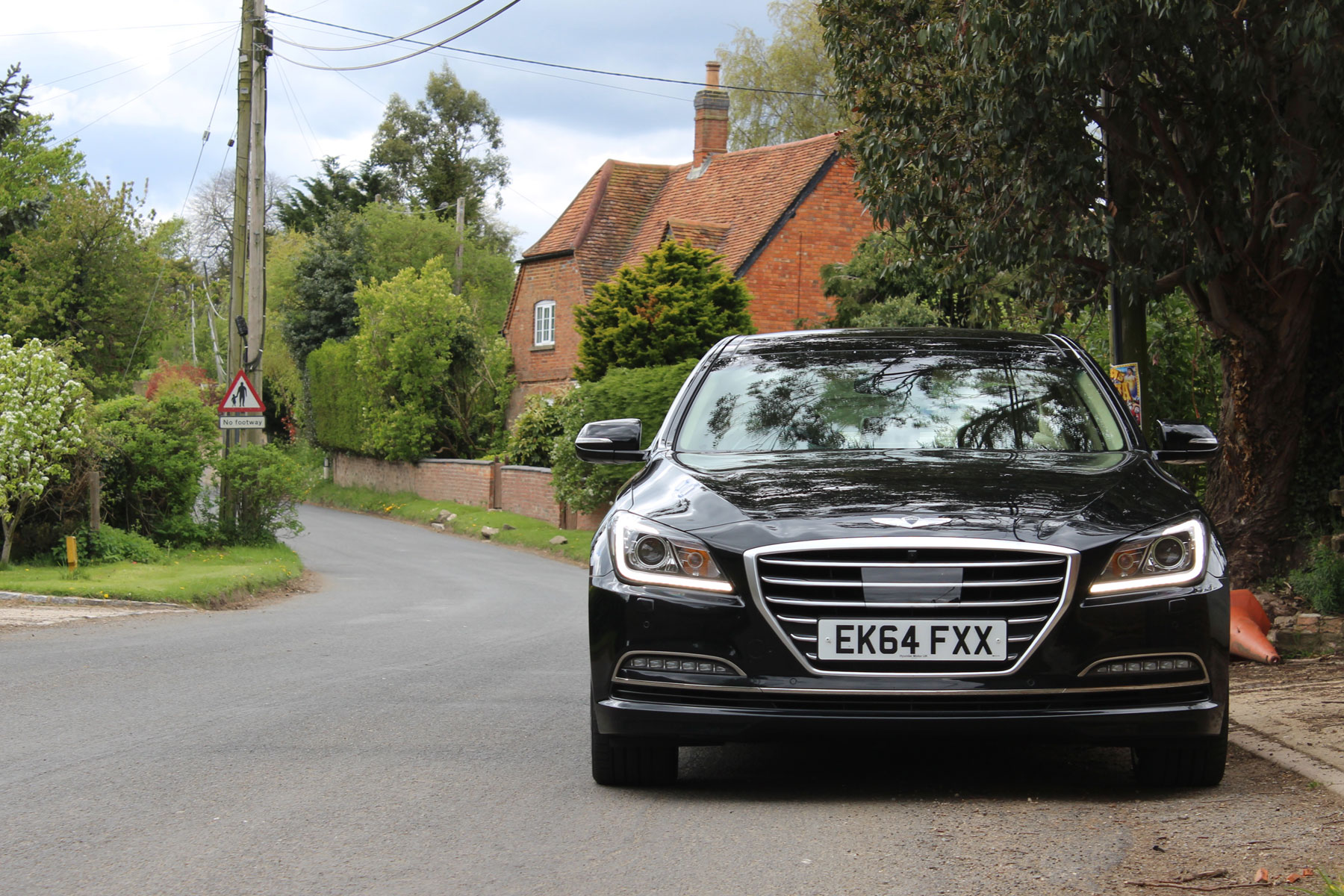 So what would we pay for the Hyundai Genesis? It’s a throwaway question, because Hyundai is being totally honest about its intentions for this car, but it’s an important consideration. Our gut instinct is £30,000, maybe £35,000. At that price it pitches it against a top-spec Skoda Superb and an entry-level BMW 5-Series. In both cases, the Genesis could hold its own as an interesting alternative. Let’s be honest, it’s a handsome looking machine.

Sadly, the spectre of depreciation will be forever hanging over the Genesis owner. Remember the Hyundai Grandeur? Of course you don’t, but in 2006 you could buy one for £27,000. Few people did and nobody really wants to own a secondhand one. The game has moved on considerably since the Grandeur and the Genesis sits in a different league. But large saloons from the Far East don’t have a good track record for rock-solid residuals here in the UK.

But let’s not start and end with the elephant in the room. Be glad the Hyundai Genesis is here. With the demise of the Chrysler 300C, it’s the only car for you if you want four doors, rear-wheel drive, a big petrol engine and a overwhelming sense of Americana. And you’ll even get a supersize five-year warranty. Do you want fries with that?

Does the Hyundai Genesis actually have any direct rivals in the UK? Probably not. The price is pitched far too high for it to mount a serious challenge to the Germans and even a Skoda Superb would make more sense. Instead, we’d suggest ranking it alongside the Citroen C6, Volkswagen Passat W8 and Volkswagen Phaeton as expensive curios that hold strong appeal, but you’d never want to spend your own money on them.

Automatic emergency call standard on all new cars from 2018