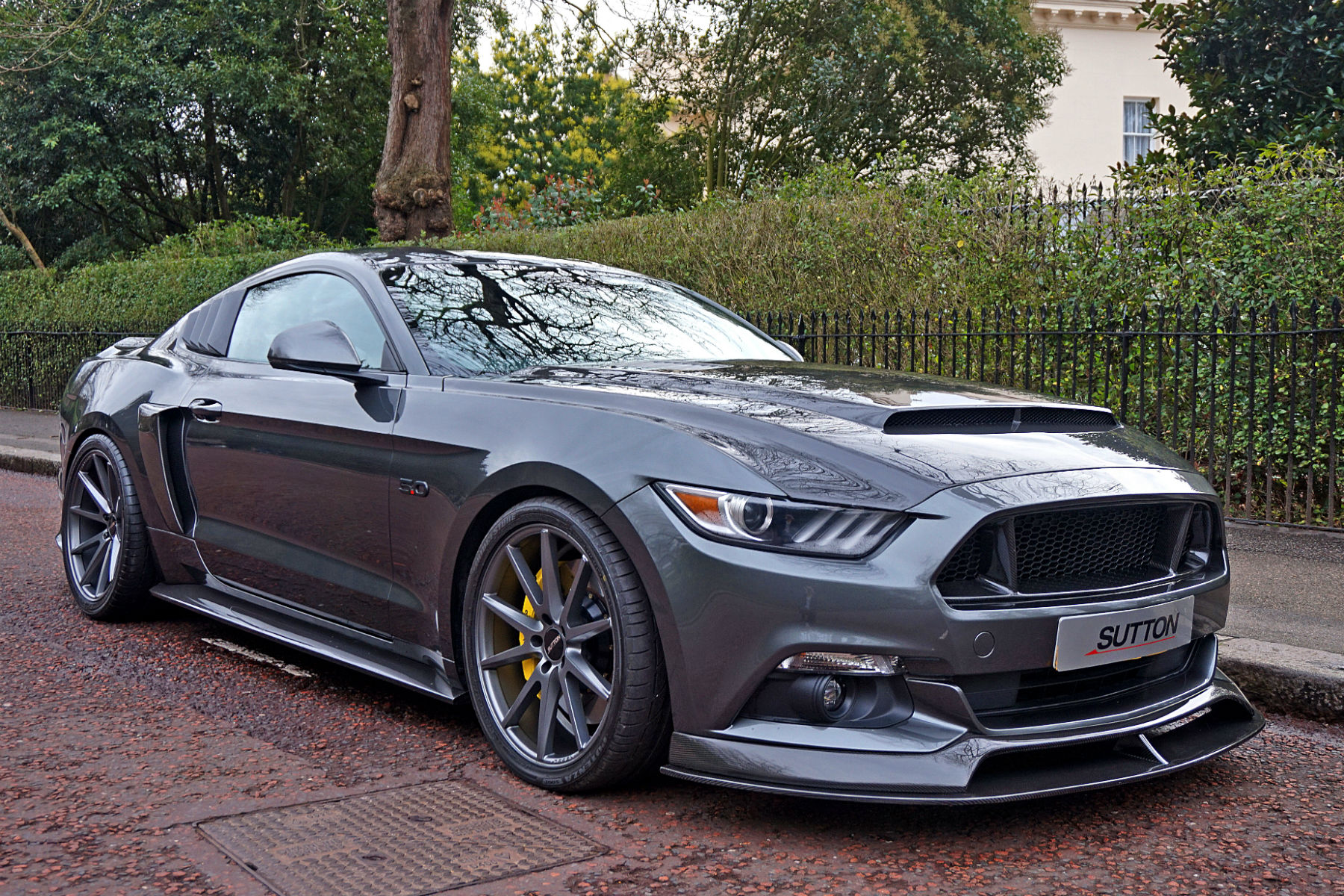 Forget the wildest creations of Cosworth in the UK or Shelby in the US. This fast Ford outguns them all. Yes, even the latest 760hp Shelby Mustang GT500.

The Ford Mustang Sutton CS800 enters the world as a standard Mustang GT coupe (or convertible) with ‘just’ 416hp.

After a visit to London tuning company Clive Sutton, however, it emerges with nearly twice that – a scarcely believable 825hp – catapulting this coupe squarely into supercar territory. Here’s what you need to know.

It has more than 800 horsepower 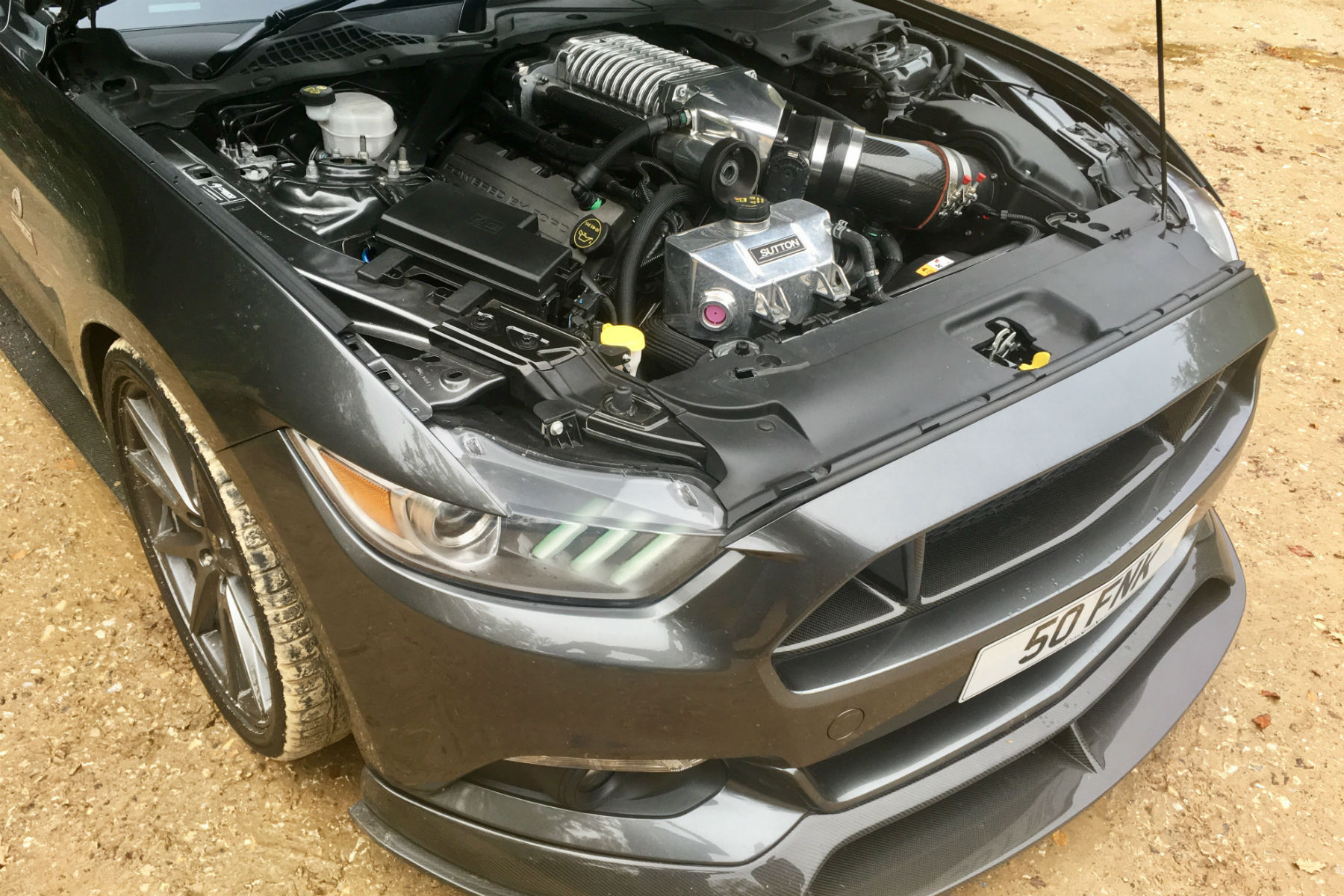 Did we mention the power output? That 825hp is more than plenty of big-league supercars, including the Ferrari 812 Superfast and McLaren 720S. Only true hypercars, such as the LaFerrari or McLaren P1, manage more. When it comes to pub bragging rights, the Sutton Mustang takes some beating.

The main ingredients in this heady brew are a 5.0-litre V8 and a stage-two Whipple supercharger – the latter clearly visible on top of the engine. Combined with high-flow fuel injectors and a larger throttle body, these transform the Mustang from a budget BMW M4-rival into something altogether more serious. 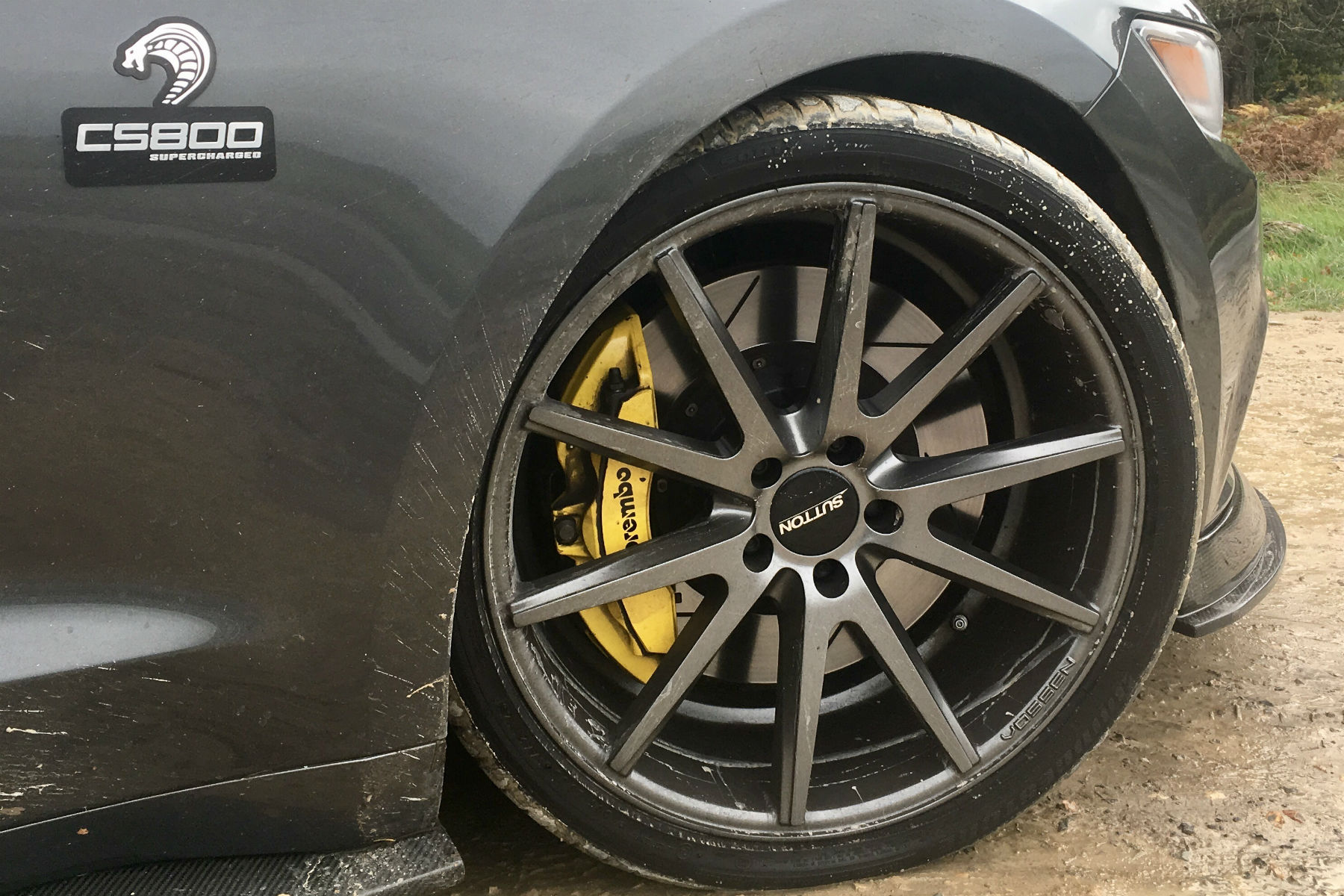 Even in the dry, putting all that power down is clearly an issue; note the 0-60mph time of 3.8 seconds: hardly sluggish, but slower than supercar rivals. Top speed is a claimed 195mph.

Use common sense, however, and this modded Mustang is no knife-edge wild ride. Long gear ratios and a progressive power delivery (one advantage of a supercharger over a turbo) allow swift, safe progress on twisty tarmac.

With stiff suspension and slightly vague steering, the CS800 is no paragon of poise, but nor is it simply an unreconstructed drag racer. 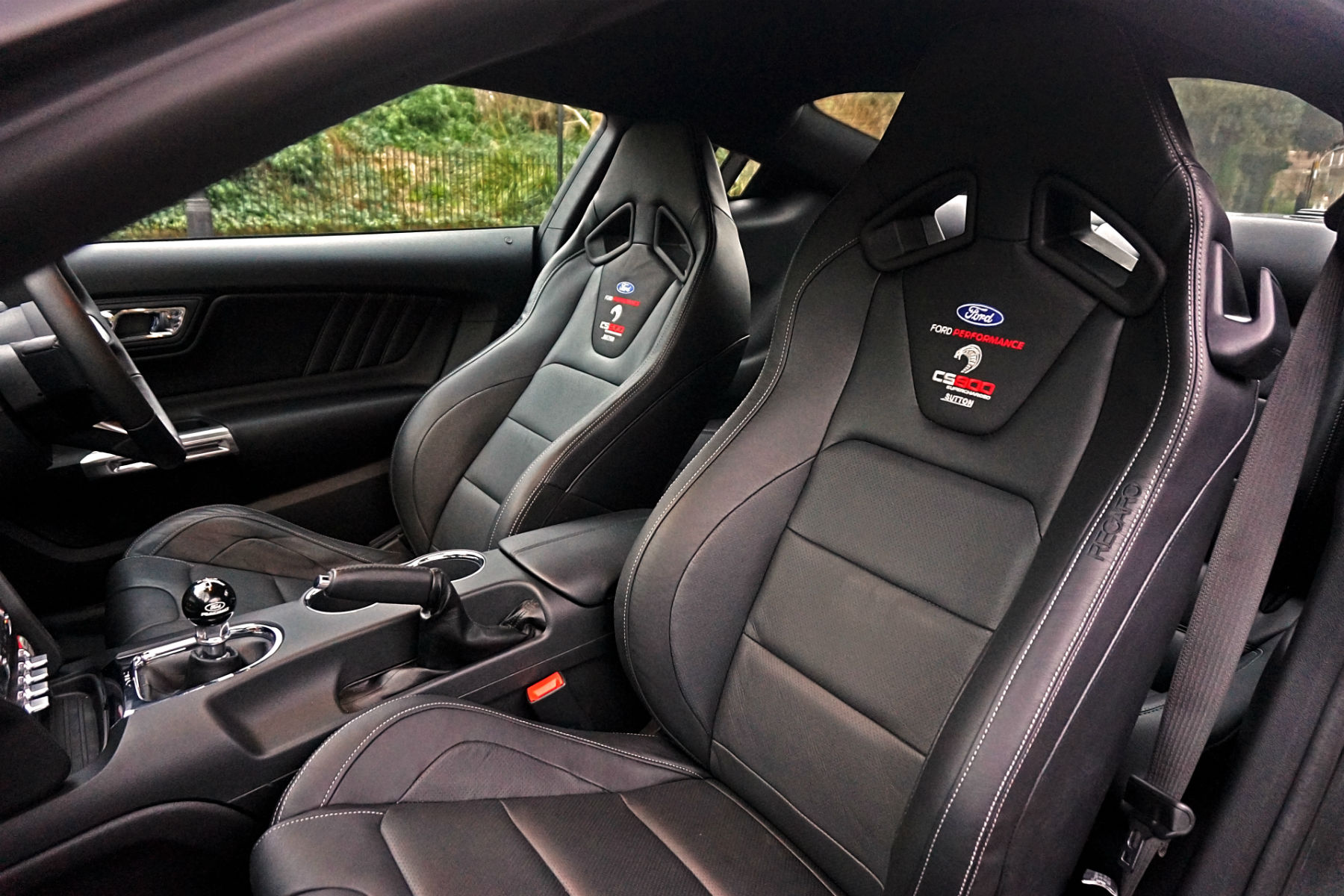 Clive Sutton’s demonstrator was loaded with £35,000 of extras, taking its price just the wrong side of £100,000. Fortunately, most of these options are cosmetic and, frankly, unnecessary. At the time of writing, the ‘basic’ Mustang CS800 costs £66,942.

To put that into perspective, it’s scarcely more than a BMW M4, and around £15,000 cheaper than a Porsche 911 Carrera. Both of those cars are more sophisticated and ultimately more rewarding to drive.

But if you want the maximum number of ponies per pound, there’s no contest.

You can turn up the V8 via your phone 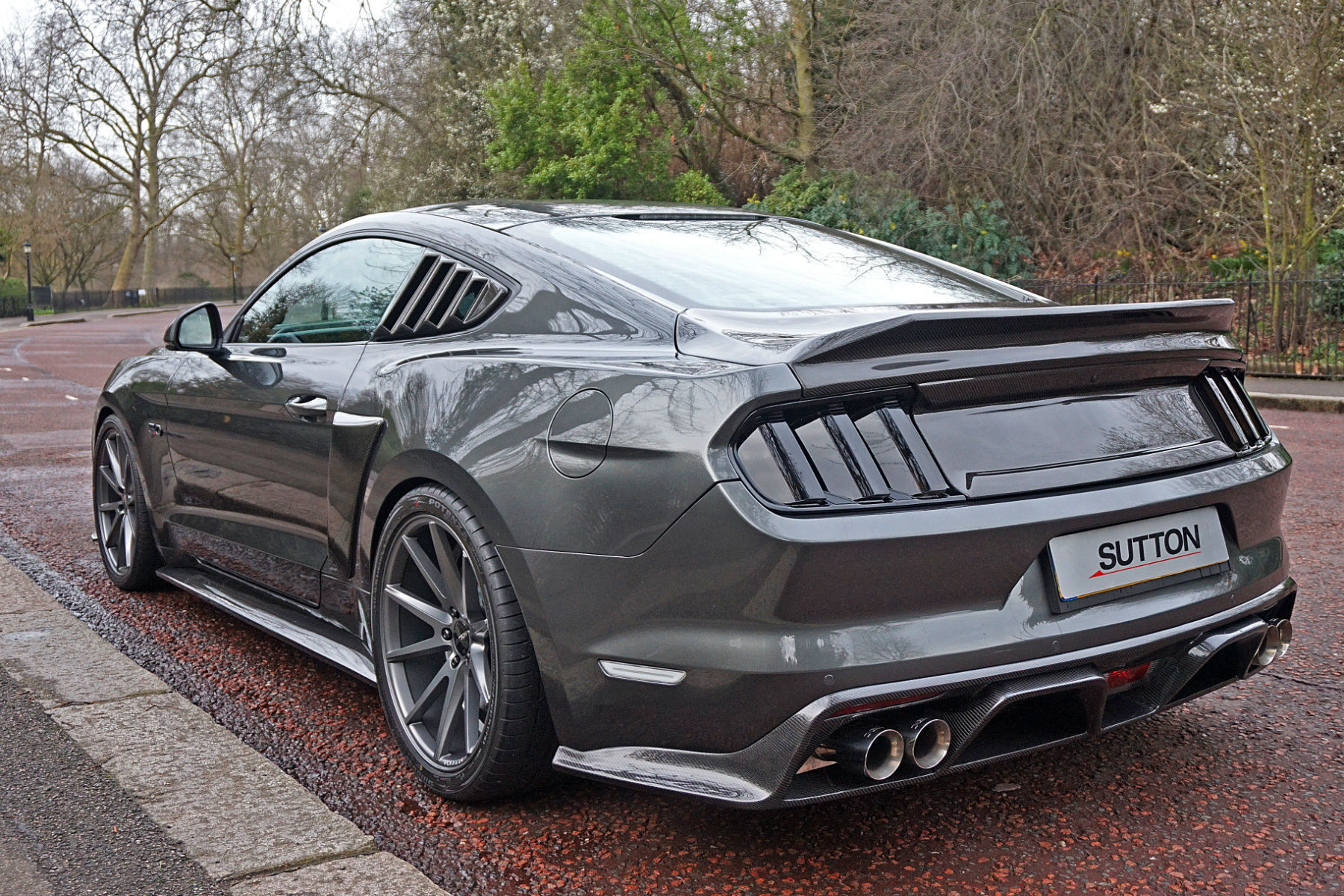 Perhaps the coolest feature on this fully-loaded CS800 is the XForce exhaust. This aftermarket, quad-pipe system isn’t cheap, at around £6,000, but we’d be sorely tempted.

Mustang CS800 is converted by Clive Sutton – importer of American trucks and muscle.

Download the XForce app and you can adjust the volume of the tailpipes via sliders on your phone screen. These can be tweaked according to throttle opening, engine rpm, speed and location, so you can, for example, programme the exhaust baffles to close automatically near your home.

Or indeed the opposite, depending how frosty neighbourly relations are…

Not ALL the options are strictly necessary… 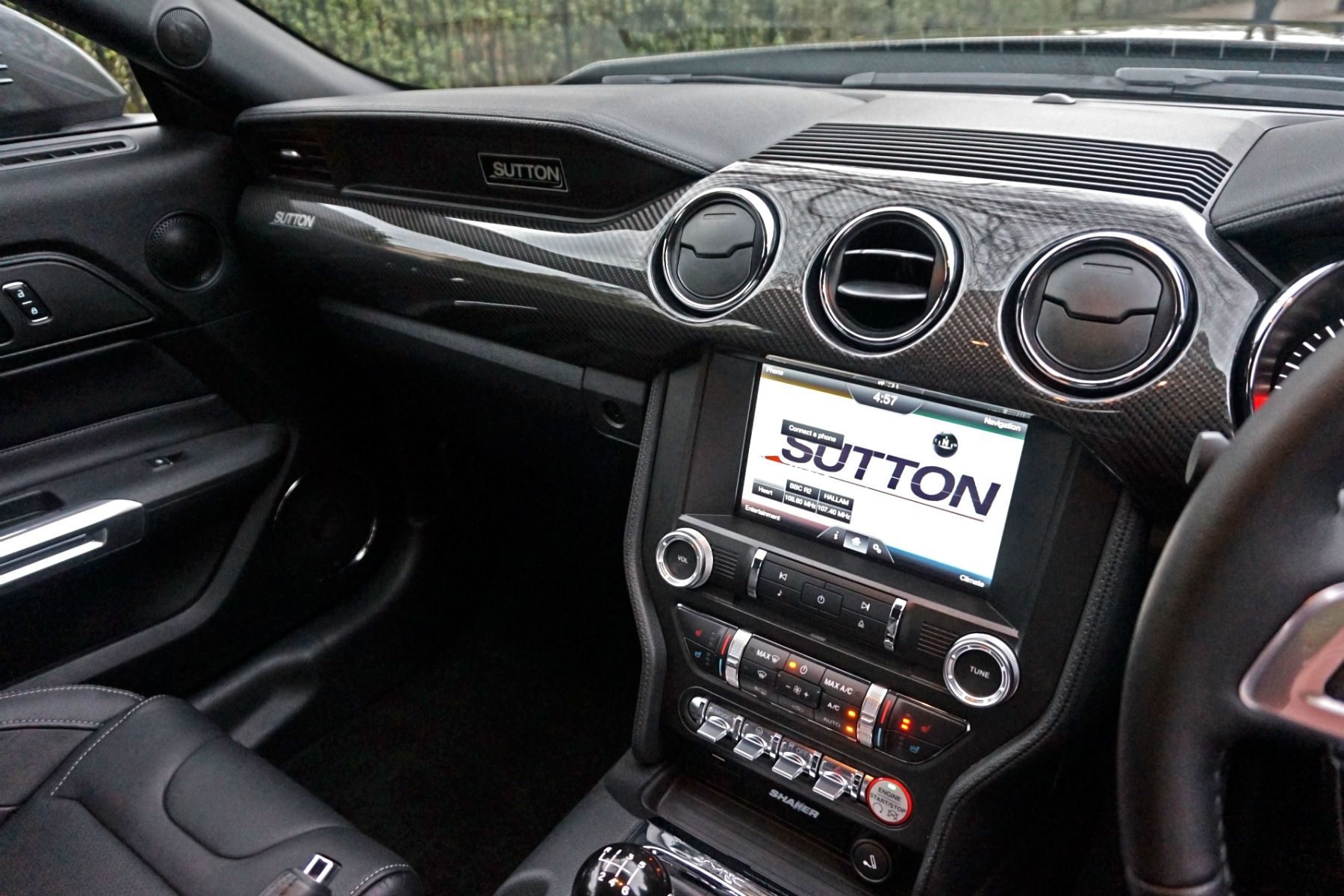 Other people love it – and so will you 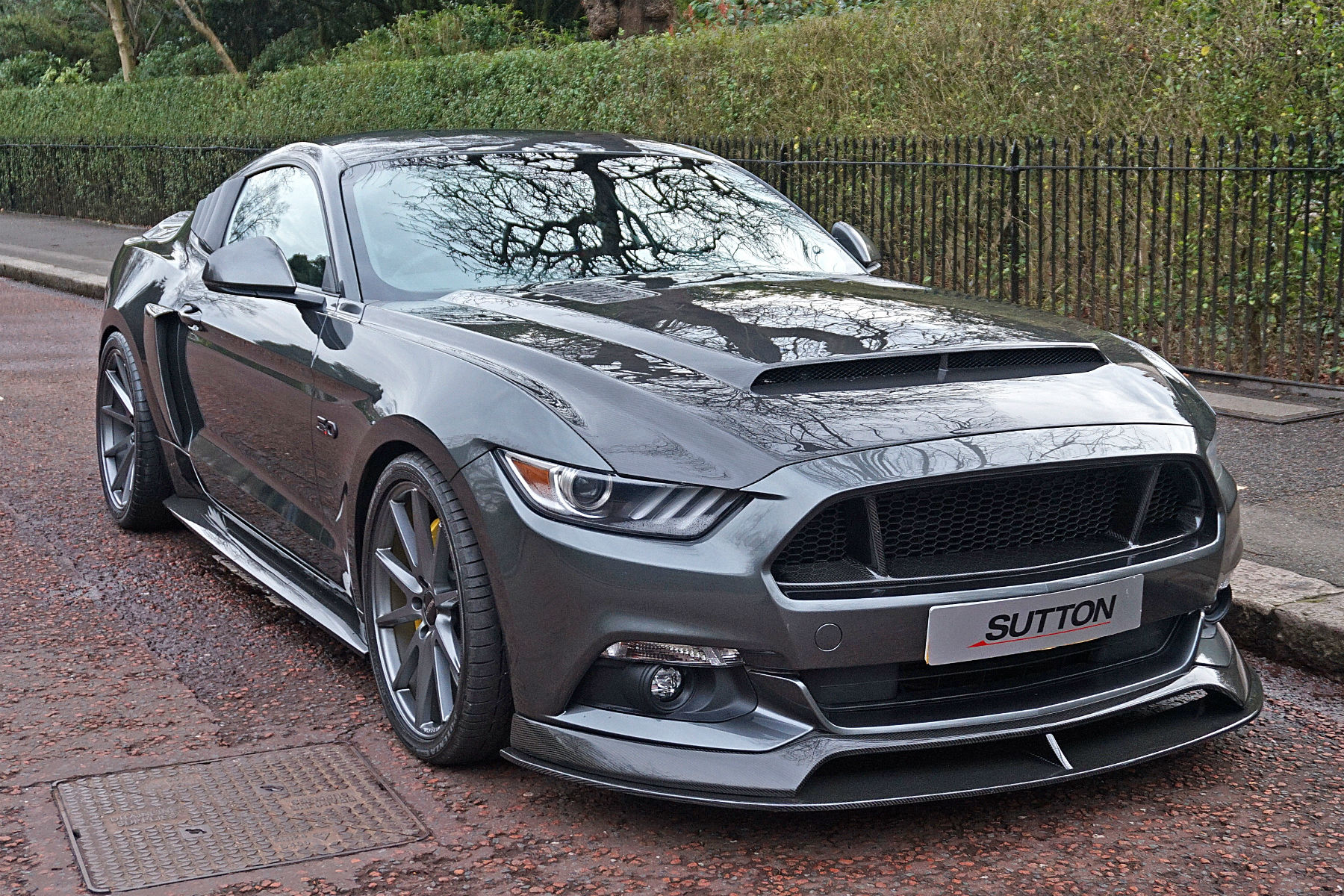 A supercar elicits a wide range of reactions, not all of them positive. This Mustang is different. Who doesn’t love an old-school V8 muscle car, especially one that sticks two fingers up to the automotive elite?

The Sutton CS800 feels a bit uncouth compared with ‘premium’ rivals, but that’s part of its appeal.

It’s the ultimate right-hand-drive Mustang, and there’s nothing quite like it.