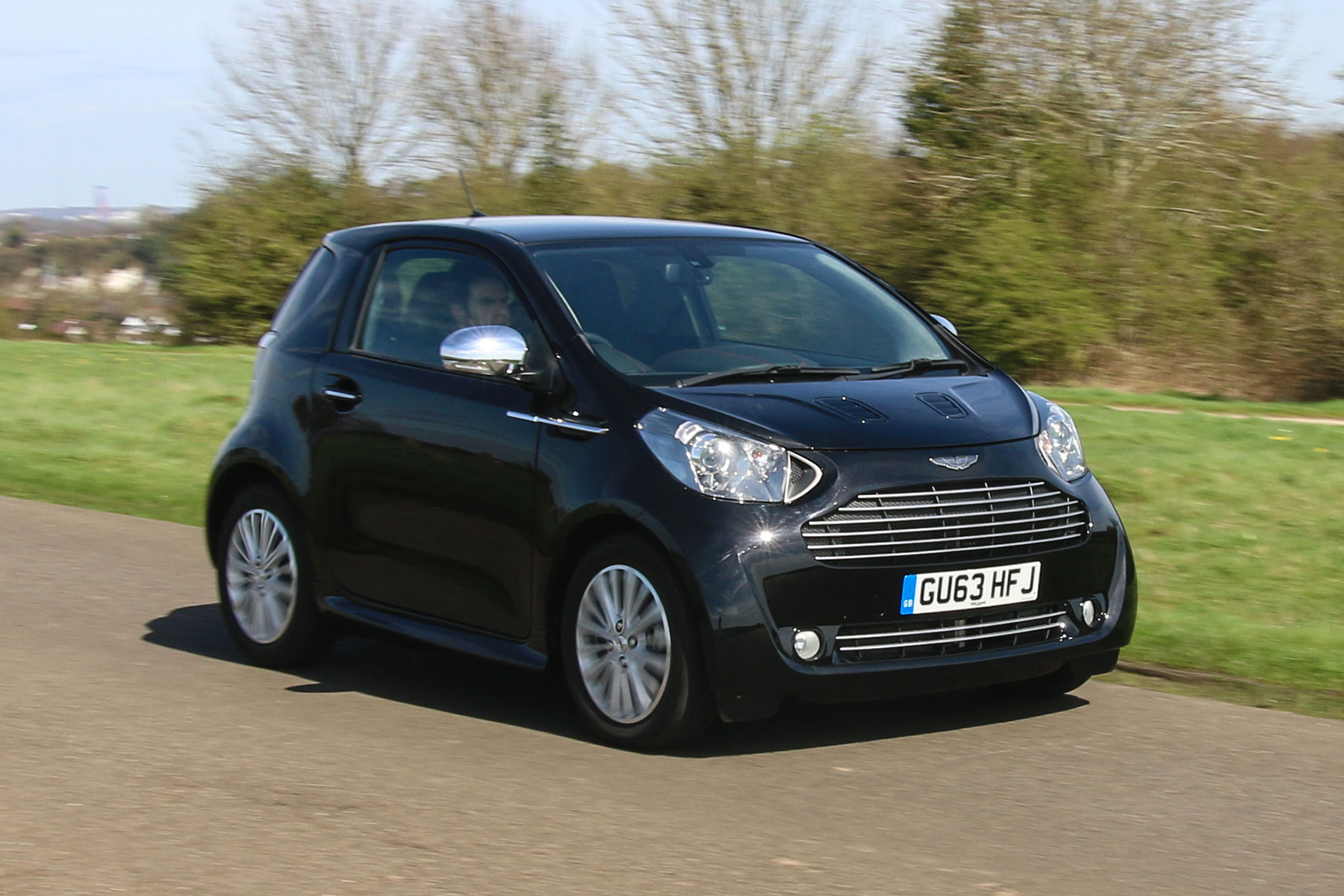 A bloke near me drives a Mk2 MR2 that’s been modified to resemble a Ferrari F355. With rosso corsa paint, tan leather interior and a full complement of prancing horse badges, it’s quite a convincing replica… until he starts the engine. As the humble Toyota four-pot coughs into life, even the most car-illiterate would sense something is awry.

So-called ‘badge engineering’ is almost as old as the automobile itself; the very first BMW was a rebadged Austin Seven and British Leyland recycled the idea ad infinitum until its deserved demise. So this ‘faux-rari’ certainly isn’t the first car with ideas above its station. However, few efforts at rebranding have been quite so ambitious – audacious, even – as the Aston Martin Cygnet.

The Cygnet was allegedly born from a saké-fuelled conversation between Aston Martin and Toyota CEOs in a Nürburgring pit garage. The idea was to create a luxurious city car to offer exclusively to existing Aston owners. The reality, launched in 2011, was a badge-engineered Toyota iQ that failed to sell and was withdrawn from showrooms after less than three years.

Today, the How Many Left website lists just 150 Cygnets registered on UK roads, which makes this upmarket upstart considerably rarer than a Vantage or DB9 of the same era. A modern classic? We drive an immaculate 5,000-mile example – kindly loaned by David Rose – to find out. 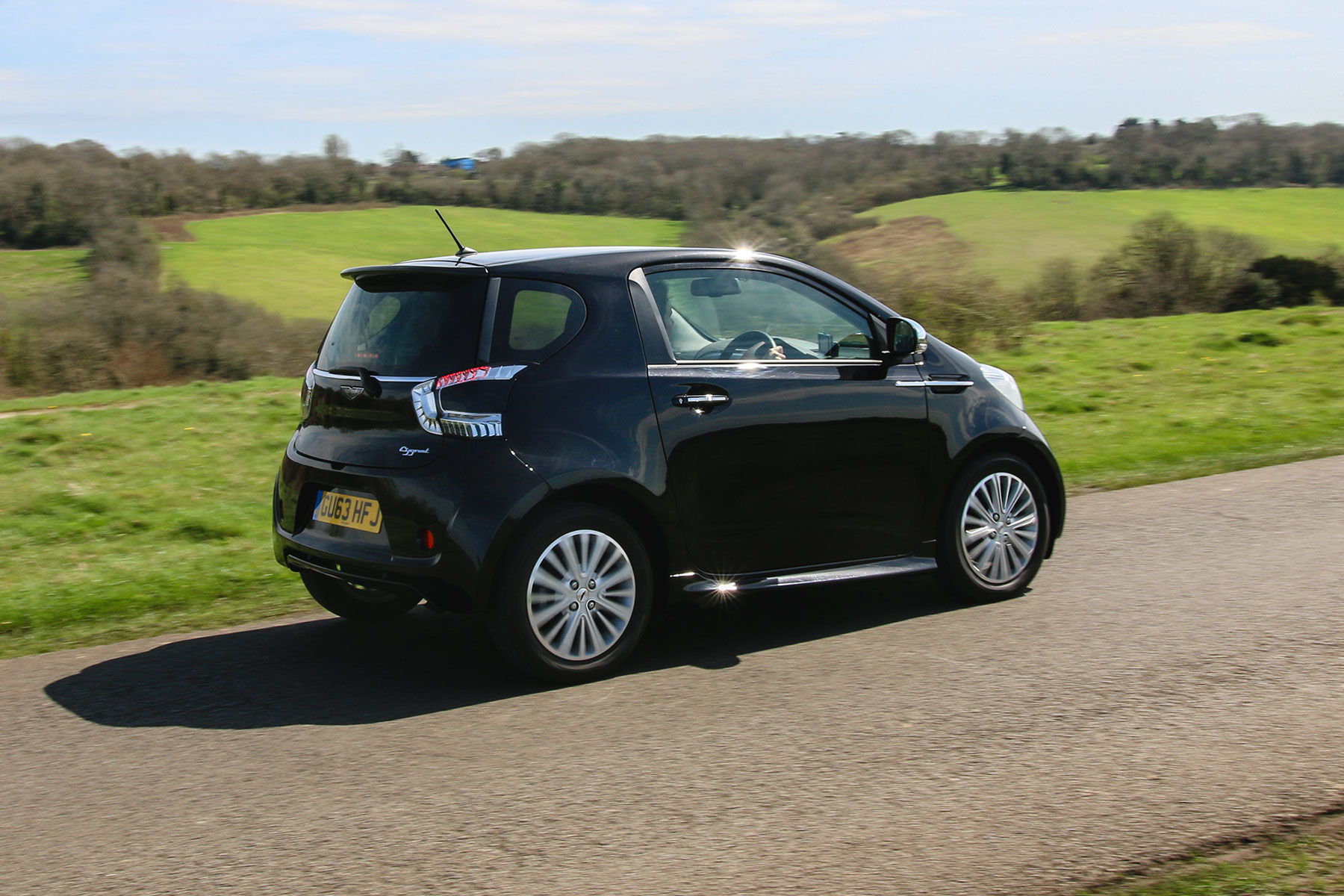 To give Gaydon its due, it did more than simply slap its famous wings on a Toyota. External updates versus the iQ include the handsome ‘S-Curve’ grille (made from extruded aluminium), DB9-style wing vents and rear lights, and bespoke alloy wheels. Bodywork was painted by Aston Martin, too, resulting in a lustrous, flawless finish.

Inside, the Cygnet feels markedly more luxurious than its Japanese cousin. The dashboard and seats are swathed in soft leather and Alcantara, and there are deep-pile carpets underfoot. Instruments are also unique to Aston, plus owners could specify high-end options such as a tailored luggage set.

Like the aforementioned MR2, though, any illusion of ‘Aston-ness’ is shattered when you start the engine. The Cygnet uses a 98hp 1.3-litre petrol four, unmodified from the iQ and mated to a six-speed manual or CVT auto gearbox. Zero to 62mph takes a pedestrian 11.6 seconds and top speed is 106mph. Interestingly, Aston Martin never offered the iQ’s smaller 1.0-litre engine, thus denying the Cygnet exemption from the London Congestion Charge. 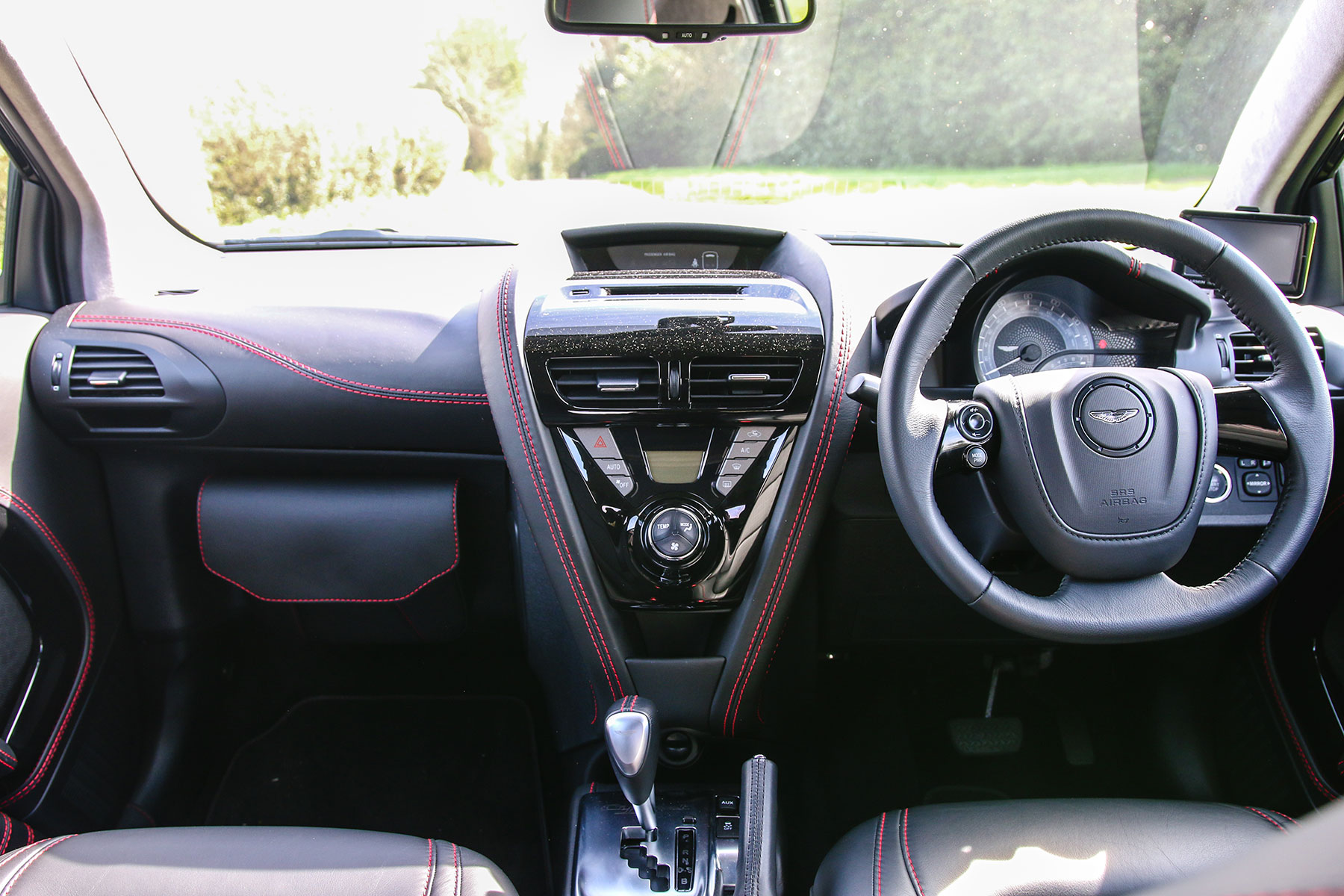 On the road, the Cygnet feels, well… like a Toyota iQ. And, as long as you didn’t expect dazzling dynamics or a vociferous V12, that’s no bad thing. The iQ – sorry, Cygnet – has light controls, an eager engine and a turning circle that would shame a TX4 taxi. In short, it’s well suited to city driving. Just be aware of its 1,680mm width: more akin to larger superminis like the Ford Fiesta.

CVT transmissions – as fitted to David’s car – are ideal for urban runabouts, obviating the need to change gear while holding the engine at optimum revs for improved efficiency. On faster roads you’ll experience the ‘rubber band’ effect as the CVT juggles engine and axle rotations, but the Cygnet remains sure-footed and comfortable at motorway speeds. 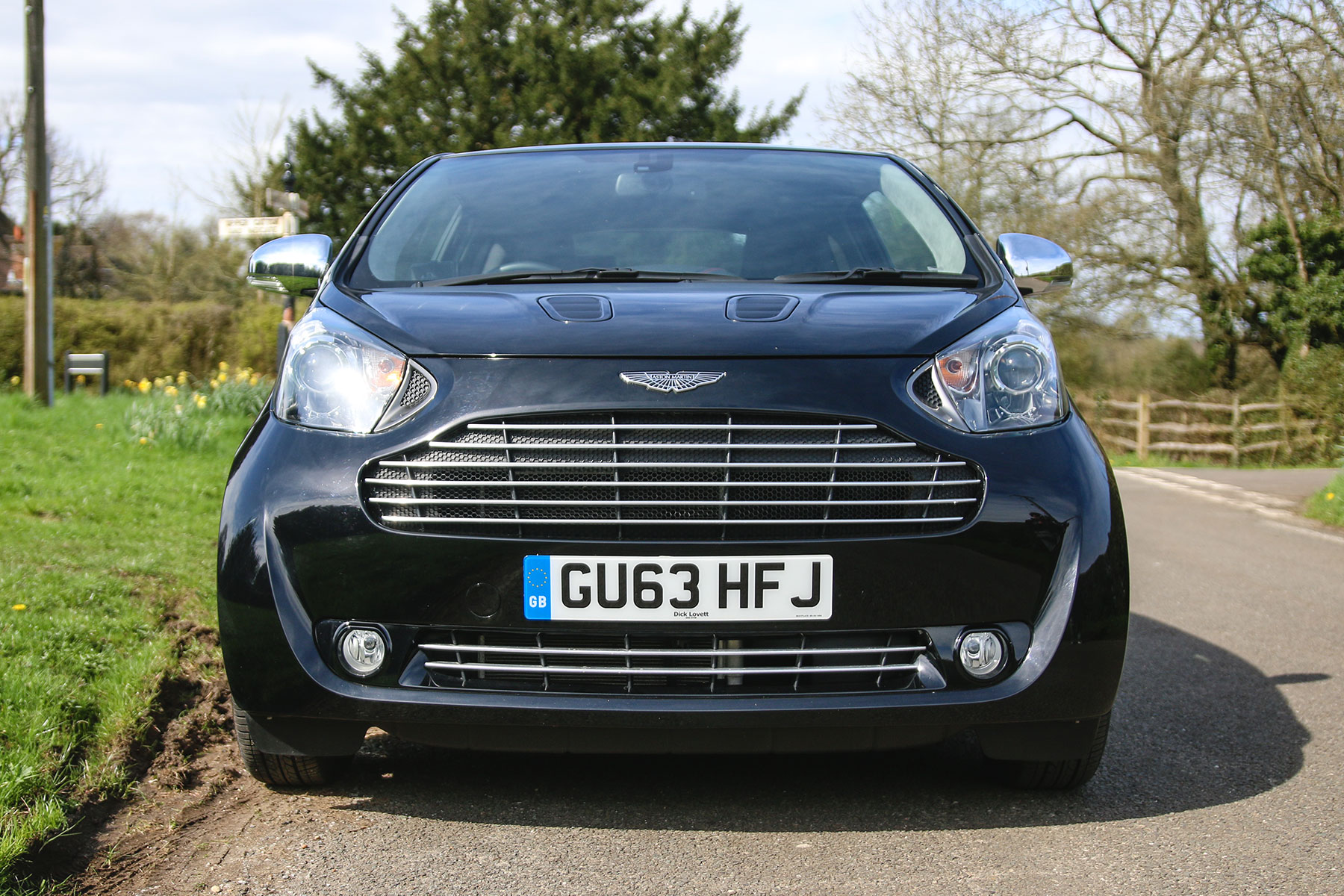 The Cygnet cost around £30,000 when new, nigh-on three times the price of the equivalent Toyota. Today, high-mileage iQs can be yours from around £3,000, while the cheapest Cygnet on Auto Trader is £27,825. The best examples simply haven’t depreciated.

Aside from that Aston badge, rarity is what keeps Cygnet prices buoyant – thus your biggest challenge may be finding one. Just five are listed for sale at the time of writing: three manuals and two CVTs, and all but one located in the south-east of England.

Mileages tend to be low, reflecting the Cygnet’s city-car status, but look out for parking scuffs and dents to Aston-specific bodywork – they won’t be cheap to repair. Remember, originality is key if you have an eye on investment. 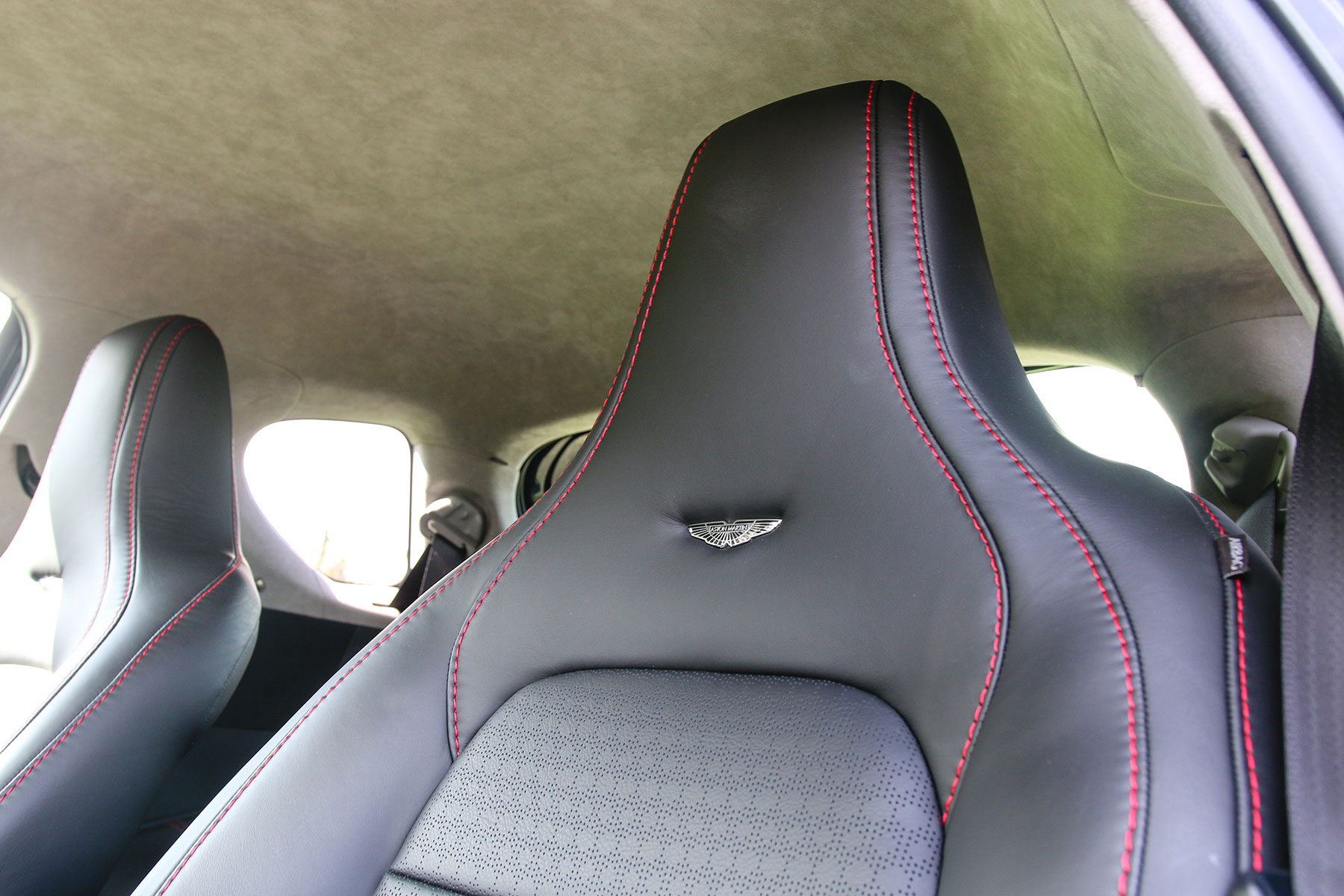 Will Cygnets go up in value? Don’t expect huge gains, but it seems likely in the longer term. And while you need a second mortgage to run most Aston Martins, this one boasts 54.3mpg economy and clockwork Toyota reliability.

Lastly, don’t be under any illusions about the Cygnet being a four-seater. At best, it accommodates three, with the front passenger chair slid forward towards the ingeniously scooped-out dashboard. And you’ll find vastly more luggage space in a DB9… 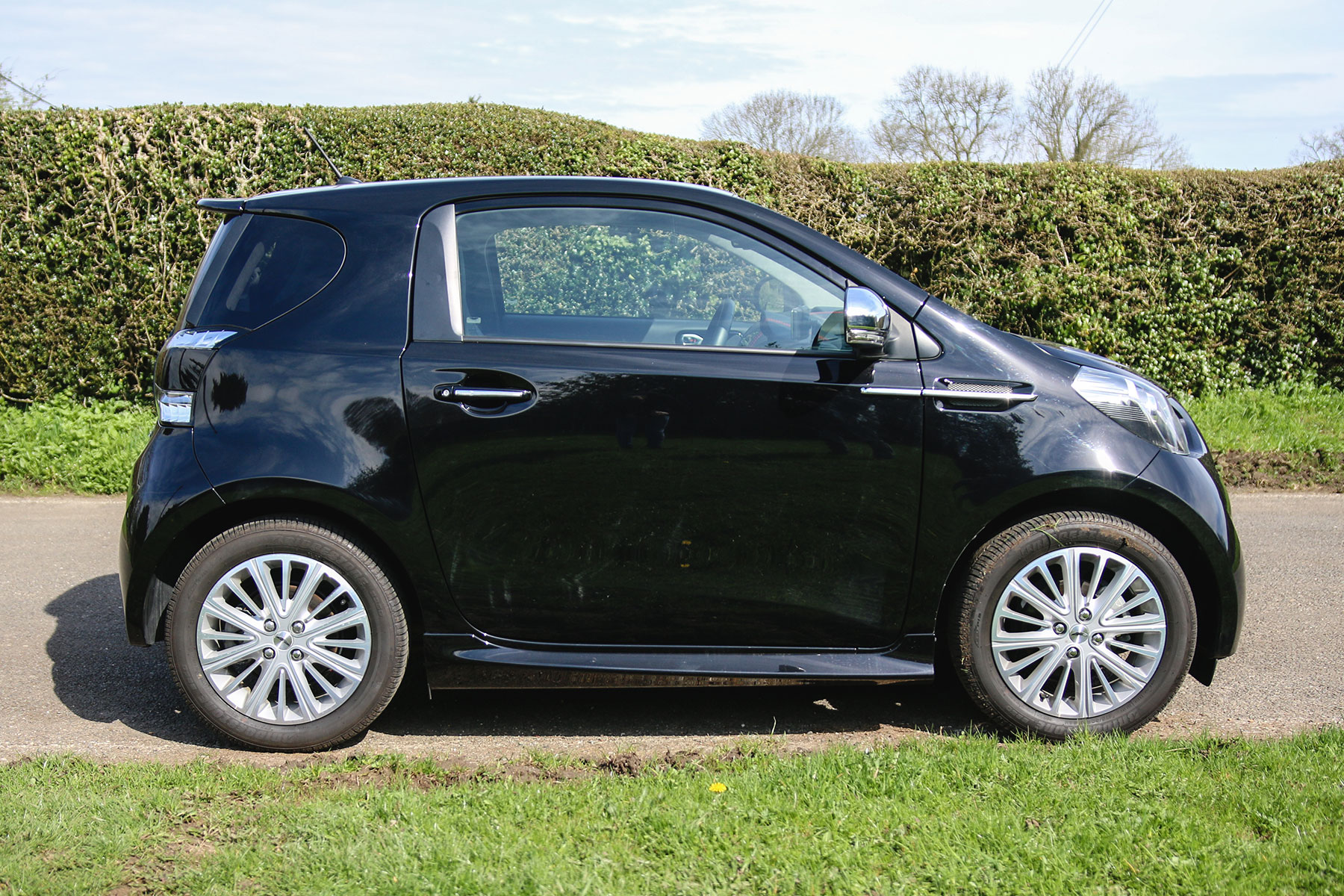 This is a good car. It’s just not a very good Aston Martin. Shortcomings that can be forgiven in a Toyota iQ are harder to overlook in a mechanically-identical machine that costs several times as much. Particularly when you factor in the weight of expectation engendered by those famous wings.

The Cygnet failed because it stretched badge engineering beyond credibility – and all but Aston’s most ardent fans saw through the facade. Today, the company seems reluctant to talk about it, refusing to divulge total sales figures.

That said, we Brits love an underdog, and David’s Cygnet draws as much attention from curious onlookers as any more illustrious and expensive Aston Martin. Nothing else offers such huge brand kudos in such a small package.

Aston Martin’s ‘ugly duckling’ isn’t for me. I’d rather have a Ferrari-fied MR2. Yet for those who decide to take the plunge, I can at least grasp the appeal.