The Aston Martin Vantage is a 510hp V8 supercar – and a fully paid-up rival for the Porsche 911 and Audi R8. We drive it on road and track. 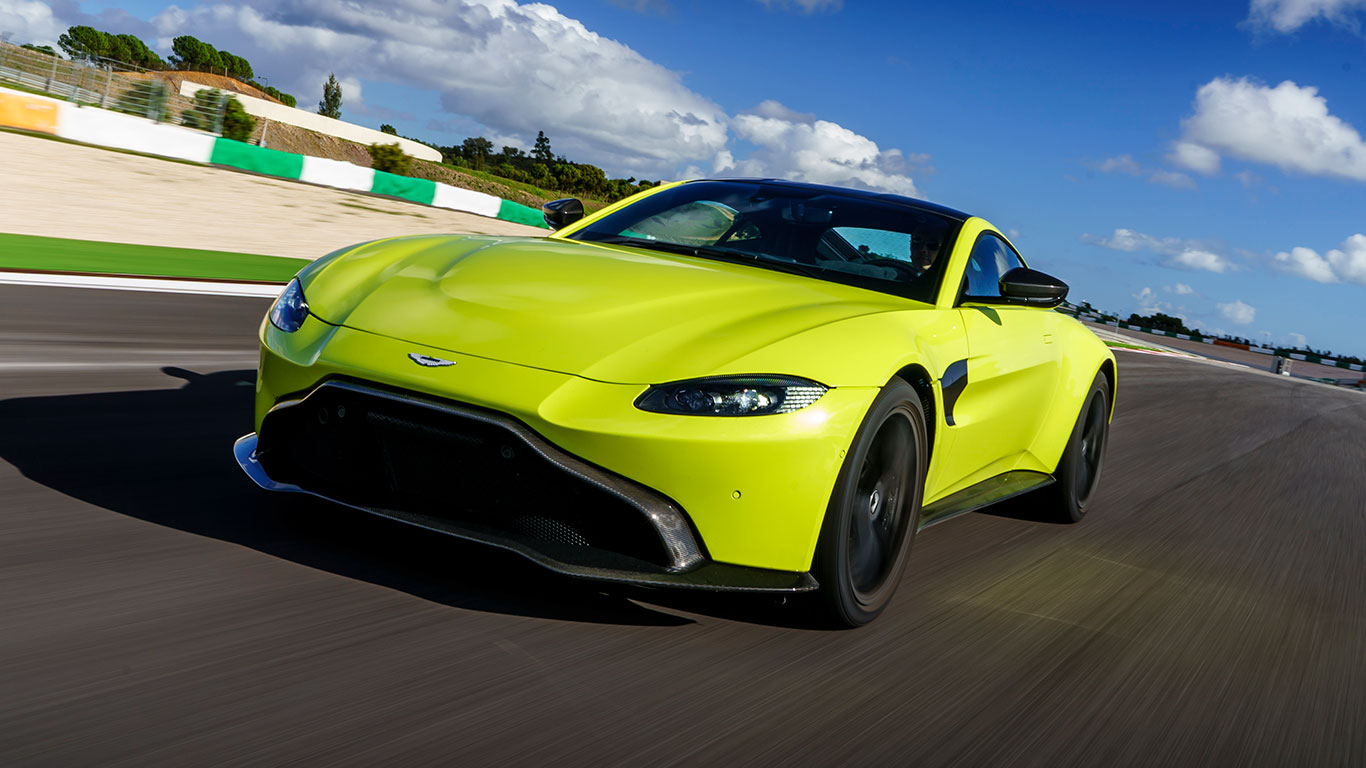 Aston Martin’s Vantage badge is 70 years old this year, so we’re celebrating with a throwback to our most memorable drive of 2018. It began in the Portuguese mountains, then concluded with hot laps of the rollercoaster Portimao circuit. The car was the third-generation Vantage: follow-up to was one of the most successful – and critically acclaimed – Aston Martins ever. Expectations were high.

Still, when Matt Becker tells you he’s just signed-off a “really fantastic driver’s car”, you sit up and take note. Becker, like his father before him, was chief chassis guru at Lotus. Poached by Aston Martin in 2014, he honed the handling of the Vantage, using the (turbocharged, 991.2) Porsche 911 GTS as his benchmark.

If the old Vantage erred towards being a softly-set-up GT, this was a sports car, pure and simple. The raw ingredients certainly promised much: a 510hp V8, eight-speed paddleshift gearbox, electronic rear differential and 50:50 weight distribution, plus 0-62mph in 3.6 seconds and a 195mph top speed.

However, at £122,805, the Vantage faces some formidable rivals, including the Porsche 911 Turbo, Audi R8, Honda NSX and Mercedes-AMG GT S. How did it stack up versus the super-sports establishment?

Lime flies (when you’re having fun)

Before you ask, that colour is called Lime Essence. And while stylist Miles Nurnberger says it will take “a small proportion of sales”, the decision to reveal the Vantage in this retina-roasting shade was significant. This is an Aston Martin to woo Lamborghini drivers. And in terms of design, that difference defines it.

Many 21st century Aston Martins, while beautiful, have been like Russian dolls. Even Nurnberger admits that confused customers struggled to tell them apart. With so much new product in the pipeline, drawing the lines between, say, a Vantage, a DB11 and a DBS Superleggera becomes increasingly important. Thus the Vantage, while still recognisably an Aston (even in Lime Essence), looks altogether more aggressive.

“The DB11 has a high nose like a refined gentleman, but this has a low, shark-like snout that sniffs the blood of its prey,” explained Nurnberger. “Think of it as the love-child of the Vulcan hypercar and James Bond’s DB10.” Where other Astons have embellishment, the Vantage has stripped-back functionality: spot the simple mesh grille, hidden door seals, a ducktail spoiler and slimline LED tail lights (which echo the shape of Aston’s signature ‘S-curve’).

Heading out on-track in the new Vantage. Signature ‘Lime Essence’ paint is more Lambo than trad-Aston, but suits the car. pic.twitter.com/6vELRrJztN

But the boldest design detail is the racing-style rear diffuser, which can be specified in contrasting colours. “Blood was spilled over those strakes at the back,” said Nurnberger, “but they’re vital for performance. They channel dirty air away from the tyres and contribute towards 77kg of rear downforce at speed.”

Getting some Merc experience 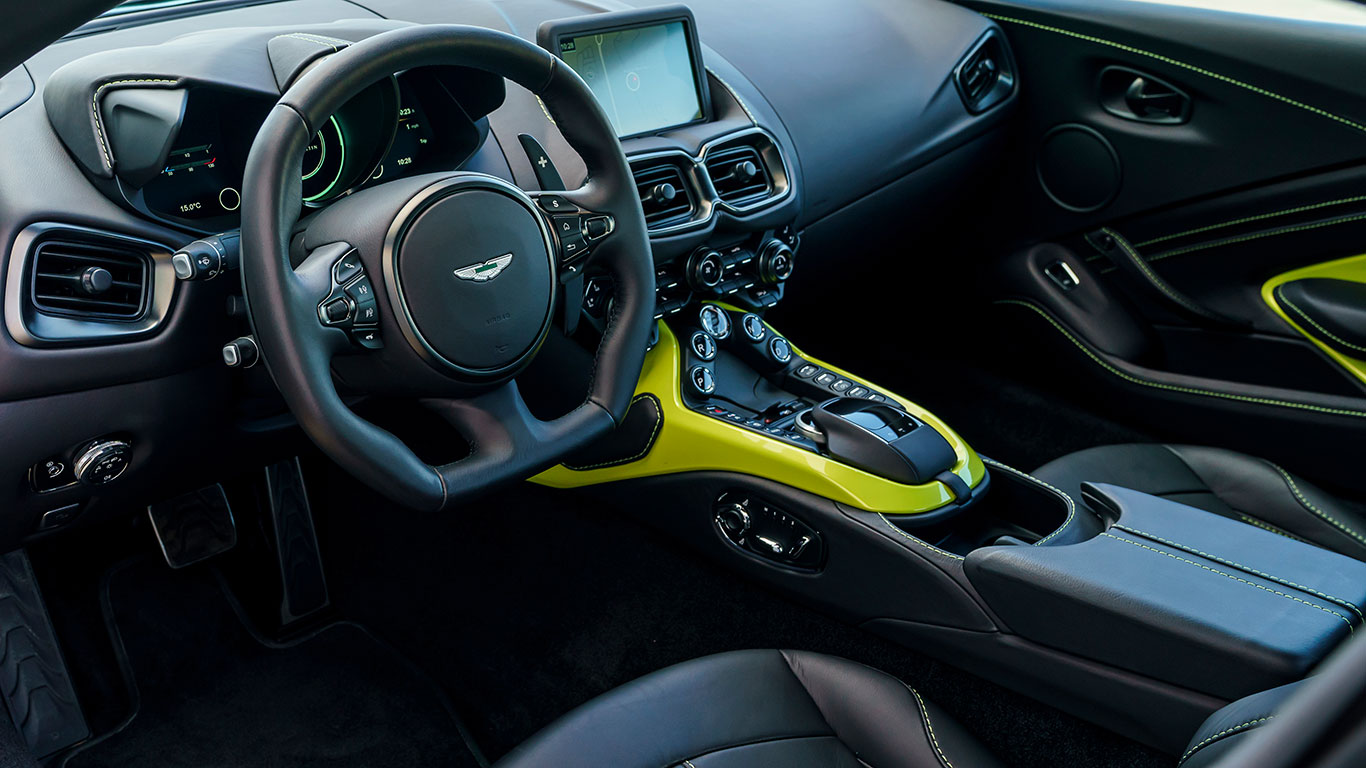 Aston Martin sources its switchgear from Mercedes-Benz rather than Ford nowadays, yet interiors still aren’t its forte. If you’ve just stepped out of an Audi R8, you’ll likely be disappointed.

Let’s start with the positives. The Vantage remains a two-seater (unlike, of course, the 911), but offers markedly more headroom and legroom than the previous car. Concave door panels allow extra space for elbows, too. Those on the loftier side of six-feet will no longer feel constrained.

Build quality also seems good. Most surfaces are swathed in neatly-trimmed Alcantara or leather, meaning a pleasing absence of plastic. And while the squared-off steering wheel prompted jokes about the infamous Austin Allegro ‘Quartic’ wheel, it’s comfortable and unobtrusive on the move. 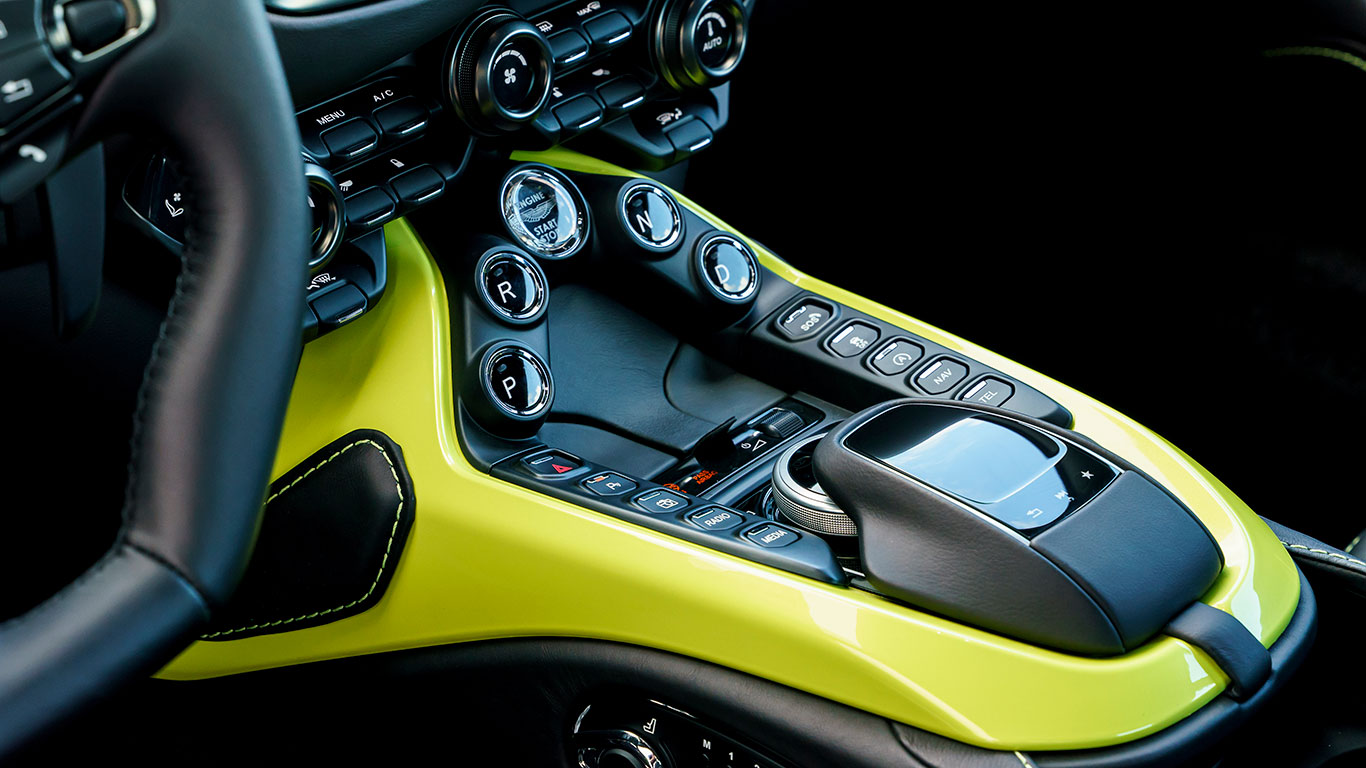 Negatives? Well, there’s nothing explicitly wrong with Mercedes’ old ‘Comand’ media system, but it’s notably less slick and attractive than newer versions. And making do with outdated tech is frustrating in a car costing this much. At least Apple Carplay and Android Auto smartphone integration are standard.

Ergonomics could be improved, too. The Vantage’s centre console feels cluttered, with lots of buttons squeezed into a small space. If only Aston had applied the same minimalist design principles inside as out. 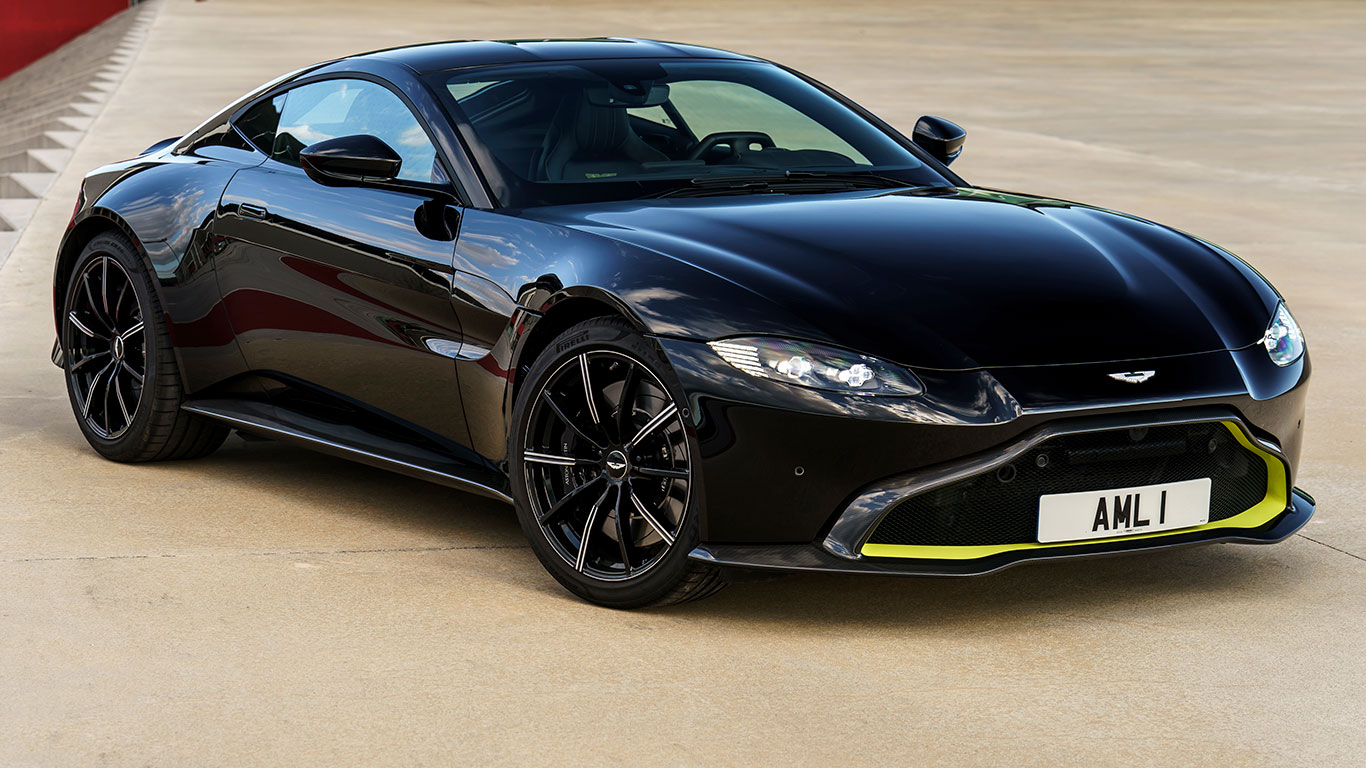 Switches and column stalks aren’t the only items Aston Martin buys in from Mercedes-Benz, of course. The Vantage’s V8 also comes from Stuttgart, where it’s fitted beneath the long bonnet of the AMG GT. It’s the same twin-turbo unit as the DB11, albeit with a touch more torque: a muscular 505lb ft from just 2,000rpm.

I tackled the road route first, heading for the hills, and the kind of roads that resemble furious scribbles on the map. Tellingly, there’s no ‘normal’ setting for the chassis and powertrain – only Sport, Sport Plus or Track. I started in default Sport, letting the auto ’box take the strain and enjoying the V8 rumble as it ricocheted off the rocks. It’s less bombastically OTT than the AMG GT, particularly on the over-run, but don’t be fooled: the savage snarl at high revs is so hard-edged it could crack concrete.

Unfortunately, cracked concrete is very much on the menu. An unusually harsh winter had left Portuguese roads blistered and broken – yet helpfully akin to a typical British B-road. Many supercars would feel jittery and flighty here, but the Vantage holds its line, flowing from one bend to the next with finely-damped fluidity. 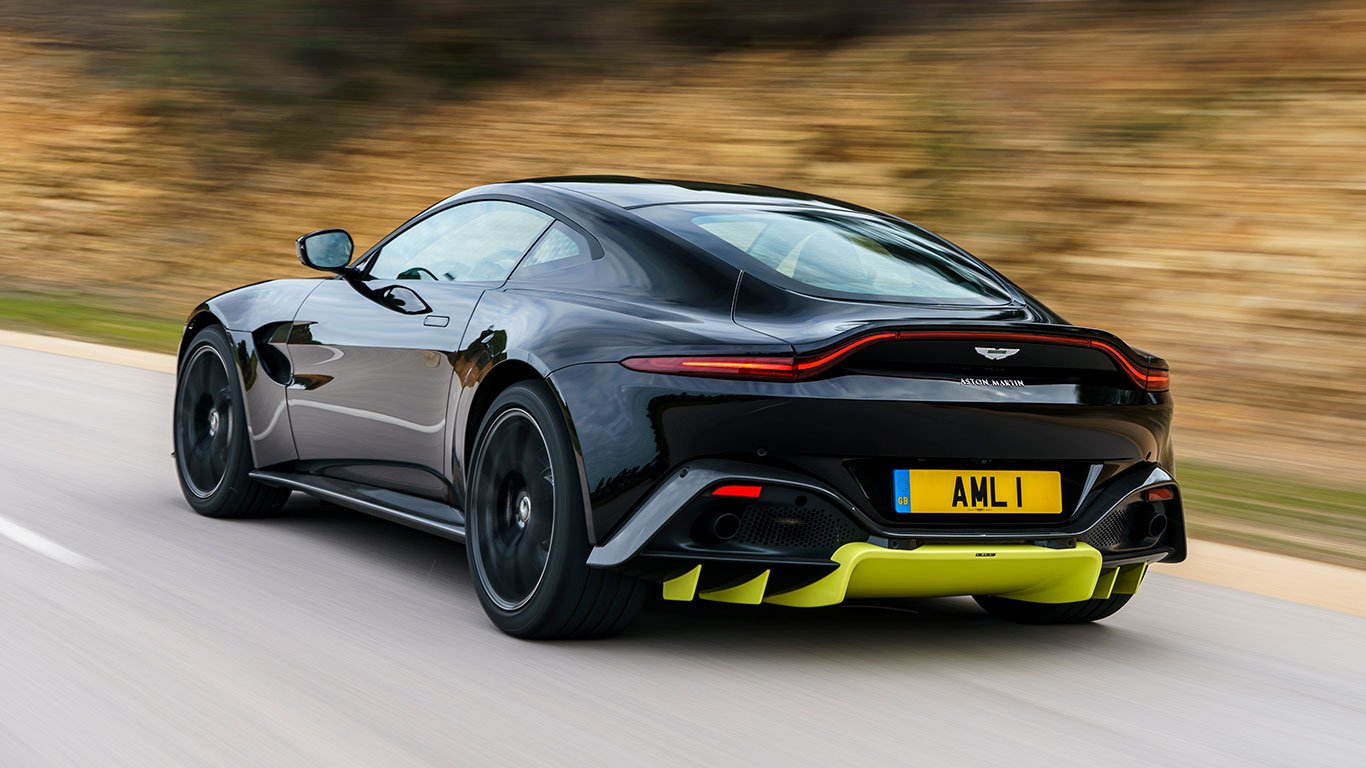 I clicked the switch on the steering wheel to Sport Plus, feeling the car hunker down as its front-end bit voraciously into apices. This is no nose-heavy GT: indeed, with its V8 wedged up against the bulkhead, the Vantage is practically mid-engined. The result is a litheness and lack of inertia, coupled with beautiful balance – even when the road surface has other ideas.

By now I’m grinning broadly, blasting along a ribbon that rides the mountain ridge from one peak to the next. Shifting with the paddles, there’s a mechanical clunk as each gear engages. The steering wheel writhes in my hands, alive with textured feedback, and the brakes (standard steel discs here) are meaty and reassuring. Matt Becker has worked his magic alright. 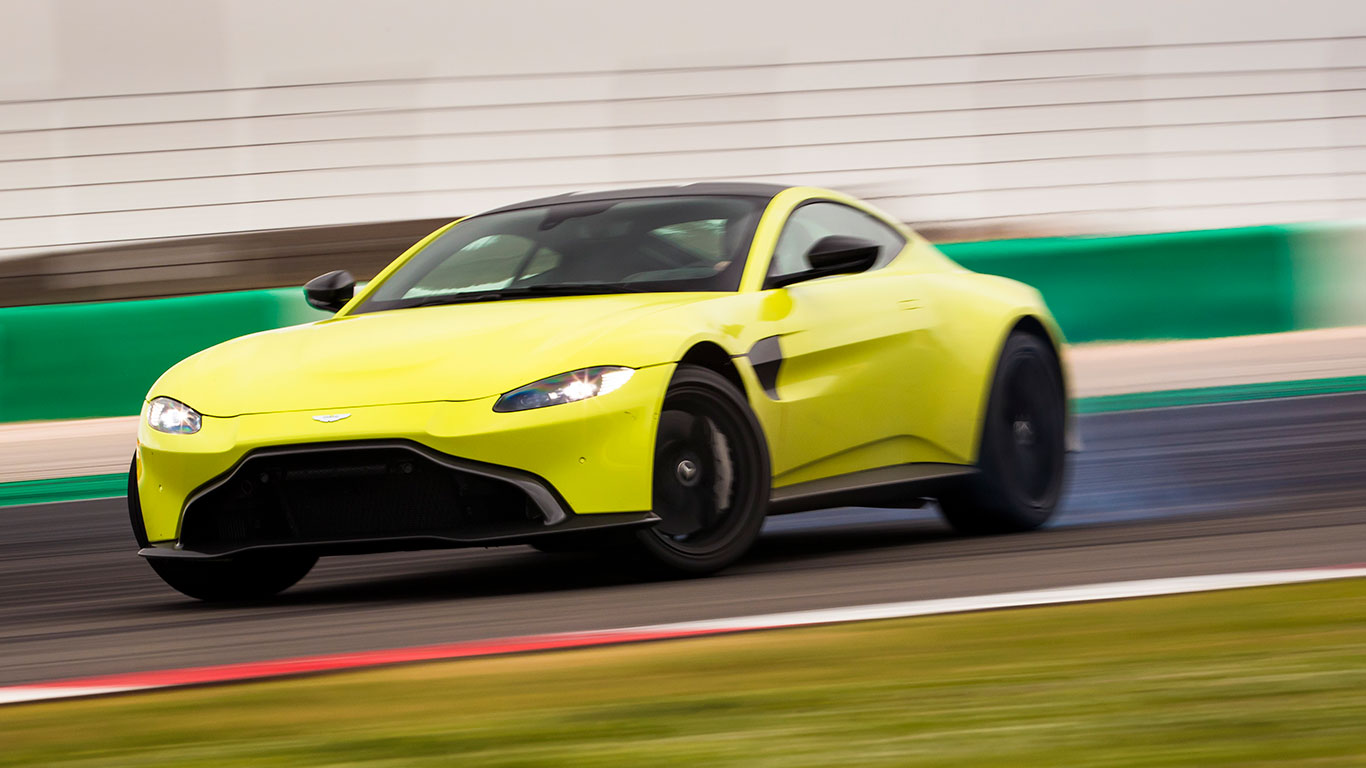 All this bode well for the Autódromo Internacional do Algarve, known to most Brits simply as ‘Portimao’. Even so, this circuit is a stern test for both man and machine, with blind crests, changing elevations and off-camber corners. Donning a balaclava and crash helmet, I swap into one of the Lime Essence cars, this one with louder quad exhausts and the optional carbon-ceramic brakes. Time for Track mode.

With stability control now dialled-down, I indulged in some gratuitous oversteer. That a 510hp rear-driver goes sideways is hardly news; what impresses is how progressive and malleable it feels. In the dry at least, those Pirelli P-Zeros only relinquish grip if you deliberately provoke them, with slides calmly tempered by the E-Diff. Unless you switch everything off, which is an option…

The big-lunged AMG motor popped and spat as I reached three-figure speeds on the start/finish straight, then stamped on the fade-free brakes for a deceptively tight left-hander. Several times I misjudged my speed, but the Aston flatters to deceive, regaining its composure when I’d lost mine. After two flat-out sessions, I was exhausted yet exhilarated.

One of the year’s best drives 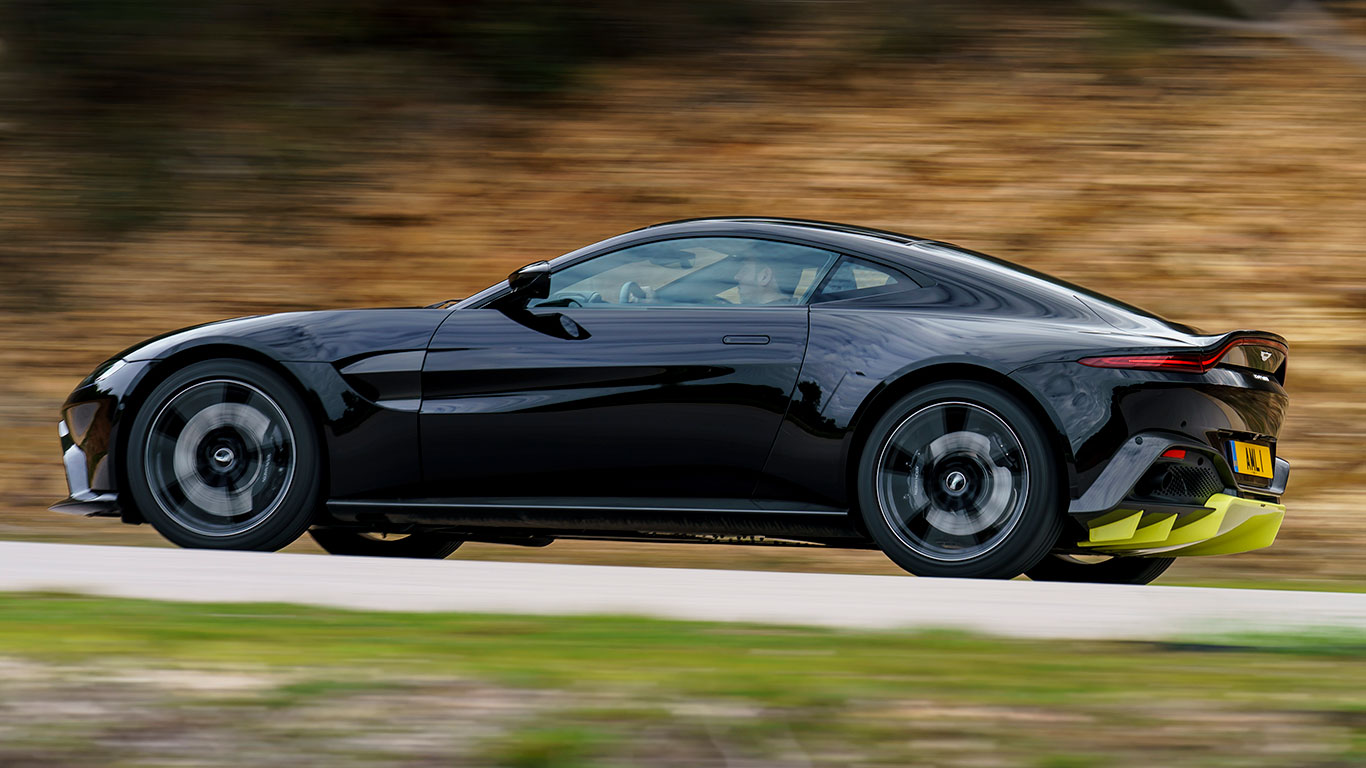 Even after the endorphins had faded and I was back home in non-sunny Surrey, I still felt excited about the Vantage. I’m no Aston apologist – I found the old Vantage flawed and the DB11 underwhelming – but this car upped Aston’s game.

Better than Becker’s benchmark 911? In many ways, not quite. But it’s more characterful than a new 992 Turbo, and probably easier to live with than the forthcoming GT3. Porsche devotees won’t be cancelling their subscriptions to Total 911 just yet, but Aston serves up ample style, ability, excitement and badge kudos to sway the floating voters.

Impressively, it’s also a better car than the Mercedes-AMG GT it shares many parts with, and feels more bespoke and downright special than anything in its class – save perhaps the McLaren 570S. Let’s hope they make a V12 version –  that could be our drive of 2021…

The Porsche 911 Turbo is the ultimate 'city' supercar. But it’s also longing to escape – and fast. We drive the 992 Turbo S Cabriolet.
Read more
Previous articleHow to change the address on your vehicle log book online
Next articleMore than 1 in 3 new car buyers now choose automatic

A survey of 1,500 electric car drivers reveals many charge their EVs with household extension leads, often 'daisy-chaining' them together in a dangerous fashion.
Read more

Confirmed: the new Land Rover Defender will launch in 2019

Buy a Skoda Yeti to save on car insurance

The Skoda Yeti is the cheapest family car to insure, with an average premium of £282.22 a year. The Tesla Model X is the most expensive to insure.
Read more

The Mercedes G65 AMG can go too fast in reverse and topple if provoked. Time for another recall, then
Read more
Car News

You could own Sir Elton John’s Aston Martin DB7

A classic Aston Martin DB7 first registered to Sir Elton John is for sale. It could be yours for £34,990
Read more

Get your kit on: if car manufacturers designed football kits

The pass-rate for driving tests has fallen to a 10-year low, so Citroen has some top tips for passing your test
Read more
Car News