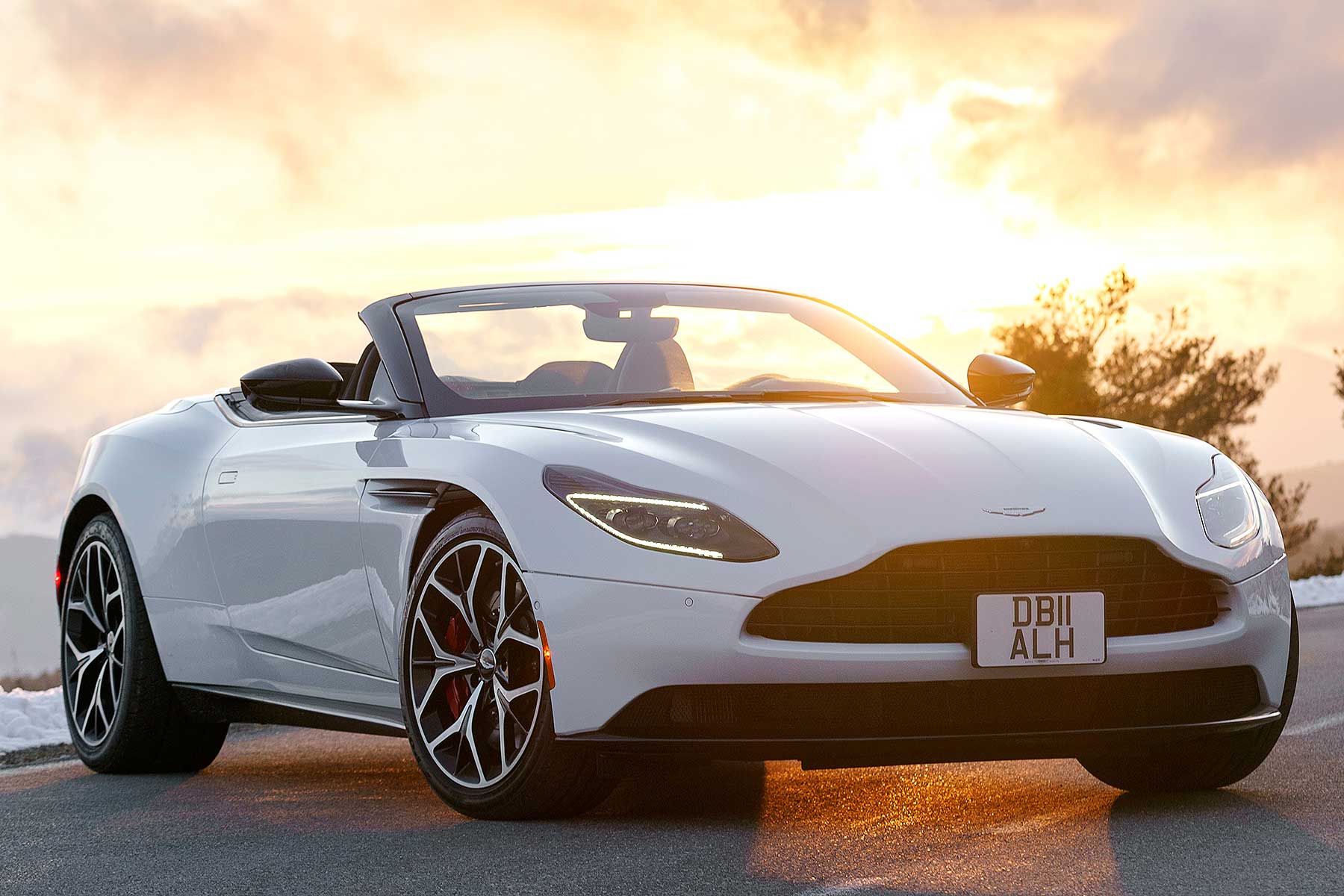 The Aston Martin DB11 Volante is a car that makes you feel like a movie star. The drop-top sister car to the DB11 coupe of course has to be driven with sunglasses on, and you’ll be even more aware of all the people stopping, staring, turning heads at you. Don’t bother with years of acting classes, simply get one of these instead.

That’s the Aston Martin effect. Some sneer at Ferraris and Porsches are 10-a-penny in places. An Aston is still the supercar people love, and this DB11 Volante convertible follows 2016’s all-new DB11 coupe just in time for summer 2018.

You can only get the DB11 Volante with the Mercedes-AMG V8 engine. For now; it’s almost certain a V12 will follow, but Aston thinks the V8 is ideal for the moment, particularly as it means the list price can come in just over £161k: a Ferrari Portofino, its Italian arch-rival is £166k. 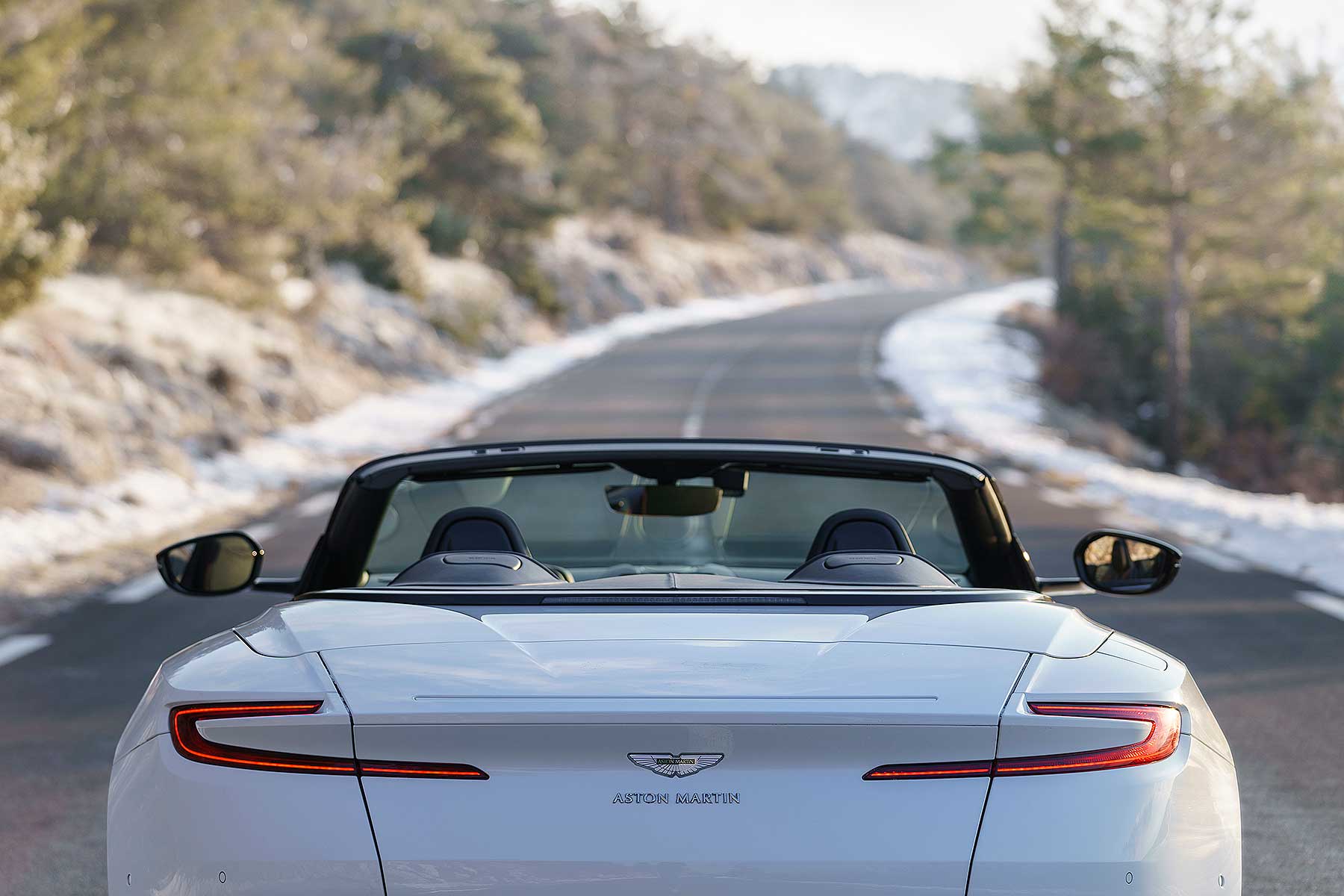 It’s a busy time for Aston. An all-new car a year will be rolled out until the end of the decade, on top of all the derivatives. But as there was a DB9 Volante, there had to be a DB11 Volante, to satisfy all those for whom only an open-top will do. And there’s a good number of them. Maybe even more, if Aston can make a drop-top as driver-pleasing and complete as a coupe. Let’s see… 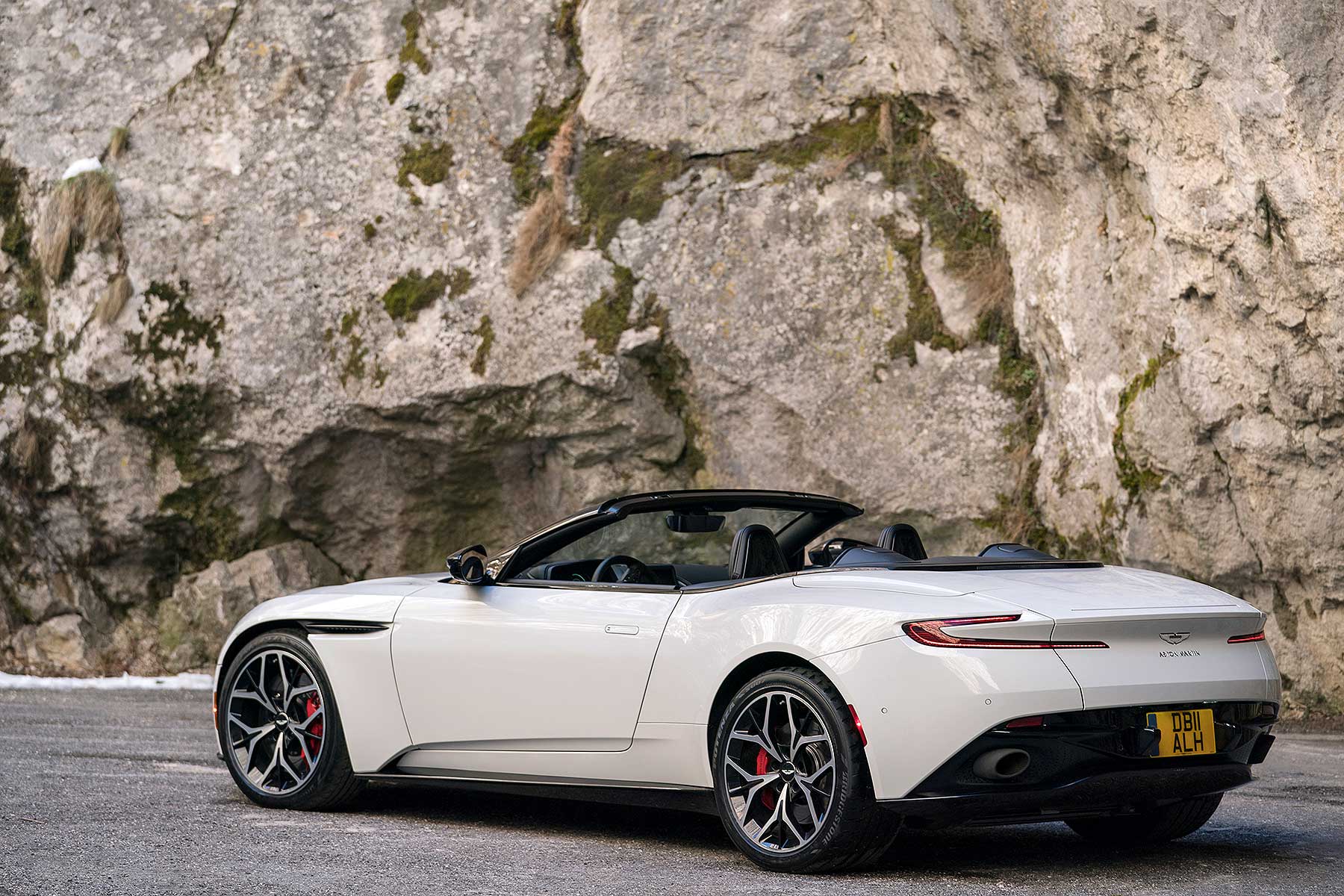 The DB11 Volante is all about elegance. Like the coupe, it’s a refined design. It doesn’t shout about itself, isn’t packed full of extreme angles and OTT graphics. But it still stands apart thanks to its sumptuous lines. And its size: this is a big car, a wide car, whose shark nose front commands a lot of presence.

The talking point is the roof. Close work with the supplier has enabled Aston to create more form in its shape – there are more metal supports, so it’s smoother and less tent-like. The fabric roof is tidier too, with seamless fabric joins and a flush-fit glass rear window. It lowers in 14 seconds and raises in 16, at speeds of up to 30mph (we tried it – operating the roof just below 30mph is an impressive moving spectacle).

Aston’s proud of how compactly the roof folds flat into the rear deck, enabling it to be nice and low, giving the back end a clean look (there’s no ‘hump back’, like you get in some cabrios). In profile, it’s slim and lithe, despite its size: roof down, it’s long and lean, an effect aided by a bold undercut to the doors and those oh-so-muscular rear arches. 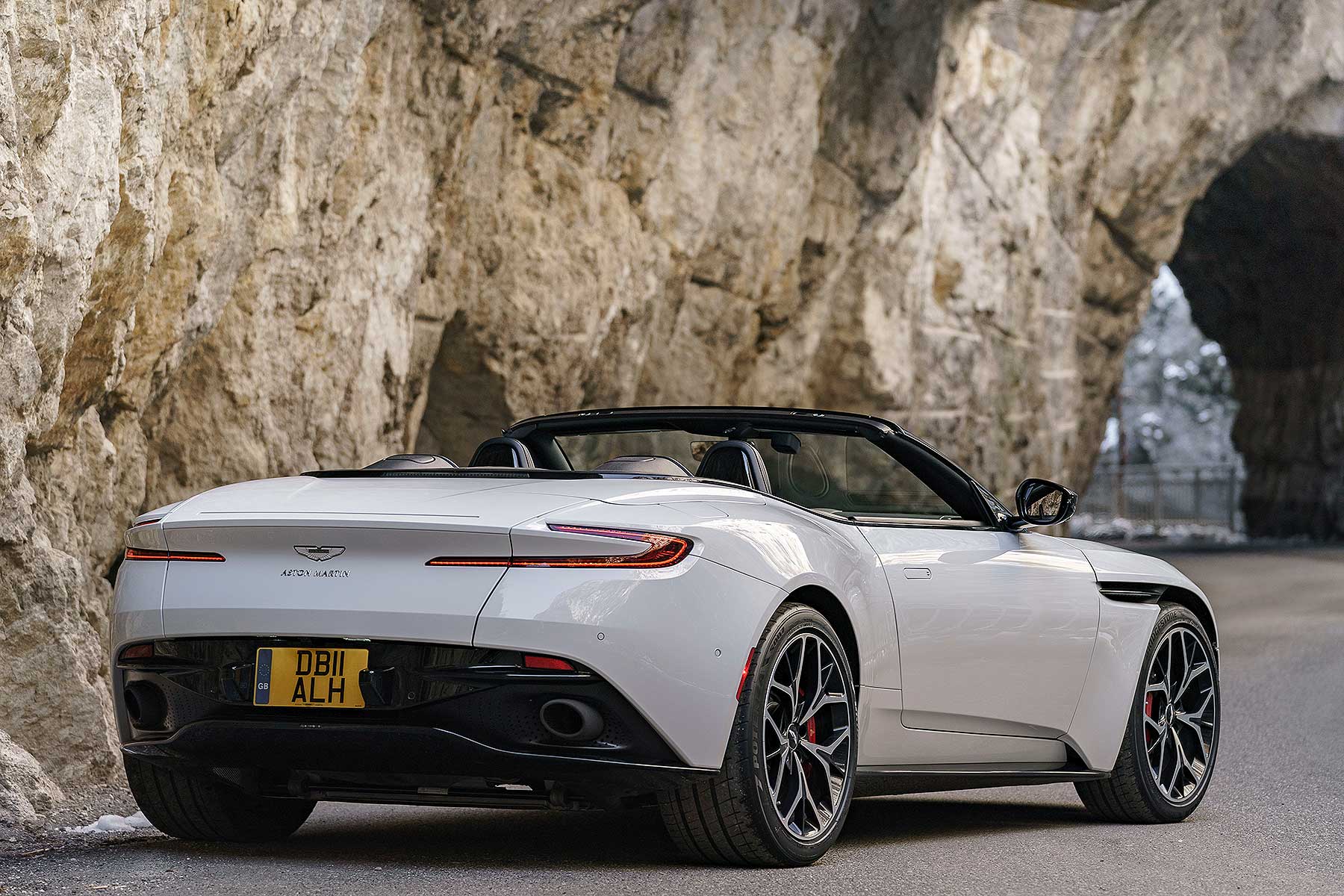 Unlike the coupe, there’s no inbuilt ‘air curtain’ aero duct at the rear. The shape of the roof alters the aero, so it’s not needed, say the designers. It’s also a cabrio in which you can reach the top speed of 187mph with the roof down as well as up. That’s what designing it alongside the coupe from the start, rather than as a follow-on project, does for you. 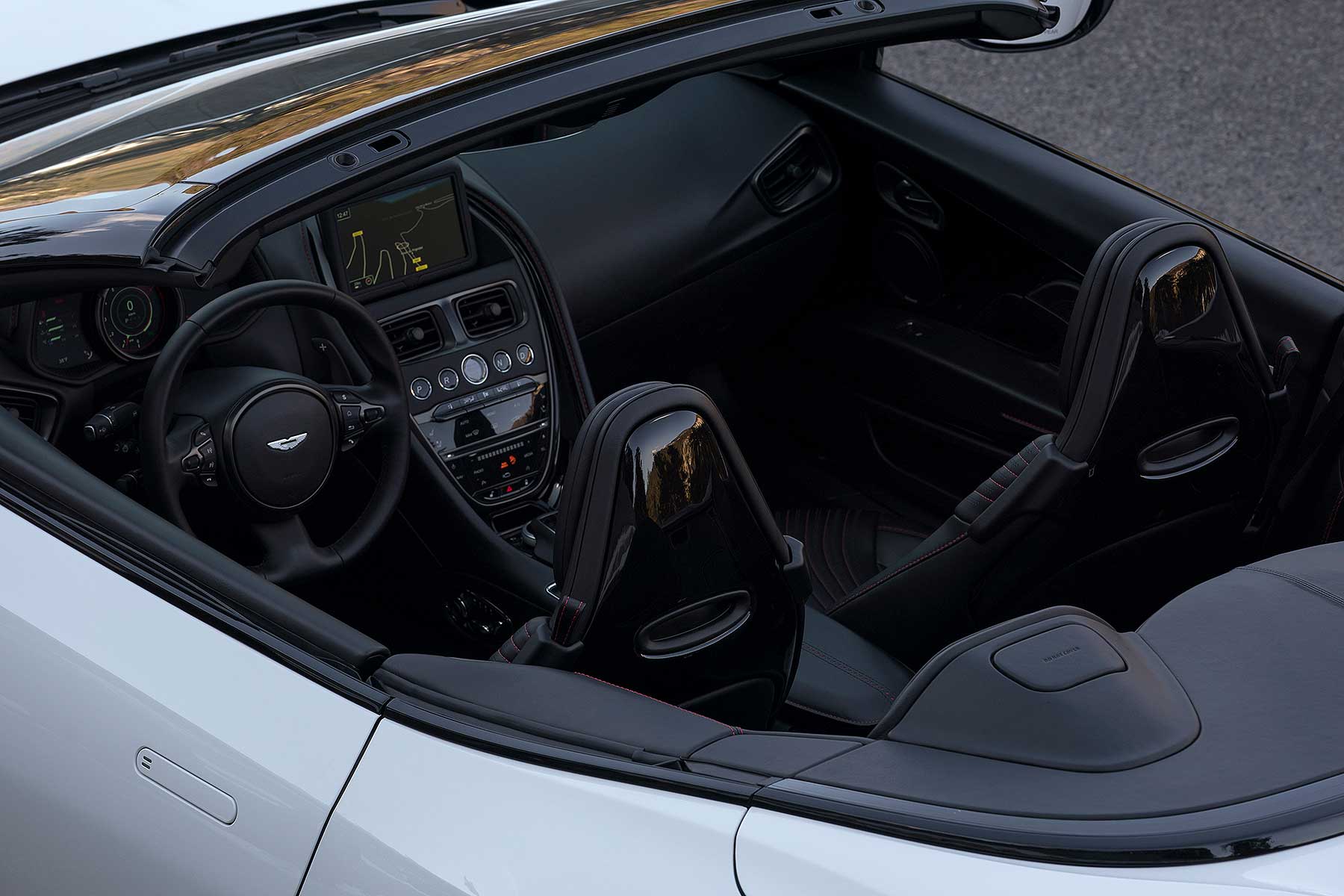 Inside, it’s the same as the coupe, albeit darker with the roof up (rear visibility is restricted) and immeasurably brighter and airier with it down. It’s nice to drop down so low into the seats, a treat to face such an advanced and interesting dashboard, although the complexity of it can be a little overpowering at first. Both the Mercedes-Benz infotainment system’s controls and Aston’s own touch-sensitive buttons take some learning.

The digital instrument binnacle is neat, and reconfigures itself as you scroll from standard, to Sport, to Sport+ modes via the button on the steering wheel (a button on the other side lets you stiffen the dampers – should you want sportier handling without the associated engine drama). It’s complemented by the modern Merc central infotainment system, controlled by a rotary that’s just a little too fiddly to use. 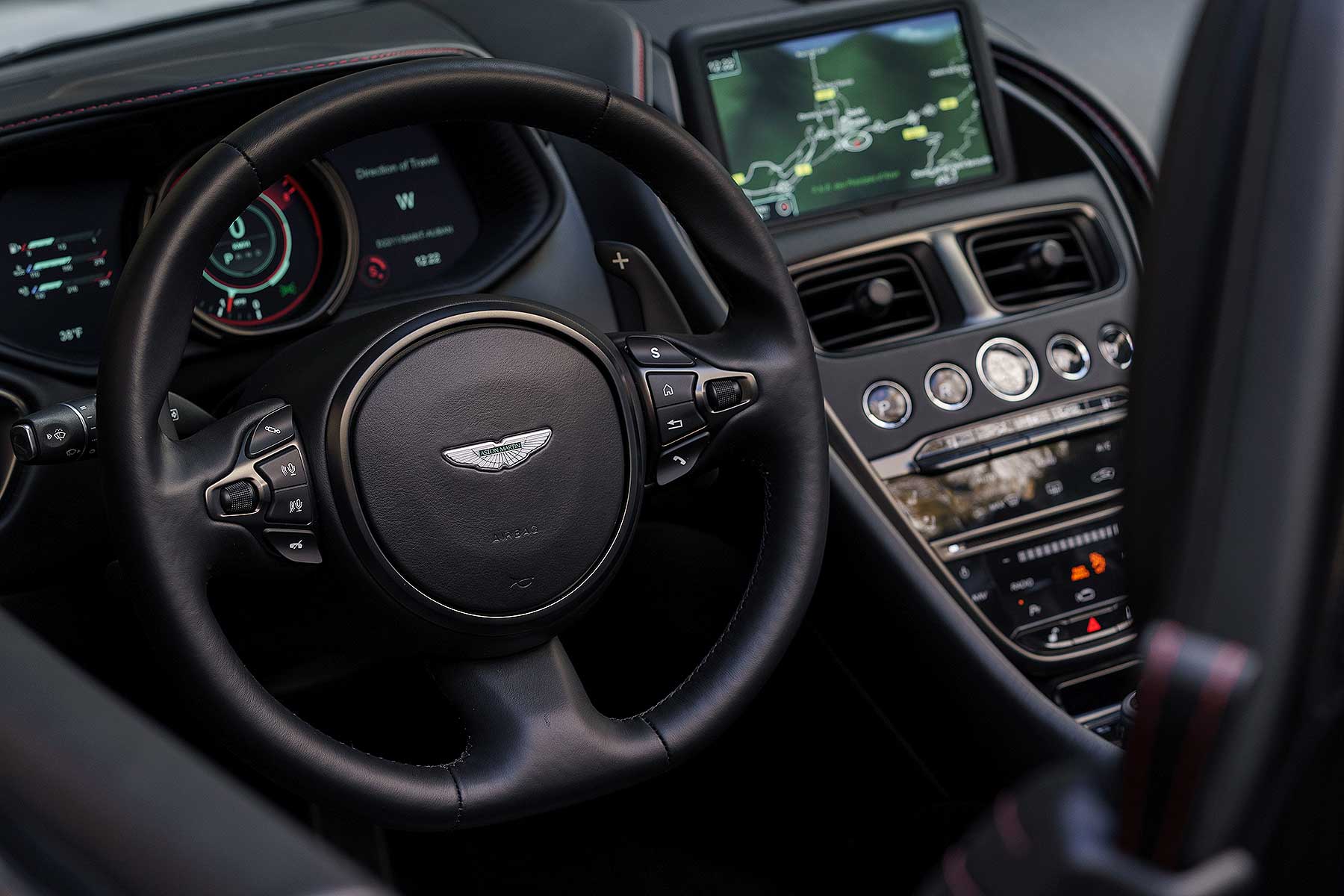 In the rear, there are two seats, but they’re less spacious than in the coupe: Aston’s bought the rear bulkhead forwards, to house the roof, which means there’s absolutely not for adults. They’re OK for kids though – indeed, for the first time, Aston has equipped them with ISOFIX mountings, carving out enough space to take a couple of child seats. Parents, take note: this soft-top’s able to take the twins.

Behind, there’s a 206-litre boot (20 percent bigger than before), with an opening carved out to be as big as possible. It’s not as open as in the coupe (which is 260 litres), but it’s pretty decent for a svelte cabrio, although if you want to lower the roof, you need to pull down a beautifully-trimmed divider panels that trims space to 160 litres.

Aston’s introduced some new trims to the Volante, including veneers for the back of the front seats. They look rather smart, giving it a bit of a race-bred look, but only in the best possible taste, of course. Expose them while you stand and chat with friends thanks to the remote roof operation via the keyfob. Just make sure that divider’s down in the boot, or the roof won’t operate… 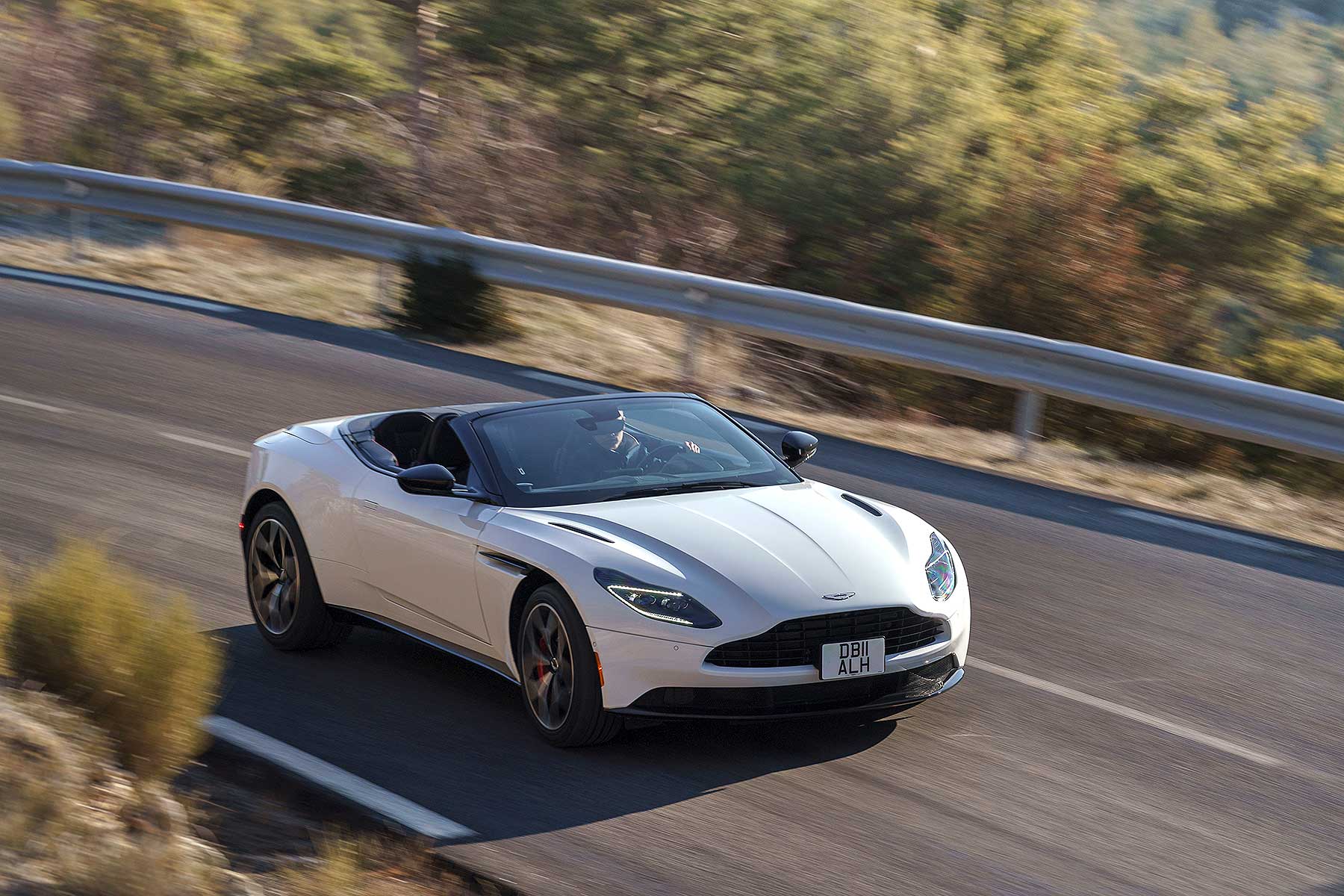 Before setting off, what do you do with a cabrio first of all? Lower the roof, of course. The DB11 mechanism works smoothly and efficiently: it’s much quieter than before, with hushed operation and little of the cheap-sounding whirr of older models. Hold the button on the centre console down while you buckle up, and you’re ready to go almost straight away.

At slow speed, this is a lovely car to drive. The turbo V8 serves up effortless torque, the eight-speed gearbox is impeccable and steering is nicely weighted and accurate. Good job: it’s a big car, feeling very wide (it’s the best part of two metres even without door mirrors – 2,060mm including them…), and threading it through tight, winding French roads was occasionally precarious. But so calming and creamy is the classic V8 hum, really, it’s fine. 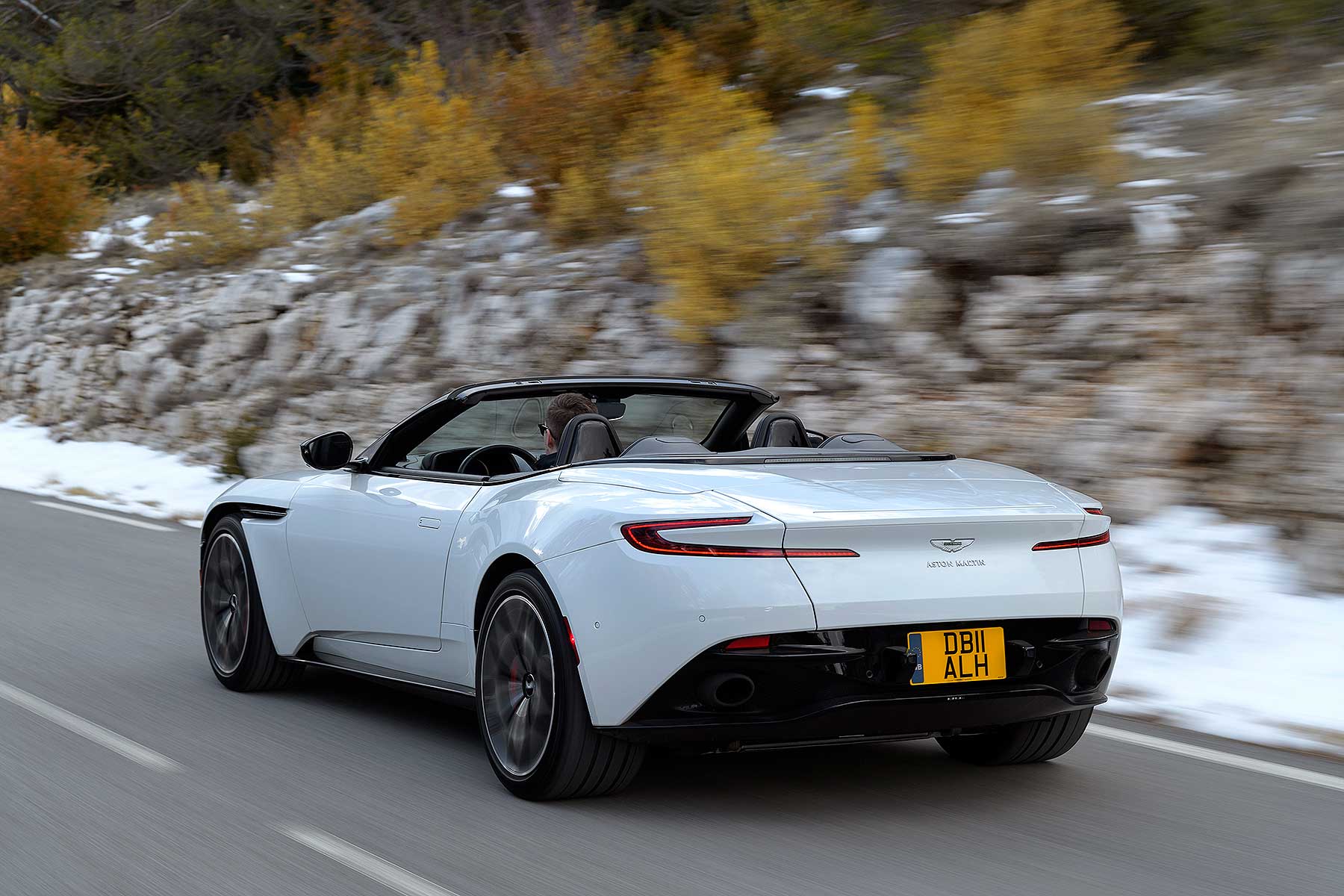 Finally, we were free. Speeds could rise, big paddleshifters flicked down and up. Time for those two cabriolet key tests. One – body shimmer, caused by a loss of rigidity through chopping the roof. Box ticked here. You’ll barely notice it, and only sense a few slight flutters when prompted to notice them. It doesn’t feel like the world’s ending when you clatter a pothole, and there’s no vibration-induced buzz through the rear-view mirror.

Second, cabin wind blast. Again, a surprise: the DB11 Volante is a car you can use roof-down even at motorway speeds, without hairdos getting ruined or bodies being frozen to a chill. Although, proviso time, only with the wind deflector installed and raised, which takes the rear seats out of action. Want to do the same four-up and it’ll be the children acting as your wind deflector. Social services might have something to say about that. 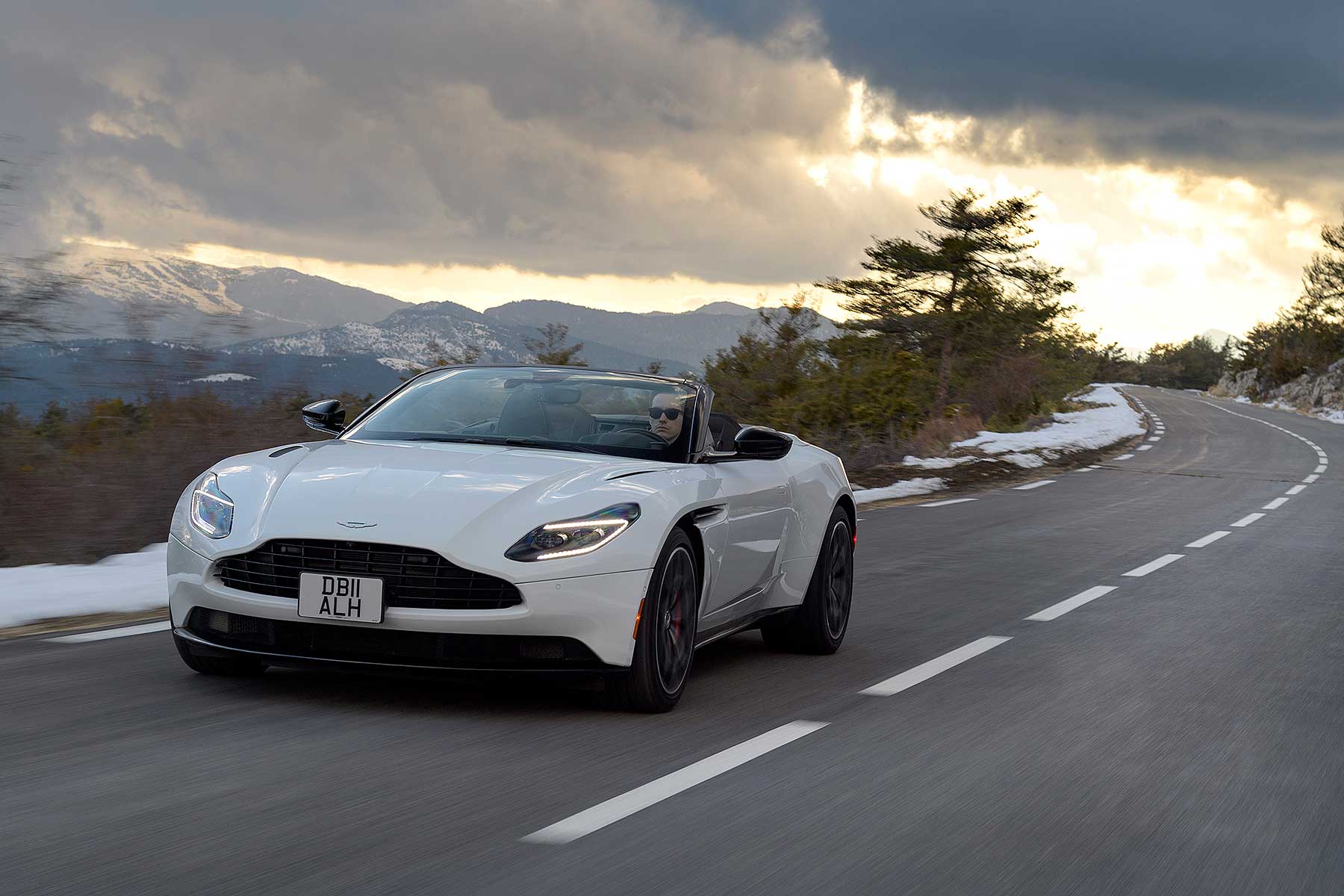 Dynamically, Aston’s objective was to get the Volante to feel as similar as possible to the coupe. Easier said than done; because they’re less rigid, open-top cars often have to be softer than coupes, making them less sharp and incisive. But Aston has achieved its goal with the DB11 Volante. It’s a car just as confident as the hard-top, and pretty well near as crisp, despite weighing over 100kg more (and the coupe isn’t exactly light).

Its tautness encourages you to press on, and its balanced chassis rouses no nasty surprises. Clever damping copes with undulating surfaces without drama and it soon becomes a GT cabrio you can confidently drive like a sports car (while being mindful of its width and size, of course). On winding French mountain roads, I was soon diving into corners, leaning on the rear upon exit: OK, it’s a heavy car so isn’t quite sports car lithe (it’s no McLaren 570S Spider, for example), but you can still be much more effervescent than is the norm in a big GT car.

Turning up the settings to Sport and Sport+ doesn’t destroy the gliding, cushioned ride, but adds useful extra body control. Notably, it still doesn’t turn the exhaust note into a cacophony, either. The DB11 Volante always retains its cultured edge. It’s always so rich and lovely, you really won’t miss the V12. And, with 60mph delivered in around four seconds, it’s not lacking in pace, either. This is an effortless, rewarding and rich car to drive – and, yes, one that’s hard to split from the coupe unless you’re really on it. For most customers, it’s a corruption-free convertible.

Oh, and roof up? As hushed as the coupe, pretty much. The roof is eight layers and does a splendid job of filtering out the exterior hubbub. Add in a cracking sound system and it’s a cushy cruiser. But, thanks to a heated steering wheel, heated seats and well-positioned air vents delivering powerful heat, you’ll only feel the need to raise the roof when it rains, not to escape from the cold: we drove it all morning long in wintery French conditions, with nary a shiver. 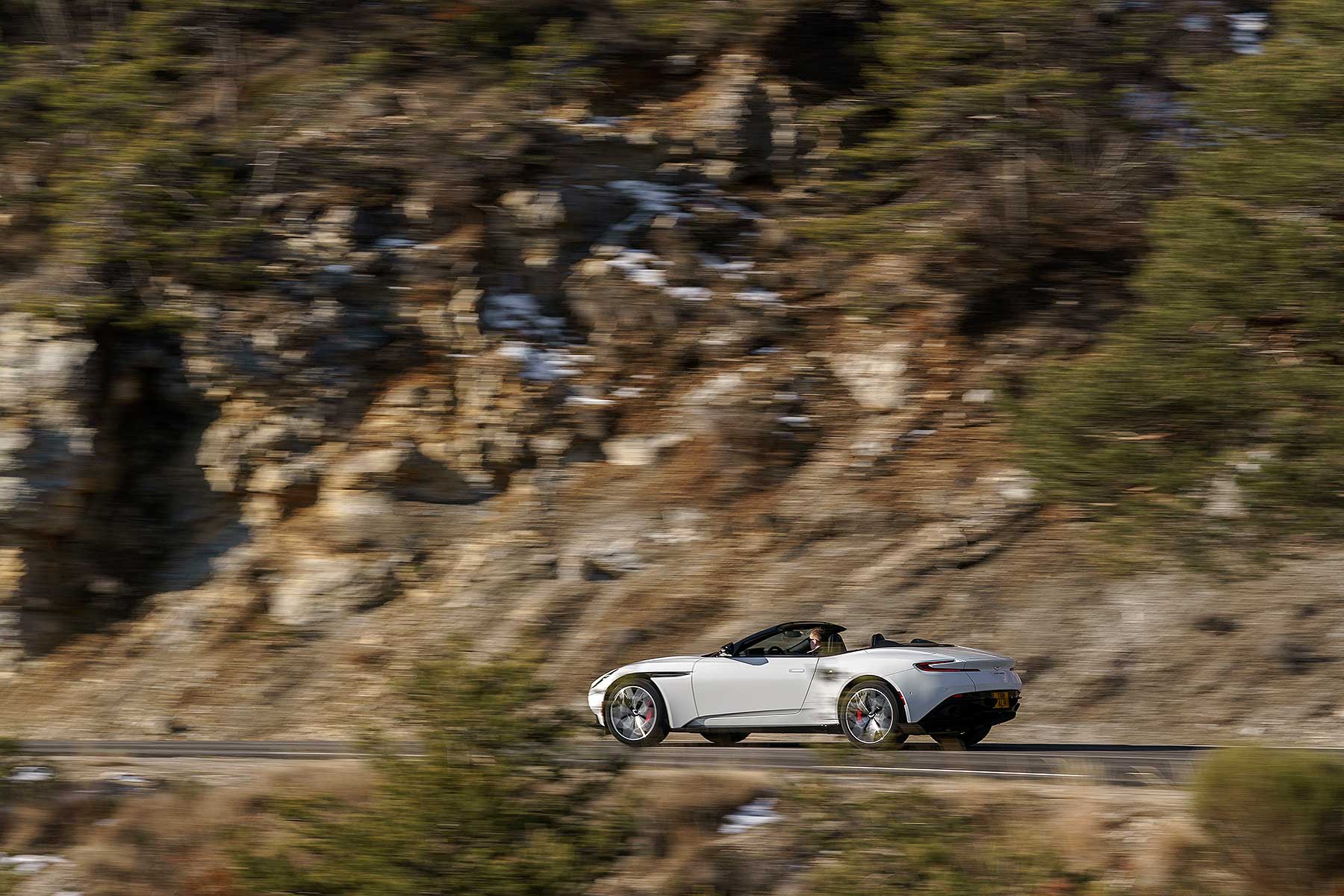 For the first time in memory, I came away from driving the Aston Martin DB11 Volante thinking I would take it over the coupe. I’m not particularly a fan of open-top cars, but this new Aston served up enough open-air treats and V8 melody, and almost none of the associated compromises, to win me over.

You get to experience more V8 richness, more open-air sensations, with few of the traditional open-top drawbacks. The drive is comparable to a coupe and, visually, it’s as classy and uncompromised. For around £12k more than the coupe, it’s going to be an interesting conundrum for more monied Aston buyers than ever.