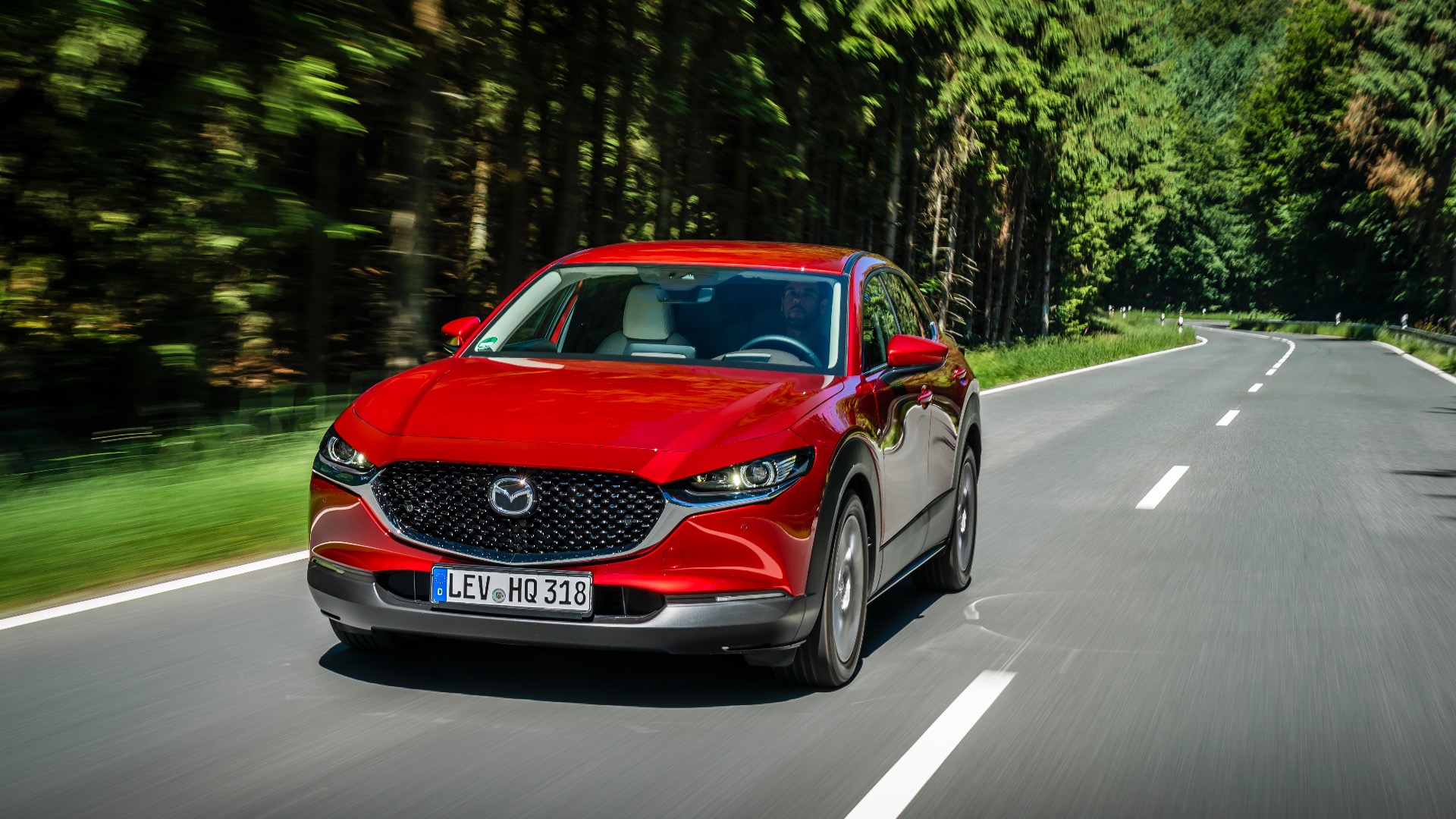 The first rule of car manufacturing in 2019 is that you can never make too many SUVs. So Mazda has slotted a new one into its range; the CX-30 is based on the 3 hatchback and sits half-way between a CX-3 and CX-5. “Why isn’t it called the CX-4, then?” I hear literally some of you ask. Well, there’s already a CX-4 sold in China, plus the number four is considered unlucky in Japan as it sounds like ‘death’. So now you know.

Technically speaking, then, the CX-30 is a crossover rather than a fully-fledged SUV. You can fit two adults in the back, but three is a squeeze, and you’ll need to pack light for a family holiday. Also, while you can opt for four-wheel drive, “you won’t be driving straight up Mont Blanc” (© a Mazda engineer). Rivals include the Nissan Qashqai, Skoda Karoq, BMW X2, Volkswagen T-Roc, Mercedes-Benz GLA and Toyota C-HR. Prices weren’t published at the time of writing, but reckon on £2,000 – £3,000 more than an equivalent Mazda 3 (circa. £20,000 – £31,000). 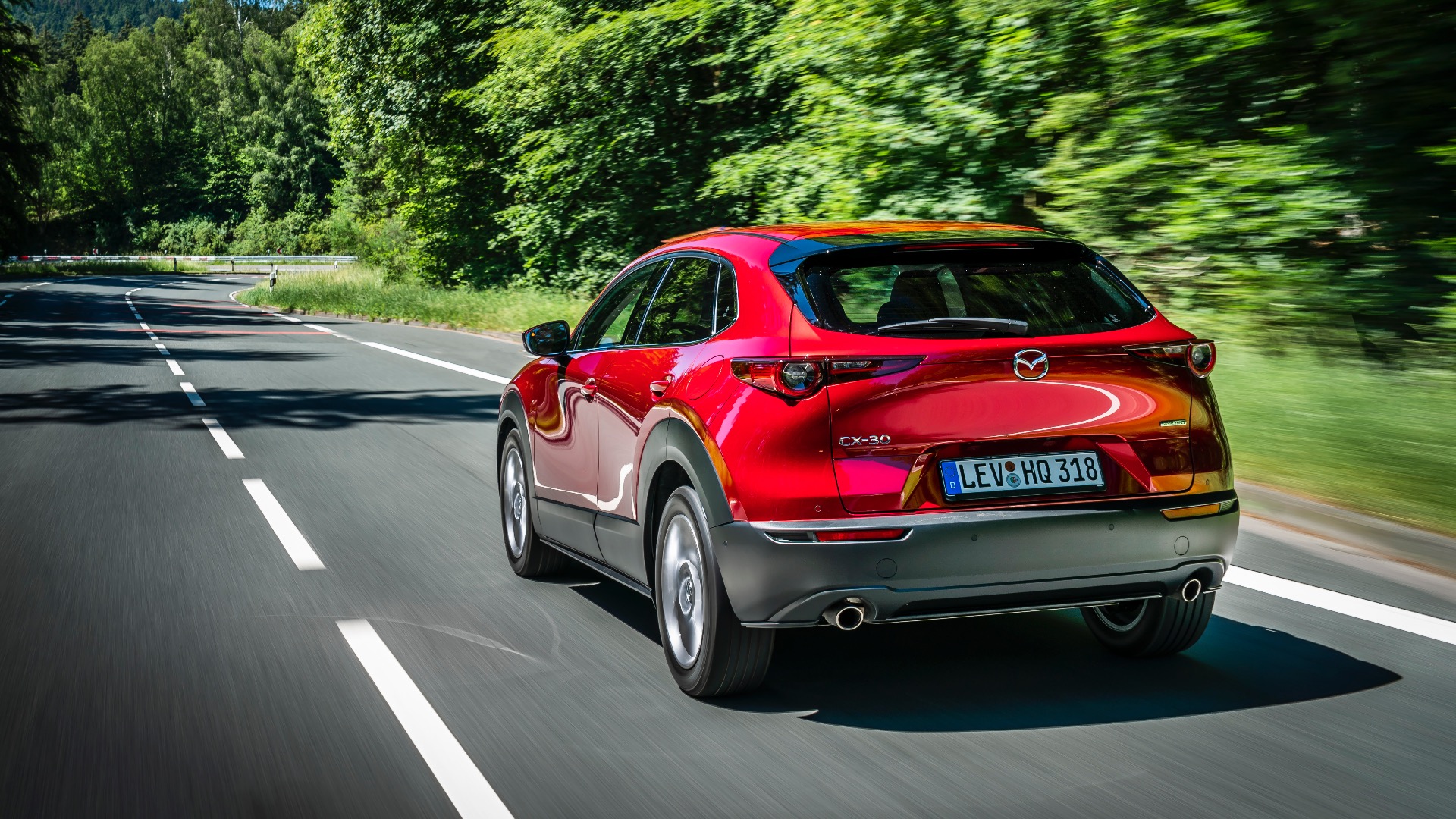 The 3 is hands-down the handsomest car in its class, and some of that magic has rubbed off on the shorter, stumpier CX-30. Despite a lengthy press conference about “sensuously powerful forms” and “brushwork used in Japanese calligraphy”, it’s still a generic SUV shape, but a bold grille, hawkish headlamps and a tailgate spoiler help it stand out – particularly in Mazda’s signature Soul Red. Shame about all the black plastic body cladding.

Engines are shared with the 3, which means a 122hp 2.0-litre petrol with mild-hybrid tech or 116hp 1.8 diesel. The latter will account for a tiny proportion of sales, however. How times have changed… Buyers can choose manual or auto transmissions, both with six speeds, and Mazda’s clever new 180hp 2.0 Skyactiv-X petrol engine is due soon. More on that shortly. 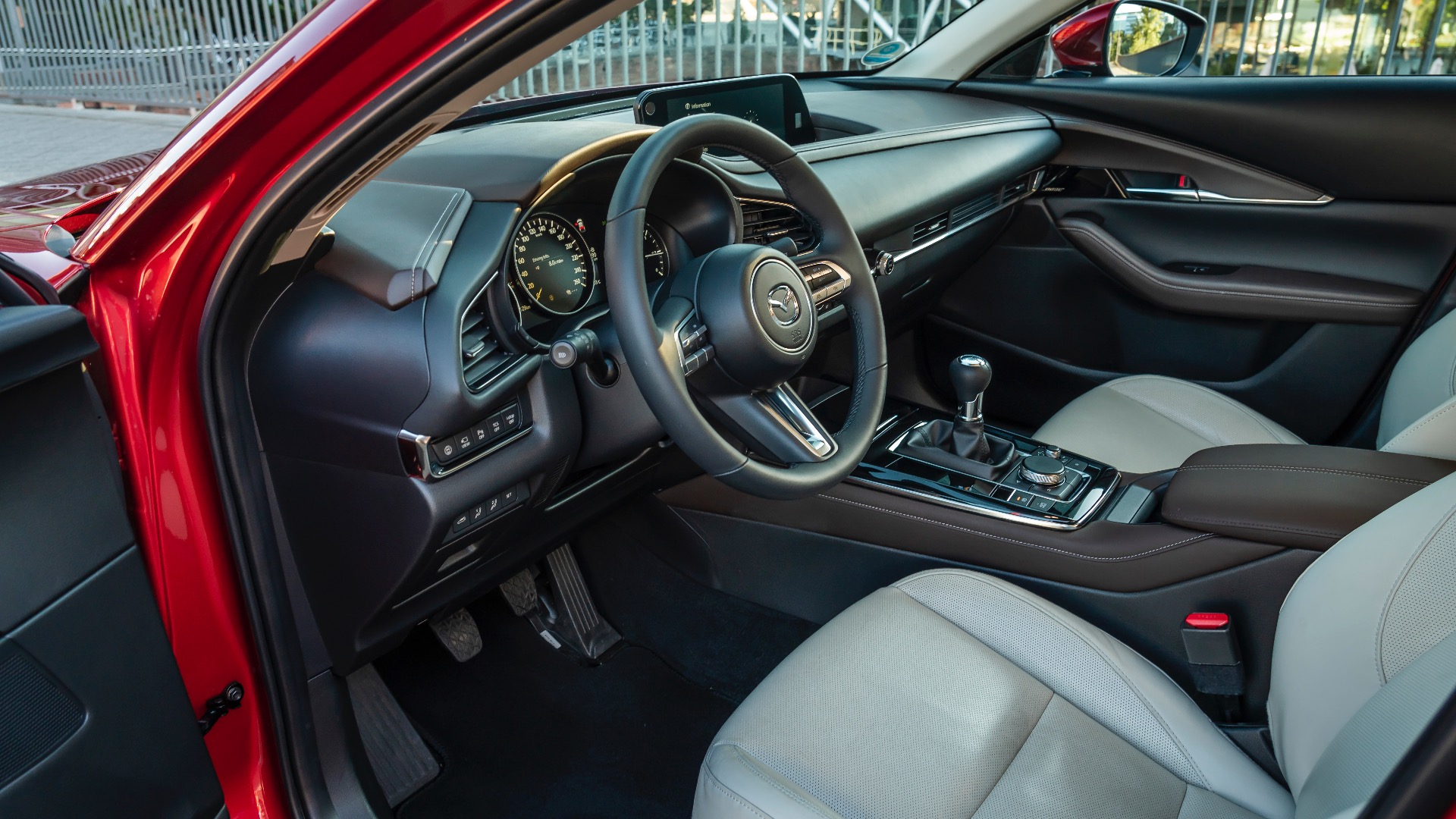 One key goal for the CX-30 – yes, I’m quoting from the press conference again – was “a pleasant time for all”. And it does indeed feel, well… pleasant. Climbing aboard is easier than in a conventional car and the seats are very supportive. It’s decently spacious up-front, too (the distance between the front seats matches the larger CX-5), although the rear is less accommodating – and a little gloomy, thanks to shallow side windows. A 430-litre luggage capacity is identical to a Qashqai and compares with 364 litres for the 3 hatchback.

It’s also pleasingly premium, with soft-touch materials and finely-damped controls. Knurled air-con switches look inspired by Audi, while the 8.8-inch widescreen media system is very BMW. Mazda objects to touchscreens on safety grounds and, using its intuitive ‘Commander control’ to navigate between menus, it’s hard not to concur. Large white-on-black dials, shortcut buttons on the steering wheel and the (optional) head-up display all keep your eyes on the road, too. Apple CarPlay and Android Auto phone connectivity is standard. 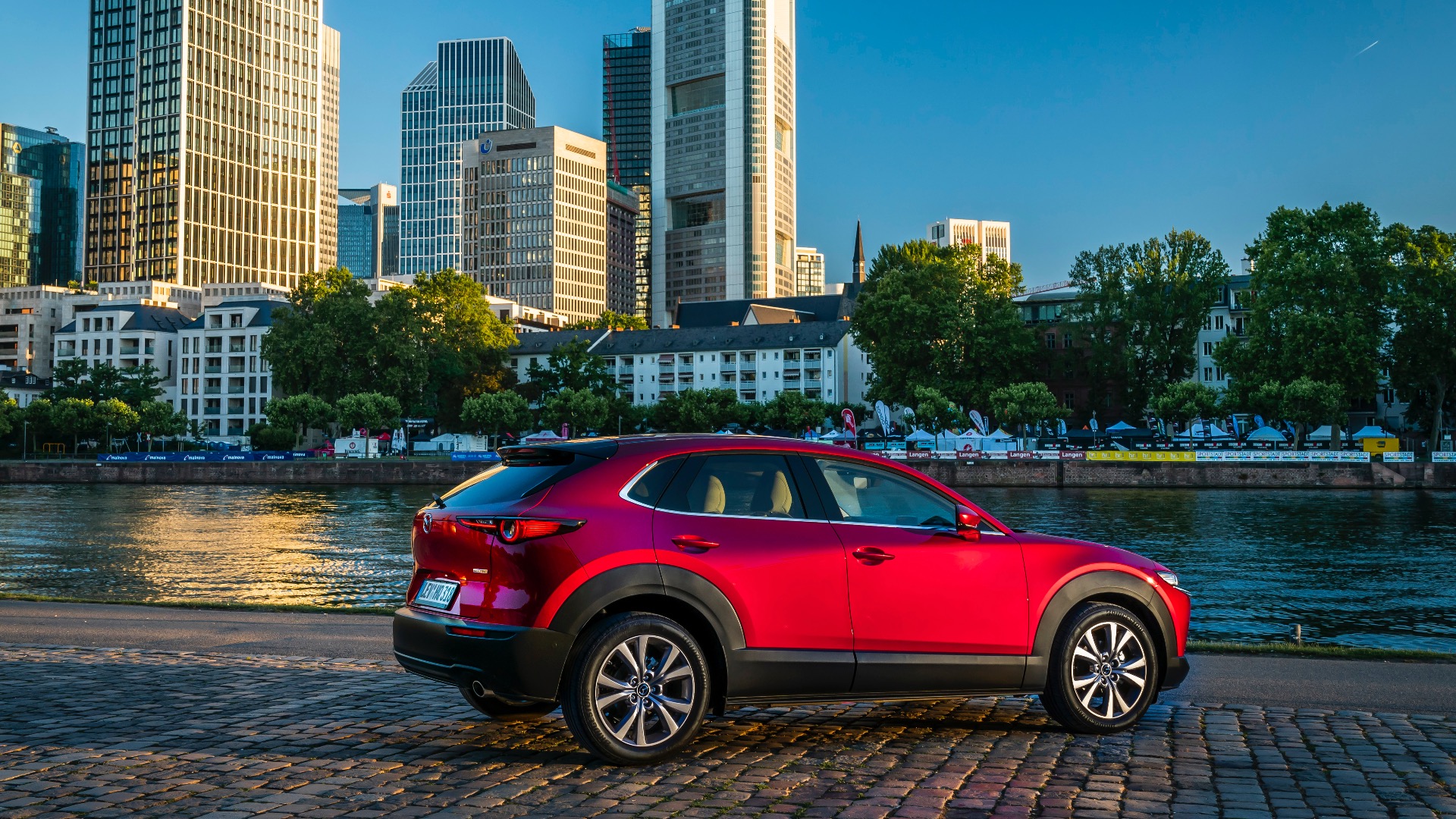 I sampled the 122hp Skyactiv-G petrol auto in front-wheel drive, which lopes to 62mph in 11.2 seconds and returns 42.8mpg and 151g/km CO2 in the new, more rigorous, WLTP test. It handles tidily for a car of this type, turning in keenly with feelsome steering and good body control. The ride was fine on the baby’s-bottom roads of our German test route, although I suspect it could feel fidgety in the UK. It’s no deal-breaker, though.

The Skyactiv-G engine is smooth and unobtrusive, but the gearbox – an old-school torque converter auto, not a modern dual-clutcher – is slow-witted, often hanging on to ratios when it should change up. Mazda didn’t have a manual available at the launch, but its slick-n-snappy ’boxes are the best in the business, so a stick seems the obvious choice. 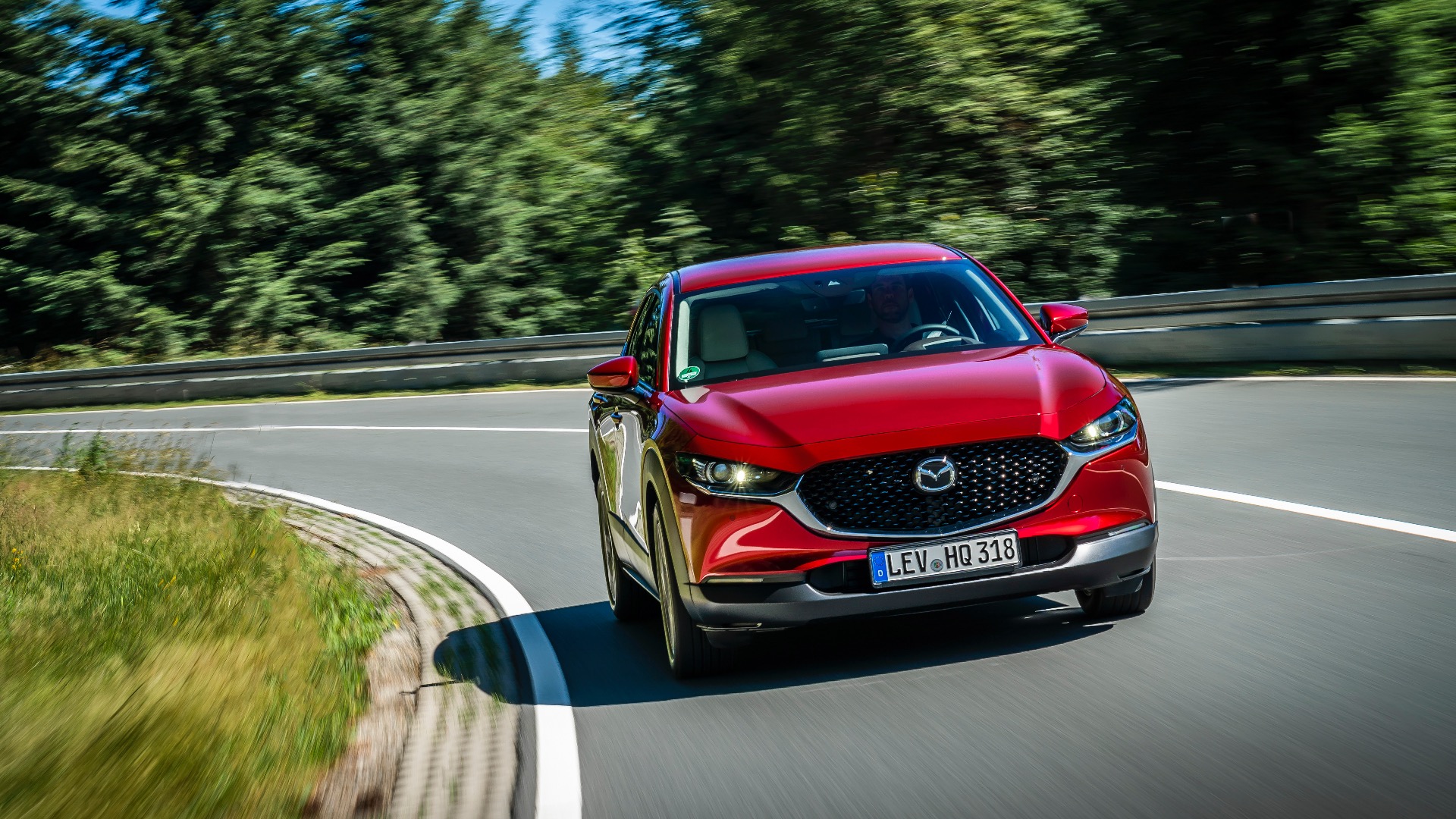 Speaking of choice, I’d hang on for the new Skyactiv-X petrol engine, which I sampled later the same day in a Mazda 3. I’ll spare you most of the technical details: suffice to say it uses both compression ignition (like a diesel) and spark ignition (like a petrol). In theory, that means diesel low-down punch and fuel economy, combined with petrol revviness and throttle response. And guess what? It works. CO2 emissions in the 3 hatch are as low as 100g/km and it feels genuinely lively.

As a car enthusiast, it’s hard not to simply recommend the 3, which more fun to drive, cheaper and only a little less practical. Still, crossovers are what people want, and Mazda reckons this could become its best-selling car, so what do I know? If you desire something medium-sized and SUV-shaped, the CX-30 – assuming prices are competitive – is a well-rounded and worthy choice. 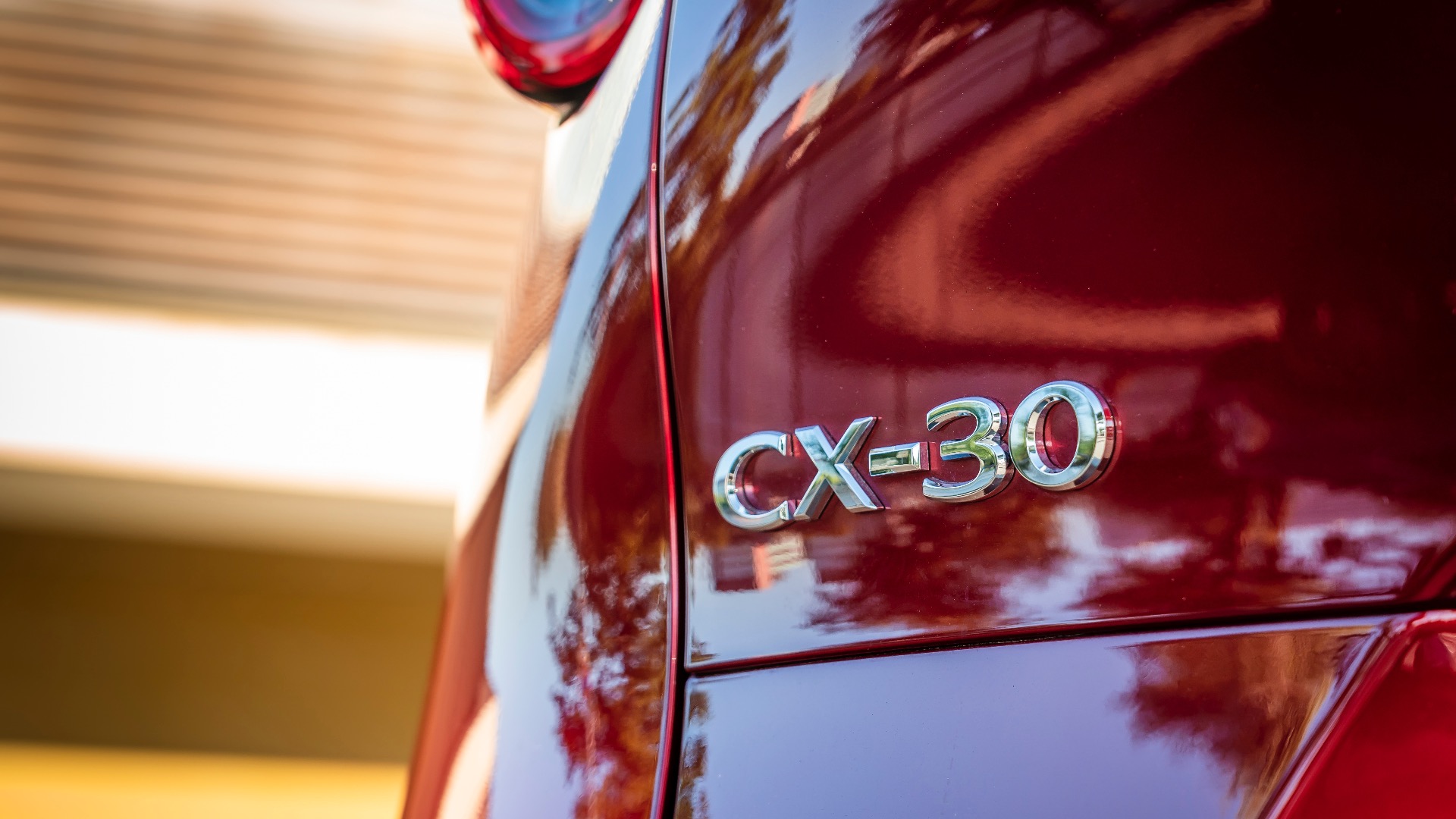