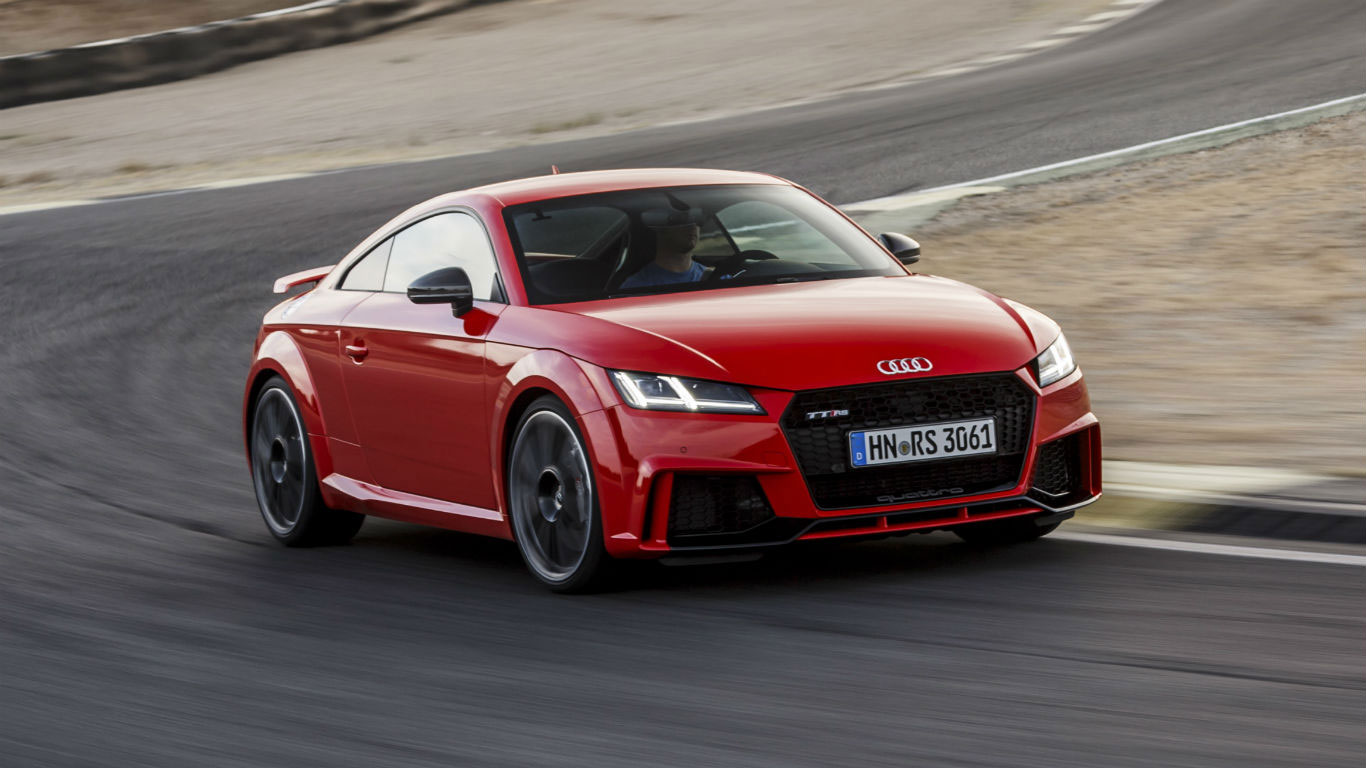 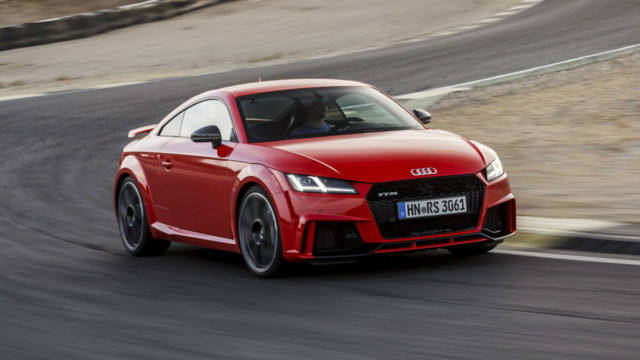 Let’s start with a stat: the new Audi TT RS hits 62mph from standstill in 3.7 seconds. That’s quicker than a Ferrari F40, Porsche 959 or Jaguar XJ220. Indeed, the RS can show a clean pair of Michelins to most supercars built before the millennium. It’s also just 0.2 seconds slower than Audi’s flagship R8. 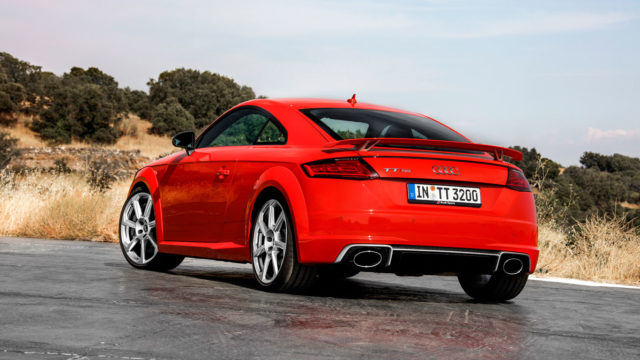 The formula for such savage speed is simple: more power, less weight and, of course, Quattro four-wheel drive. But faster doesn’t always equal more fun, especially when it comes to hot Audis. Is the TT RS a bona fide baby R8, or just a seriously hot hatch? We drove it on-track, then on challenging mountain roads, to find out. 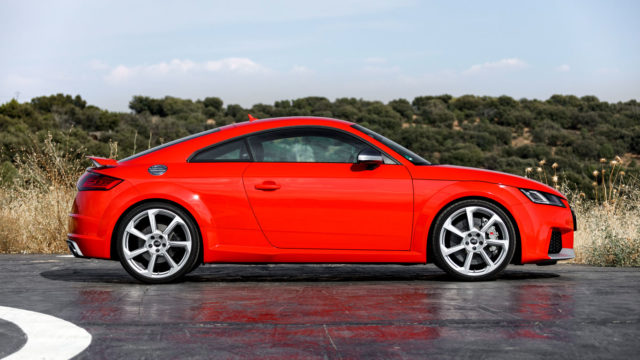 You can order a TT RS from late September, with first deliveries due in November. List price for the Coupe is £51,800, while the Roadster is £53,350. That’s pricier than an equivalent Porsche Cayman S or Boxster S, but still less than half as much as big-brother R8. However, this being an Audi, you’ll probably want to set aside at least £5k for extra-cost options.

Power to the people 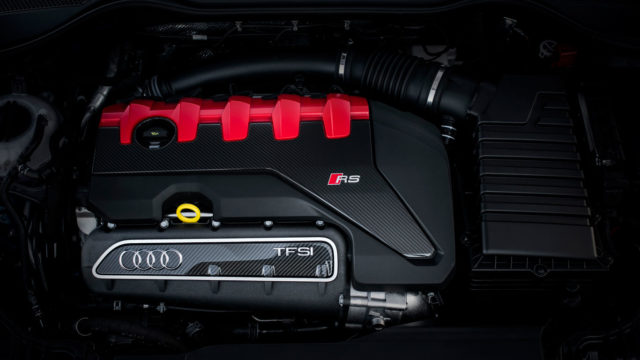 In terms of performance-per-pound, though, the TT looks solid value. Its 2.5-litre, five-cylinder engine pumps out 400hp and 354lb ft of torque: more than even the hottest hatchbacks – the 350hp Ford Focus RS, 381hp Mercedes-AMG A45 and Audi’s own 367hp RS3 included. It also outguns the aforementioned Boxster/Cayman (350hp) and the outgoing TT RS (360hp). 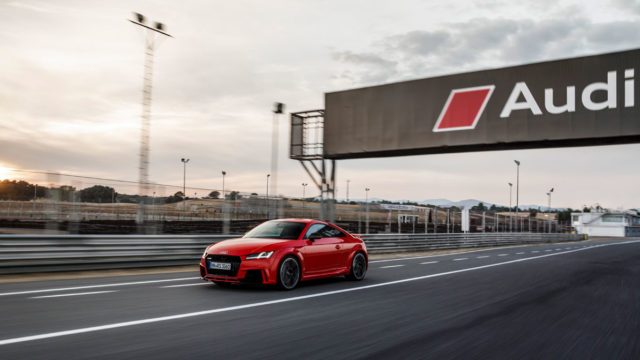 We start our test-drive at Jarama, a fabulous rollercoaster of a racetrack just outside Madrid. Used for Formula One until 1981, it offers a stomach-churning blend of blind apexes, off-camber corners and (gulp) short run-offs. It’s the perfect place to put the TT RS through its paces. 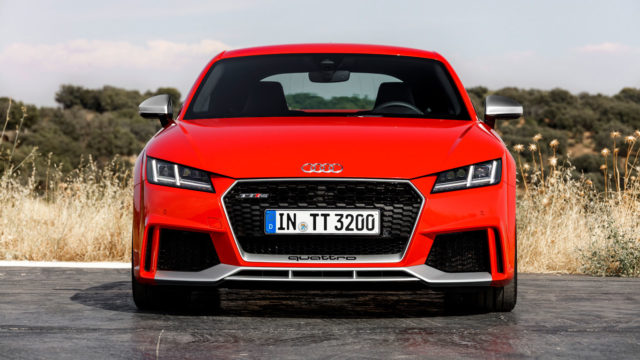 First, though, we line up to try the Launch Control – the easiest way to achieve that headline 3.7sec sprint to 62mph. And it really couldn’t be easier: floor the right pedal, left foot off the brake and – wham! – the RS rockets down the main straight. It clouts you in the back and strains your neck muscles; the sheer ferocity of its acceleration is startling. God only knows what these full-bore starts do to the clutch. 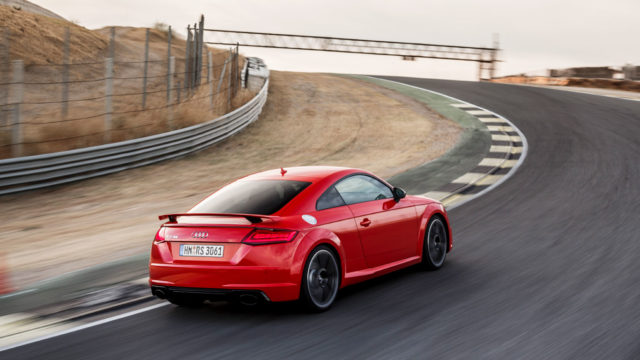 Still, there’s more to life than straight-line speed. And if the TT RS is truly the pint-size R8 we’re hoping for, it needs to be just as fleet-footed in the corners. Good thing we’re on a racetrack, then. 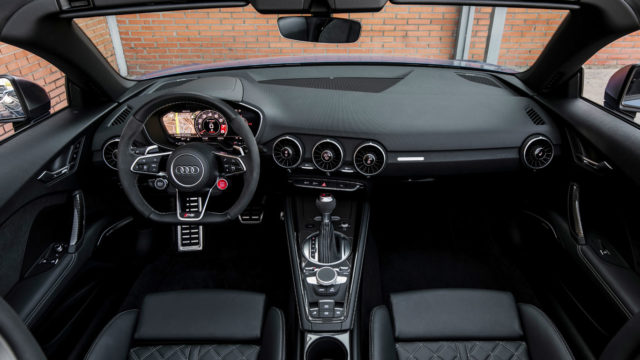 One immediate similarity with the R8 is the new steering wheel. Compact, flat-bottomed and Alcantara-wrapped, it adds an authentic motorsport feel – particularly with the new ‘satellite’ buttons for engine start/stop and switching drive modes. Shame you can’t have a manual gearbox as well; the RS comes with a seven-speed S tronic semi-automatic only. 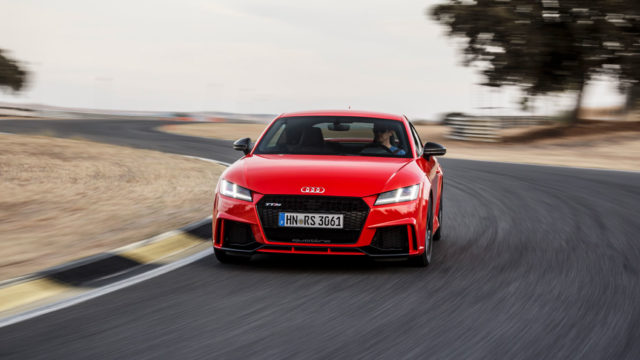 Heading into turn one – a hairpin right-hander – the Audi’s steering feels light and responsive. There’s barely any body-roll as the front tyres bite and Quattro four-wheel traction catapults us towards the next corner. Scything effortlessly through a tightening corkscrew, then a flat-out, uphill left-hander, the RS feels utterly planted. It simply grips and goes. 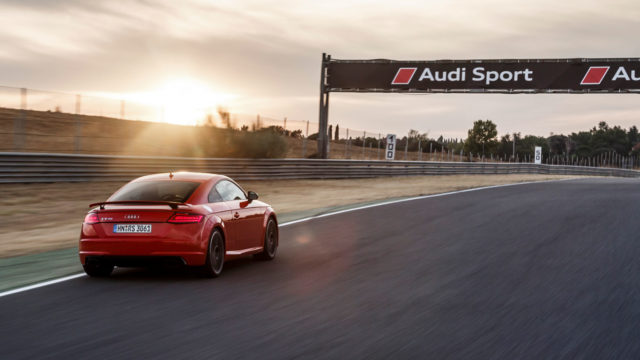 As our confidence grows, we push harder, but the TT RS stubbornly refuses to be provoked. Even as grip turns to slip, it remains remarkably neutral. The juddering understeer of Audis past is just that: a thing of the past. 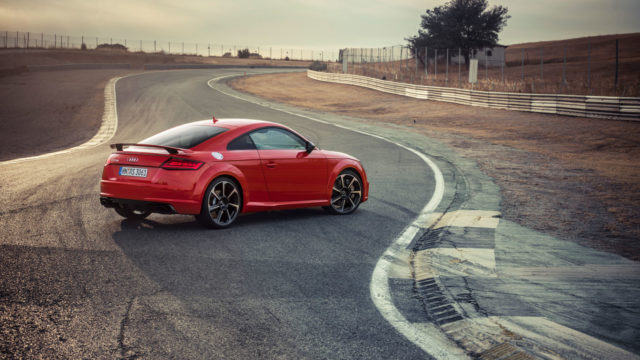 We return to the pitlane with the smell of scorched rubber seeping through the air vents and smoke pouring off the (optional) ceramic front brake discs. Clearly, the TT RS is an easy car to drive very fast. But it’s almost too capable on-track, lacking the poise and throttle-adjustability of a good rear-driver. Perhaps it will be more rewarding on the road. 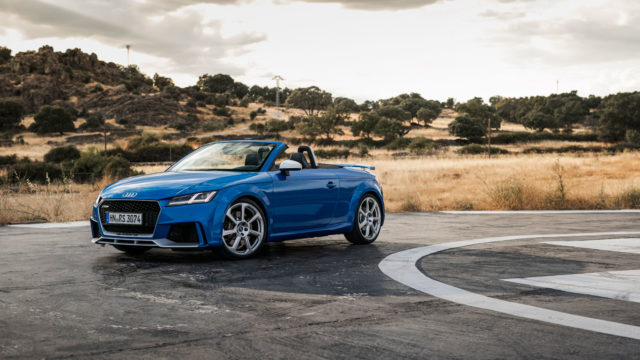 We swap into a Roadster for a drive into the Iberian countryside. The drop-top is 0.2sec slower to 62mph than the Coupe, but the chance to soak up some Spanish sun seems ample compensation. Besides, the TT RS looks even better with no roof. Hawkish headlights and a gaping grille with ‘Quattro’ lettering provide plenty of rear-view-mirror presence, while twin tailpipes and a fixed rear wing beef up the back end. 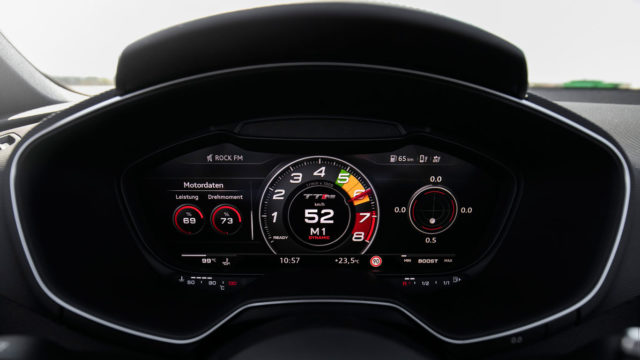 The TT’s exterior is simply an amuse bouche before the main course of its cabin, however. Stylish, ergonomically excellent and beautifully built, it’s one of the finest interiors of any car on sale. The centrepiece is Audi’s digital ‘Virtual Cockpit’, which takes the place of traditional dials behind the steering wheel. Standard-fit on the TT, the RS has an additional screen with a central rev counter and readouts for torque, tyre pressures, G-forces and other such geekery.

Cramped in the back 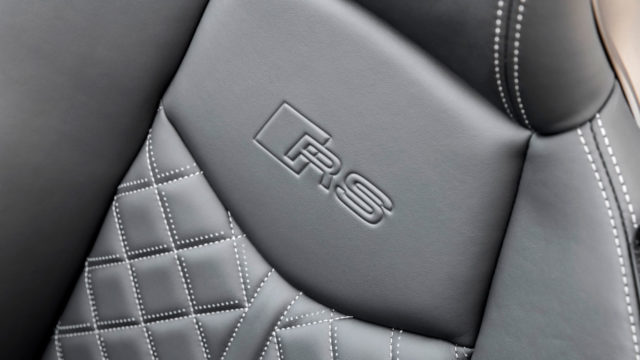 You also get Audi’s excellent MMI Navigation system, subtle LED interior lighting and gorgeous quilted leather sports seats. Not that these offer much comfort if you’re seated in the rear. If you thought a Porsche 911 felt cramped, this is the next level of back-bending, neck-cricking claustrophobia. Our advice: consider the back seats a useful extension of the boot. 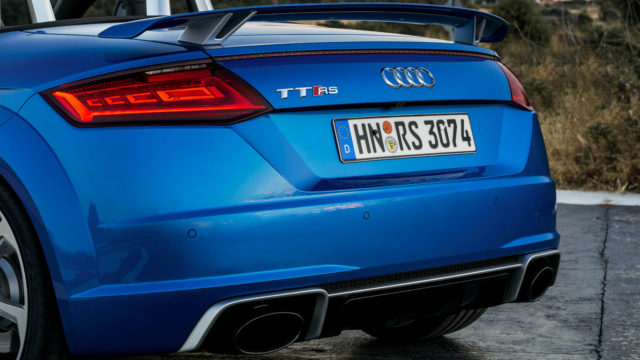 Talking practicality, we should also mention fuel economy: a claimed 34.4 mpg for the Coupe, with CO2 emissions of 187g/km (Roadster: 34.0mpg and 189g/km). Hardly ground-breaking figures, but at least strong residual values – 43% of list price retained after three years/60,000 miles, according to CAP – keep overall running costs down.

Filth and the fury 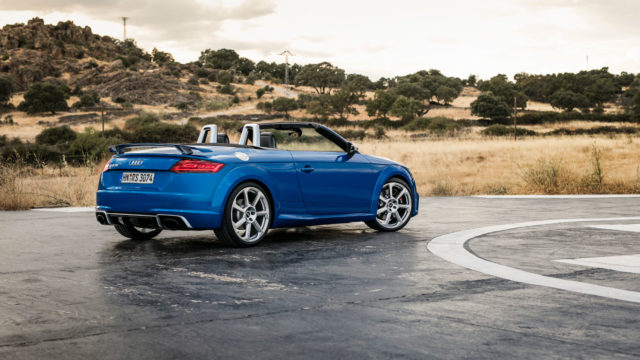 We press the red start button and the TT’s five-cylinder engine – an Audi RS trademark dating back to the original 1994 RS2 – erupts into life. Its pulsating growl, which swells into a hard-edged snarl as the revs rise, is amplified by the lack of a roof. With the exhaust in sport mode, it sounds downright filthy. 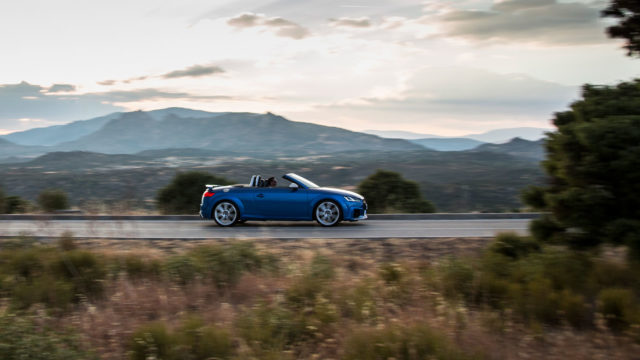 Leaving Jarama, the TS RS jolts over speed humps and jitters across broken Tarmac. The optional 20-inch wheels on our test car doubtless don’t help (19s are standard), but there’s no escaping that firm, borderline-uncomfortable ride. 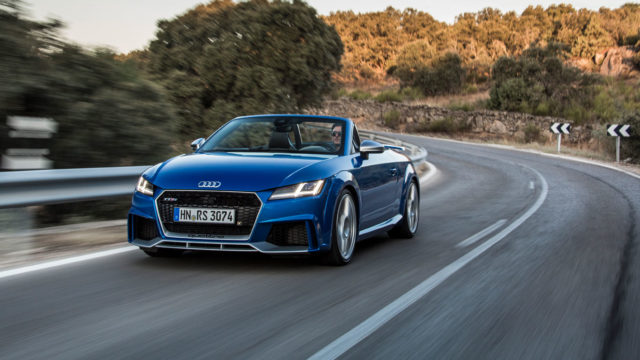 The pay-off comes as we head into the hills, switching Drive Select to Dynamic and changing gear manually using the paddles behind the wheel. On sinuous switchbacks that snake through rock-strewn valleys, the uber-TT feels in its element. Magnetic Ride adaptive dampers (another option, naturally) hunker it down deliciously, before another huge slug of turbocharged torque blasts us between the bends. It’s deft and controlled, yet utterly explosive.

Redeemed on the road 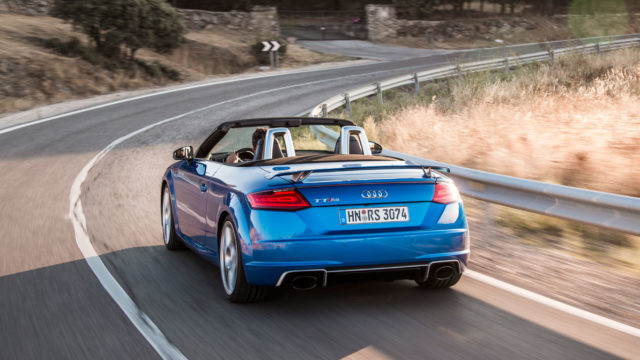 Phew. With exhausts ticking furiously in the heat, we park the TT RS back at Jarama and reluctantly return the keys. After a slightly underwhelming session on-track, the Audi has redeemed itself on the road. Where some RS-badged Audis – latest RS3 included – feel aloof, the TT RS comes alive. It’s a car you’ll genuinely enjoy driving, over and over again.

Porsche is our pick 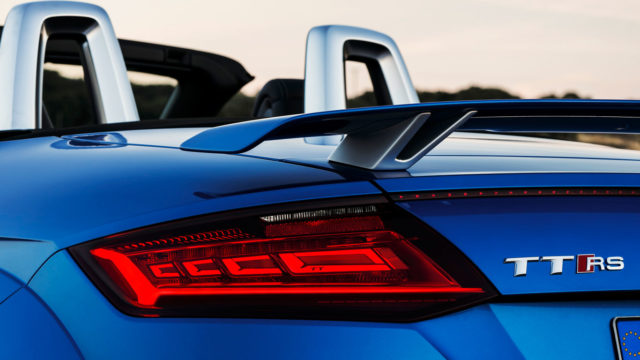 However, there is a hulking Porsche-shaped elephant in the room, and its name is 718 Boxster/Cayman. We spent a week with a Cayman S shortly before the TT launch and there’s no question which German sports car we’d spend our (sadly, theoretical) £50k on. Despite reservations about its new, four-cylinder engine, the Porsche is a simpler, purer sports car – and all the better for that.

A kind of magic 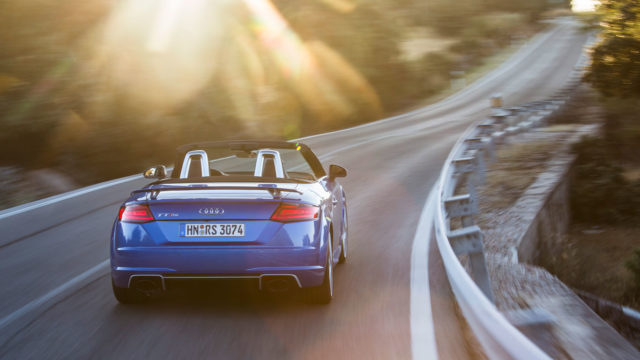 Not convinced? We can agree to disagree. After all, the Audi is quicker, more powerful, better looking, nicer to sit in and will be more exclusive. It even has rear seats… sort of. But in those rare moments when the traffic clears, your focus sharpens and the road becomes a ribbon to be reeled-in, the Audi is merely memorable. The Porsche? It’s magic.