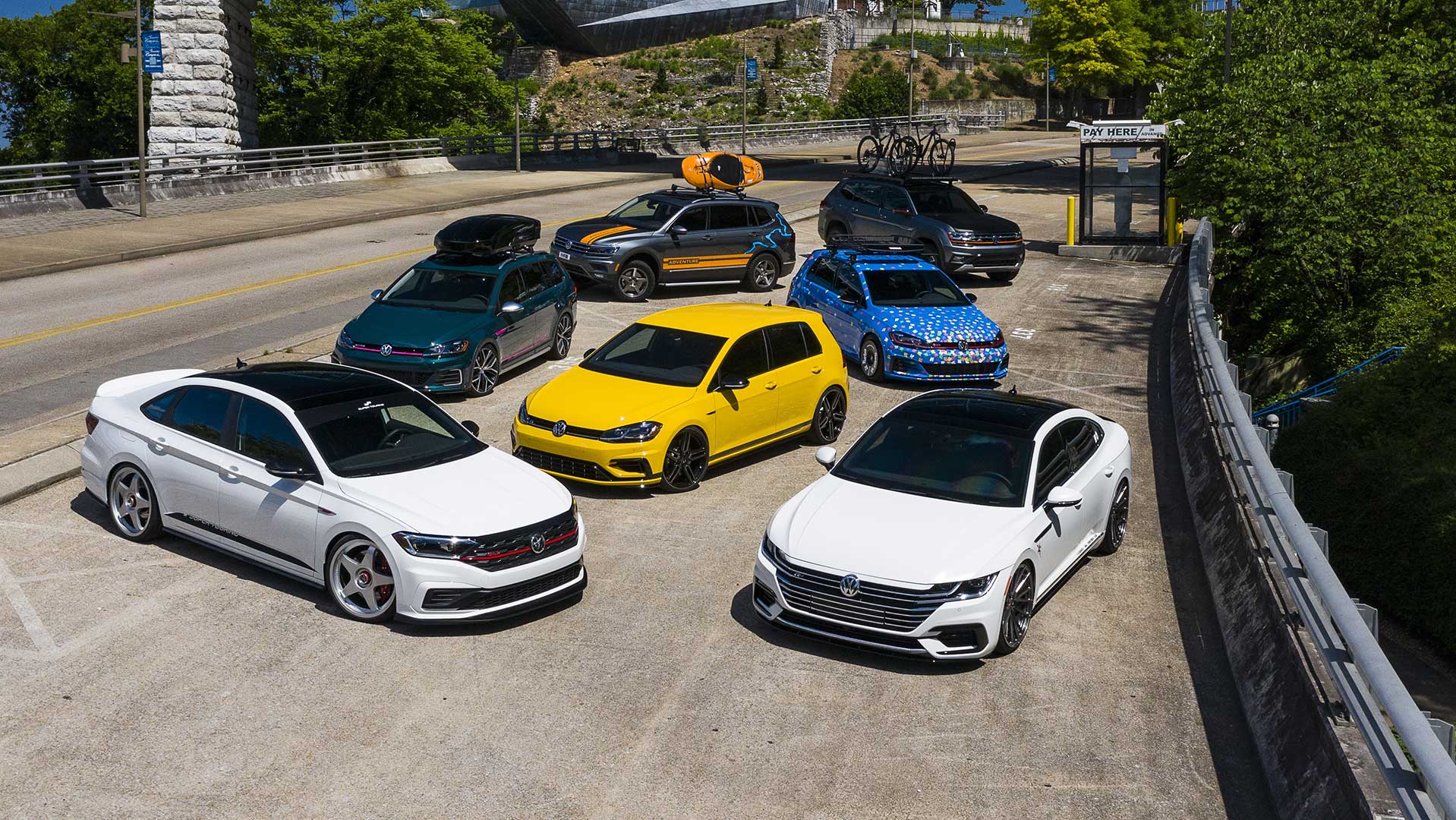 Summer is almost here and, for thousands of Volkswagen fans across America, that means the chance to show off their cars at major events.

Volkswagen of America makes a substantial commitment to attending the biggest shows, and will be bringing a fleet of seven production-based concept cars on tour this year.

From hot hatchbacks to SUVs, we have taken a look at the collection of vehicles VeeDub fans should keep a look out for this show season. 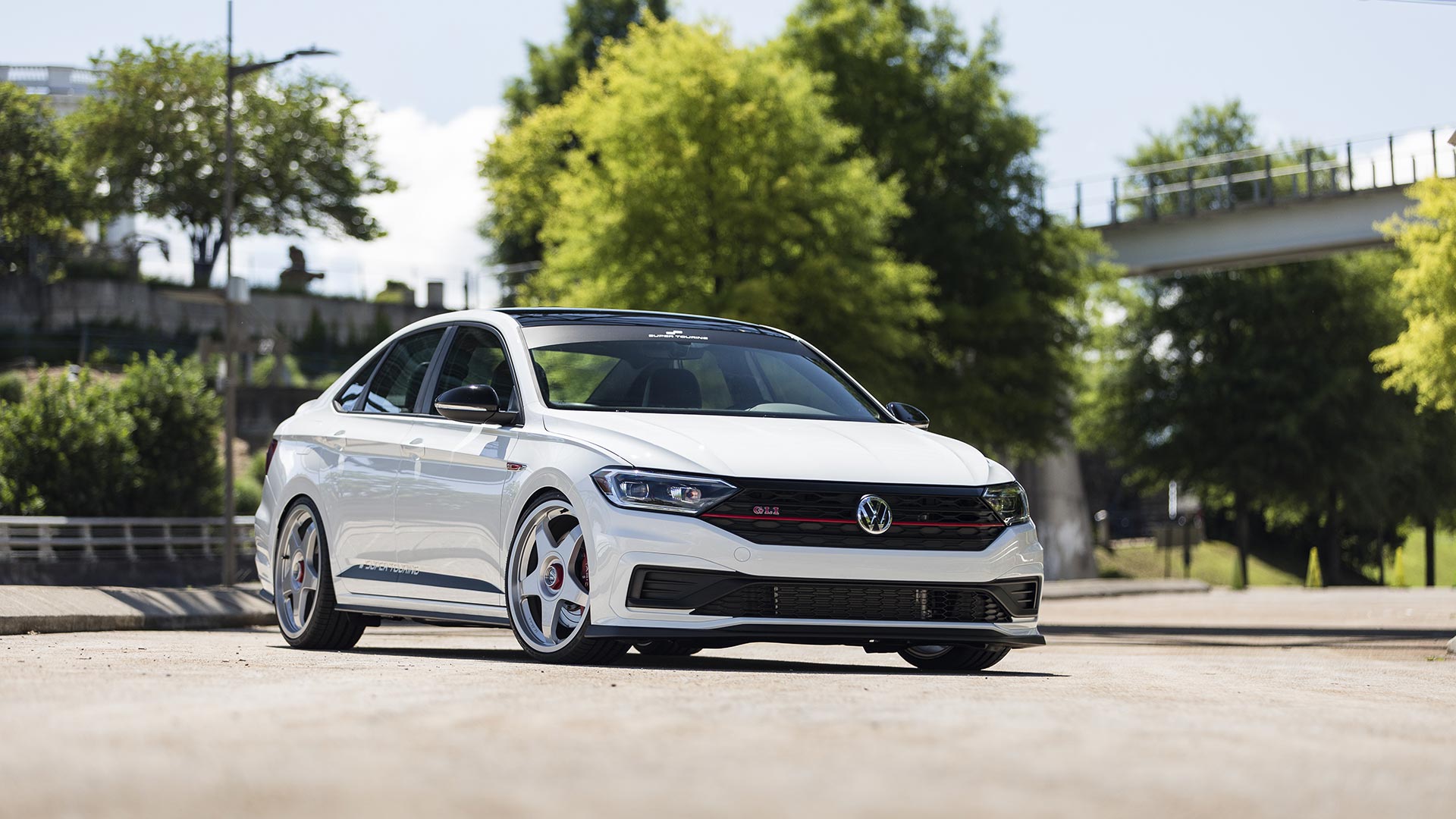 The new Jetta GLI caused a storm when it launched at the Chicago Auto Show earlier this year. It is the most powerful production GLI ever, producing 228 horsepower and 258lb-ft of torque from its 2.0-litre TSI engine.

With 1990s culture bang on trend at the moment, it seems fitting that VW has opted to mimic the heyday of touring car racing with the GLI Super Touring Concept. K&W coilover suspension helps slam it to the ground, with a new spoiler, bigger brakes, and performance exhaust also added.

A major talking point is the set of brand-new 19-inch Fifteen52 alloy wheels, which are making their American debut attached to this Jetta GLI Autobahn. 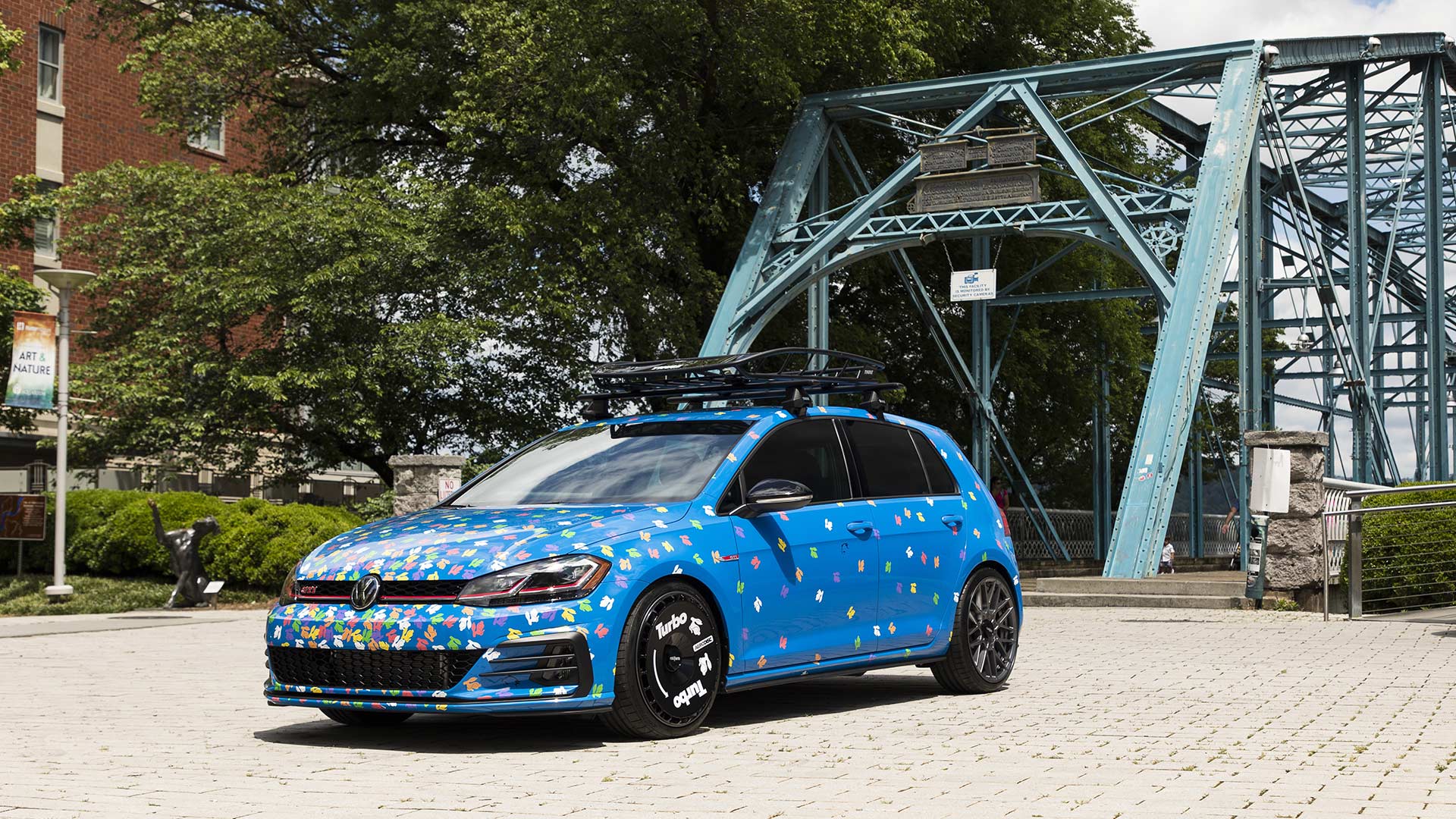 Volkswagen released the Rabbit Edition of the GTI hot hatch for the 2019 model year, and that car serves as the base for this concept.

A special vinyl wrap sees Rabbit logos in multiple hues sprinkled, like confetti, across the bodywork of the GTI. VW also notes that the wrap contains a ‘hidden surprise’ for fans to try and find. 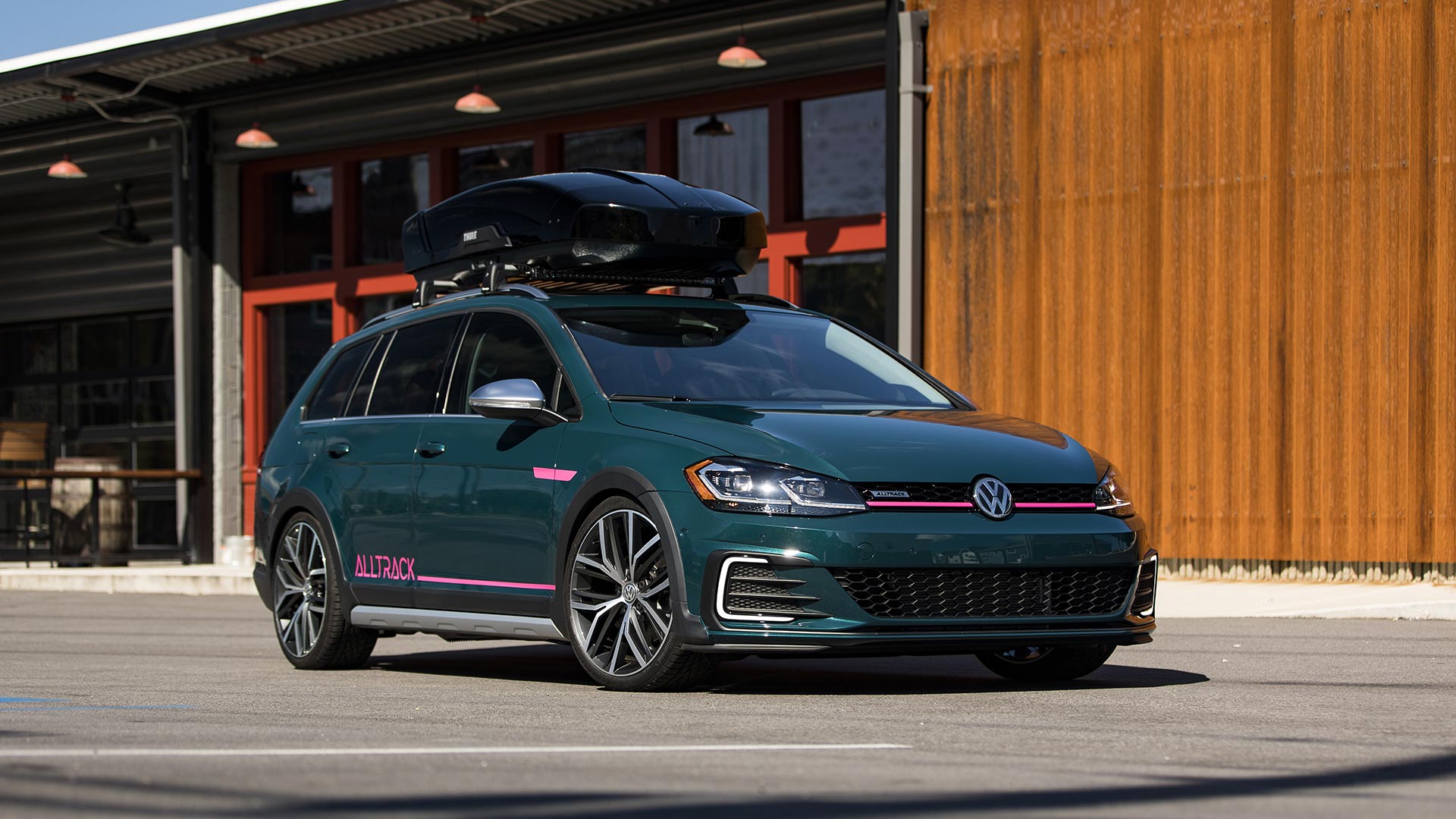 Using the Alltrack wagon will undoubtedly endear the Combi Concept with VW enthusiasts. But the Volkswagen Technical Service Center in Auburn Hills, Michigan has gone even further with a mixture of different parts.

A front bumper from a Golf GTE meets a rear spoiler from a GTI Rabbit Edition. The short-throw shifter comes from a diesel Golf GTD, whilst H&R supply the lowering springs.

Most noticeable are the continuing theme of the 1990s-inspired retro graphics which stand out against the dark paintwork. The Volkswagen roof bars also incorporate an LED light bar, and support a Thule cargo box. 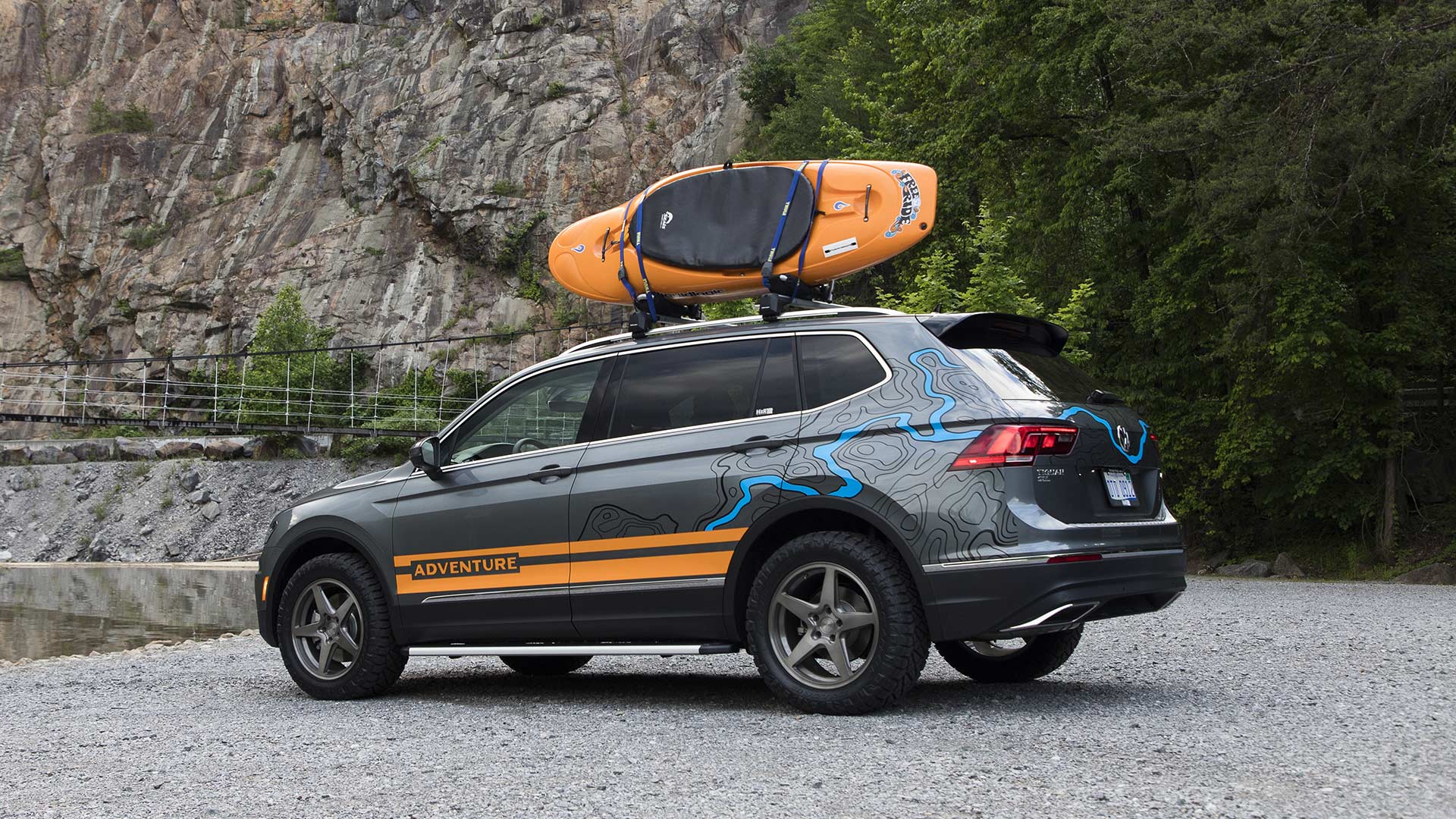 Unlike most of the other vehicles in the 2019 Concept collection, the Tiguan Adventure features raised, rather than lowered, suspension.

Volkswagen has also gone to town with official accessories, including Monster Mats, rear protection plates, side steps, and roof bars carrying a Kayak. 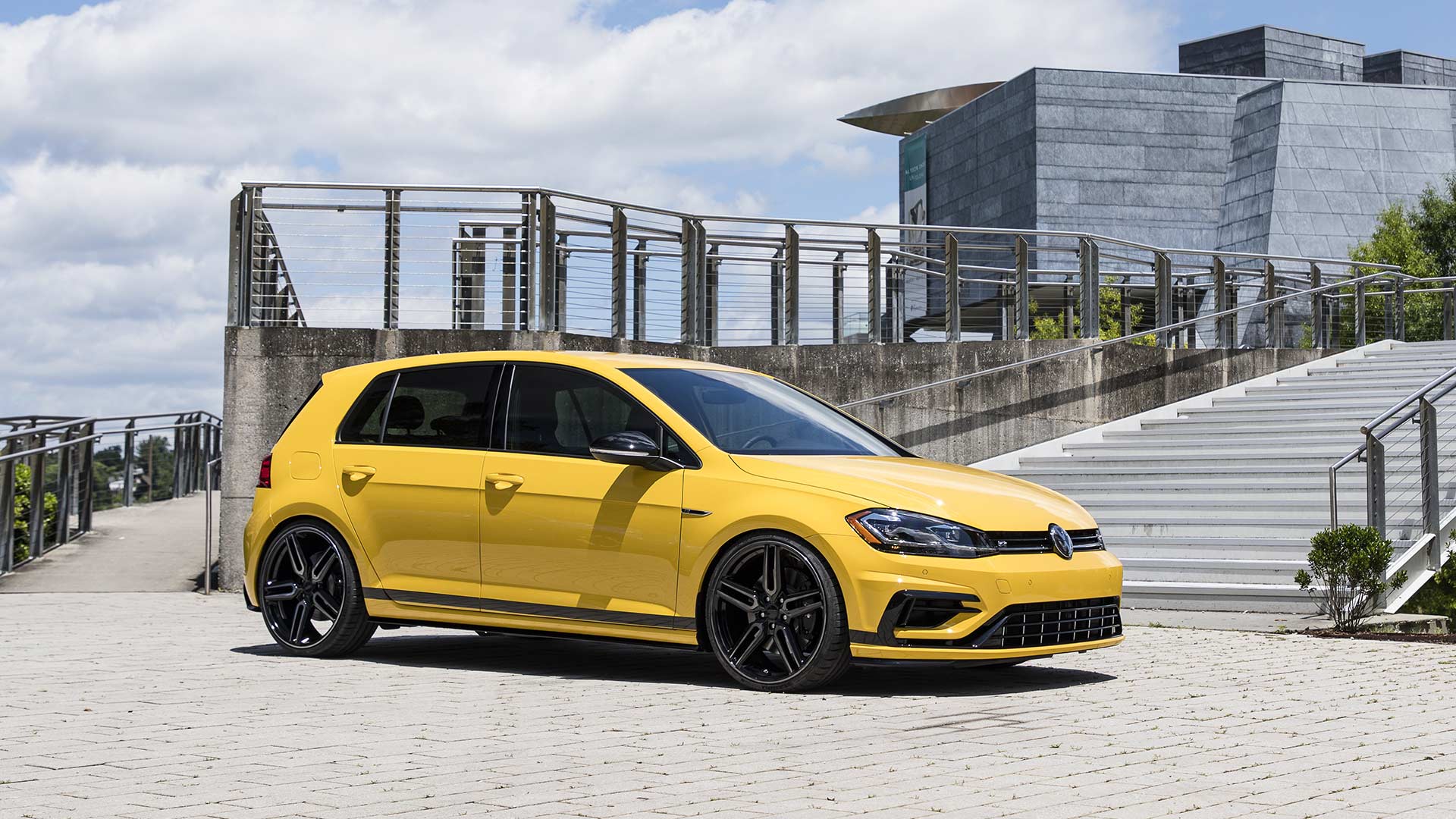 For the 2019 model year, Volkswagen now offers the potent Golf R hot hatch in a range of custom paint choices as part of the Spektrum package.

A total of 40 different paint options form part of the Spektrum offering, with many of them heritage hues from Volkswagen’s back catalogue of greatest hits.

VW has painted this Golf R in classic Ginster Yellow, and it also features the inevitable H&R lowering springs. A set of 20-inch Vossen Hybrid Forged HF-1 wheels add some contrast, along with special decals running along the side sills. 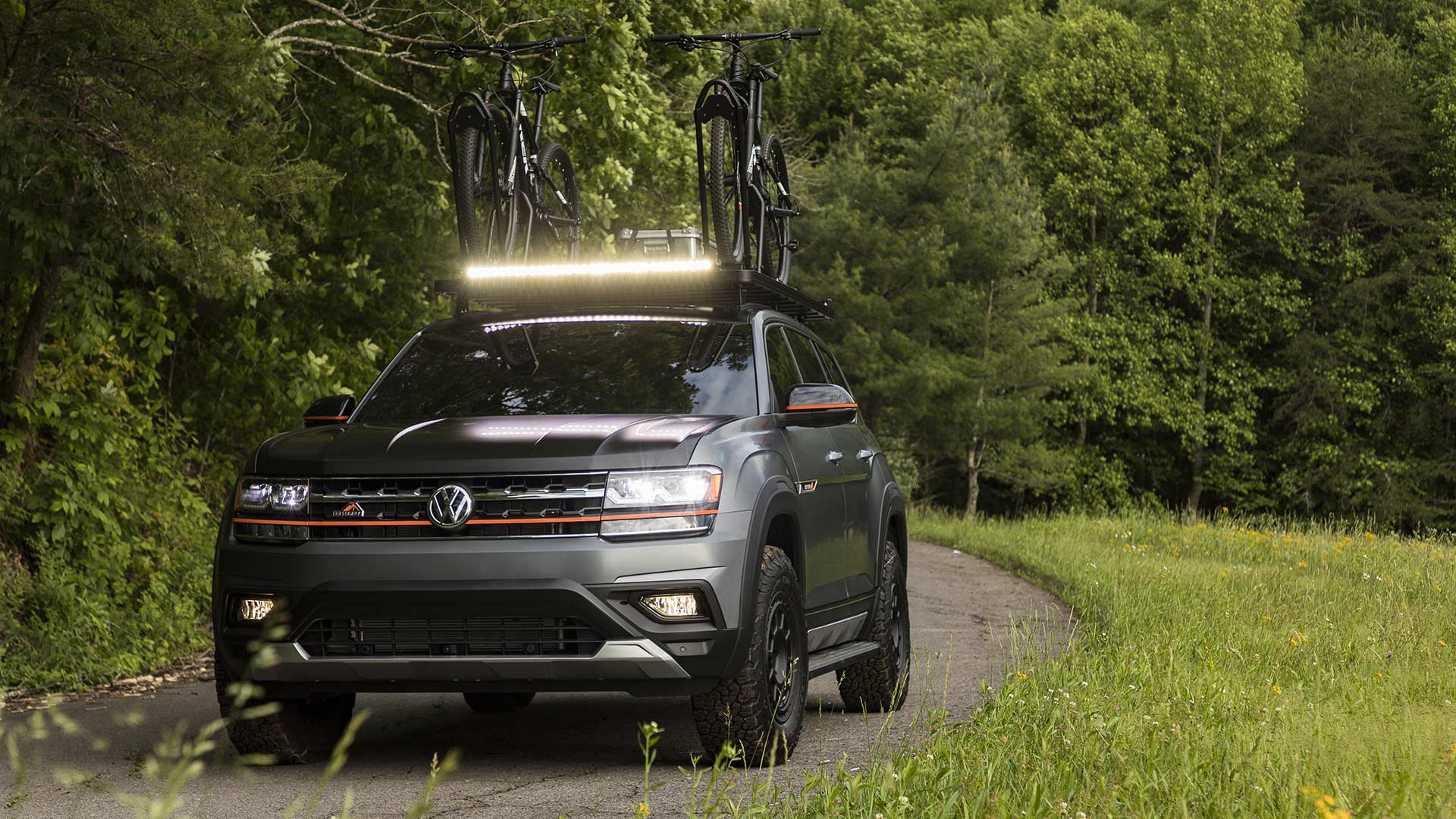 The substantial three-row Atlas SUV has proven to be a popular product for Volkswagen, with the plant in Chattanooga, Tennessee churning out big numbers of them.

However, this concept is the work of Alex Earle, Exterior Design Manager at the Volkswagen Design Center California, who wanted to build the best Atlas for extreme mountain biking. 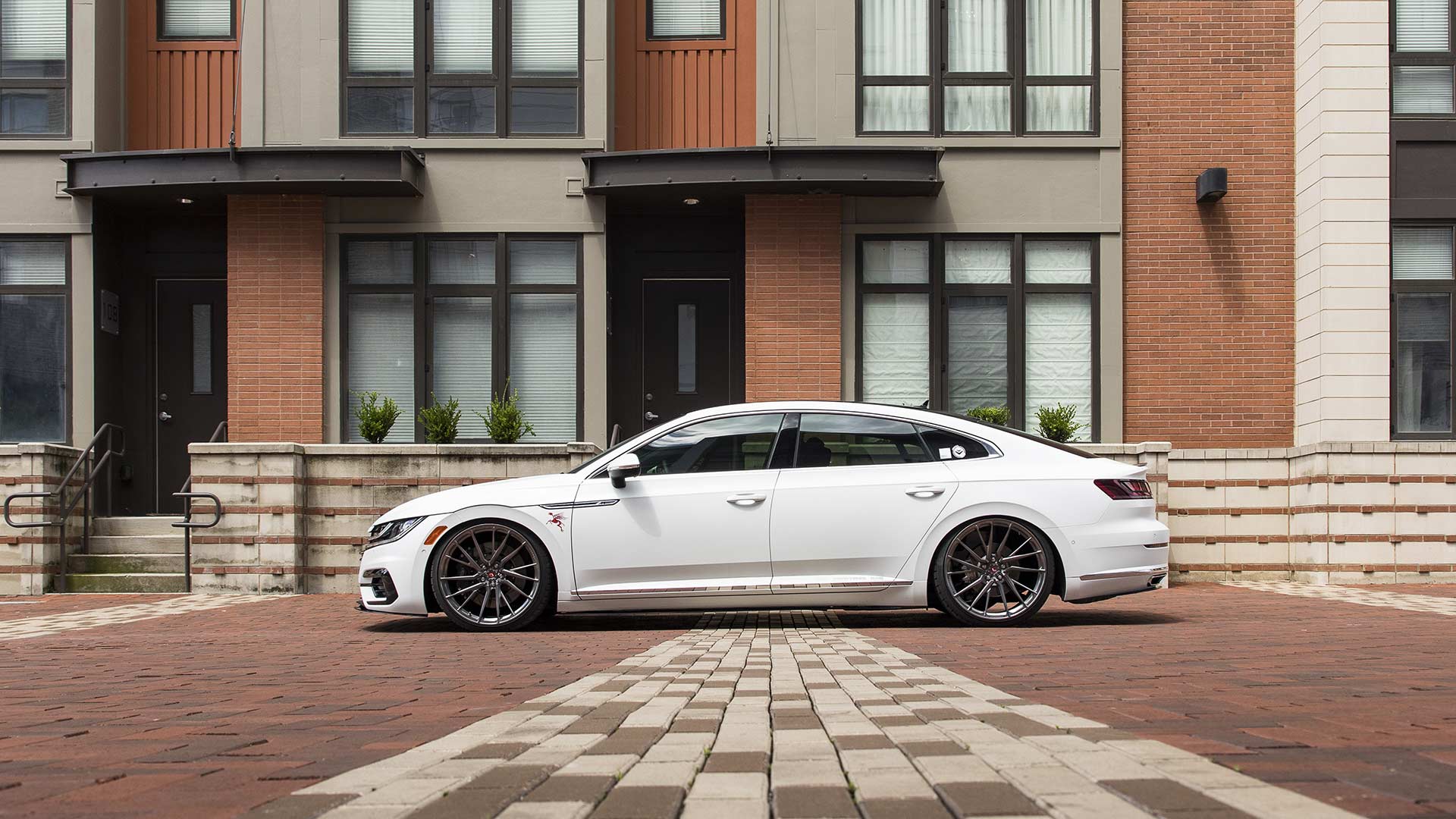 Finally, Volkswagen is also taking the modified Arteon four-door coupe from the 2018 SEMA Show on the road. Developed with Vossen wheels, a set of 21-inch Vossen Forged M-X4T wheels are the most significant part of the upgrades.

The Pure White paint wears a satin protection film, and the Arteon also features H&R Ultra Low coilover suspension to drop it closer to the ground by 3 inches. A big brake kit and custom body kit was added after the SEMA event.

Volkswagen fans wanting to check out the seven cars in more detail should head to one of these eight events throughout the summer of 2019: