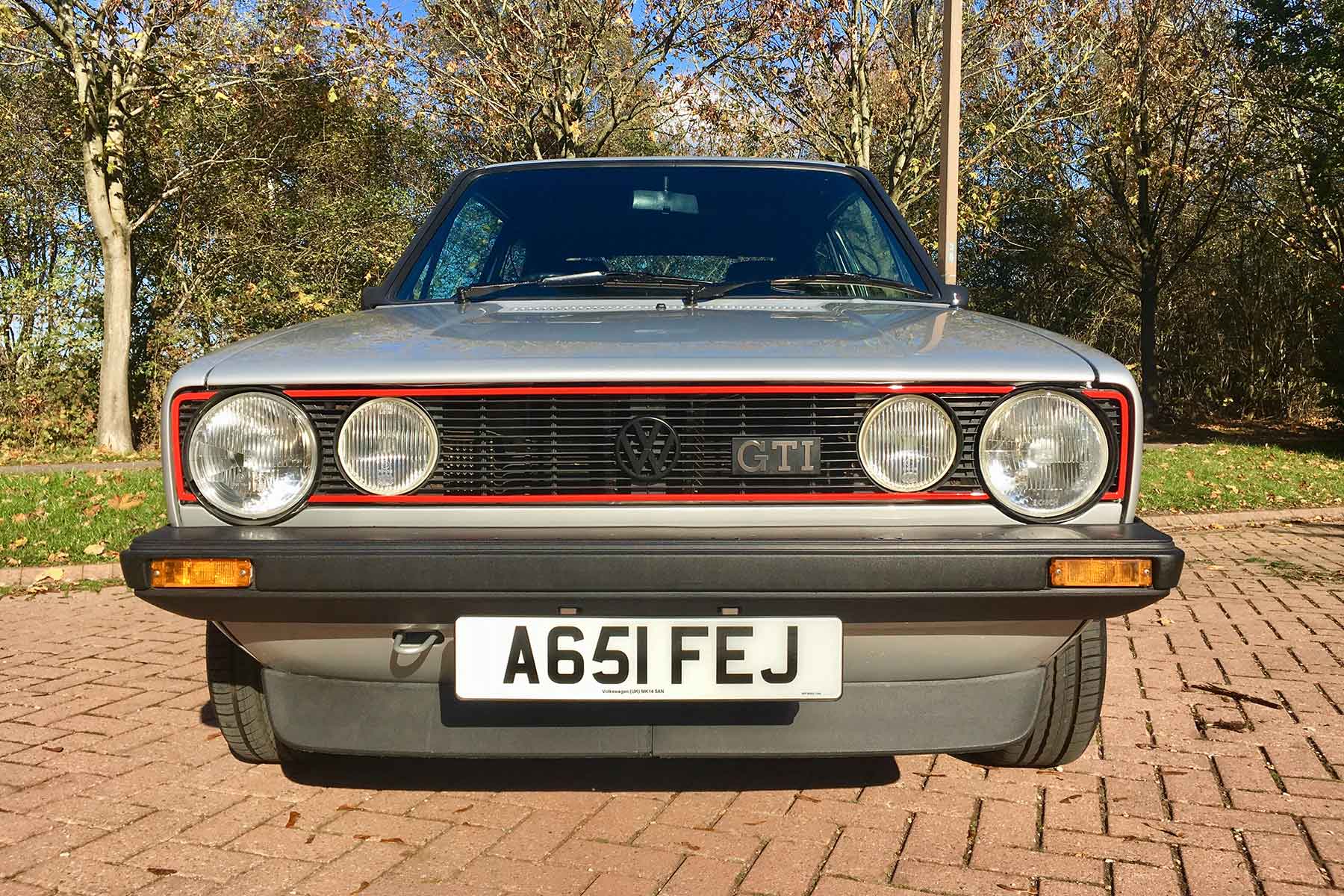 Some of my fondest memories are tied up in Volkswagens. A never-ending journey to the south of France in the back of my parents’ Passat. An impromptu picnic in an auntie’s Polo ‘Breadvan’. And my first hot hatch: a Mk1 Golf GTI. I polished its Mars Red paintwork until it turned pink.

There are other, less pleasant, recollections too. Like the time I spun the Golf on a wet corner, ending up backwards in a field of bemused sheep. Or being rear-ended at the traffic lights in a different GTI, which wrote the car off and ruined my Christmas Eve.

Like millions of others, then, the ‘people’s car’ has been a big part of my life. So when I was offered the chance to drive some of Volkswagen’s heritage fleet, I jumped at the chance. Time to make some new memories. 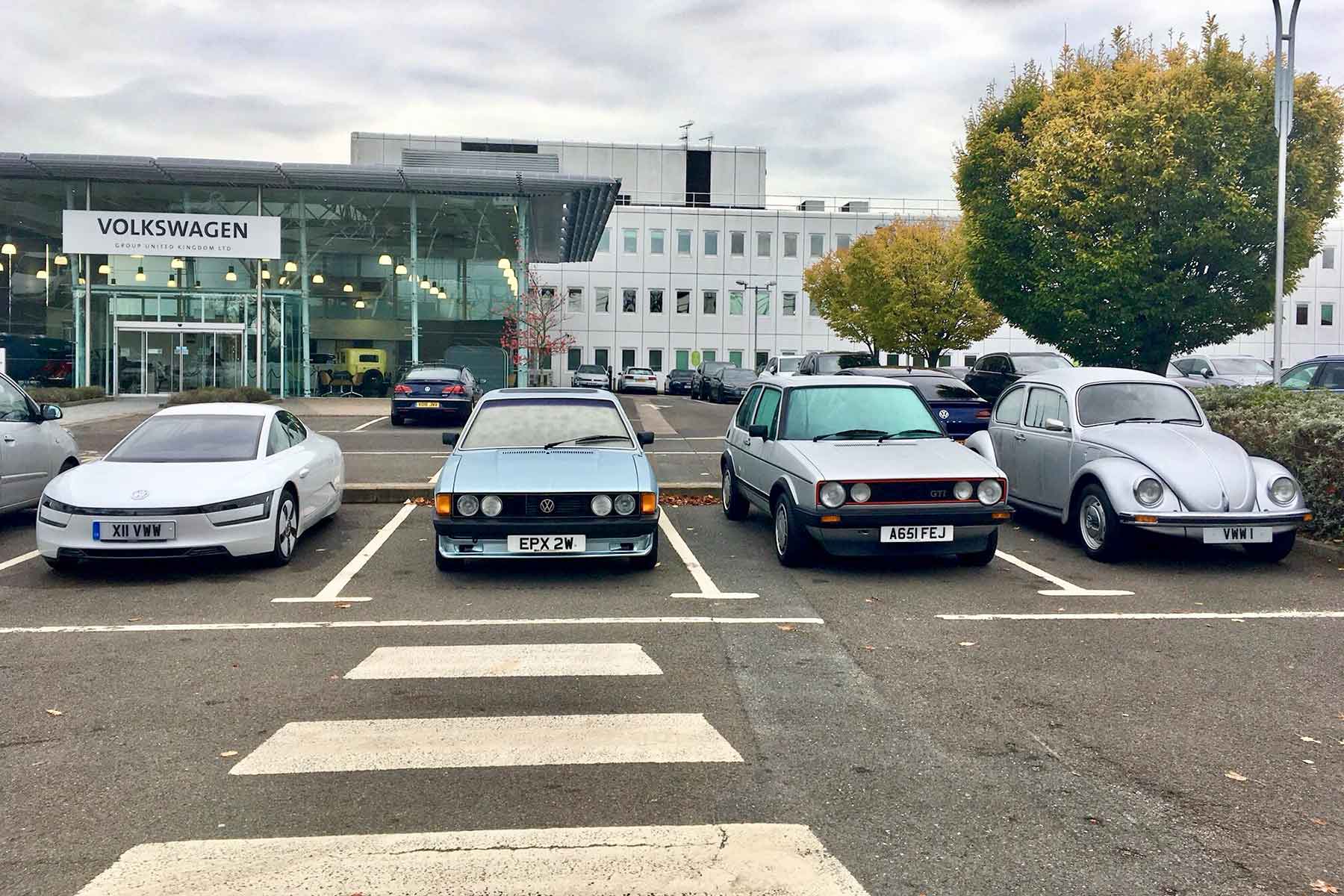 Pictured outside Volkswagen Group’s UK HQ in Milton Keynes (also home to Audi, Seat and Skoda, among others), the four cars gathered here could scarcely be more different. Yet all are important steps in the story of the core VW brand.

At the two extremes are the Beetle and XL1. The former shifted 21 million units over 65 years, making it the best-selling car of all time until the late 1990s (when it was overtaken by the Toyota Corolla). The latter was a test-bed for future technology – limited to just 250 cars, with 30 allocated for the UK.

The pair in the middle have far more in common. The original Golf GTI, contrary to popular perception, wasn’t the first hot hatchback, but did define the breed. And the Scirocco was one of Volkswagen’s rare attempts at a sports car, paving the way for the Corrado and other coupes to come. 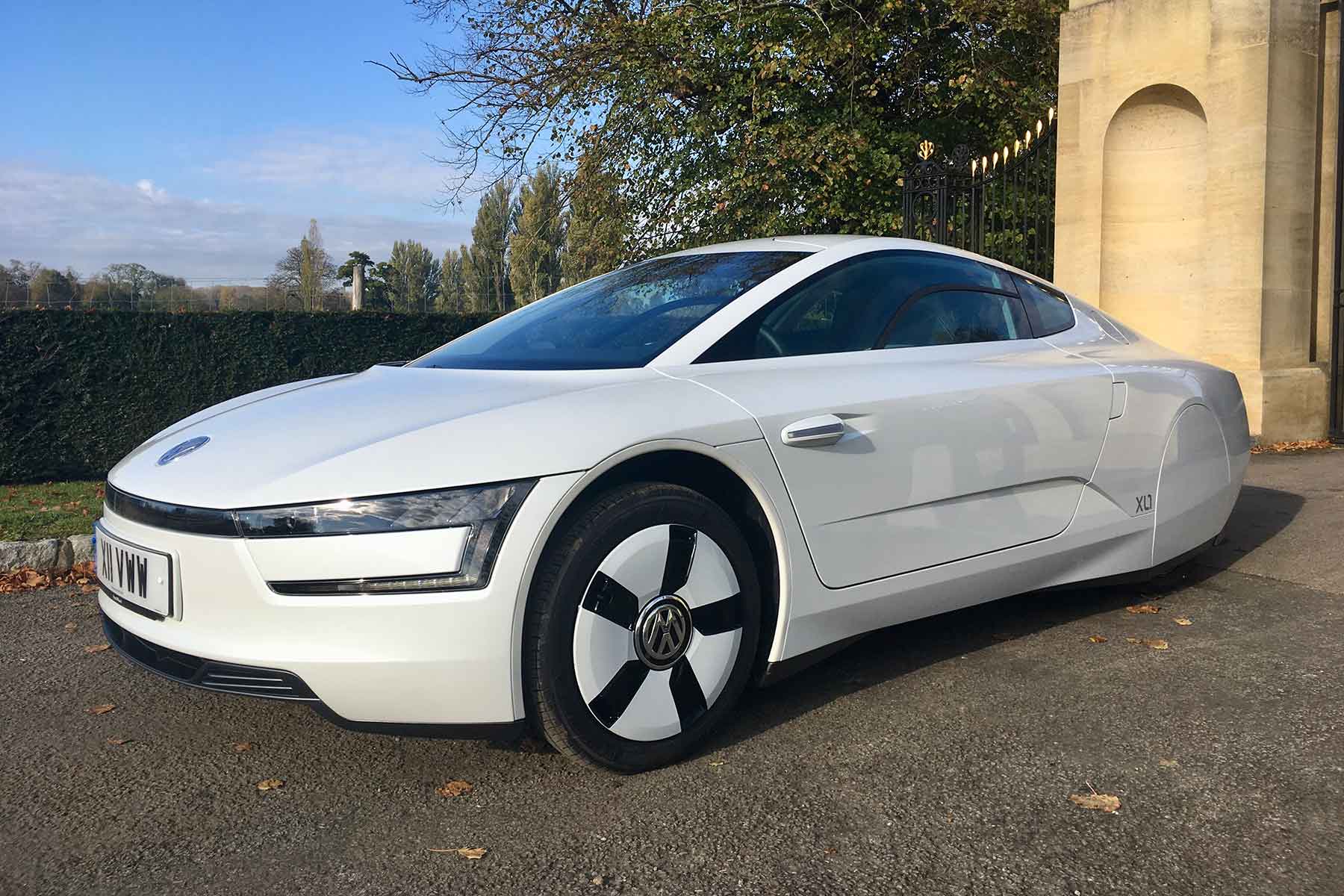 Back in 2011, Volkswagen predicted a future powered (in part, at least) by diesel. How times have changed. The XL1 is an early plug-in hybrid, its mid-mounted 48hp diesel engine supported by a 27hp electric motor.

Its target was a ‘one-litre car’ – i.e. one litre of fuel per 100km, or 282mpg. The XL1 smashed that, returning 0.9l/100km (313mpg) in official tests. One secret of its success was advanced aerodynamics, including cameras instead of door mirrors and covered rear wheels, resulting in a drag coefficient of Cd 0.189.

It looks like a supercar, but it’s actually the exact opposite: totally focused on reducing weight and hitting a ‘one litre per 100km’ fuel economy target. pic.twitter.com/fGHpJHiLDr

Unfortunately, any savings in running costs were wiped out by the purchase price. The XL1 cost around £100,000 when new, although its rarity means used examples have barely depreciated today. 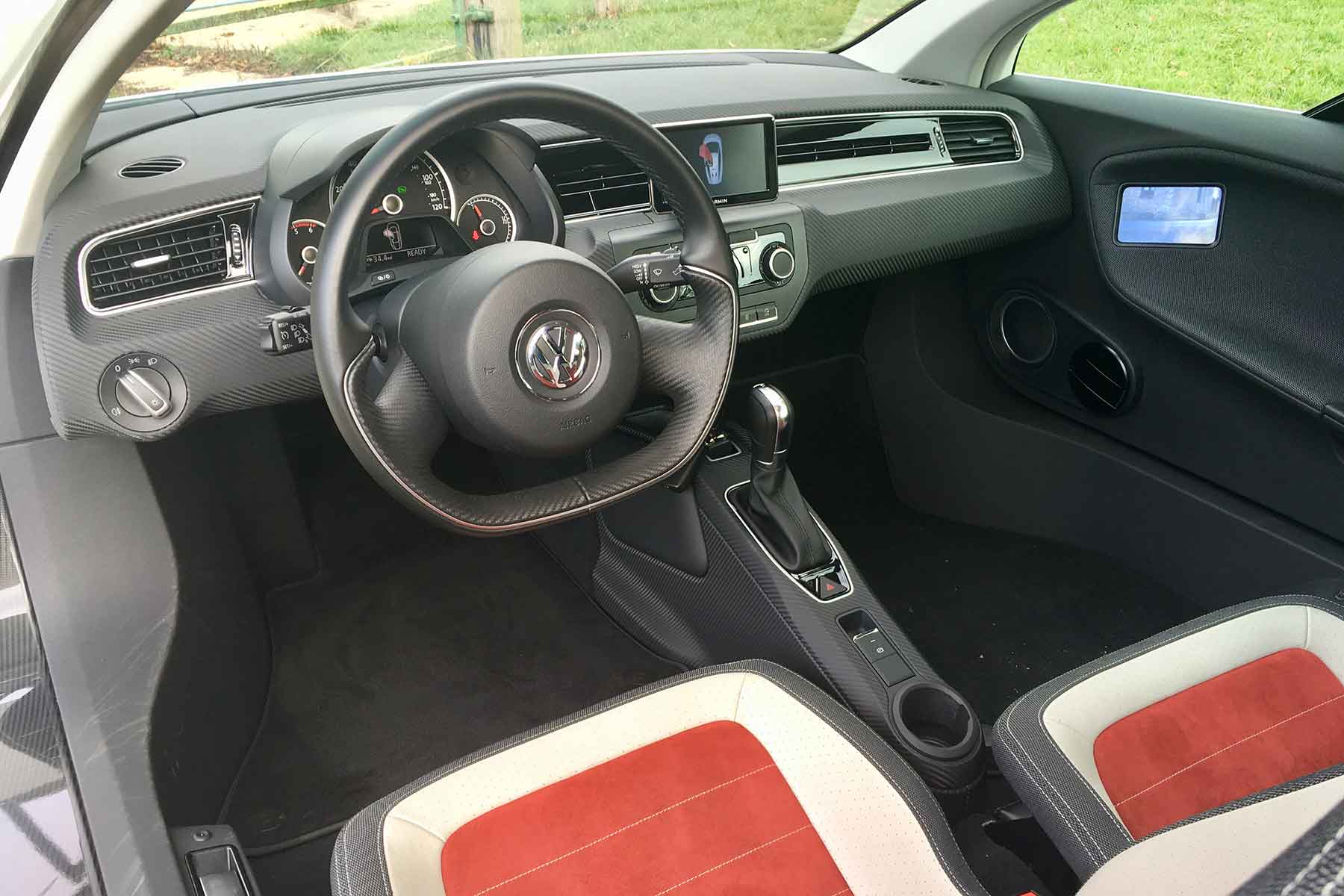 The XL1 looks otherworldly in the metal (sorry, plastic), like a prop from a sci-fi film. Lined up alongside our three classics, it seems perfectly proportioned, but it’s tiny compared with any modern car.

Open a butterfly-wing door, slide over the wide sill and the cabin feels surprisingly conventional (spot the Mk6 Golf switchgear). It’s decently spacious, too, with staggered seats – the passenger chair is fixed – that allow for a narrower body and slipperier shape.

In many ways, the XL1 drives like any other hybrid car. There are no gears to worry about and it switches automatically between electric and/or internal combustion power as needed. But the tiny, two-cylinder 800cc diesel sounds like nothing else, hammering away like a sewing machine as you hyper-mile to 62mph in 12.7sec and 99mph flat-out.

Despite the mini-McLaren looks, it’s no sports car either. Super-skinny 115/80 R15 (front) and 145/55 R16 (rear) tyres see to that. Still, it turns as many heads as anything from Weissach or Maranello. 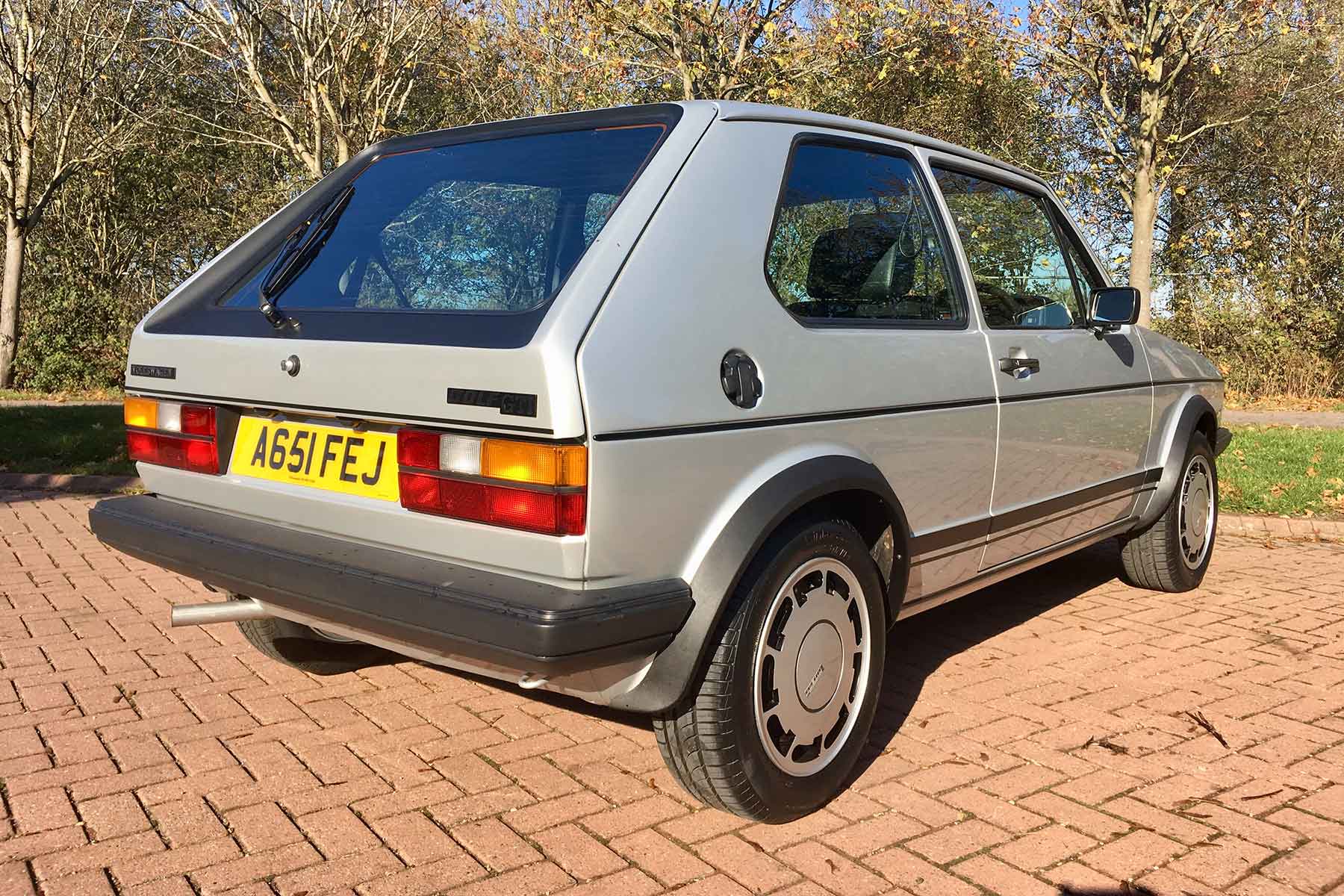 The Golf GTI first appeared at the Frankfurt Motor Show in 1975 and a run of 5,000 cars was planned – enough to satisfy Group 1 racing homologation rules. When sales started in 1976, however, production rocketed from 50 to 500 cars a day. Such was the demand for this nascent icon.

Early cars used the fuel-injected 110hp 1.6-litre engine from the Audi 80 GTE: good for 0-62mph in 9.2sec and 113mph. A new 112hp 1.8 engine arrived in 1982, bringing more torque and improved fuel economy. The original GTI remained on sale until 1983, although the cabriolet version lasted a decade longer.

‪Mk1 Volkswagen Golf GTI.‬ I’ve owned several of these, so this one’s an unapologetic – and wonderful – nostalgia trip.‬ Weirdly, even the brakes are better than I remembered…‬

Many of the Mk1’s trademark features – such as the red go-faster stripe, ‘Jacara’ tartan seat trim and golf ball gearknob – endure on Volkswagen GTIs to this day. More than simply a car, this was the genesis of an entire subculture. 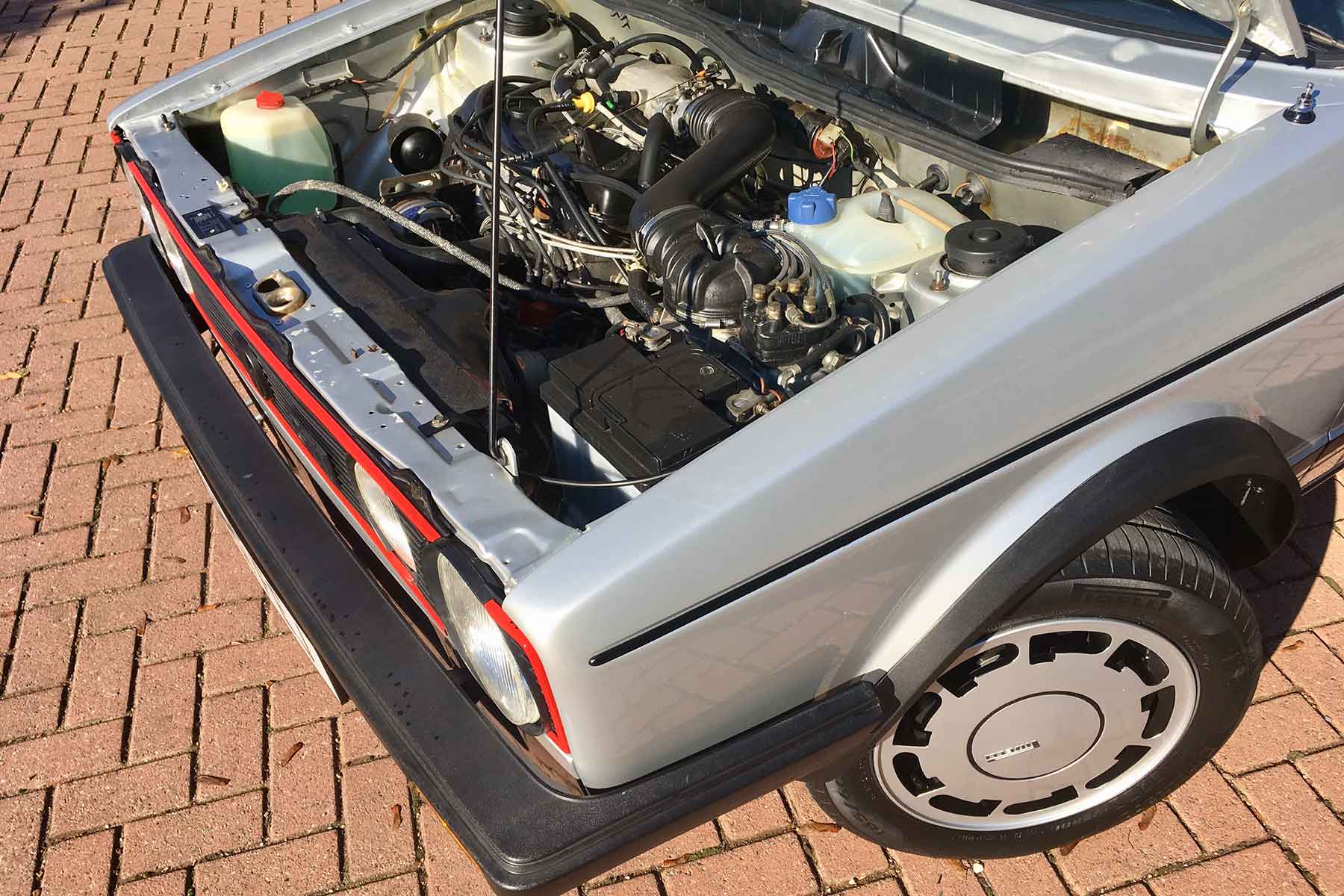 I’ve owned and adored three Mk1 GTIs, so if you’re hoping for a rational, level-headed review, you’ve come to the wrong place. There’s just something about these cars that gets under my skin.

I’m perhaps in the minority for preferring the zingier 1.6 engine, but the more flexible 1.8 is still a peach. Tappety at low revs, then gruff and buzzy at the top end, it’s lively and bursting with character. The unassisted steering and long-throw gearshift are wonderfully tactile, too.

Ultimately, the Mk1 doesn’t possess the balletic balance of, say, a Peugeot 205 GTI. Push hard and it defaults to tyre-scrubbing understeer, accompanied by generous helpings of body-roll. However, while most French hatches have rusted in pieces, this Golf still feels as solid as the day it left Wolfsburg. I’m in love all over again. 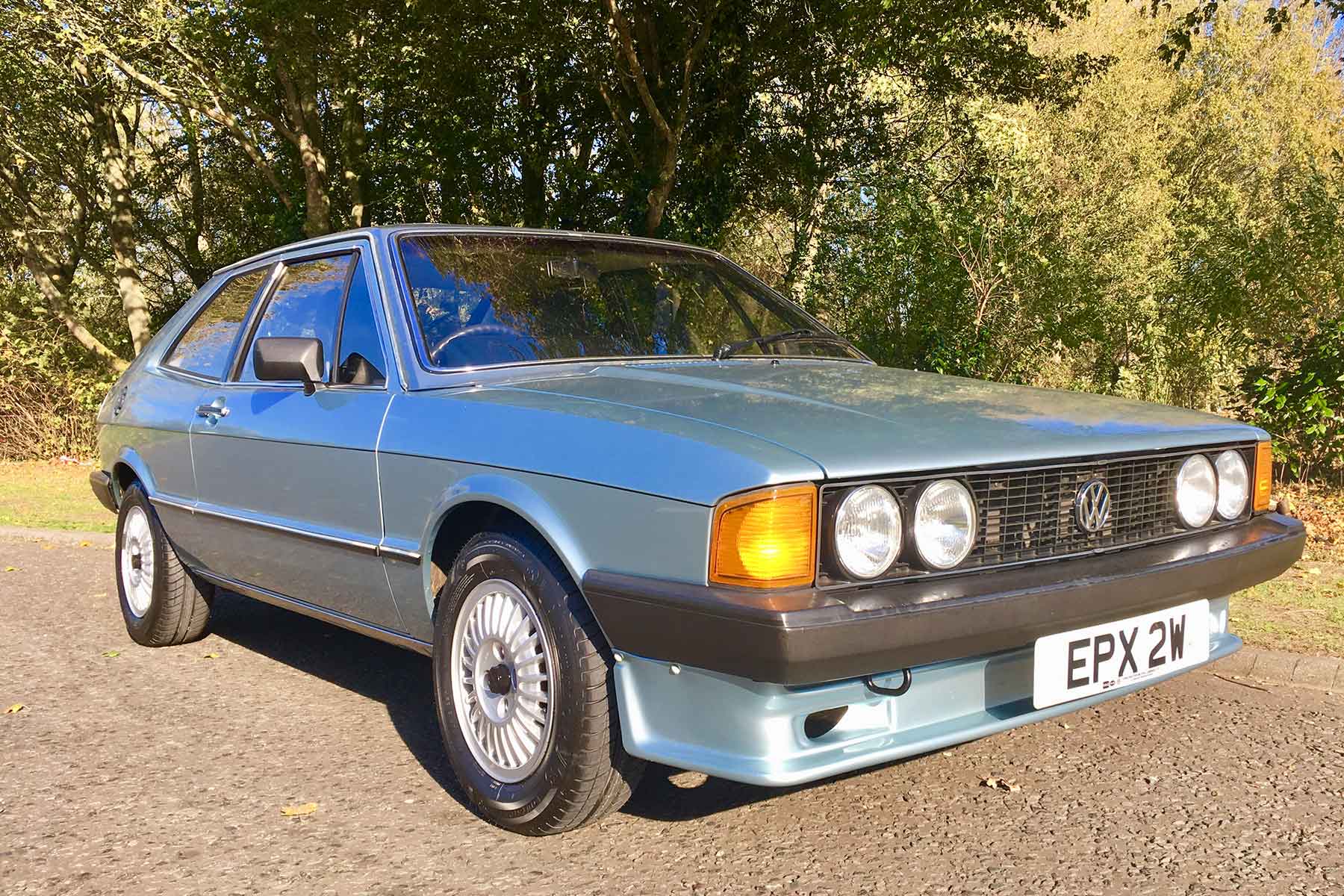 Until the 1974 Scirocco, Volkswagen had shied away from sporty cars. The Beetle-based Karmann Ghia coupe of 1962 was more about style than speed, while the VW-Porsche 914 of 1969 was a joint venture that usually wore Porsche badges.

Not that every Scirocco was sporty; the entry-level model had a 1.3-litre engine producing just 60hp. Fortunately, further up the range, things got more interesting – culminating in the GLI (later GTI) with the same engines as the hottest Golf.

Next up: Mk1 Volkswagen Scirocco Storm.

One of Giugiaro’s very finest designs – from the days when a flagship coupé wore 13-inch alloys… pic.twitter.com/6Jg2XxZVpy

Part of the Scirocco’s appeal was its wedgy, crisp-edged styling – the work of Giorgetto Giugiaro, who also designed the Mk1 Golf. The build process was farmed out to Karmann in Osnabruck. 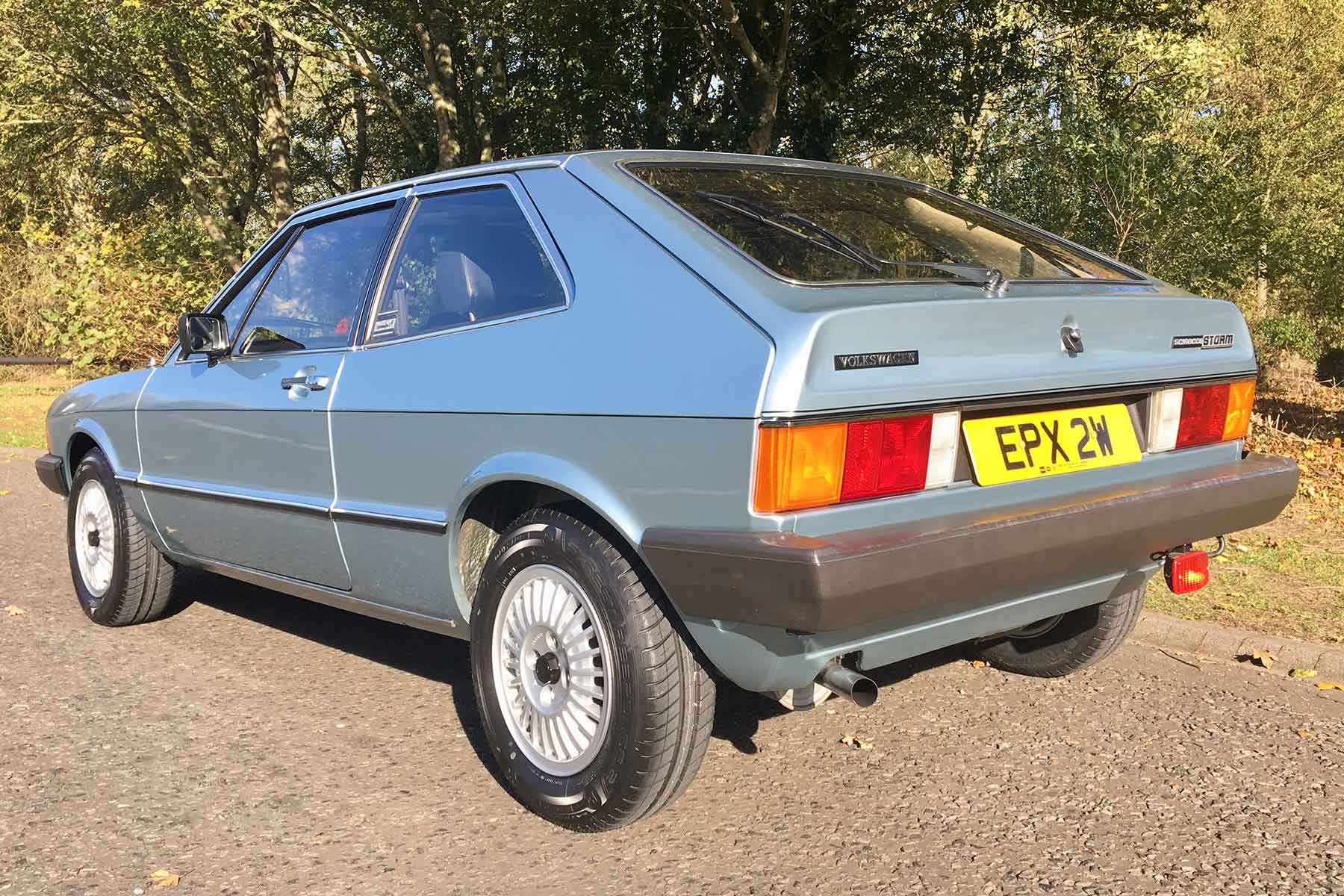 As with the Campaign above, Volkswagen has sourced a high-spec special edition for its heritage fleet. The Scirocco Storm had a front spoiler with integrated airdams and plush leather trim. This 1981 example has the 1.6 ‘GTI’ engine, meaning 0-62mph in 8.8sec and a 115mph Vmax.

There are obvious similarities between Scirocco and Golf, and notable differences. Its driving position is lower and more laid-back, while the three-spoke steering wheel still has the Wolfsburg wolf at its centre – a symbol that disappeared sometime in the early 1980s. The dashboard, with its deep-set dials and Blaupunkt tape player, feels more old-fashioned, too.

On the road, the Storm feels eager and surprisingly quick, aided by very short gear ratios. At 70mph in fifth gear, the rev counter has already passed 4,000rpm. Not ideal for motorway miles.

The VW feels most at home on B-roads, where its sharp steering and sure-footed chassis come to the fore. For sentimental reasons, I’d still pick the Golf, but the ‘Rocco is a more accomplished driver’s car. 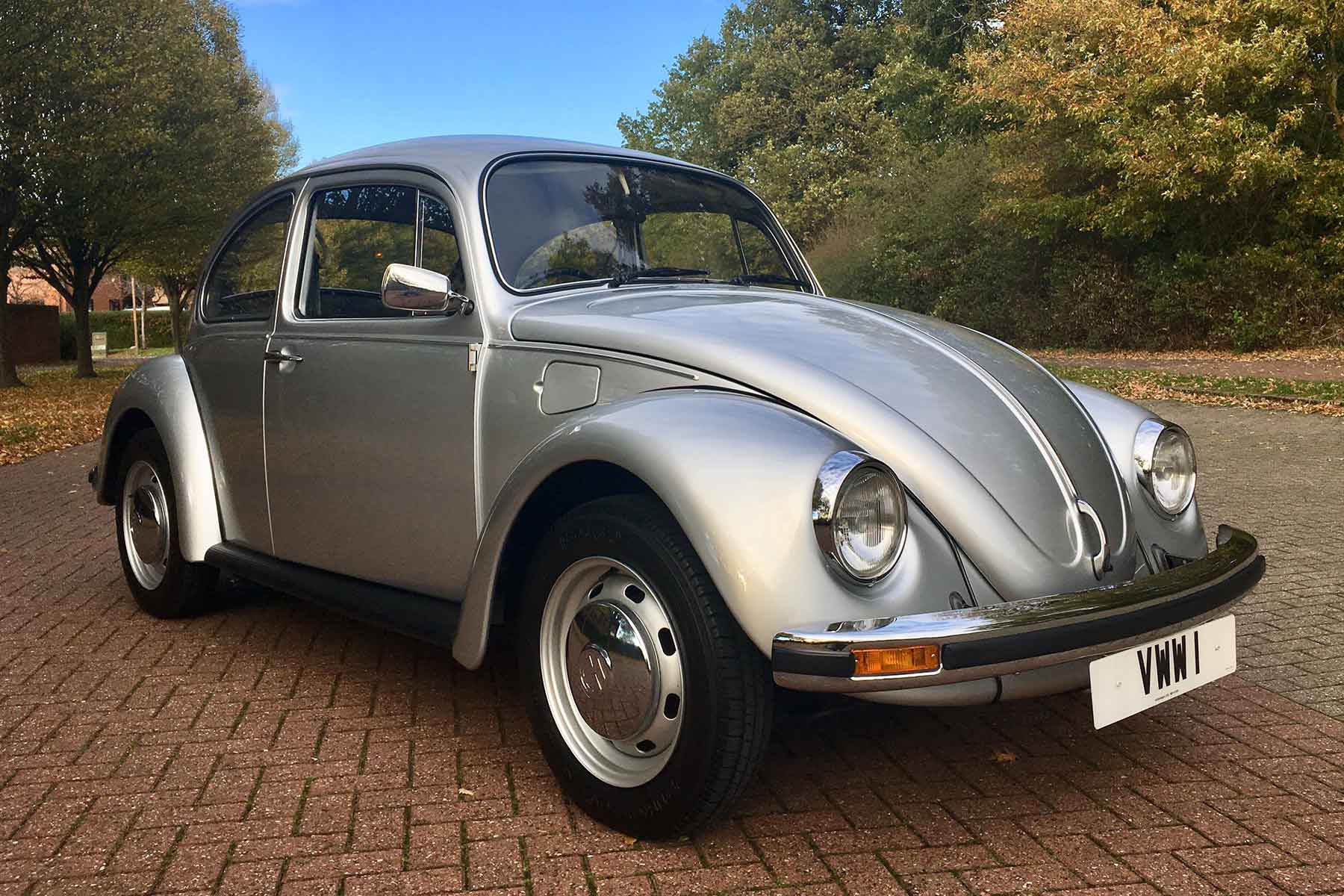 The Beetle is a car of contrasts. Launched in 1938 as the Kraft-durch-Freude wagen (Strength-through-Joy car), its remit was to mobilise the masses in Nazi Germany. We all know how that ended, but the Beetle transcended its unpalatable origins – eventually becoming The Love Bug in Disney’s 1968 film and a totem for the flower power generation.

A oddball saloon with an air-cooled engine out back, the Beetle was the antithesis of America’s post-war ‘land yachts’ and muscle cars. It also looked decidedly old-school by the time the front-engined, front-wheel-drive Mini debuted in 1959. The car’s key strength was reliability, something Volkswagen played on in famous poster ads labelling it a ‘Lemon’.

Finishing the day with the 1977 Volkswagen Beetle 1200L. Naïvely, I expected this to feel ever-so-slightly like an early Porsche 911. It doesn’t. Still, an experience – and one ticked off the bucket list.

The Beetle was effectively replaced in 1974 by the Golf – a far more more practical car with a hatchback and water-cooled engine. However, it remained in production in Europe until 1978, and lived on in Mexico until 2003. 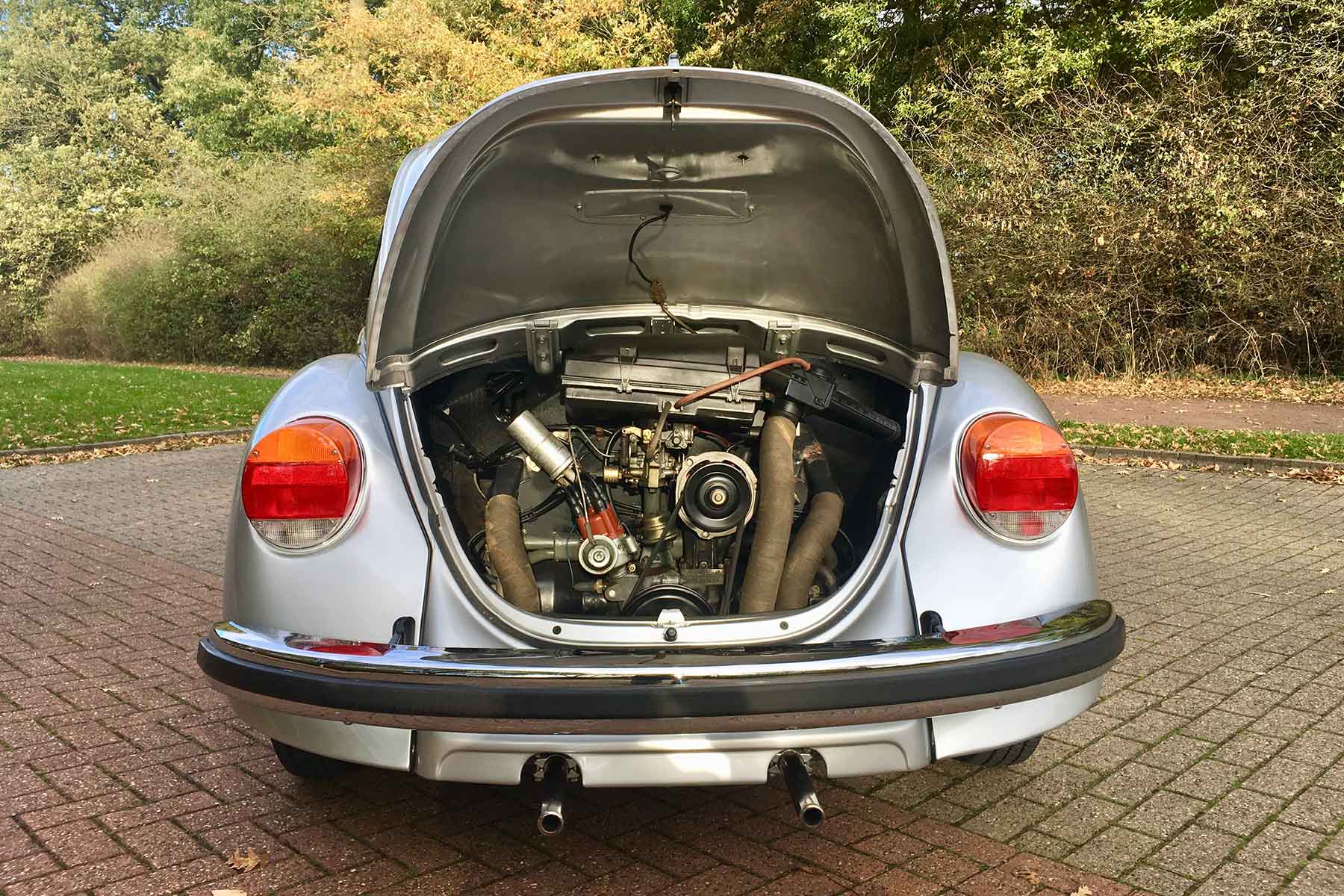 It’s amazing to think this 1977 Beetle 1200L – one of the final cars built in Emden, Germany – was sold in showrooms alongside the Golf GTI. The two are on different planets in terms of performance and dynamic prowess.

Indeed, with 34hp and a 0-62mph time of 35 seconds, this may be the slowest car I’ve ever driven. Acceleration above 50mph is glacial. Not that there’s much incentive to go quickly: vague steering, below-par brakes and rudimentary damping see to that. The Beetle had cross-ply tyres when new, but even the radials fitted here don’t help much.

As you’ve no doubt guessed, I won’t be growing my hair, moving to San Fran and buying a Beetle. Nonetheless, driving one feels like a rite of passage for a motoring journalist and I’m grateful for the experience. This remains one of the most important cars ever made.

My personal Volkswagen story continues with a Mk5 Golf GTI. It’s been my daily-driver for the past 18 months and is very much part of the family. Hopefully my two children will remember it in years to come.