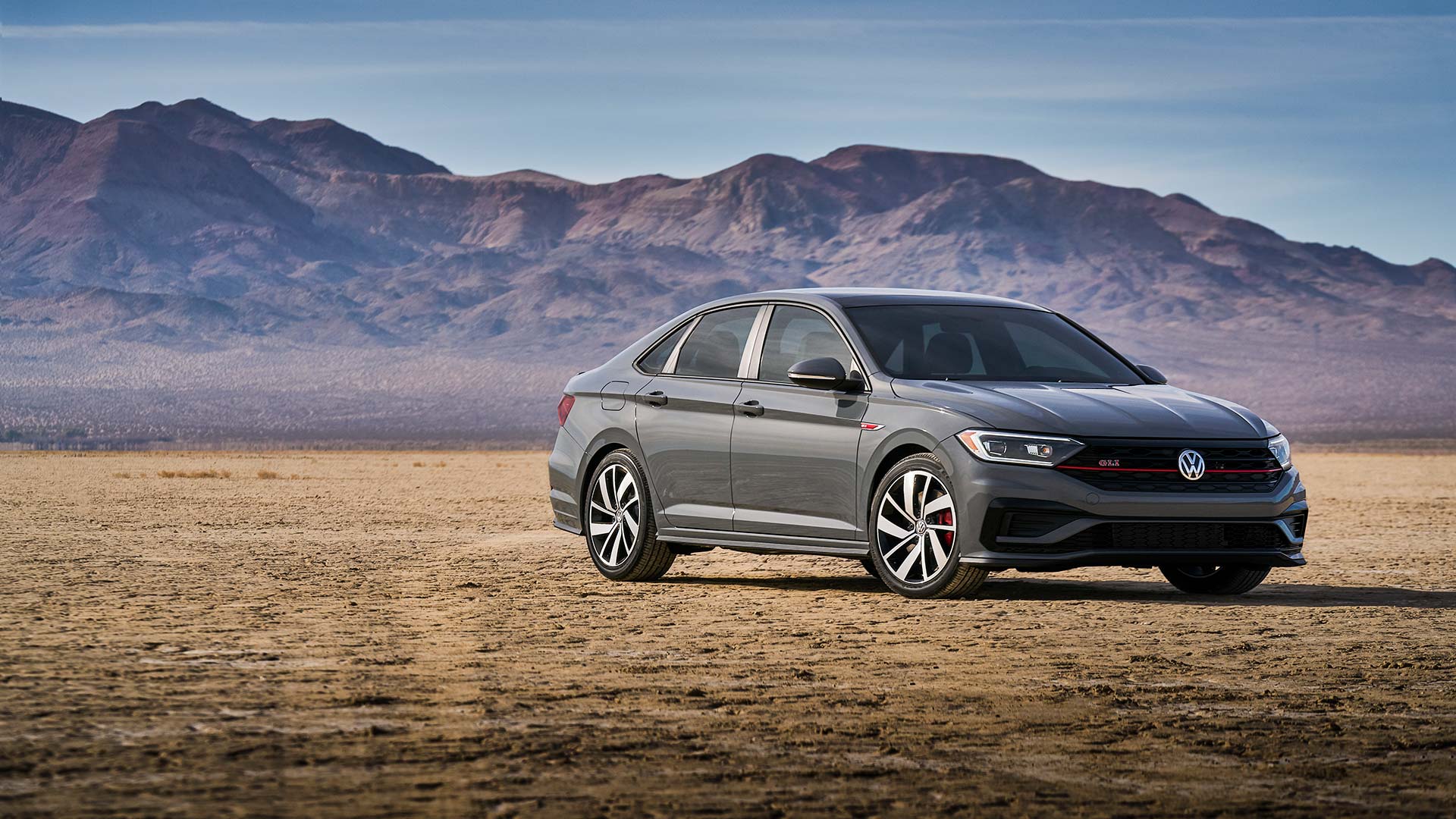 Volkswagen has unveiled an all-new version of the Volkswagen Jetta GLI at the 2019 Chicago Auto Show. Completely overhauled to cater to the North American market, it marks the sixth-generation of performance compact saloon (surely ‘sedan’?—Ed) to wear the GLI badge. 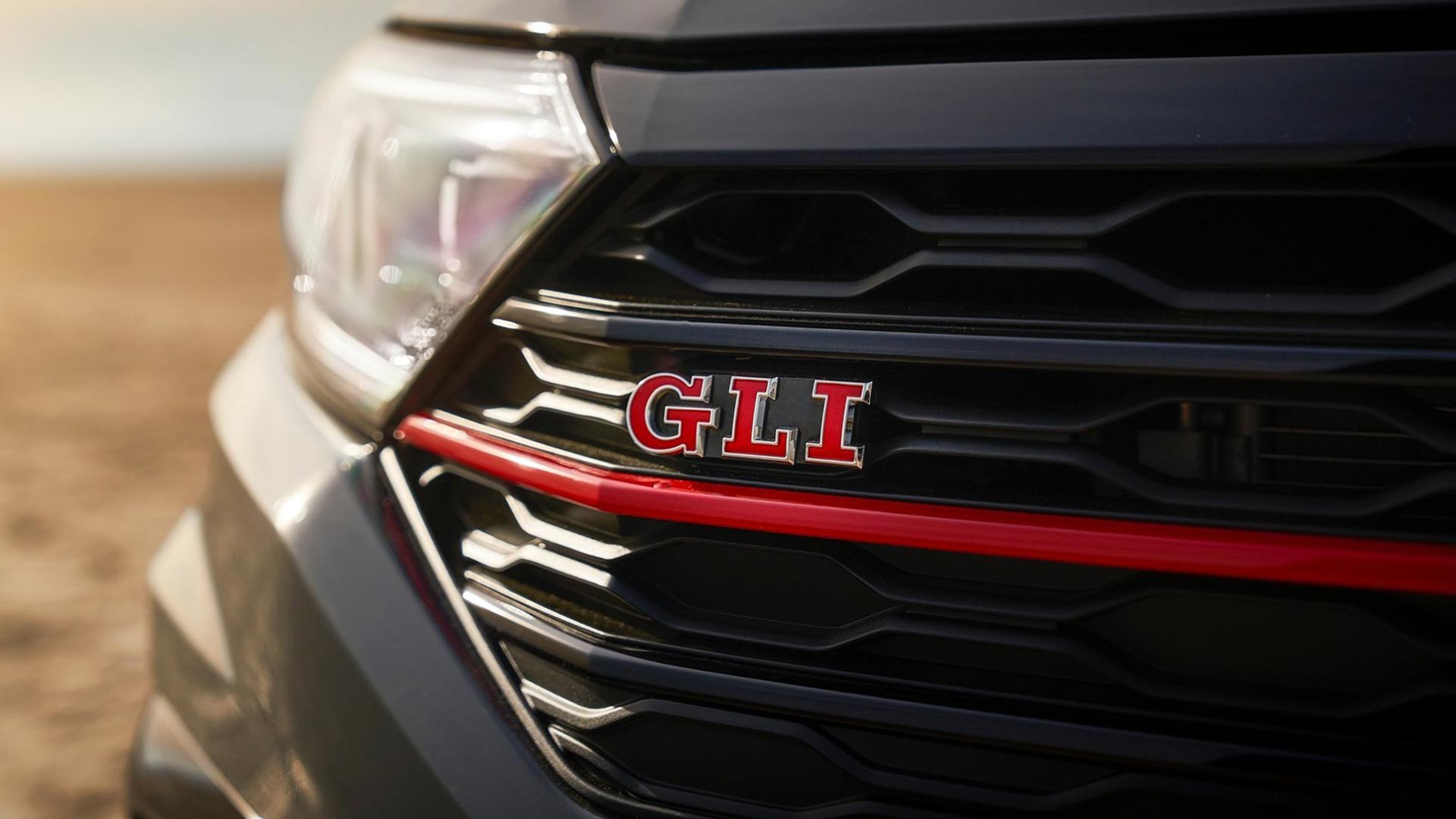 However, with the Jetta range quietly dropped from many global markets in recent years, we felt it timely to delve into the back catalogue to reminisce about the Golf GTI hot hatch with extra boot space. Join us as we look back at the Golf GTI’s long-forgotten four-door sister car. 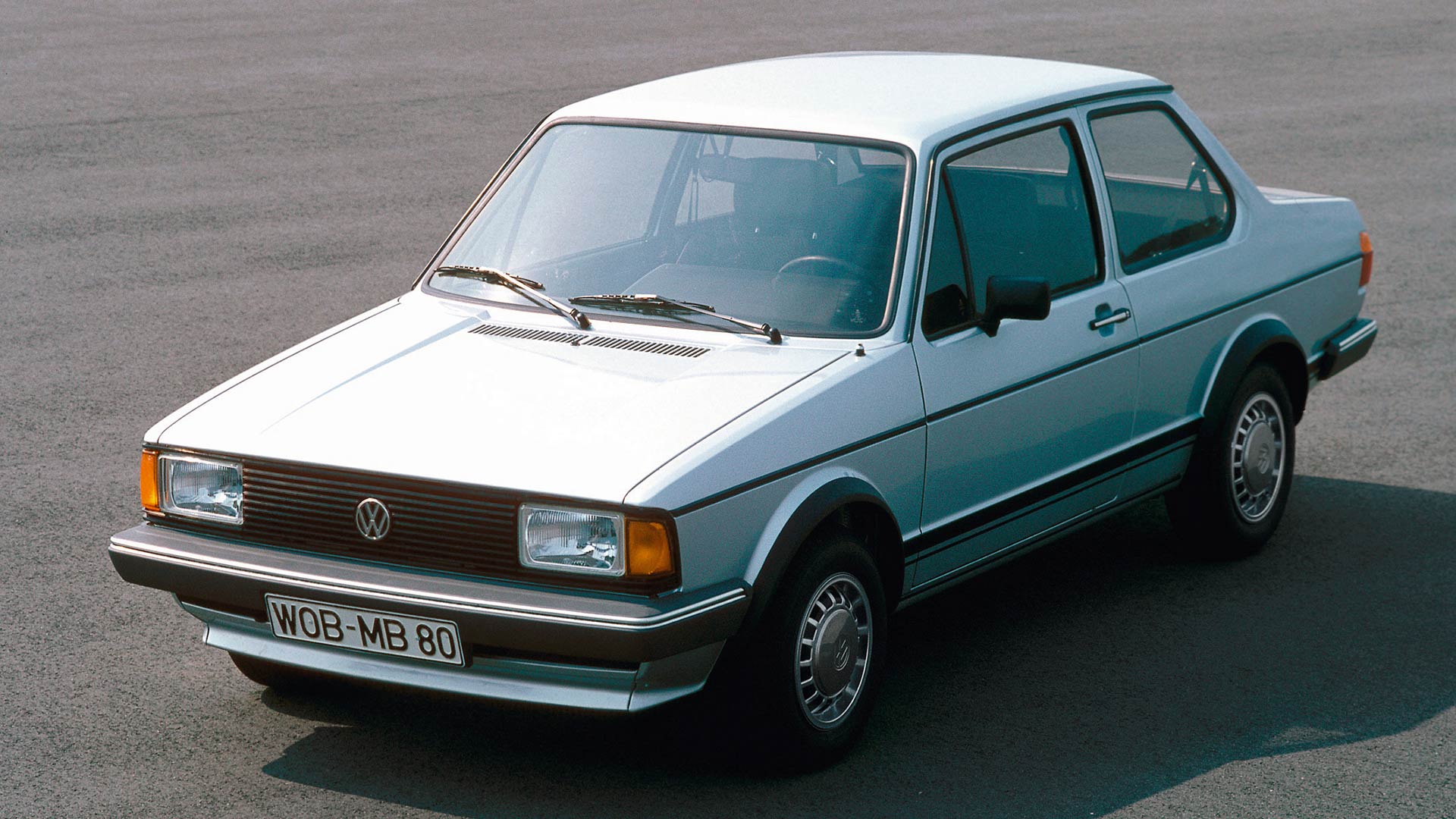 Built to appeal to the American market, the first Jetta was launched in 1979. Originally known as ‘Hummel’ (German for bumblebee) during development, the Jetta name was derived from the Atlantic jet stream wind.

Designed by Giorgetto Giugiaro, who had also designed the original Golf, the Jetta was offered in both two and four-door saloon versions. All that extra metal at the rear offered up considerably more boot space compared to the hatchback Golf, whilst interiors were intended to be more upmarket. 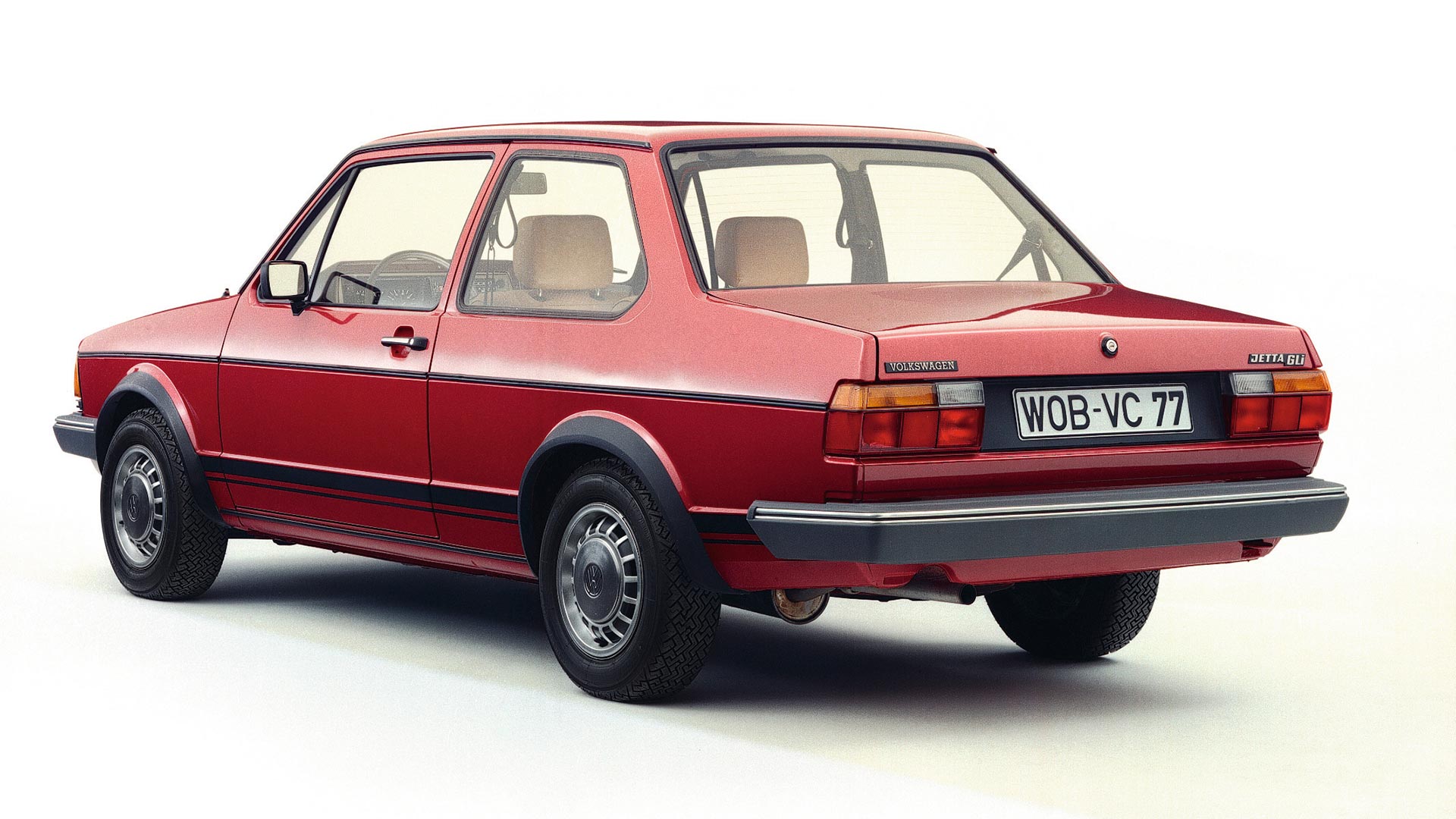 Offered in European markets from 1980 onwards, the GLI became the range-topping model. Power came from the 1.6-litre four-cylinder engine used in the Golf GTI, producing 108hp.

With the Jetta proving to be a sales hit in the United States, in 1984 Volkswagen introduced a GLI version for the final year of the Mk1 model. A 90hp 1.8-litre four-cylinder engine featured, matched with a five-speed manual gearbox, plus uprated suspension. 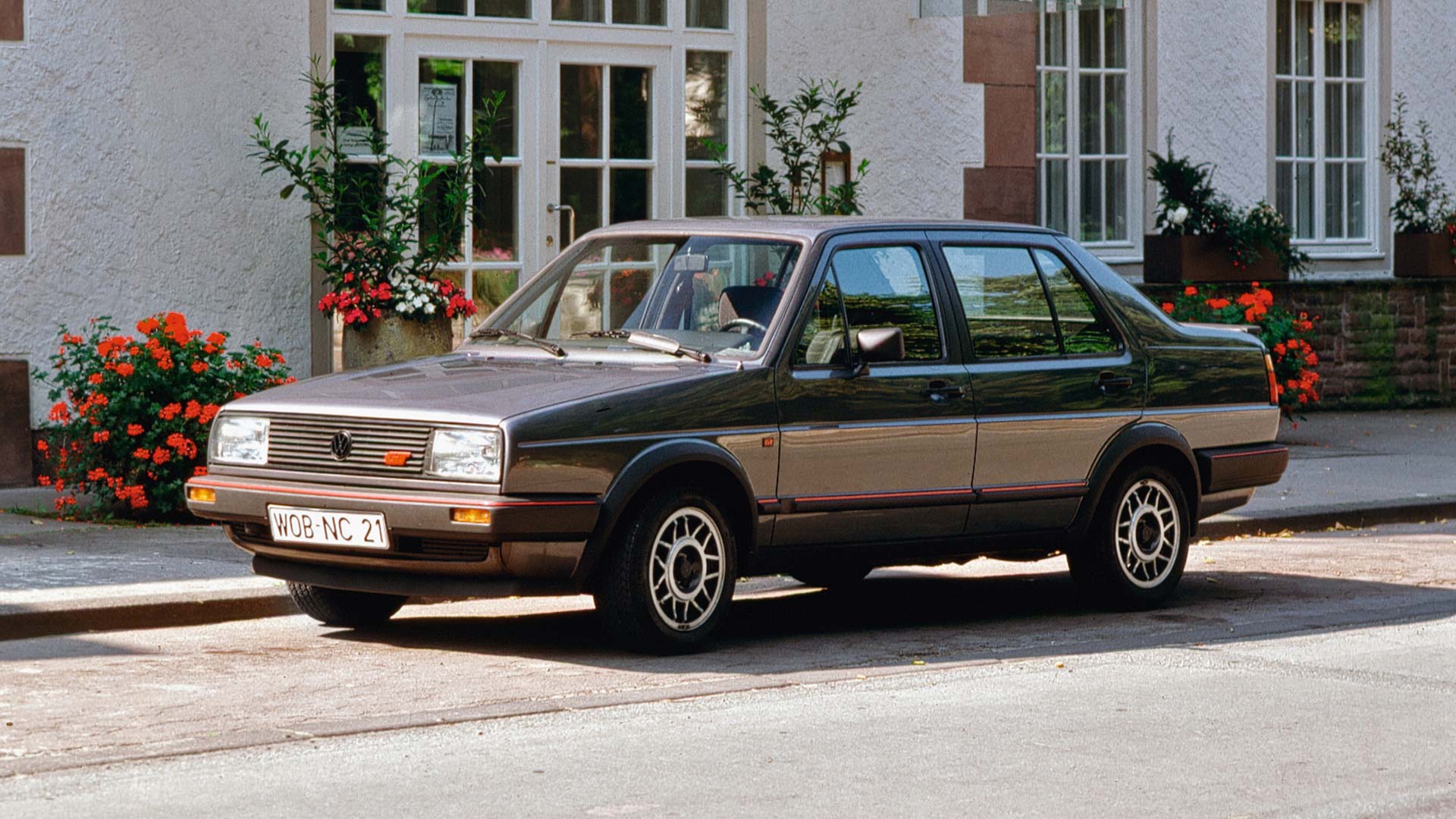 As the Golf moved to a new second-generation platform in 1983, the Jetta followed a year later in 1984. The two and four-door bodyshell options remained, whilst engine choices became even larger.

Performance versions were available from the outset in European markets, with the Jetta GT on sale from launch. Initially the Jetta GT made use of the 110hp 1.8-litre four-cylinder engine from the Golf GTI. The extra weight from the larger bodywork meant the Jetta was around a second slower in a 0-60mph sprint than the Golf.

North American sales started in 1985, with the GLI endowed with 100hp. 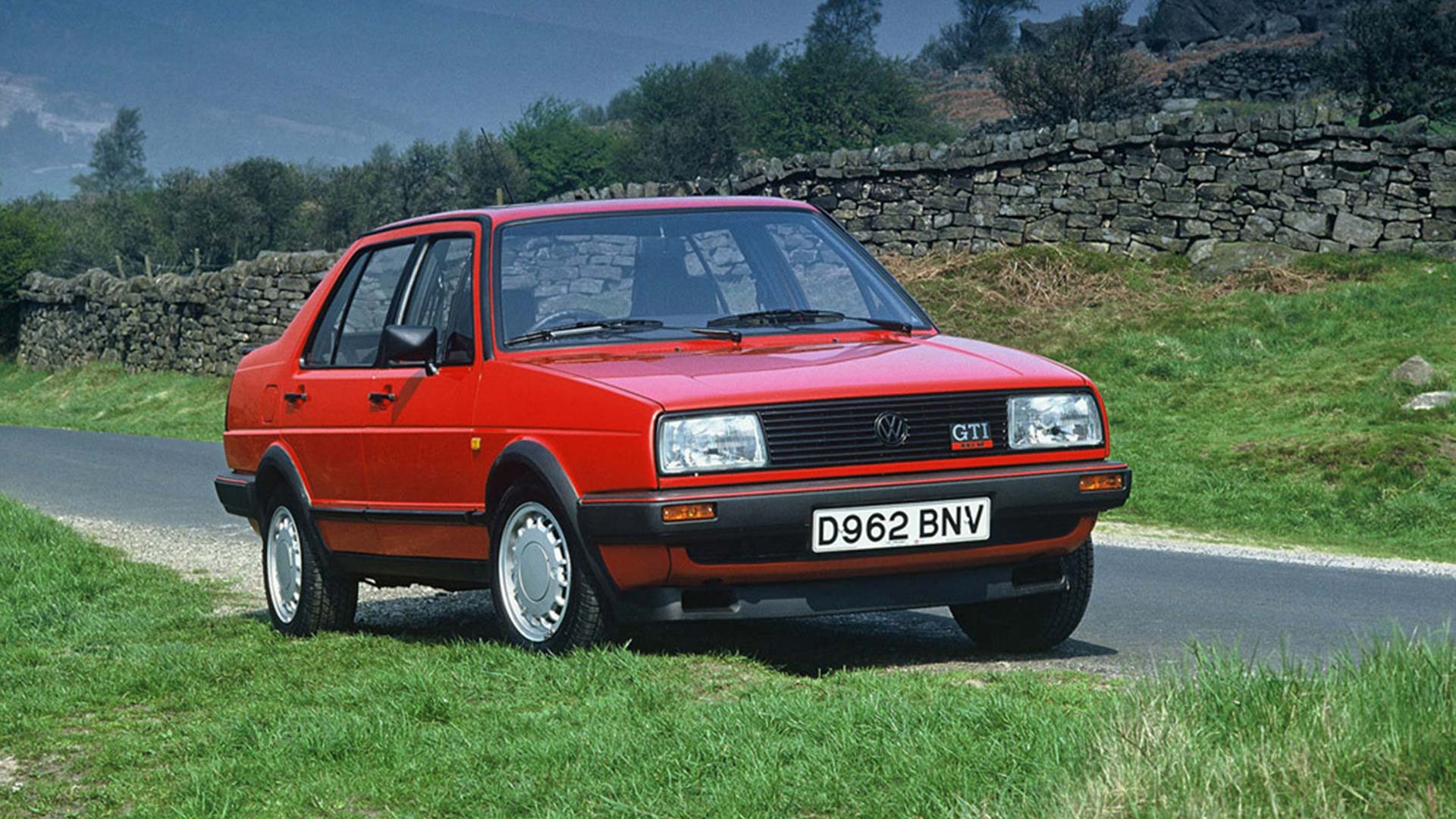 With the 1980s hot hatch war in full swing, the quick Jetta gained a new name and bigger engine in 1986. With the 2.0-litre four-cylinder engine from the Golf, the Jetta GTI 16v now packed a considerable 134hp and 129lb-ft of torque.

Even with greater performance, in the European market the Jetta would always play the underdog role against the popular Golf. However, in the USA, the Jetta would become one of the best-selling imported European cars. 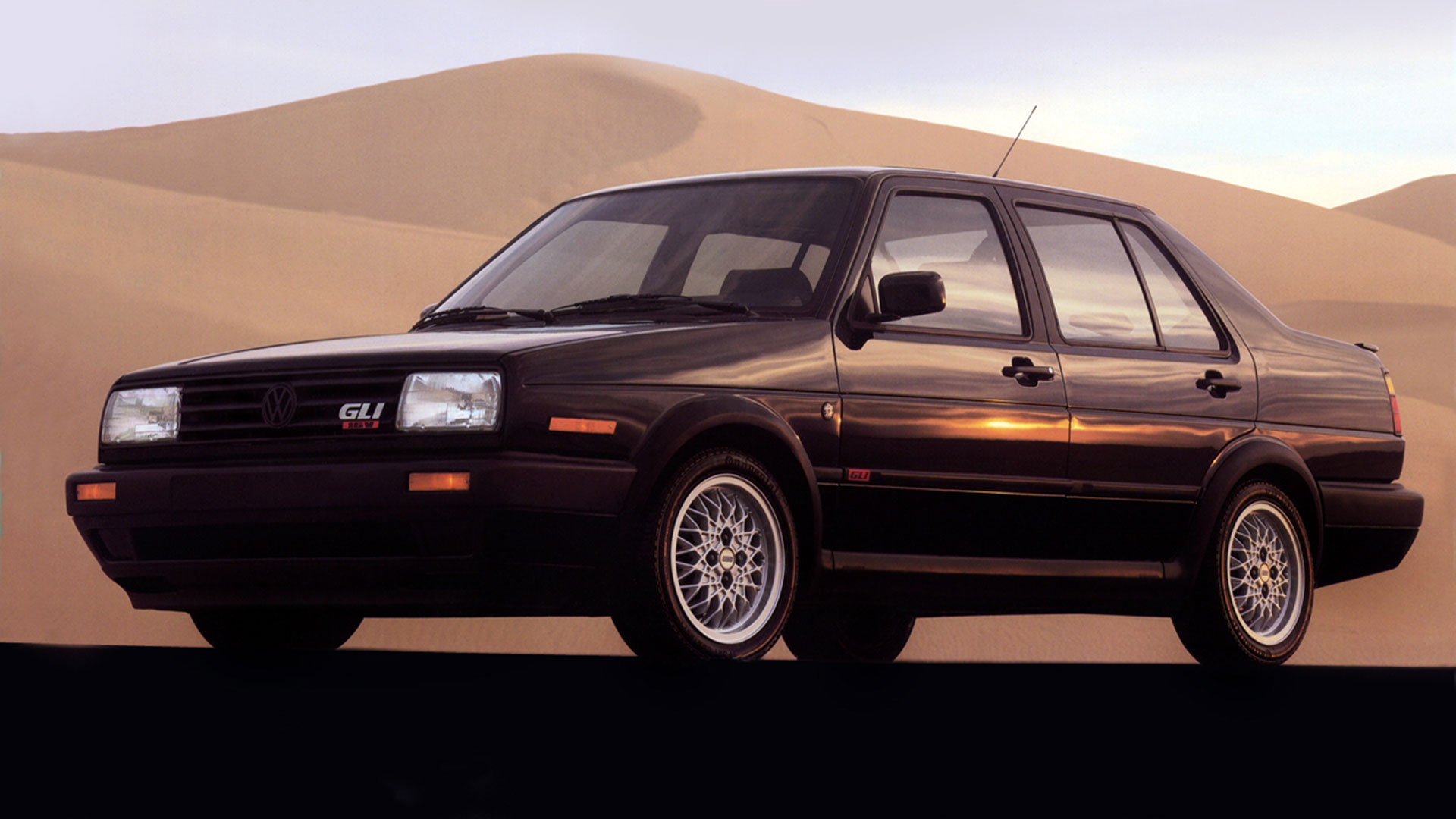 Proving how important the Jetta was to the North American market, a Wolfsburg Edition option package was launched for the Jetta in 1989. Initially planned as a limited run of 1,500 cars, the chance to spec the Wolfsburg option continued until 1991. 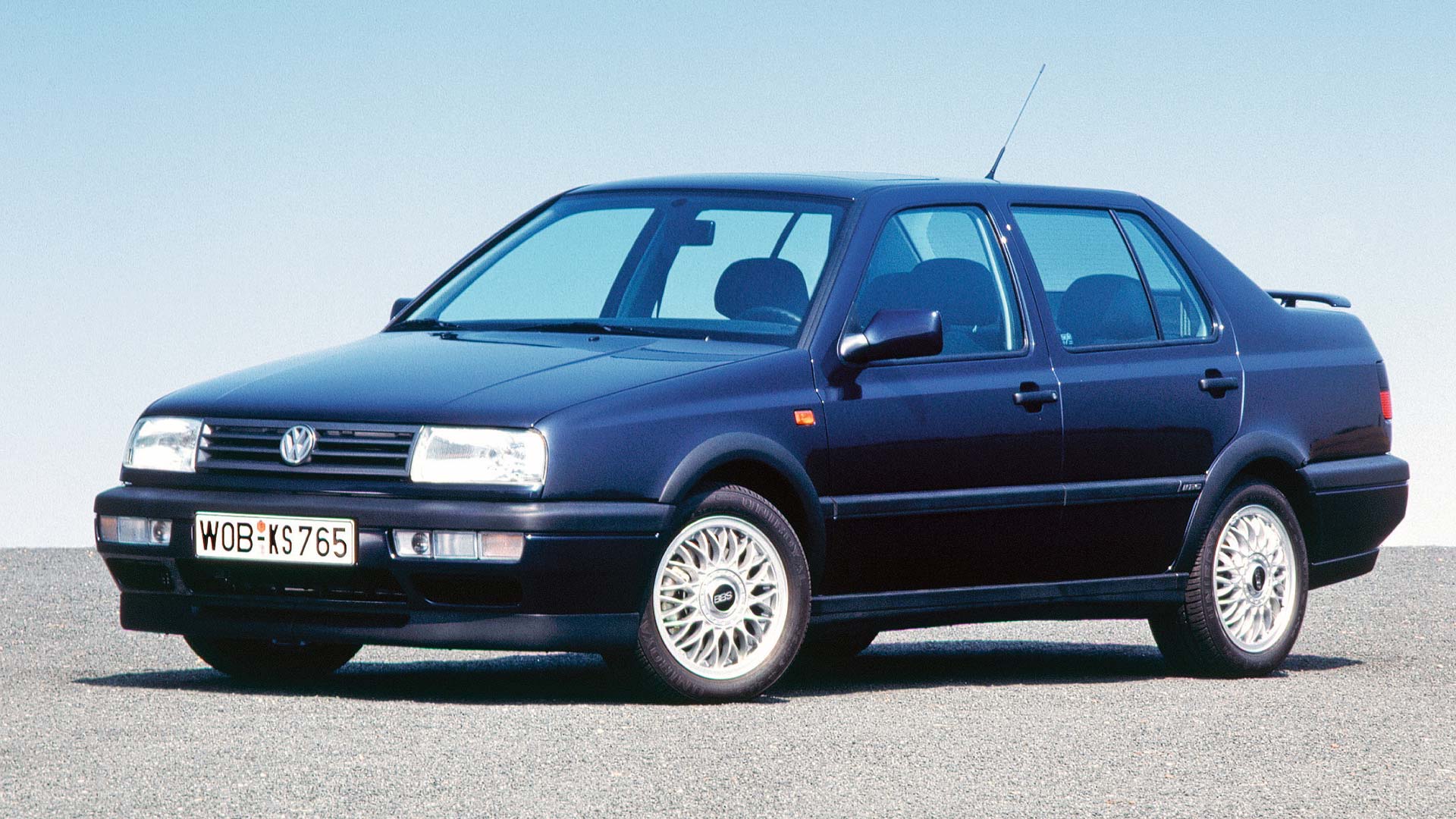 A new third-generation Golf also meant a new edition of the hatchback’s more practical cousin. In European markets, it also meant ditching the Jetta name and replacing it with new wind-inspired nomenclature. Vento literally translates as wind in Portuguese and Italian, but America retained the now much-loved Jetta badge.

Bigger, and packed with extra safety equipment to meet new regulations, the Vento became noticeably bulkier than its predecessors. At least there was plenty of room for all your junk in that bootylicious trunk. 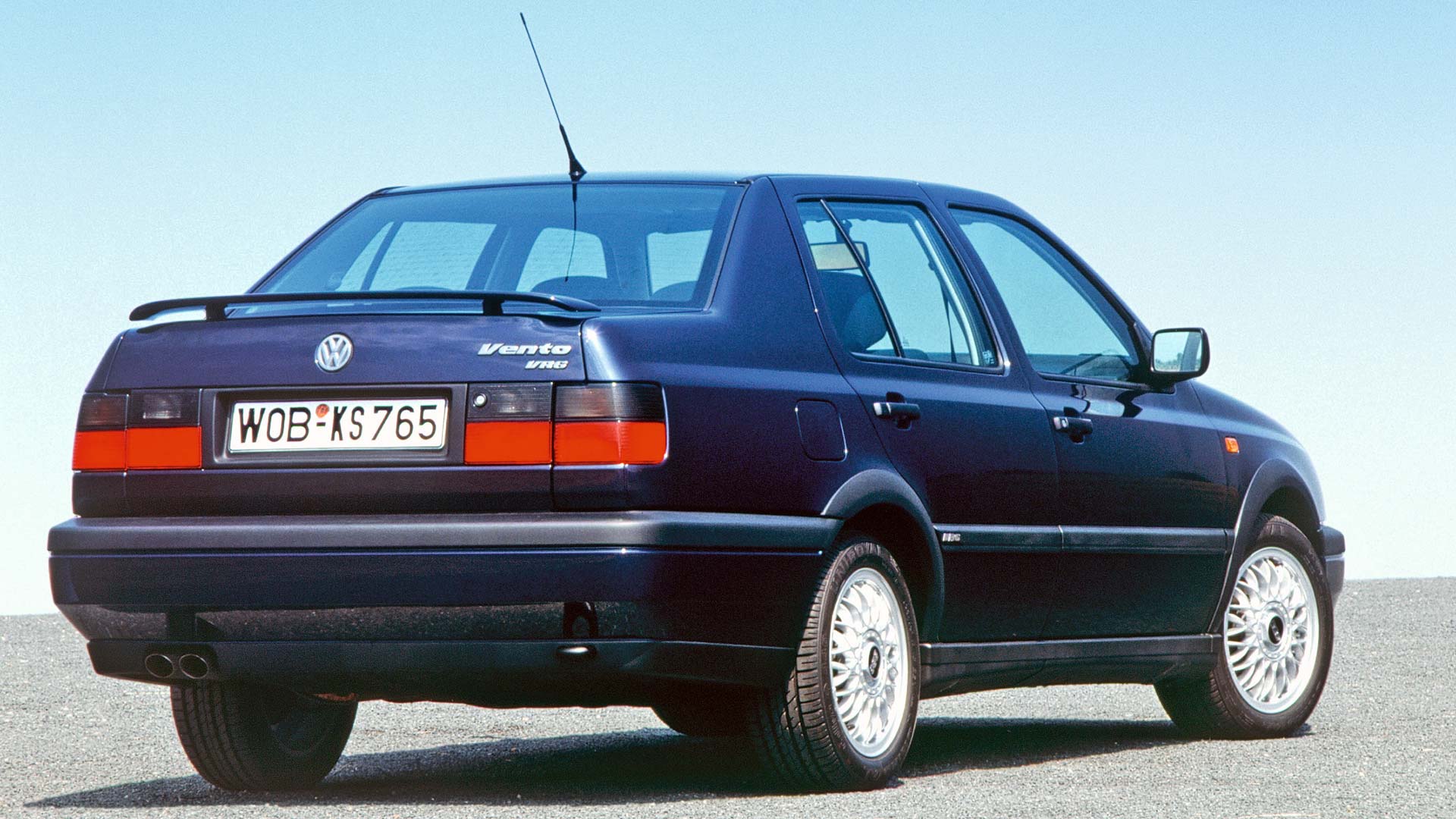 With extra weight came the need for extra power to make a quick compact saloon. As with the Mk3 Golf, the sonorous 2.8-litre 172hp narrow-angle VR6 engine helped push the performance Vento upmarket.

In North America, the GLI badge took a sabbatical during the third-generation Jetta’s lifetime. Instead, range-topping VR6 versions were branded as ‘GLX’ models, focussing on sophistication along with a 0-60mph time of 7.7 seconds. 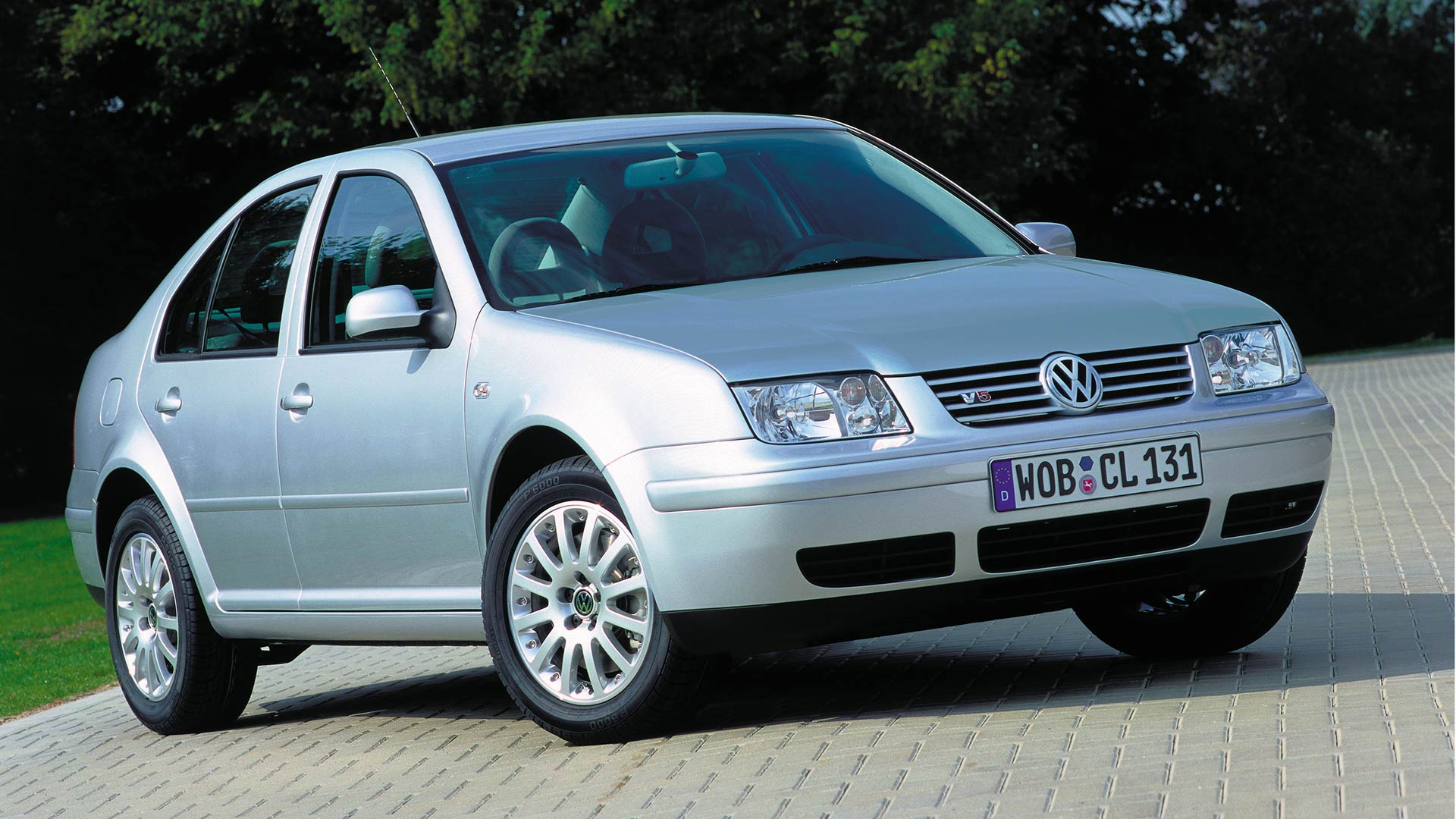 By the late 1990s, the Volkswagen Group had big plans for world domination. It also meant a push to move the Volkswagen brand itself to a more premium position. Platform sharing came to the fore, and the compact Golf-based saloon gained another new wind-based name.

Branded after a winter wind which blows across the Adriatic, the Bora was never going to win awards for exciting exterior design. At least the interior featured Volkswagen’s classy blue backlighting, whilst performance in early models came from the curious 2.3-litre V5 petrol engine. 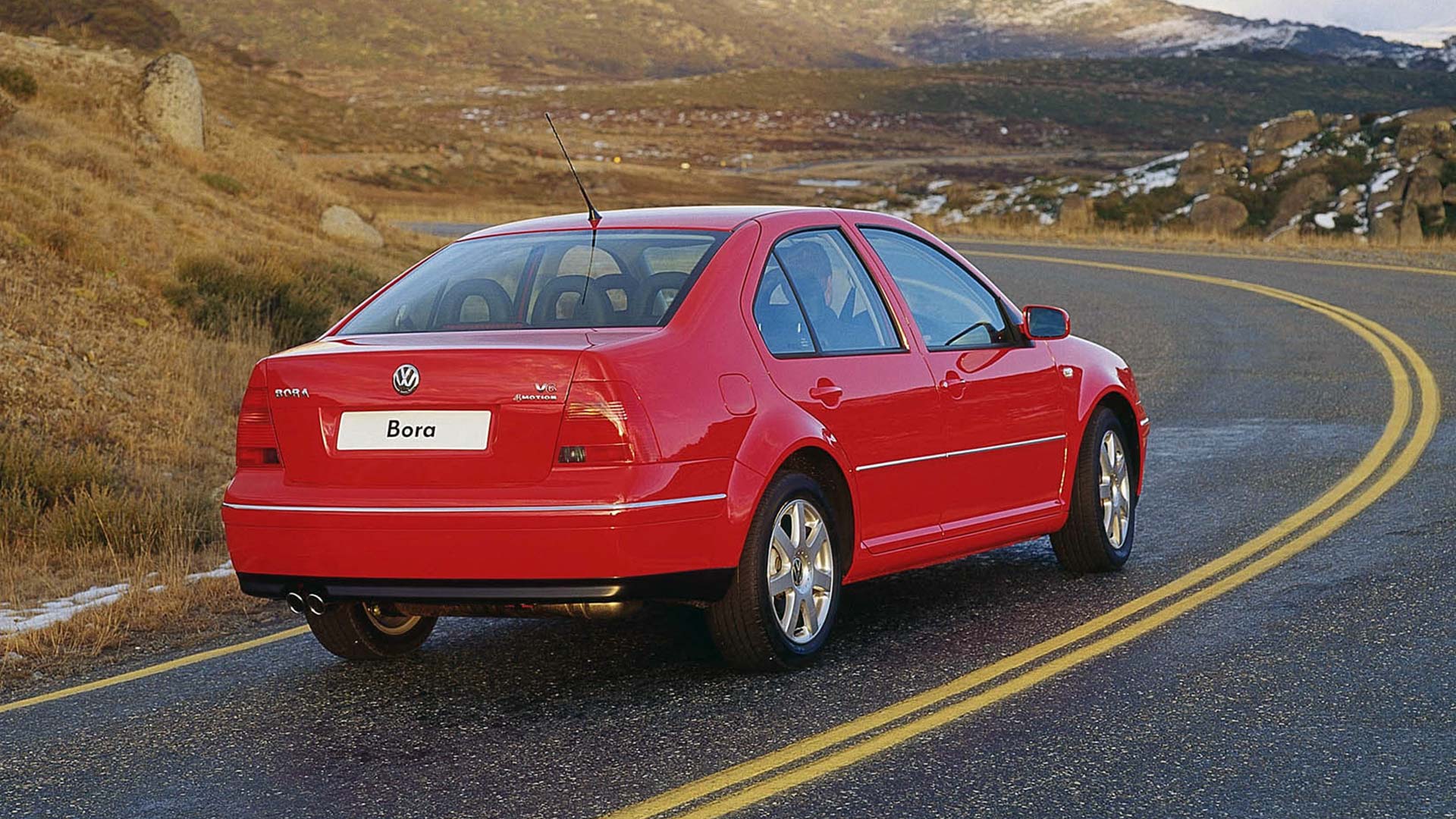 With the Bora destined to receive virtually every powertrain the Golf got, in 2000 this meant the return of the 2.8-litre VR6 engine. Now it had 201hp, and was mated to a 4Motion four-wheel drive system.

The V6 Bora was still more about junior executive cruising than outright performance, with an interior finished with wood trim and leather seats. Unsurprisingly, the 1.9-litre TDI diesel engines would be the ones everyone would actually buy. 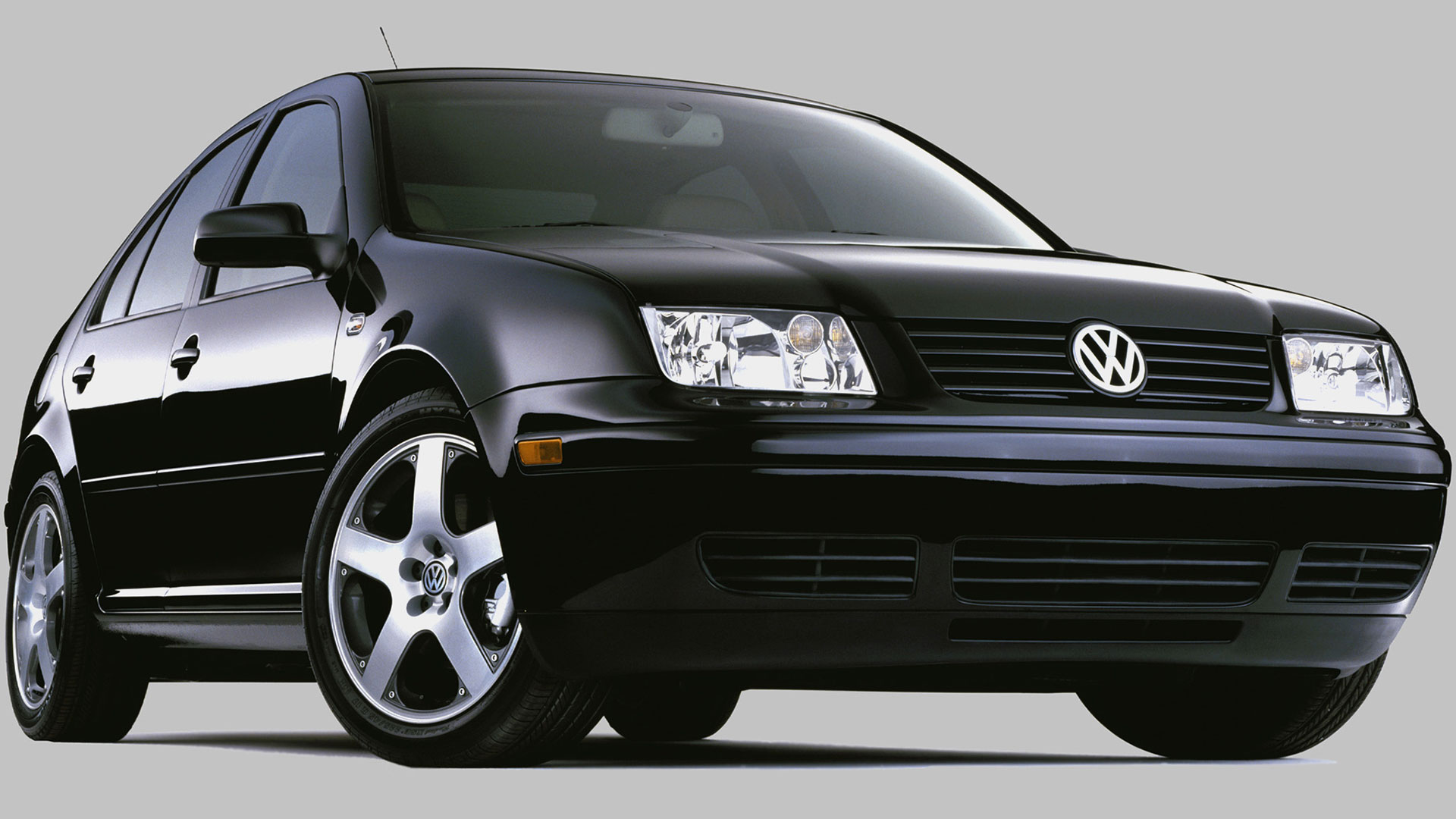 Back in the USA, the Jetta name lived on unadulterated, with the GLI model finally making a return in 2002.

As with the European Bora, quick USA Jettas meant the need for multiple cylinders. The 2.8-litre VR6 engine continued in service, producing 177hp and 181lb-ft of torque. US-spec versions did without the 4Motion system offered on the Bora, however. 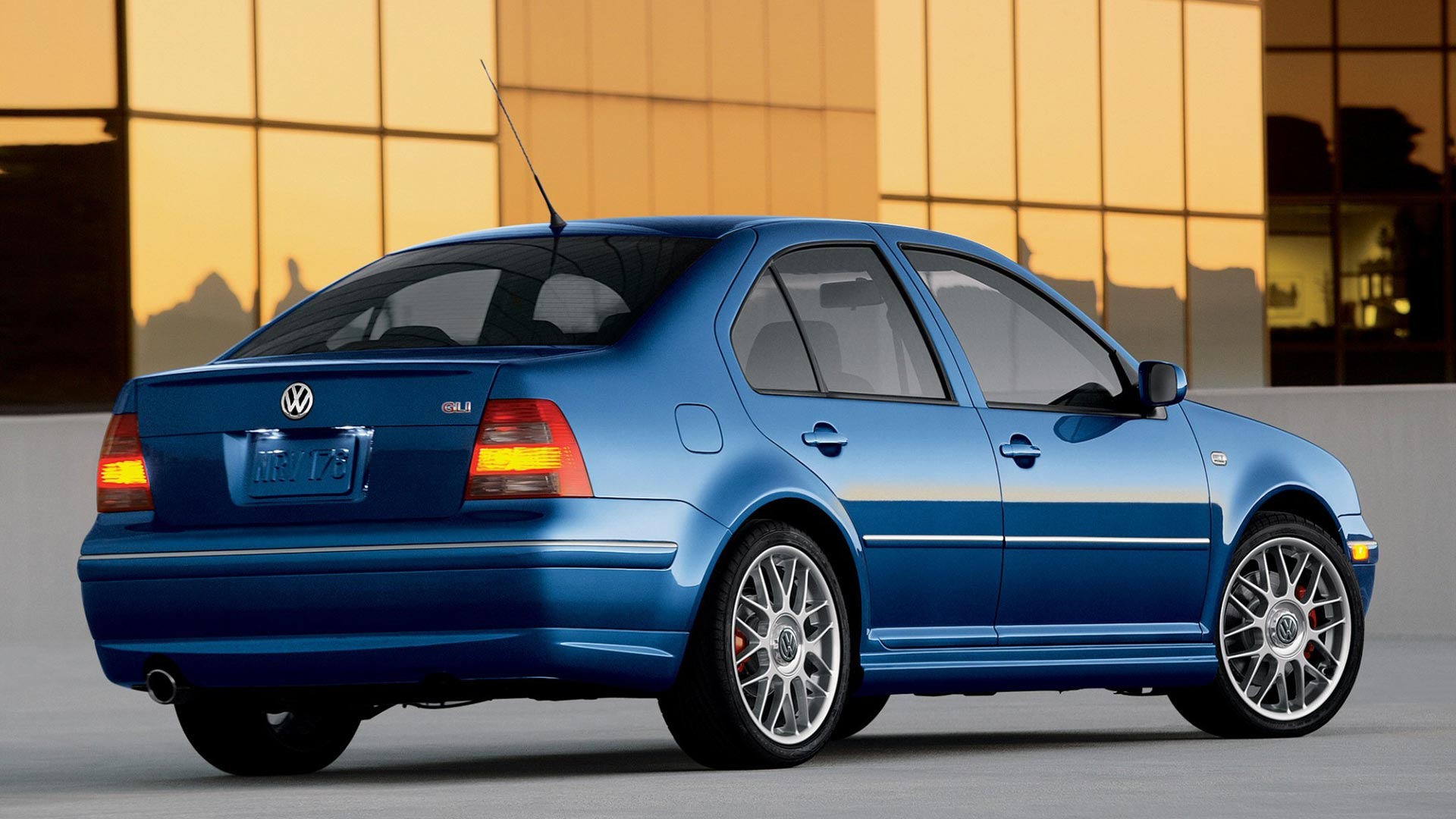 Not even the US-spec Jetta could avoid the pull of Volkswagen’s ubiquitous 1.8-litre turbocharged engine. In 2004 this meant a choice of GLI versions – the traditional V6, now with 197hp, or the 1.8T with 177hp.

Although the VR6 option may have been more powerful from the factory, the huge tuning market for the 1.8 Turbo meant it became the engine of choice for enthusiasts. ECU remaps, bigger turbochargers, and other modifications could easily push power to over 300hp. 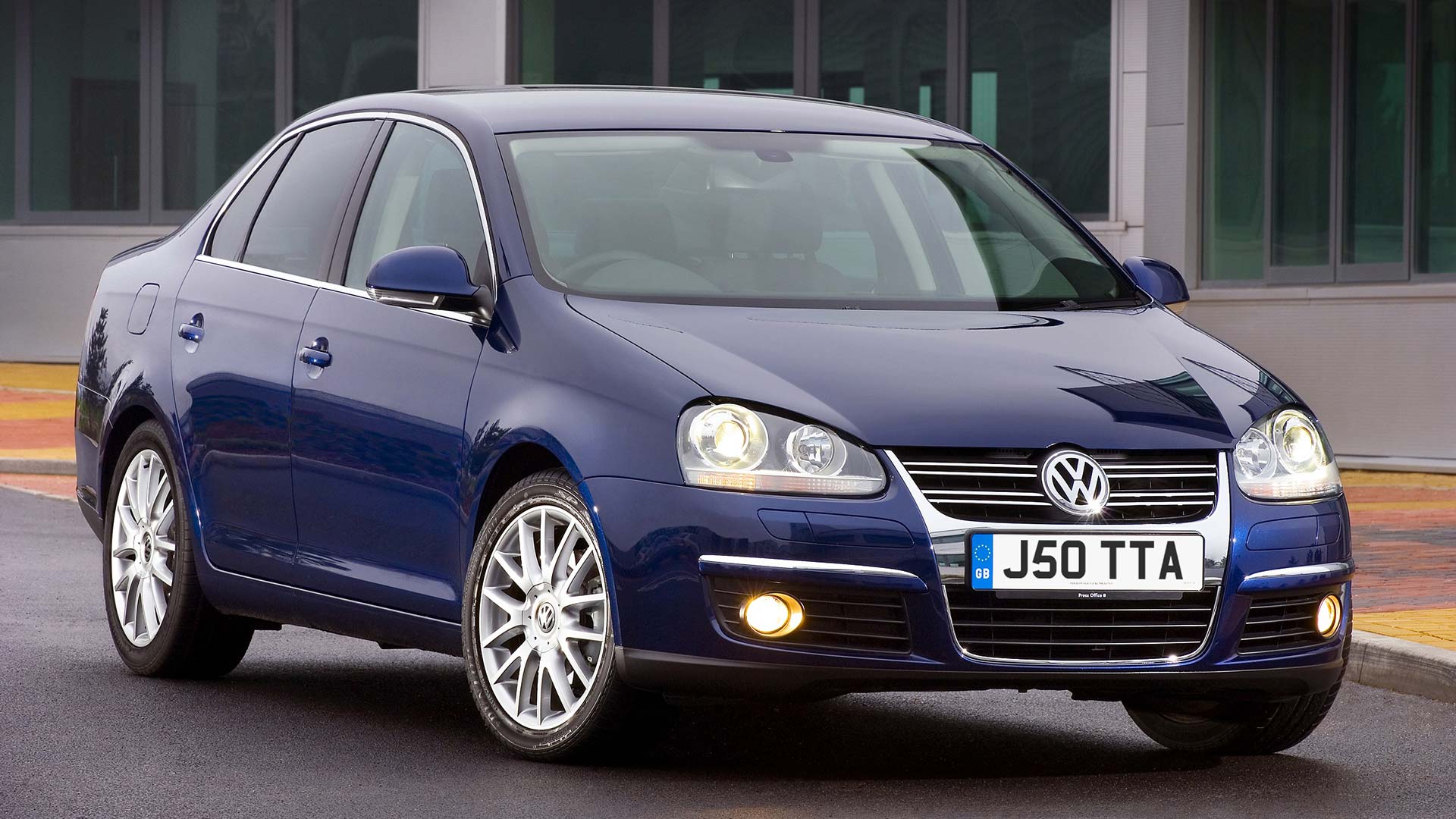 Reflecting the importance of the Jetta to America, the fifth-generation debuted at the 2005 LA Auto Show. It also went on sale in North America ahead of any other markets, with major investment in Volkswagen’s factory in Puebla, Mexico.

The biggest news was the return of the Jetta name to Europe, with Volkswagen seemingly having run out of new wind naming options. With a front-end strongly resembling the Mk5 Golf, albeit with extra chrome, the halogen headlights even featured tiny VW symbols covering the bulbs. 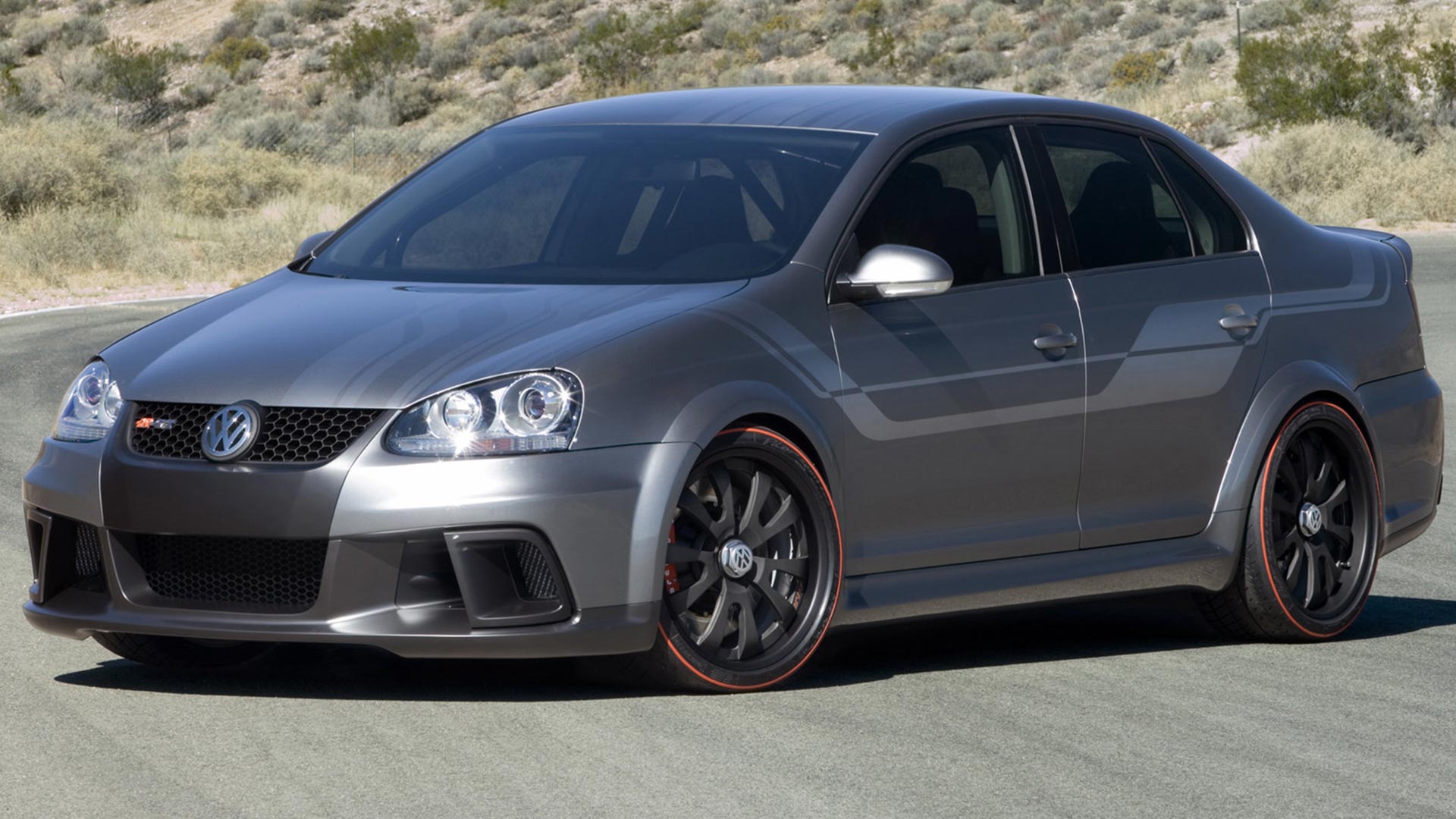 Previous Jetta models had found popularity with the American tuner scene – the original Fast and the Furious movie had even featured a Mk3 VR6 Jetta. It meant Volkswagen went chasing the modifying subculture hard with the Mk5 Jetta.

Appearing at the 2005 SEMA Show in Las Vegas, the Jetta R GT was meant to envisage what was possible with the new saloon. With a ridiculous 550hp twin-turbocharged 3.2-litre V6 engine, the R GT was as genuinely fast as the bespoke bodykit made it look. 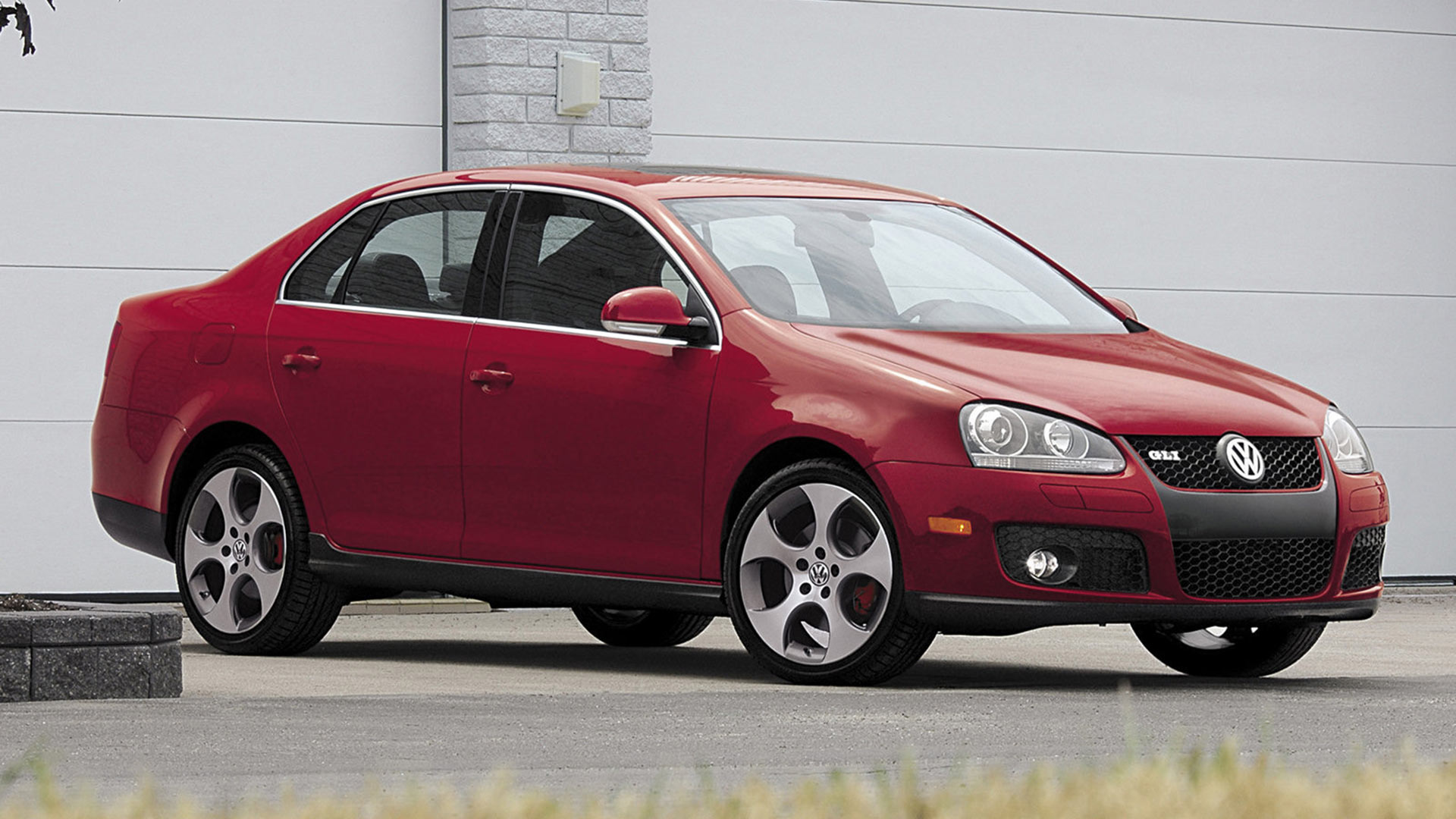 North American Jetta fans did not have to wait long for a true performance version, with the GLI appearing in 2006.

Appearing much like a Mk5 Golf GTI, but with a huge boot grafted on the rear, the Jetta GLI made a serious effort at being a performance saloon. The bodykit mimicked the Golf, even down to the red trim in the honeycomb grille, whilst the distinctive Monza alloy wheels also made an appearance. 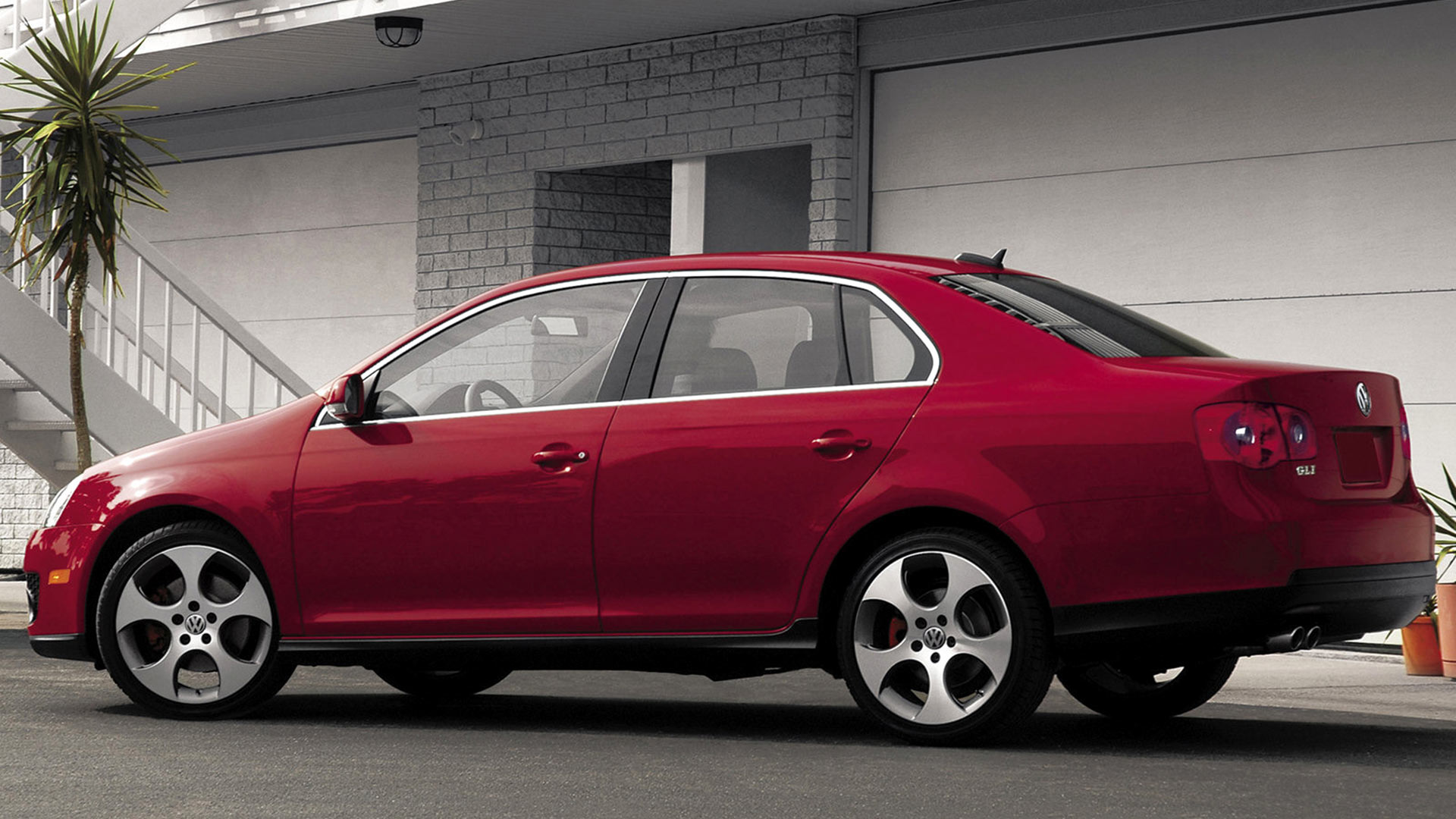 Under the bonnet was the same 2.0-litre TFSI petrol engine as the Golf GTI, producing 197hp and 210lb-ft of torque. A six-speed manual gearbox was standard, with a DSG dual-clutch optional.

European buyers were denied the full-fat GLI, but did at least get a ‘Sport’ trimmed car powered by the same 2.0-litre TSFI engine. But, being the mid-2000s, these would be extremely rare against a sea of 2.0-litre TDI diesel models. 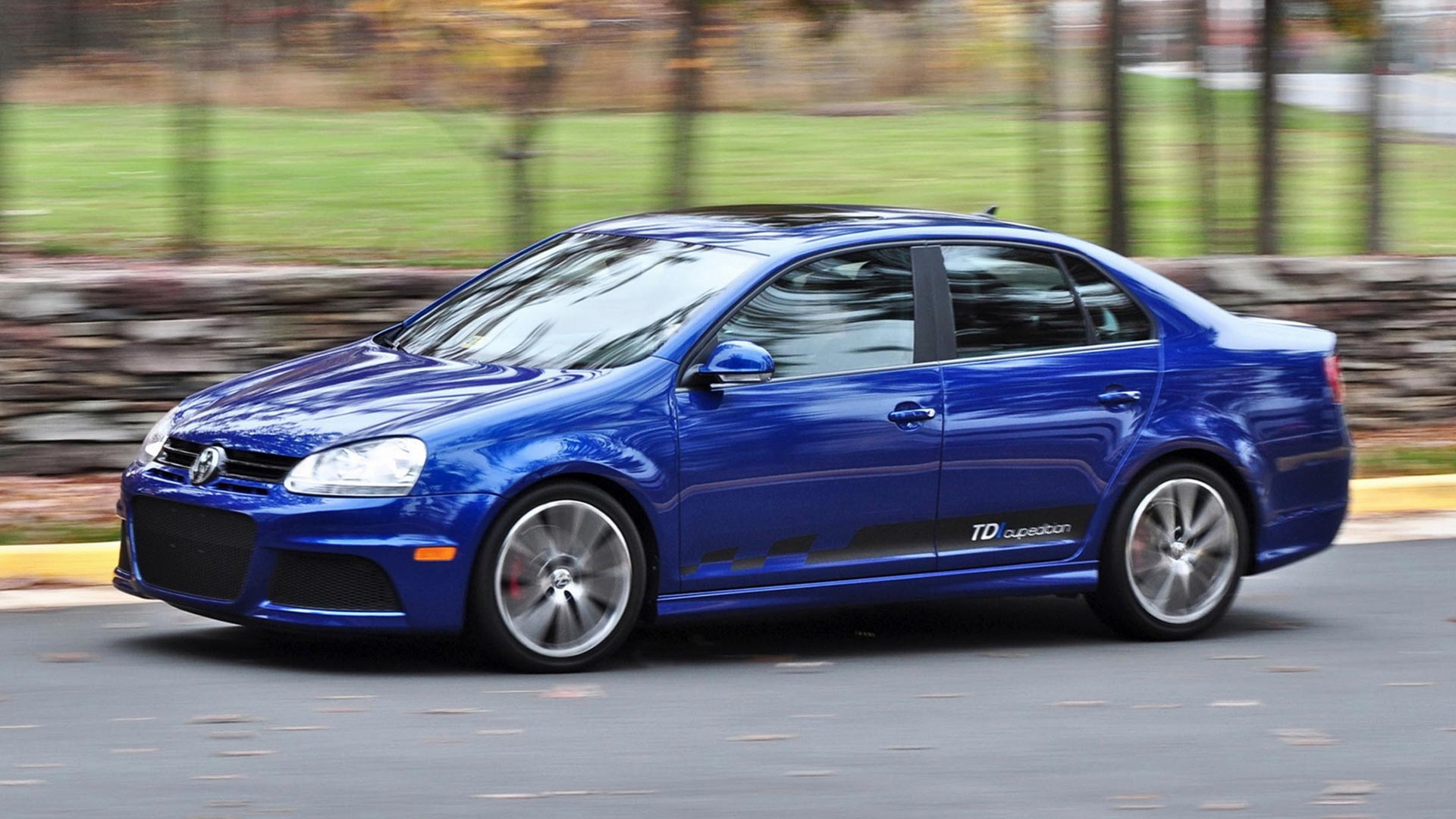 Despite the popularity of the GLI, Volkswagen was engaged in trying to win over American consumers to the idea of ‘clean diesel’ power. This was before the Jetta TDI would go on to be one of the cars implicated in the dieselgate scandal.

Between 2008 and 2010, Volkswagen ran a single-make championship, using a field of 2.0 TDI-powered Jetta racers. To celebrate the success of the TDI Cup, Volkswagen USA produced 1,500 TDI Cup ‘Street’ Editions. These wore a special bodykit, external graphics, and 18-inch alloy wheels. 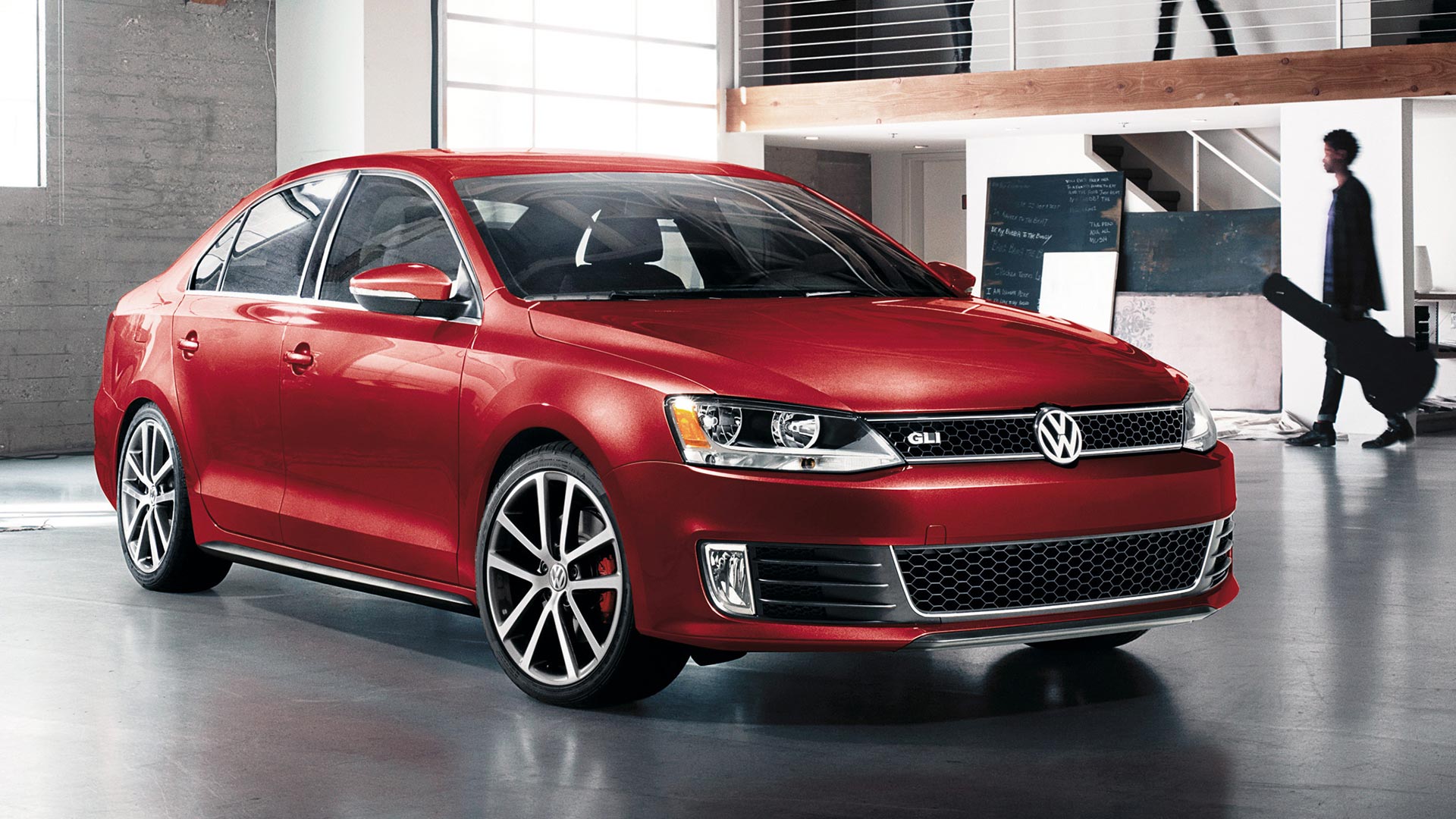 The sixth-generation Jetta ditched any family resemblance to the Golf, and started out on a separate path towards North American success. Whilst Europe and other markets ditched saloons in favour of SUVs and crossovers, the compact four-door would continue unabated in the US and Canada.

Subtler than the previous Jetta GLI, the Mk6 used a 200hp 2.0-litre turbocharged petrol engine, with the choice of six-speed manual or DSG dual-clutch gearboxes. Independent rear suspension was retained for the GLI – something ditched on lesser Jettas. 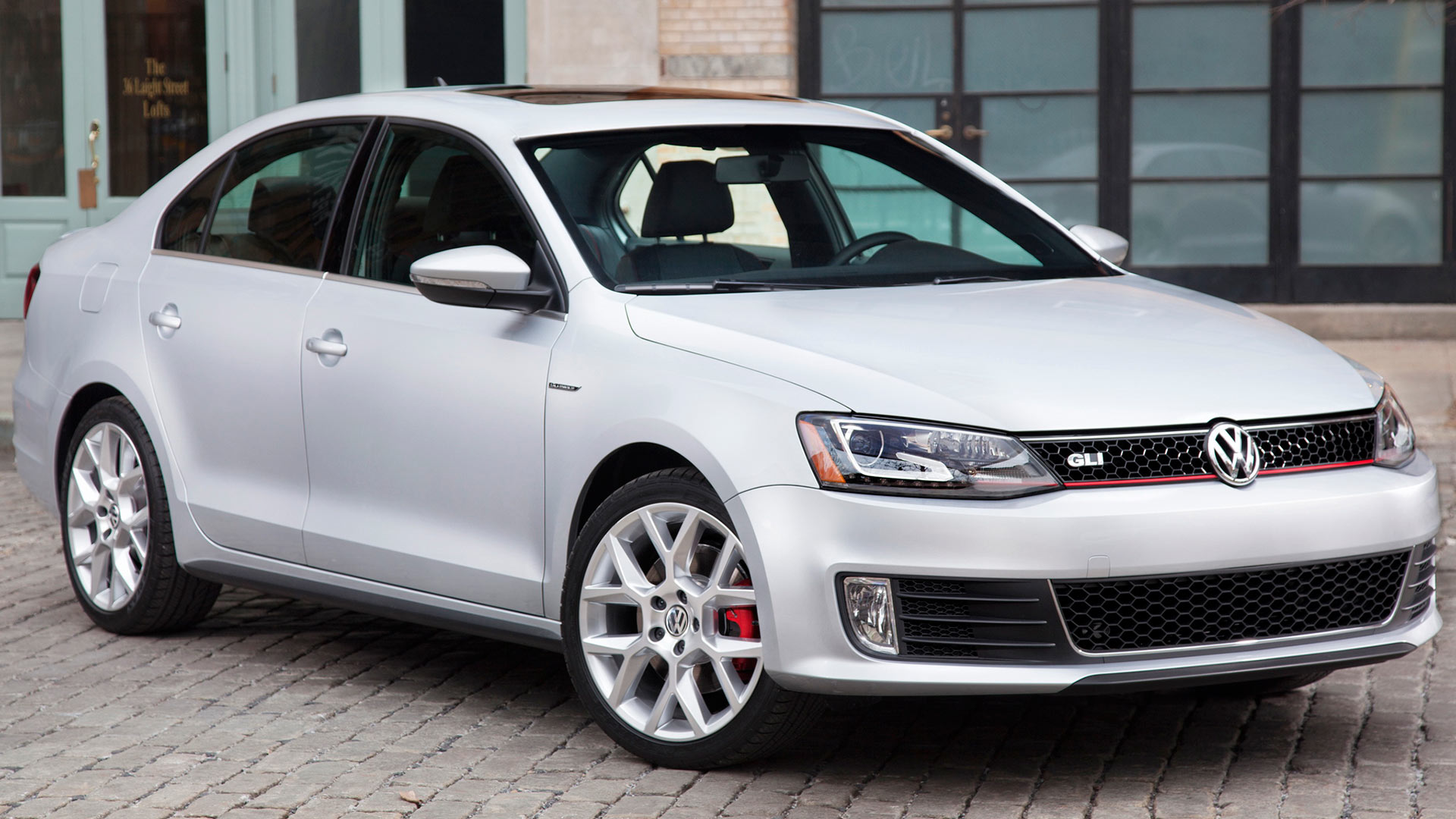 Although the rest of the world might have forgotten about the Jetta GLI, in North America the quick four-door celebrated an anniversary in 2014. Marking 30 years since the original 90hp Jetta GLI had hit the market, Volkswagen introduced a commemorative edition.

Red trim was back on the honeycomb front grille, with 18-inch alloy wheels beefing up the exterior. Inside was a riot of leather trim, red stitching, carbon fibre details, and special Edition 30 badging, of course. 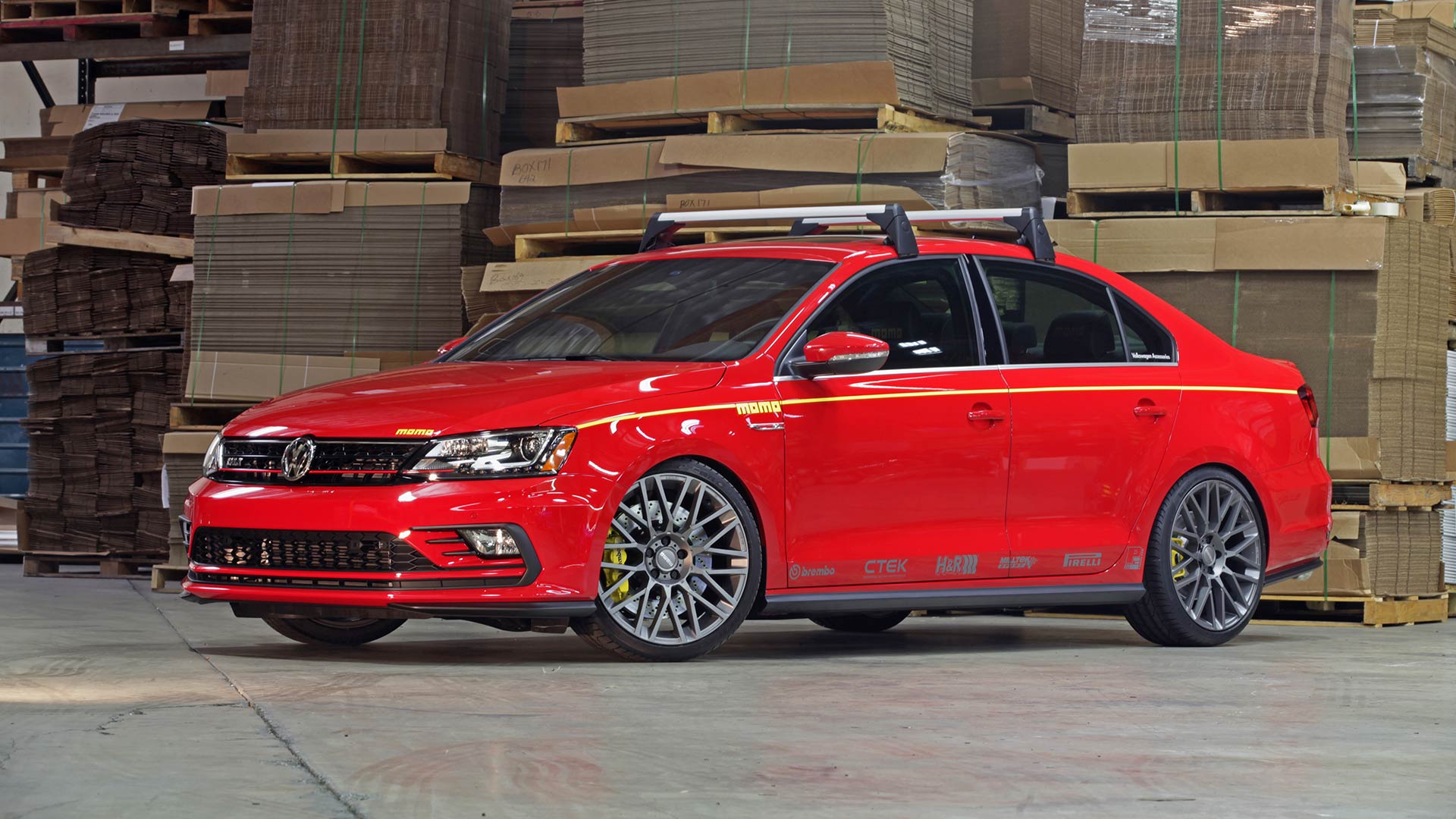 Maybe to divert attention away from dieselgate, Volkswagen displayed an impressive modified Jetta GLI at the 2016 SEMA Show. Slammed to the ground on adjustable coilover suspension, and wearing 19-inch alloy wheels, the tuning makeover was done by Italian aftermarket firm Momo.

Sadly, the Momo Edition was just a one-off show car, albeit one meant to demonstrate what the Jetta could achieve. Meanwhile, across the Atlantic, the Jetta was slowly being removed from model ranges across Europe. 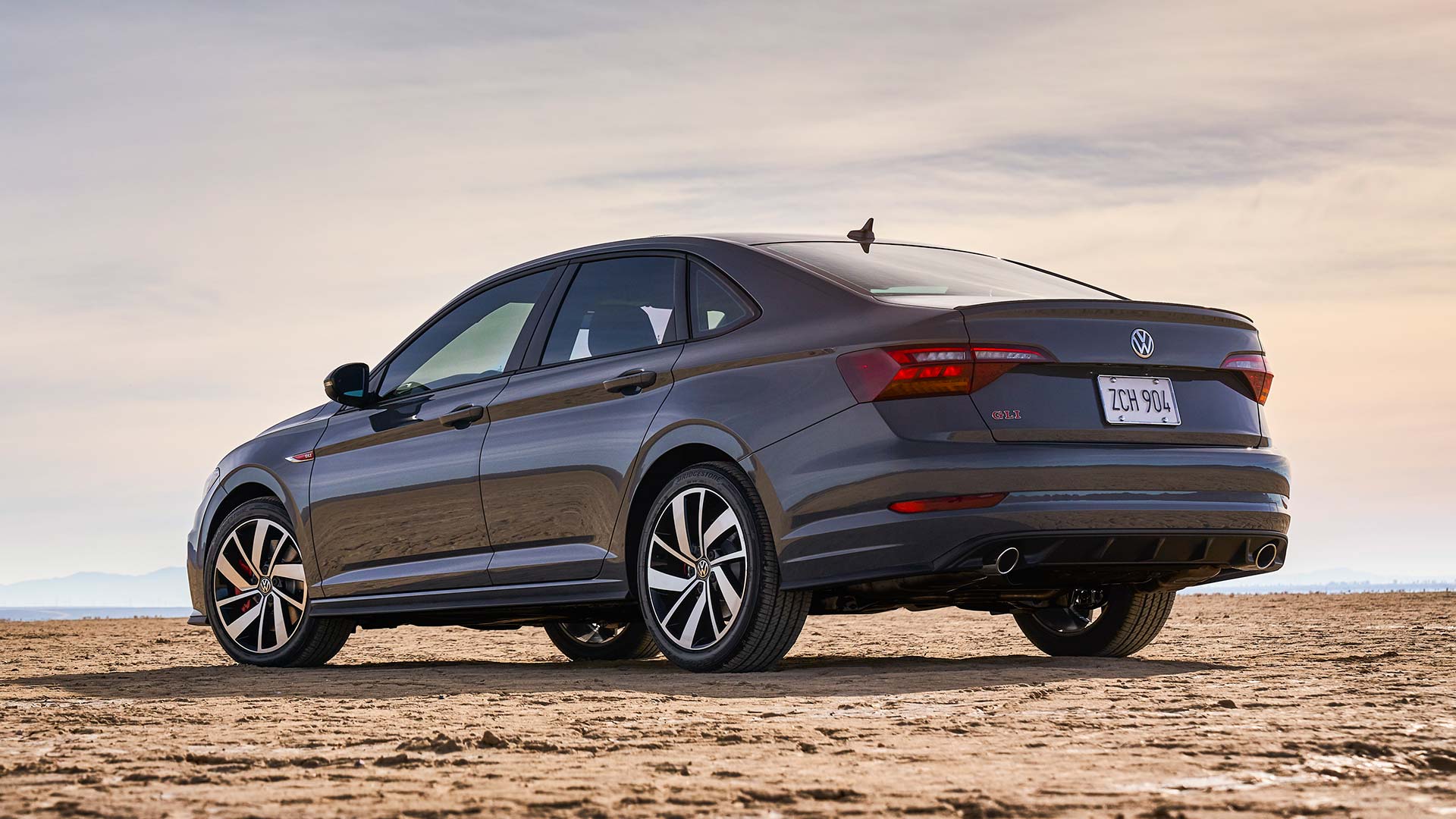 Whilst the fast Jetta may be dead to European buyers, in America it is still as popular as ever. Following the launch of the seventh-generation Jetta in 2018, Volkswagen USA unveiled the all-new Jetta GLI at the 2019 Chicago Auto Show.

As the most powerful production Jetta GLI yet, the 2.0-litre TSI engine produces 228hp and 258lb-ft of torque. A limited-slip differential is standard, as is a six-speed manual gearbox. 18-inch alloy wheels, aggressively designed bumpers, and lowered suspension give it a serious stance.

A 35th Anniversary Edition will also be available, celebrating the continued success of the hot Jetta. If only we European buyers had kept in touch, look what we could have had…