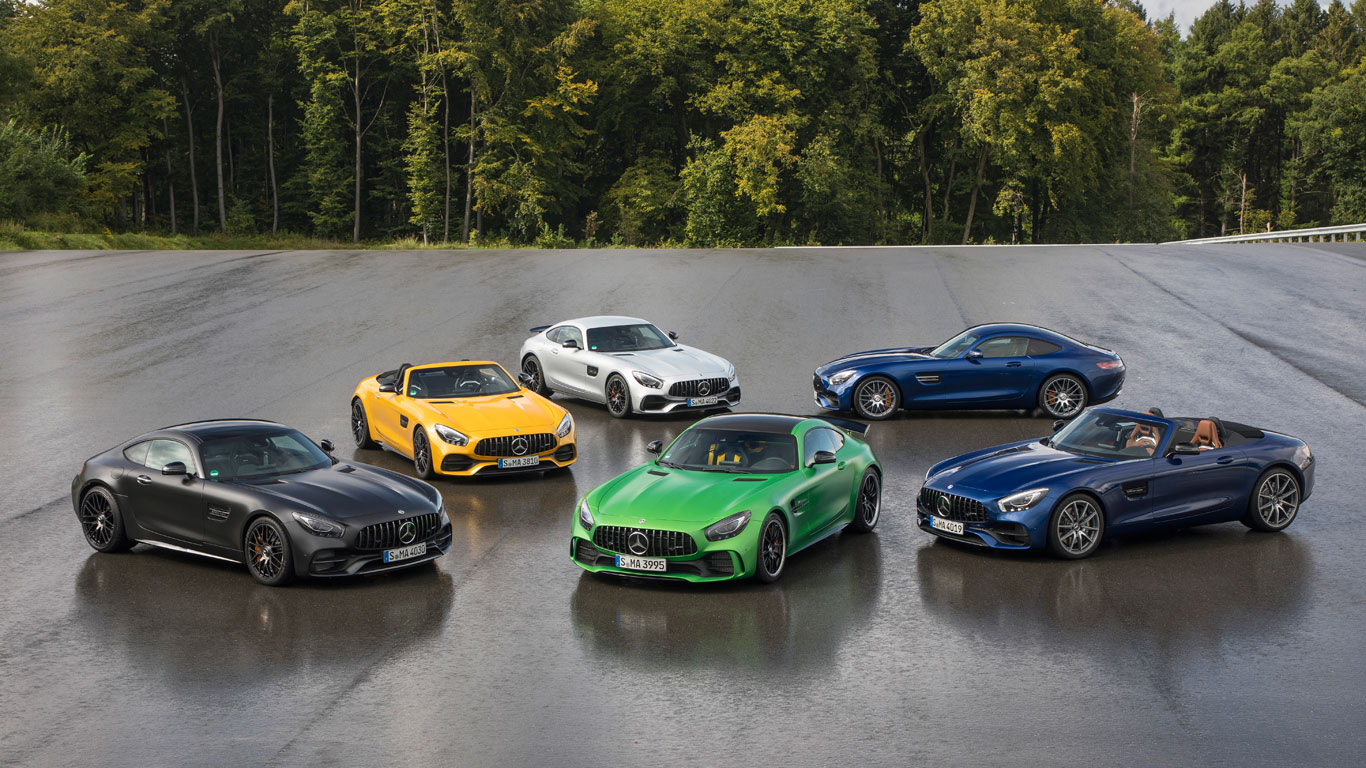 The ever-growing Mercedes-AMG GT range is a tricky one to get your head around. Just as Porsche doesn’t hold back on launching new variants of its 911, you’ll soon be able to visit your Mercedes dealer and buy an AMG GT with the exact power for your requirements. Kind of.

In the name of consumer research, I travelled to Germany to drive the entire AMG GT range and work out which you should spend your money on. Here’s how I got on. 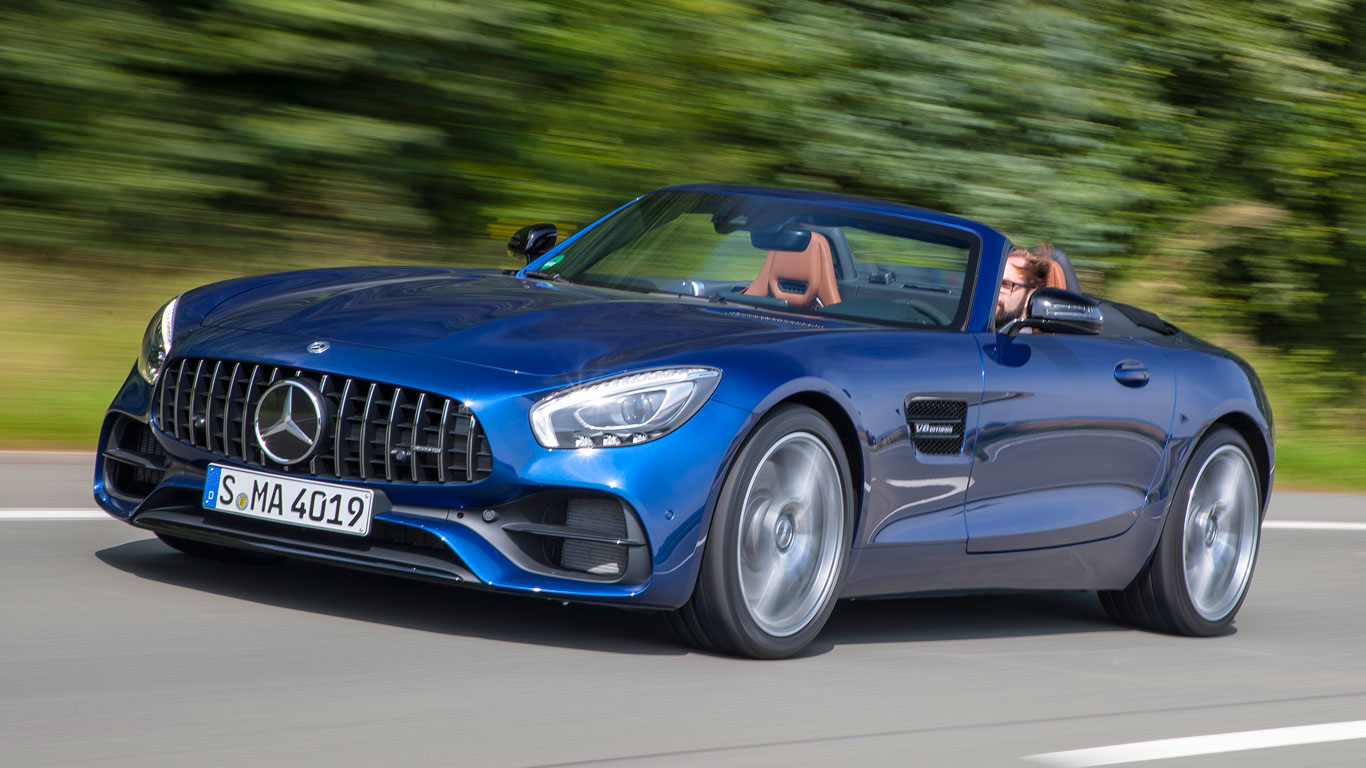 The entry-point to the range, the ‘humble’ GT is powered by the same 4.0-litre twin-turbocharged V8 as the more powerful models. Unlike its main rival, the Porsche 911, the GT’s engine is located in the front of the car, but positioned as far back as possible in what Mercedes describes as a ‘front-mid engine configuration’. Power goes to the rear wheels via a seven-speed dual-clutch automatic gearbox.

Mercedes offers the standard GT in Coupe or Roadster guises, the latter with an electrically-folding fabric roof. I opted for the latter: if only for maximum exposure to the standard AMG performance exhaust system.

If, like me, your first AMG GT exposure is the entry-level model, you’ll find yourself wondering how anyone could want anything more. You sit directly over the rear wheels, with a huge bonnet stretching out in front of you. It feels special from the second you sit in it, helped by the trademark Mercedes-Benz quality interior.

Initial reports on the AMG GT, when it came out in 2014, complained the steering was nervous and slightly remote. Since the range was tweaked earlier this year, the steering is still on the light and uncommunicative side, but it feels less darty than it did. If the steering is the GT’s low point, the engine must be its high point. Not only does it sound the part (especially with the sports exhaust button pressed) – almost muscle car V8-esque – it’s also immensely tractable. There’s next to no turbo lag – thanks to the turbochargers’ location within the V of the cylinders – and it’ll just keep pulling throughout the rev range. As an entry to the line-up, the GT feels pretty much unbeatable. 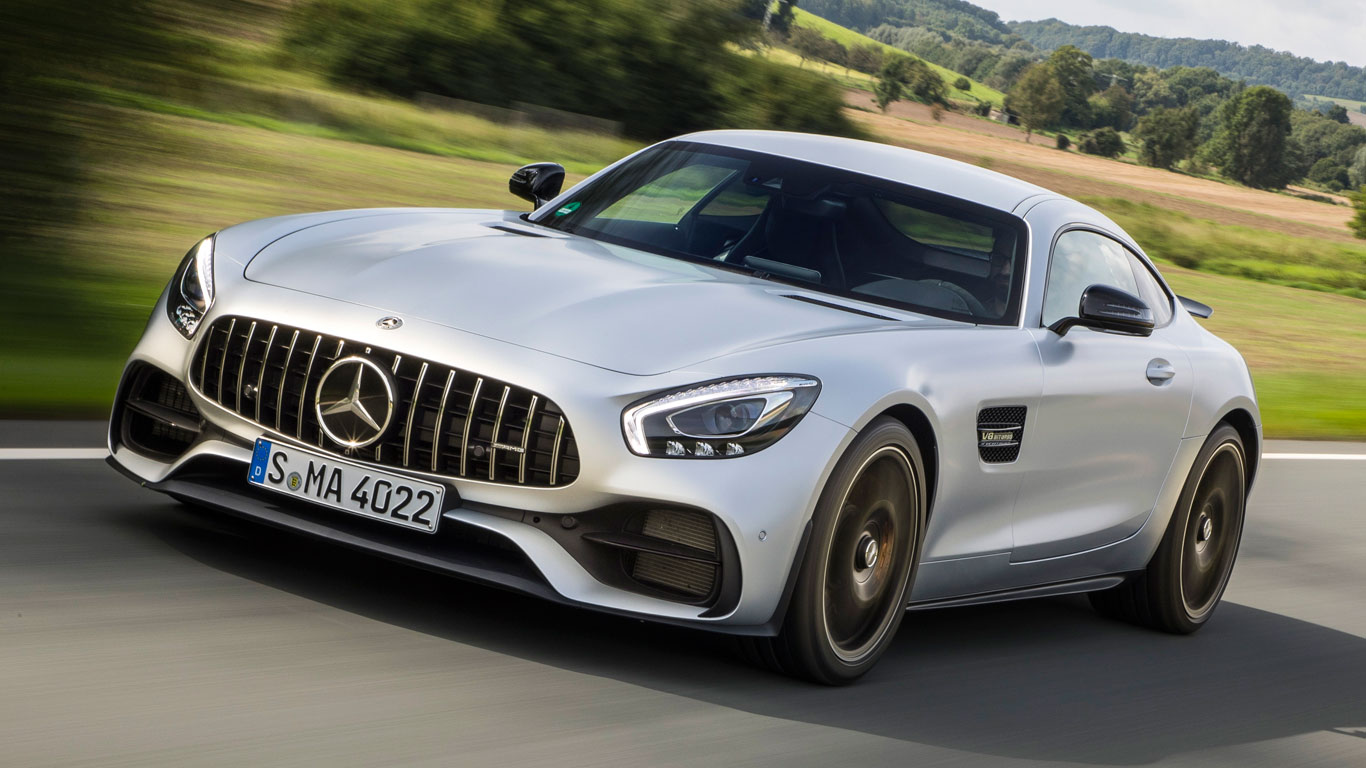 So how has Mercedes gone about improving on the GT? While no one could accuse the GT of needing more power, it was an obvious upgrade for the S. The standard car’s mechanical limited-slip diff has been replaced by a trick electronic one (I’m sure it will save, oh, milliseconds of slip when getting the power down out of corners). Bigger brakes bring it to a stop quicker, while AMG Ride Control with three-stage adaptive dampers provides a more focussed feel.

Suddenly, the standard AMG GT feels a bit soft. Even left in Comfort mode, the GT S’s dampers provide a harsher ride than the GT with little roll, while firming things up makes for near-flat cornering. The steering is improved, too, and you can opt for four-wheel steering on the S, should you want a smaller turning circle around town. The result is a car that’s more than the sum of its parts: while the GT has an element of (very fast) boulevard cruiser about it, the GT S feels like an out-and-out sports car.

In many ways, I reckon the GT S is the ultimate AMG GT. It’s the perfect compromise between hardcore sports car and useable road car, and cosmetic upgrades including 10-spoke alloy wheels mean it looks the part. 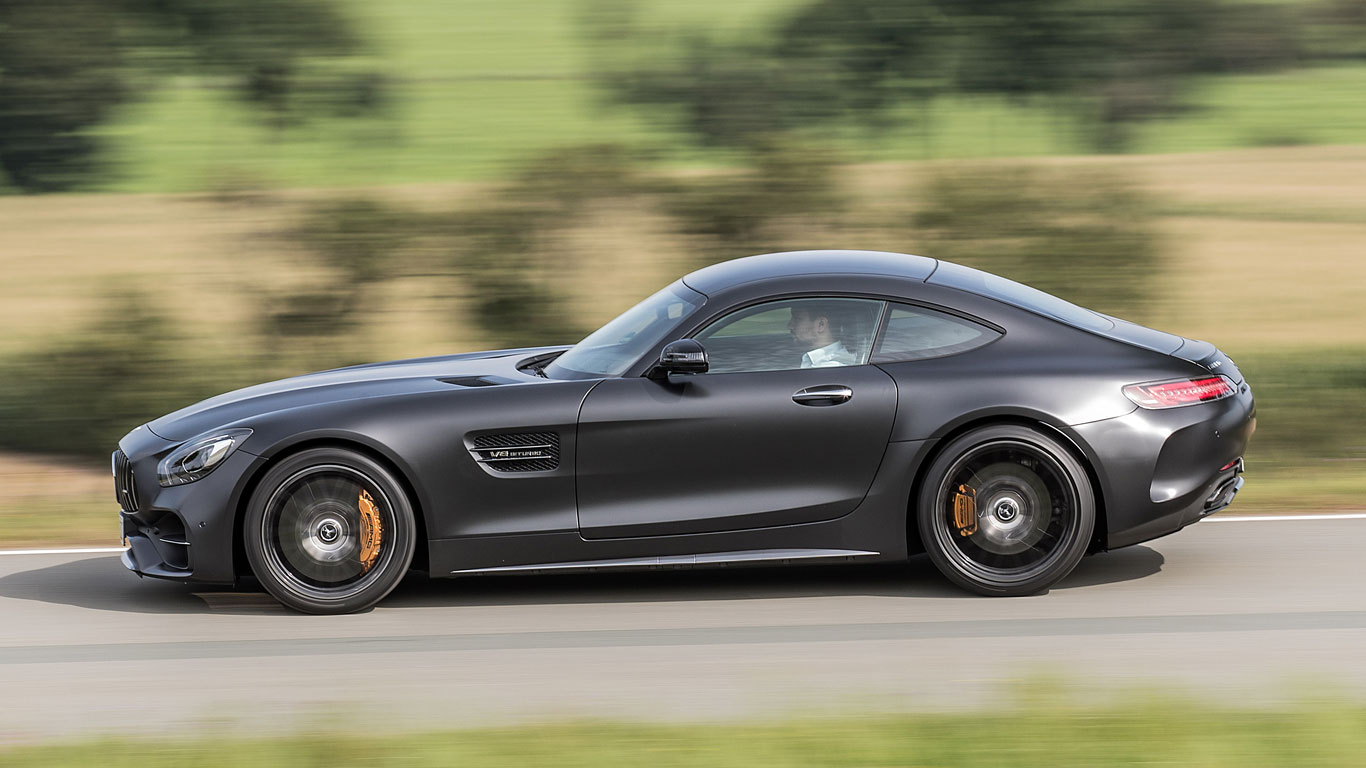 The Mercedes-AMG GT C is the latest addition to the range. Unlike the S, the C is available as a coupe or convertible, but currently only as the ‘Edition 50’ special edition, celebrating 50 years of AMG. It’s 57mm broader than lesser models, allowing room for a wider rear track and wider rear wheels. It also gets the active rear steering from the R (optional on the S, standard here), while cosmetic upgrades include matte grey paint, black chrome trim and bespoke alloy wheels.

It really looks the part: much meaner than the GT and GT S, thanks to its wider stance.

I haven’t mentioned the extra power from the handbuilt 4.0-litre twin-turbo V8. The C boasts 557hp – up 35hp from the S and 81hp from the standard GT. As before, torque is available from low down, and there’s little in the way of turbo lag. The performance is incredible, obviously, while the quick-witted steering makes a bulky car feel agile. It’s more vocal than the S, too, thanks to the C’s unique performance exhaust system with adjustable flaps able to make the car noisier or quieter, depending on your mood.

While I reckon the GT S will be the perfect quick road car for most drivers, the C offers that little bit more bite for anyone brave enough to take a £140,000 car on a track day. 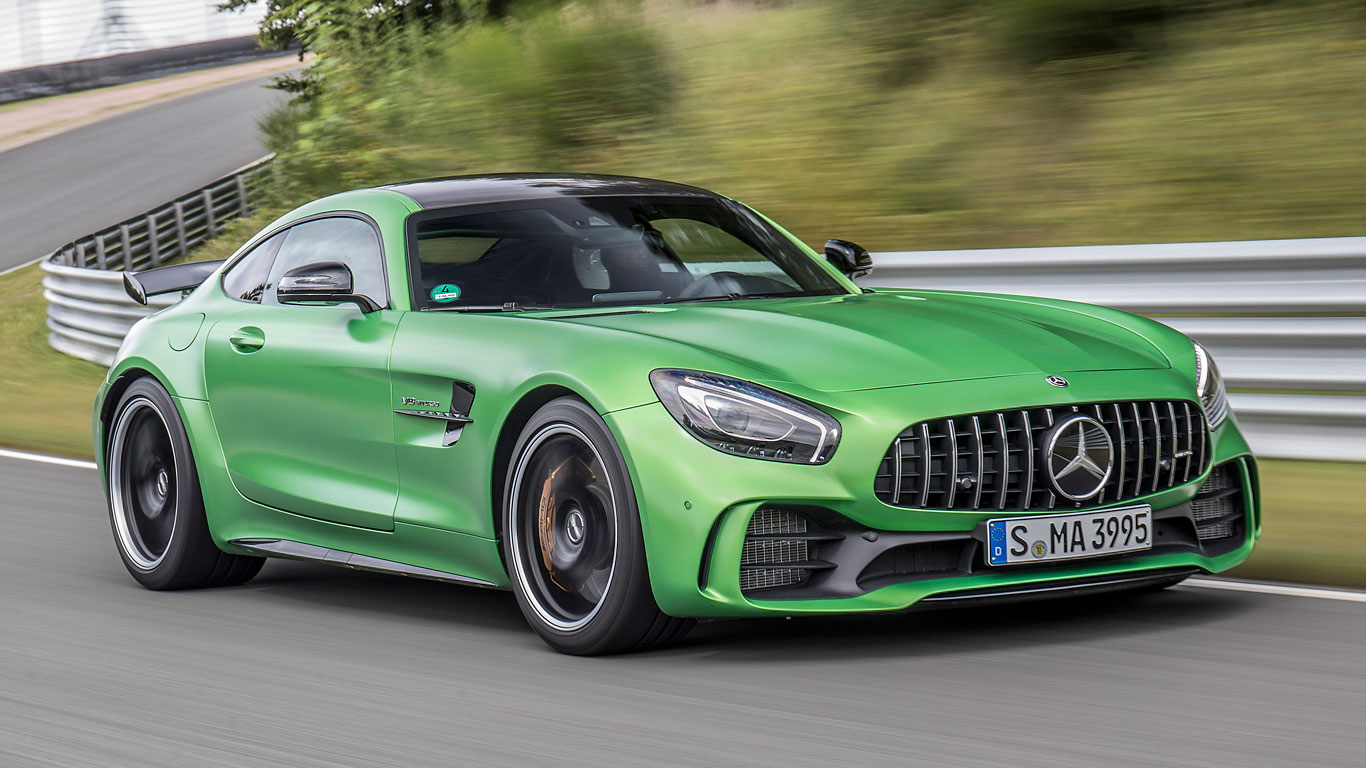 So we come to the daddy of the range: the hot-tempered AMG GT R. Mercedes describes it as a “racing car approved for use on public roads,” and I find it hard to disagree with that. It forms the basis of the AMG GT4 customer racing car, with carbon fibre body panels, four-wheel steering, and active underbody aero. You can even spec an optional AMG Track package, made up of a roll bar and four-point seat belts.

My first drive of the GT R was on the Bilster Berg test track in Germany. As you’ll see in the pics used to illustrate this story (and the video below), it’s a complicated track: a mini Nurburgring, with terrifying crests, blind bends and little opportunity to take a second’s breather. A 585hp ‘racing car for the road’ was exactly what I need to familiarise myself with this complicated track, then.

That engine, in full psychopath guise, only requires the shortest of straights to propel the GT R well into three-figures, but fortunately the optional ceramic brakes scrub speed off quicker than you can utter a four-letter profanity. The corners are the fun bits, though, where the R’s quick steering makes it feel like a much smaller car, albeit one that’s almost too keen to let the rear end step out, especially in the more dynamic driving modes.

Of course, many GT R buyers won’t go near the track. I’ve also driven the GT R on UK roads where, frankly, it feels a little bit like overkill. In the wet, it struggles for grip, with the traction control light flickering at the slightest hint of enthusiastic throttle use. Standard Michelin Pilot Sport Cup 2 tyres will partly be responsible for that, not to mention 585hp through the rear wheels, but in the dry it’s a much more confidence-inspiring car. That’s until you get to city centres, where the GT R’s mass will put you on edge. It gets so much attention, too, so you’re always conscious that you don’t want to mess up in case someone is watching. That’ll appeal to some people… me, I’d prefer the comparatively subtle GT S.