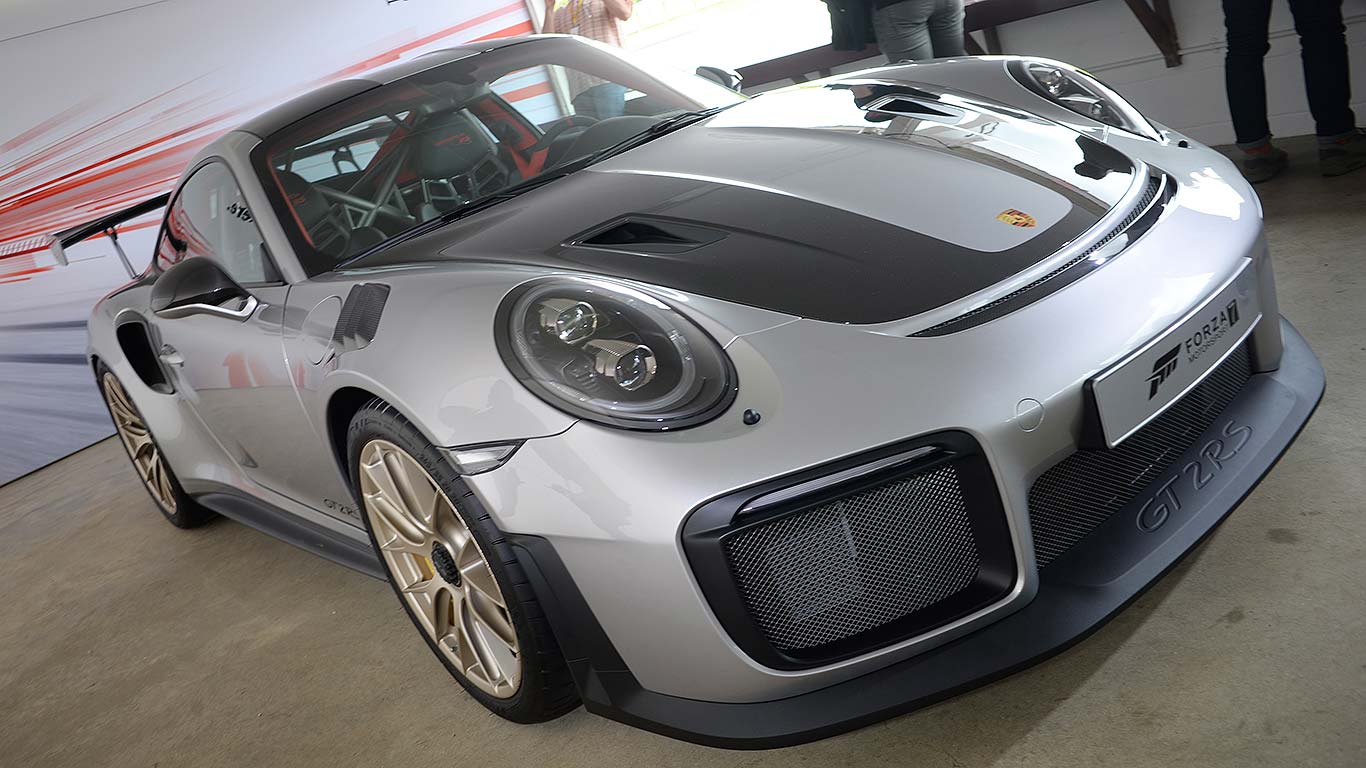 Porsche has revealed the new 911 GT2 RS at the Goodwood Festival of Speed – a 700hp 3.8-litre twin-turbo beast that’s the most powerful Porsche road car ever made. It can do 211mph, 0-62mph in 2.8 seconds, weighs less than 1500kg and, simply, is the most ferocious iteration yet of the world’s most famous sports car.

Porsche already pushed the turbo motor from 580hp to 607hp in the 911 Turbo S Exclusive Series. The GT2 RS adds a ludicrous amount of extra power, so much so that it needs a custom-built seven-speed PDK gearbox that’s strong enough to cope. Porsche is promising a mesmerising sound, even for a turbo engine, thanks to a lightweight titanium exhaust that weighs a hefty 7kg less than the standard system and delivers a noise that’s “without precedent”.

It puts all this power to the ground through steamroller-like 325/30 ZR21 rear tyres (the widest ever fitted to a 911), with 265/35 ZR 20s at the front. Stopping is courtesy of standard Porsche Ceramic Composite Brakes and, through the corners, rear axle steering and specially calibrated stability control give it the dynamics to match its crazy power output.

Of course, there’s lots of lightweight stuff: carbon fibre reinforced plastic is used for the front wings (and their vents), door mirrors, air intakes, bonnet and some of the rear end. Meanwhile, Porsche has actually made the roof from magnesium.

You can go further, too. Remember how you could have an optional Weissach package with the 918 Spyder hypercar? You now can with the new GT2 RS. Saving 30kg, it includes yet more carbon fibre reinforced plastic and titanium bits: we’re talking carbon fibre anti-roll bars here, magnesium wheels, a carbon fibre roof – with a body-coloured central stripe on the luggage compartment lid and roof to differentiate the Weissach cars.

Surprisingly, Porsche leaves the Chrono Package on the options list, so you’ll have to pay extra if you want to monitor your lap times. As you undoubtedly will, particularly as the system now includes a lap trigger – with the Porsche Track Precision app and some external timing markers on a course, you can ‘cross the beam’ just like they do in F1. That’s surely a must-have, no?

This is the second special Porsche to have its own watch. Porsche Design has worked with Porsche Motorsport to create the 911 GT2 RS Chronograph – using Porsche Design’s very first clock movement, which took it three years to develop. It includes a motorsport-inspired ‘flyback’ function, that automatically does all the choreography used when timing laps. Again, priorities.

Porsche racer Mark Webber helped reveal the new 911 GT2 RS at the Goodwood Motor Circuit. “This is probably the 911 I’ve driven most pre-launch,” he said. “Andreas (Preuninger, Porsche GT boss) got me on board… I’ve already driven it plenty, including at the Nürburgring. Believe me, it’s a beast…”

Apparently, some of Webber’s ex-F1 buddies are already on the phone to him, seeing if he can get them ahead in the waiting list. But it sounds like it’s on Webber’s hit list, too – because of it’s all-round usability. It’s comfortable and usable on public roads,” says Porsche. “Compared to the last GT2 RS, we have civilised it, a little bit.”

Webber picked up on this. “A lot of the GT cars I have in the family… I always take navi and air con.” Not that this has at all softened it, he added. “In general, she’s a thoroughbred, an absolute beast, but you can take it on the road no problem.”