Picture your lottery-win fantasy garage: polished floors, gleaming white walls and rows of rare, exotic Ferraris, Aston Martins and Lamborghinis. That’s the scene greeting me as the door glides back and I enter a cool, dehumidified chamber known as the ‘bat cave’. I’m at a secret location underneath Shepherd’s Bush, discovering where Londoners store their supercars. Welcome to Windrush.

Founded by Tim Earnshaw after he quit a job managing logistics for Ferrari’s F1 team, Windrush offers secure storage for special cars. Not everything here is worth six or seven figures, though – some simply have sentimental value. “We had an Austin Metro City that a client bought because he’d passed his driving test in one,” explains Tim. “Each car is treated equally, though, irrespective of whether it’s a Metro or a McLaren.”

At the moment, all the cars are covered up, but I’m itching to discover what lies beneath. First though, let’s meet the man himself.

Tim’s love of cars started at school, where he bunked off games lessons to help at a firm building Lotus 7 replicas. When the gearbox broke on his parents’ Land Rover, he took it to the workshop and repaired it himself. “It was incredibly satisfying,” he remembers.

Soon he began work on his own replica, using a Morgan 4/4-style body and MGB mechanicals. “The process took five years,” says Tim, “but I learned how to fabricate, weld, panel-beat, fit a wiring loom and much more.” The finished car was his pride and joy, but several months of parking on the family farm took their toll…

“Windrush started from the simple need to store the car,” Tim explains. “I set to work converting one of the farm out-buildings into a clean, secure lock-up, but there was plenty of surplus space. I saw a business opportunity.” He advertised locally and soon had a Jaguar E-Type and Mitsubishi Evo VI alongside his ‘Morgan’. “I built a website and the company grew from there, although it was five years before I took the plunge and left Ferrari.”

Today, Windrush stores, cleans and maintains around 300 cars: 200 in the Cotswolds and 100 in the London location we’re visiting today. Time for a guided tour… 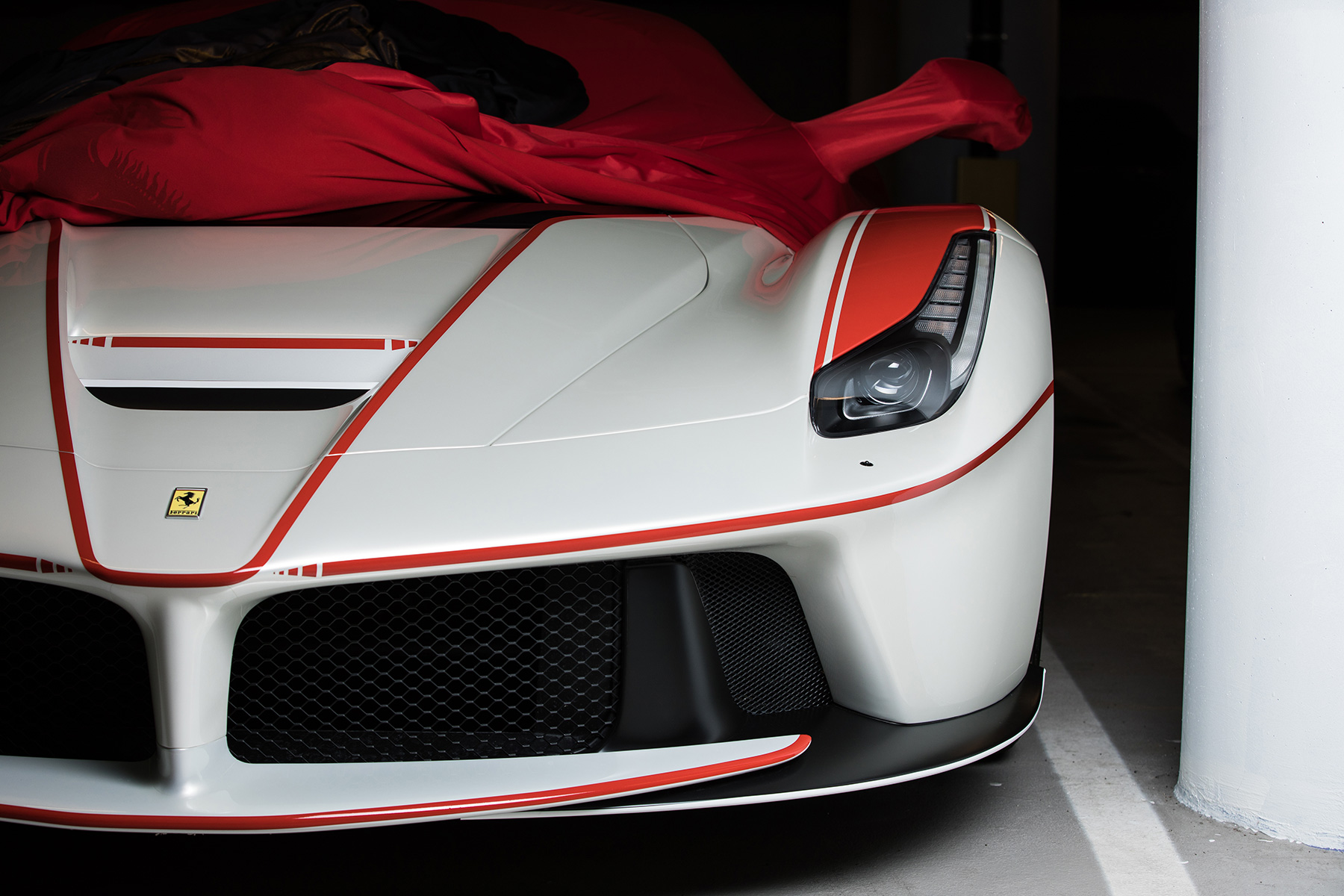 With a degree of OCD that can only be admired, the team have lined up all the cars by marque. We start with the Ferraris, which make up roughly a quarter of cars here. There are two oh-so-pretty Dinos – both sought-after ‘chairs and flares’ editions with Daytona-style seats, flared wheelarches and Campagnolo alloys – followed by a pair of Berlinetta Boxers: one grey, the other traditional Rosso Corsa red.

Next up are two F430s, one registered in the Middle East, followed by a 550 Maranello and a 612 Scaglietti. The 612 was always judged one of Pininfarina’s poorest efforts, yet it looks oddly handsome now. Perhaps there’s space for one in my dream garage after all.

The rest of the row gets progressively more modern: FFs, GTC4Lussos a 458 Speciale and several 488 GTBs. One of the 488s is a one-off with custom paint that we’re politely asked not to photograph. Likewise, several cars belonging to a “well-known Instagrammer” are off-limits. No matter, onto the best of British…

The mouthwatering mix of Aston Martins includes DB5s and DB6s, two original V8 Vantages and a rare and rather handsome DBS. Parked side-by-side, the contrast between the classics – upright, muscular GTs – and the modern Astons – low-slung sports cars – is immediately apparent, but both hold their own appeal.

There are Rolls-Royces and Bentleys here, too. Some of the coachbuilt Rollers are very valuable indeed and thus can’t be photographed, so we snap a new Wraith – along with a Bentley Mulsanne and Continental GT (the latter in shocking pink).

Other local heroes include two examples of the McLaren 720S, a British Racing Green Jaguar XK120 and a number of E-Types, their sleek silhouettes recognisable even before the covers are lifted. 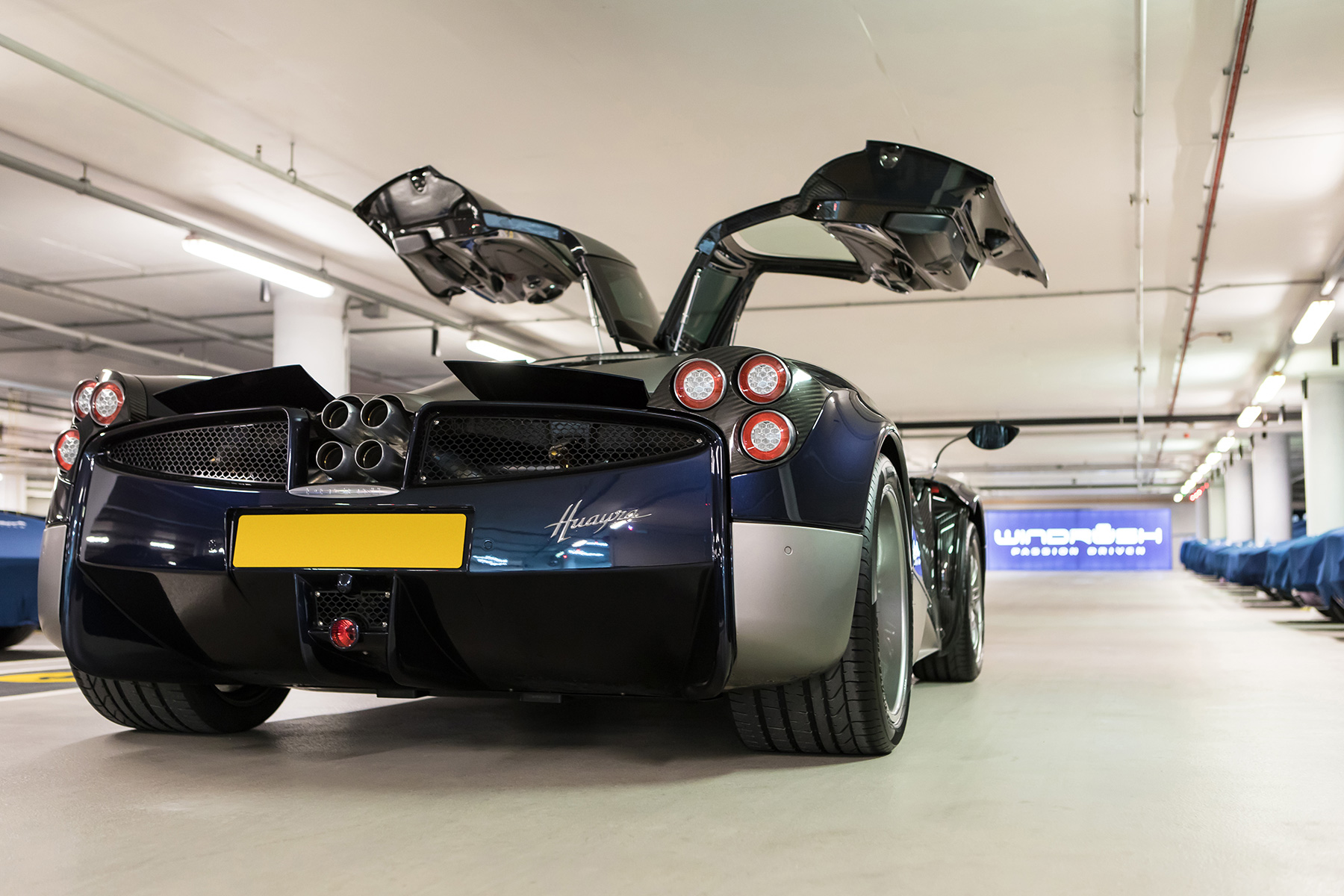 The number of 993-generation (1994-1998) 911s is interesting to note, and a sure sign of this still-relatively-modern Porsche’s burgeoning classic status. Rare Carrera RS and Turbo S versions are the highlights here.

However, we’ve saved the best until last. At the far end of the building is a special trio of hypercars belonging to one wealthy customer. There’s a LaFerrari on FXXK wheels, a special-edition Ferrari 599 GTO and a Pagani Huayra – one of seven in the UK.

Allan from Windrush fires up the LaFerrari for our video (see above) and 6.3 litres of Italian V12 reverberates through the underground echo-chamber. It sounds raw and red-blooded: a reminder that cars like these are alive with thrilling kinetic energy, not simply static investments. The stuff of dreams, in fact.