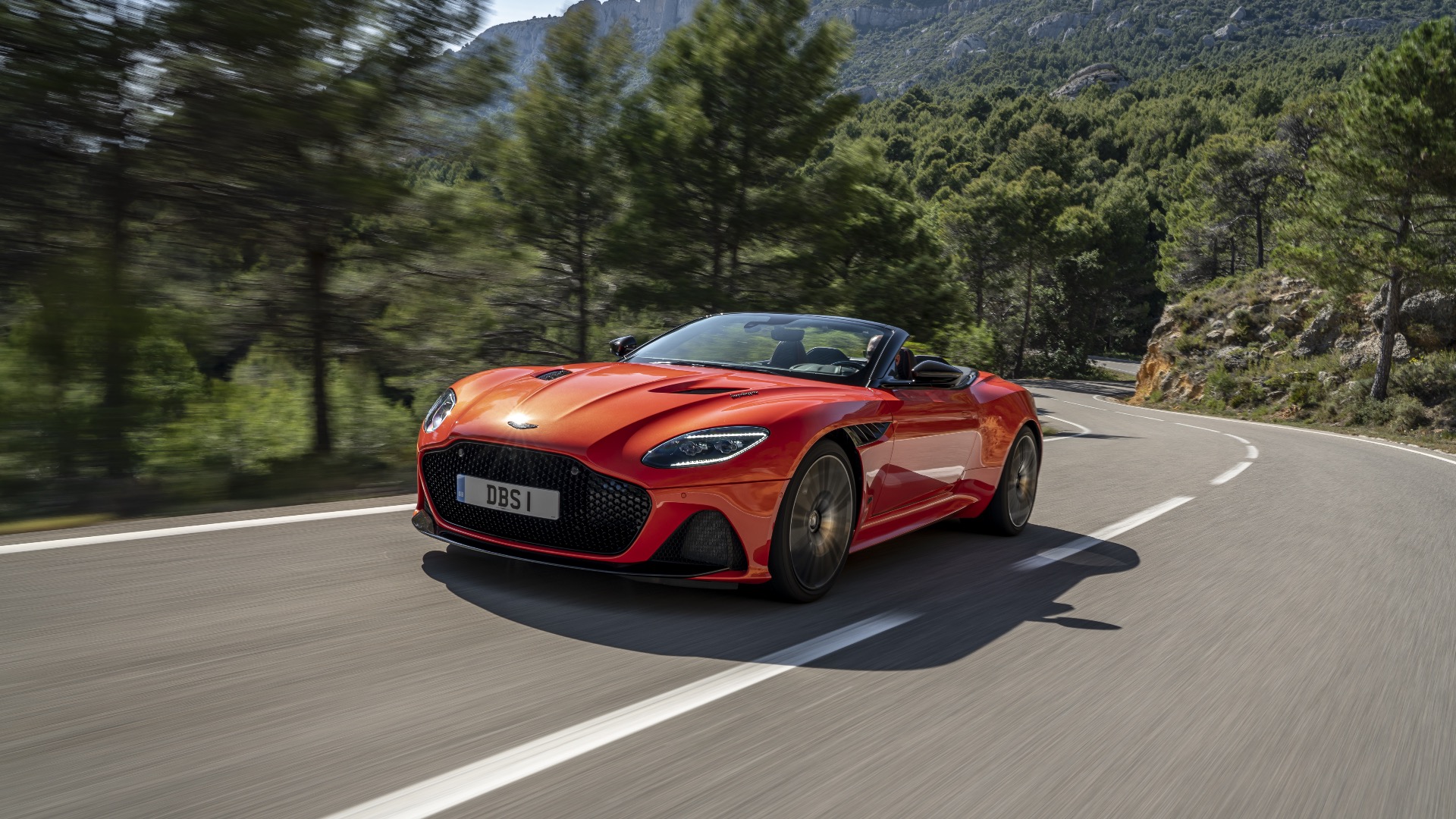 Back in March, Aston Martin stole the Geneva Motor Show with two radical concepts. The ‘Son of Valkyrie’ AM-RB 003 hypercar – since christened Valhalla – arrives in 2021 and will be Daniel Craig’s wheels in the next Bond movie. The Vanquish is due a year later, a direct rival for the Ferrari F8 Tributo and McLaren 720S.

Both cars break the mould by being mid-engined. And both also employ a downsized, hybridised V6: a first for the brand. The new DBS Superleggera Volante, with its fulsome front-mounted V12, already feels like the end of an era.

Still, the old-school Aston Martin is signing off in some style. 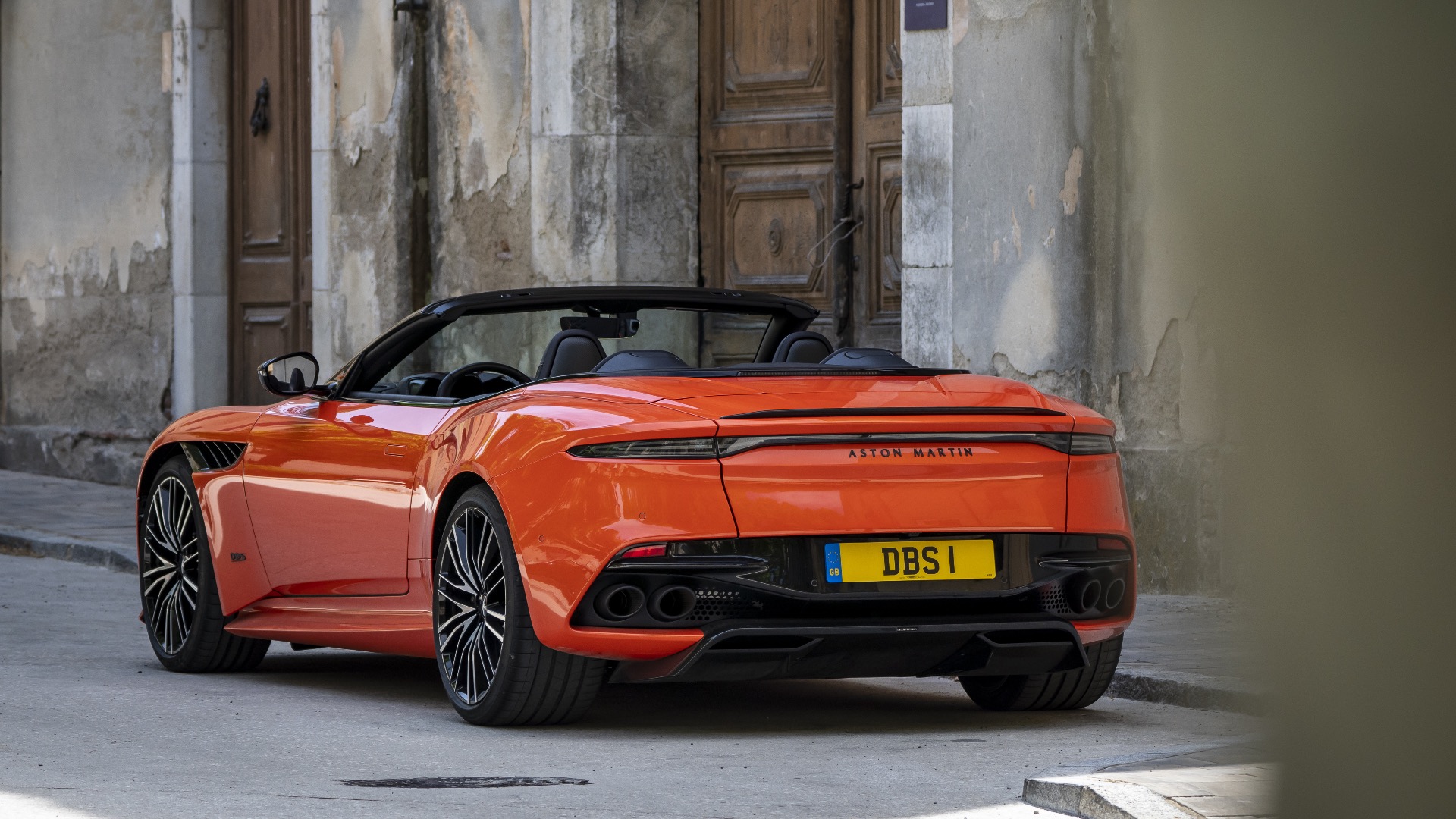 For those not versed in all things Aston, ‘Volante’ means convertible and the DBS Superleggera is the firm’s flagship GT. This drop-top version costs £247,500 and first deliveries are scheduled for autumn 2019.

Best looking car currently on sale? The DBS Volante is surely in with a shout…

This Cosmos Orange colour glints yellow in the sun. ‘Chopped carbon’ finish on the badges is interesting, too. pic.twitter.com/rS260qRhUH

The Volante uses the same roof as the DB11. Available in eight different colours, it takes 14 seconds to open and 16 seconds to close. Did I mention it looks knee-tremblingly gorgeous, too? 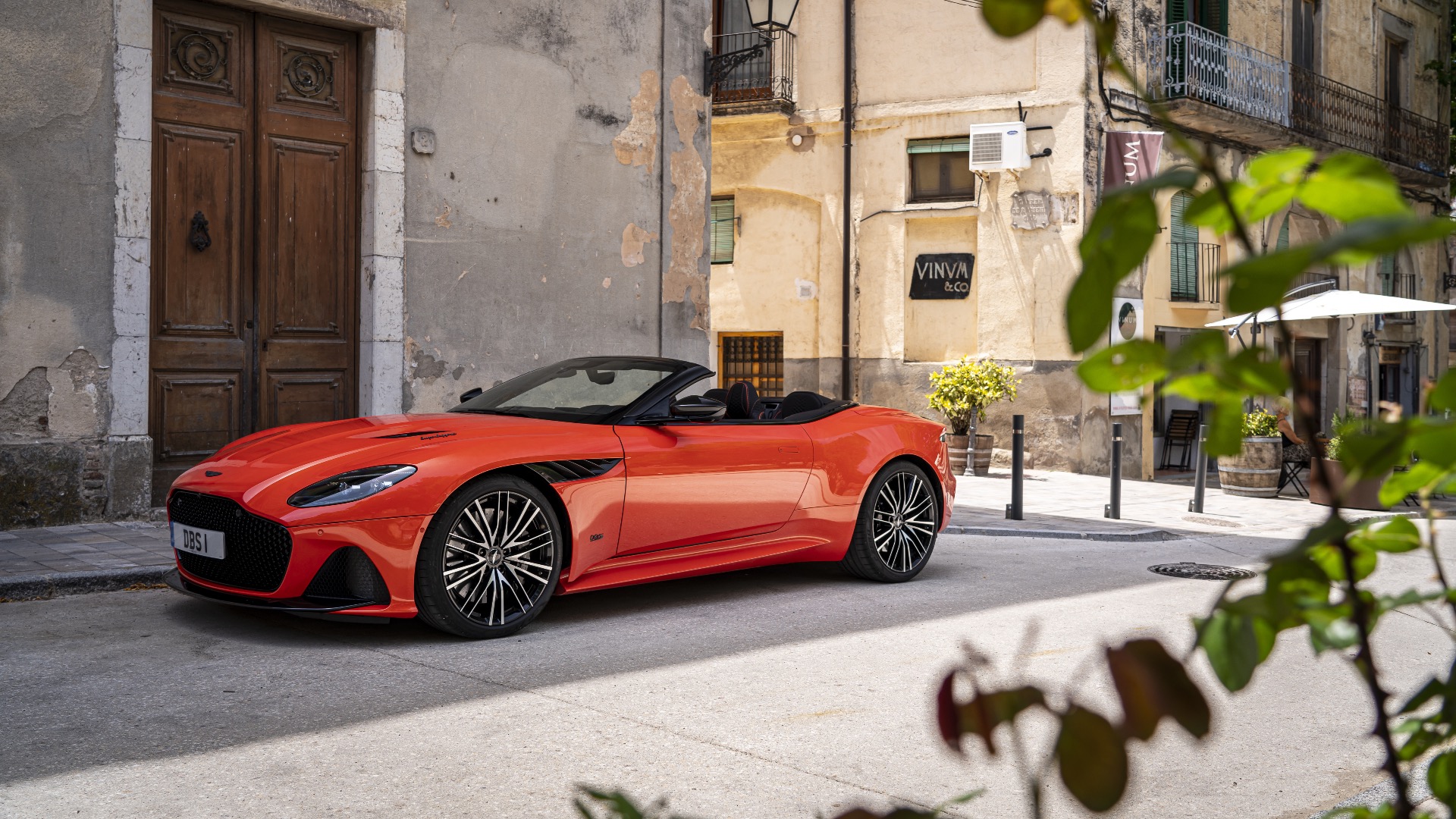 The DBS Superleggera was already the best looking car on sale, but the Volante kicks it off the catwalk. Sinewy and shrink-wrapped, it bulges in all the right places.

Unlike some supercars, the Aston doesn’t resort to aggressive aero appendages. It’s far too cultivated for that. Nonetheless, details such as the ‘curlicues’ behind the front wheels, double diffuser and ‘Aeroblade II’ rear spoiler deliver real downforce; a total of 177kg at Vmax is just 3kg less than the coupe.

Park the two cars side-by-side and the Volante’s haunches are appreciably broader and even more athletic. The extra space is needed for the roof, which disappears flat beneath the rear deck. 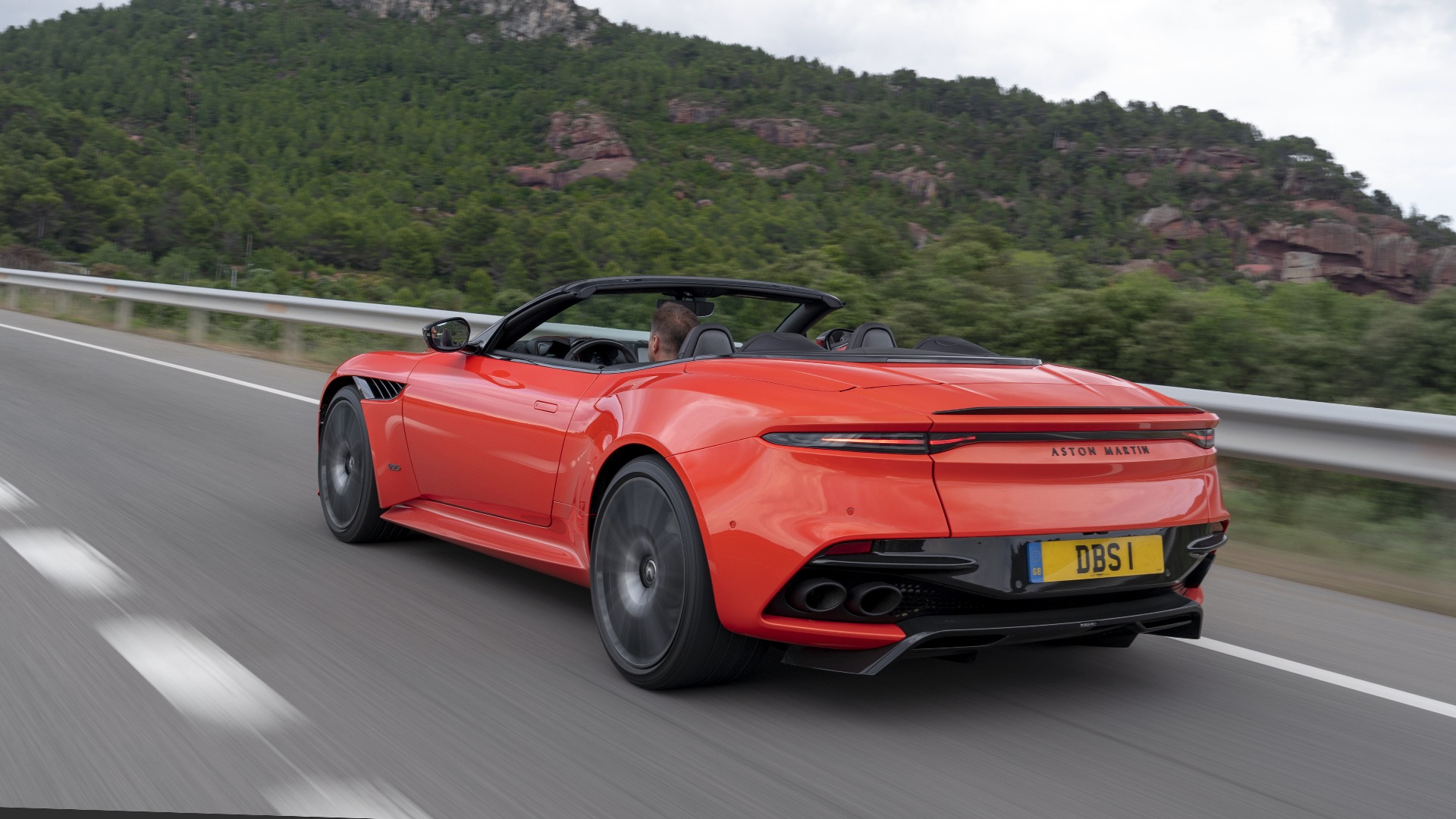 Much of the profit on cars like this stems from personalisation, and Aston Martin’s ‘Q’ division (note the knowing Bond reference) is happy to help. With options factored in, the price of my test car had snowballed to £301,760.

Sadly, Q’s efforts didn’t include rotating number plates or pop-out machine guns, but then pearlescent Cosmos Orange paint is hardly suitable for a spy. A special-order shade, it glints yellow in the Spanish sunshine, showing off the Volante’s flawless physique.

Other extras include a wind deflector, Bang and Olufsen audio system and (oddly Porsche Boxster-esque) smoked rear lamps. The mottled ‘chopped carbon’ badges divide opinion, but I love the retro ‘Superleggera’ script either side of the car’s nostrils, which replicates the logo of the famous Italian carrozzeria.

Manic in the middle 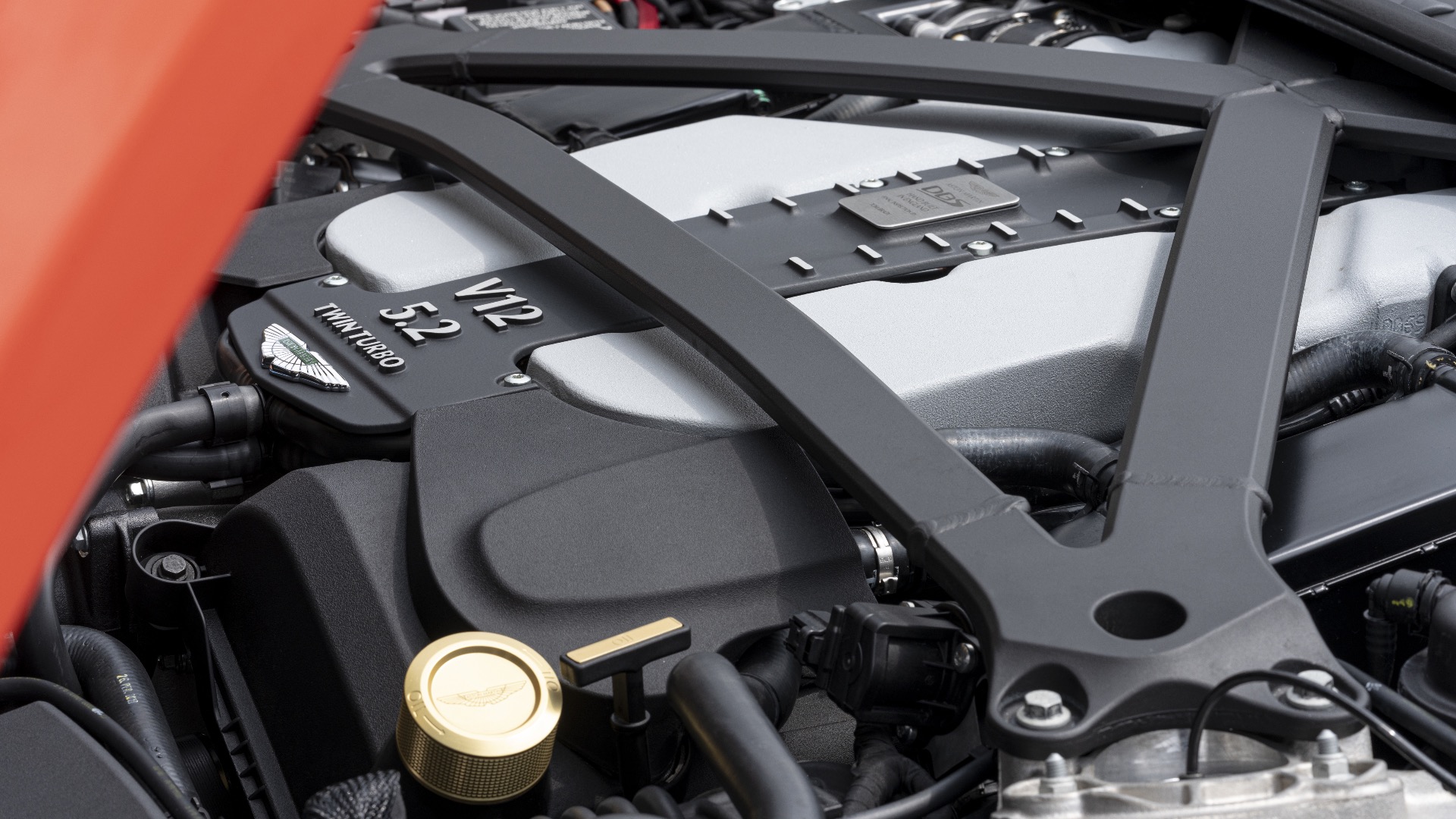 There’s nothing particularly ‘super light’ about the Volante, though. At 1,863kg without fluids, it’s 170kg heavier than the coupe, albeit with improved 50:50 weight distribution.

Flip-up the front-hinged bonnet and you see how that perfect balance is achieved. The DBS is almost mid-engined, its V12 wedged tight against the scuttle and clamped beneath chassis-stiffening cross braces. A bespoke Aston Martin engine rather than a rebadged AMG unit, it’s connected via a carbon-fibre propshaft to a ZF semi-auto gearbox at the back of the car.

Front suspension is by double wishbones, with a multi-link set-up at the rear. Skyhook adaptive dampers have three settings – GT, Sport and Sport+ – and the brakes are standard carbon-ceramic discs, framed by 21-inch forged alloys and Pirelli P Zero tyres. 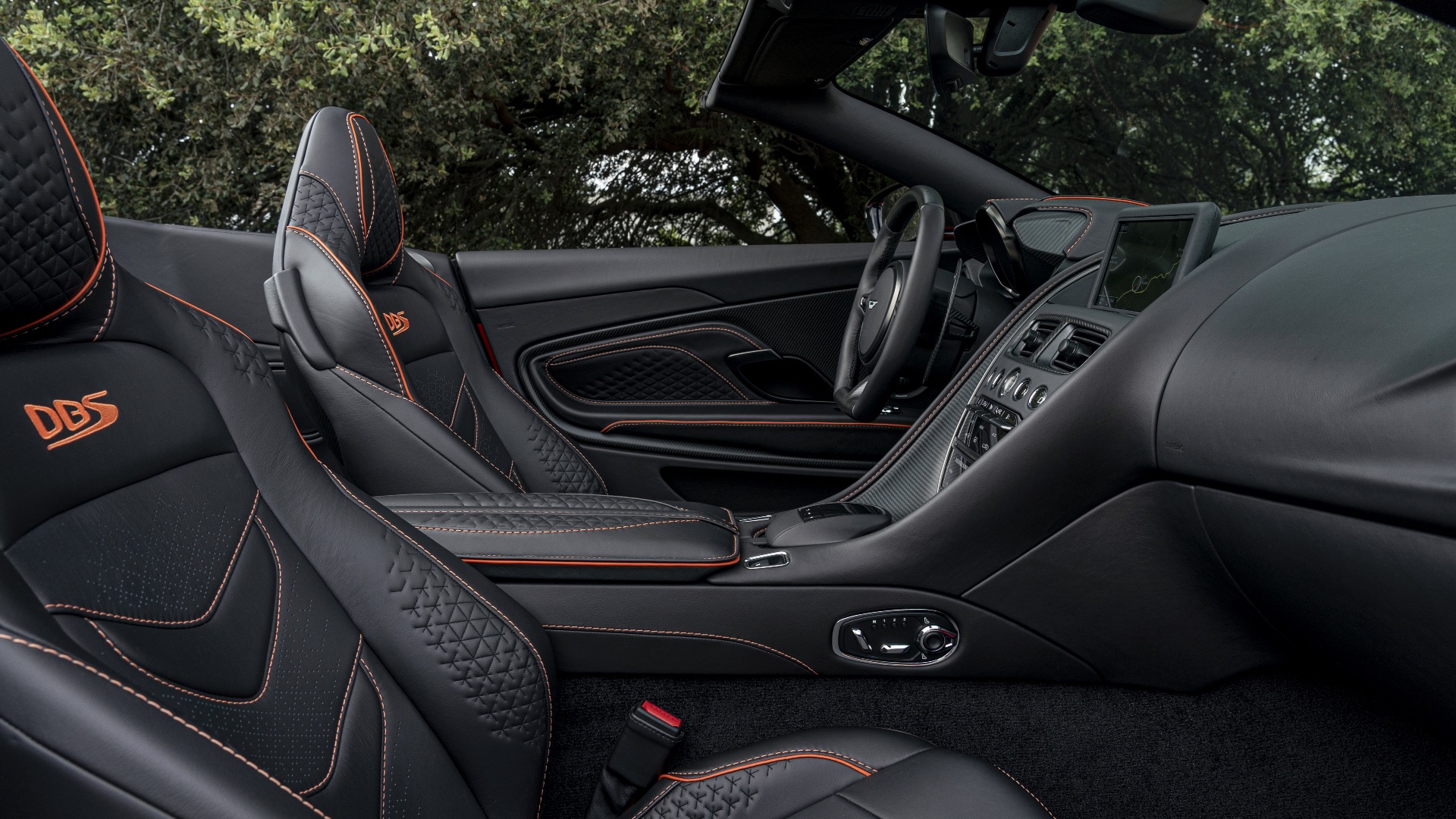 Inside is where the DBS clearly reveals its roots. There are longer shift paddles, shapelier seats, a hooded instrument binnacle and a squared-off steering wheel, but little else differs from the DB11: a car first launched in 2016.

The old-tech Mercedes-Benz media system is a case in point. With its blocky graphics, clunky interface and modest 8.0-inch screen, it seems unbecoming of a £250k car. You can’t connect via Apple Carplay or Android Auto either.

On the plus side, materials quality is impressive and the DBS has four seats. The rear pews are brutally cramped, of course, but they’re useful to supplement the small, shallow boot.

Can we just torque? 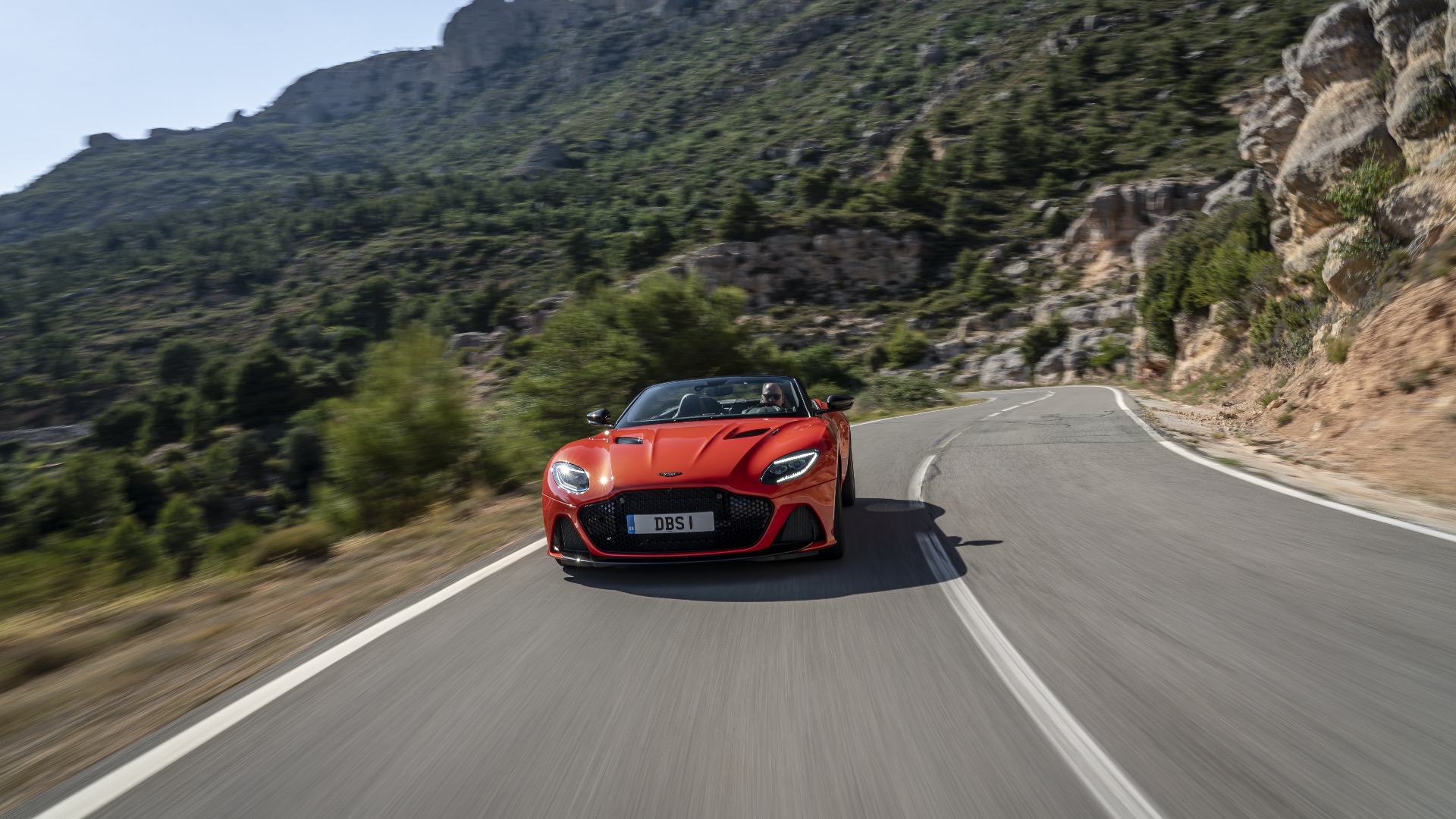 Never mind those 725 horses, this engine is all about pulling power. A mighty 663lb ft (900Nm) of torque at 1,800rpm is enough to tow the Titanic. There’s no discernable turbo lag, just a swelling surge of decadent, addictive thrust, It feels like a force of nature.

Leave the eight-speed ’box in automatic and the Volante will cruise effortlessly. The first 20 percent of throttle travel is ample to keep pace with lesser traffic, and you can drive almost everywhere in fourth gear. Herein lies the difference between a highly-strung supercar and – to use chief designer Marek Reichman’s term – a “super GT”.

Pull the pin, though, and it erupts like Krakatoa, then proceeds to rip a hole in the horizon. Acceleration feels relentless, the engine goading you to wring out more revs with maniacal glee. The way it flips from demure to deranged leaves me awestruck every time. 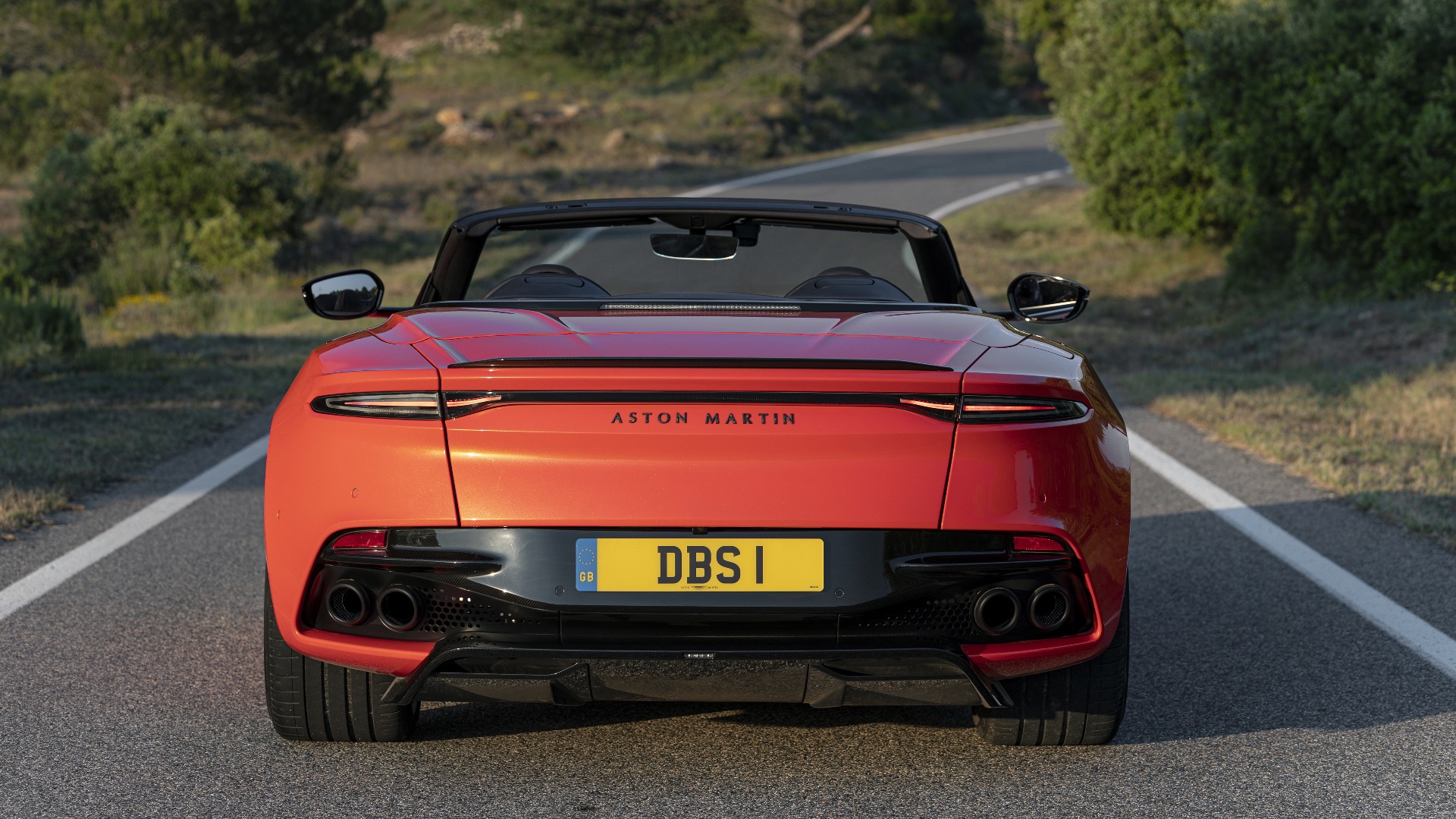 Beyond even pulse-spiking speed, noise is what defines the Volante experience. Retracting the roof allows, to quote Aston Martin, “a true orchestra of sound to pour into the cabin”. In five hours of driving, I didn’t reach for the stereo once.

At full throttle, the blood-and-thunder roar of the V12 ambushes your eardrums, but there are other players in this ensemble: the snarl of induction, the whoosh and snort of the turbos, the crackles and pops from the quad tailpipes. The result is multi-layered and richly mechanical – all played out in unfiltered surround-sound.

This Volante is 100kg heavier than the coupe, although weight distribution is actually better. pic.twitter.com/yx42ySrYkv

With its eight-layer fabric roof in place, the Volante is immediately more muted. There’s sufficient headroom for six-footers and you’ll appreciate the refinement on longer journeys. But the sense of occasion inevitably suffers a little.

A question of Sport+ 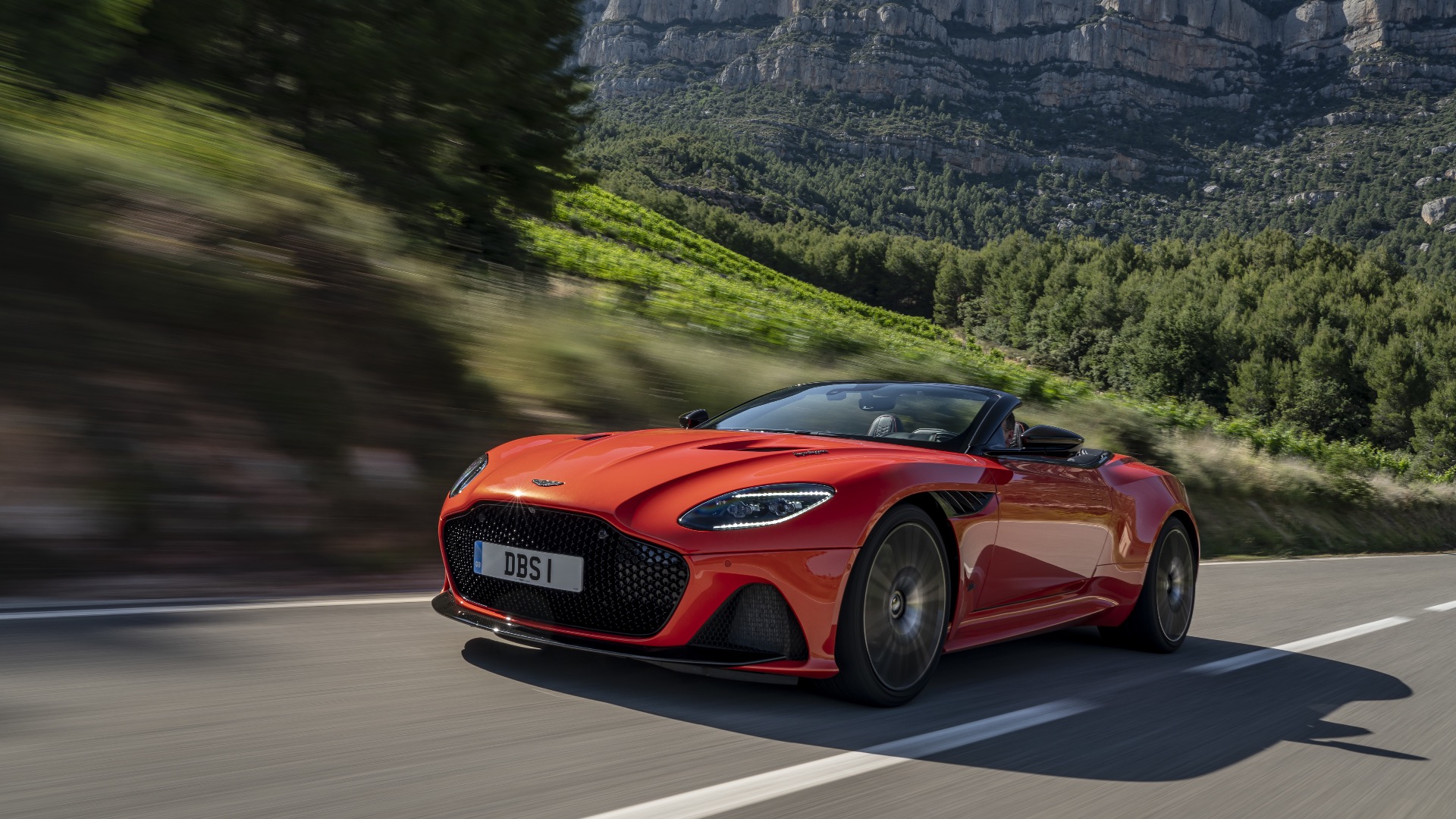 If you think that muscle car soundtrack means tyre-smokin’ bad behaviour, you reckon without the magic of Matt Becker. The renowned chassis guru spent most of his career at Lotus and has transformed the way Aston Martins drive.

Again, there are three modes for drivetrain response, configured separately to the damping via switches on the steering wheel. The ride in Sport+ is too restless for regular roads, but in the mountains beyond Barcelona it gives the DBS unwavering focus.

With everything set to ‘maximum attack’ the Aston turns in like a race car with scores to settle. Its steering is lucid, body control is iron-fisted and the front end bites into bends like a grizzly bear. However, there’s also a fluidity here that inspires confidence. Only a far better driver than me would switch off the stability control on public roads, but the Volante feels progressive and dependable under duress. This thug has been to finishing school.

In a class of its own 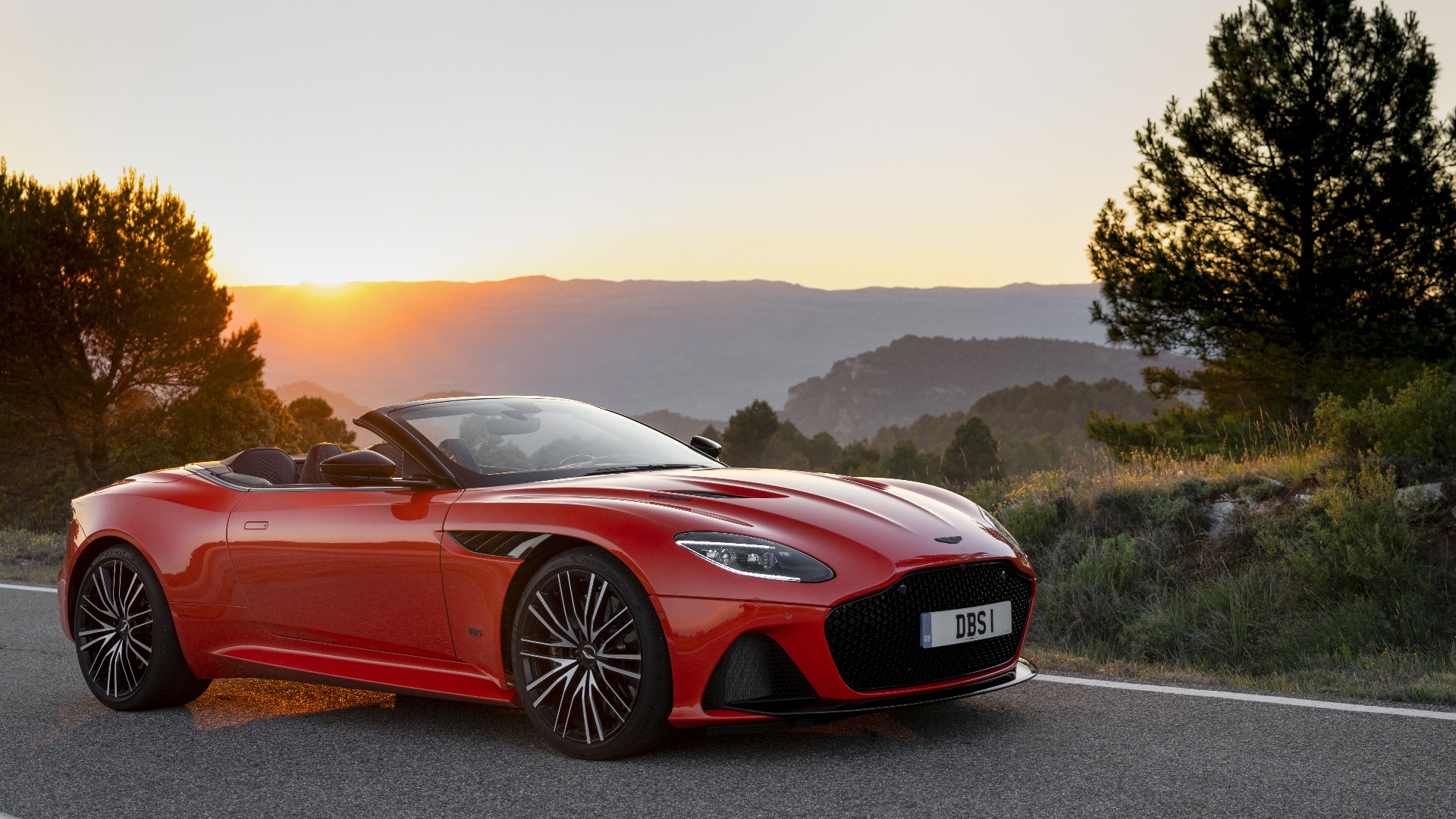 At the launch of the DBS coupe last year, Marek Reichman declared the Ferrari 812 Superfast its only real rival. In reality, while the two cars are quite similar on paper, they feel utterly different on the road. The Ferrari is a peaky prancing horse, the Aston a punchy British bulldog.

Maranello doesn’t make a drop-top version of the 812, which leaves the Volante somewhat in a class of its own. At the sportier end of the spectrum, the £237,000 McLaren 720S Spider is even quicker, and equally exciting to drive. And if comfort takes priority, the £176,000 Bentley Continental GTC W12 is less rambunctious and somewhat softer. Pity the poor millionaire making that decision…

One point of note: Aston Martin CEO Andy Palmer has already said that the V12 engine “does fit” into the smaller Vantage. So if you’re after the ultimate V12 sports car, it could be worth waiting – and praying – they make it. 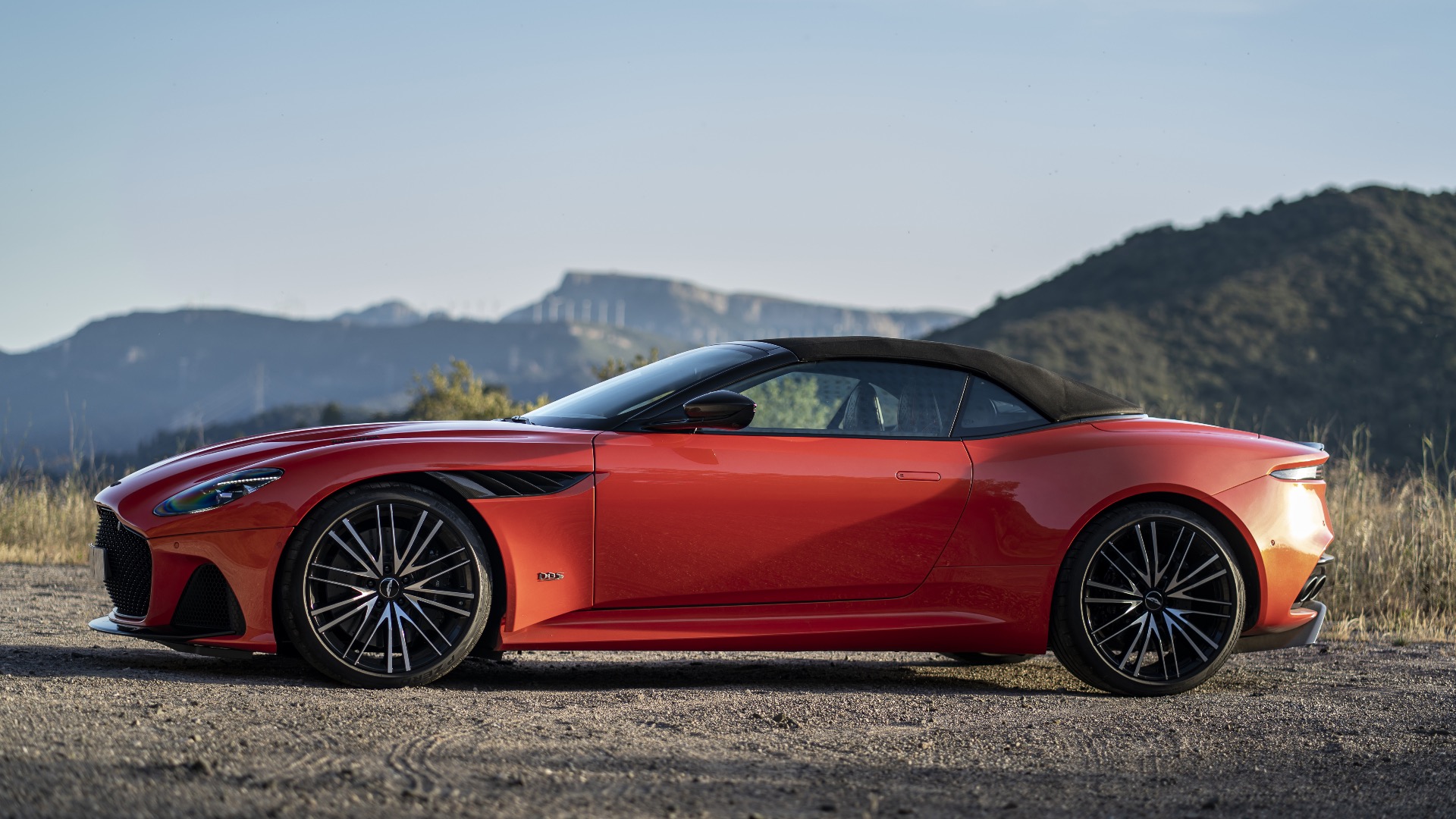 I’m not usually a fan of convertibles; I like my car to be a cocoon, sealed off from the outside world. I’d make an exception for the DBS, though. It’s so evocative, so richly visceral, that you want to savour every sensation and drink in every decibel. The opportunity for a 211mph blow-dry is tempting, too.

Coupe or Volante, I think this is the best car Aston Martin currently makes. A luxurious grand tourer one minute and a steroid-pumped supercar the next, it ably bridges the gap between the marque’s past and future.

As car enthusiasts, we’re all excited about Aston’s ambitious next steps. Even so, when big V12-powered brutes like the DBS Superleggera finally die out, the world will surely seem a poorer place.