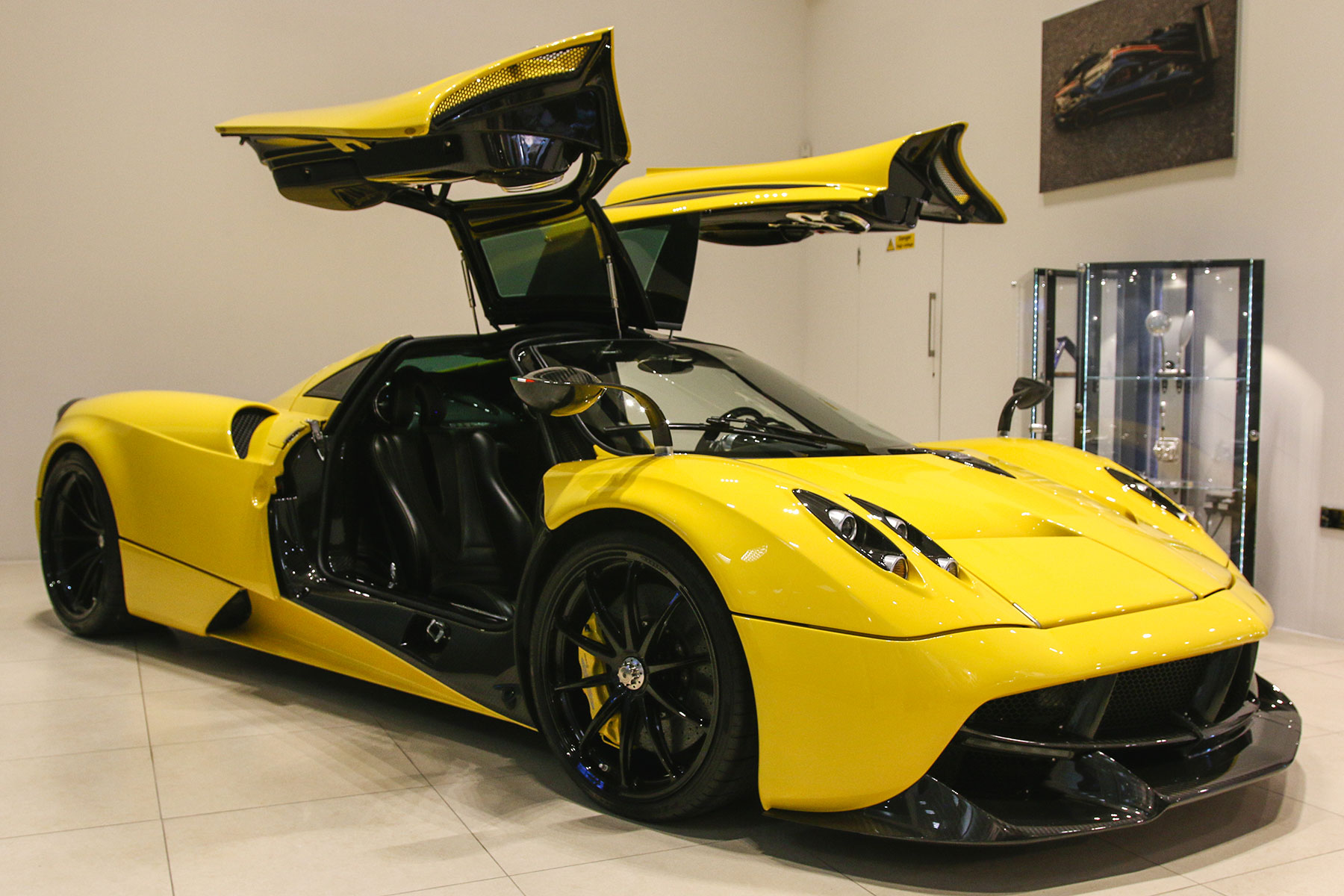 Forget Park Lane or the King’s Road, this small street near Wembley boasts many more supercars per square foot. The service department of H.R. Owen Ferrari is here, along with Topaz, a high-end detailing company. Within minutes, I’ve spied a new Porsche 911 GT3 RS, Aston Martin Vanquish and numerous Ferraris – including an 812 Superfast and Testarossa.

The cars I’m here to see, though, make even such rarified metal look mainstream. I ring a buzzer and enter a nondescript warehouse. This is the UK home of Pagani: purveyor of money-no-object hypercars since 1999.

In the showroom and workshop are no less than eight Zondas – a sizeable chunk of the 136 cars ever made. And waiting in the car park is the world’s only right-hand-drive Pagani Huayra Roadster, valued at £3 million. Today promises to be quite special.

First, though, a bit of background. Company founder Horacio Pagani honed his craft at Lamborghini, becoming an expert in lightweight composites before their use was widespread. His high watermark was the 1987 Countach Evoluzione concept, which clothed a steel spaceframe in kevlar and carbon fibre.

Pagani set up shop in 1992, and seven years later the Zonda C12 was revealed. Powered by a 6.0-litre Mercedes-Benz V12, its key stats were 389hp, 0-62mph in 4.2 seconds and 185mph. It looked sensational, too, with a jet fighter-style canopy cockpit and beautifully bespoke interior.

The Zonda remained in production for 18 years, growing steadily more powerful (up to 760hp) and spawning endless special editions. Its Huayra replacement arrived in 2012 – overlapping with the Zonda – and the Roadster followed in 2017.

A work of automotive art 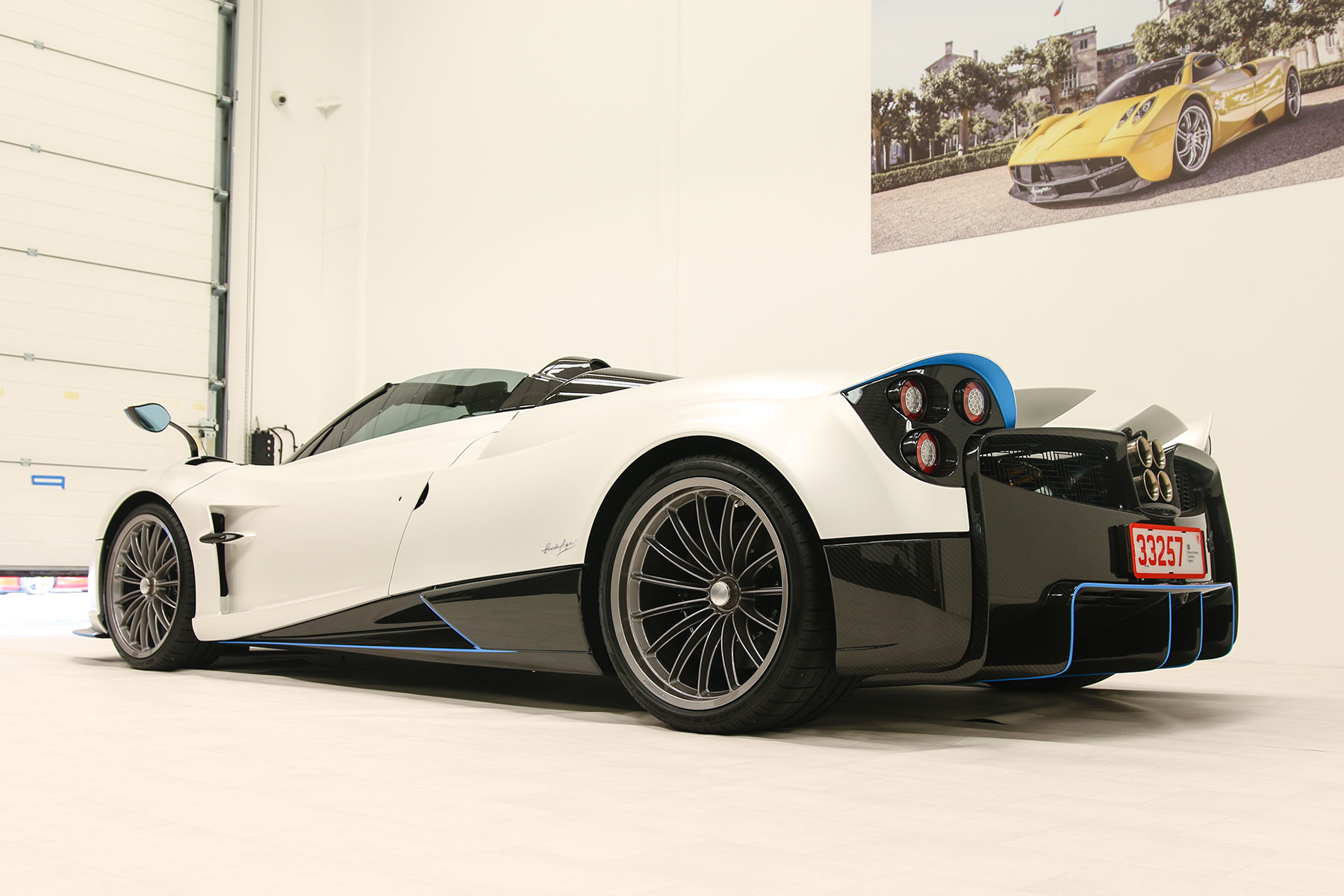 I’m introduced to head of sales, Francis Falconer, who’ll be taking me for a spin in the Huayra Roadster. With its front and rear clamshells open, this one-of-100 hypercar resembles a Transformer: futuristic and fantastic.

Impressively, the Roadster is both stiffer and 80kg lighter than a Huayra coupe. A new ‘Carbo-Triax’ composite that’s “more advanced than materials used for Formula One cars” takes much of the credit. Every screw on the car is made of titanium and etched with the Pagani logo – at a cost of £65 each.

Huayra Roadster vs. the North Circular 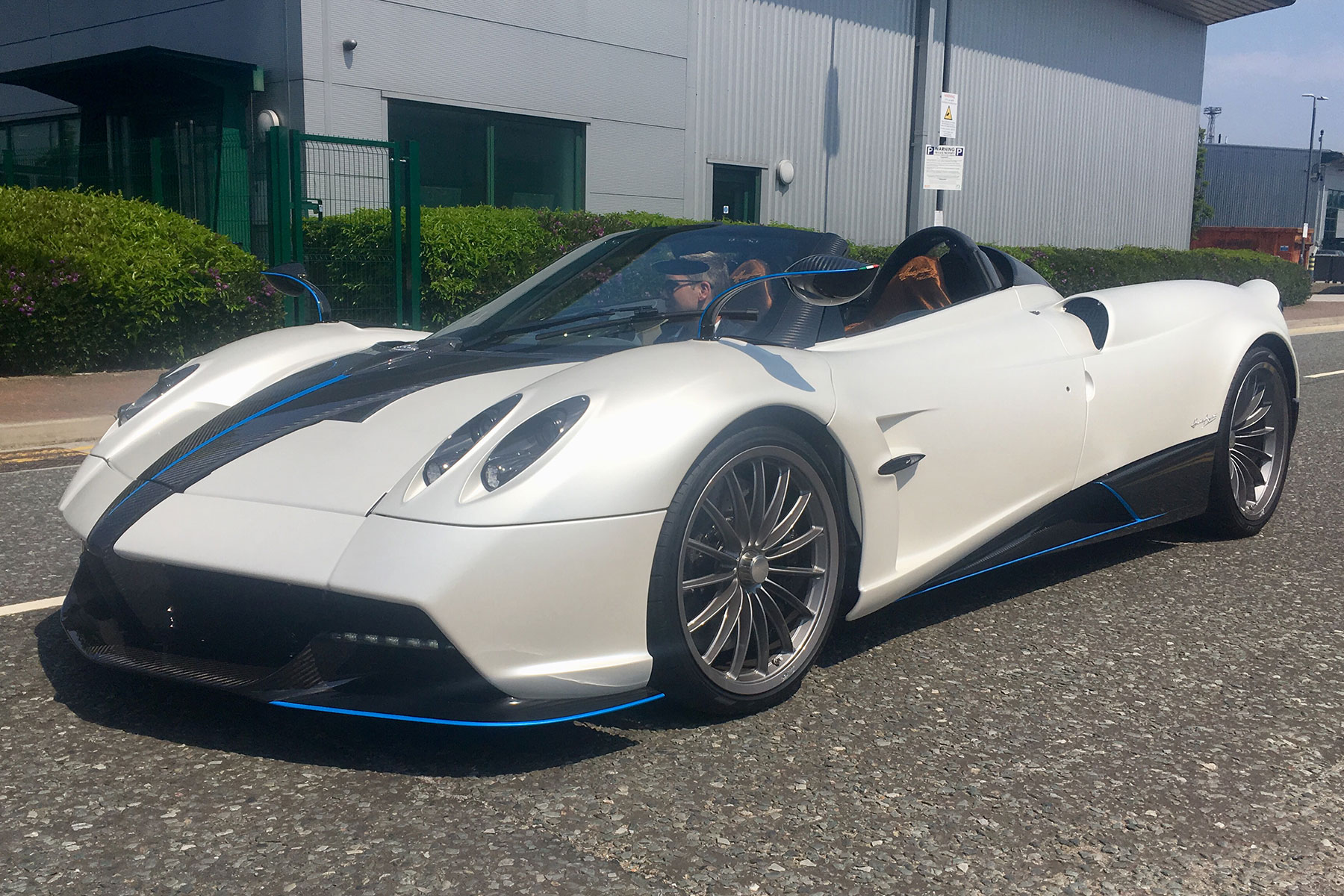 The small matter of 764hp means the Roadster will blast to 62mph in around three seconds, topping out beyond 200mph. Neither of which we’ll be verifying in west London traffic, sadly.

I slide into the low-slung seat and Francis prods the starter button. The V12 erupts with a bellicose bark, then settles to a strident idle, exhaling through Pagani’s trademark quad tailpipes. Over the speed humps of the industrial estate, it feels surprisingly compliant. “The Zonda was like a go-kart with a massive engine,” explains Francis. “This is more of a long-distance GT car.”

It still shifts, though. Francis only gets one opportunity to floor it – on the dual-carriageway North Circular – but acceleration feels utterly savage: a frenzied explosion of raw kinetic energy. Getting the best from a Pagani demands serious driving talent, but Francis says the biggest day-to-day challenge is parking: “The car attracts social media attention wherever you go. Clip a kerb and you’ll end up on YouTube.”

The EVOlution of Zonda 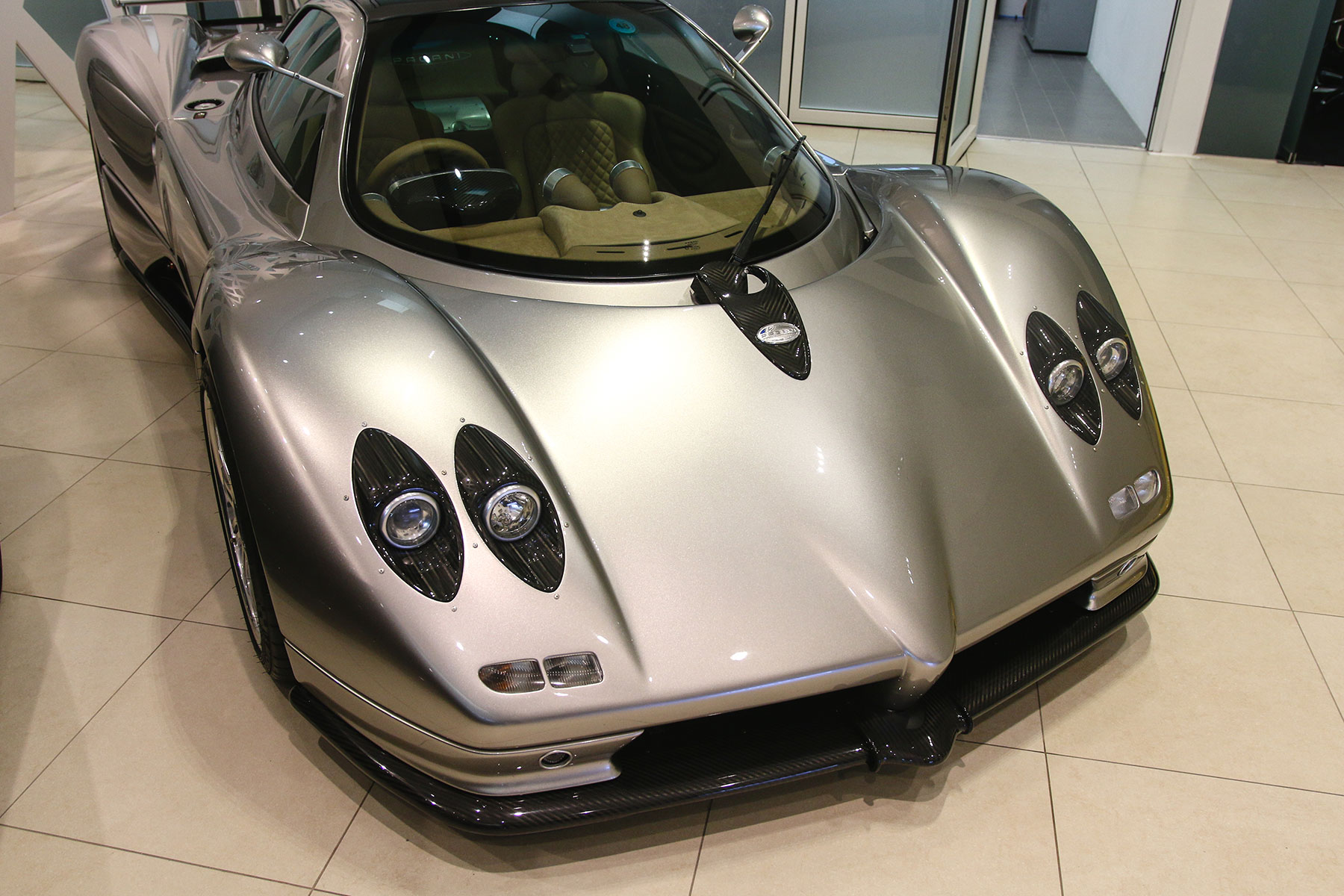 Heart racing, hair restyled by Huayra, I return to Pagani HQ. Even from the passenger seat, a full-paid-up hypercar is an intense and energising experience. Time for a cold drink and a nose around the showroom.

One particular car grabs my attention: a silver Zonda C12 S. Readers of Evo will recognise one of the magazine’s former long-termers, previously owned by editor Harry Metcalfe. Parked between a dazzling yellow Huayra and a naked carbon Zonda F Roadster, it looks surprisingly subtle – yet still effortlessly exotic.

Metcalfe’s car was the second 7.3 S built and has since been fitted with uprated ‘F’ brakes. But as I discover, very few Zondas have remained standard. 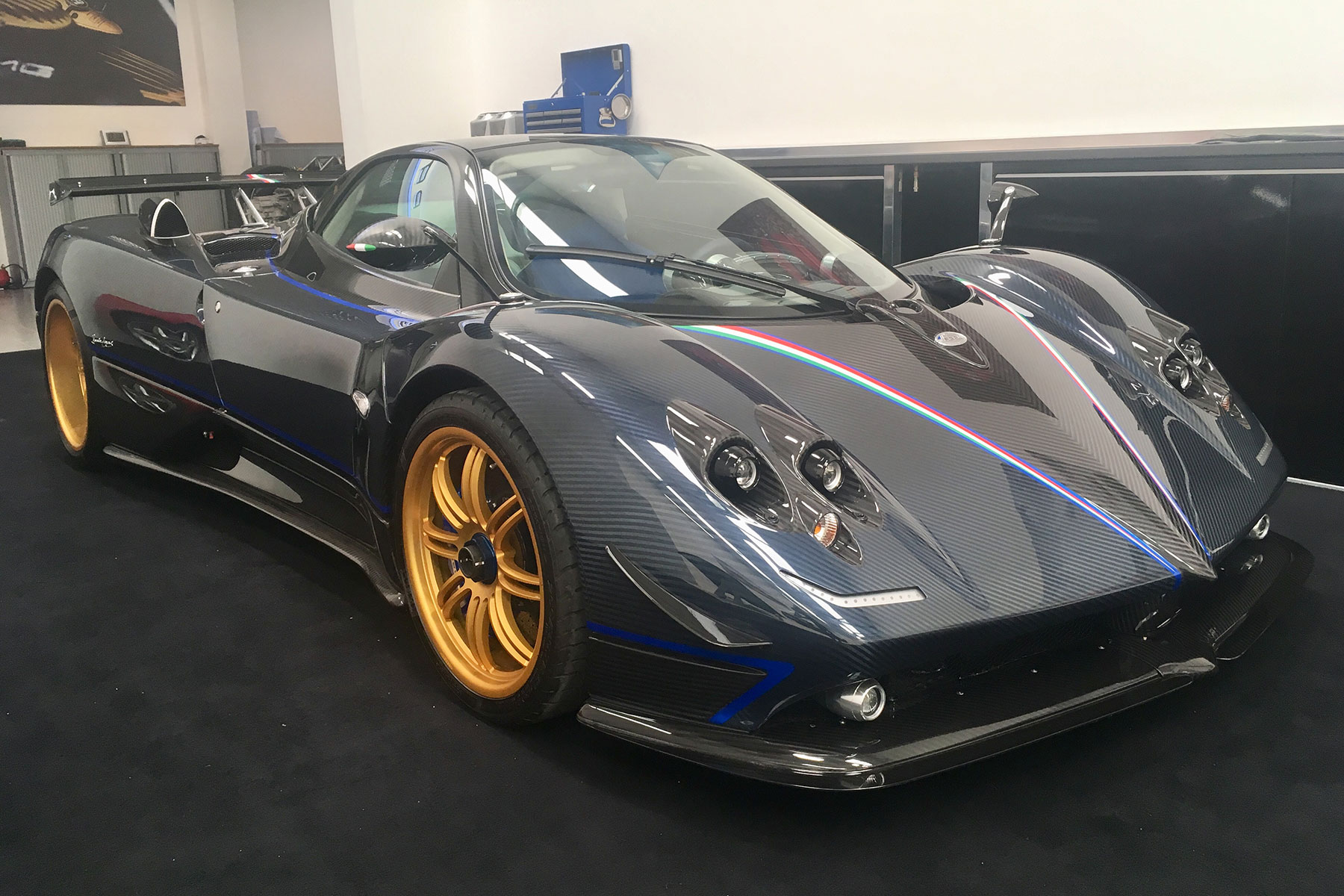 “Many Zondas have been modified with help from Pagani, often from Horacio himself”, explains dealer principal Christine Clarkin. “Everything Horacio does can be upgraded.”

There’s also been a bewildering array of Zonda special editions, many of them one-offs. The Tricolore above, for example, is one of three built to celebrate an Italian air display team. Its carbon fibre bodywork has a blue lacquer coating and there are vertical air scoops that mimic jet engines, plus a one-piece rear wing.

Five Zondas were originally built to final 760hp spec, including the purple ‘Viola’ parked outside, but “between 10 and 15” cars have since been converted. 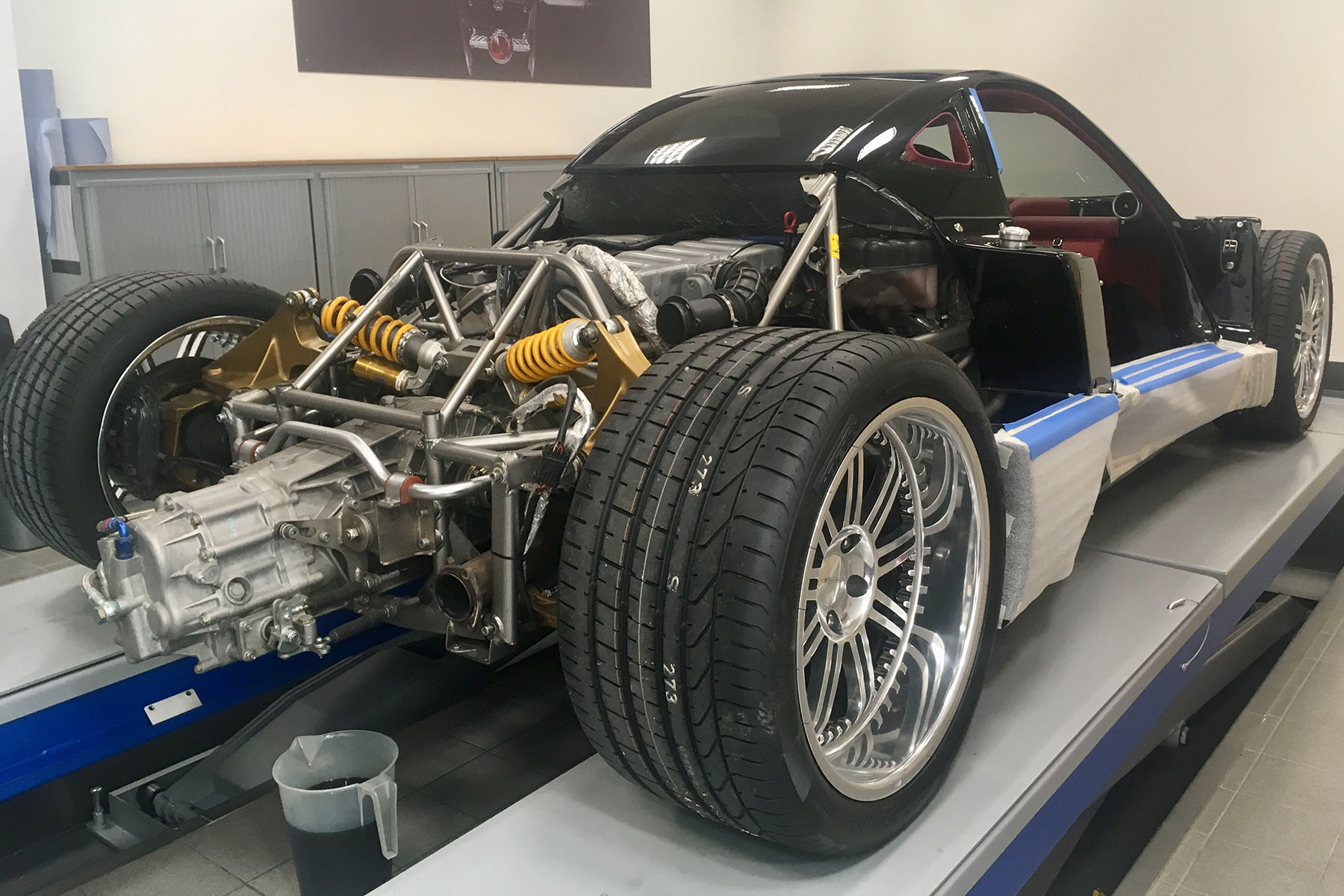 This is perhaps the greatest distinction between Pagani and its rivals. While most owners of supercars and classics are obsessed with originality, Pagani makes a virtue of continuous improvement. And, crucially, modifying your car in the ‘right’ way (i.e. via the factory) doesn’t seem to affect its value.

The ultimate expression of an owner’s individuality is, of course, a custom one-off. As Andy Smith, director of aftersales, reveals: “All special editions have direct input from Horacio and involve a huge amount of work. Everything is done from scratch, including bespoke tooling and bodywork moulds. The process takes between 18 months and two years – and there’s a long waiting list.”

Such dreams are beyond mere mortals such as I. Yet the unattainable otherworldliness of Paganis doesn’t diminish their appeal. The single-minded vision of this small company is genuinely inspiring. To quote Horacio himself, each car is “an unbridled work of art”.