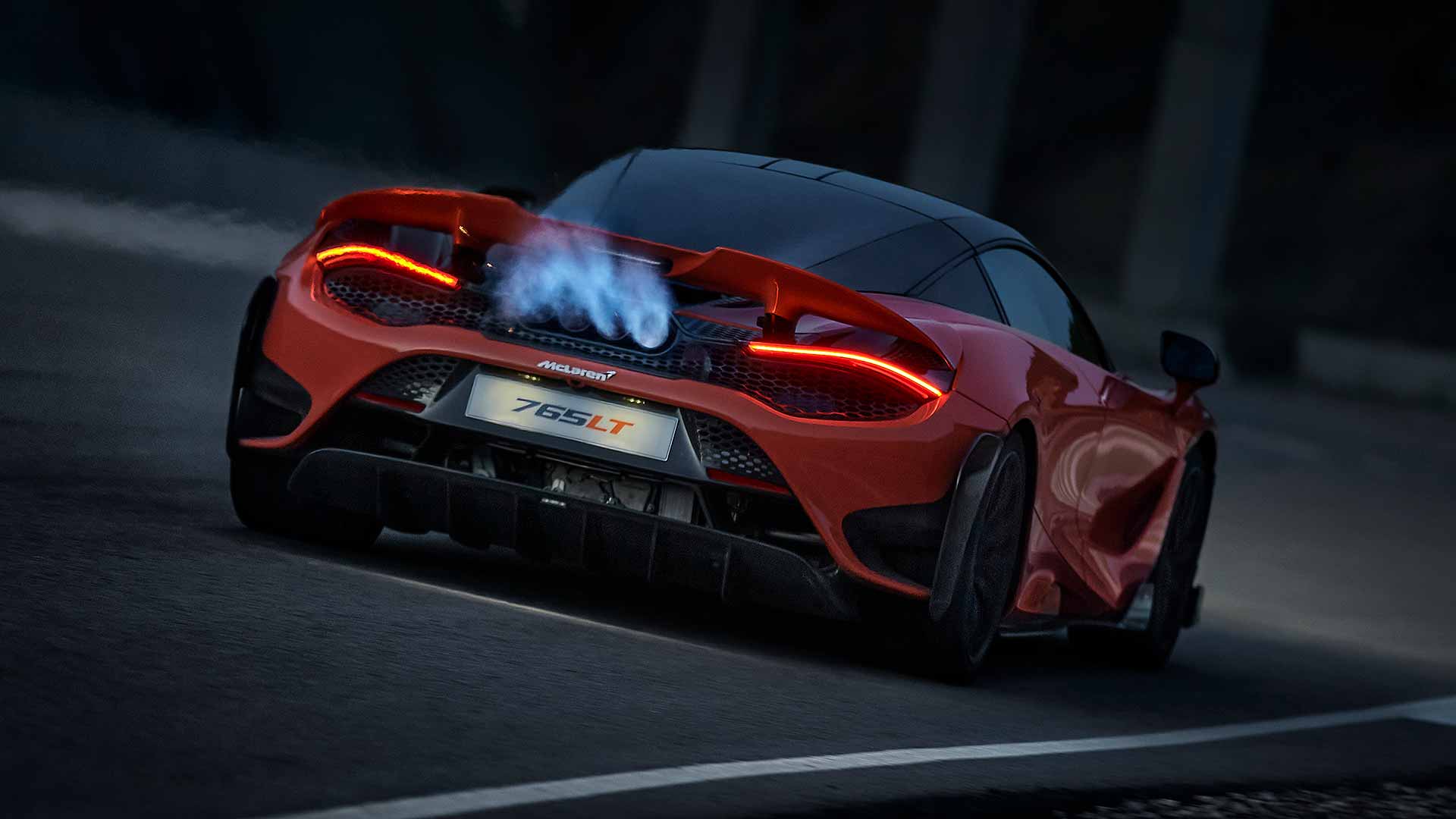 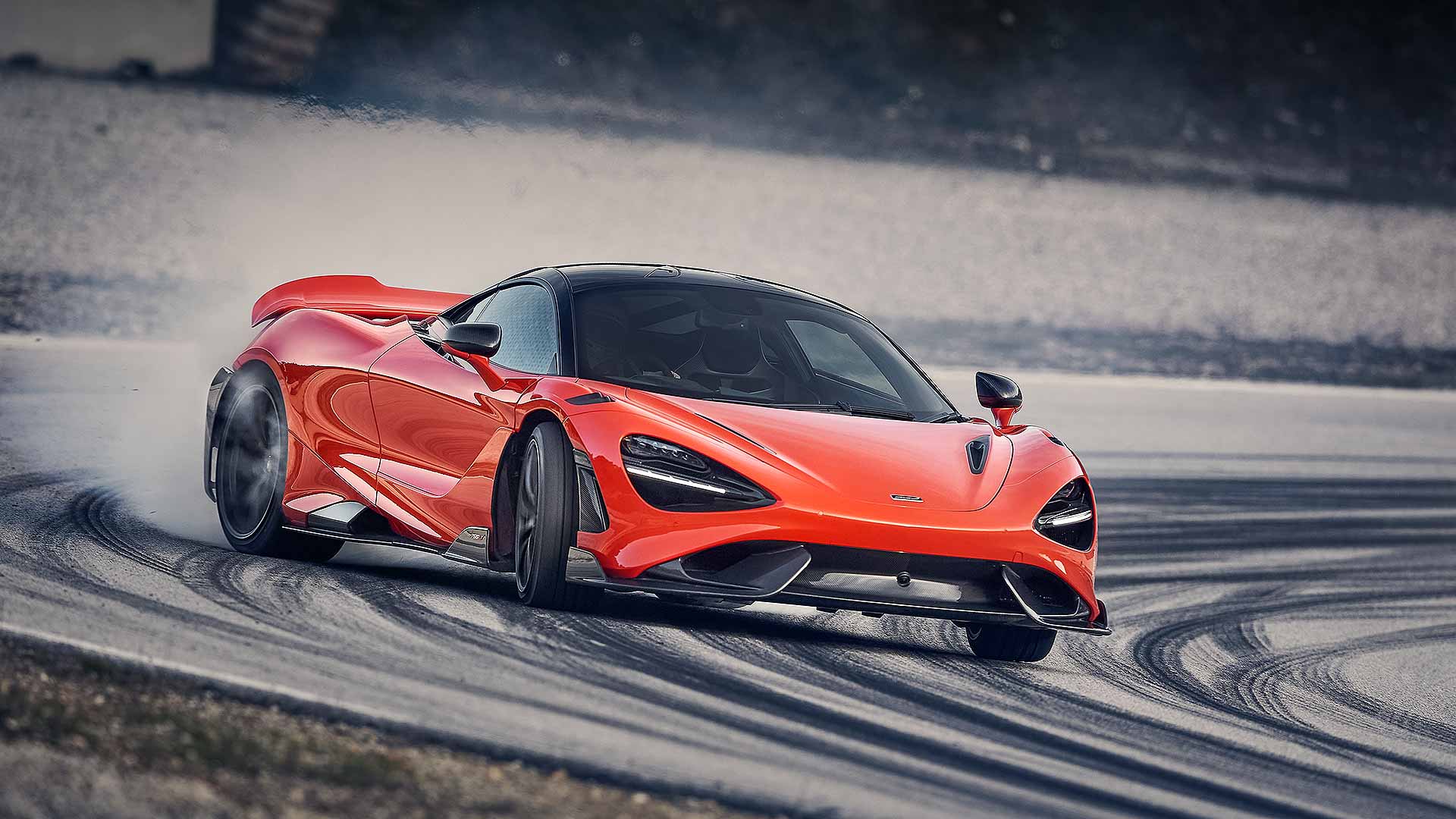 The press release for the McLaren 765LT contains around 6,000 words. This makes it a heavyweight among the press packs for cars that were to be unveiled at the 2020 Geneva Motor Show.

Six-thousand words is too many. Given the obsessive way in which McLaren has focused on the weight of the 765LT, it should have been written in text speak and bullet form. Srsly, Cln Chpmn @ Lts hs gt nthng on da McLaren 765LT. 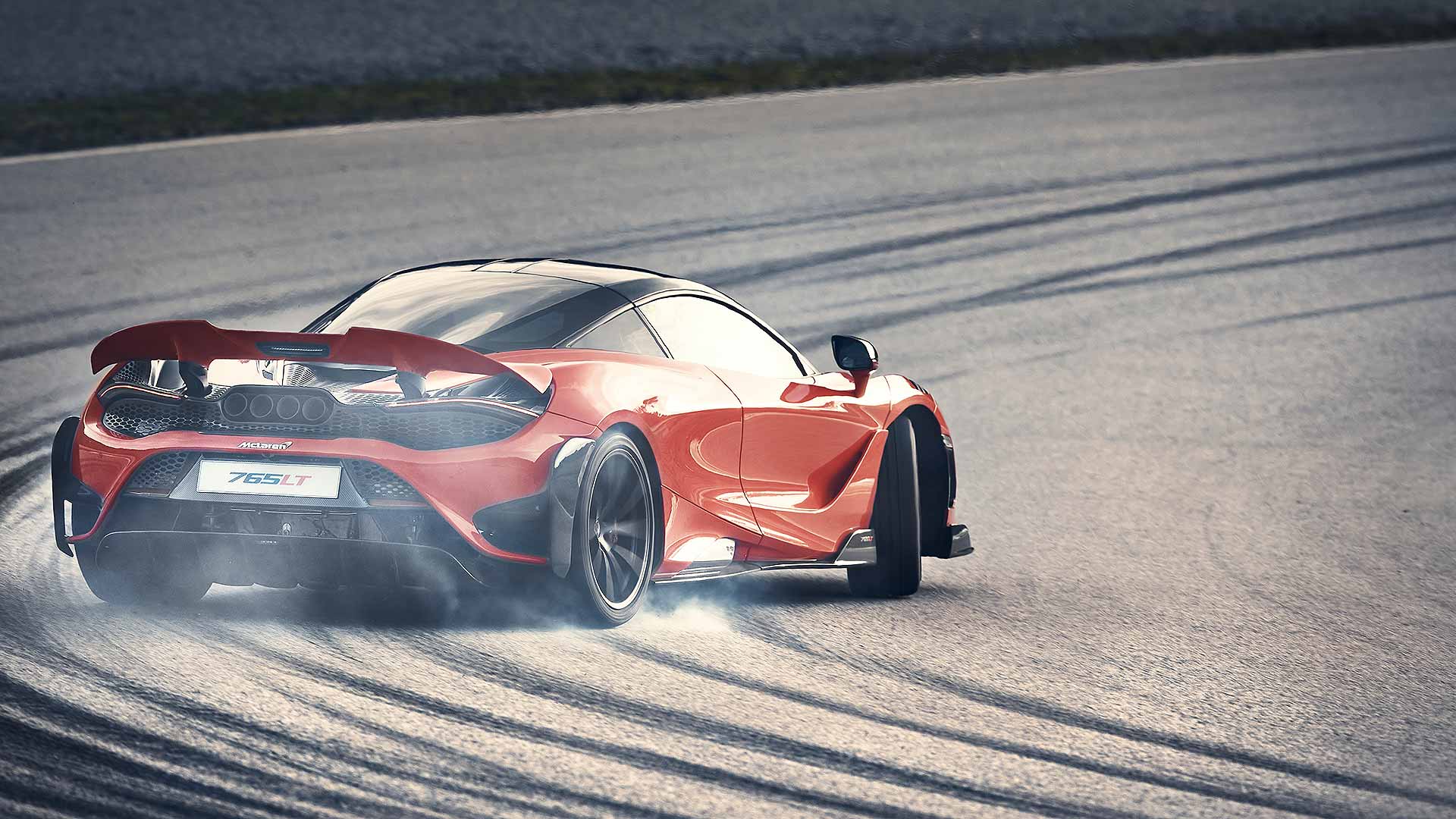 Adopting every weight-saving measure available when specifying a 765LT results in a dry weight of 1,229kg.

It almost seems wrong to add a driver. If you want to be one of the 765 customers, may we suggest going on a diet before taking delivery? Either that or drive naked. Every kilogram counts.

The 765LT is 80kg lighter than the 720S coupe, but you’d probably expect this from a ’Longtail’ McLaren. What’s more impressive is how this weight saving has been achieved. 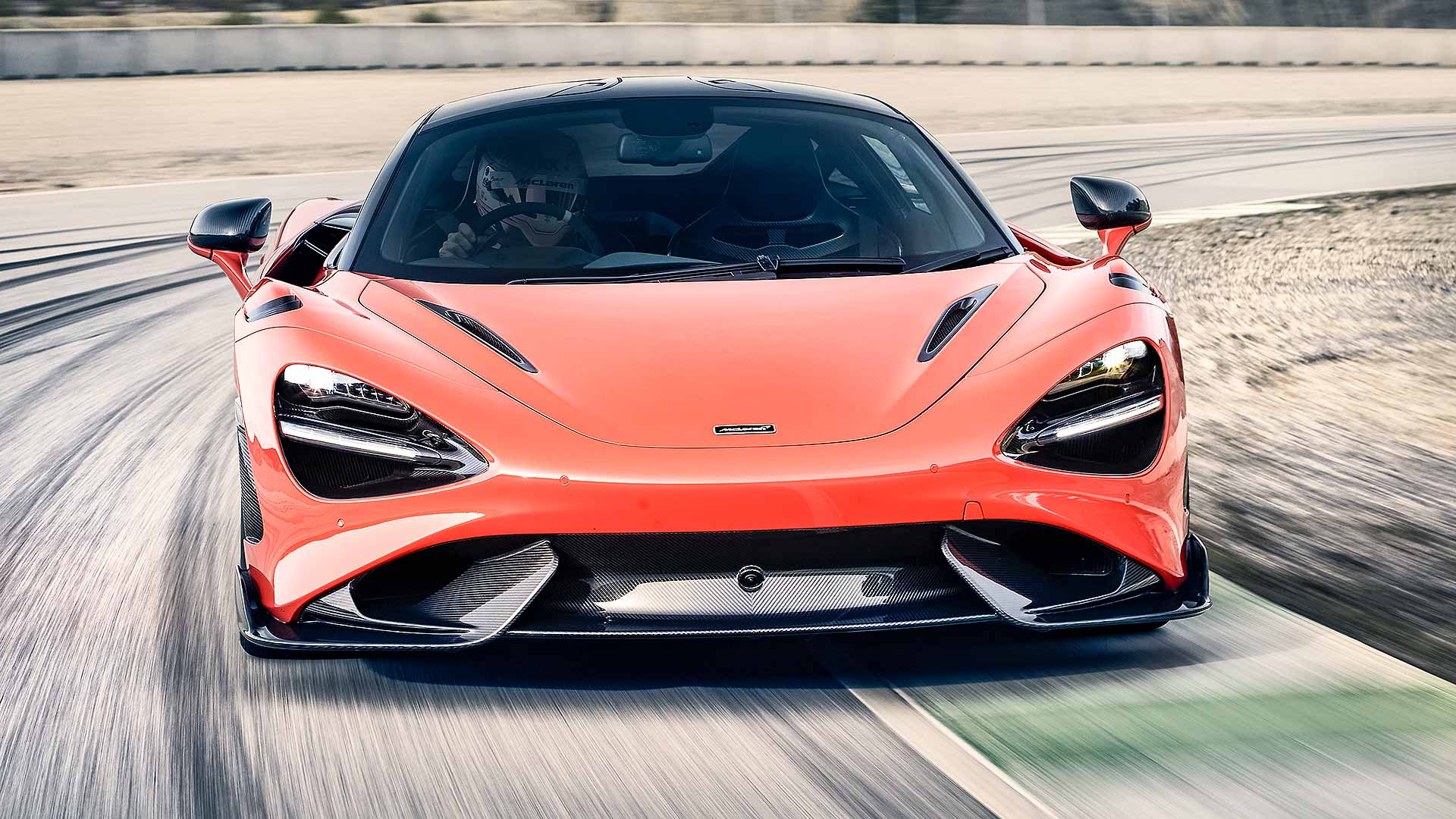 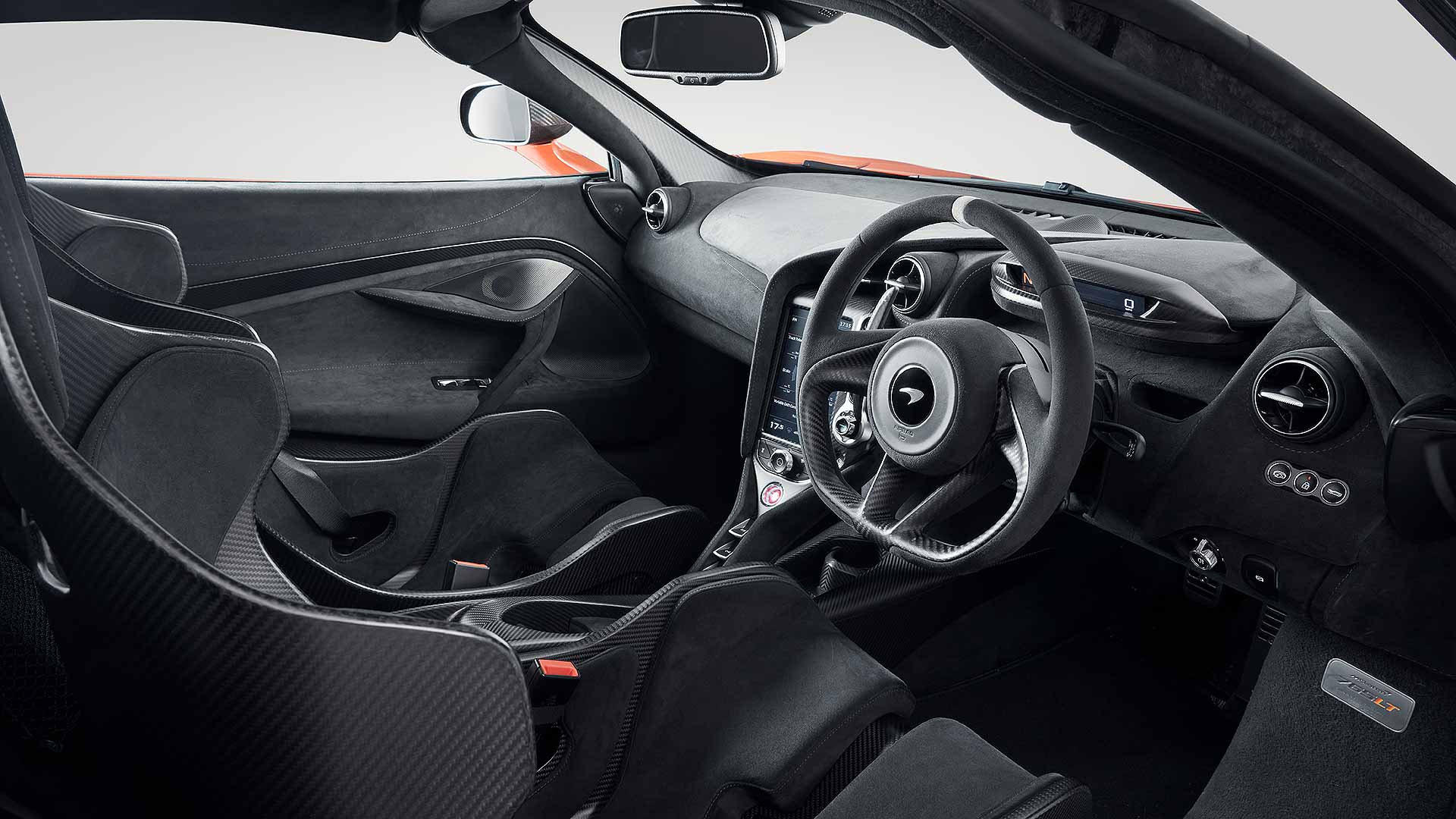 Air conditioning and an audio system can be specified, but doing so will result in the sound of a collective sigh coming from the Woking direction.

Some elements of the McLaren 765LT are carbon fibre as standard. These include the front splitter, front bumper, front floor, side skirts, rear bumper, rear wing and lengthened rear diffusers. Others are lightweight aluminium as standard, but can be optioned as carbon fibre if required. Examples include the bonnet, front wings, doors and rear wings.

On the inside, McLaren has used Alcantara trim, while there is no carpet on horizontal floor areas. To achieve maximum lightness, you’ll need the optional carbon fibre racing seats designed for the McLaren Senna.

The most powerful road-legal Longtail to date 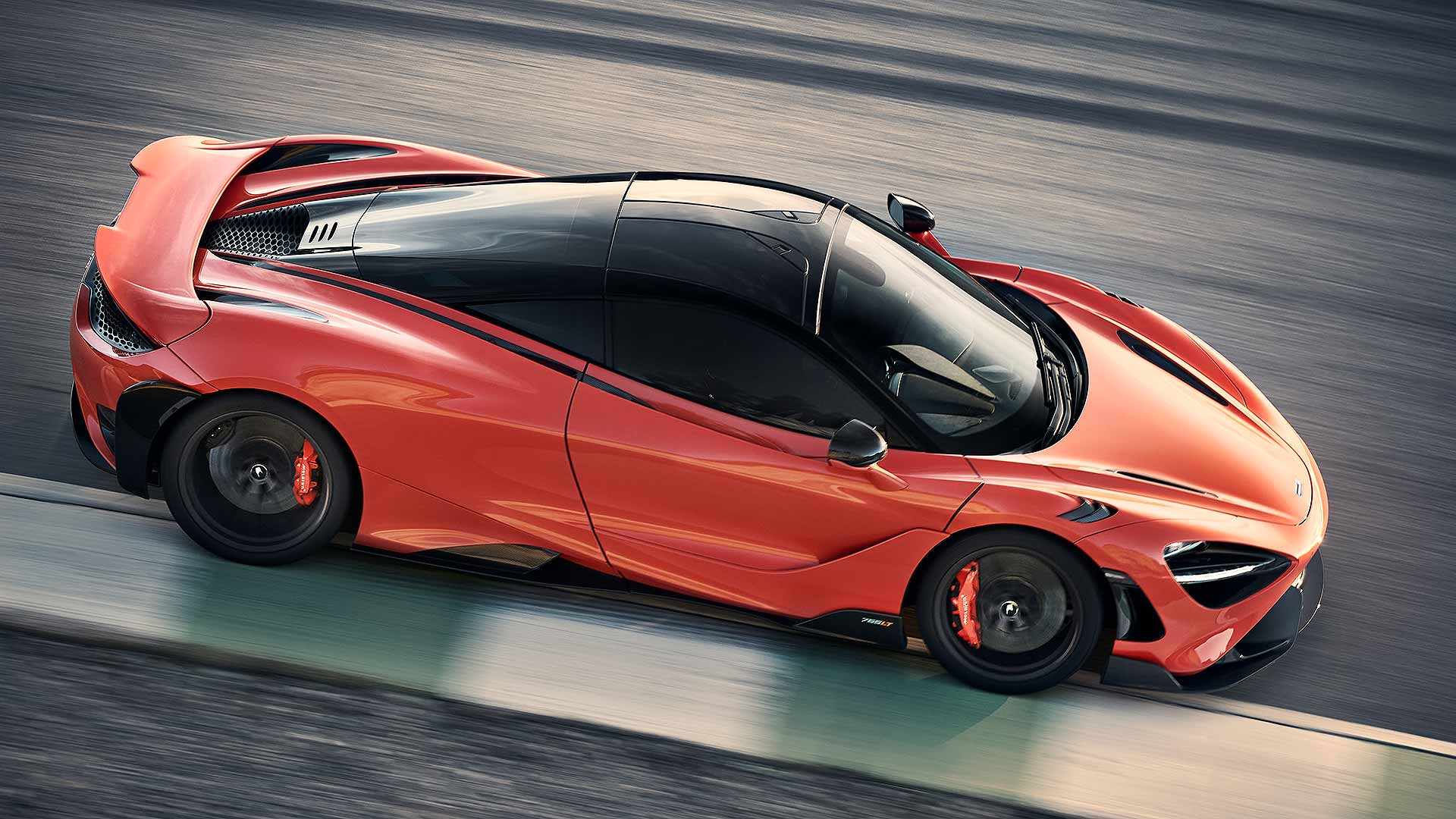 The subheading says it all. The McLaren 765LT is powered by a 4.0-litre twin-turbocharged V8 producing – predictably – 765hp at 7,500pm and 590lb ft of torque at 5,500rpm. McLaren says the shift times from the seven-speed transmission are 15 percent quicker than the 720S.

The full-titanium, quad-exit exhaust delivers the ‘precise harmonic content required to create a high-pitched, engaging note that becomes sharper and sharper as it builds to an incredible crescendo’. There are no tailpipe finishers – because lightness. 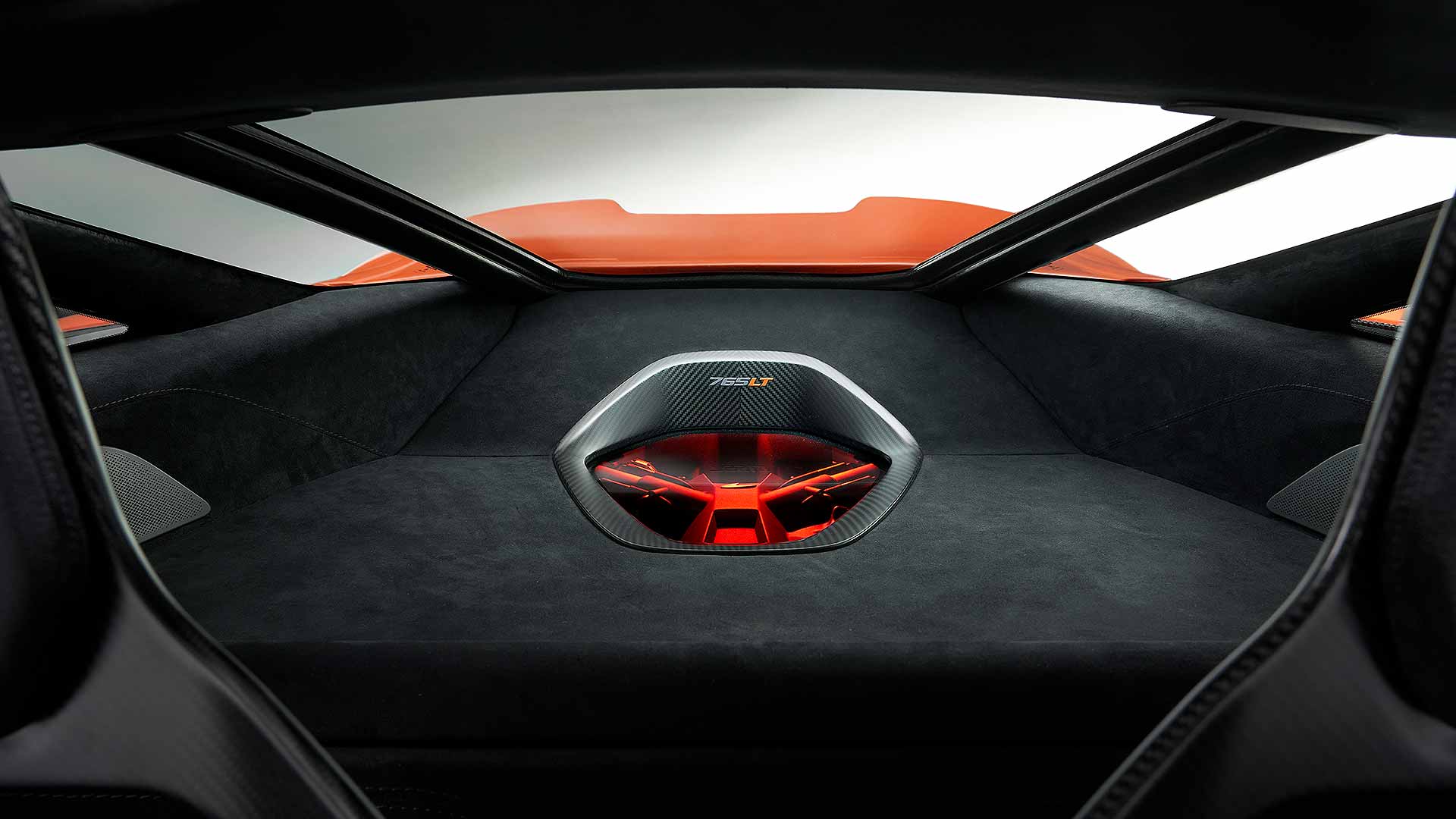 An optional double-glazed panel within the rear luggage shelf allows the engine to be viewed over the driver’s shoulder. A 765LT-branded carbon fibre frame supports the glass screen to showcase the McLaren logo on the plenum. Crucially, from a posing perspective, the engine can also be viewed from the outside, although privacy glass can be specified. 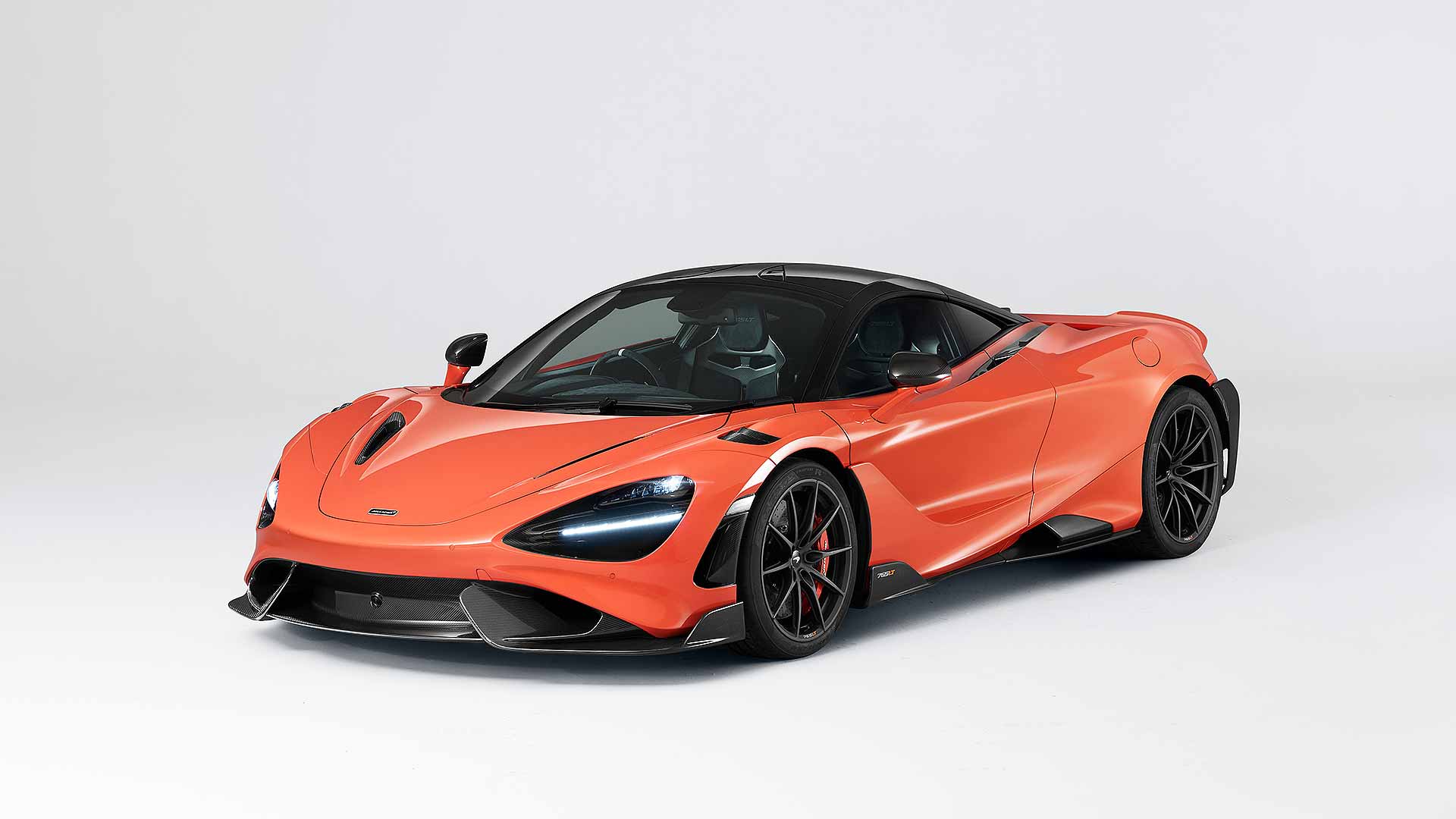 McLaren is promising ‘dynamic ability and precision’ on road and track. Highlights include quicker steering with more feedback, with the suspension honed using experience gained with the Senna and Speedtail. The front ride height is reduced by 5mm, while the front track is 6mm wider. 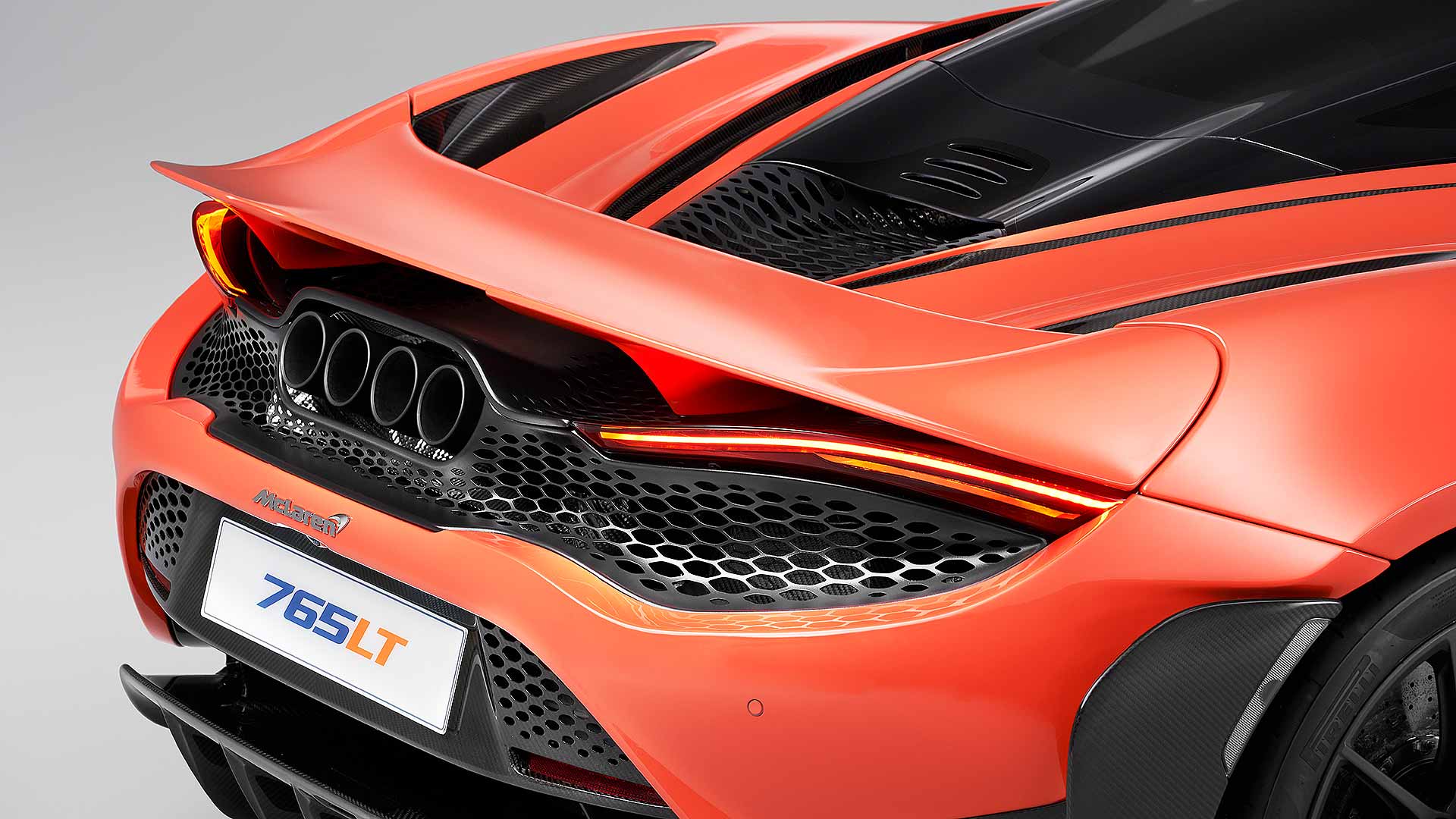 The rear wing has three positions with deployment settings bespoke to the 765LT. ‘Driver Downforce’ is engaged when the ‘Aero’ button is pushed, increasing downforce levels during high-speed cornering. DRS delivers drag reduction when acceleration. 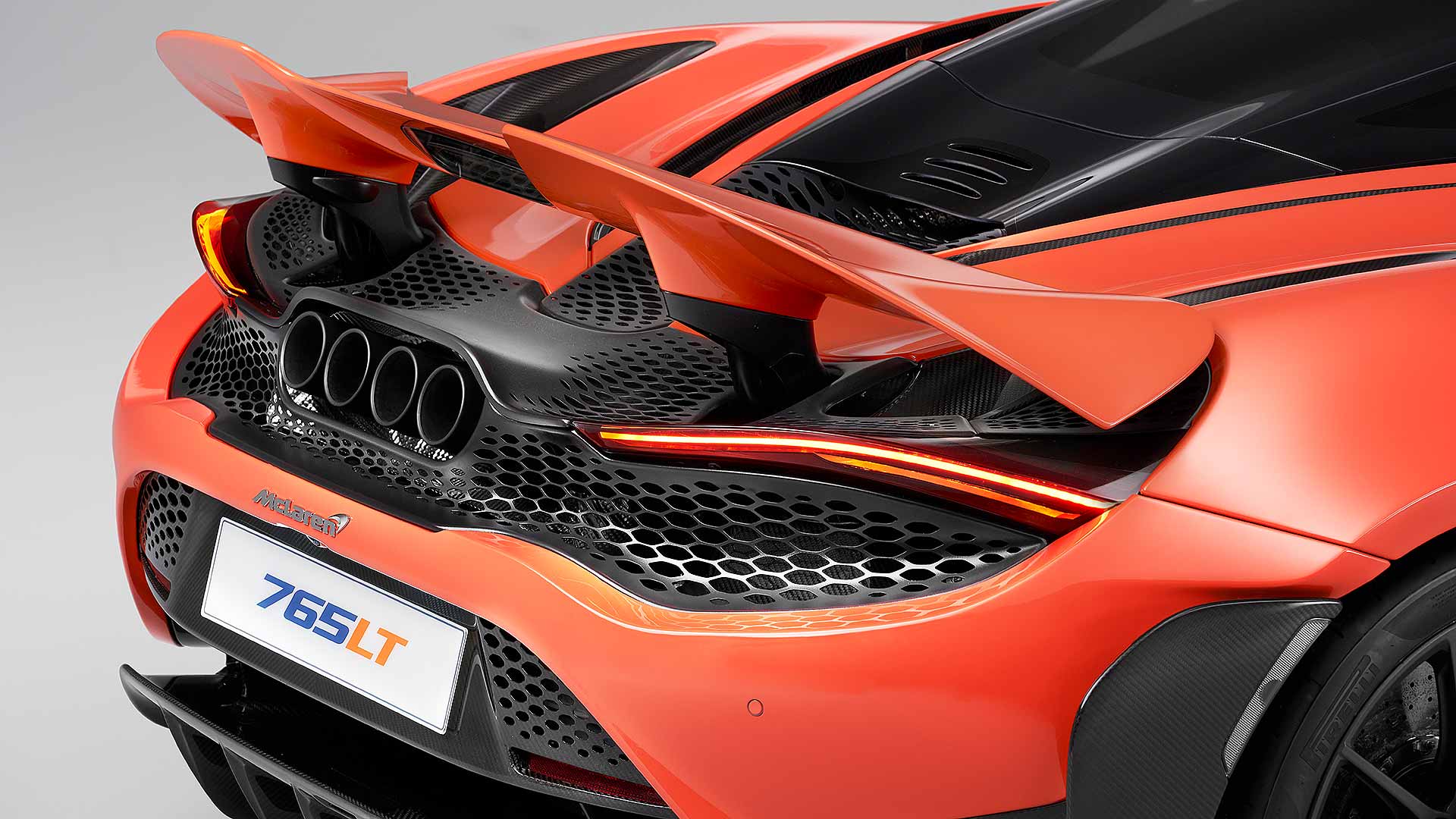 Finally, ‘High Speed Braking’ deploys the active wing in less than half a second, increasing rear downforce by more than 60 percent.

McLaren has also introduced a ‘limit downshift’ transmission function on the 765LT. The system will acknowledge the downshift request and will change the gear when the engine and road speeds can be harmonised.

Braking comes courtesy of carbon-ceramic discs, and calipers from the McLaren Senna, with F1-style integrated caliper cooling introduced on the 765LT. McLaren says brake pad temperatures are reduced by up to 50 degrees on the track. Speaking of which, a track brake upgrade adds carbon-ceramic discs from the Senna and bespoke LT brake pads.

The wheels are 10-spoke ultra-lightweight forged alloys created for the 765LT. They’re 22kg lighter than the wheels fitted to the 720S and are wrapped in Pirelli P Zero Trofeo R tyres. 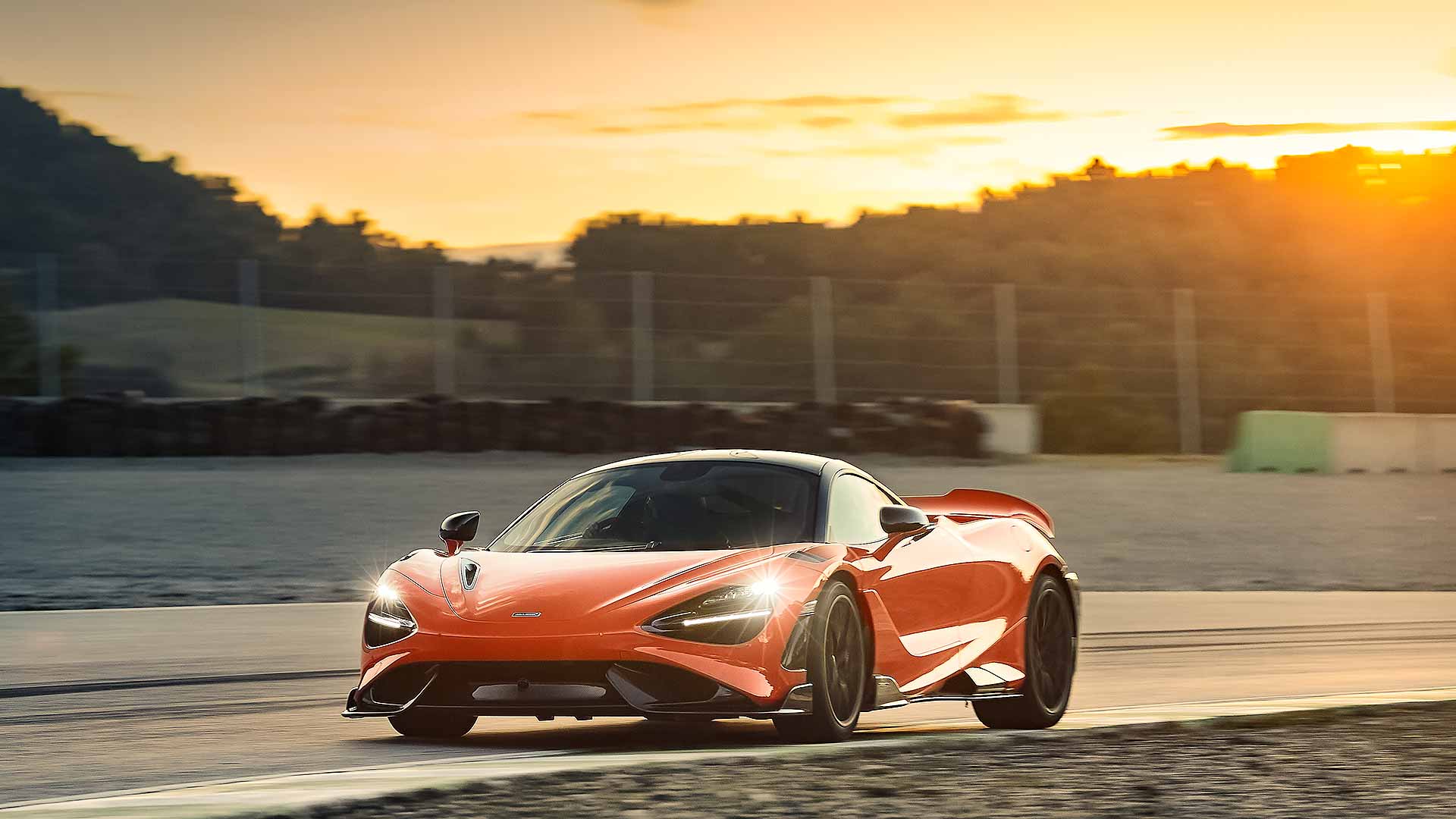 It would be glutinous to add options and accessories to a car displaying such obsessive levels of weight reduction, but we suspect many McLaren 765LT owners will find it hard to resist ticking a few boxes.

An eight-inch infotainment screen is fitted as standard, but a four-speaker audio system can be specified if required. A Bowers & Wilkins sound system developed for the McLaren Super Series is a further upgrade, as is a reversing camera, park assist and remote opening of up to three garage doors or house gates.

There are also eight interior colour themes, a choice of 17 exterior paint colours, along with a wealth of personalisation options available via the McLaren Special Operations catalogue. Track-focused owners might wish to add the Clubsport or Clubsport Pro packs.

Unusually for a car of this nature, it’s still possible to place an order. Just 765 will be built, with first deliveries expected in September 2020. We suspect our Tim Pitt will be one of the first in the queue when McLaren is organising press drives.