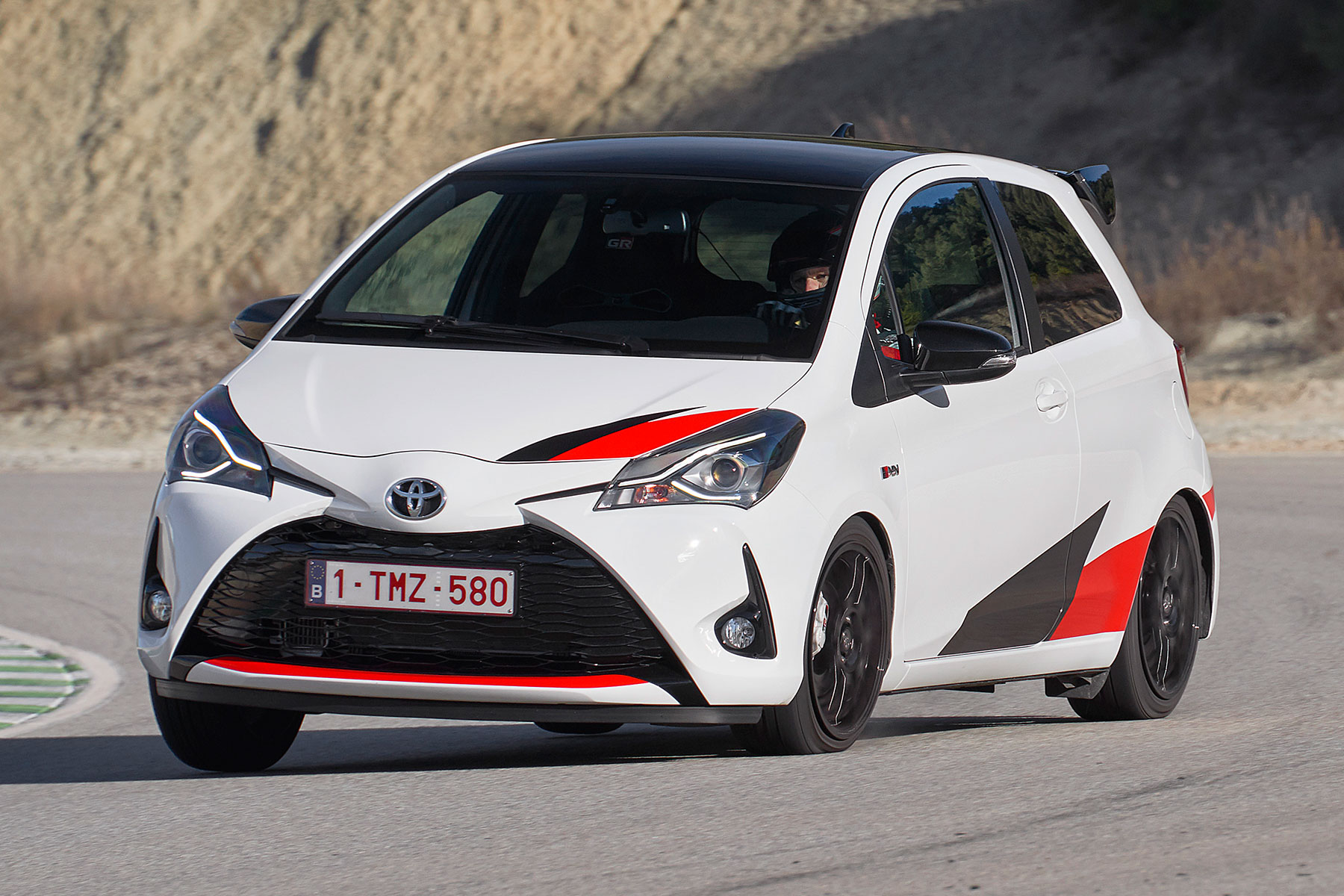 The Fiesta ST is dead, long live the Fiesta ST. That’s the presumed verdict, right? The Ford has been king of the pocket rockets for so long it’s become a cliché. But the old ST is no more, and the new three-cylinder version won’t reach showrooms until autumn 2018. Into that void screeches a new – and rather serious – hot hatch. Konichiwa to the Toyota Yaris GRMN.

In truth, the GRMN – it stands for ‘Gazoo Racing tuned by Meisters of the Nurburgring’ – is a small-volume skunkworks special, rather than a mainstream rival for the ST. Just 600 will be made: 200 Vitz for Japan and 400 Yaris for the rest of the world, including 80 cars for the UK. All are already sold. However, forget the numbers: bragging rights are at stake here. And the Yaris comes with strong credentials, including a supercharged engine, mechanical limited-slip diff and chassis honed at the ’Ring.

If that sounds special, so is the price. At £26,295, the GRMN costs twice as much as a basic 1.0-litre Yaris, and nearly £3,000 more than the excellent Peugeot Sport 208 GTI. Has Toyota done enough to claim the hot hatch crown?

When I worked at Which?, there were two cars we habitually recommended: the Honda Jazz and Toyota Yaris. Both were – and still are – practical, reliable, easy-to-drive superminis that delighted our resolutely sensible readers.

God knows what they’d make of this one. Decked out in what one Toyota insider describes as ‘Gazoo Racing warpaint’ the GRMN channels the spirit of the wild Yaris WRC rally car with bold black and red graphics, 17-inch BBS alloys, a tailgate spoiler and a centre-exit exhaust. The stickers are a no-cost delete option, but white (with a black roof) is your sole choice of paint colour. 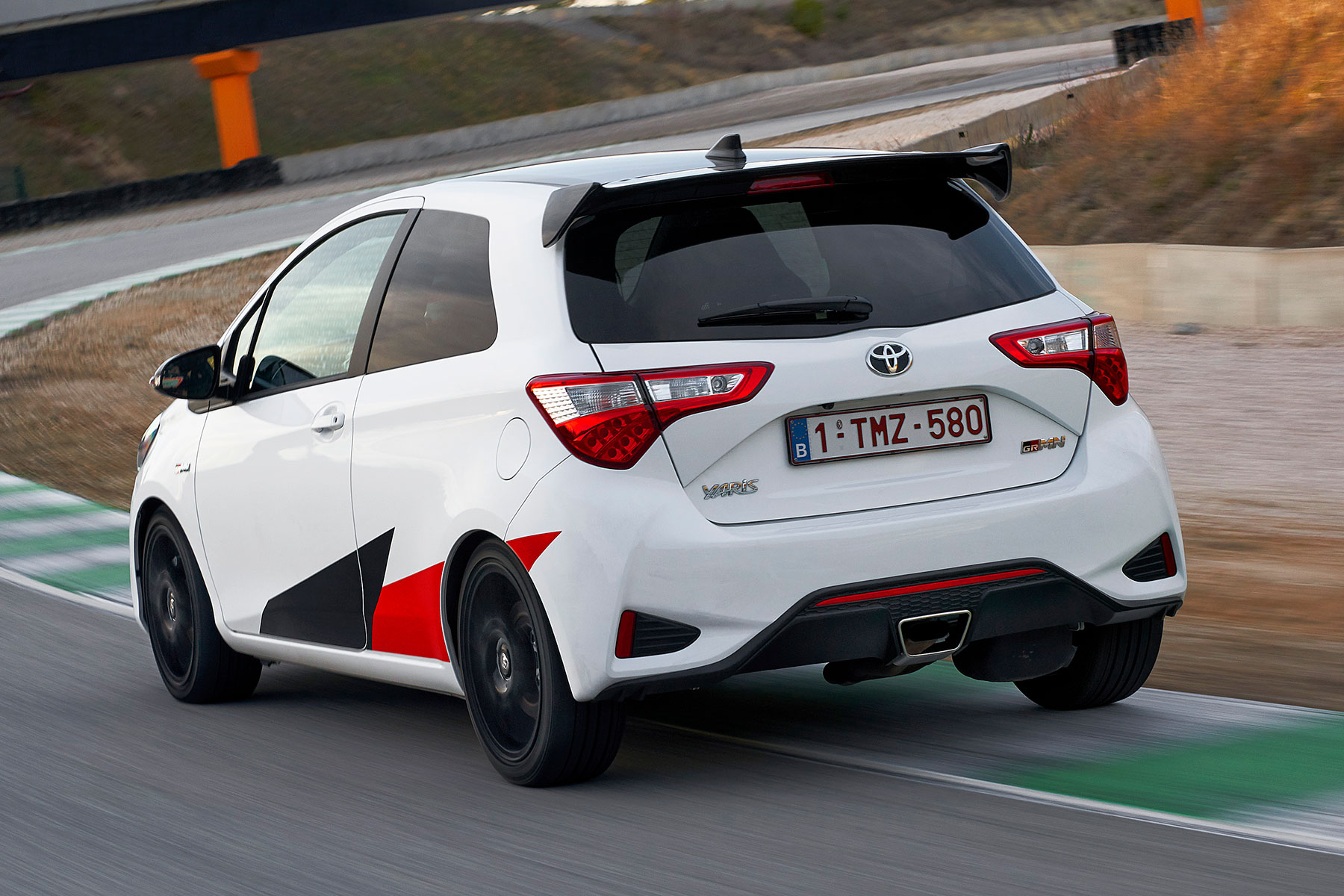 The Yaris is a statement of intent for the fledgling Gazoo Racing sub-brand, and as such packs a great deal of engineering into a small space. Its 1.8-litre engine uses a Magnusson-Eaton supercharger and is essentially the same unit found in the Lotus Elise – albeit with an additional intercooler and engine oil cooler to ensure that famed Toyota reliability. Drive goes to the front wheels via a six-speed manual gearbox and Torsen diff.

The chassis has been uprated, too. The GRMN rides 24mm lower on 60% stiffer springs and Sachs Performance dampers. Body braces are fitted and the front anti-roll car is beefed up, while the brakes are grooved discs with four-pot calipers. 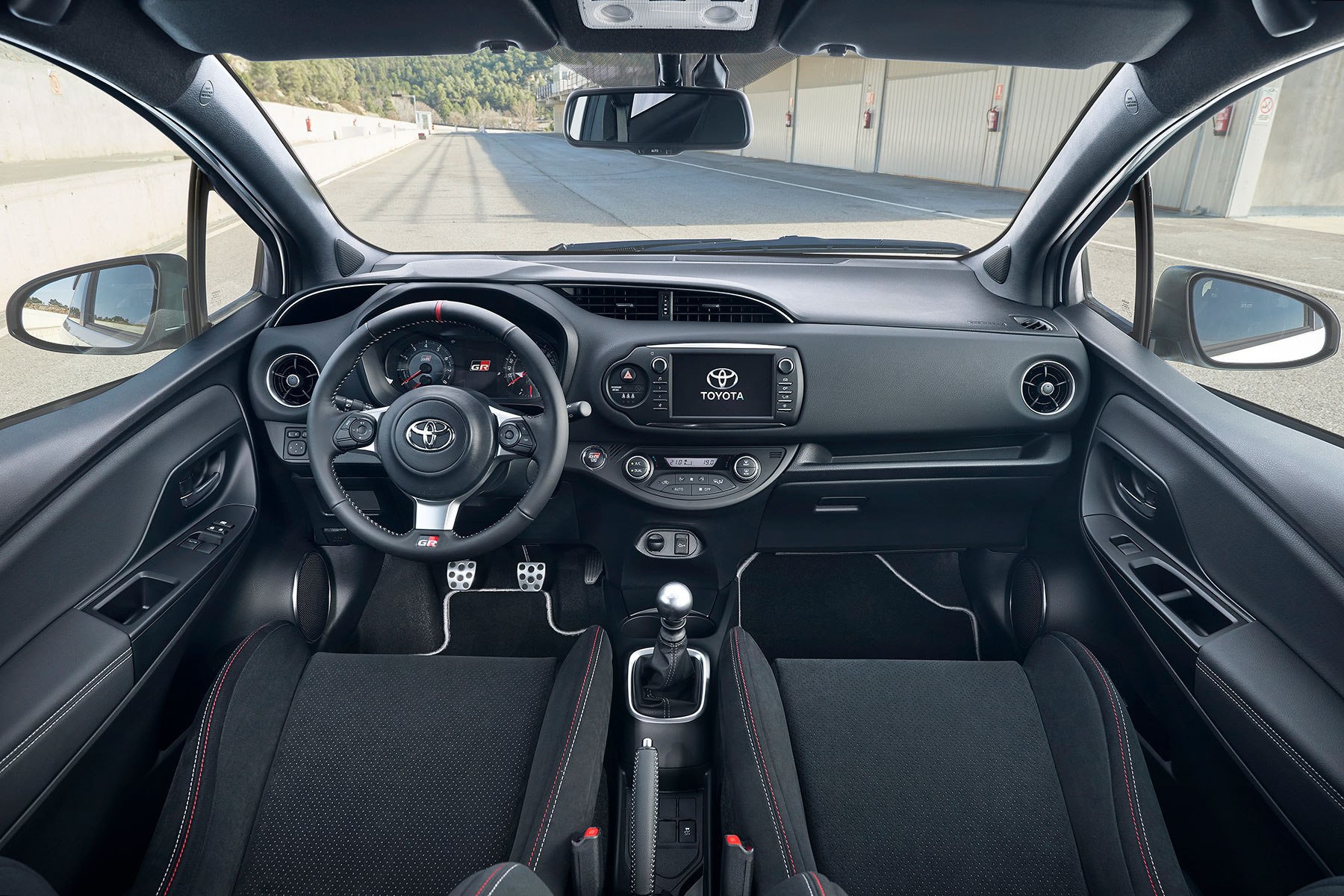 At first glance, the interior of the (three-door only) GRMN looks little different to any high-spec Yaris. Witness the decent ergonomics, dated touchscreen media system and acres of black plastic.

Look closer, though and there’s the smaller steering wheel from the Toyota GT86, plus alloy pedals and bucket seats trimmed in ‘Ultrasuede’ – the Japanese answer to Alcantara. Oh, and lots of Gazoo Racing logos.

Notably absent for a car of this type are any ‘drive mode’ buttons. You can’t switch from Comfort to Sport when the tarmac gets twisty; the GRMN is a one-size-fits-all experience.

The body-hugging seats are set rather high, but the wheel adjusts for reach and rake, so finding a comfortable driving position isn’t hard. Press the engine-start button and the Yaris fires with a muted bark. It sounds purposeful and authentic, without the overblown snap-crackle-pop theatrics of some hot hatches. This bodes well. 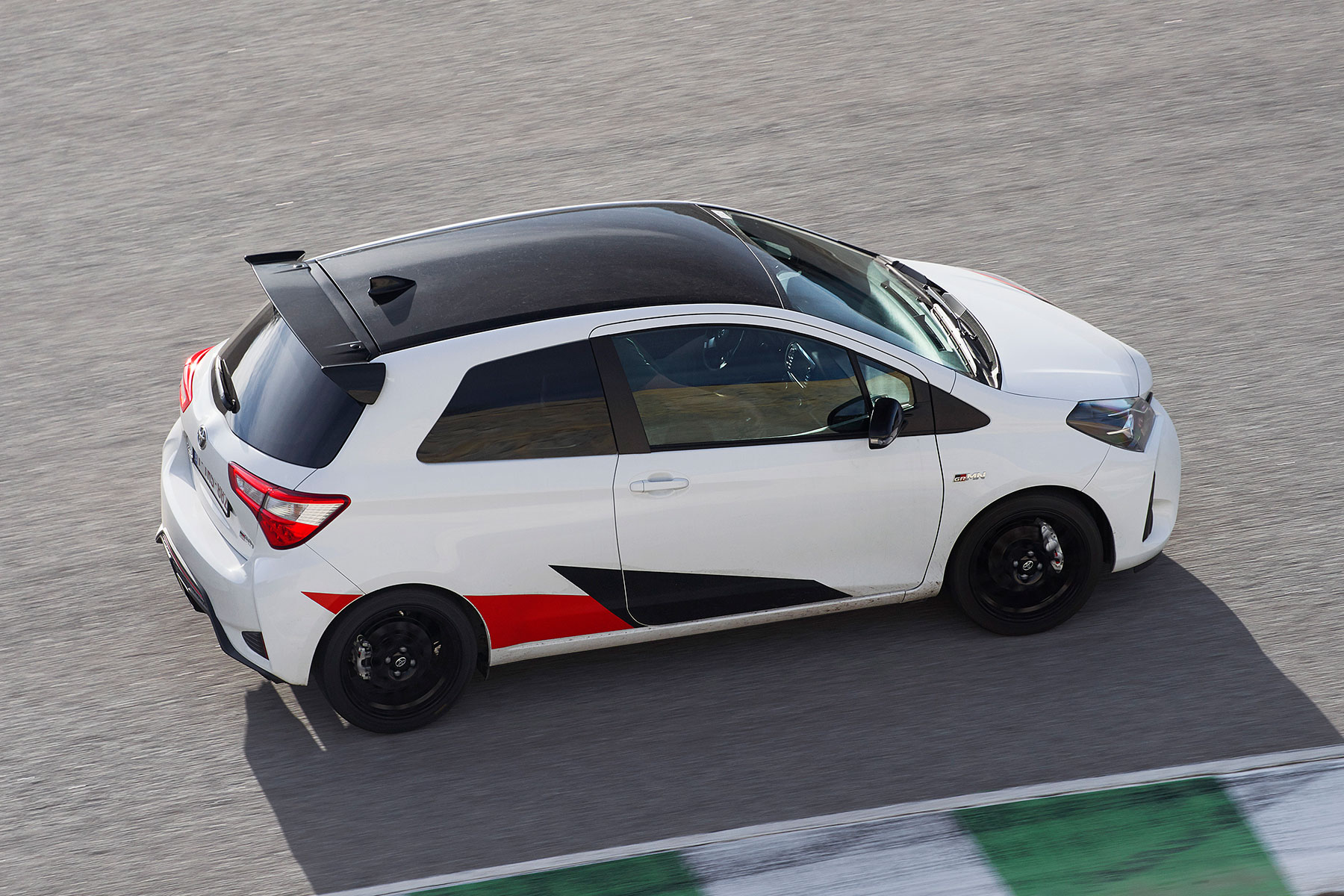 My first taste of the GRMN takes place at the ParcMotor circuit in Spain. It’s a sensational track, full of tight hairpins, late apexes and high-speed, off-camber corners. The perfect playground for a hot hatch.

The engine feels slightly flat below 3,000rpm, but beyond that thrust builds swiftly to the 7,000rpm redline. Keeping it on the boil through second, third and fourth gears around ParcMotor is easy; throttle response is instant and wonderfully linear, while the manual ’box feels slick and snappy.

The steering doesn’t have the fingertip intimacy of a Fiesta ST – or indeed a GT86 – but it’s lively, direct and refreshingly uncorrupted by torque steer. In slower corners you can detect the diff gamely trying to haul the front end around, while in faster bends the Yaris can be coaxed into tyre-squealing four-wheel drifts.

Toyota fitted semi-slick Bridgestone RE11S tyres for our track session, so grip was rarely an issue, although the brakes did soften noticably after a few hot laps. Otherwise, the car felt rock-solid: fast, forgiving and fun. 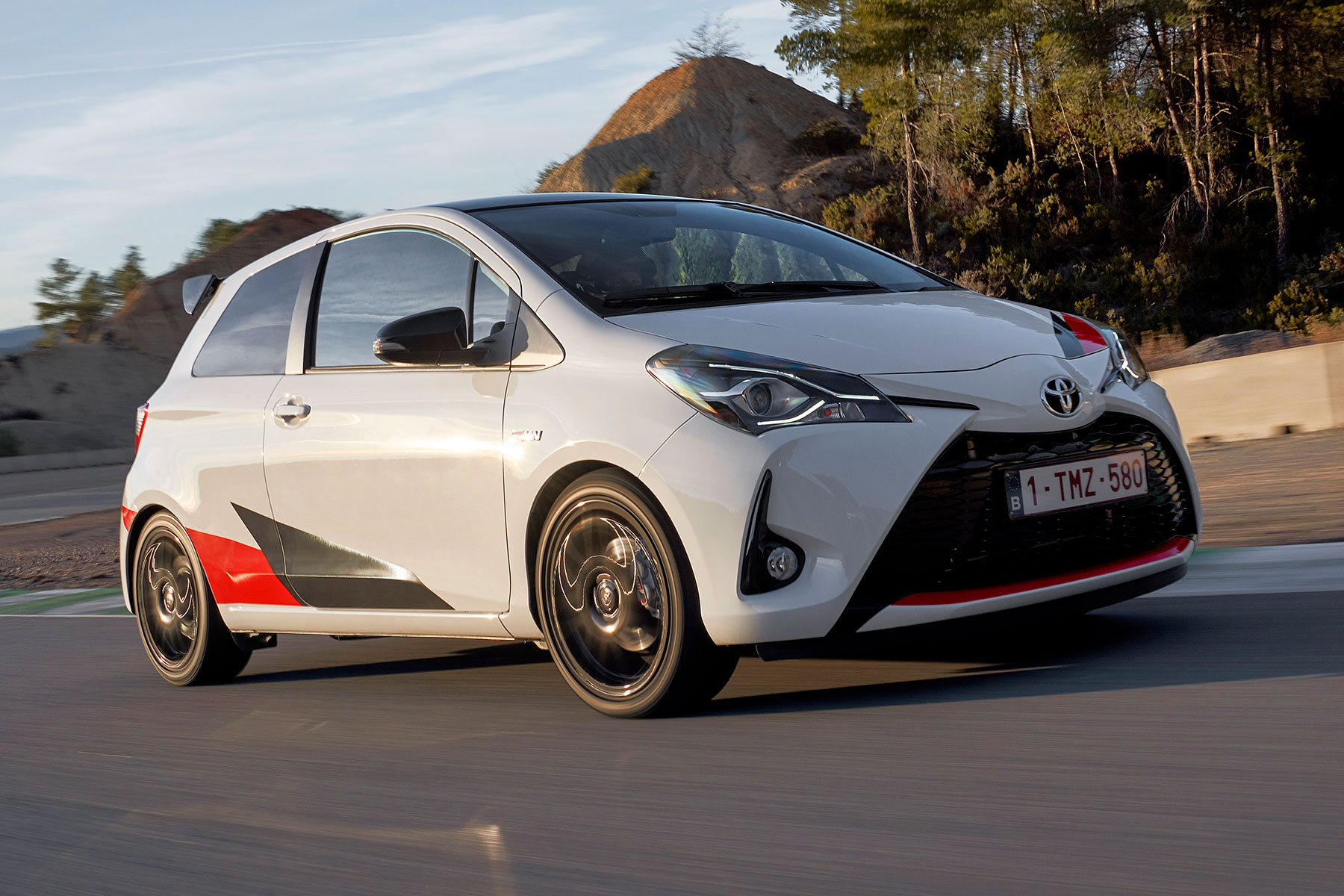 The second part of the drive was on the serpentine switchbacks that lead up to Montserrat, in the mountains above Barcelona. Now the car is shod with Bridgestone Potenza RE050 road rubber, and the challenges include overtaking lumbering tourist coaches and avoiding sheer drops.

Over the speed humps that mark the start and finish of every Spanish village, the GRMN feels abruptly stiff, but its ride softens with speed. Turn-in is eager and there’s very little body-roll: just poised, planted composure. This is no scrappy, point-and-squirt hooligan, but a well-sorted driver’s car.

Best of all, on the autopista back to the airport, the Yaris is calm, refined and relatively quiet. Like all the best pocket rockets, it’s a car for Sunday and Monday mornings. One-size-fits-all indeed. 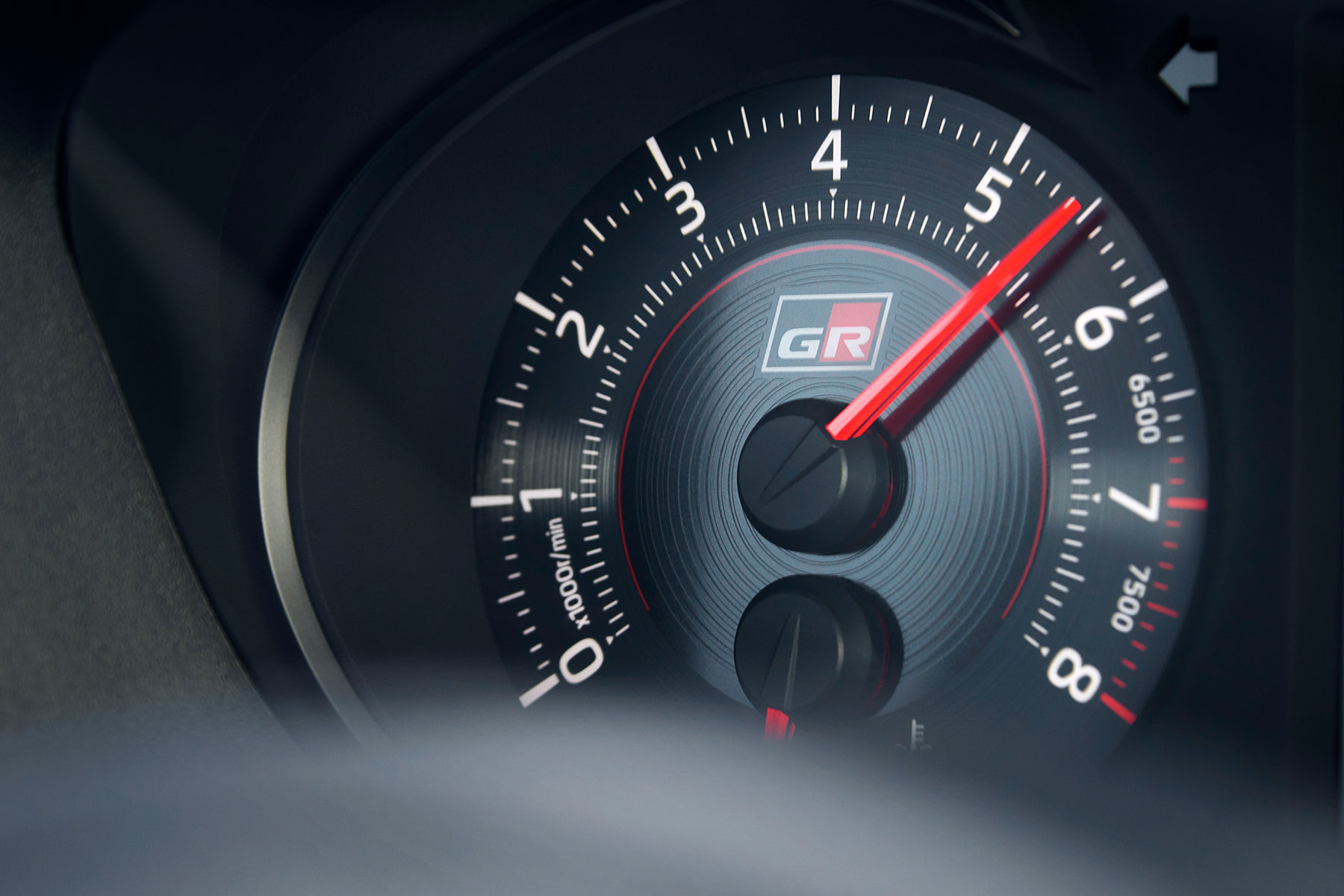 Has Toyota toppled the Fiesta ST? For my money, not quite. While the Yaris GRMN offers plenty of smiles per mile, it doesn’t quite possess the effervescent joie de vivre of the Ford.

Take the Fiesta out of the equation, though – as we should rightly do until the new ST arrives – and the waters are muddier. The Audi S1 is markedly more upmarket and scarcely more expensive, while the Peugeot Sport 208 GTI equals the Yaris for driving thrills and undercuts it on price. The Yaris, meanwhile, counters with rarity and competition kudos.

My money would go on the Peugeot (or, more realistically, a used ST), but I fully understand why someone else might choose the Yaris. There are no bad choices here.

Toyota has transformed an ordinary car into an extraordinary one and the future looks rosy for the Gazoo Racing brand. Can we have a GT86 GRMN next, please?

POSTSCRIPT: Le Mans and Yaris GRMN in the UK 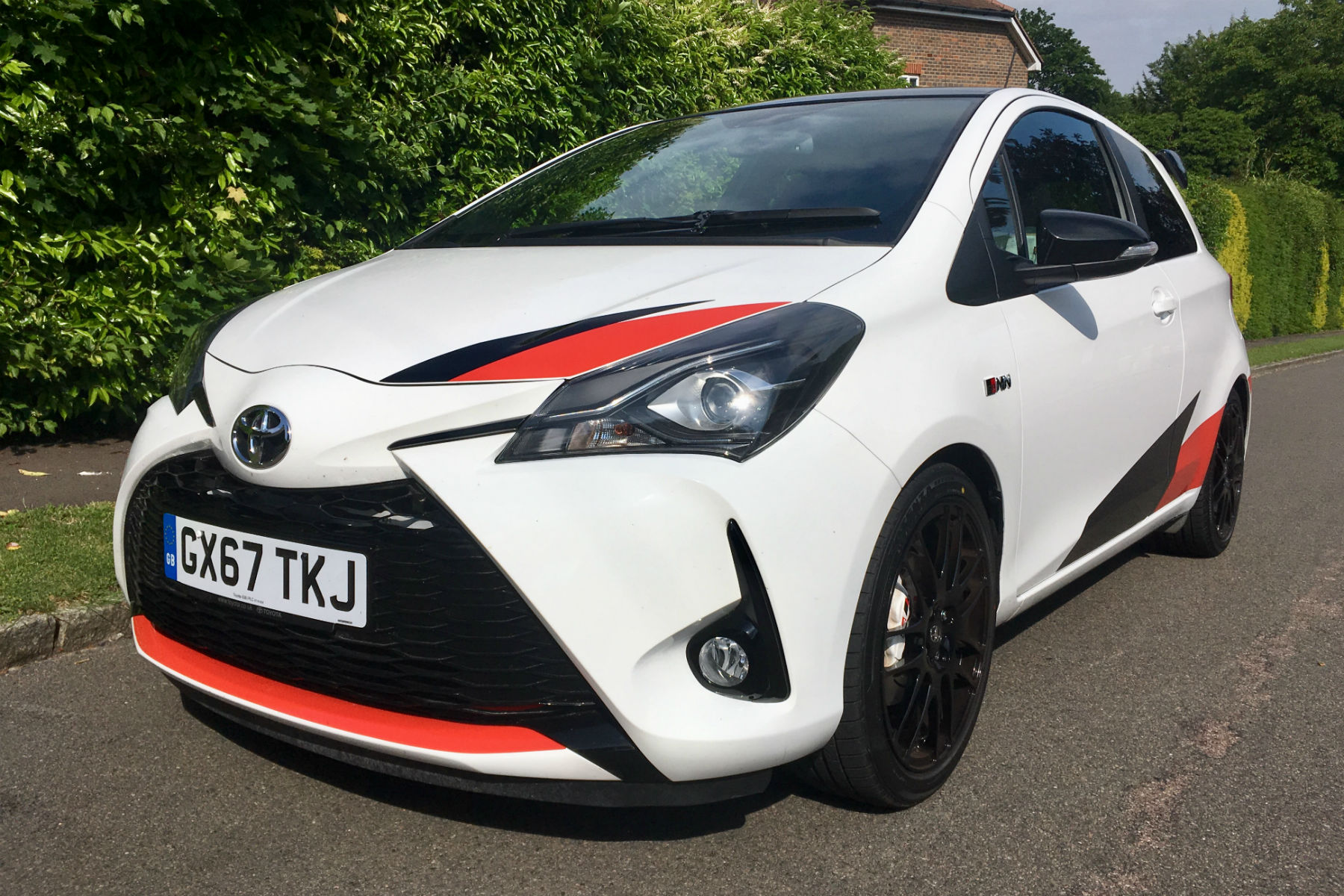 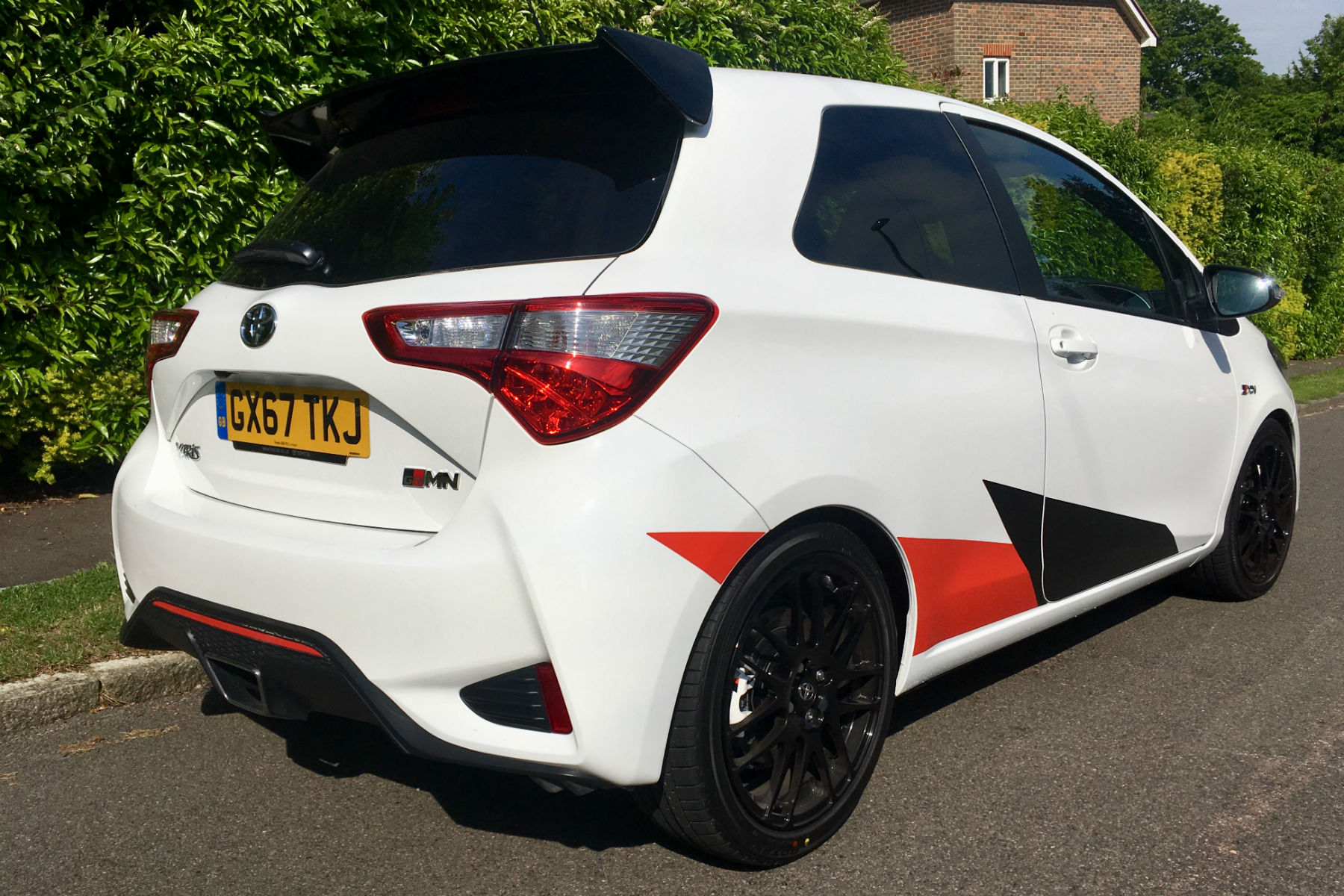 I write this having just returned from Le Mans, where Toyota – with a little help from Fernando Alonso – claimed a long-awaited first victory with the TS050 Hybrid LMP1 racer. Red, black and white ‘GR’ branding was everywhere, cementing the idea of Gazoo Racing as an emerging force to be reckoned with.

I also chatted with Tetsuya Tada, chief engineer for the GT86 and forthcoming 2019 Supra. And while he said nothing about a GT86 GRMN, he did – strongly – suggest that a Supra GRMN is in development. Given the almighty chasm between a boggo Yaris and the Gazoo version, one can only speculate what a similarly hardcore Supra might offer.

Above all, Le Mans and Tada-San reaffirmed that Toyota is serious about sports cars again. And for those of us who grew up with the WRC Celica GT-Four and Castrol Super GT Supra, that’s emphatically a good thing. 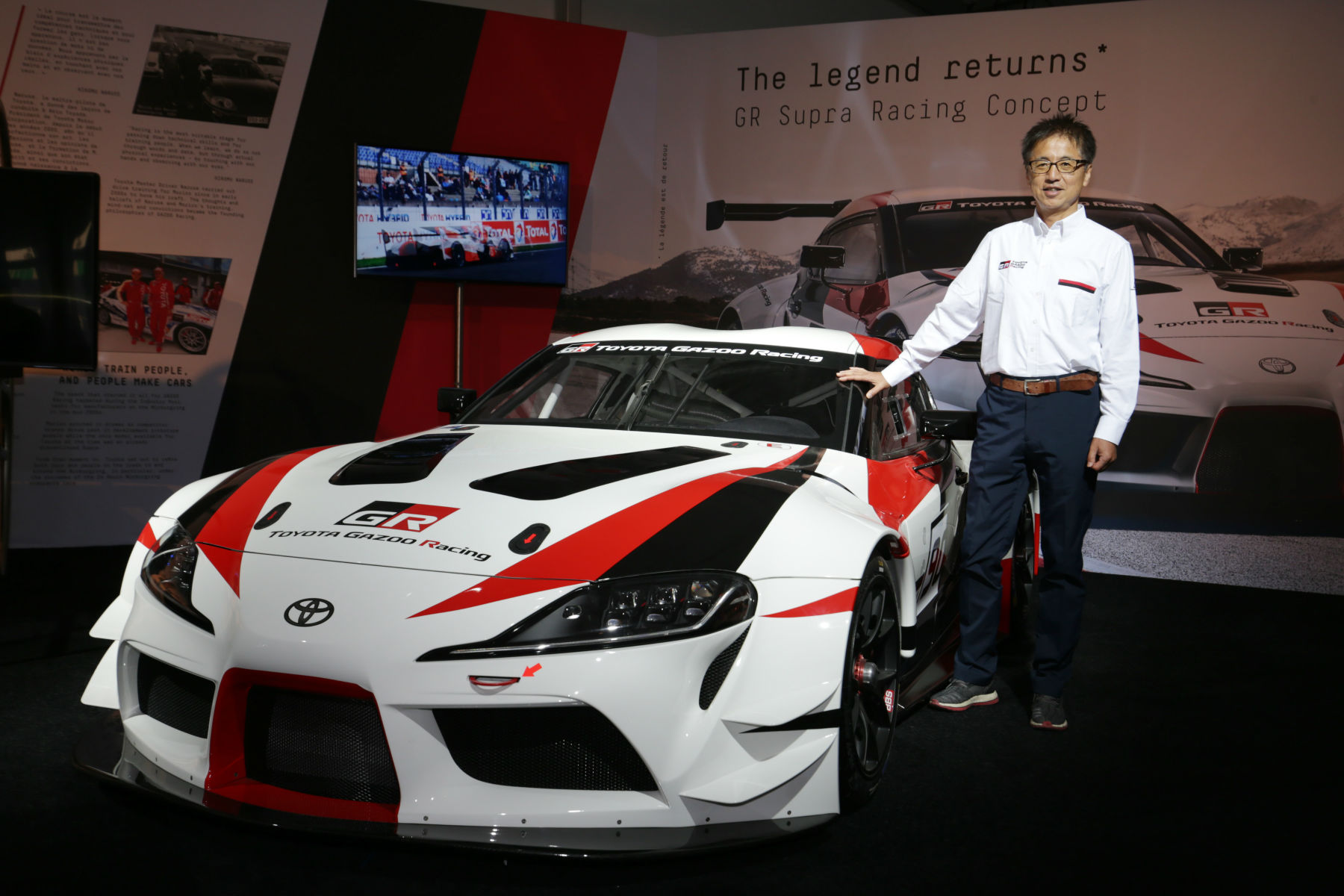 Back in the UK, I had chance to sample the Yaris GRMN again – this time on more familiar terrain.

There’s always a worry that our crumbling, cruddy roads will get the better of stiff, sporty suspension (witness how gushing first reviews of the Mk2 Focus RS were toned down after the car was driven here), but the GRMN holds its own. Yes, it’s firm and occasionally hits the bump-stops, but there’s enough pliancy to prevent the car feeling skittish.

It’s compact size (shorter and narrower than a Fiesta) is a real boon on UK roads, too. On hedge-lined lanes where supercars or sporty SUVs would be over the white line, you can carry speed with confidence. It takes a cool head not to get carried away. 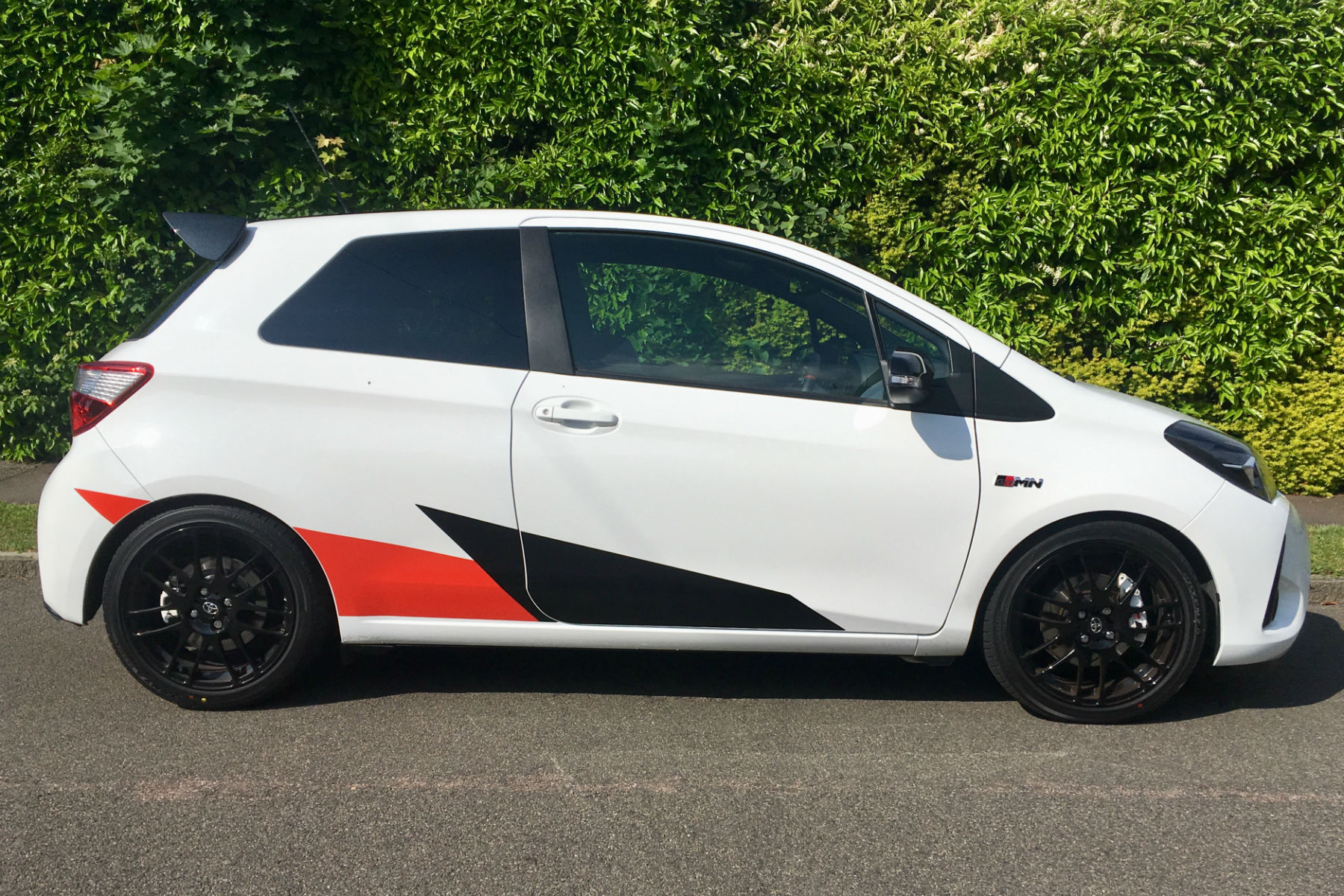 After five days with the GRMN, including several school runs and the inevitable M25 tailback, my thoughts on the car hadn’t changed. It’s still five-star fun, but gets four stars overall – mainly because of that £26,295 price tag.

By now, you’ve probably seen the rave reviews for the latest Fiesta ST, including from MR’s Richard Aucock. I haven’t tried the car yet but I suspect that, at £18,995, it will claim a level-headed victory over the GRMN.

Nonetheless, that doesn’t mean the Yaris GRMN isn’t special, and a dead-cert future classic. Gazoo Racing is on a roll.