A new diesel engine makes the 2015 Evoque the most efficient Land Rover ever. 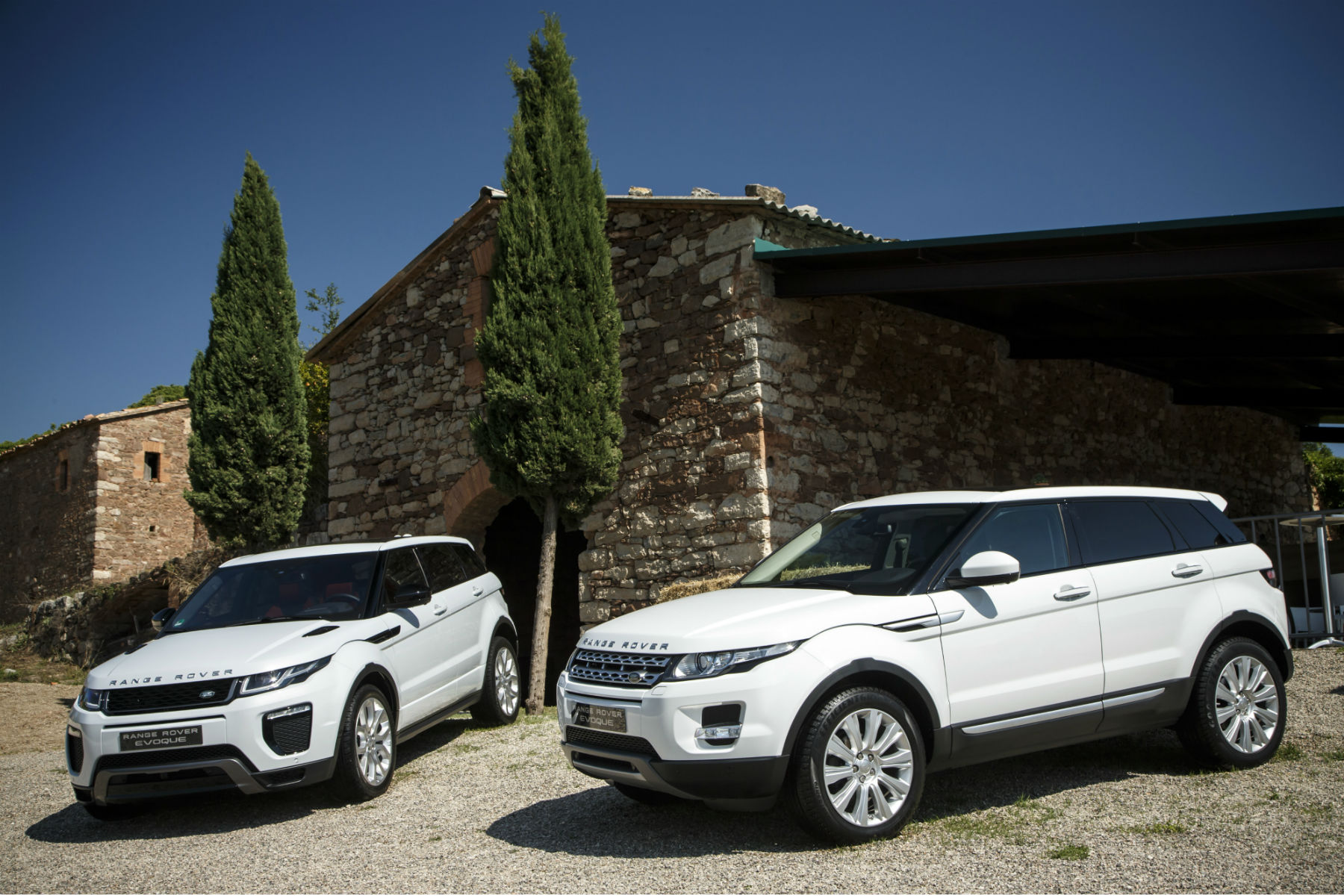 Like the original Audi TT or MINI, the Range Rover Evoque was an ‘It car’ – a must-have four-wheeled fashion accessory. A long waiting list followed its launch in 2011, and more than 450,000 have since found homes. In fact, one in three Land Rovers sold worldwide is an Evoque. However, fashion is fickle and, four years later, the car is due a mid-life facelift.

At first, you will struggle to spot the differences, but that’s probably a good thing. It still looks radical – like a concept car with number plates. Plus, having modelled the rest of its Range Rover line-up on the Evoque, Land Rover wasn’t likely to sanction a radical redesign.

The big news, though, is under the bonnet – specifically the new 150hp or 180hp 2.0-litre Ingenium diesel engine. It transforms the Evoque into the most efficient Land Rover ever made. In 150hp two-wheel-drive guise with a manual gearbox, it returns 68mpg and CO2 emissions of 109g/km – impressive figures for a car of this type. 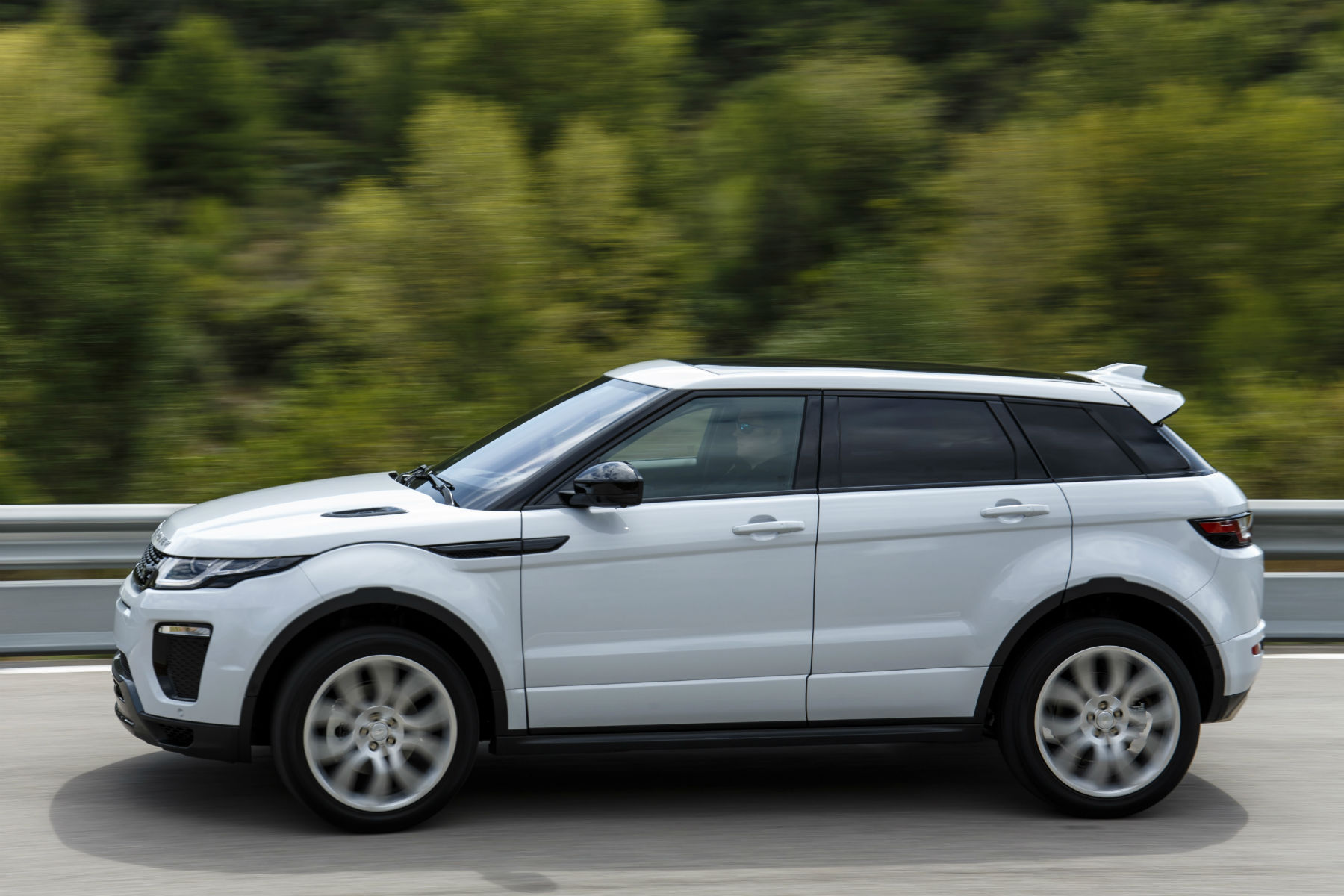 The Evoque is also offered with a 240hp petrol engine (not available to drive on the launch), plus six-speed manual or nine-speed automatic gearboxes. Buyers can opt for two-wheel drive, four-wheel drive or Active Driveline, which switches between the two depending on road conditions.

Five-door and three-door ‘Coupe’ versions of the Evoque are identically priced, giving you a straight choice between function and fashion. 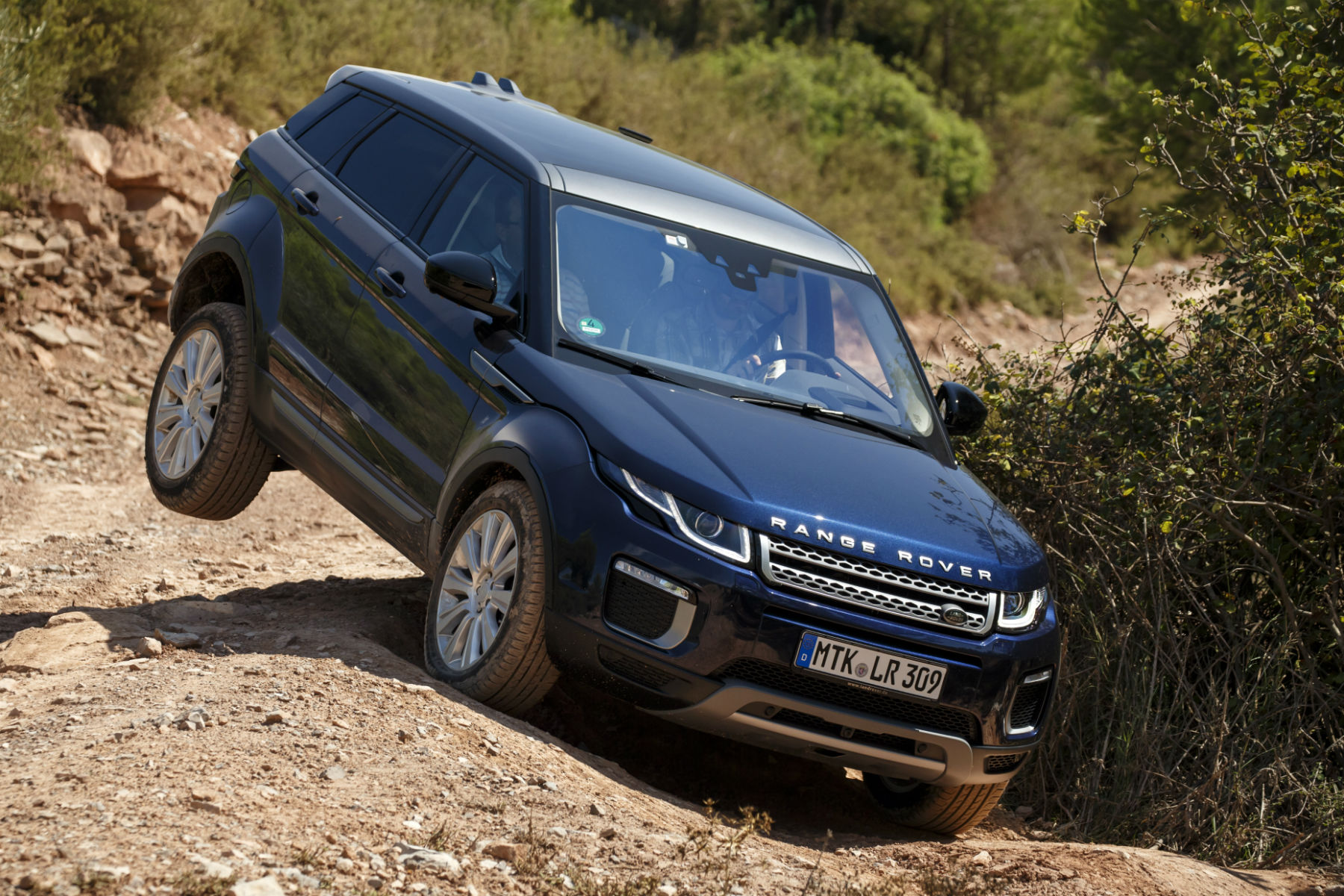 Range Rover Evoque:  On the road

No Land Rover launch would be complete without some hill-climbin’, mud-squelchin’, river-fordin’ off-roading. But let’s start with how the car copes on Tarmac – undoubtedly where 99% of Evoques will spend 99% of their time.

It’s a cliche to describe SUVs as being ‘car-like’ to drive, but the Evoque genuinely is. High driving position aside, it feels like a sporty hatchback, with eager steering and little body-roll when cornering. On tortuously twisty Spanish mountain roads, it was fast, confidence-inspiring and fun.

If anything, the Evoque’s steering is a little too sensitive for motorway driving; the regular corrections needed at speed make longer journeys feel tiring. We’d welcome a bit more feedback through the chunky three-spoke wheel, too.

However, ride comfort is good – certainly better than some German rivals – and wind noise is well-suppressed, despite the car’s bluff-fronted shape.

The new Ingenium diesel is also commendably hushed. Even under full acceleration, the noise from the lightweight aluminium engine is more petrol purr than commercial clatter. 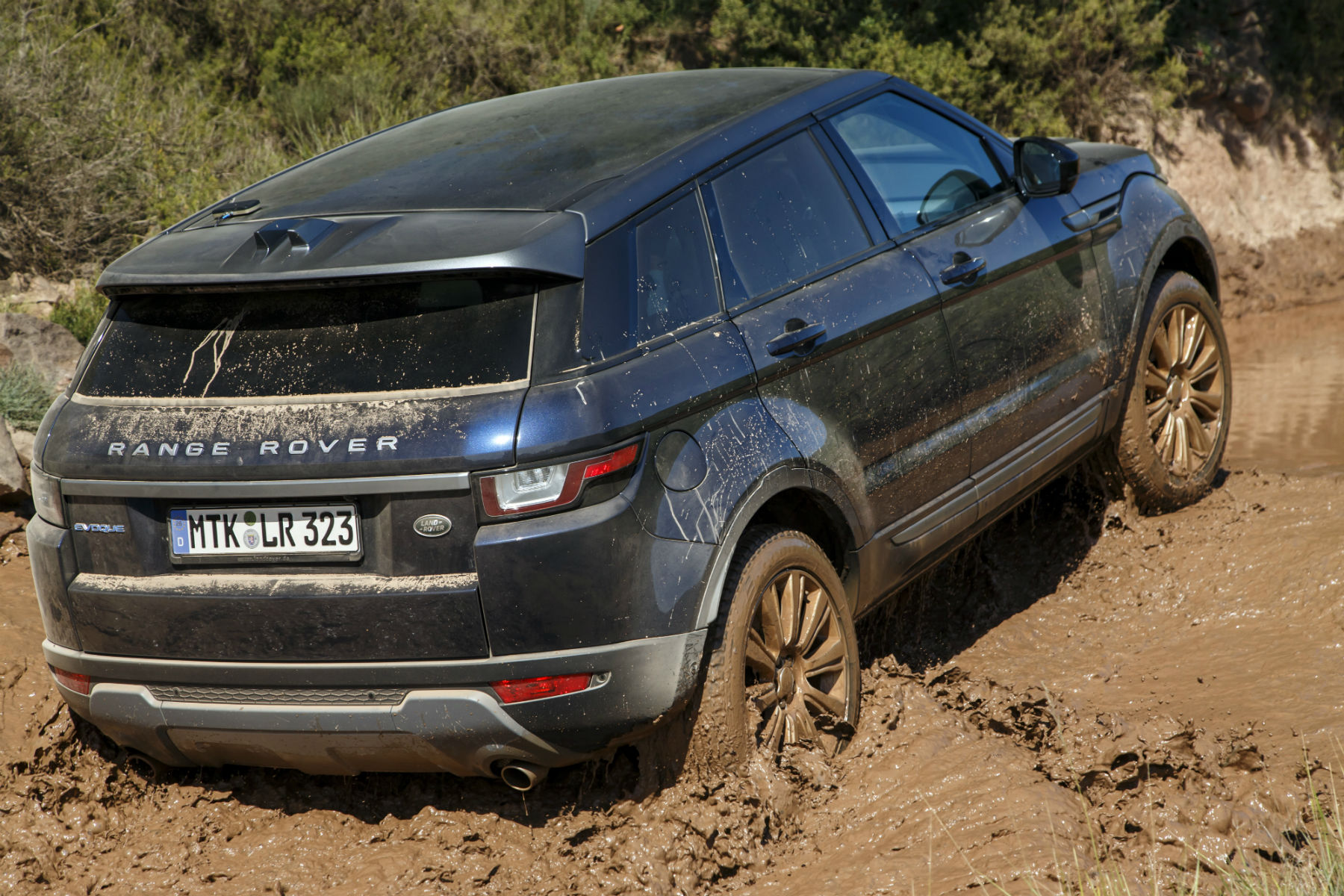 The 150hp unit powers the Evoque to 62mph in 11.2 seconds, while the 180hp version shaves that to 10.0 seconds. However, that additional 30hp makes little perceptible difference on the road; both offer ample mid-range torque for swift, safe overtaking.

The standard six-speed manual gearbox has a short throw and feels pleasingly mechanical. But we’d fork out £1,800 for the smooth-shifting nine-speed automatic, which also comes into its own for off-road driving.

Ah yes, the rough stuff. You may scoff, but the Evoque’s ability to bump over boulders and slither down sand dunes is arguably more relevant than a sports car being able to exceed 150mph. At least if the apocalypse strikes, you’ll have an escape plan.

We tried both front- and four-wheel-drive models at the Les Comes Land Rover Experience centre near Barcelona. Steep gravel switchbacks, deep muddy ruts and a particularly scary bamboo bridge provoked moderate sweating and occasional swearing from driver and passenger. Yet the Evoque handled them with ease.

In the unlikely event you do want to take your Evoque off-road, the automatic gearbox offers All-Terrain Progress Control – essentially a low-speed cruise control for slow and steady progress over tough terrain. With the system activated, the Evoque feels almost unstoppable; it hauls itself up hills and over obstacles with studied nonchalance. 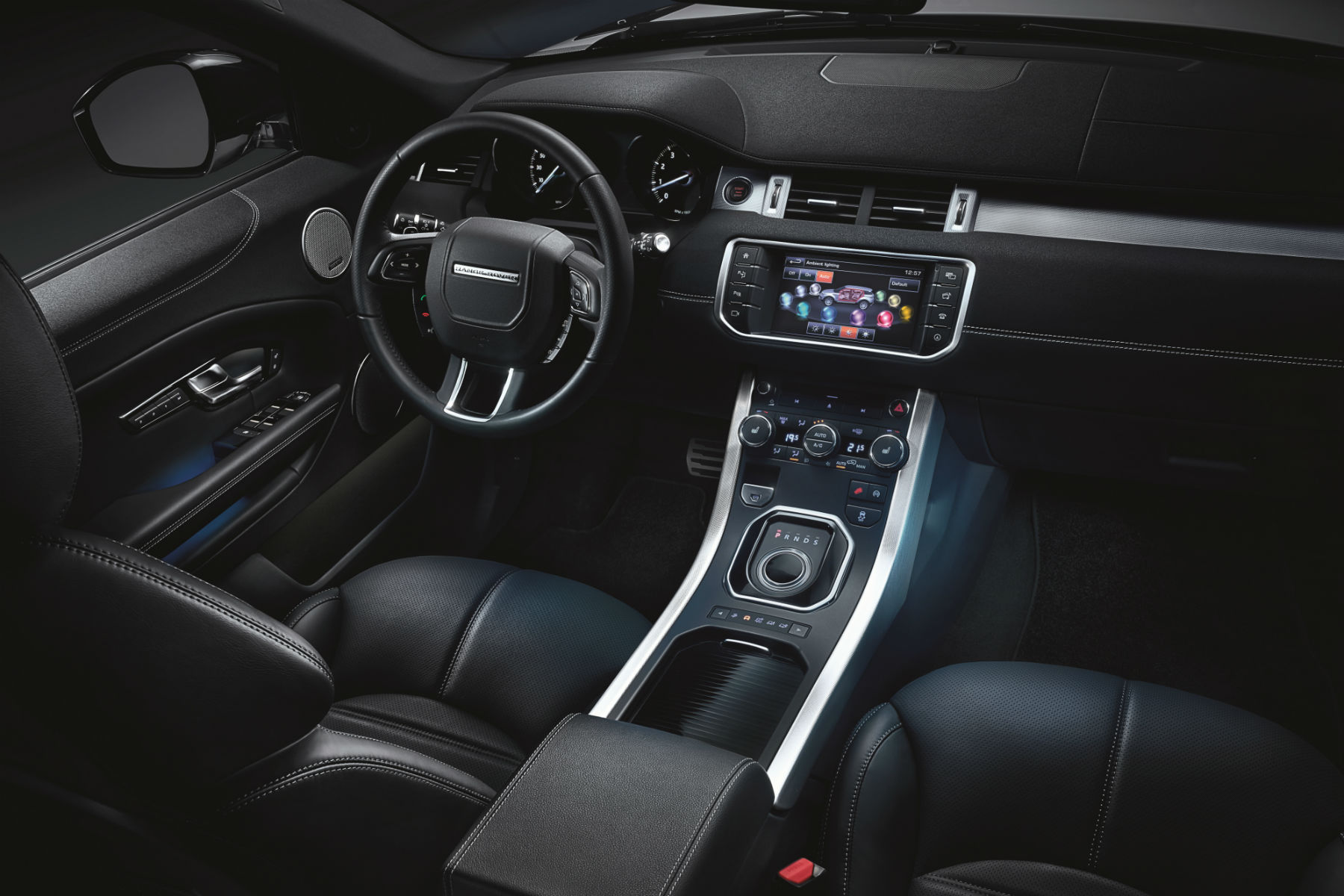 Range Rover Evoque:  On the inside

Interior space has never been the Evoque’s strong point – thank those bulbous wheelarches and that stylishly sloping roofline. It’s acceptably roomy in the front, but the rear bench is best suited to children or teenagers.

So its ideal for young families then? Not really. The 575-litre boot can swallow a weekly shop, but you’d struggle to squeeze in a large baby buggy. If you need space for kids/dogs/bikes/flat-pack furniture (delete as appropriate), Land Rover’s own Discovery Sport is an eminently more sensible choice – plus it has the option of seven seats.

Despite all of the above, the Evoque’s cabin is a pleasant and undeniably ‘premium’ place to be. Upgrades for 2015 include soft leather padding on the door panels and a redesigned centre console (still with Land Rover’s trademark big buttons, which are designed to be pressed by gloved hands). No mention of Victoria Beckham helping with the design this time, though… 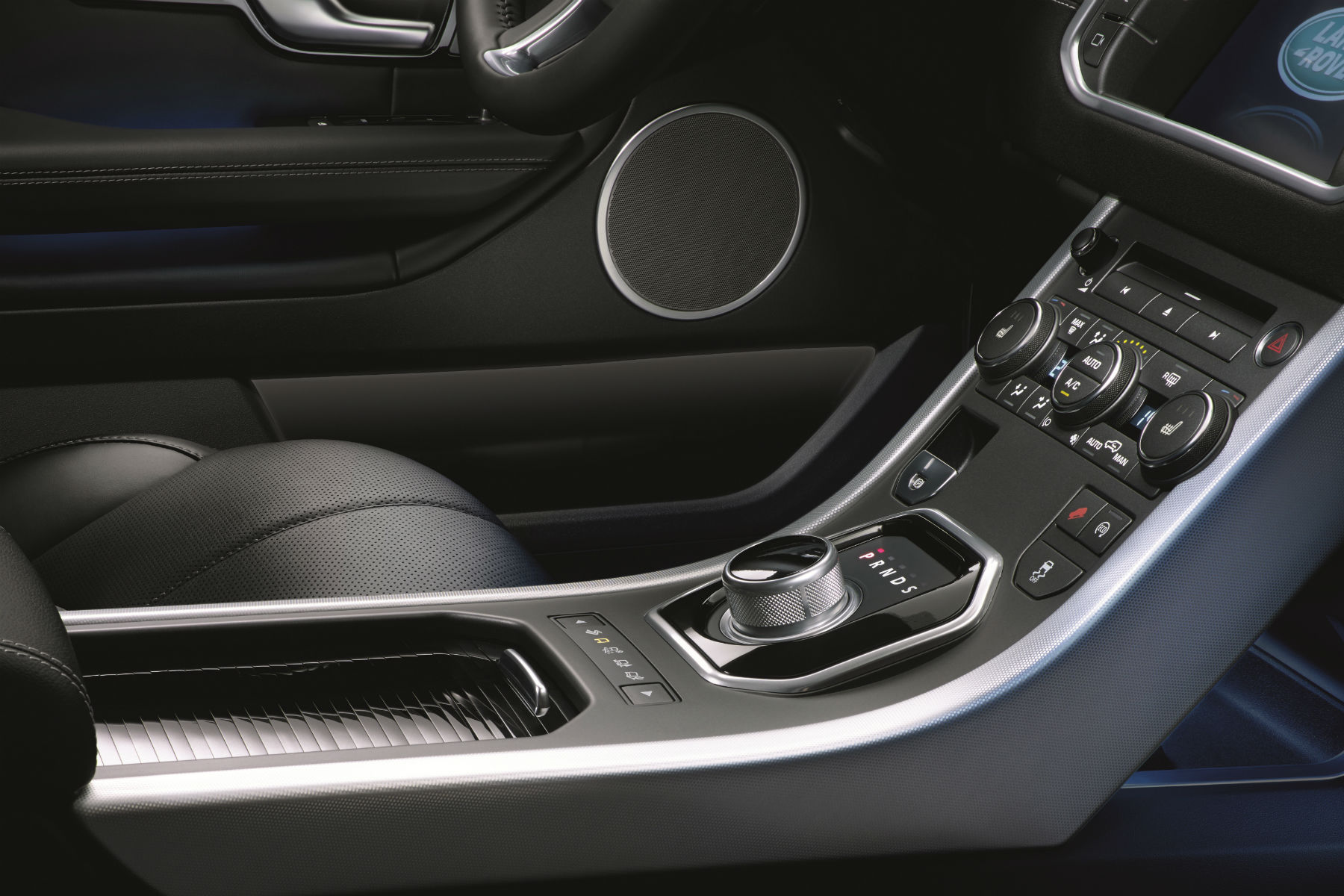 The new InControl Touch media system is certainly a step forward. However, confusing sat nav graphics led to an unscheduled detour through Barcelona’s not-very-scenic industrial estates. We’d also prefer a separate joystick or clickwheel controller – as offered by Audi, BMW and Mercedes – rather than merely a touchscreen; they are simpler and safer to use while driving. 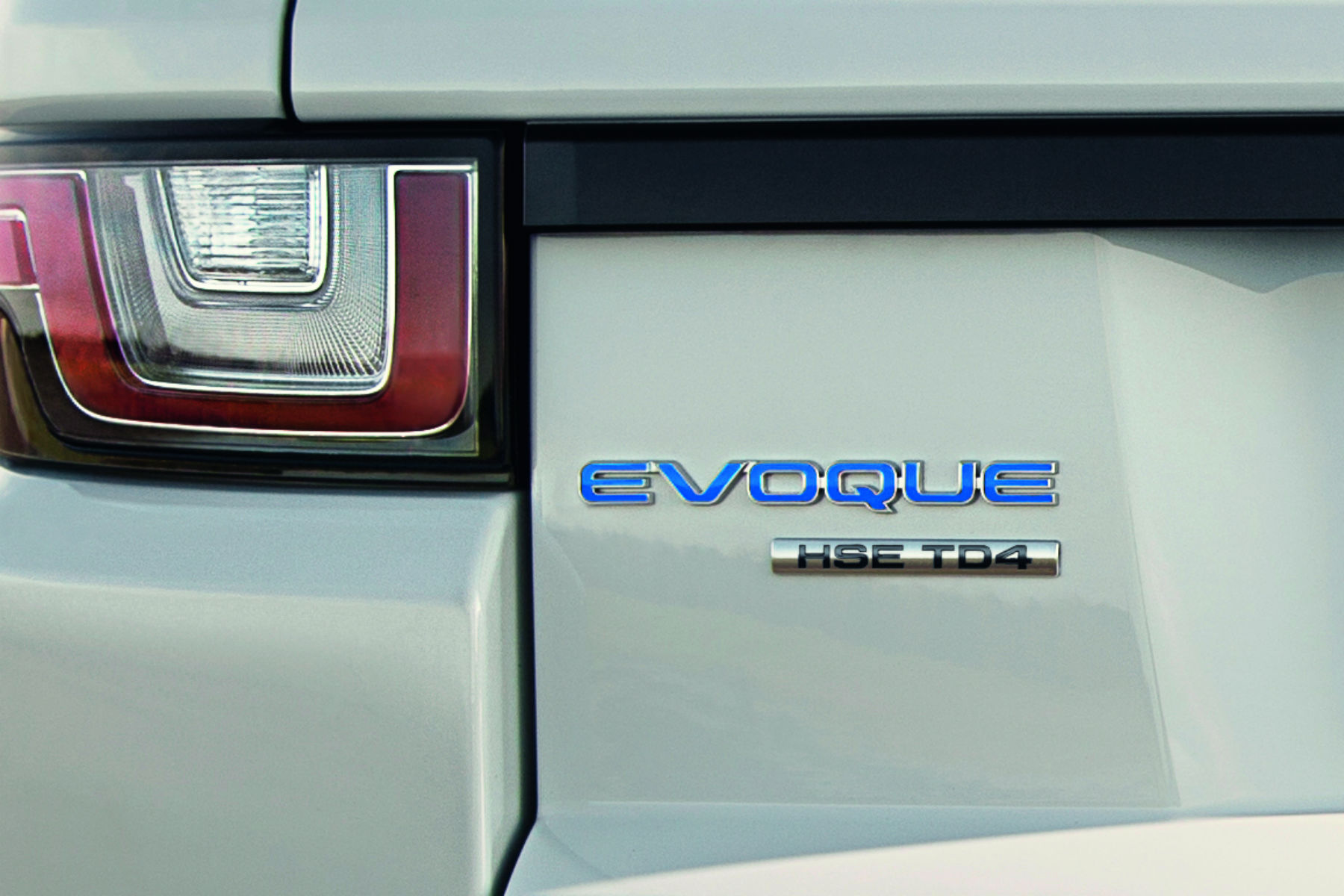 Land Rover is proud of its new diesel engines, and rightly so. The most efficient 150hp two-wheel-drive models are now dubbed ‘E-Capability’ and wear a blue (rather than red) Evoque badge on the tailgate.

Land Rover claims 68mpg for the Coupe in E-Capability guise – better than the most economical Audi Q3 or BMW X1. CO2 emissions of just 109g/km equate to annual car tax (VED) of £20. Comparative figures for the five-door version are 65.7mpg, 113g/km and £30.

This 16% improvement in efficiency versus the outgoing car is particularly good news for company car drivers. It translates into Benefit-In-Kind tax savings of 3%. Extended service intervals – stretched from 16,000 to 21,000 miles – drive down those all-important running costs, too. 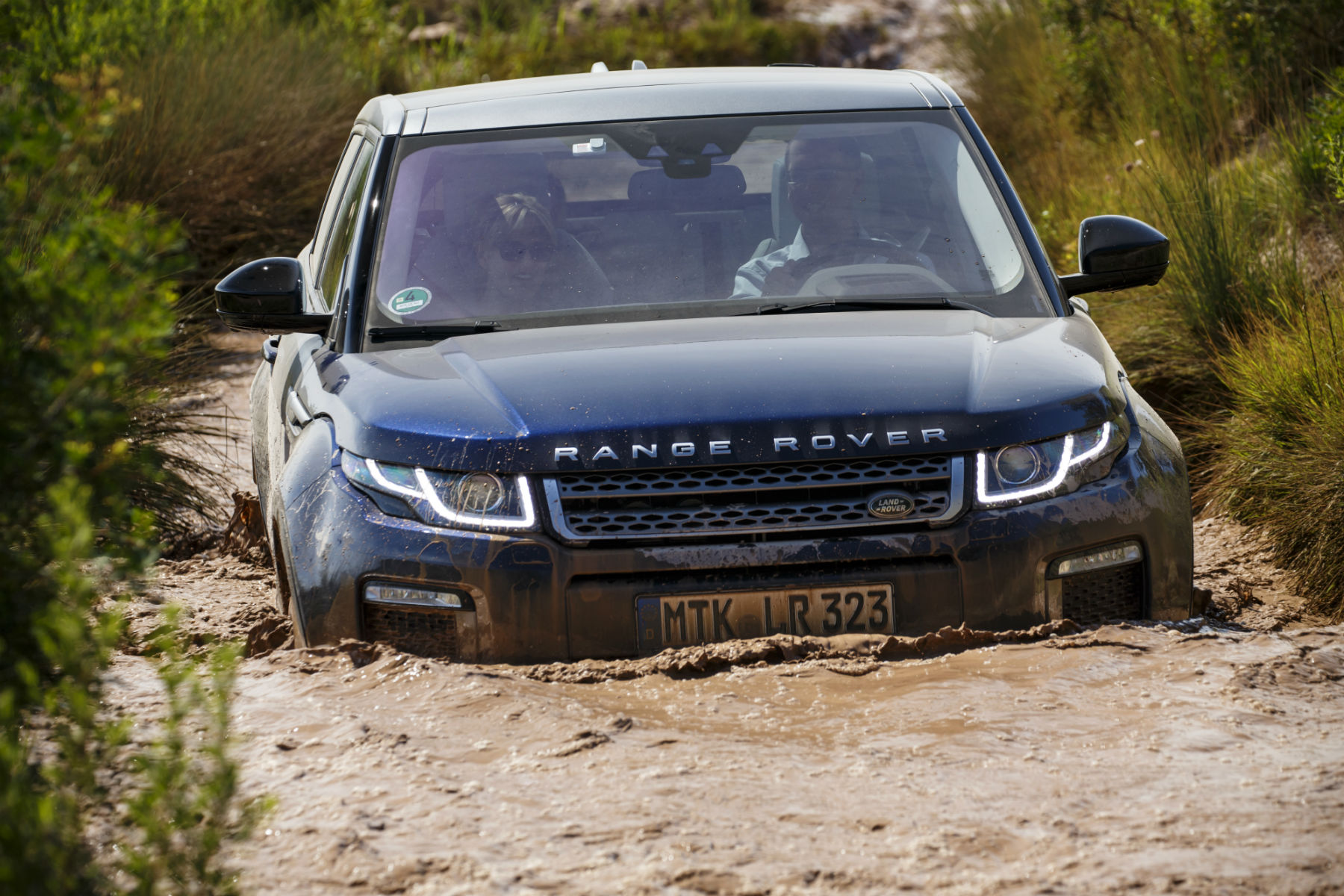 Has Land Rover done enough to keep its ‘It car’ fresh and fashionable? Well, we can’t predict the whims of fashion, but there’s little doubt the 2015 Evoque is a significant step forward. Finally, this British success story has the modern diesel engine it always deserved.

In terms of the new Ingenium unit, we have no complaints. It’s smooth, responsive and efficient. And (money-saving tip!) the 150hp version is plenty quick enough for most needs.

Unfortunately for the Evoque, Land Rover has now put the same engine into the Discovery Sport, which looks pretty similar, costs about the same and is vastly more practical.

The Evoque remains a sportier and more satisfying drive, but if we had upwards of £30k to spend on a new SUV, we’d opt for the more sensible Discovery Sport.