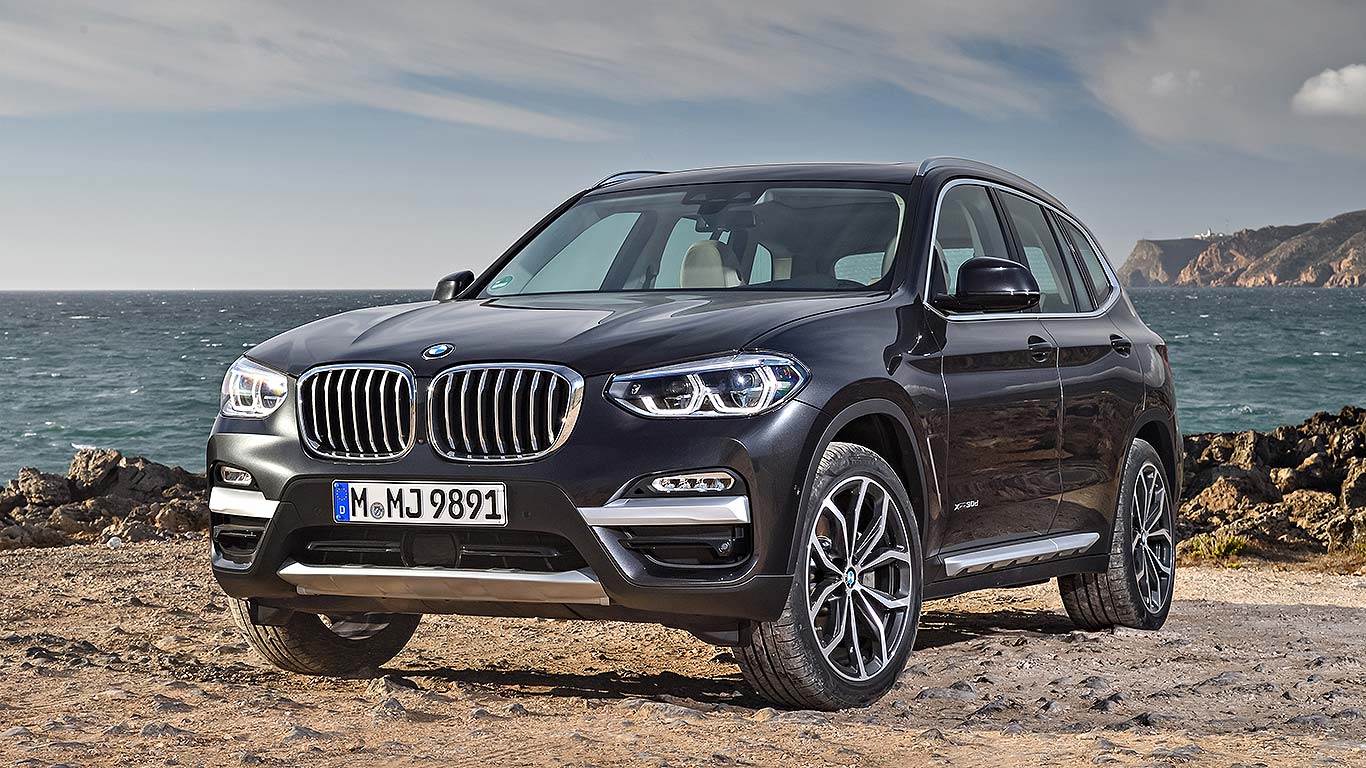 The BMW X3 is the popular premium compact SUV that, for a while now, has lacked the wow factor of its flashy rivals. The Land Rover Discovery Sport, Mercedes-Benz GLC, Audi Q5, Volvo XC60 – these are the cars that come to mind when your upmarket estate-owning friend says they too want an SUV instead.

But the X3 still sells, very well: BMW’s made 1.5 million of them since 2003. The original one was the first posh mid-size SUV to take on the then-archaic Land Rover Freelander, albeit one tainted by a curious initial lack of diesel engines and a ride quality more akin to a sports car – or a skateboard. The second one was a better all-rounder, but also lacked any sort of sparkle.

So, to make up for its somewhat dreary predecessor, here’s a far better-looking all-new X3, one finally as flashy as the latest Q5, as posh inside as an XC60 and as practical as a Discovery Sport. Is BMW now a front-of-mind premium compact SUV contender? The firm flew us to Portugal to find out.

BMW’s latest new designs are looking sharp. The X3 is no exception – but unlike, say, the BMW 5 Series, a step forward really was necessary here. The new X3 looks richer, more premium. It has more status than its predecessor, and should wow both current owners and also at last stir the interest of those lured by the Q5, GLC and XC60.

The front, with its jewel-like headlights (LED is standard), sculpted bumpers and massive kidney grille air intakes, has way more authority than before. The body sides are more curvaceous, so it looks less blocky and MPV-like, and the enlarged tail lamps really stand out (particularly when illuminated on the move). 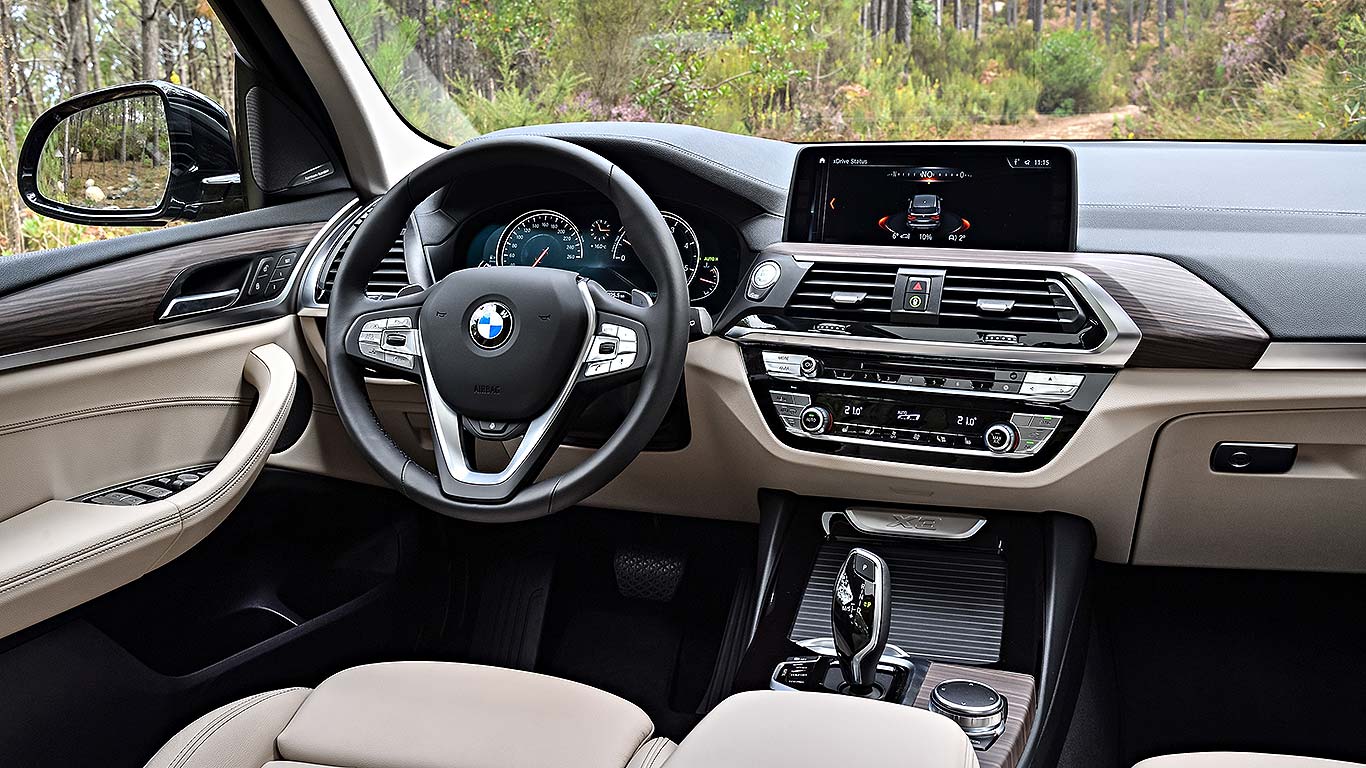 It’s a similar story inside. The old X3’s dashboard looked a bit like a spongy block of plastic with some instruments, heater dials and an infotainment screen pressed in. This new one is a massive stride forward, with all the elegant premium tactility that so impressed us in the new 5 Series. It’s less dense than before, with the slimline widescreen infotainment display standing proud, although base SE buyers will want to upgrade the paltry-looking standard 6.5-inch touchscreen to the fancier £680 10.3-inch Professional navigation system (it’s standard on range-topping M Sport).

The old X3 had just about enough space. BMW has therefore made this new one – built atop the firm’s new scalable architecture also seen in the new 5 Series – markedly bigger. It’s around 50mm longer and a fair bit wider, with a healthy 50mm stretch to the wheelbase. This means that, not only are the rear seats easier to step into, there’s a decent amount of legroom back there, with manually-reclining rear seatbacks to help make the most of the comfort.

The rear seat is wide, and should take three passengers without the middle one feeling too short-changed, plus you can make it nicer still with the £1,190 panoramic glass roof option. Generously, BMW includes rear climate control dials as standard back there (oh, and leather is standard on all X3). The seats naturally fold 60:40, to enhance the X3’s other big positive: a fantastic boot.

Stats say it’s 550 litres seats-up (as big as a large estate car), and 1,600 litres with them down. Those don’t reveal just how practical it is, though: the load space is very wide, very square and has a low, intrusion-free sill that makes it painless to slide heavy objects in. It’s extremely practical – and even folding the rear seats is simple, thanks to remote levers in the boot area.

Up-front, you sit high, like in all good SUVs, but the seats are supportive (it’s more ‘in’ than the ‘on’ of some rivals) and the sculpted steering wheel in our 30d test car was lovely to hold. Visibility is good, the view down the bulge-laden bonnet is cool and the general ambience is significantly more solid, tactile and, generally, better. This is genuine modern luxury, easily a match for a Q5 and XC60 (and acing the cheaper Discovery Sport).

Behind the wheel of the new BMW X3 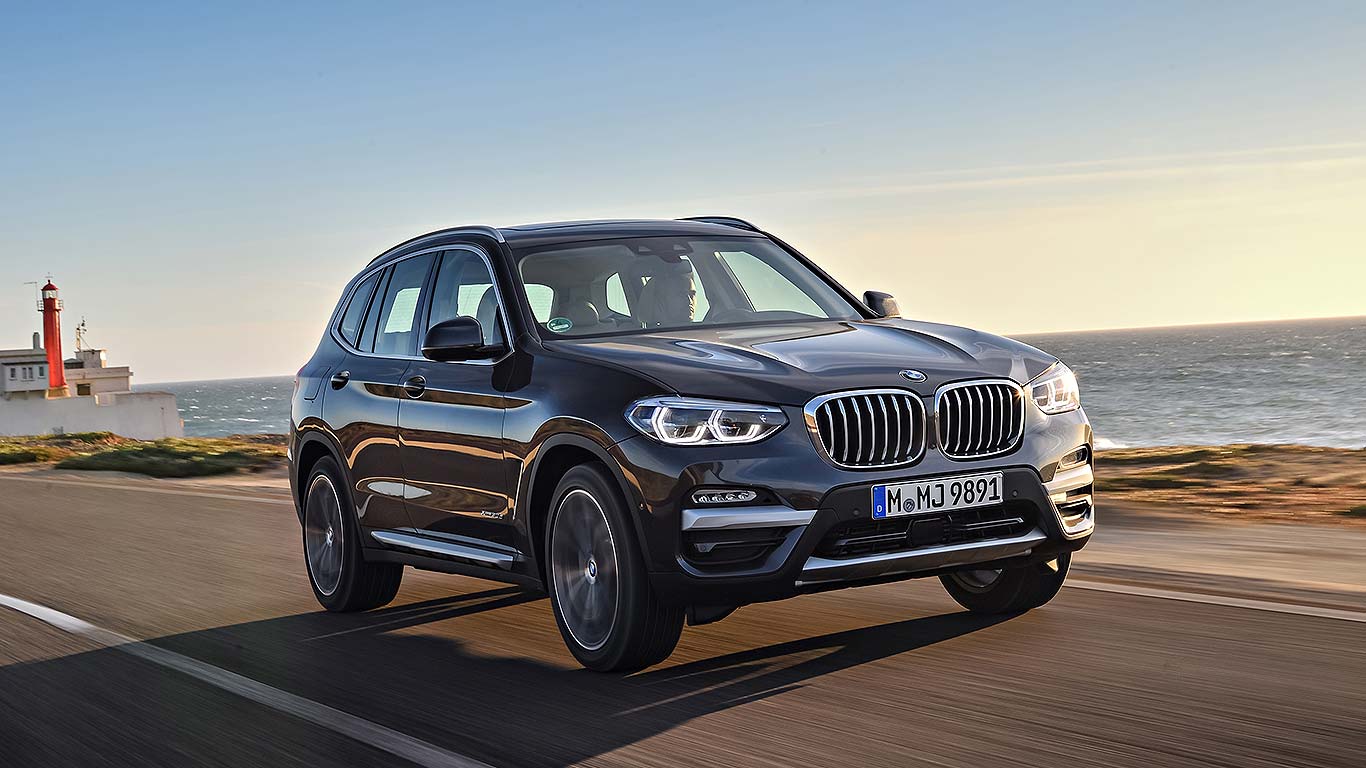 The first thing that you notice in the new X3 is how refined and smooth it feels on the move. The ride is extremely well isolated and absorbent, with plush cushioning and absorption of the road surface. It’s about as far removed from the concrete suspension of the original X3 as can be.

The test cars were fitted with Variable Damper Control (VDC) adaptive suspension, which helps, but it’s clear the fundamental excellence of the 5 Series has carried through here, too (thank BMW’s latest ‘Cluster Architecture’, or CLAR, for that). Suspension is also controlled and lurch-free when driving in the sporty way BMW likes to emphasise.

For the driver, firm accuracy and precision through the well-weighted steering help twisty-road confidence grow. It feels like a machine with lots of integrity, a tall SUV that is still able to do the things lower and more conventional cars manage so well. If you’re coming from a regular car, you’ll feel far fewer SUV compromises here than in some others, not least the Land Rover.

The 3.0-litre straight-six engine is of course, lovely. A power output of 265hp delivers 0-62mph in 5.8 seconds via the impeccable and standard eight-speed automatic gearbox. There’s more mid-range pull than before, enhancing its effortlessness, and even the trace of clatter – which shows this engine’s age in other applications – is toned down here. It’s £5,500 more than the 20d we’ve yet to drive, but 49.6mpg against 56.5mpg means the fuel economy penalty won’t be too severe.

We also got to drive the racy M40i: the first M Performance X3. This was a lot of fun, mainly because of its brilliant 340hp 3.0-litre straight-six petrol engine. It sounded good, drove with potency and felt suitably more sporting than the 30d, without going too far. It’s such an interesting proposition that we’re going to discuss it in a separate piece. Watch this space. 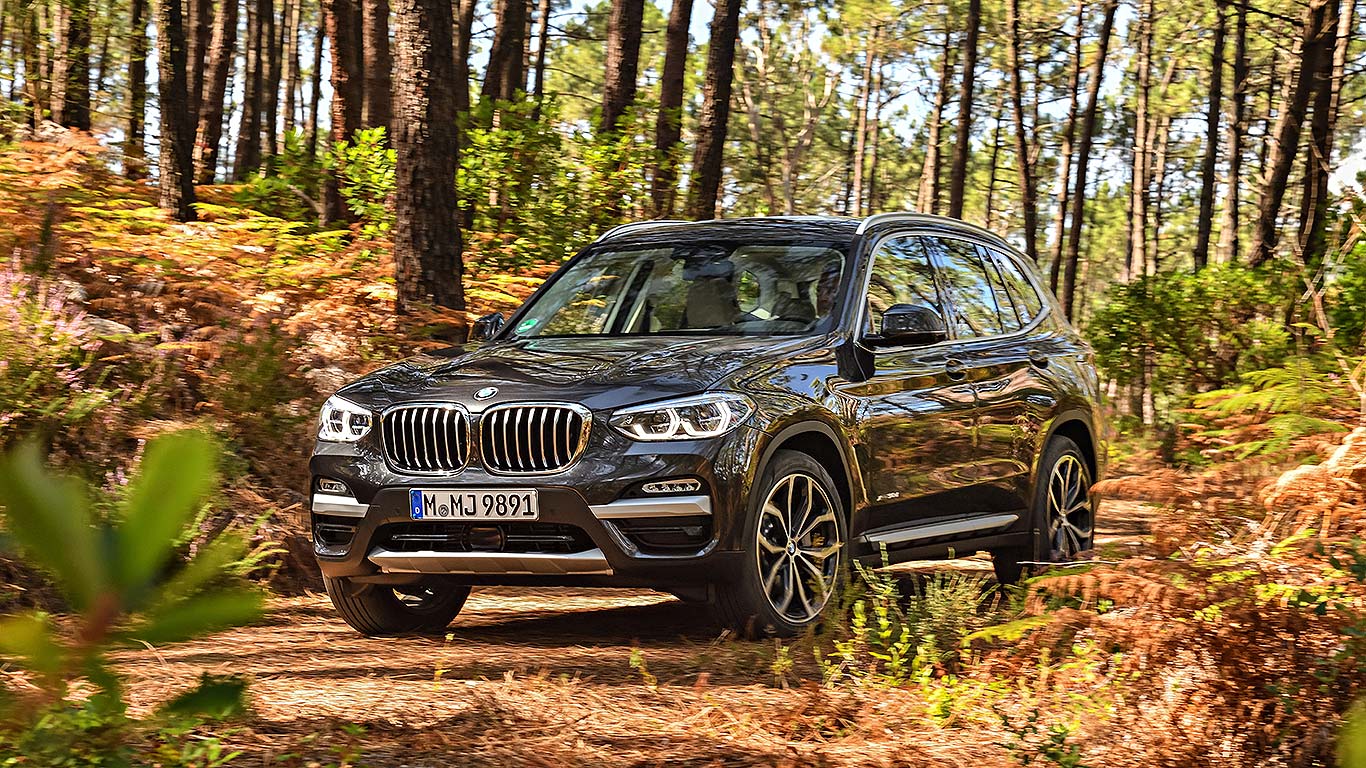 We also spent a lot of time driving the new X3 xDrive30d off-road. As mentioned, all cars came with VDC, a virtual £750 must-have option, but otherwise they were as standard as launch event cars can be, with no special off-road stuff – and tech such as Hill Decent Control included as standard.

Really, it wasn’t challenging by Land Rover standards, but the route was still way tougher than any sane owner concerned about body damage and scratched paint would ever contemplate. The approach and departure angles are generous, xDrive 4WD traction intelligently gets you out of the stickiest situations and, perhaps important for the UK’s increasingly headline-grabbing weather, it can wade half a metre of water in safety.

What was also impressive was how the X3’s on-road comfort carried through off-road. The ride was cushioned and took away the shock of rocks and rubble. Passengers weren’t jarred as the driver got carried away. The electronics were subtle and didn’t send frightening-sounding whirrs and whines through the structure. You’ll never drive it so, but you can take comfort in the fact it’s so pleasant if you do so.

New BMW X3 in the UK 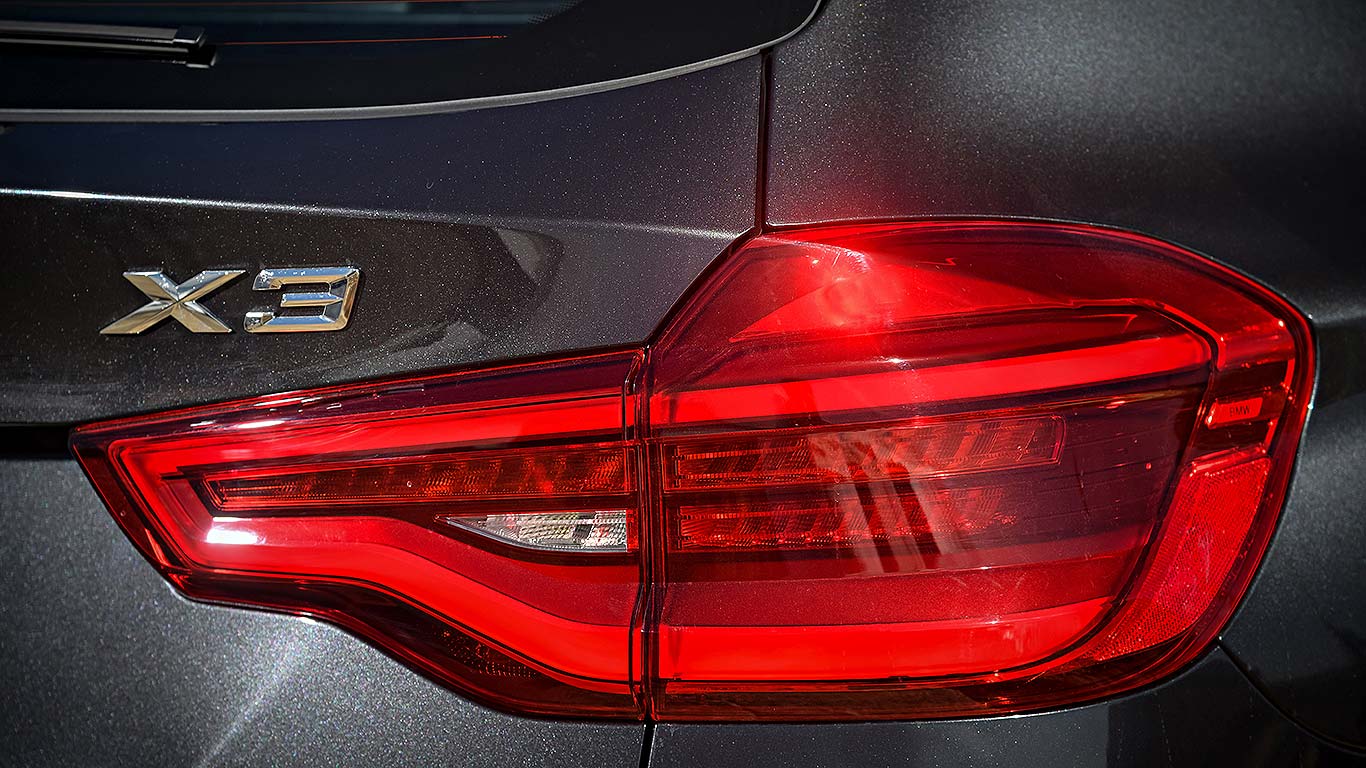 BMW says six in 10 new X3s will be sold as M Sport models, with bold 19-inch alloys, M-specific body styling and, inside, a lovely set of M Sport leather seats. The most popular engine by far will be the xDrive20d, with 80 percent of sales; the xDrive30d that we drove will take 15 percent of sales, leaving the M40i and upcoming xDrive20i petrols to fight over the remaining 5 percent.

All UK X3s will be all-wheel drive; trims sold here will comprise SE, xLine, M Sport and the M40i. BMW expects to sell 11,000 in its first full year, a healthy increase over the current car. 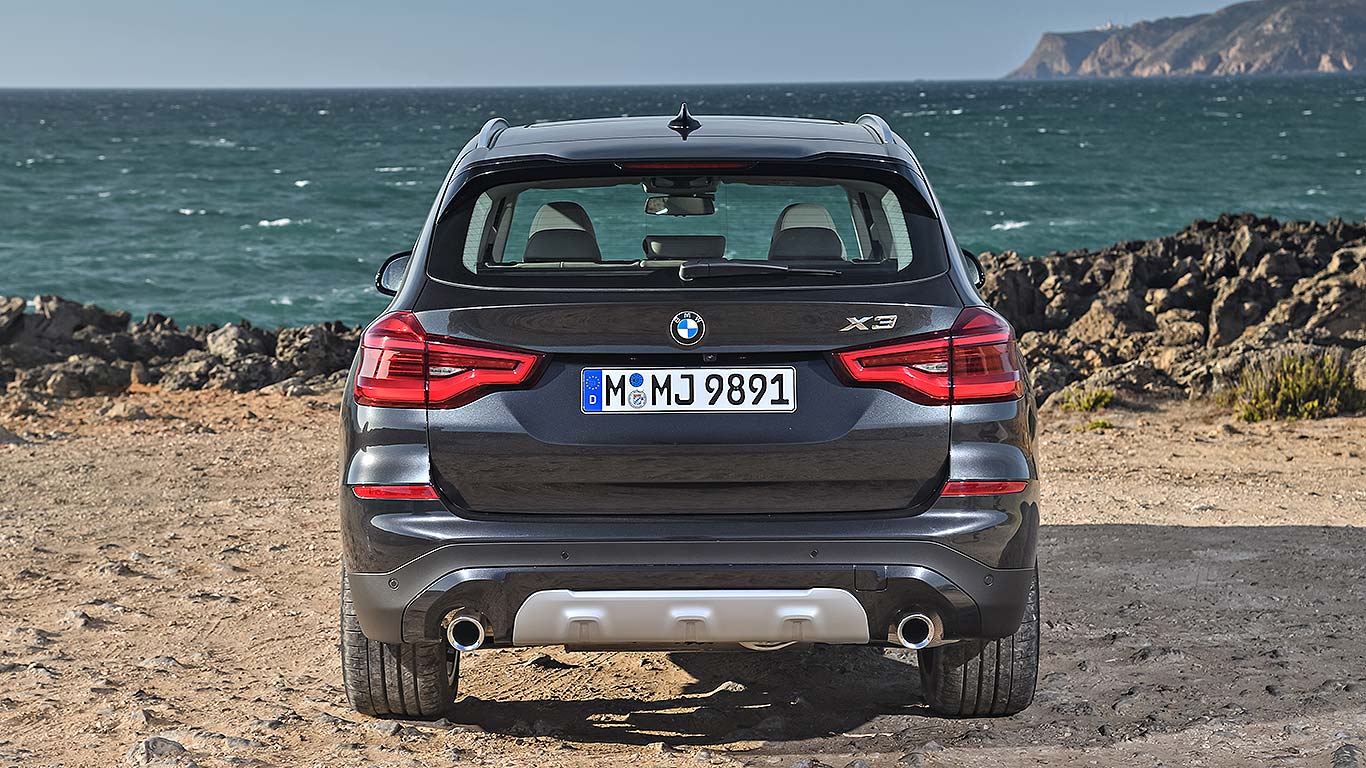 Again, BMW’s taken a worthy but not quite outstanding car, and made it significantly more appealing. The new X3 looks impressive, has a superb interior, offers plenty of five-seat practicality and drives nicely. The status that so many seek in this sector is there, along with the traditional BMW driving qualities to back it up.

It’s now finally a car that can go head-to-head with the Audi Q5 and Volvo XC60 in a premium SUV four-car face-off. This first drive hasn’t quite given us evidence it would win, but the X3 is now able to put up a genuine fight.