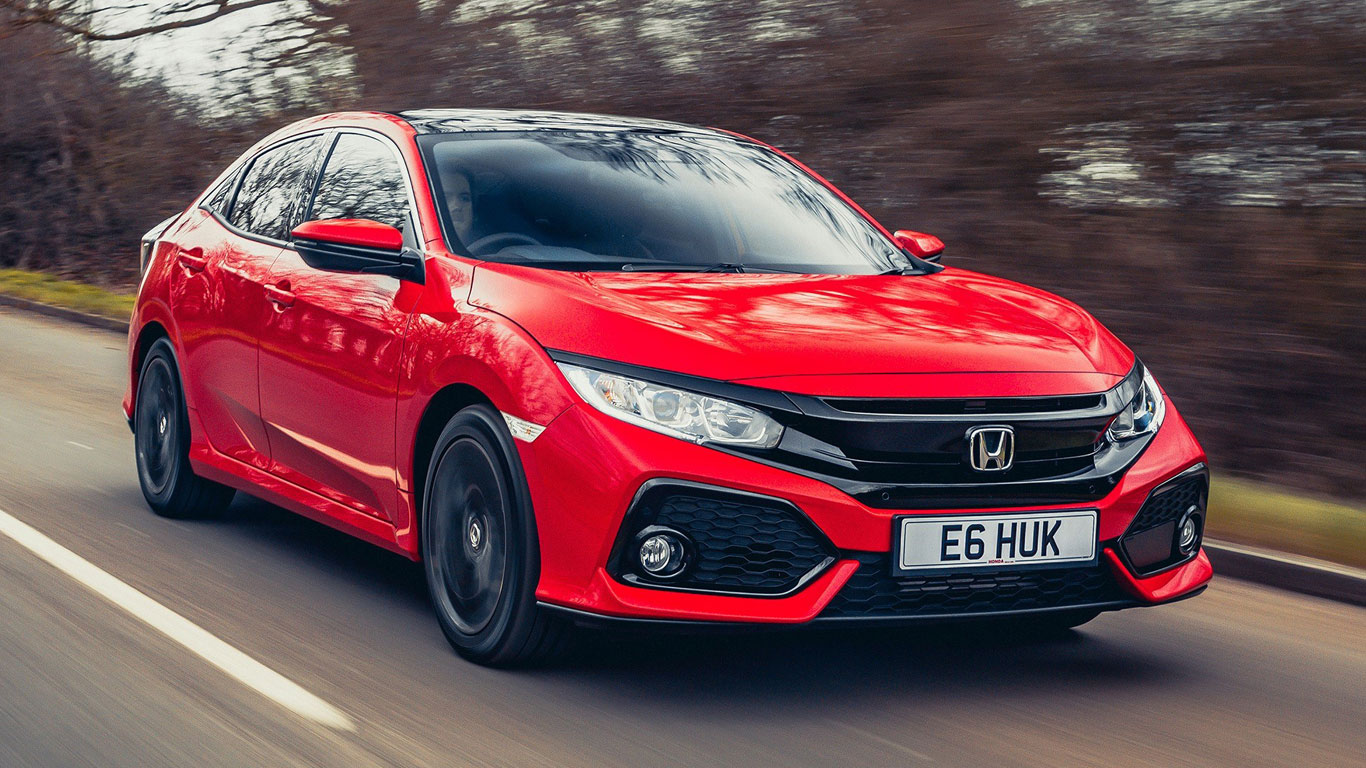 Is the Volkswagen Golf too ordinary for you? Perhaps the lure of Japanese reliability appeals, or maybe you like the unconventional styling of the new Honda Civic? There’s a myriad of reasons why you might consider a new Civic, which is why we’ve given it the full MR UK road test. Here, we’ll find out whether it’s worth parting with your cash for.

The model we’re trialling here is powered by the 182hp 1.5-litre petrol engine, paired with the CVT automatic transmission. Like all Civics (in the world…), it’s built at Honda UK’s Swindon factory and has a five-door hatchback body. That’s the only style you’ll be able to buy here: although other markets also get saloon and coupe variants, you can’t buy those in the UK. Honda has also confirmed that it’s axing the estate version – people would rather buy crossover SUVs than a mid-size estate, apparently. 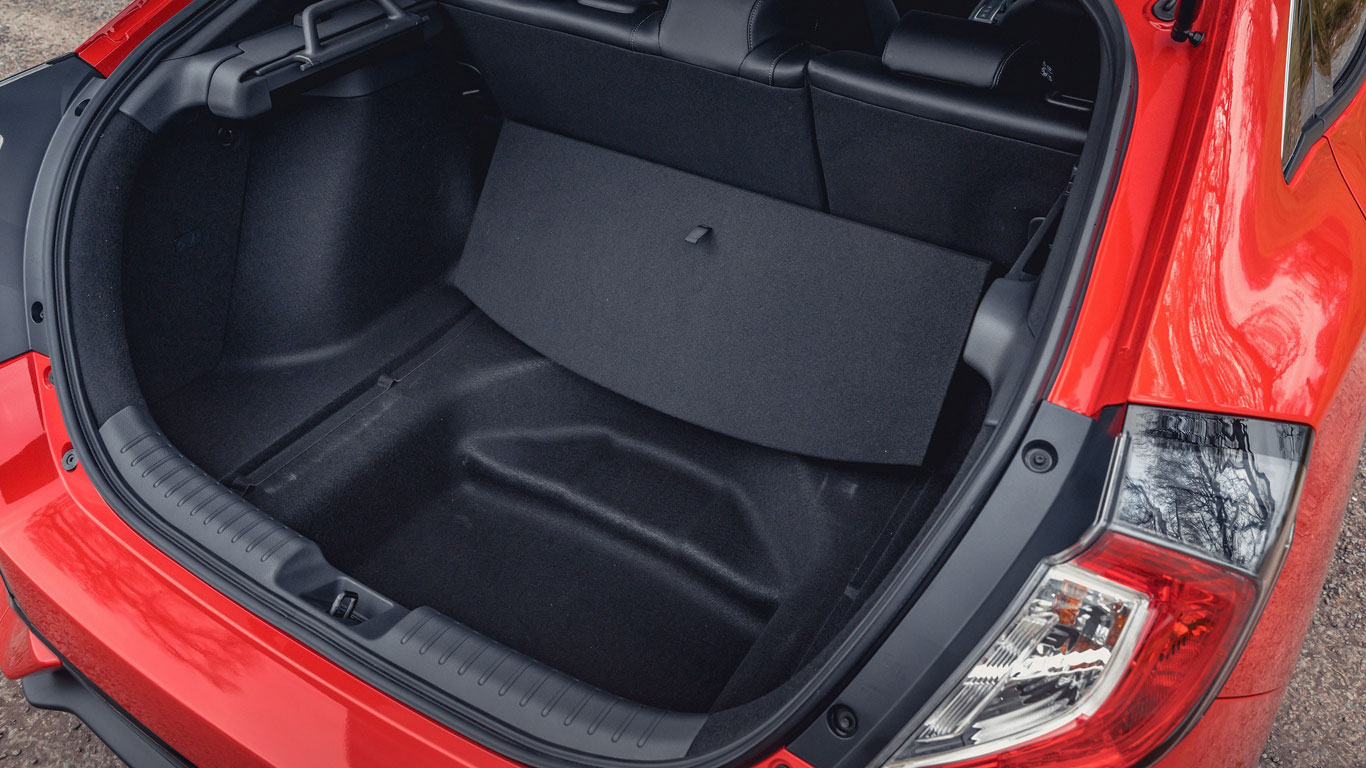 Owners of previous generation Civics might lament the loss of the so-called ‘Magic Seats’. By tucking the fuel tank under the front seats, engineers has cleverly designed rear seats that could fold in a number of ways – including flipping the bases up to fit large objects in the rear footwells. However, not enough people used them, so they’ve been scrapped.

That doesn’t mean the new Civic isn’t practical, though. There’s room for five inside, although adults in the rear might complain about the reduced headroom compared to the previous car. Legroom has been increased, thanks to the new, longer platform, and headroom in the front is improved on its predecessor. Isofix points are fitted in the rear, while families will also appreciate the easy-to-access boot. At 478 litres, this is marginally bigger than before, and offers more space than most rivals. A split floor also aids practicality.

Tell me about the interior

The inside of the Civic follows the same angular theme as the outside. That might not be to everyone’s taste – the Golf’s dash looks a lot smarter, in our opinion, but some would describe it as a bit dull compared to the Civic’s. At the centre of the dash in our Prestige-spec test car is a seven-inch infotainment system that works perfectly well, despite its graphics having a touch of ’90s game console’ about them.

It’s easy to get comfortable in the driver’s seat, with a low position adding to the car’s sporty feel. Adjustment of both the seat and steering wheel is easy, while the infotainment and controls for the air conditioning are easy to reach. 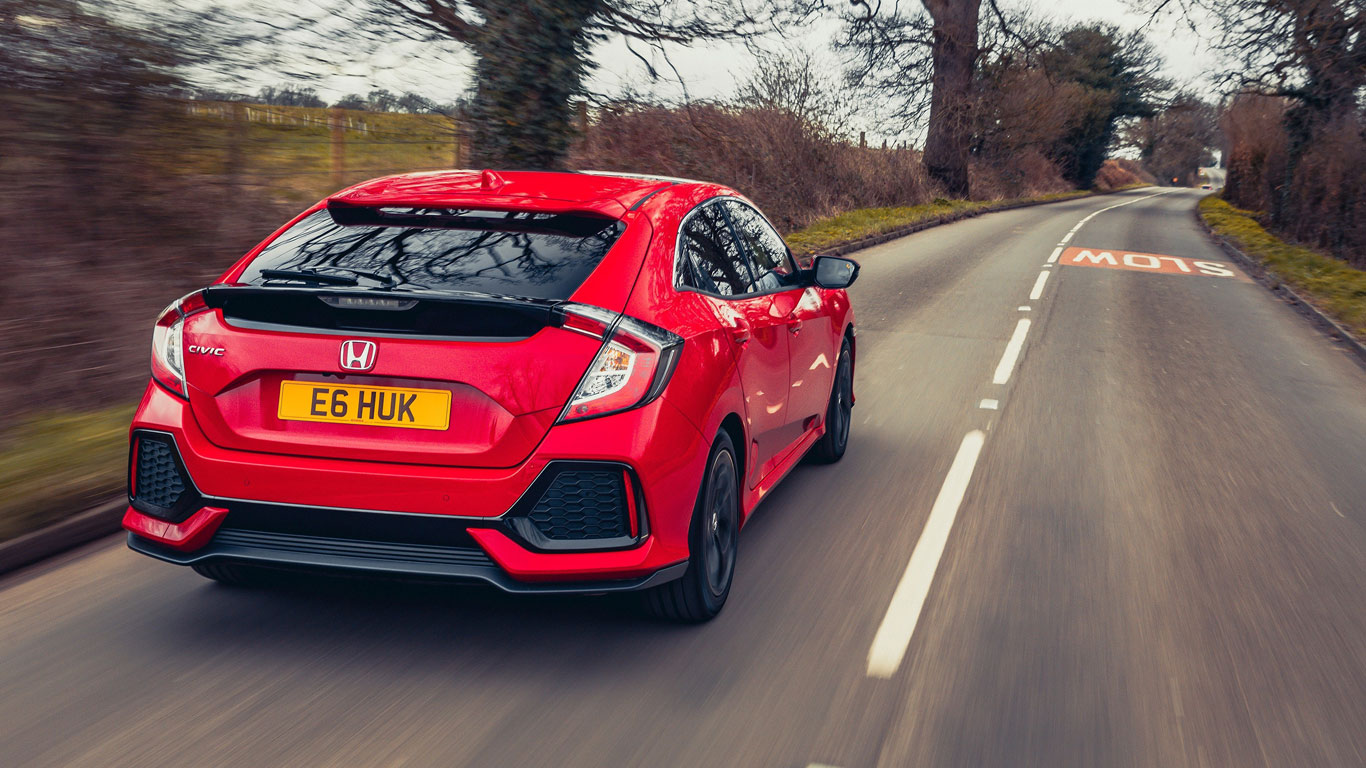 Honda traditionally sells cars to a more elderly clientele, but it’s hoping to attract a younger audience with its new Civic. Even this humble 1.5 has a touch of the Type R about it – there are fake grilles, swooping wheelarches and chunky 17-inch alloys. Being the upmarket Prestige, our test car does without sporting elements such as the twin central exhaust pipes.

Does the new Civic’s driving experience live up to its sporty appearance? Not exactly. While it passes through corners almost as well as a Ford Focus, its steering isn’t the most communicative. Body-roll is well contained, though, and it’s  nicely damped over broken road surfaces. When bimbling through town, the engine is extremely hushed – in fact, it almost feels electric car-like, such is the refinement. The CVT automatic gearbox adds to this.

Although the letters ‘CVT’ are normally enough to make us visibly shudder when talking about gearboxes, Honda has done a commendable job in making this gearbox seem, well, normal. If you want a touch of Type R, you can select Sport mode and use the paddle-shifters to change through seven simulated ‘gears’. It’s a bit pointless, really, as the Civic suits a more laid-back approach to driving.

How expensive is the new Civic? 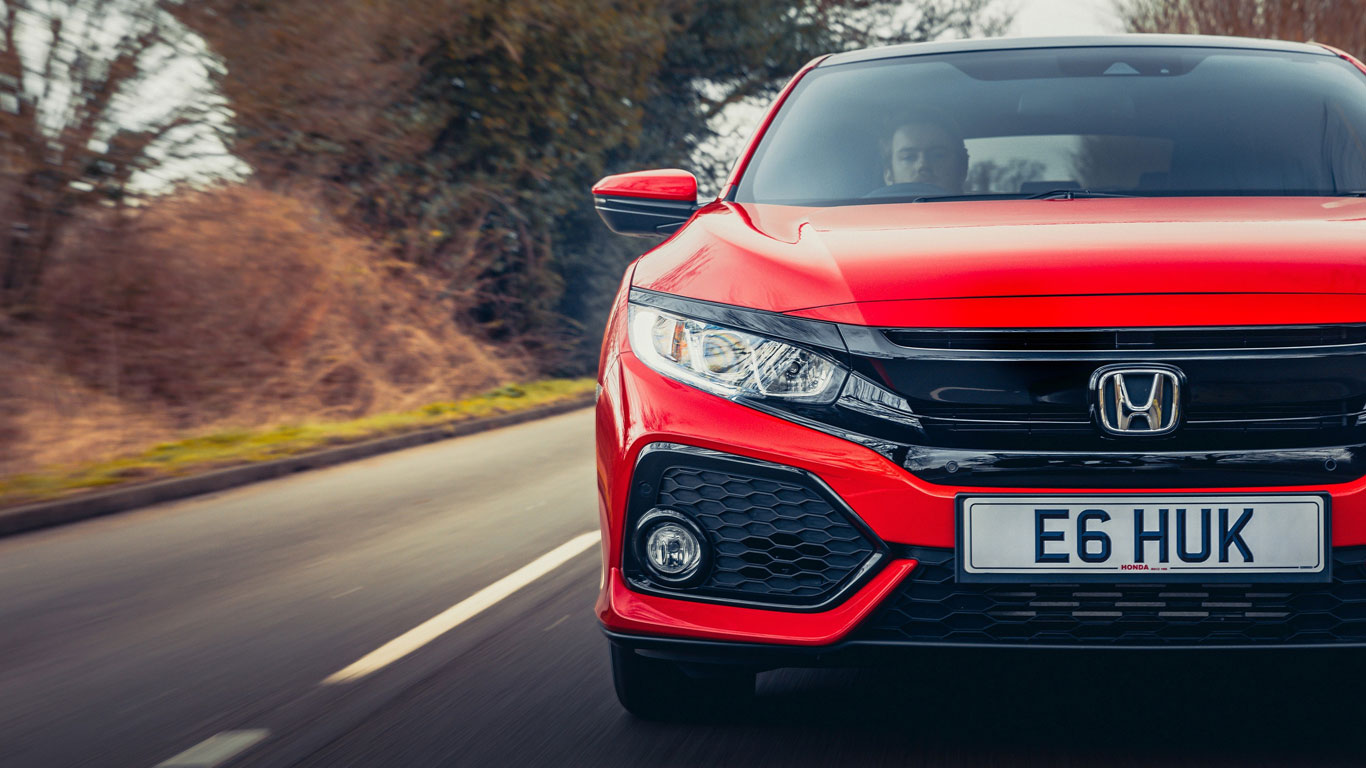 Starting at £18,475, it’s not a cheap car. That makes it more expensive than the Mazda 3, Renault Megane and Vauxhall Astra, while even the latest Volkswagen Golf undercuts it. It’s well equipped, though, with even the entry-level SE featuring DAB radio, air conditioning and front and rear parking sensors. Our top-spec Prestige (all £28,075 of it, including metallic paint) has heated leather seats and some extra chrome, as well as a sunroof, adaptive dampers and an upmarket audio system.

There are some tempting finance offers, which make the list price irrelevant for most. At the time of writing, Honda is offering a Civic 1.5 Prestige with the manual gearbox for £269 a month following a 30% deposit and a further £750 deposit contribution from the manufacturer. For the budget-conscious, an SE can be had for £189 per month over three years following a deposit of around £4,000. 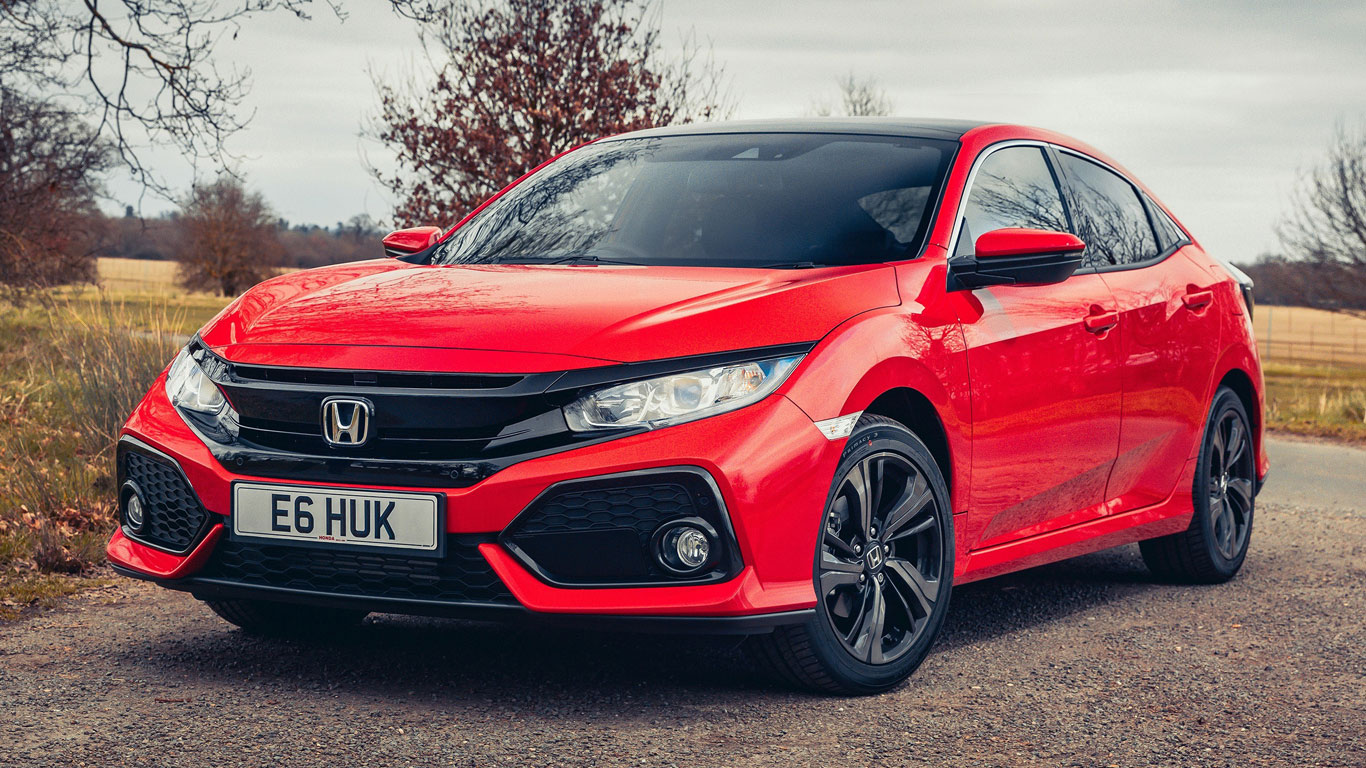 The latest Honda Civic will never be the default choice in the same way a Ford Focus or Volkswagen Golf is. You’ll love or hate its appearance (both inside and out), while its price makes it hard to justify over a Skoda Octavia or Vauxhall Astra.

If you can live with the looks and can afford the price (standard kit should help sway your decision), the Civic has a lot going for it. The driving experience is composed, if not sporty, while the interior is spacious and a bit different.