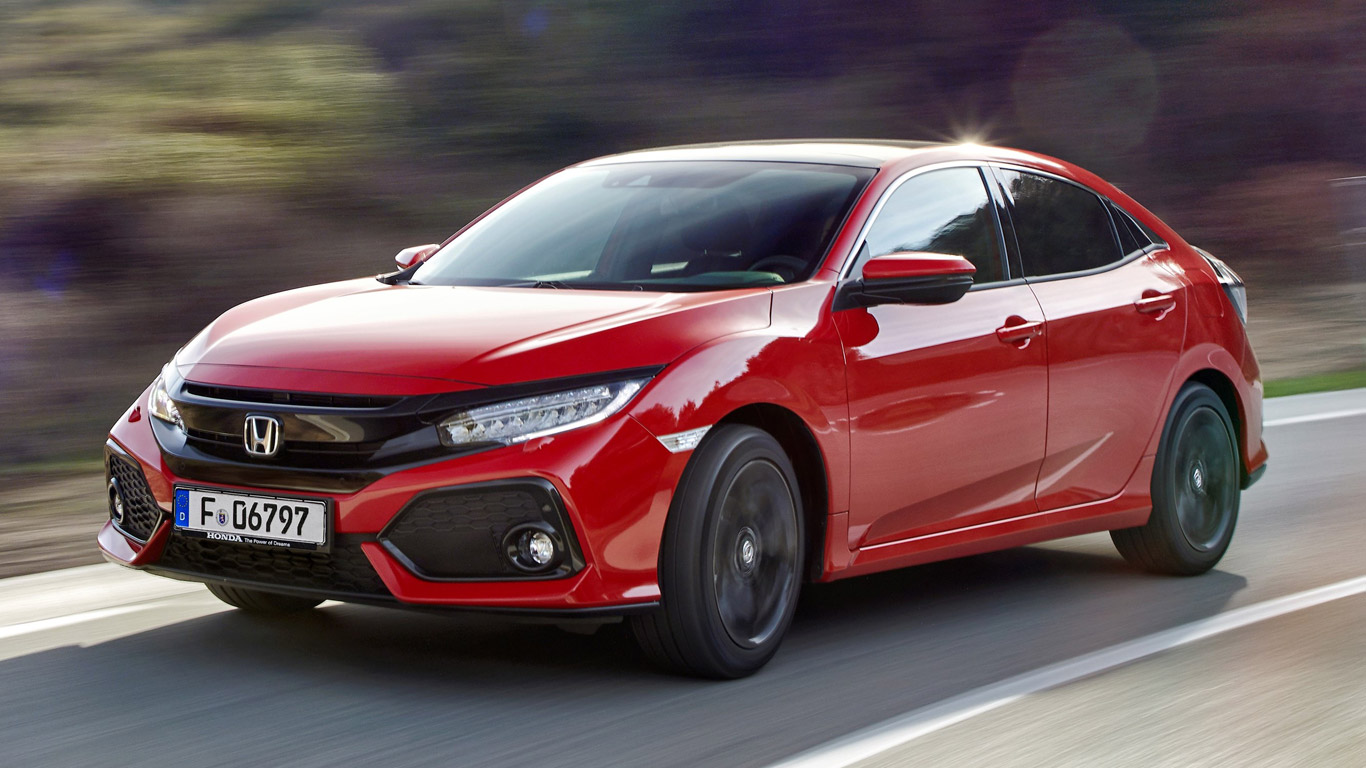 The Honda Civic. It’s the kind of car that people return to their friendly local Honda dealer time and again to buy, as they rate its reliability and it looks a bit different to a Golf. Although it’s never been a huge seller in the UK (in Golf or Focus terms), it’s worked well for Honda. But the Civic is getting bold for its 10th generation.

Gone is the ninth-generation Honda Civic and everything it stood for. Replacing it, the new Civic is an entirely new car on an entirely new platform, and with a range of new engines. Built in Swindon (the firm’s UK plant is the only maker of five-door Civics), this will be global car, tweaked for various nations.

It gets quirkier looks, sportier handling and more customisation options. But is that enough to tempt buyers away from other manufacturers? Let’s find out…

Tell me about the engines 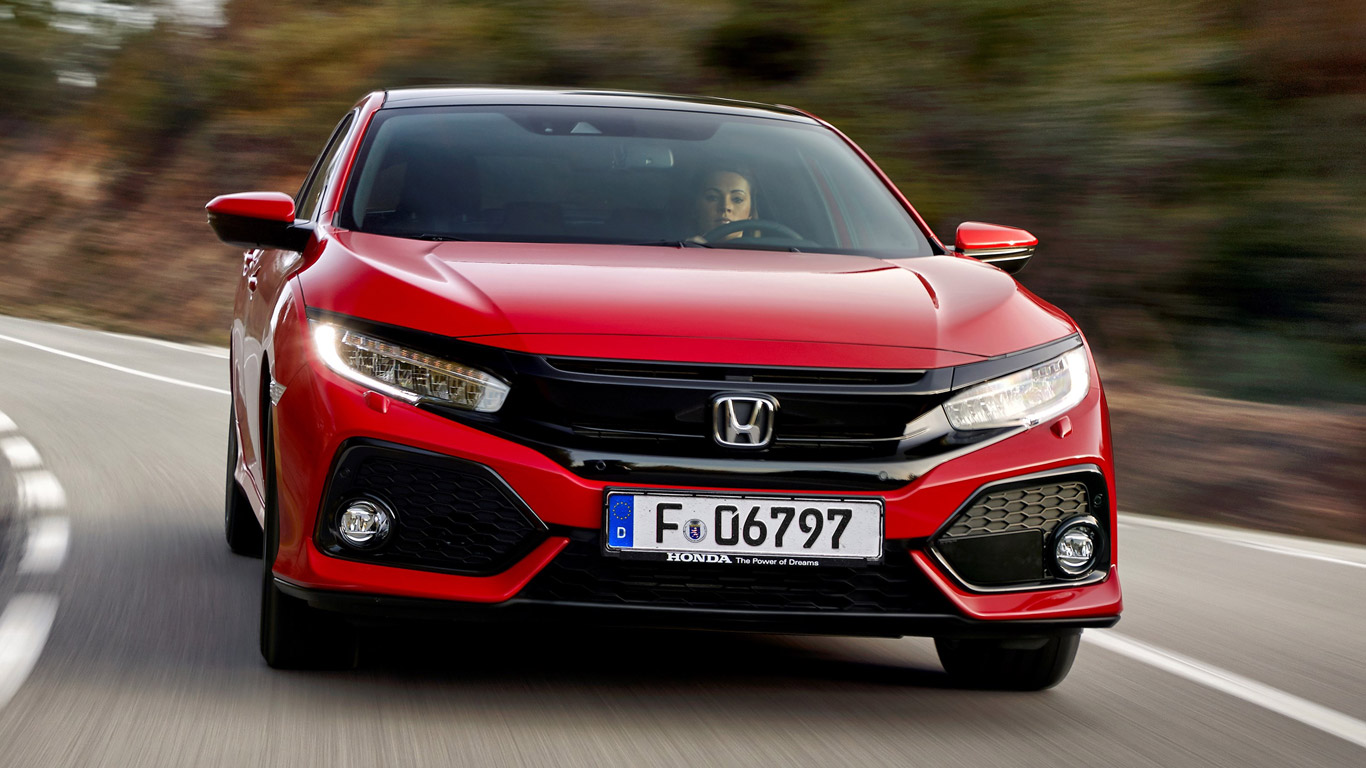 From launch, there’s a choice of two petrol engines. There’s the 1.0-litre three-pot producing 129hp, and a four-cylinder 1.5 with an output of 182hp. Without a diesel on offer to start with (it’s on its way), the smaller engine is expected to make up the majority of sales. While we’d probably opt for the 1.5 if money wasn’t a consideration, the entry-level 1.0-litre is a likeable engine. It’s vocal in a typical three-pot way around town, but settles down nicely when cruising.

Both engines are available with a six-speed manual gearbox or CVT auto.

Well, yes, a bit. But because we hate CVT ’boxes in Europe, Honda’s fiddled the software to make it feel like a conventional seven-speed auto. No, it’s not brilliant, and if you floor it, it will make that horrible droning noise we associate with CVTs. But it’s better than CVT gearboxes used in rivals such as the Toyota Auris, and we could probably live with it for day-to-day around-town driving. That’s quite a compliment for a CVT.

The manual, however, is lovely. Honda knows how to do a slick six-speed gearbox. If you’re one of the pre-geriatric types that the new Civic is hoping to attract, the manual is absolutely the one to go for.

Does that mean it’s a driver’s car, then? 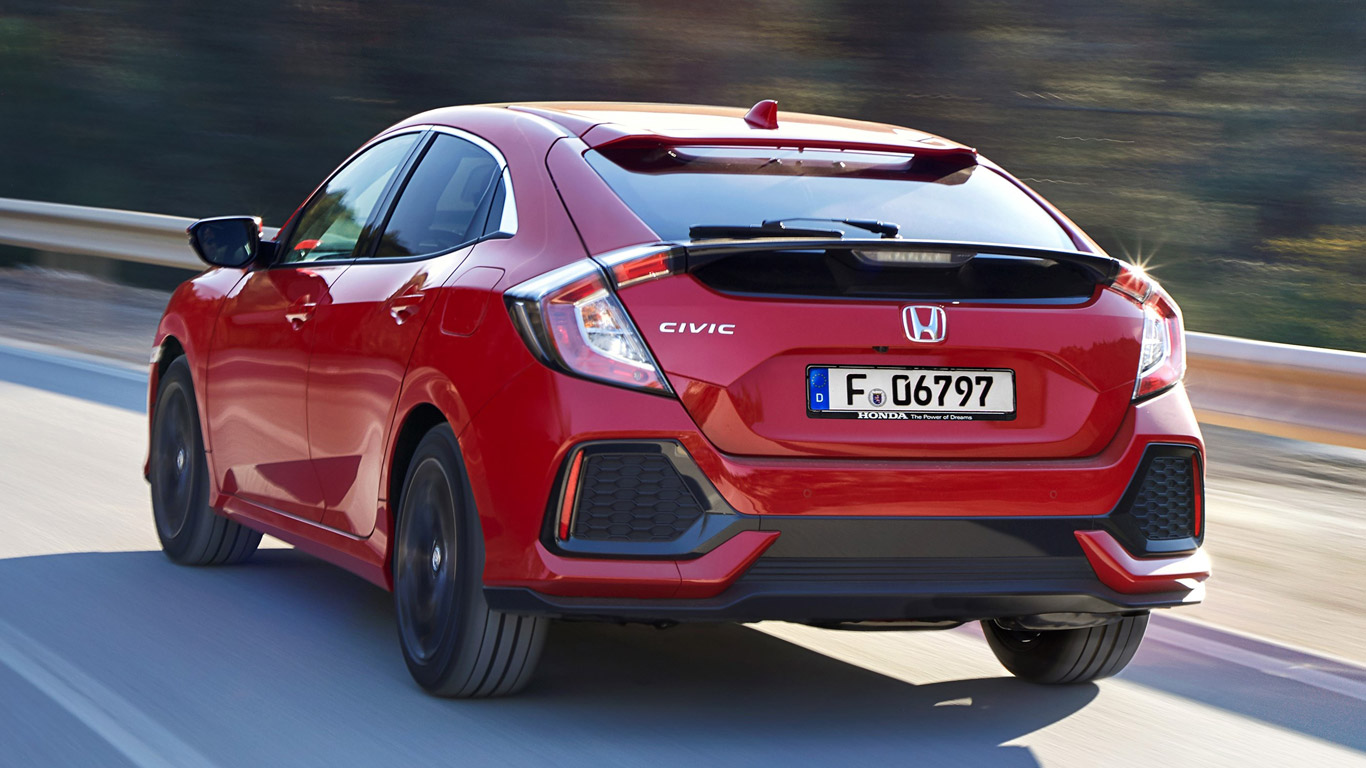 It doesn’t do a bad impression of a proper driver’s car. Its steering is light but direct, while the chassis isn’t out of its depth on twistier roads. A lot of this change comes downs to the new Civic’s fully independent suspension system with a multi-link set-up at the rear replacing the outgoing model’s twist-beam suspension. It gives us hope that the Type R version is going to be uber-impressive…

Yes, it’s confirmed, we’re getting the new Civic Type R from summer 2017. It’ll look a lot like the prototype revealed at Paris, with 20-inch alloys and the huge wing, scoops and vents that Type R buyers love. Power is likely to come from the same turbocharged 2.0-litre engine as its short-run predecessor, but expect it to be even quicker. And yes, it’ll be going in for the Nurburgring lap record again.

I don’t care about that – is the Civic comfortable?

Anyway, back to the regular 2017 Honda Civic. Even with 17-inch alloys fitted as standard to the higher-end models, the ride remains relatively composed, with drivers able to flick the adaptive dampers between normal and dynamic modes. Honestly? We couldn’t tell much of a difference on the smooth Spanish roads where we tested the new Civic.

Finding a comfortable driving position is easy, with more room inside than before. Boasting 478 litres of boot space, it’s one of the most practical cars in its class. Our only criticism here is the sloping roofline, which eats into headroom in the rear. 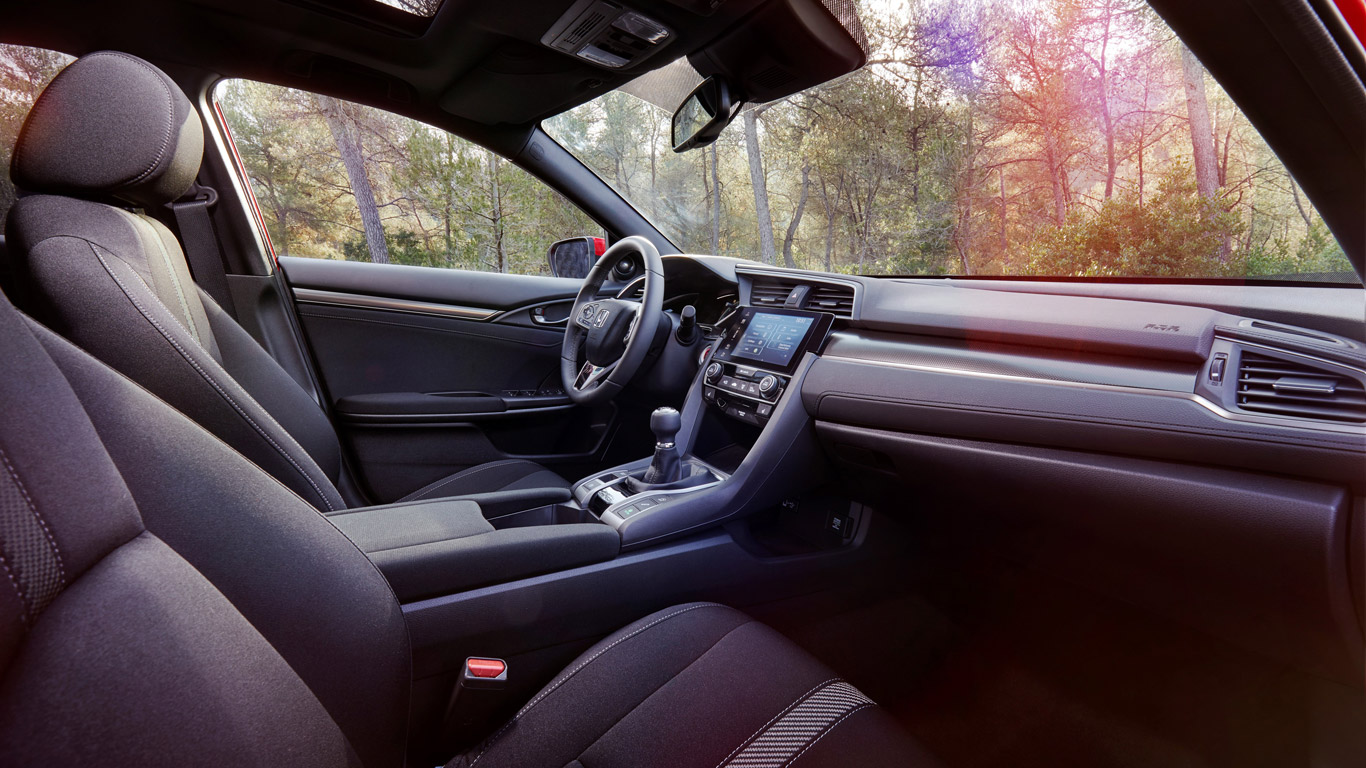 Yes, that would be the interior. It’s not that it’s bad, but you can tell Honda’s cash has been spent on engineering, rather than finessing the cabin. Buttons are all in fairly logical places, while the seven-inch infotainment system does the job with minimal fuss. It’s just not a Golf in terms of perceived quality.

Tell me about efficiency

The outgoing Civic had a reputation for being ultra-efficient, especially when paired with its 1.6-litre turbodiesel engine. Expect the same when a diesel arrives in the new Civic later this year, but the petrol models still offer some impressive stats. The 1.0-litre returns 60.1mpg on the combined cycle; the 1.5, 48.7. CO2 emissions are as low as 106g/km for an S- or SE-spec 1.0-litre paired with the CVT gearbox.

How does it compare to rivals?

Despite buyers flocking towards crossovers rather than conventional hatchbacks, it’s still a tough segment to crack. The Volkswagen Golf feels more upmarket than the Civic – and is only marginally more expensive like-for-like – while the Mazda 3 pips the Civic for driver enjoyment. There’s the latest Astra, too, which is one of the best in the class, while the trusty old Ford Focus offers a more conservative image.

We need to talk about the Civic’s design 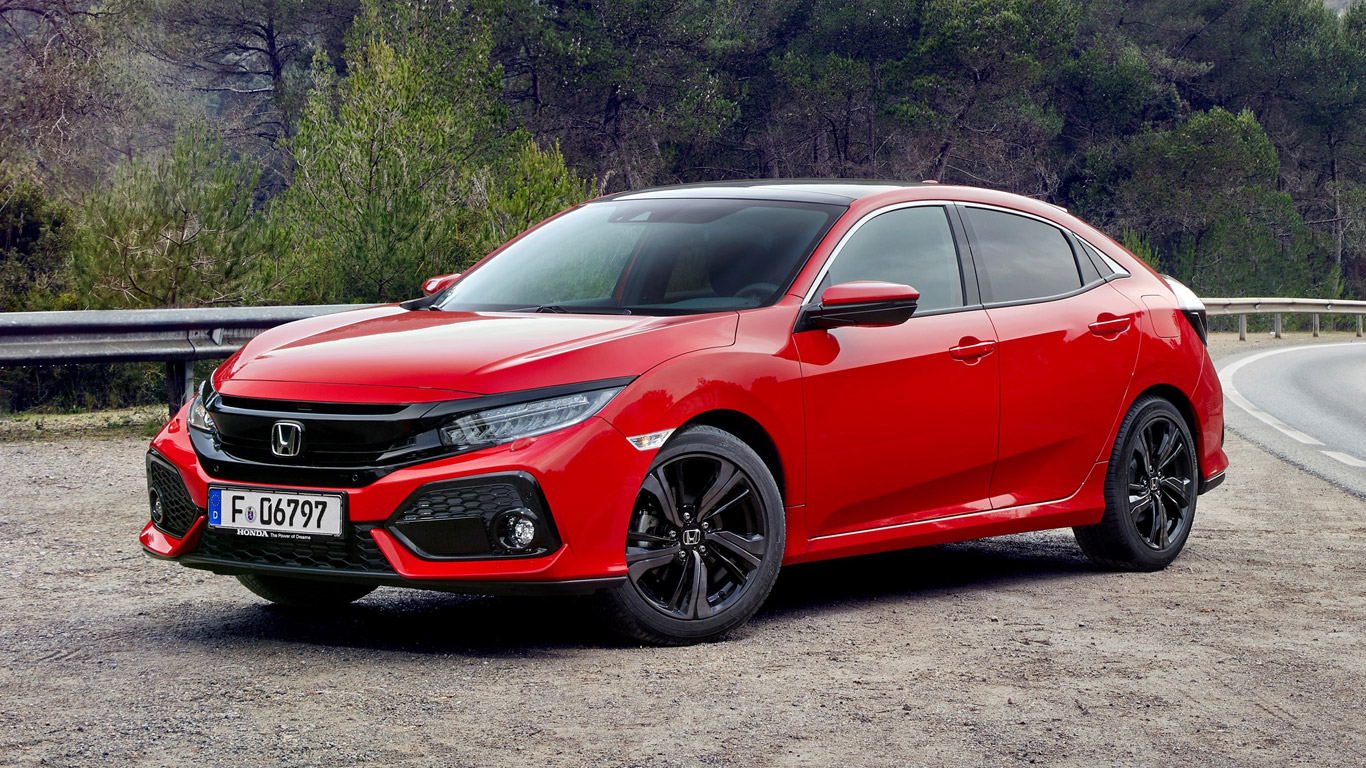 Ah, yes, that conservative image offered by the Focus. Honda definitely isn’t going down that route for the new Civic. It’s lower, wider and longer than the previous model, giving it the kind of aggressive stance that buyers apparently love.

You can look at the pictures and decide whether it works for you. We will say, however, that there are so many angles on offer, you might eventually find one that complements the Civic. It looks better in dark colours.

Which one should I buy?

If you’re not a Type R type, the best of the range at the moment is the 1.5-litre manual. But, in truth, most buyers will opt for the 1.0-litre and that’s OK. It’s a little bit thrummy and, especially when combined with the CVT ’box, it’s not exactly a motorway cruiser, but it’s fine most of the time. We’d like a little bit less vibration through the seats, though, and the 1.5 does offer a higher degree of refinement.

The new Civic is leagues ahead of its predecessor. Starting entirely afresh is a bold move, but it’s one that’s paid off for Honda – with the new model being much better to drive and easier to justify against rivals such as the Skoda Octavia, Vauxhall Astra, Ford Focus and Volkswagen Golf. The interior falls slightly short, and its design won’t appeal to everyone, but it’s a better car than ever before. And, as a bonus, you’ll be buying British.