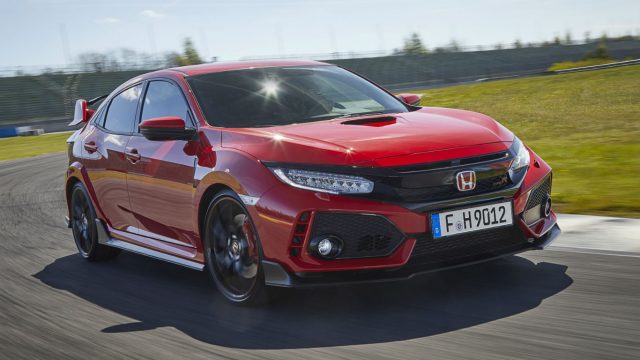 The line between road and track has always been blurred. Many of the first sports cars were little more than racers with number plates, designed to ‘win on Sunday, sell on Monday’. Later, we saw the emergence of homologation specials: limited-edition cars with competition kudos such as the E30 BMW M3 and Lancia Delta Integrale.

Now, we bear witness to a new phenomenon: road cars honed for the racetrack. These earn their bragging rights from lap times – specifically, Nürburgring lap times – rather than podium places. Which brings us to the 2017 Honda Civic Type R, the new king of the ’Ring. 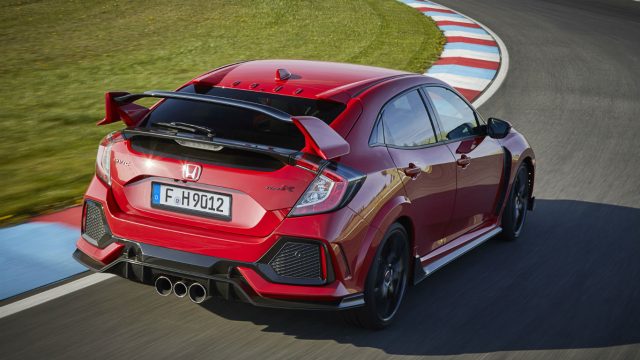 Talk of Nordschleife-baiting generally has the same effect on me as watching James Corden: I glaze over and quickly lose the will to live. But bear with me because serious Honda engineers insist this is important. The latest ‘FK8’ Civic has lapped the 14.2-mile circuit in 7min 43.8sec, which makes it a full seven seconds quicker than the outgoing ‘FK2’ and (cue fanfare) the fastest front-wheel-drive car ever – stealing the crown from the Golf GTI Clubsport S. 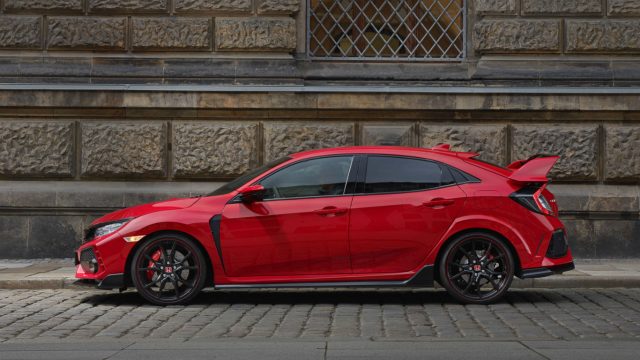 Arriving in Dresden, I nab the keys to a Rallye Red Type R (the other colours are Brilliant Sporty Blue, Championship White and Sonic Grey). Our destination is the Lausitzring, a former Champ Car circuit near the border with Poland. And Honda’s PR man casually mentions there’s some derestricted Autobahn en route. Happy days.

Before attempting to VMax a Civic in the name of consumer research, though, there’s something that needs to be addressed: how this car looks. If I was being kind, I’d say it was divisive. Somewhat… Marmite. But I’ve yet to meet anyone – well, apart from my six-year-old son – who likes the styling. Even the JDM fanboys aren’t convinced.

But hold on, because those splitters, skirts and spoilers, along with the flat underbody and diffuser, aren’t simply there for effect. The Type R is the only car in its class to generate positive downforce, meaning it’s sucked to the road at speed. Even the triple tailpipes serve an added purpose: the smaller middle one creates back pressure to reduce boominess and enhance high-rev flow. 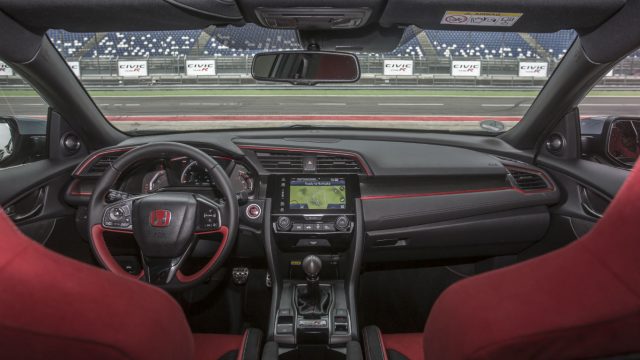 It’s just as in-yer-face inside, too. Scarlet bucket seats and an alloy gearknob are Type R trademarks, but the haphazard ergonomics and dated media system are standard Civic fare. The 50mm-lower driving position is welcome but, stating the obvious, it ain’t no Golf in here.

Such concerns fade into the background as I prod the pulsing red starter button and the turbocharged four-pot erupts into life. It sounds subtle – refined, even – the lack of aural drama seemingly at odds with the maximum-attack styling. But as I’ll discover, the Type R is a car of contrasts.

Power to the people 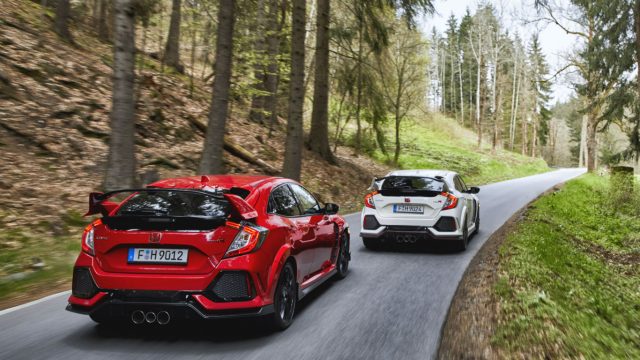 The FK8’s engine is a reworked version of the old 2.0-litre unit, with VTEC variable valve timing and a single-scroll turbo. Peak power is 320hp – a 10hp increase, largely due to that racier exhaust – and 295lb ft of torque between 2500 and 4500rpm. Drive goes to the front wheels via a six-speed manual gearbox (there’s no auto option) and a mechanical limited-slip differential.

On-paper stats are impressive: 0-62mph in 5.7 seconds and a top speed of 169mph. Plus, there’s that lap time, of course. But none of that really matters if the uber-Civic isn’t fun to drive. Luckily, it is.

Leading from the front 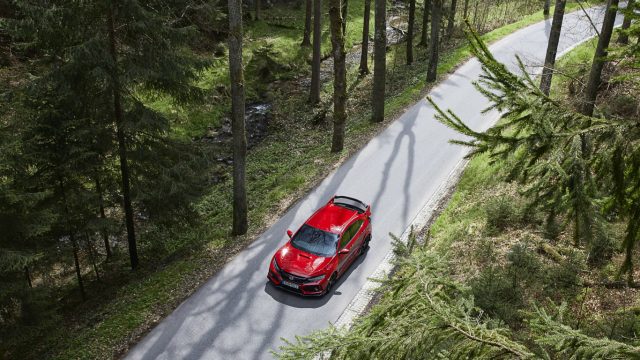 On the quiet B-roads of Brandenburg the Type R feels riotously, addictively fast. Very few cars are quicker cross-country, particularly for a driver who’d feel circumspect about pushing a supercar to its limits. There’s some turbo lag low down, but above 3,500rpm the Honda positively explodes, a frenzied rush that barely affords time to grab the next gear.

There are three drive modes: Comfort, Sport and R+. Default Sport works best on roads like these, settling the car into a fast flow that’s far from the scrappy, point-and-squirt experience you might expect from a 320hp front-driver. The secret is in the suspension: dual-axis struts at the front quell torque steer, while a multi-link rear set-up (in place of the old torsion beam) delivers better body control.

Track to the future 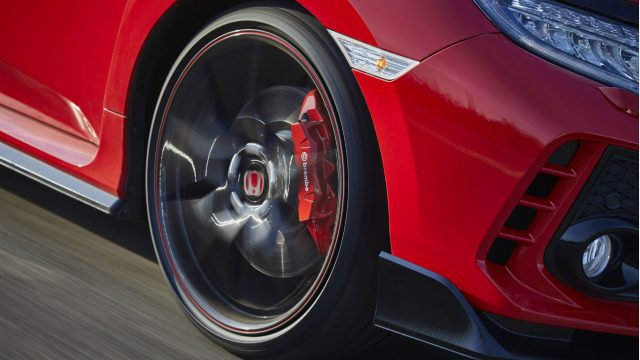 If the Honda is a blast on challenging roads, it’s a weapon on-track. Switch to R+ mode and the engine, dampers and steering all neck a shot of Red Bull; the whole car immediately feels more alert. And it simply grips and goes, the combination of front diff, inside-wheel braking and sticky Continental Sport Contact 6 tyres make it bite into corners like a ravenous rottweiler.

Completely overcook it and the Type R will run wide into tyre-scrubbing understeer; it doesn’t have the delicious, tail-out attitude of the four-wheel-drive Focus RS (nor indeed its hooligan Drift Mode). Nonetheless, as a family-sized car that doubles as a track-day toy, it takes some beating. From its intuitive variable-ratio steering to its confidence-inspiring Brembo brakes, this is a thoroughly sorted driving machine.

Jack of all trades 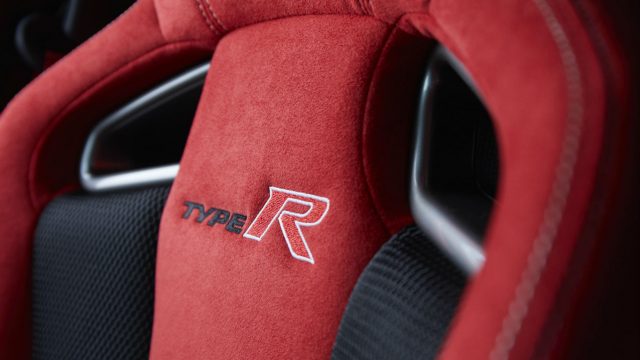 The Lausitzring isn’t quite the Nürburgring, but I emerge from the Type R feeling unjustifiably heroic. It’s that sort of car: one that flatters your driving ability, forgives your mistakes and makes going fast seem easy.

But let’s not forget the Type R is also a hot hatch, and that’s where the ‘family’ stuff comes in. This is one of the most practical cars in its class, with space for four adults and a large 420-litre boot. All it lacks are the workaday Civic’s flip-up ‘Magic Seats’ – a casualty of moving the fuel tank rearwards in order to lower the driving position. 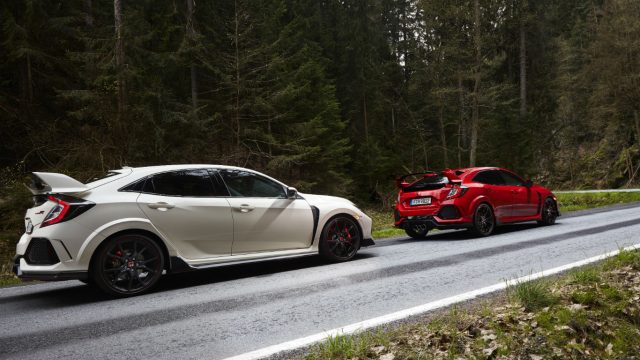 Ironically, it’s on the drive back to the airport, tired and in need of a coffee, that I really bond with the car for the first time. Yes, we briefly see the far side of 150mph on the Autobahn. And yes, all that positive downforce makes it feel rock-solid at speed. But what really impresses me is how easy the Honda is to drive.

Herein lies the biggest difference between FK2 and FK8. Whereas the old Type R felt permanently ‘on it’, the new model is a veritable Jekyll and Hyde. Switch to Comfort mode and it’s smooth-riding, quiet and surprisingly relaxing to drive. So… the perfect all-rounder, then? 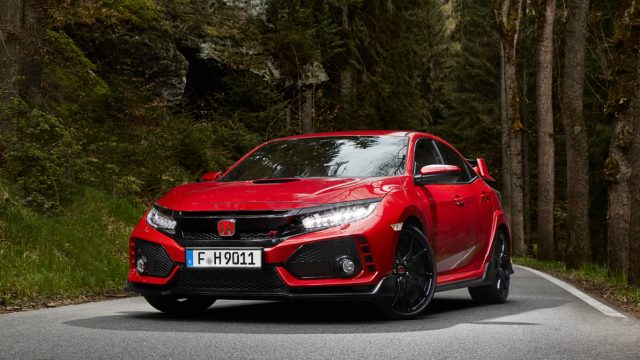 Well, not quite. The 2017 Type R is an impressive car, no question. Honda has filed off the rough edges without compromising handling or performance – quite the opposite, in fact. If you’re in the market for a 300bhp+ hot hatch, it should certainly be on your shortlist. But it isn’t the car I’d choose.

For me, the styling – however functional – is simply too extrovert. Too ‘McDonald’s car park’. But more importantly, I still believe the Golf R is a better car overall. And the Focus RS? That’s still more fun. So it’s a solid four stars for the Civic. Close, but no cigar.