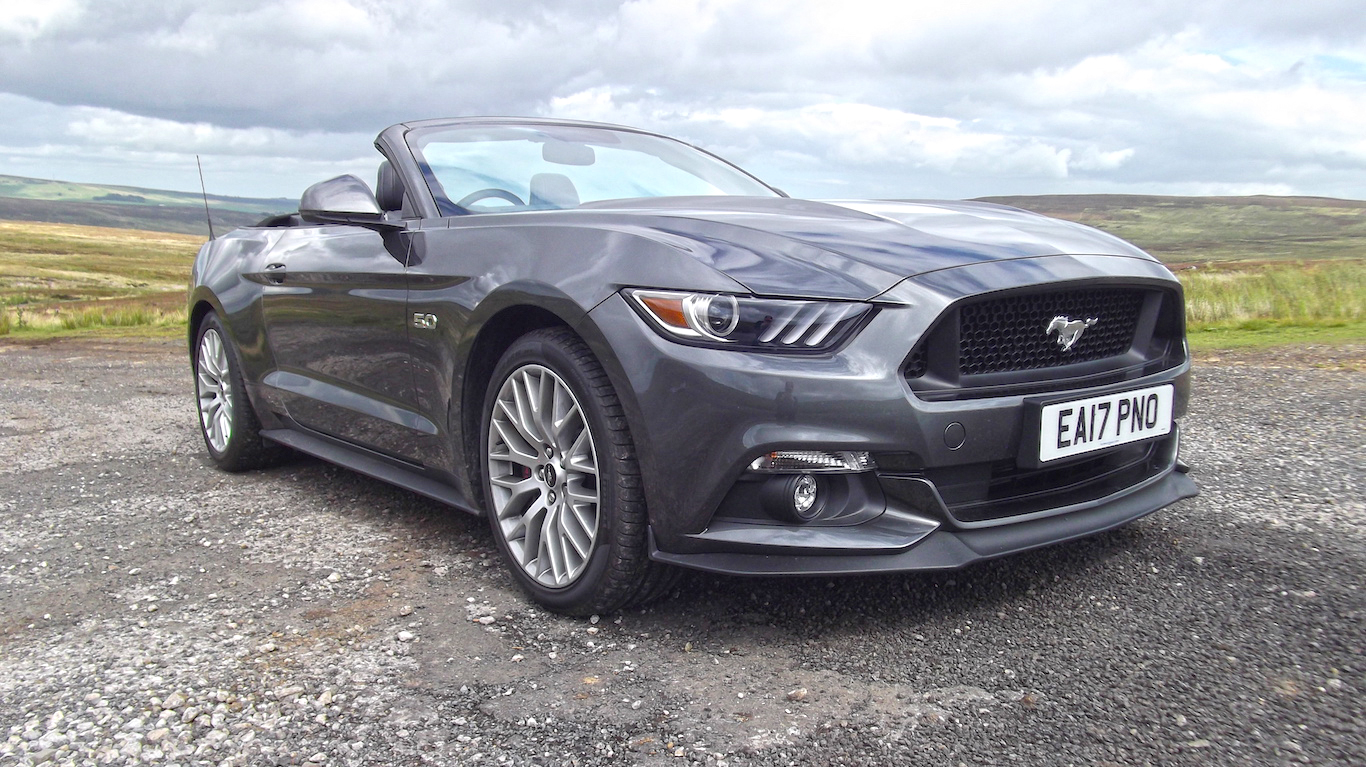 With the news that the sale of petrol and diesel cars could be banned by 2040, what better time to experience five whole litres of internal combustion engine?

That’s right, we’re not playing with the 2.3-litre Ecoboost Ford Mustang here. This is the full-fat 5.0-litre ‘Coyote’ V8, displacing 302-cubic inches of American muscle, even if the engine itself is built across the border in Ontario, Canada.

No replacement for displacement 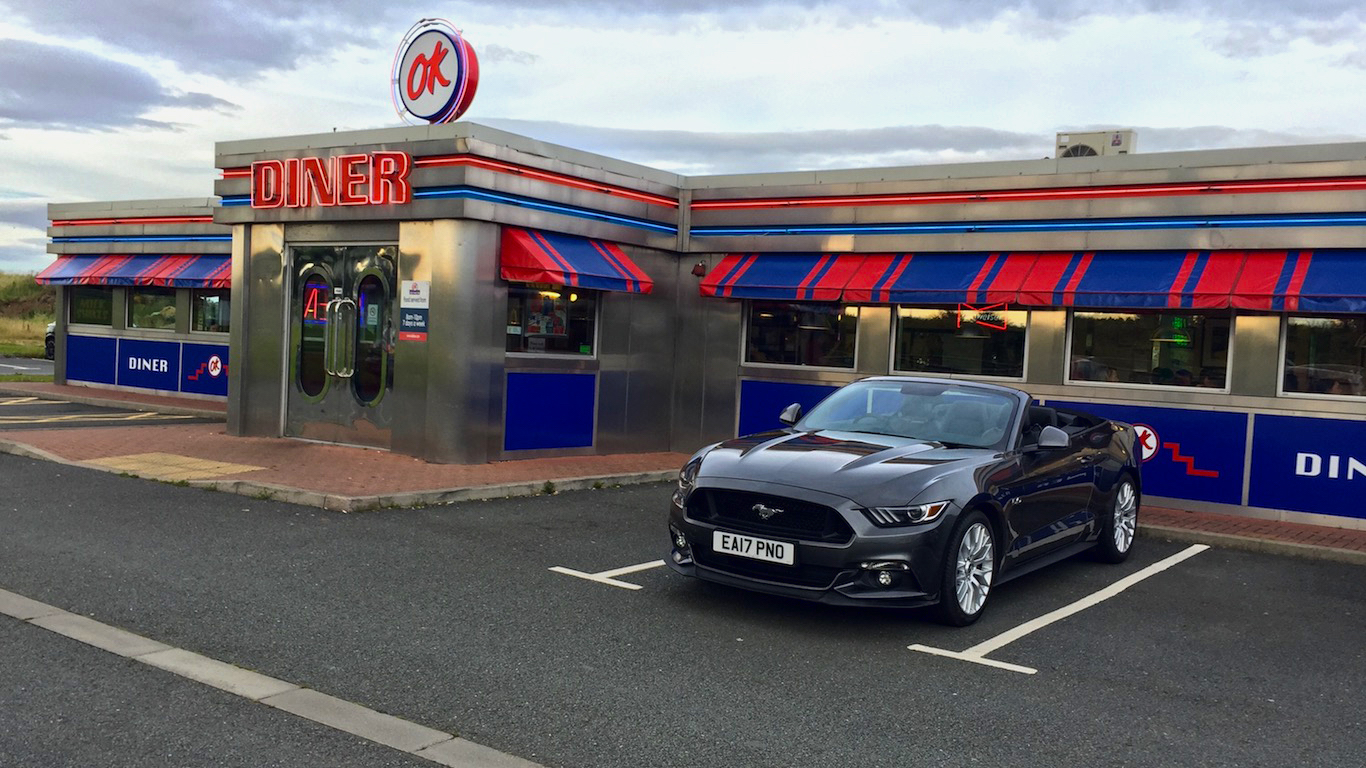 It’s powering the range-topping Mustang V8 GT Convertible, which pumps out 410hp and 391lb ft of torque. Fitted with a six-speed automatic gearbox, wearing premium ‘Magnetic’ grey paint and with the optional Custom Pack, this is as expensive as it gets for the Mustang in the UK: at £45,485 in total.

Although this five-point-oh might be more advanced than the one Vanilla Ice liked to sing about, it’s still a classic pony car engine. With a tugboat burble at idle, through to a NASCAR-like wail as it approaches the redline; this is everything you would imagine an American V8 motor would sound like.

It dominates proceedings with the Mustang GT, and offers a completely different experience to the Ecoboost engine. 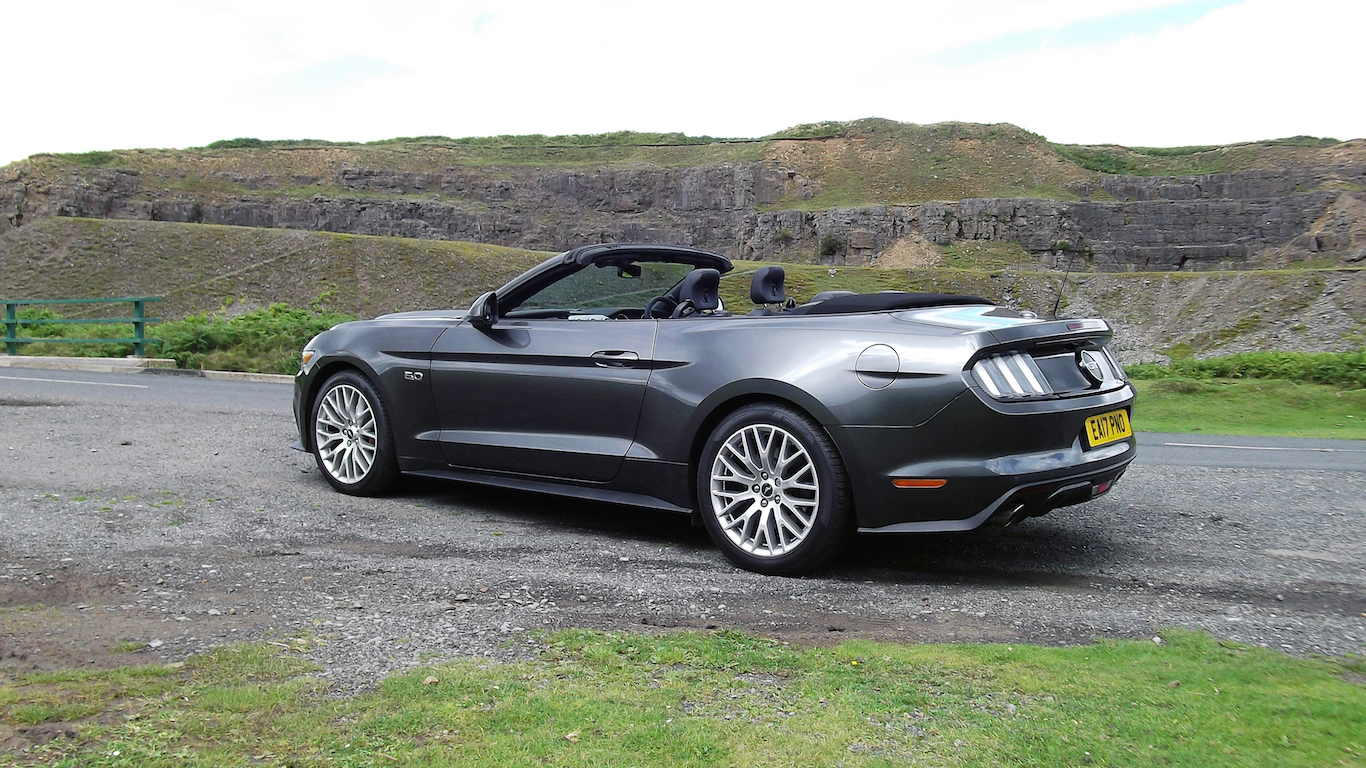 With a genuine pony car motor up front powering the rear wheels, it’s important that the Mustang also looks like a true pony car. And it does: from the ludicrously long bonnet, to the wide hips and trademark tri-bar taillights, it blends retro influences with modern touches. There are no Ford badges on the car at all – just a wild Mustang on the grille, a GT badge at the rear, and ‘5.0’ on the sides so everyone knows you bought the big one.

Despite never being officially sold in the UK until late 2015, the V8 GT proved instantly recognisable, with spontaneous shouts of “Mustang!” ringing out in town. Such a positive reaction, with no resentment, is perhaps testament to Ford’s blue-collar roots. It’s a genuine feel-good car, and one that seems to bring just as much pleasure to those who see it on the road.

Out in the street 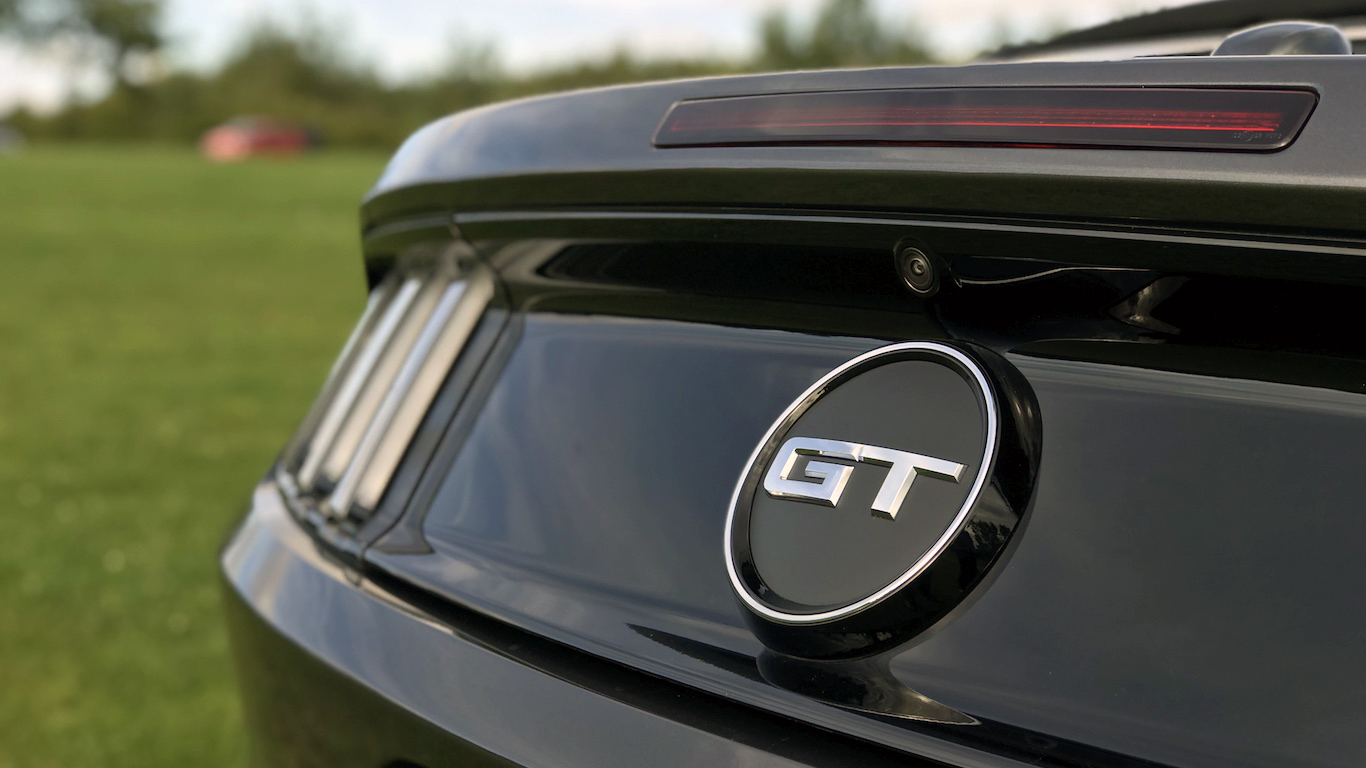 Although average in American terms, the dimensions of the Mustang make driving it in our cramped cities stressful at first. It’s wide – very wide – but at least the steering wheel is on the right side to help with judging gaps against oncoming traffic.

The soft-top hinders rear visibility when up, but all V8 GT models get a reversing camera as standard. Rear parking sensors come as part of the £1,795 Custom Pack, but front ones don’t feature at all. You’ll soon learn to allow for the lengthy snout when nosing into parking spaces.

Dancing in the dark 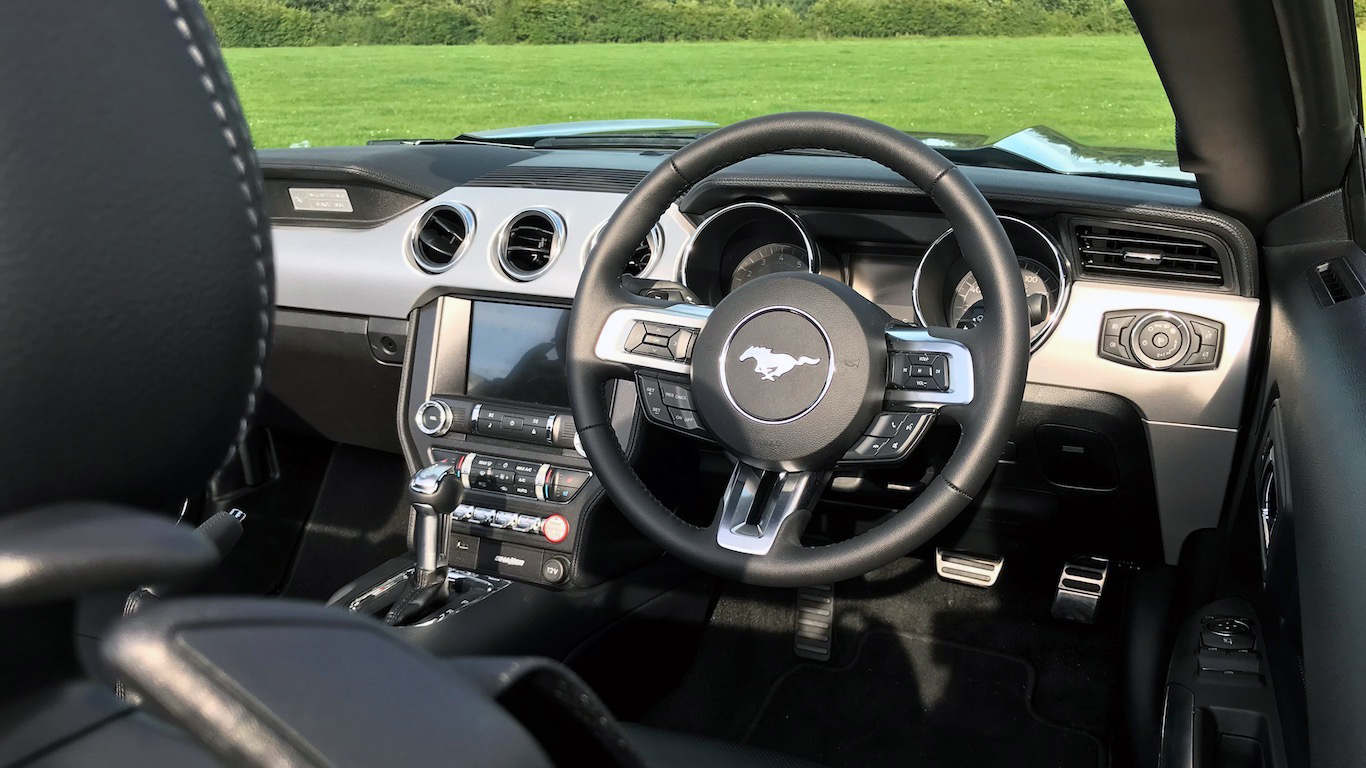 Front sensors aside, the V8 GT is loaded with kit, including dual-zone climate control, automatic xenon headlights, automatic wipers and keyless entry. Multimedia is handled by Ford’s Sync 3 system, using a rather dated-looking 8in touchscreen.

A forthcoming 2018 model-year facelift should see the touchscreen updated, and it’s the only thing which detracts from an interior that is plusher than you might expect. With black leather seats, black roof lining and a black dashboard, things can feel a little claustrophobic until you drop the top.

Working on the highway 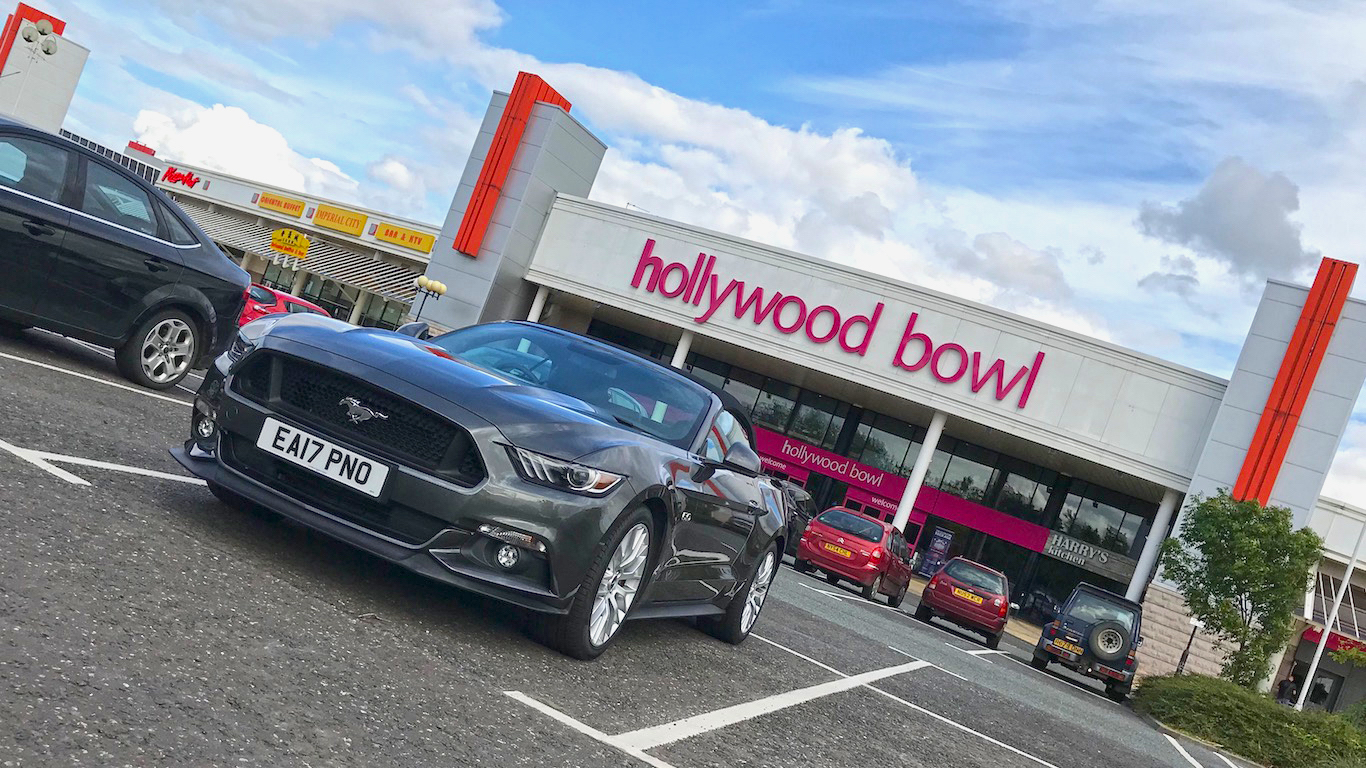 The roof takes less than 10 seconds to retract electrically, requiring the turn of a handle and one button press to operate. At motorway speeds there is some buffeting when you go topless, but not enough to make conversation impossible at normal volume.

At a slower pace, lowering the roof allows you to bask in the glory of the V8 engine some more, safe in the knowledge that the sound is all genuine.

The GT is an effective highway cruiser, and more than capable of hauling long distances without breaking a sweat. While the 19in alloy wheels will occasionally pick up surface imperfections, the ride is well-damped and more refined than typically ‘sporty’ European machines. 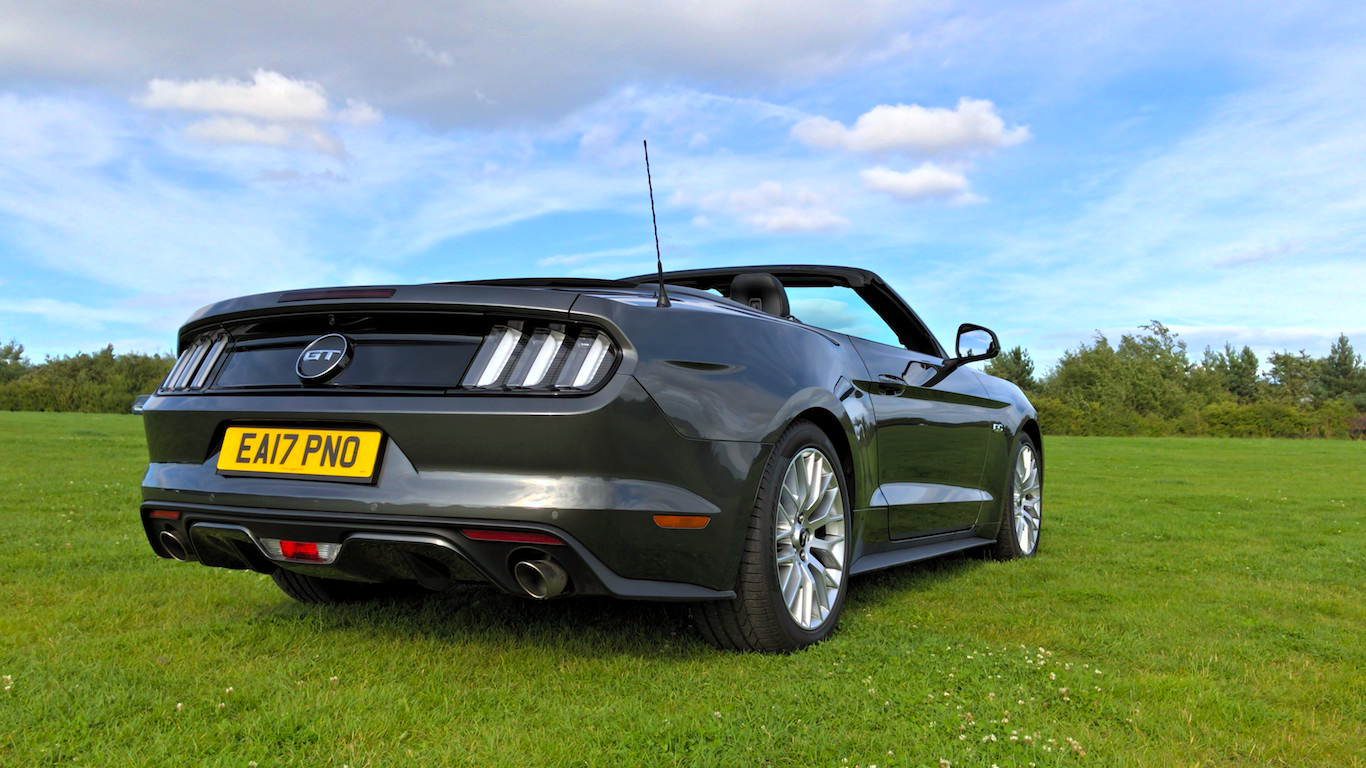 It’s unlikely that Ford’s engineers considered the twisty tarmac of the North Pennines when developing the sixth-generation Mustang’s new independent rear suspension. The trade-off for ride comfort is a car that can get overwhelmed by too many lumps, bumps and jumps in short succession.

The electrically-assisted steering is accurate enough, but this is a car you drive through feel from your backside as the car rotates around your hips, rather than messages from the front wheels.

You need to pay attention to that rear axle, as 391lb ft of torque is more than enough to overwhelm the tyres, even at low speeds in the wet. Sport and Track mode settings let you remove electronic interference and rely on the standard limited-slip differential alone – if you’re feeling brave. 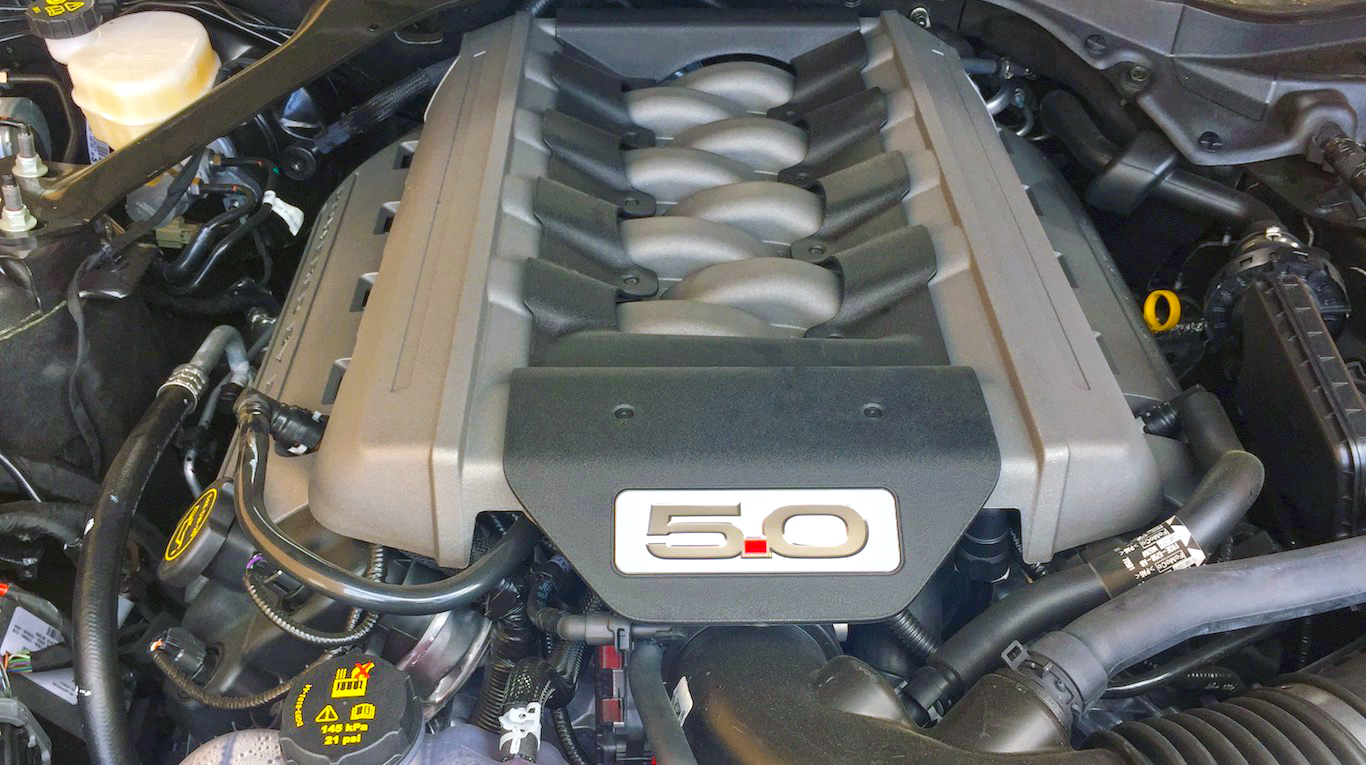 Despite all the torque and power on offer, the V8 GT never feels as fast at its 155mph top speed would suggest. Perhaps we’ve become too accustomed to the plateau-like torque graphs of turbocharged engines, rather than a naturally aspirated engine that needs revs to thrive. Learn to push the ‘Stang to 6,000rpm, enjoy the howl of the Coyote motor, and you start to overcome any feelings of initial sluggishness.

Where the V8 Mustang can’t escape physics is under braking. Tipping the scales at 1,792kg, this is a hefty stallion, and one that needs six-caliper Brembo brakes up-front to rein it in. The giant Brembos resist fade well, but you’re reminded of just how much mass you’re battling against. 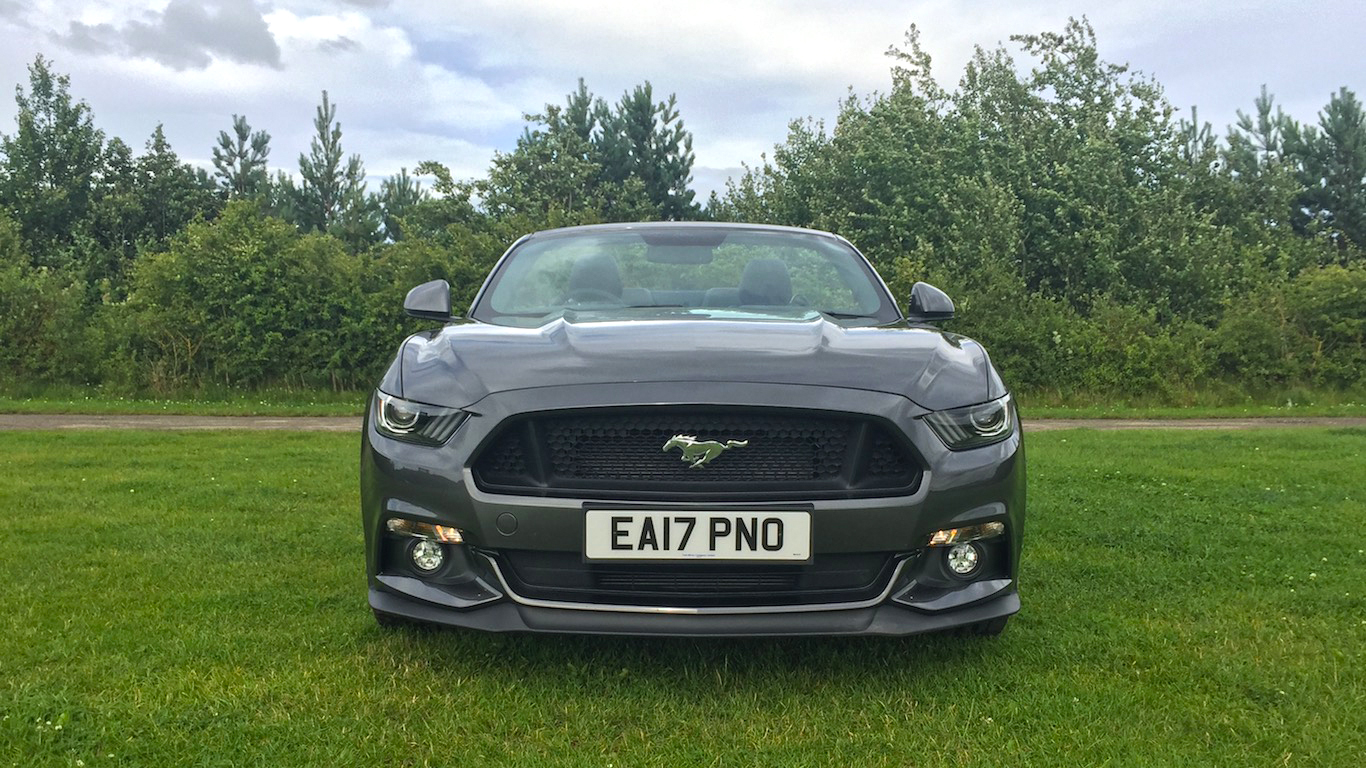 In reality, the GT Convertible is best enjoyed driven at eight-tenths, rather than being hammered like you’re trying to qualify on pole at Daytona Speedway.

This is, after all, a cruiser and that’s reflected in the six-speed automatic gearbox fitted to it. It majors on old-school smoothness rather than haste, and can become confused if you try to use the steering wheel-mounted paddles. Kickdown can also leave it flummoxed, as it monetarily hangs on, trying to decide on which cog to select.

The 2018 Mustang will get a new ten-speed automatic ‘box, which seems somewhat overkill with so much torque, but should result in better fuel economy. 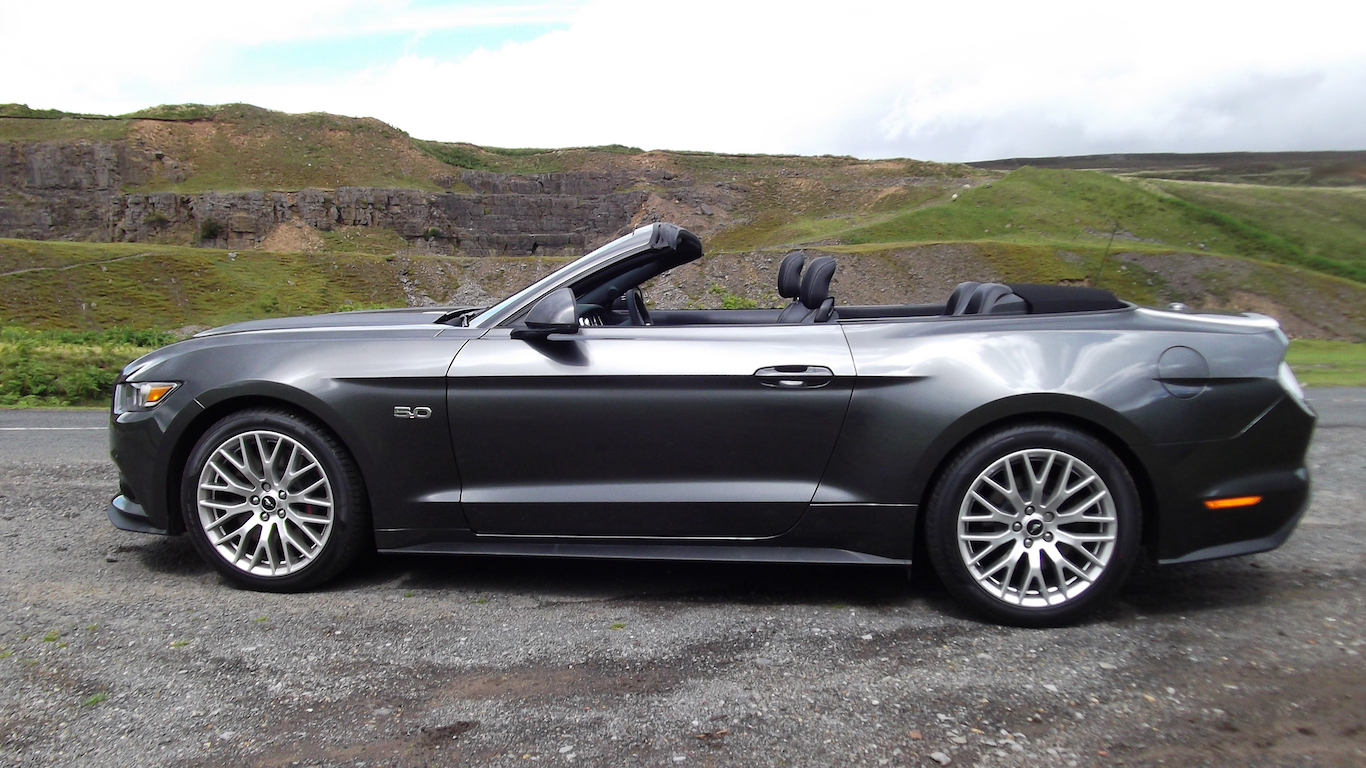 The inevitable question from anyone about the V8 GT concerns fuel consumption. The good news is that it sticks impressively close to its official combined figure. The bad news being that 22.1mpg is the number we’re talking about.

City cruising, or enjoying the V8 burble too much, will see that figure drop to 15mpg. Longer runs will pull it back into the low 20s, but you’ll easily drain the 61-litre tank in less than 250 miles.

Darkness on the edge of town 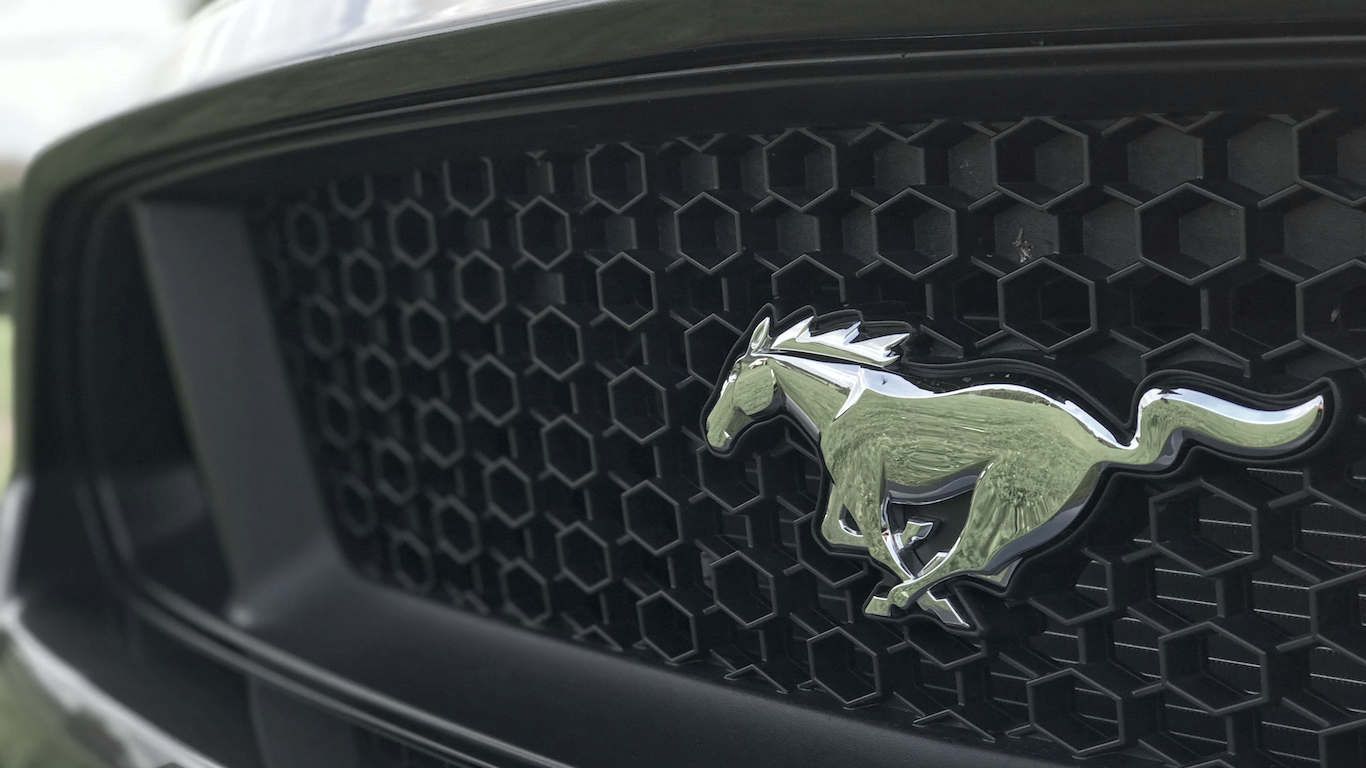 The truth is though, it doesn’t matter. In 23 years, if not sooner, we won’t even have the choice to buy something powered by such a giant naturally aspirated engine. Embrace the thirst, enjoy the noise, and the Mustang GT will make you smile like nothing else.

No, it isn’t perfectly suited to life in the UK, but that just adds to the authenticity. This is a huge slab of American pie, but at least having the cutlery on the right-hand side of the table makes eating it slightly easier.

For all its flaws, there is something immensely heartening about the fact that this isn’t some retro pastiche of a car from fifty years ago. The modern Mustang V8 GT is every bit as genuine as those cars that first rolled off the Ford line in 1964, and perfectly usable everyday.

Just like Bruce Springsteen has managed to stay relevant throughout his lengthy career, the Mustang has survived by adapting. But this blue-collar hero won’t last forever, so now is the time to go big and pick the 5.0-litre V8, before it’s too late.