Abarth celebrates its birthday with the fiery 695 70th Anniversario hot hatch. We drive it – and join the party with thousands of Abarth owners in Milan. 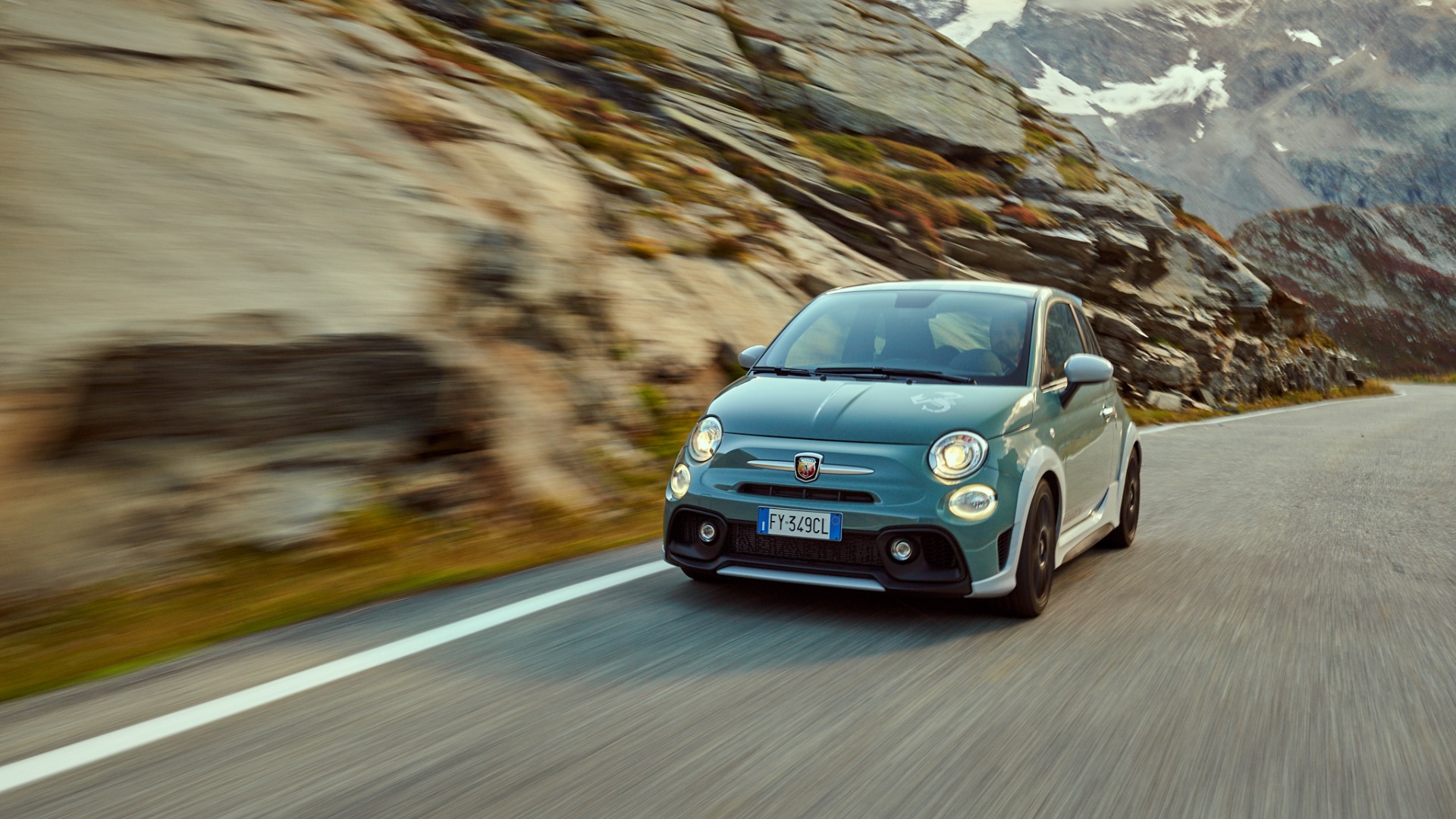 “There’s a certain satisfaction in humiliating bigger and more expensive cars with a modest hatchback.” So said Carlo Abarth (1928-1979), the larger-than-life motorcycle racer and pioneer of bolt-on car tuning kits, who spent his life doing just that. Today, the highly modified Fiats that bear his name – and scorpion star sign – still squeeze feisty performance into a pint-sized package.

Abarth was always obsessed with speed. Aged 11, he wrapped leather belts around the wooden wheels of his scooter to win races against local children. He was European motorcycle champion five times, and also beat the Orient Express train on two wheels, racing 850 miles from Vienna to Ostend. In 1949, he set up his own company, preparing cars for competition and selling parts. If you owned a Fiat but dreamed of a Ferrari, Carlo ‘The Magician’ Abarth was your man. 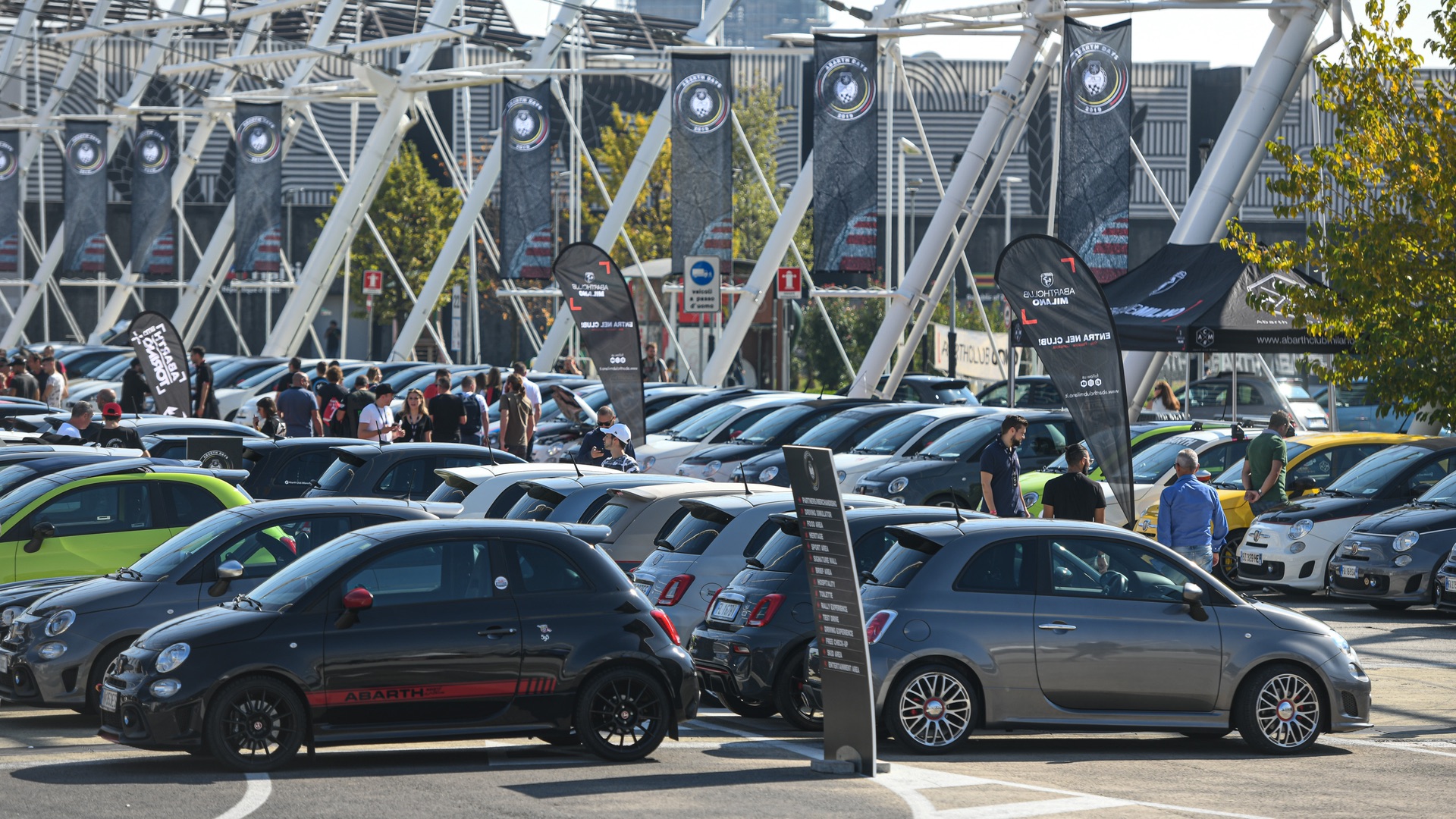 Before I drive the Anniversario, however, there’s more celebrating to be done. More than 5,000 Abarth fans and 3,000 cars – most of them modified – have descended on Milan for ‘the largest official Abarth meeting in history’. They have come from all corners of Europe, including the Czech Republic, Portugal and the UK. And they have come to party.

The pounding Euro-techno starts at 9am and doesn’t stop for the rest of the day. Thankfully, the cacophony of revving engines, hissing dump valves and popping exhausts mostly drowns it out. There’s boundless creativity on show, including Abarths with rust-look wraps, bouncing air suspension and upwards-opening ‘Lamborghini doors’. One crowd-pulling 595 has a 370hp Alfa Romeo 4C engine, ultra-wide wheels and four-wheel drive. I suspect Carlo would approve.

Launched at the event (in a blizzard of dry ice and even louder techno), the 70th Annniversario also turns plenty of heads. On the inside, it’s still unmistakably a Fiat 500 – a car first launched in 2007 – but the hip-hugging seats, alloy gearlever and Alcantara-wrapped steering wheel all feel suitably special. The 180hp 1.4-litre engine ignites with a throaty gargle and I swiftly leave Milan behind, heading south towards Modena and Italian supercar country. 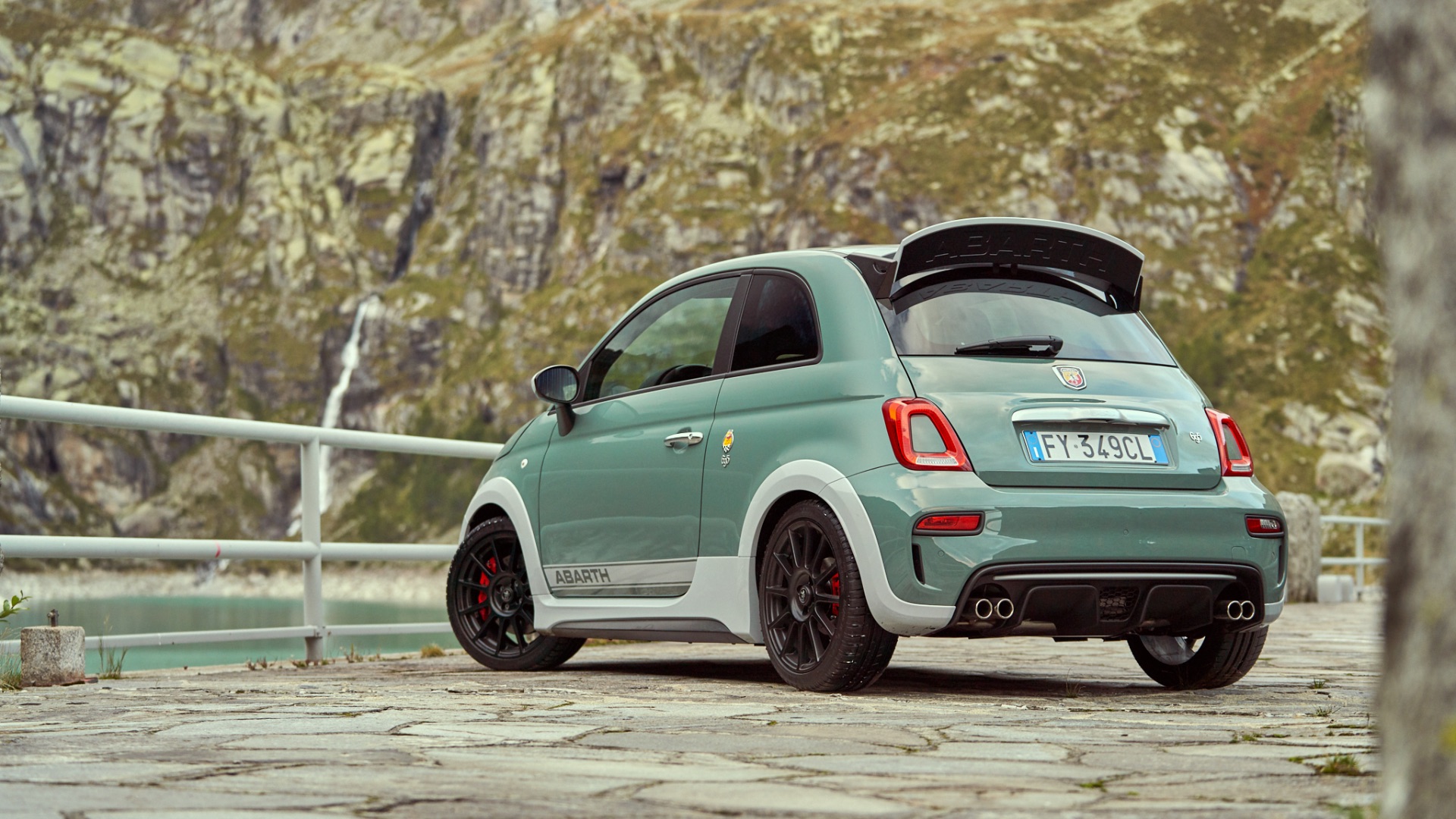 Not much happens until 3,000rpm, then the 695 abruptly necks a double espresso and races to the redline. This waaaait-for-it turbo lag seems oddly old-school, but ramps up the intensity and sensation of speed. For the record, 0-62mph takes 6.7 seconds and VMax is 139mph. The manual gearbox is slick and snappy, although it only has five ratios where most rivals offer six. It’s vastly preferable to the clunky auto ’box, however.

On rural roads, the Abarth is like an eager puppy: bouncy, boisterous and brimful of Italian brio. Turn-in is immediate, the brakes are tenacious and its mechanical limited-slip differential bites into corners. Switching to Sport mode sharpens throttle response, too. It’s a shame the light steering doesn’t offer more feedback; there isn’t the sense of connection you feel in a Ford Fiesta ST.

The Fiesta has another notable advantage: even the top-spec ST-3 is around £7,000 cheaper. And Abarth’s own 595 Esseesse, which has the same engine, costs £4,000 less. So spending £29,695 on the 695 70th Anniversario doesn’t really make sense. But as a surefire future classic that will impress the Abarthisti – and humiliate some bigger and (even) more expensive cars into the bargain – it has its place.

Only a 'world-beating Brexit trade deal' would protect UK automotive manufacturing, the Society of Motor Manufacturers and Traders has warned.
Read more

Lotus has been in Norfolk for 50 years: it’s celebrating Colin Chapman’s 1966 move with a special edition Evora
Read more