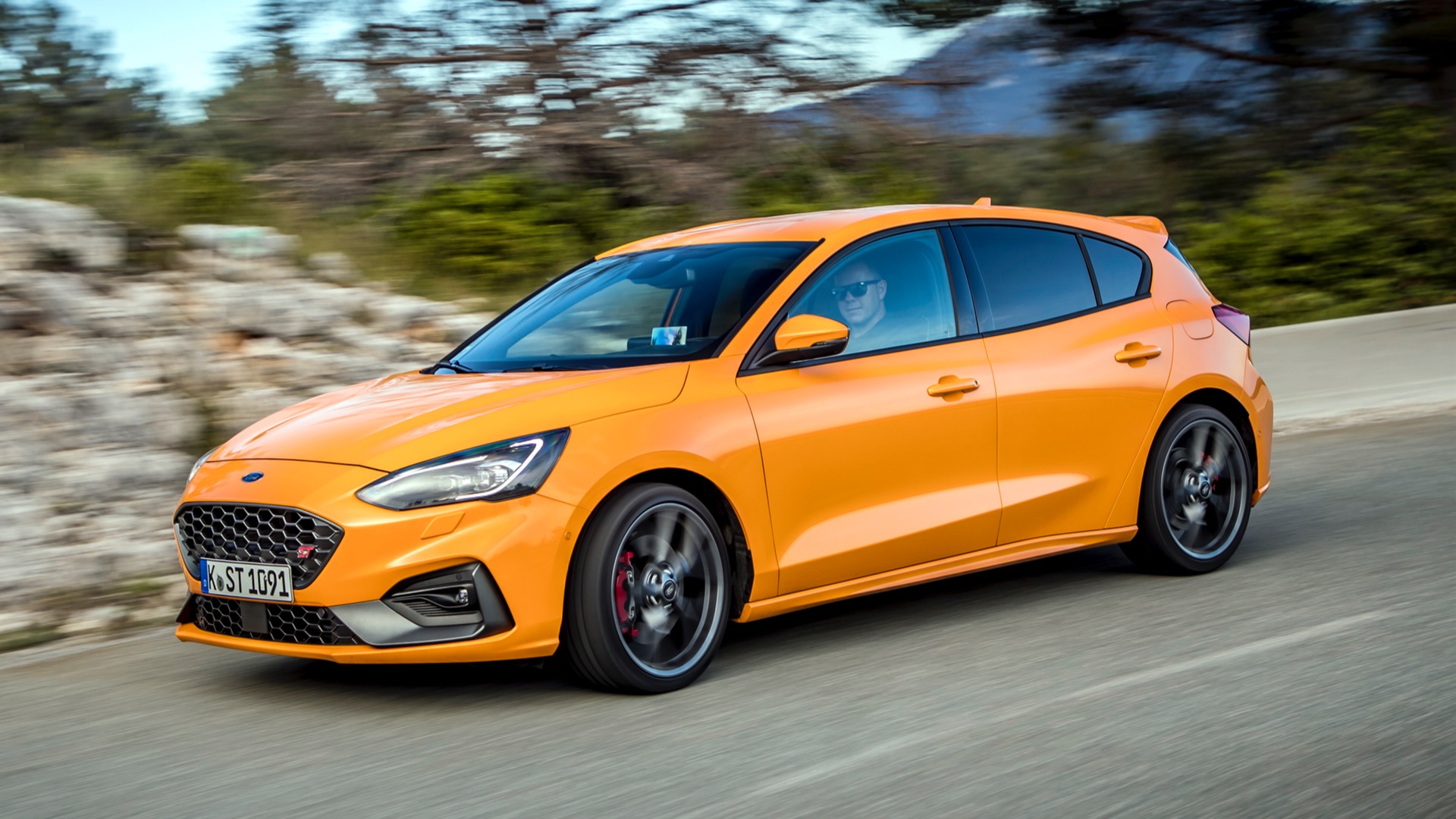 Leo Roeks talks a good game. The new Focus ST is “capable of punching you in the back the moment you hit the throttle,” says the director of Ford Performance. “Drivers can have full confidence in its ability to deliver on the track.”

His words sound like a sales pitch for the 2020 Focus RS, not a rival for the Volkswagen Golf GTI, Hyundai i30N and Renault Sport Megane 280. The ST is still semi-sensible – in theory, at least.

Ford may have turned up the wick, but expectations have been ratcheted up to match. The Blue Oval has history when it comes to hot hatchbacks, after all. I collect the keys at Nice airport, set the sat nav for the Route Napoleon and brace my back. Don’t let me down, Leo. 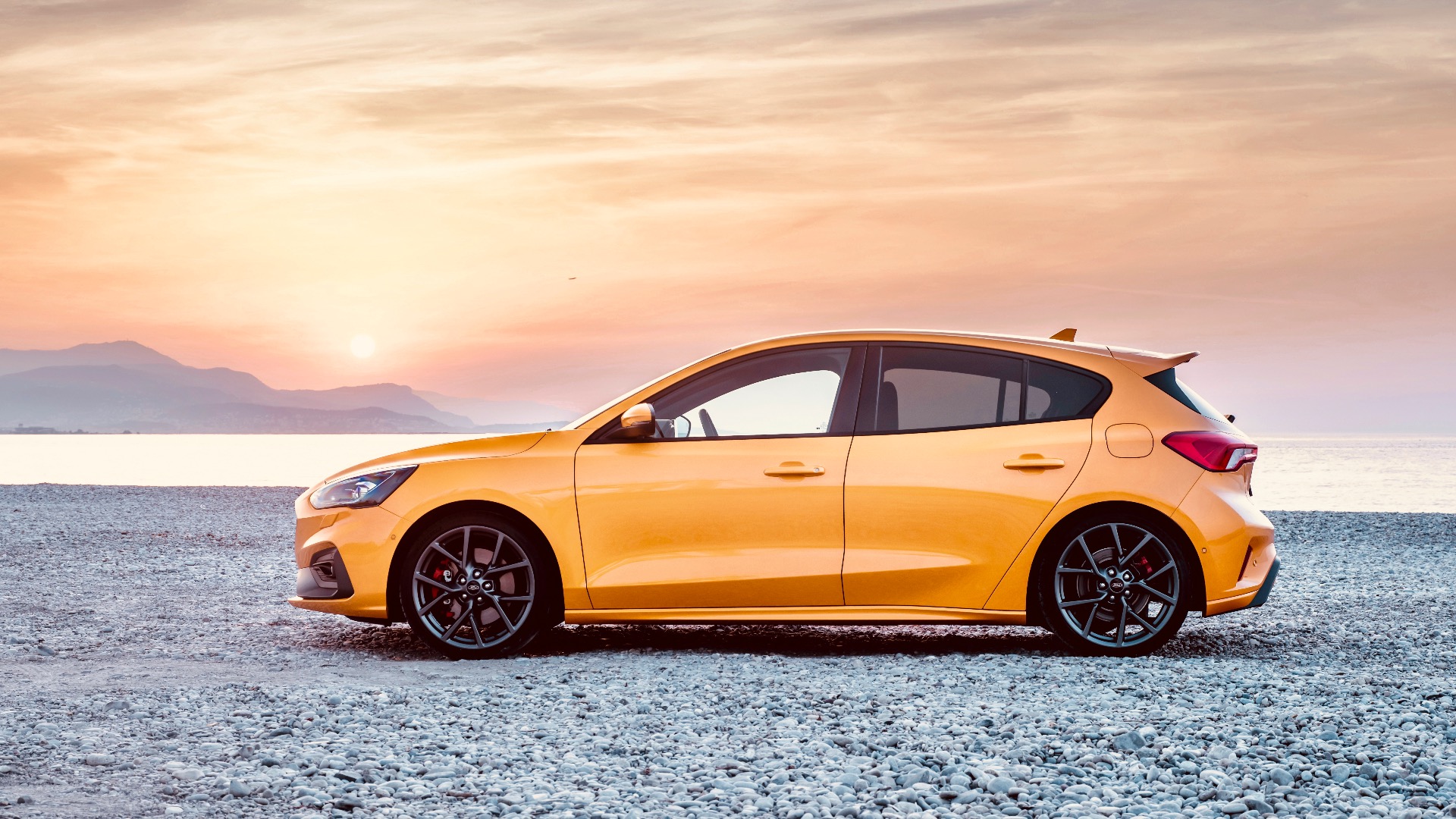 Let’s start with some stats. The ST uses a detuned version of the 2.3-litre Ecoboost engine from the previous Focus RS and current Mustang. It drives the front wheels via a six-speed manual gearbox (a seven-speed paddleshift auto arrives in the autumn) and electronic front differential. Peak power of 280hp at 5,000rpm means 0-62mph in 5.7sec: gains of 30hp and 0.8sec versus the outgoing ST. Top speed is capped at 155mph.

A class-leading 310lb ft (420Nm) of torque at 4,000rpm is what really stands out, though. The ST’s in-gear acceleration is quicker than the old Focus RS, and quarter-mile times are nigh-on identical. A clever anti-lag system – first seen on the Ford GT supercar – keeps the turbo spinning between shifts.

Stopping power is enhanced with larger 330mm front discs, twin-piston calipers and an electric brake booster. The ST also rides 10mm lower than a regular Focus and adaptive dampers are standard on the five-door hatch. As for efficiency, Ford quotes 35.7mpg and 179g/km. 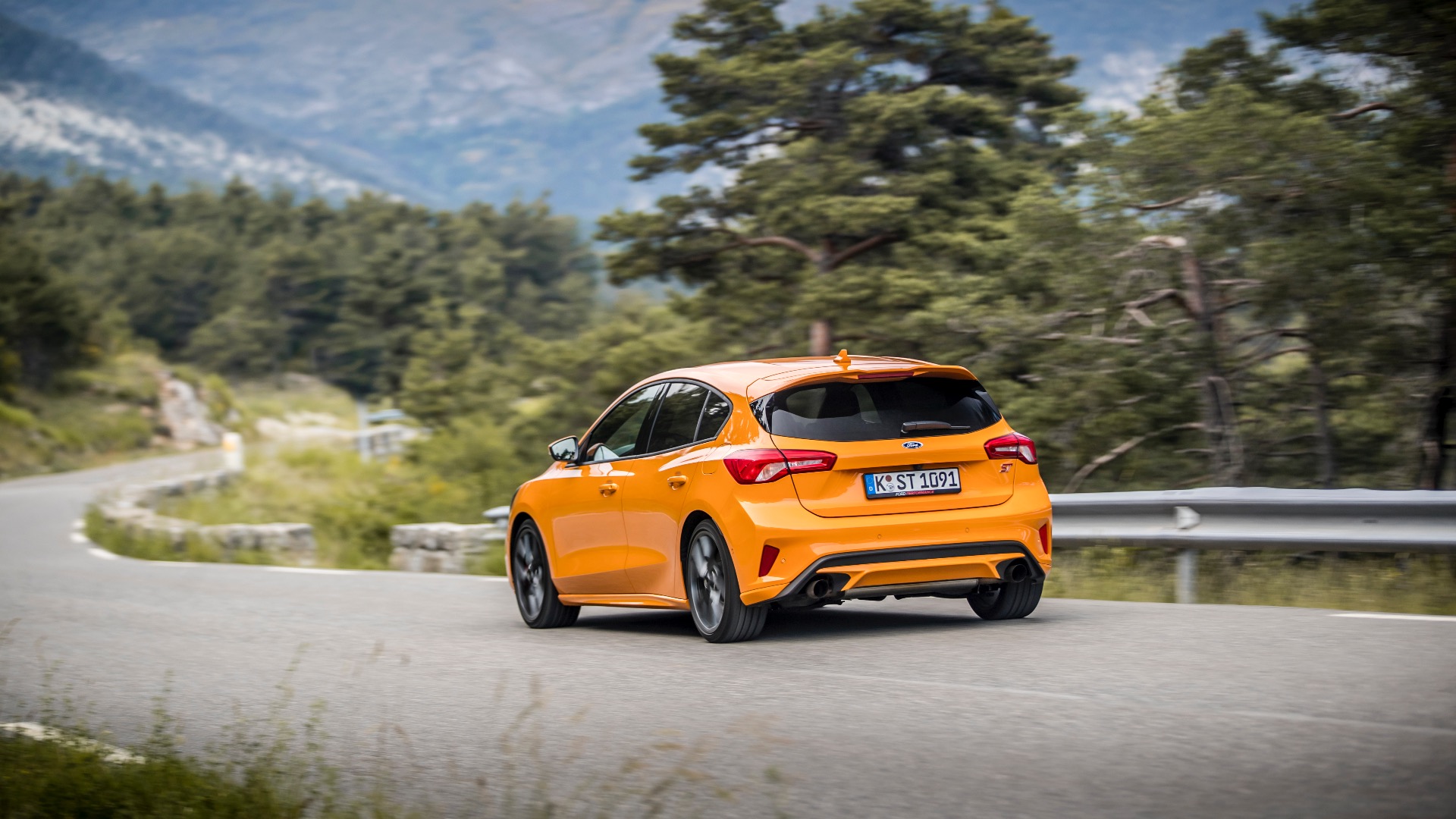 Another surprising figure is buried at the bottom of the spec sheet. At £31,995, the ST is priced on par with a Golf GTI and around £2,500 more than an i30N Performance. It’s also a whopping £9,000 more than a top-spec Fiesta ST-3. Engineering boss Stefan Münzinger repeatedly used the term “affordable performance”, but frankly, the ST seems a bit spendy. My test car nudged £35k with options. 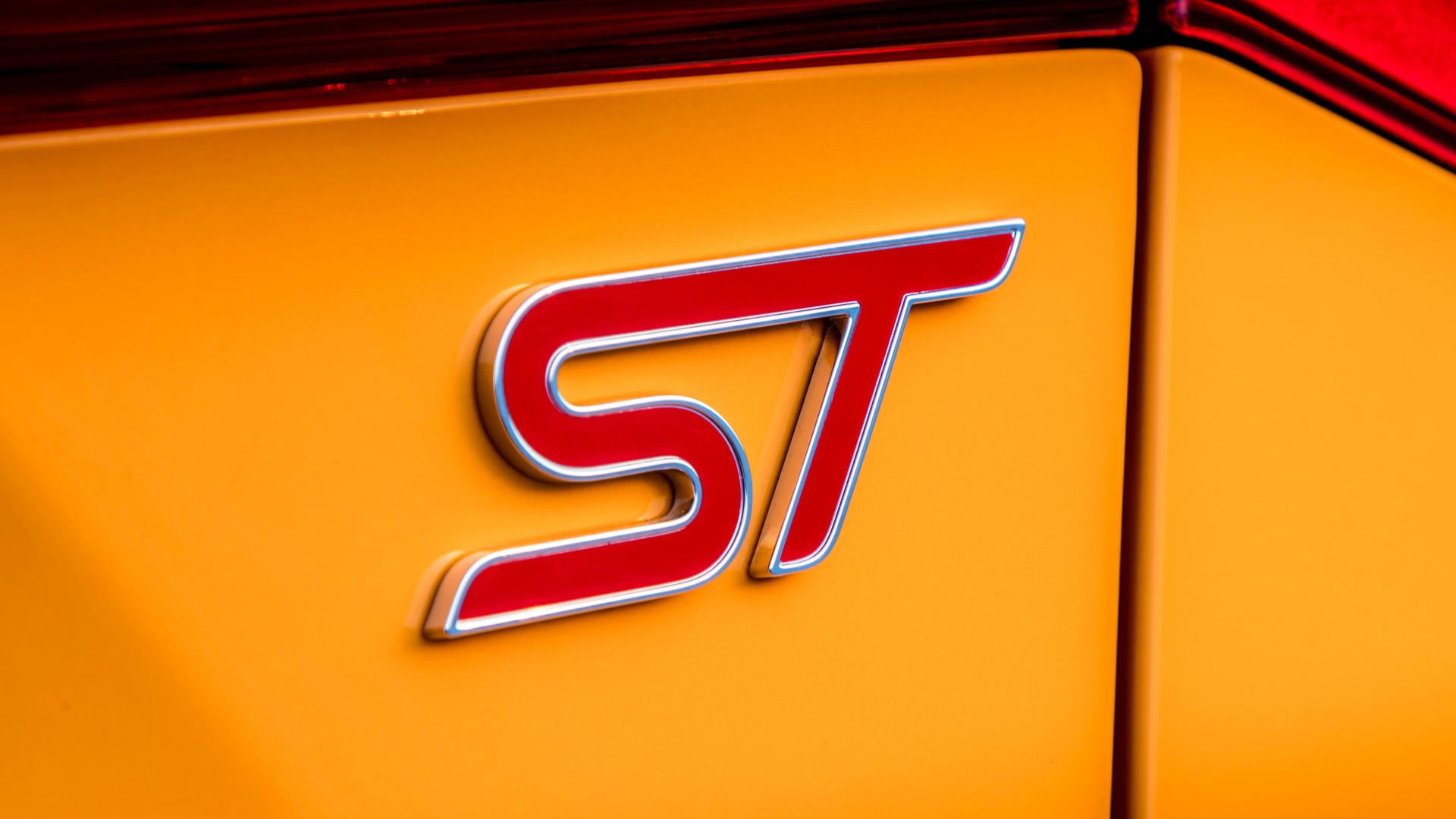 The man in a Ford Performance polo shirt offers a choice of Performance Blue or Orange Fury, both exclusive colours for the ST. Naturally, I opt for the latter. This is the ST’s long-established signature shade, starting with Electric Orange on the original Mk2, then Tangerine Scream on the Mk3. This latest may be the brightest orange yet; in the fierce July heat it looks almost radioactive.

Look beyond the fruity paint, however, and the new ST is relatively subtle. A honeycomb front grille improves cooling, the tailgate spoiler adopts a more aggressive angle and twin tailpipes poke out from a pseudo diffuser. Alloys are 18 inches, or you can opt for the ‘Magnetite’ matt 19-inchers seen here. Either way, they’re wrapped in bespoke Michelin Pilot Sport 4S tyres.

Make up your own mind about the ST’s styling, but I’m relieved Ford hasn’t gone ‘full Halfords’. The Focus is already quite fussy, with scalloped, BMW-style flanks and heavy haunches, so it doesn’t need more drama. The Honda Civic Type R shows what happens when designers get over-excited… 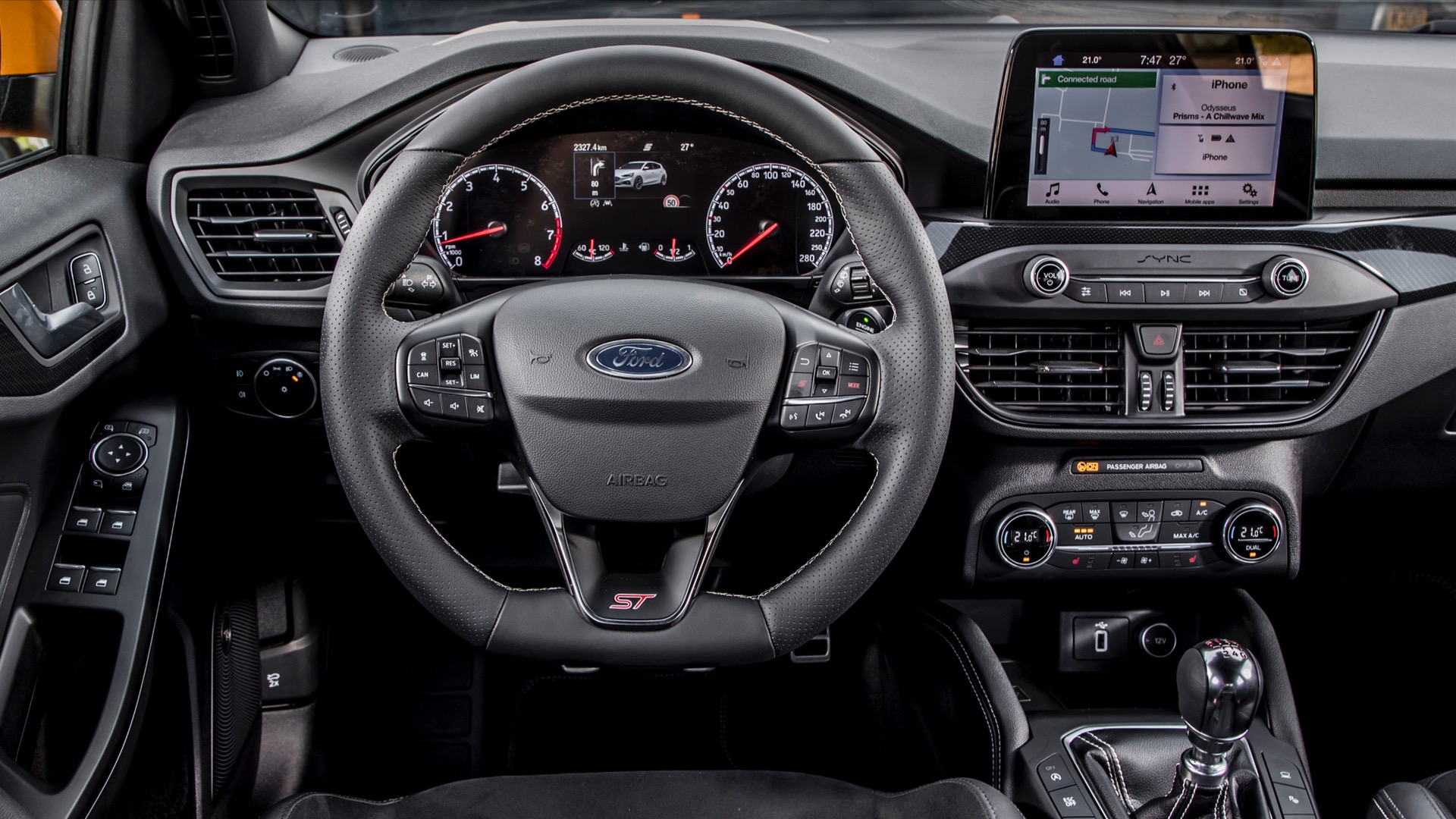 It’s similar to a standard Focus inside, too, although big-bolstered Recaro seats, an aluminium gear knob, alloy pedals and smatterings of fake carbon fibre hint lighten the mood. Crucially, those seats are now mounted lower, so you no longer feel perched on top of the car.

Controls for the drive modes – a first for the Focus ST – are on the steering wheel (rather than the centre console, as in the Fiesta). “BAM! They’re right there when you need them,” whoops Leo, a man who calls Ford’s Lommel test-track his “office”. There’s a one-touch Sport button, plus another for cycling through Slippery/Wet, Normal and Sport. Opt for the Performance Pack and you get an additional Track setting, but there’s no RS-style Drift mode. This is a front-wheel-drive car, remember?

This car has a long history with orange: Electric Orange on the Mk2, Tangerine Scream on the Mk3 and Orange Fury on this new Mk4. pic.twitter.com/8JrN21nffH

Elsewhere, the Sync 3 touchscreen media system is intuitive to use and connects to your smartphone via Apple Carplay and Android Auto. And you get all the practicality of a Focus hatchback – or indeed estate – including space for three adults in the back.

In a break with the past, Ford no longer offers ST-1, ST-2 and ST-3 trim levels. “The majority of customers chose the ST-3 anyway,” says Stefan. Instead, there is a single, well-equipped spec, with a limited choice of options on top. The Performance Pack, which includes Track mode, adaptive ‘CCD’ suspension, launch control and rev-matching for the manual gearbox, is a must-have. It costs £250 on the ST petrol hatch (which already has CCD) or £800 for other models.

Having a Nice time 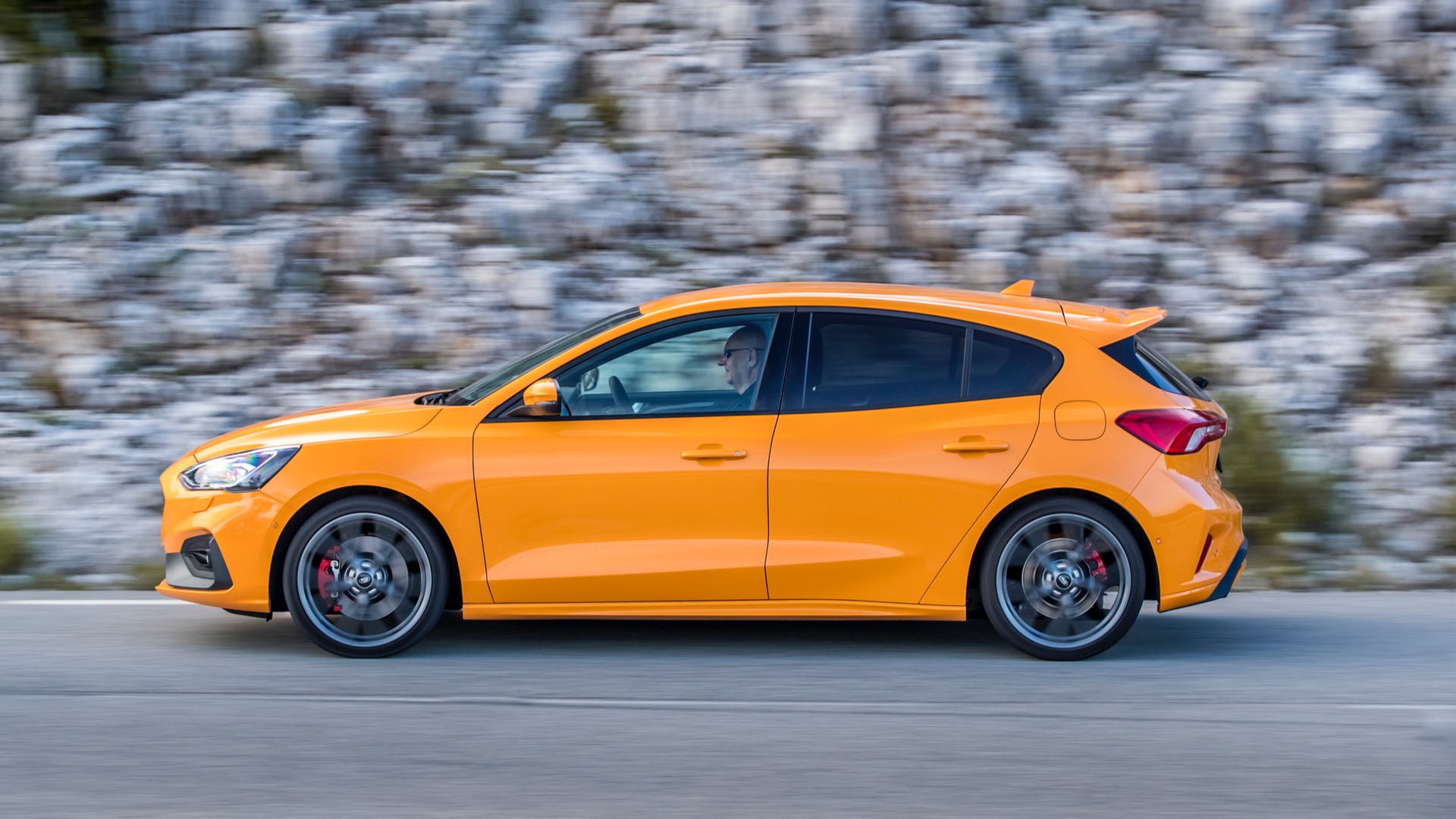 Threading my way through traffic-choked Nice, I’m first struck by how easygoing the ST feels. Its ride is measured but forgiving, shrugging off urban pockmarks where a Megane RS would jitter and jolt. Its steering is light (“We worked hard to remove friction from the system,” explains Stefan) and its gear lever moves with well-oiled precision. So far, so Focus.

As the road carves its way into the Alpine foothills, I stab at the Sport button. Instantly the Focus feels, well, more focused: throttle response sharpens, dampers tense and the steering gains added heft. Best of all, rev-matching is activated, which replicates the effect of heel-and-toe downshifts, matching engine and wheel speeds for smoother braking and cornering. There’s some torque steer as you accelerate away, however.

Switching to Track ramps up the action of the e-diff, hooking the car into apices as the exhaust pop-pops on the over-run. The contrast between drive modes is more pronounced than the ‘always on’ Fiesta ST, but even at maximum-attack the ST moves with a loose-limbed pliancy that some rivals lack. What’s missing is that telepathic connection and plucky playfulness that’s made the Fiesta such a cult car. The Focus is more rounded, yet it’s missing a little magic. 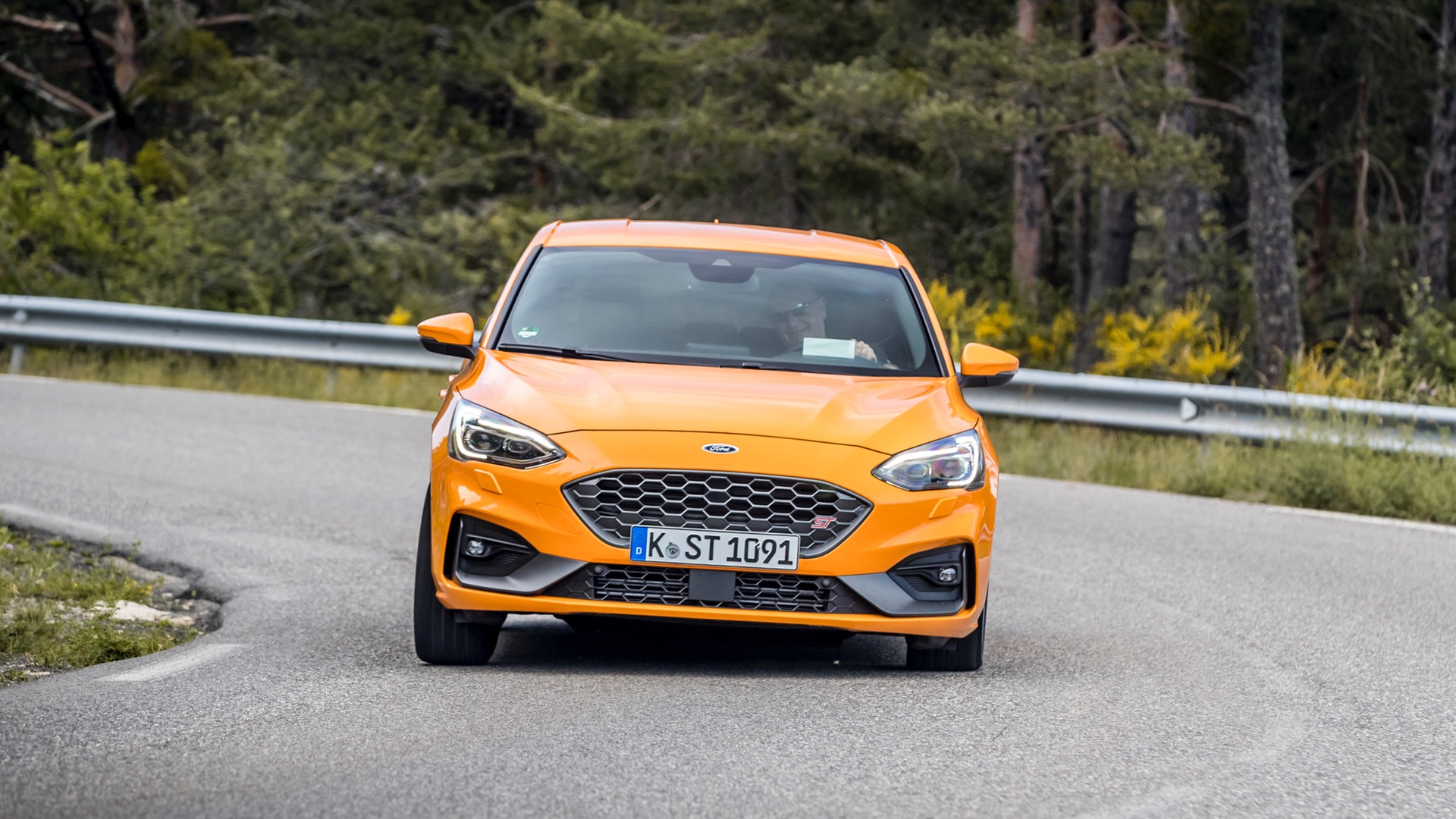 Make no mistake, though, the ST serves up serious cross-Provence pace. The Ecoboost engine punches hard from 2,500rpm and revs keenly, helped by short gear ratios and the anti-lag tech. It never feels short of shove and its gravelly soundtrack (artificially enhanced, admittedly) is pleasingly reminiscent of the old, five-cylinder Focus ST.

There’s plenty of grip before the chassis eventually defaults to understeer and the brakes inspire confidence, too. The booster adjusts bite-point to keep pedal response consistent, so they never go soft – even on long mountain descents. Another added bonus – and one of the joys of a hot hatch – the Focus actually feels the right size for these roads. On capillary lanes where a supercar would feel squeezed, it scarcely needs to slow down. If you’re really going for it, the gearbox allows clutchless flat-shifting near the redline.

This, then, is a car that flatters your mistakes and makes it easy to drive ‘enthusiastically’. I’ve been doing just that for hours and the mid-afternoon heat is like an oven outside. But with the air-con set to deep-freeze, I’m still relaxed and raring to go. 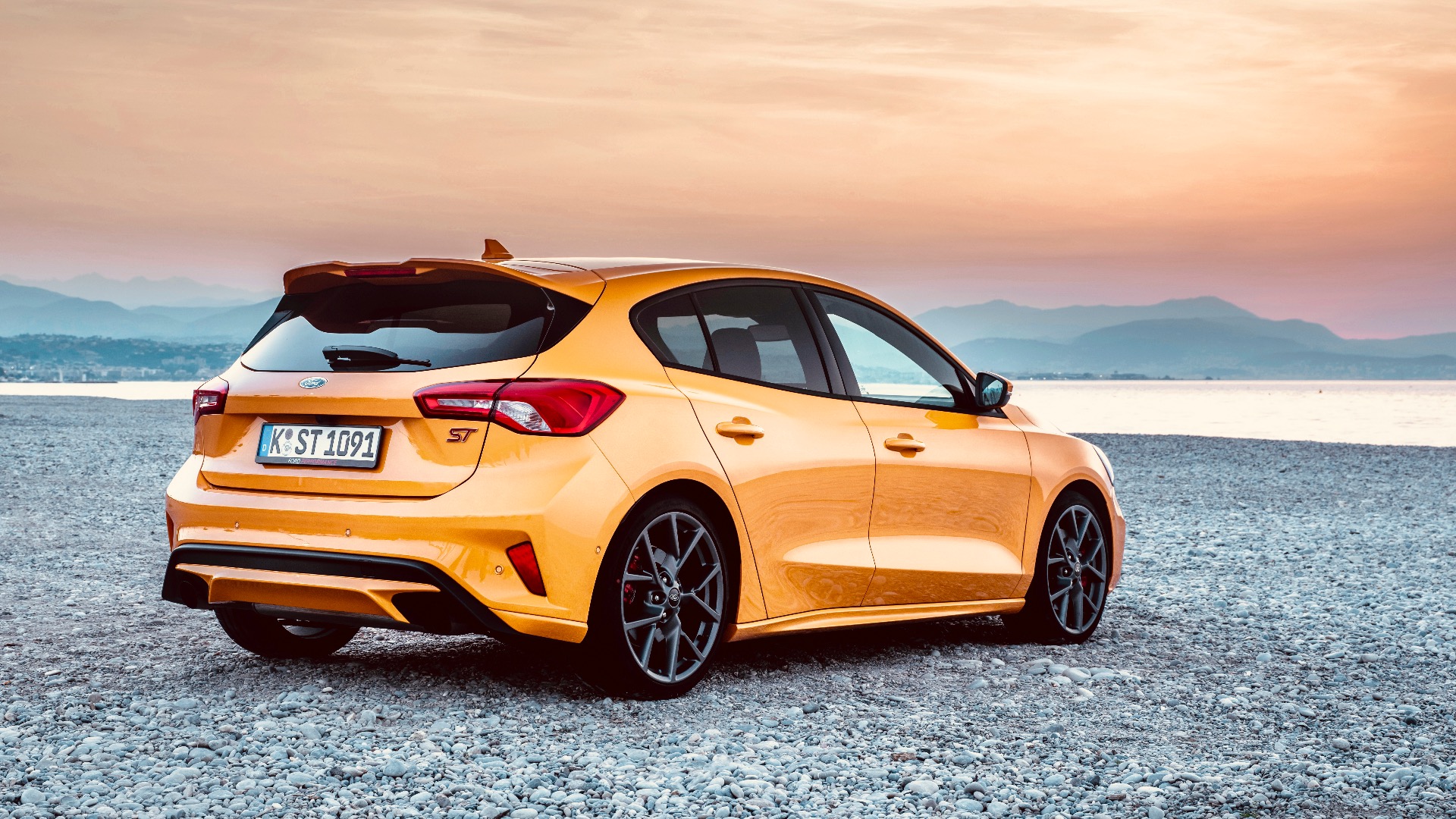 Perhaps that’s the point. Aimed squarely at the hot hatch heartland, the ST needs to tick a lot of boxes. It has to work as a daily driver, a school-run shuttle, a family holdall – and it does all of those with a similar breadth of abilities to the benchmark GTI. Indeed, with the Golf due for replacement soon, the Focus looks well-placed to claim its crown.

Nonetheless, while it may be ‘everyman’, the ST isn’t for everyone. The Type R, i30N and Megane RS are all more exciting on the right road, while spending a little more on the Mercedes-AMG A35 gets you a truly premium cabin and four-wheel drive. I’d probably still go for the Golf, but that’s as much down to personal preference (I’ve owned several GTIs before) as objective assessment.

The Focus ST isn’t a head-and-shoulders above the competition like the brilliant Fiesta. But it’s a very quick and accomplished hot hatch that, I suspect, would work its way into your affections over time. Next year’s Focus RS should be something quite special.