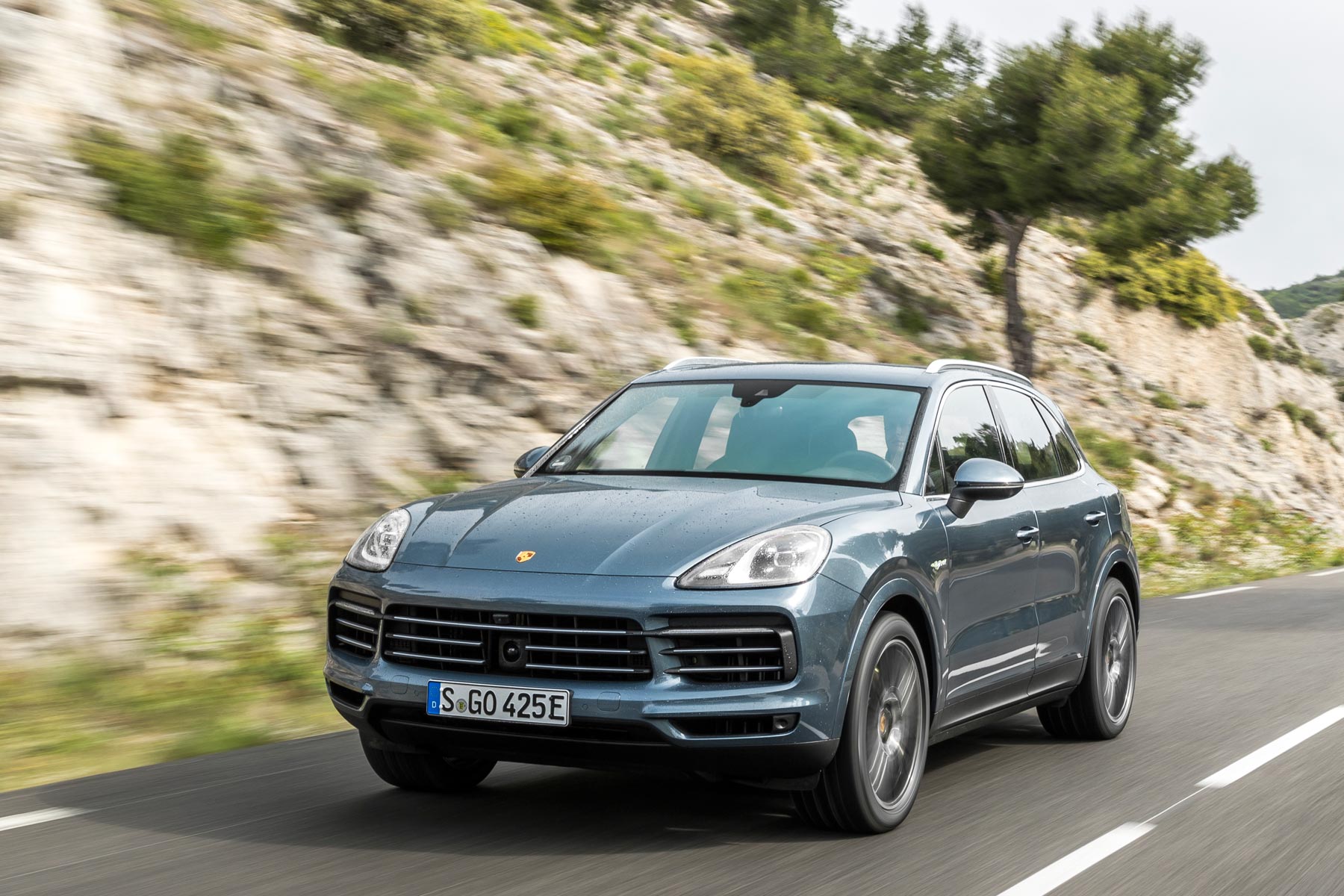 This is the third Porsche Cayenne hybrid in eight years. Not even Toyota manages that replacement rate. But the 2018 Cayenne has extra significance, because, for the time being at least, there are no diesel models in the Porsche range. If you care about fuel economy, the E-Hybrid is the only way to go.

Still, mpg and CO2 aren’t the real story here. This is a Porsche, after all, so the message is strongly biased towards performance, blended with some fanciful mpg and CO2 numbers that look good on environmental balance sheets.

This latest Cayenne is a plug-in, like the previous model, but the new battery has higher capacity without any additional weight, plus other tricks up its sleeve.

Core power is supplied by the 3.0-litre petrol single-turbo V6 from the base-model Cayenne, with the electric motor permanently coupled to the four-wheel-drive system. The combination pumps the petrol-supplied 340hp up to a maximum of 462hp. Even more impressive are the torque figures: 516lb ft from not much more than idling speed. Suddenly, the similarly priced twin-turbo Cayenne S seems to make little sense.

So it’s not simply an eco Porsche? 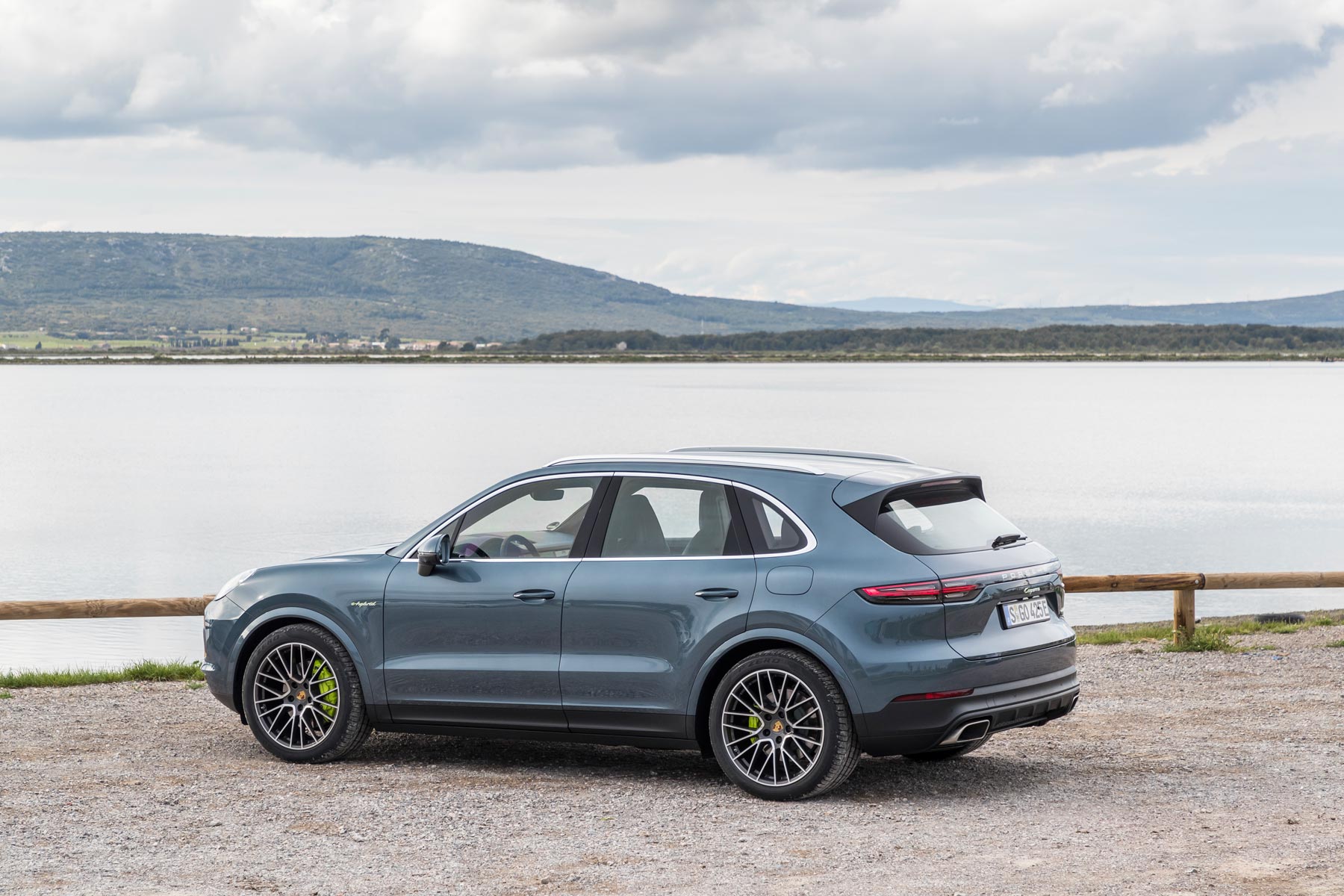 Far from it, even though the E-Hybrid initially defaults to full-electric mode. You should get 20 miles of zero-emissions driving (Porsche’s official figures suggest 27 miles, but that’s the fault of a daft test regime more than anything).

After that, regular hybrid mode takes over, with economy the first consideration. More interesting, however, are the Sport and Sport Plus modes. Both of these retain some battery energy, which comes into play when you ramp up performance demands. Mash the throttle and you get an extra 136hp of electric boost.

It can’t last for long, of course, but then you don’t usually ask for full power in any car for more than a few seconds at a time. Porsche’s clever trick is that, in Sport Plus mode, the battery gets recharged by the V6 petrol engine. Thus you’re unlikely to run out of battery boost except in the most extreme circumstances. Want that boost in any setting? Simply press the Sport Response button for 20 seconds of hyperdrive. 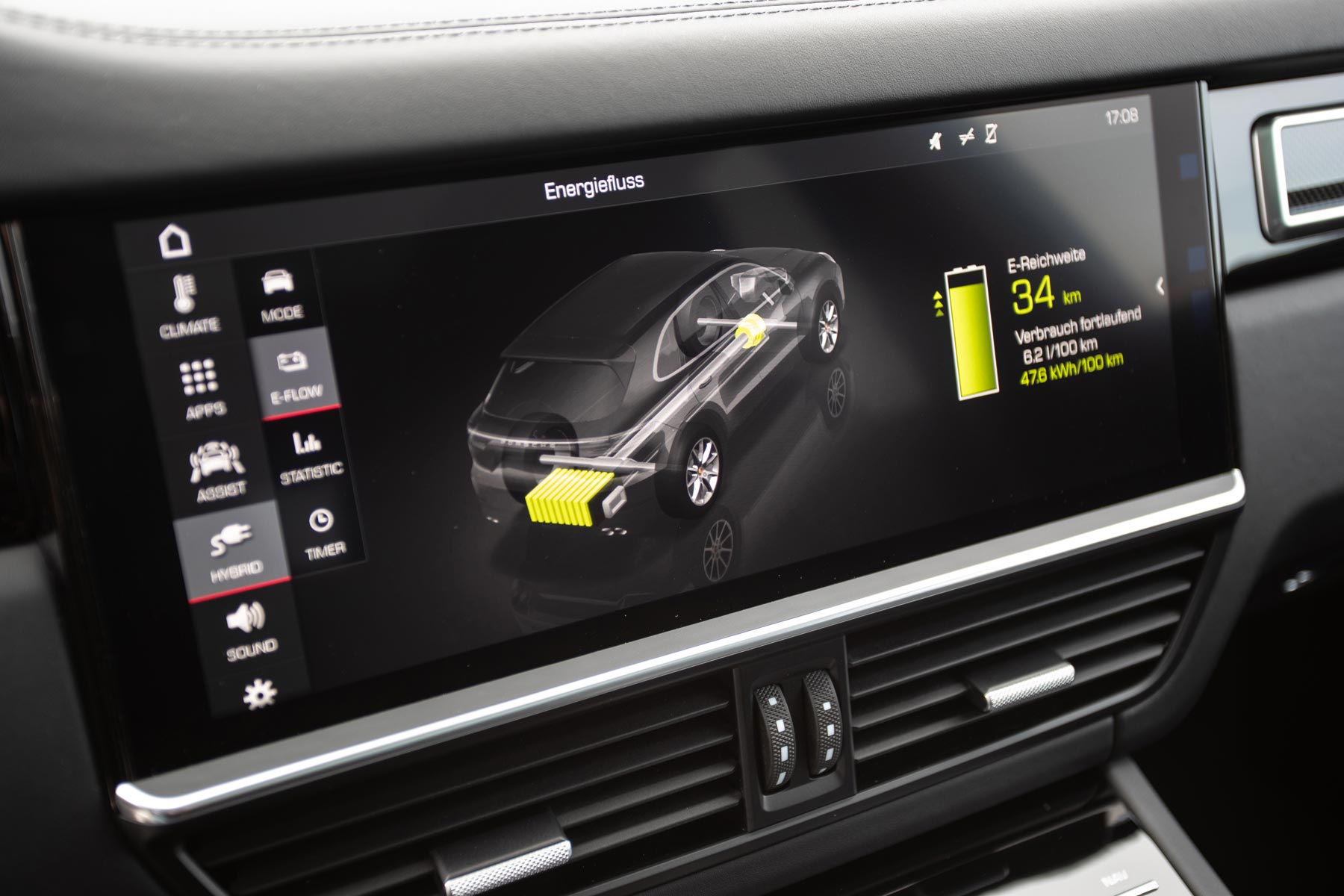 And my goodness, it all works extremely well. We are talking performance to rival the original Cayenne Turbo, with the ample torque assuring instant acceleration. Zero to 62mph takes five seconds dead. Not bad for a 2.3-tonne SUV, even if 300kg of that is down to the batteries and associated paraphernalia.

It’s a car where there never seems be a shortage of speed, and you step away thinking how very clever Porsche’s engineers have been getting all these algorithms so finely honed that the Cayenne optimises to any driving style I adopted. 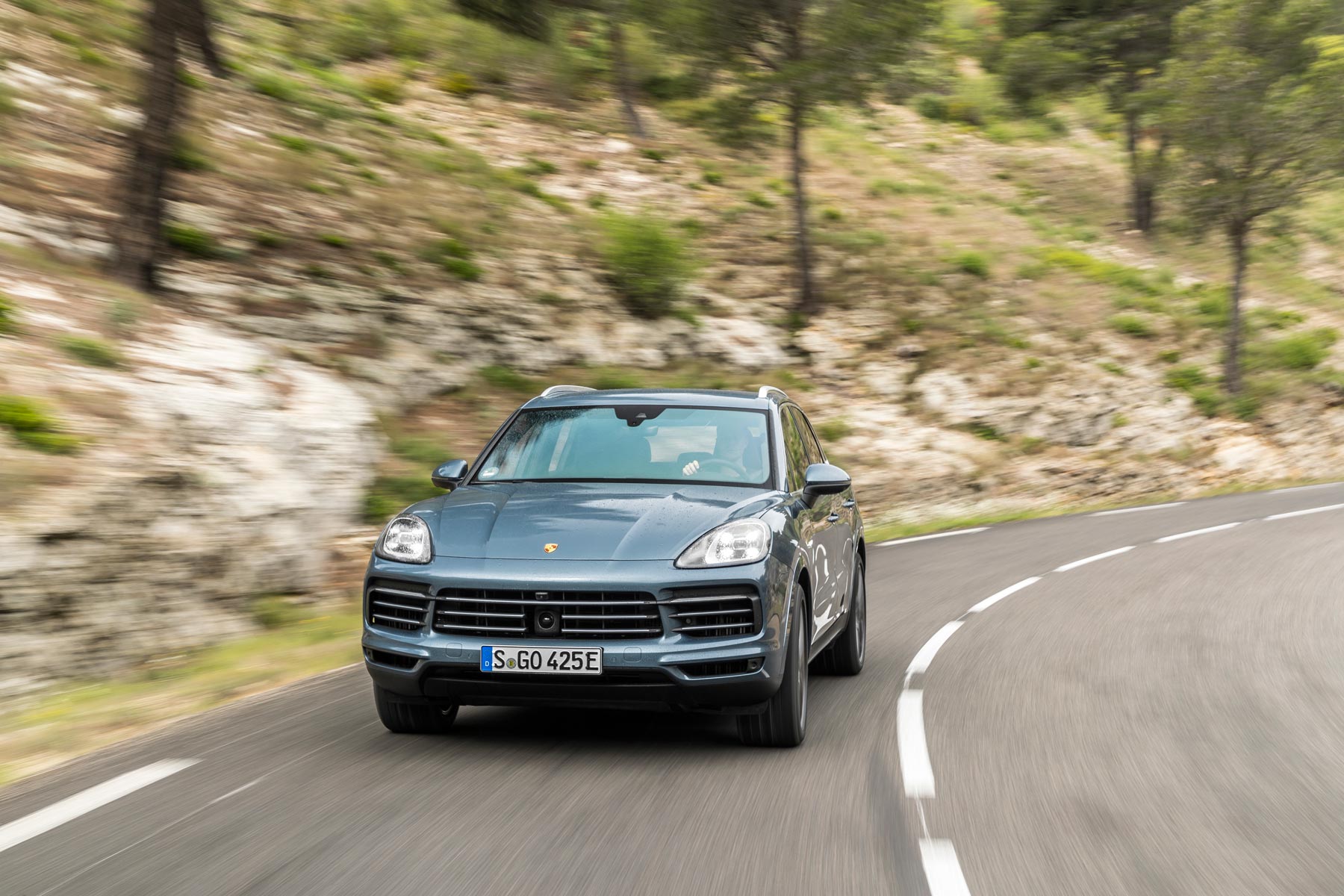 The Cayenne has always been a contradiction: a weighty SUV simply shouldn’t drive like a sports car. Even with sufficient power, the height and centre of gravity stack up against it having any sense of purpose when it comes to cornering at speed.

And here’s the caveat. The Cayennes on the media launch, on the autoroutes and hills around Aix-en-Provence, were not on the standard suspension you get on a £67k Porsche E-Hybrid. Their optional air suspension improved the ride and agility, while the dynamic handling add-on did clever things to reduce body-roll when cornering.

Notwithstanding this, the results are little short of amazing. On winding mountain roads, there’s much entertainment to be had punting the Cayenne along at improbable speeds, always with a feeling of safety and security. Switching to Sport or Sport Plus adds additional stiffness to the suspension, which helps the handling. However, you can control the suspension independently to provide a softer ride with the improved throttle response if you so choose. 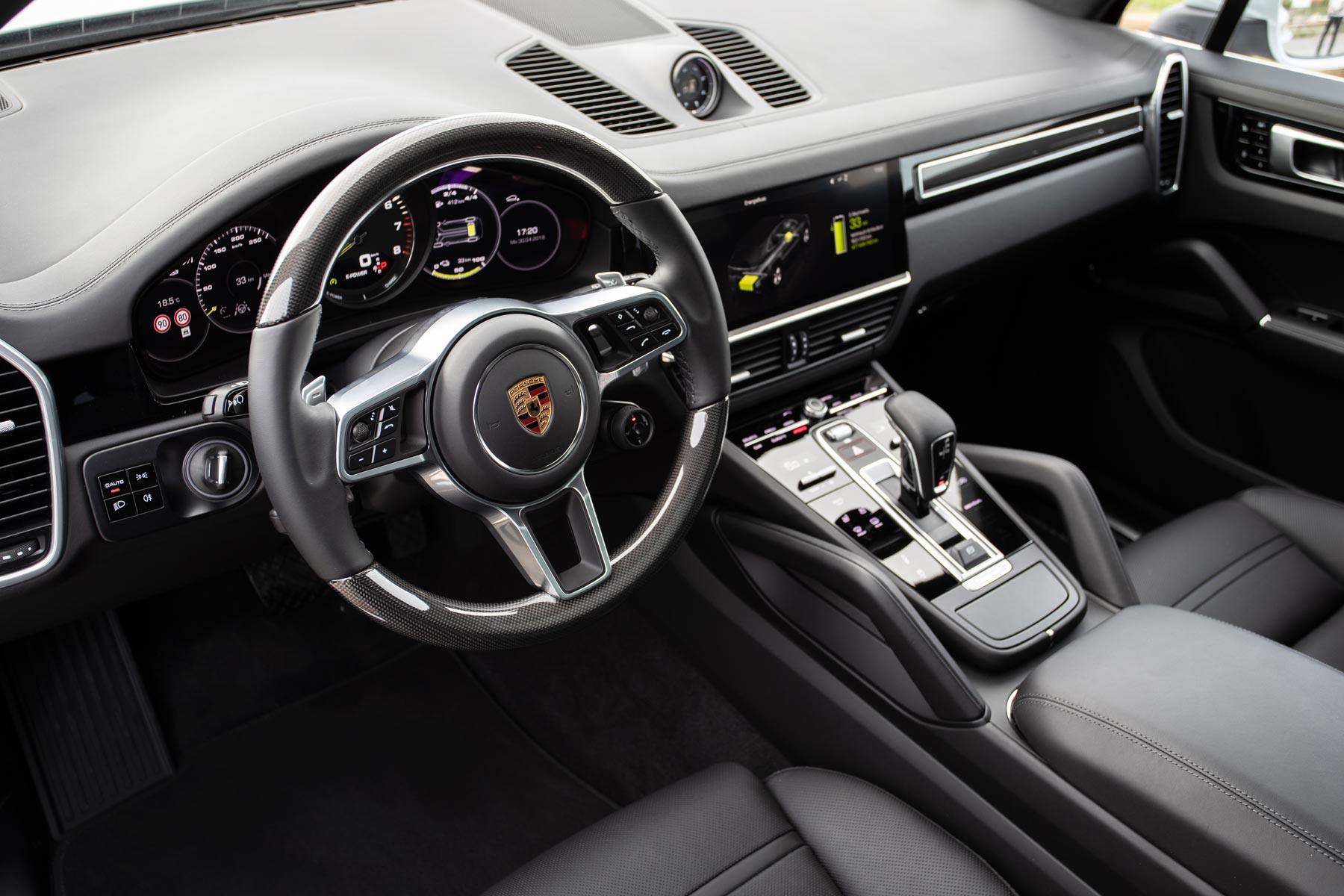 Anyway, if you drive the Cayenne quickly, electronics will work out when it’s a good time to firm up the suspension and reduce body roll, and do it without the driver having to think about it.

I love this sense that, whatever driving circumstance I can dream up, Porsche seems have thought of it first and programmed the ECU to address the situation. Here’s another example: the sat nav detects how far it is to your destination, then, if there’s charge available in the battery, the car will switch to electric late in the trip to minimise fuel-use.

Is the Cayenne E-Hybrid a diesel-beater? 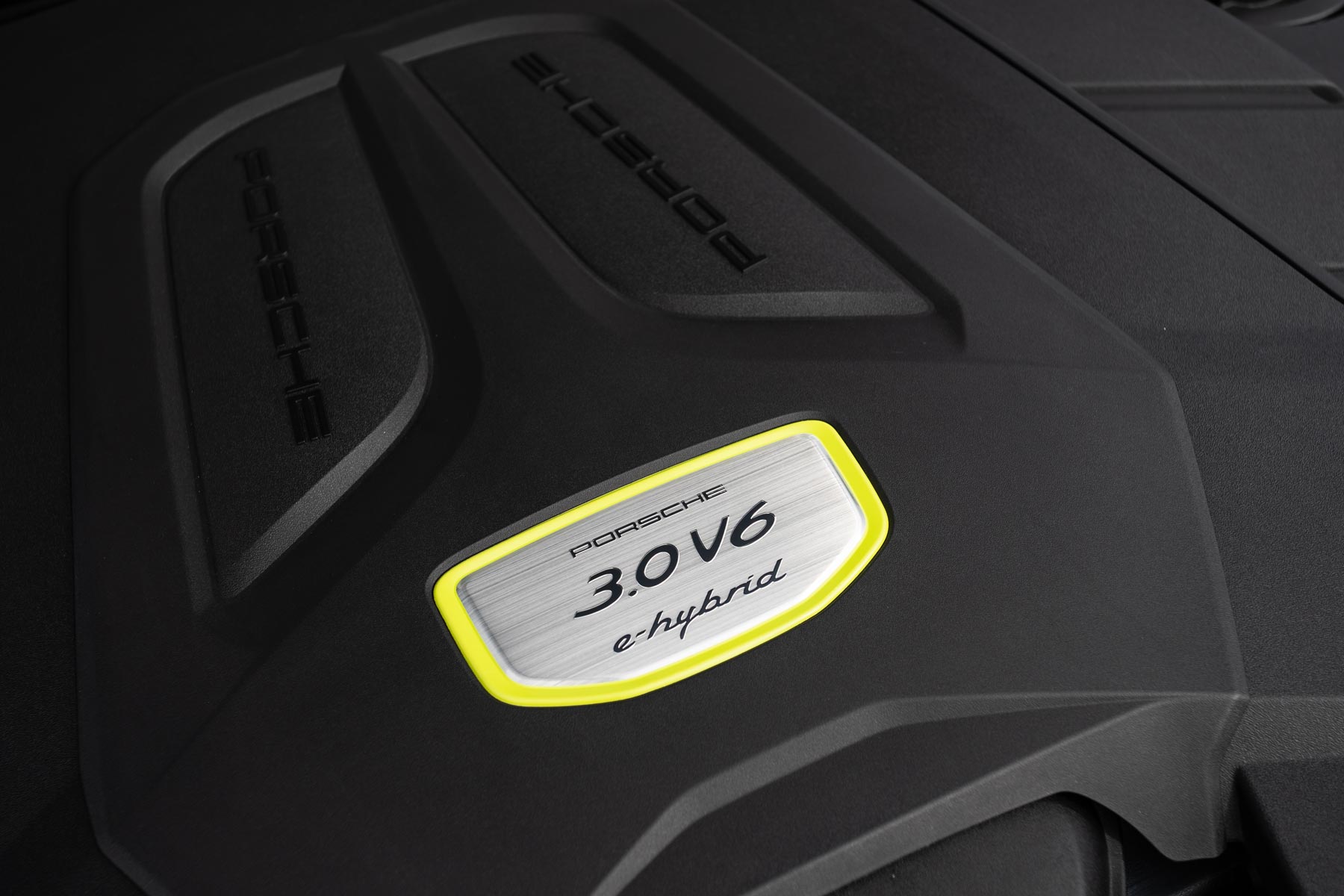 Porsche concedes there will be another diesel-engined Cayenne, but remains tight-lipped on the details. Meanwhile, the Cayenne E-Hybrid is not just a stand-in. It has a balance of economy and performance that’s entirely different to a diesel-engined car. A very good one, in my view.

On a cross-country journey blending town, motorway and winding hilly roads, we got to close to 30mpg, which included the 19 miles we initially ran on electric power alone. Use the Cayenne for a more lively experience and the economy will quickly drop to sub-20mpg, but you expected that really, didn’t you?

The CO2 numbers are pretty meaningless: a little over 70g/km, depending upon the tyre size. That’s not enough get into the London congestion charging zone without paying a fee. 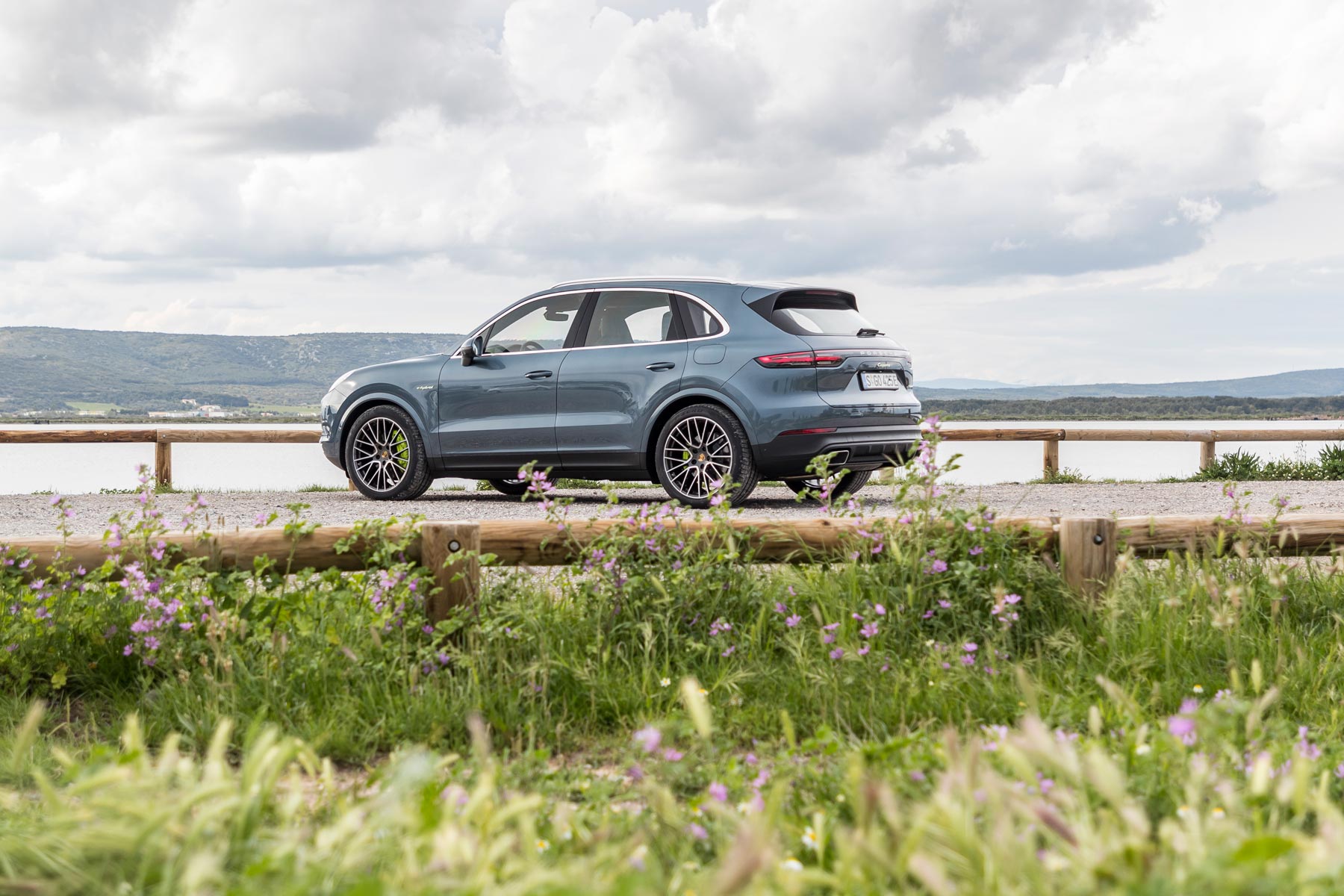 Recharging at home takes 7.8 hours though a regular 13-amp socket, so you’ll probably want to upgrade your charging system to 32 amps, which cuts the time to 2.3 hours for a full top-up. Much can be controlled from the Porsche phone app, including in-car heating.

Porsche is rolling out a new charging service, meaning a whole range of public charging points will be available without registration for each one – Porsche will simply bill you later. That’s got to be the way forward.

Is this the way forward for sporty SUVs? 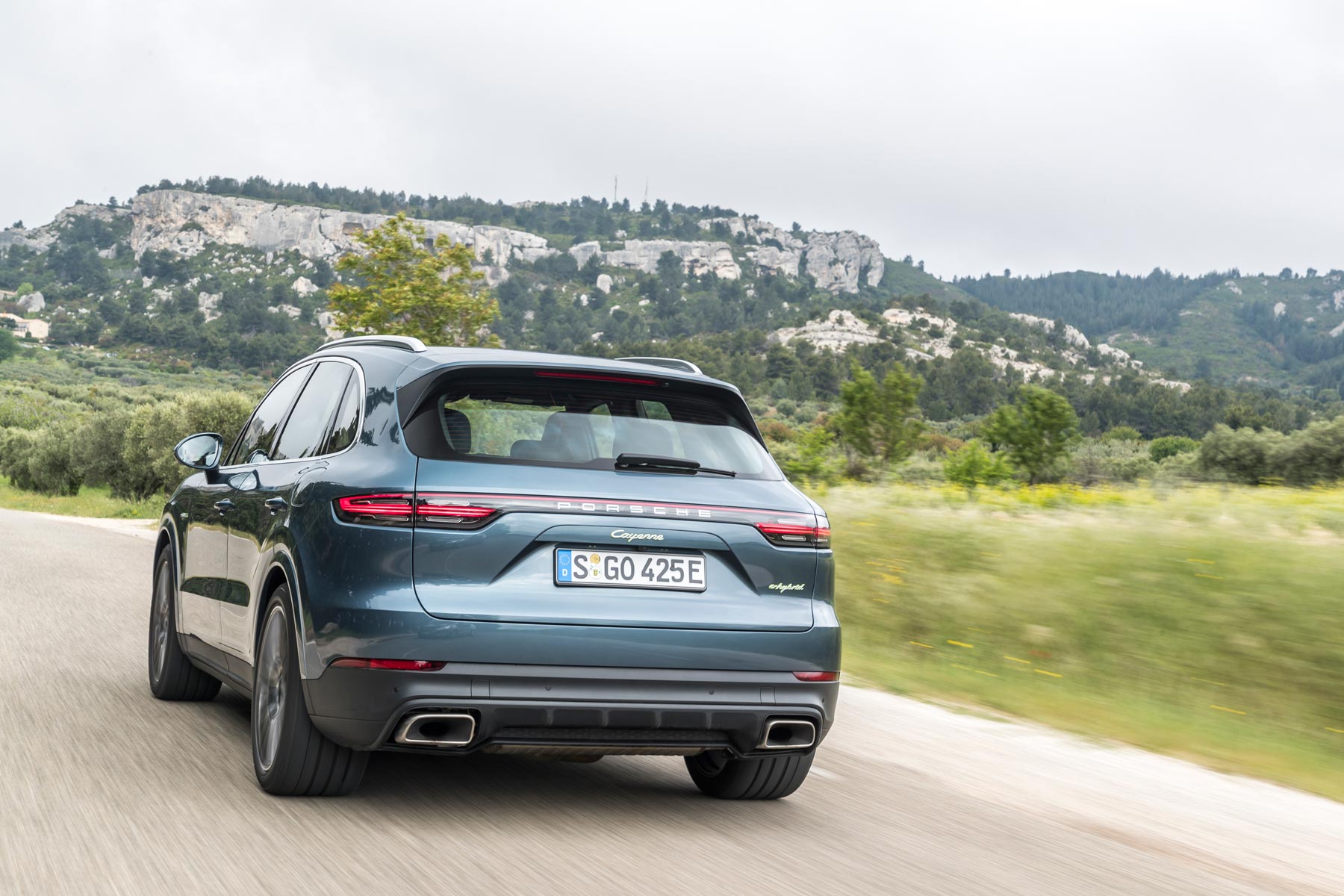 That’s not as outrageous as it might seem. What we have here is a 4×4 that combines stunning performance and agility with more than a nod towards the ever-dominant emissions issues. The Porsche Cayenne E-Hybrid ticks the necessary boxes extremely well.