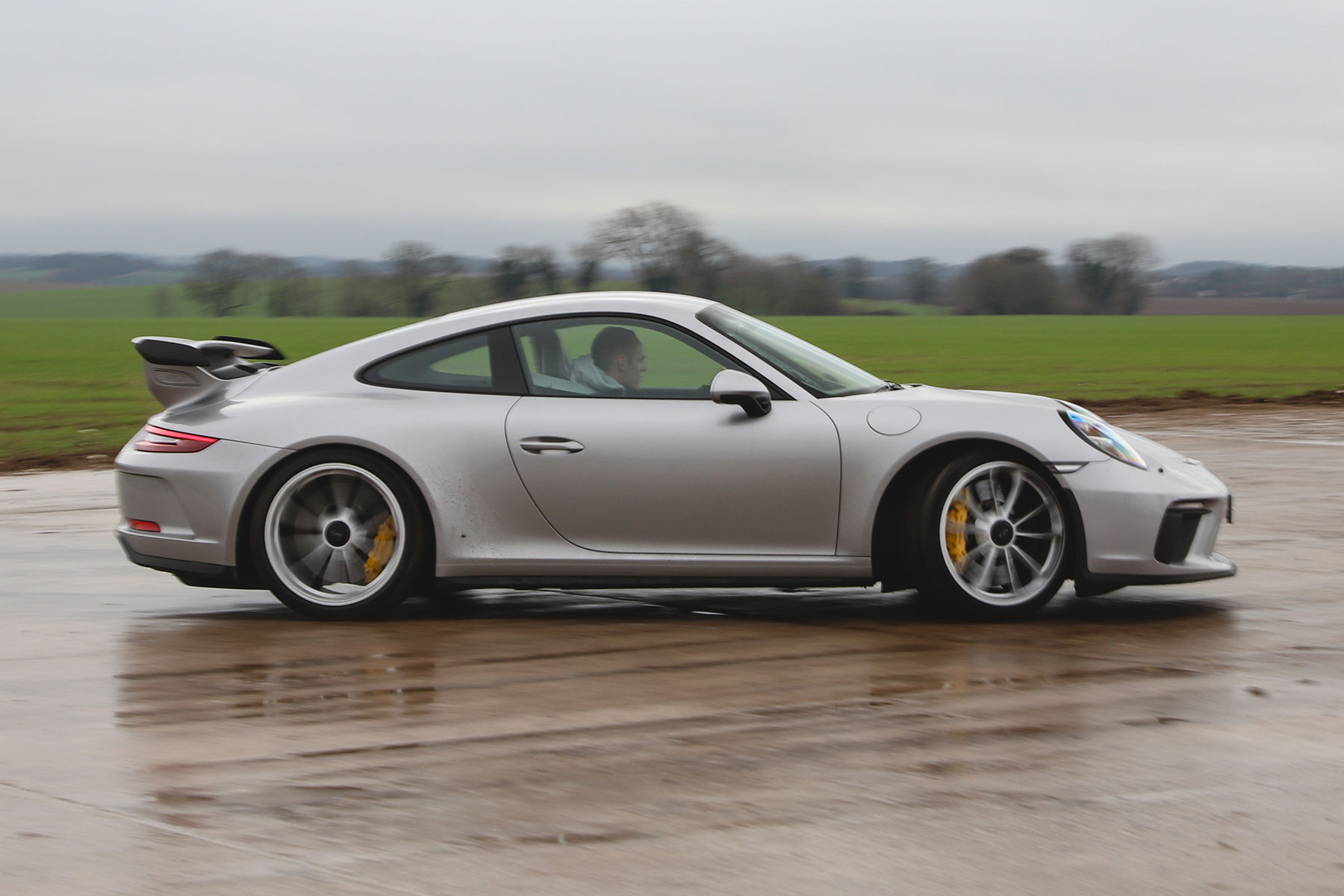 Allow me to start this review in an unconventional manner. Rather than introducing the 911 GT3, explaining what makes it different to any other 911, then looking at everything from the performance to how big the boot is before ending with a conclusion, I’ll jump straight to the latter. If you have £112,000 to spend on a car and really, really enjoy driving, please go and buy a new 911 GT3 right now.

Except, £112,000 is unlikely to buy you a new 911 GT3. It should – it retails at £111,802 – but demand is far exceeding supply. It’s not a limited edition model, but Porsche is producing them more slowly than buyers are filling in order forms. Unless a Porsche dealer owes you a favour, or you’re prepared to stump up a premium to buy one secondhand (some are currently advertised for as much as £190,000), it might be difficult to even get on the waiting list.

Might have found my car of 2018 already. Not only is the GT3 massively competent, it’s also playful and fun in a way 911s rarely are. I love it. pic.twitter.com/szxNwn7e8a

That’s the small print done. Whether you’d like to buy one, can buy one, or simply have a passing interest, how has Porsche gone about making the ultimate, track-focused 911?

Engine-wise, a 4.0-litre naturally-aspirated flat-six from a Carrera Cup car sits over the rear wheels, ready to hit a 9,000rpm redline. With ‘only’ 500hp on hand, the GT3 isn’t, on paper, as well endowed as the likes of the Audi R8. Still, it’ll hit 62mph in 3.4 seconds when combined with the seven-speed dual-clutch PDK auto ’box. 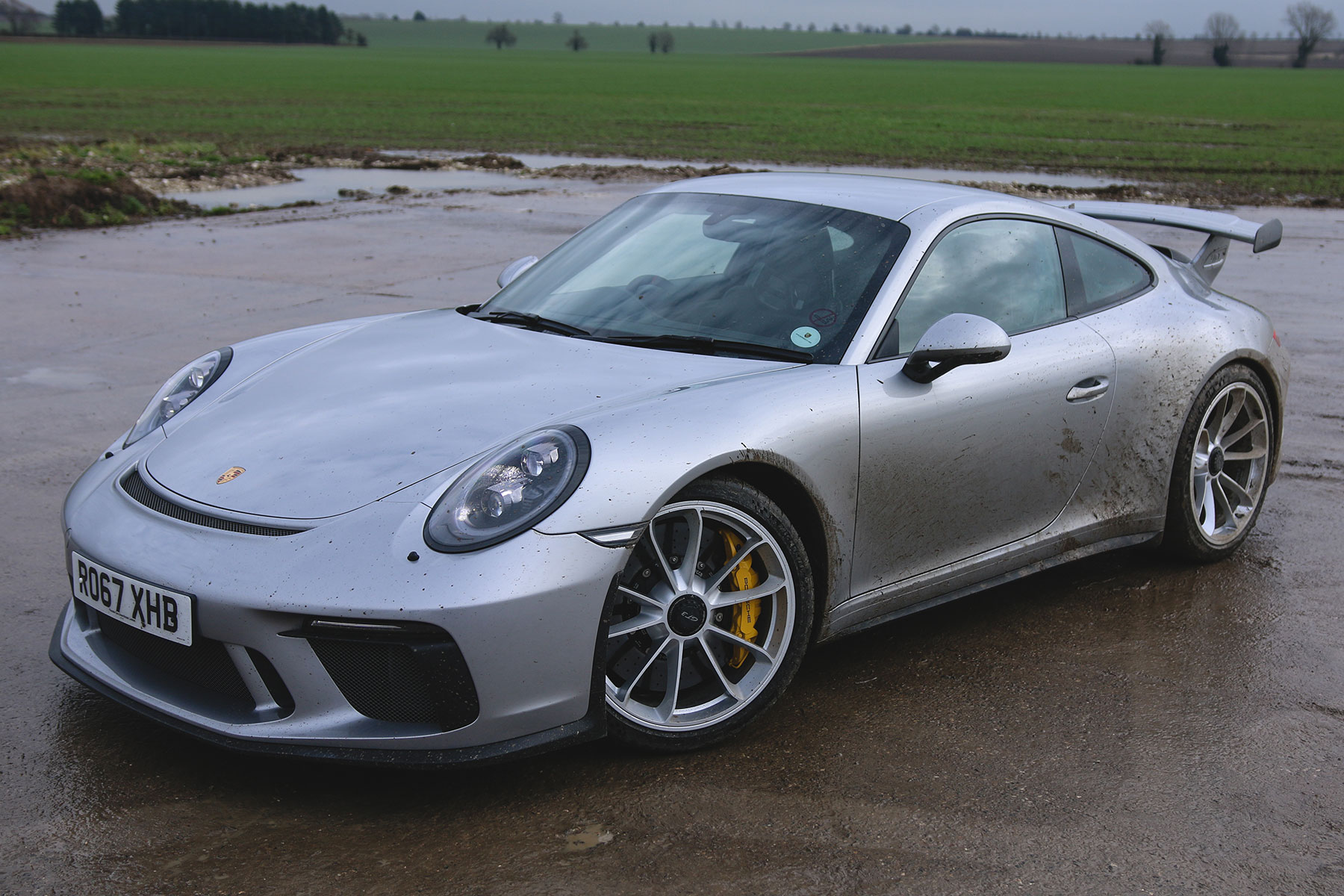 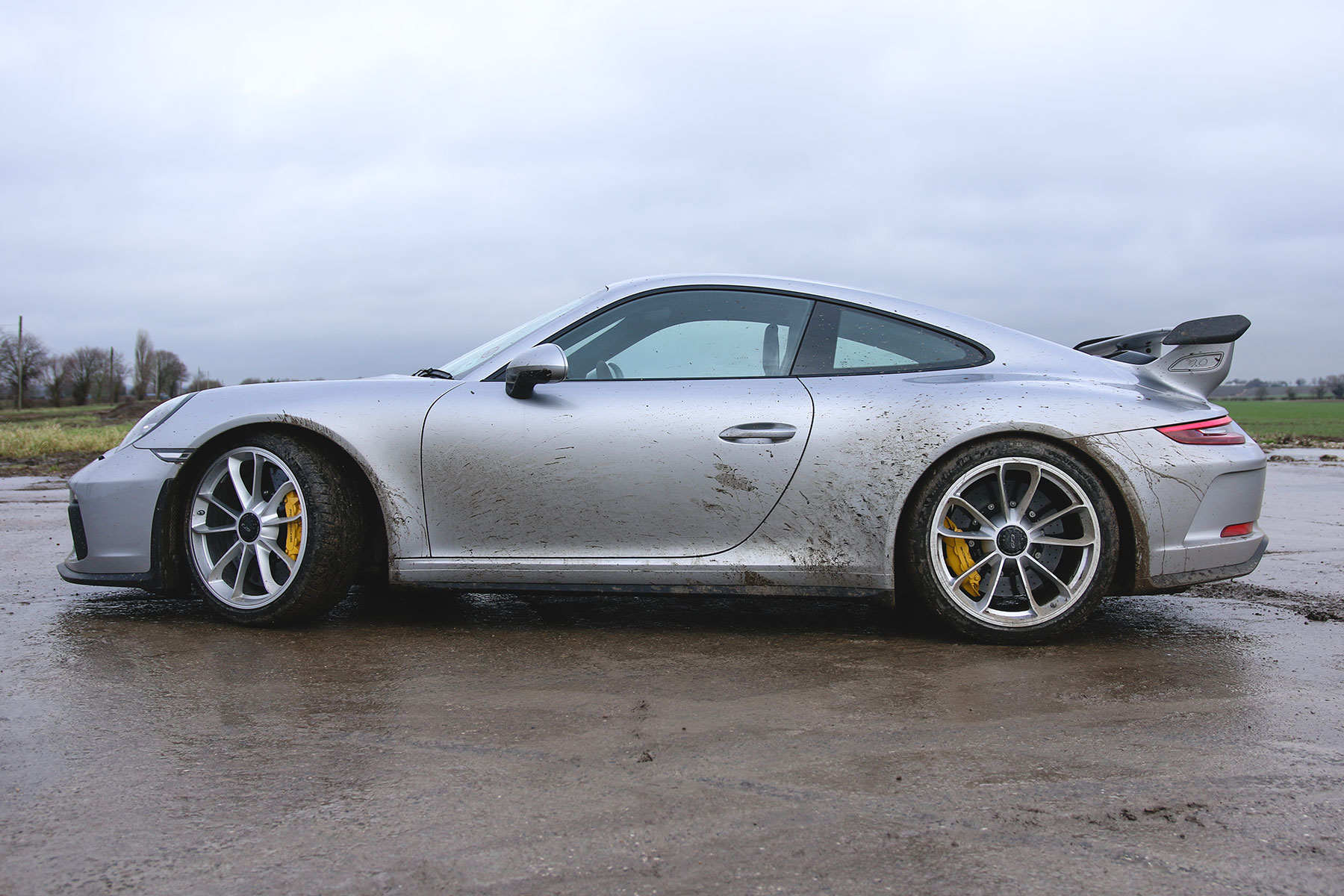 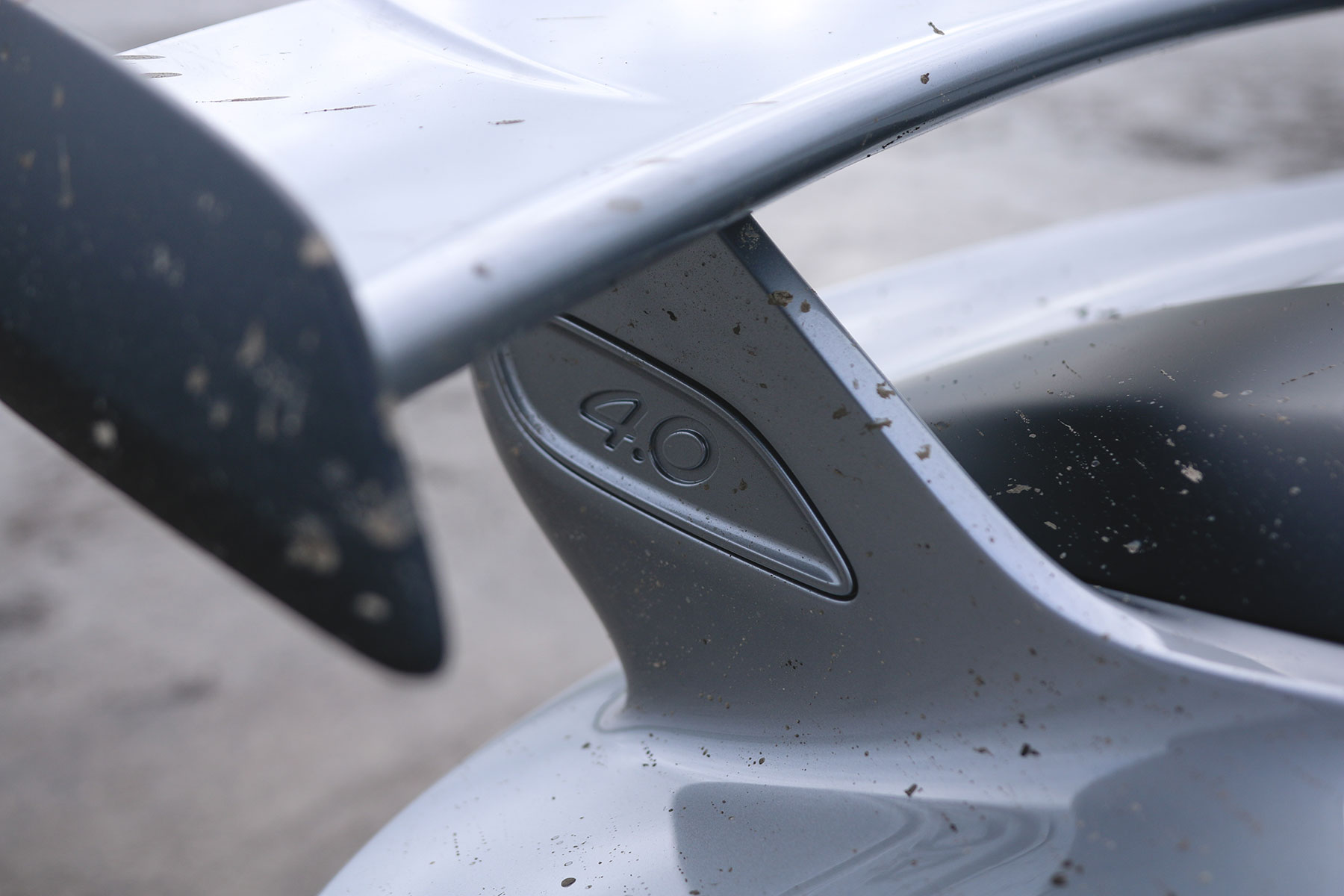 Ah, the gearbox. No matter how sweet Porsche makes its PDK, enthusiasts insist they have more fun twiddling the gearstick and fine tuning their pedal-work. As such, Porsche has given in to pressure and now offers a manual gearbox for the GT3.

As much as I love driving, I’m no purist. Which is good news, as the GT3 reviewed here is of the two-pedal variety. That’s fine with me – especially on a winter morning when it’s my job to drive this £112,000(ish) Porsche on cold, damp roads. I don’t want to make an awkward phone call to the press office, and I’ve got enough to concentrate on without having to master a clutch pedal as well.

The standard-fit Michelin Pilot Sport Cup 2 tyres add to the excitement. When cold, they offer little in the way of grip, even with that 4.0-litre flat-six working with gravity to prevent them spinning up. Drive it sensibly, however – as boring as that may sound – and the 991.2 GT3 (to give it its full title) isn’t remotely intimidating. Yes, ask too much of the tyres and you’ll have to be quick with your reactions, but unlike many rear-drive supercars, it’s not terrifying to drive down a real-life British B-road in the wet.

Anyway, that engine. It’s pure euphoria. It’ll surge forward in practically any gear, but pull the left-hand paddle and the PDK ’box will drop to the lowest suitable ratio and, if there’s grip, you’ll get a punch in the stomach strong enough to pin you there as the revs build and build and build. It’s an addictive pleasure, and one that sounds glorious, but it could very easily cost your licence if you don’t have enough self-discipline.

With some warmth in the rubber, the GT3 encourages you to take liberties. There’s only the slightest touch of understeer as you load up the tyres through a mix of speed and steering input (trail braking helps), but the rear wheels turn a fraction to wipe out understeer and egg you on, increasing your confidence each time. Accelerate through the bend and revel in the steering wheel feeding through the subtlest of signals about just how much harder you can push it.

On the standard 20-inch centre-lock wheels with the adaptive dampers left in Normal mode, the ride is firm but stops short of being harsh (stiffening it up is best left for the track). Our car is kitted out with ceramic brakes at a cost of £6,498, meaning speed can be scrubbed off even quicker than the flat-six piles it on, and we expect they could easily cope with a track day without showing any signs of fading.

Bucket seats are another option box ticked at a cost of £3,324, providing a surprising amount of comfort as long as you’re the right size for them. They also give incredible levels of support but, like all GT3s, you’ll have to leave rear passengers at home. While there’s space for them, the back seats have been removed to save weight. 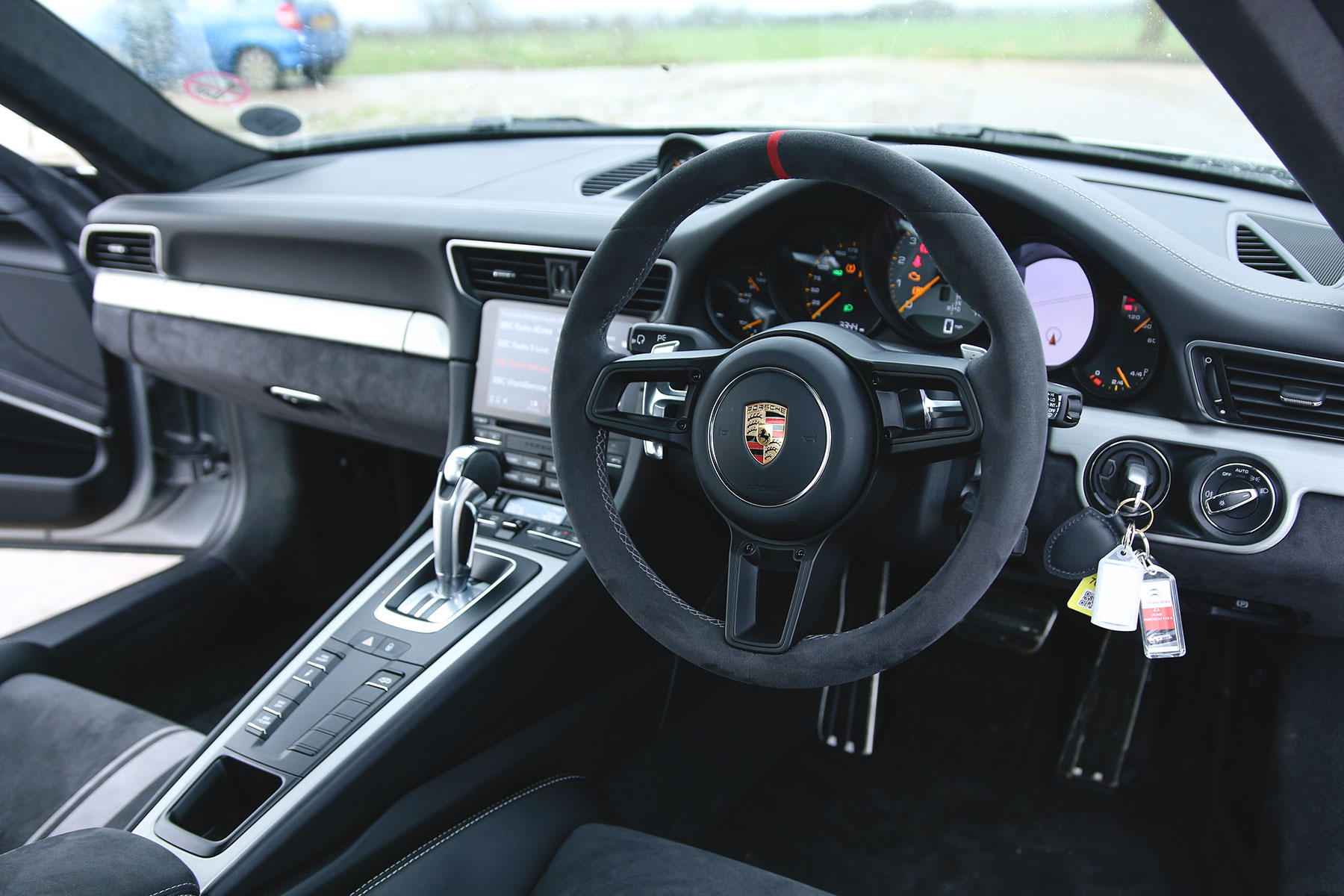 Seats aside, the rest of the cabin is standard 911 fare. Driving any 911 feels special because of its low-down driving position and Porsche-unique features (from the 911-shaped key to the centre console with its various buttons and blanking plates). The Alcantara-wrapped steering wheel helps the race-car feel, as does the little red stripe at the 12 ‘o’ clock position (a £168 option).

If you want a GT3 with a little more in the way of comfort, you can opt for the Touring Package for no extra cost. Inside, this replaces all the Alcantara with leather, while on the outside it swaps the massive rear wing with a more subtle pop-up device. It’s where my money would go, except the Touring isn’t available with the PDK ’box. A strange decision, perhaps, as the Touring seems the obvious choice for people who like their 911 a little less ‘race car’, but Porsche says it’s meant to appeal to purists. And purists like manual gearboxes.

Whether you choose the Touring or standard GT3, if you’re in a position to spend £111,802 on one of the most desirable 911s ever, I envy you. It’s a much more thrilling drive than any 911 I’ve driven before, but manages this without being intimidating or too hardcore for winter days in Britain. And, at nearly £30,000 less than rivals such as the Audi R8, it’s also a bit of a bargain. 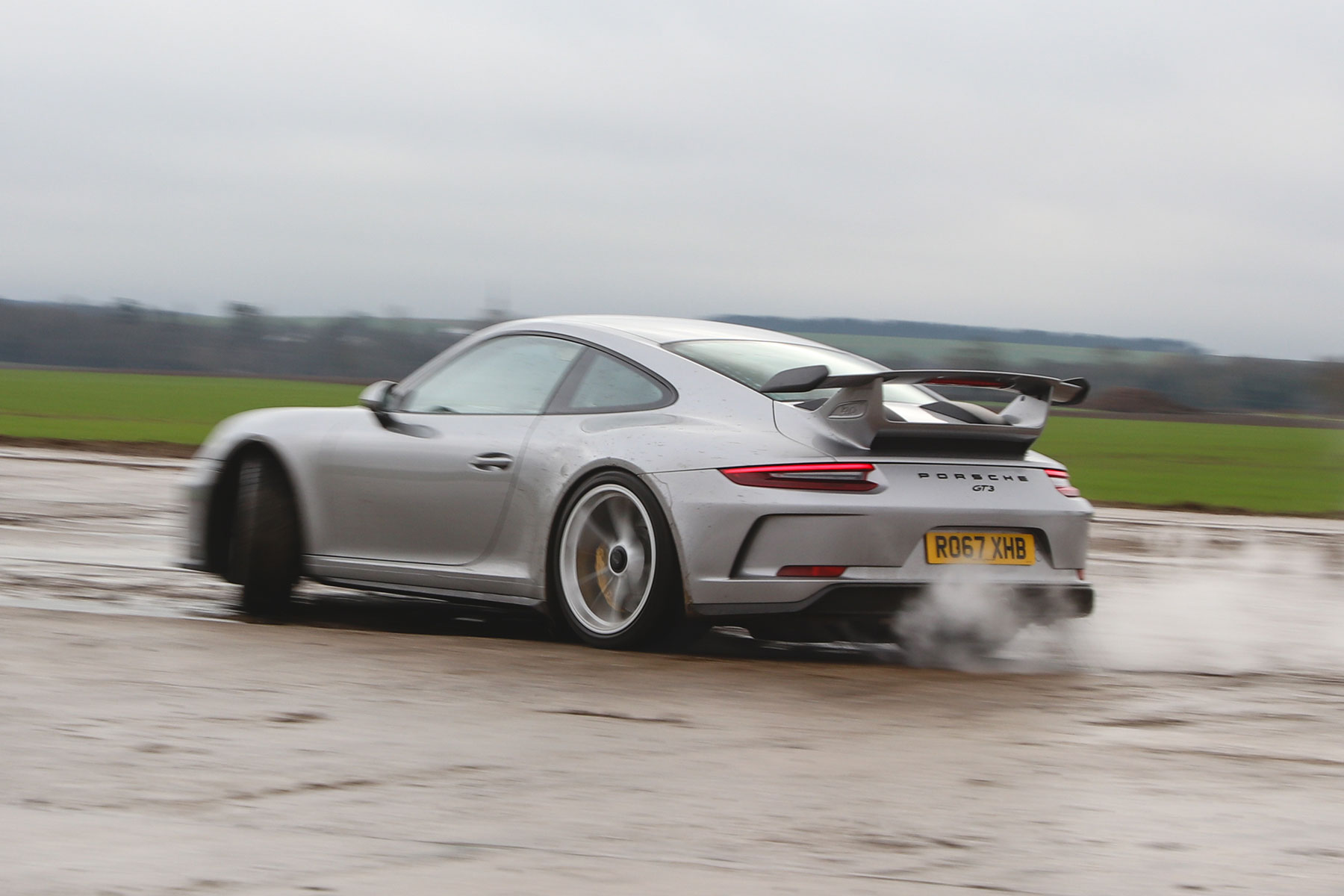