In pictures: classic Jaguars for the road and racetrack

We visit the showroom and workshops of Woodham Mortimer, a world-leading specialist in classic Jaguars and historic motorsport 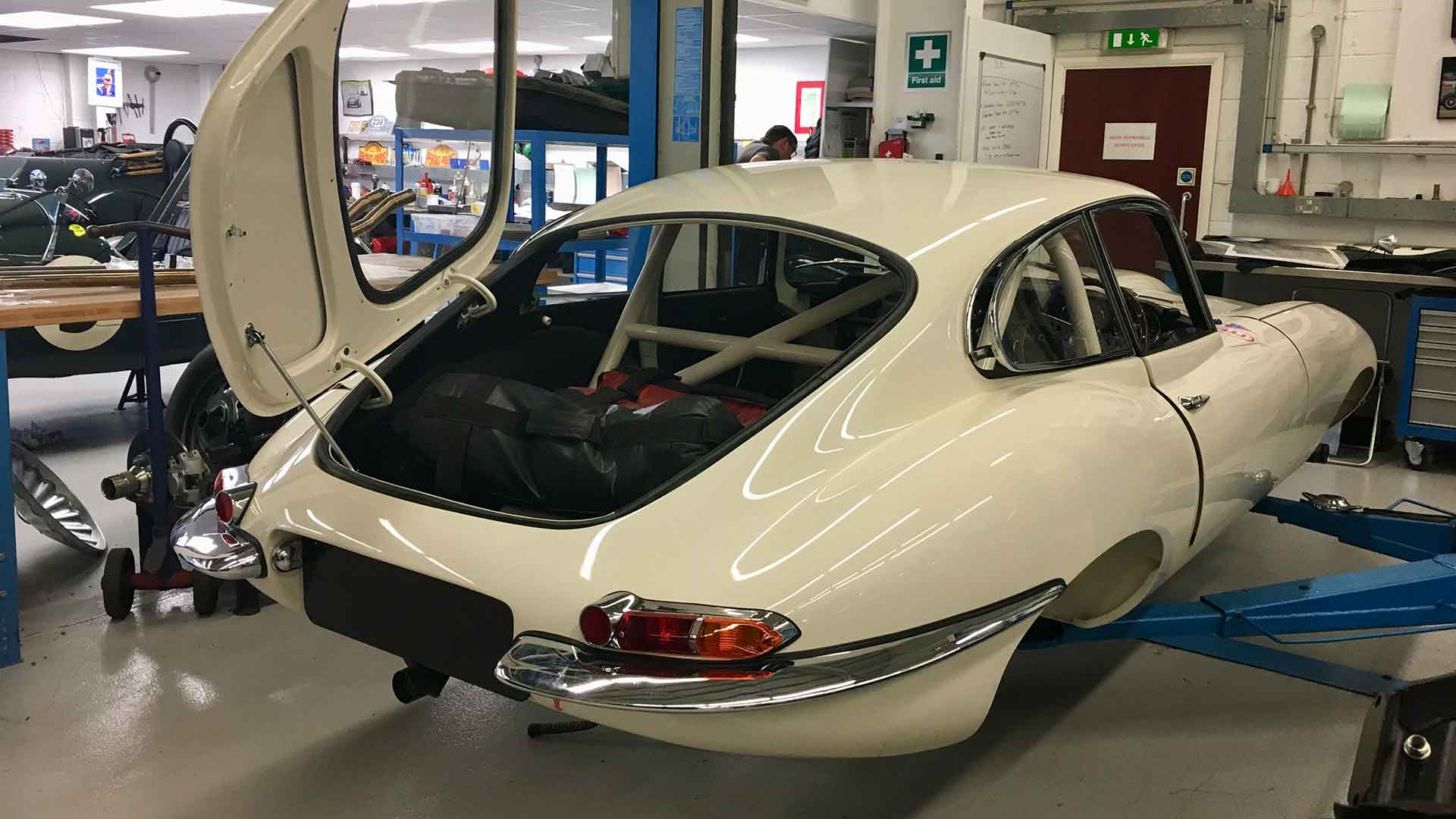 In the workshops of Woodham Mortimer, the 21st century has yet to happen. You’ll find no laptops or plug-in fault-finders here, just skilled craftsmen milling parts from raw and shaping body panels by hand. The 60-strong team has restored hundreds of road and race cars, with a particular focus on classic Jaguars.

If you stroll across a concours lawn this summer, or watch historic motorsport, you’ll probably see the company’s cars. They have won trophies at Pebble Beach, Salon Privé, Monaco Historique, Goodwood Revival and more. Here are our highlights from the showroom – followed by a gallery of work-in-progress photos from the workshops. 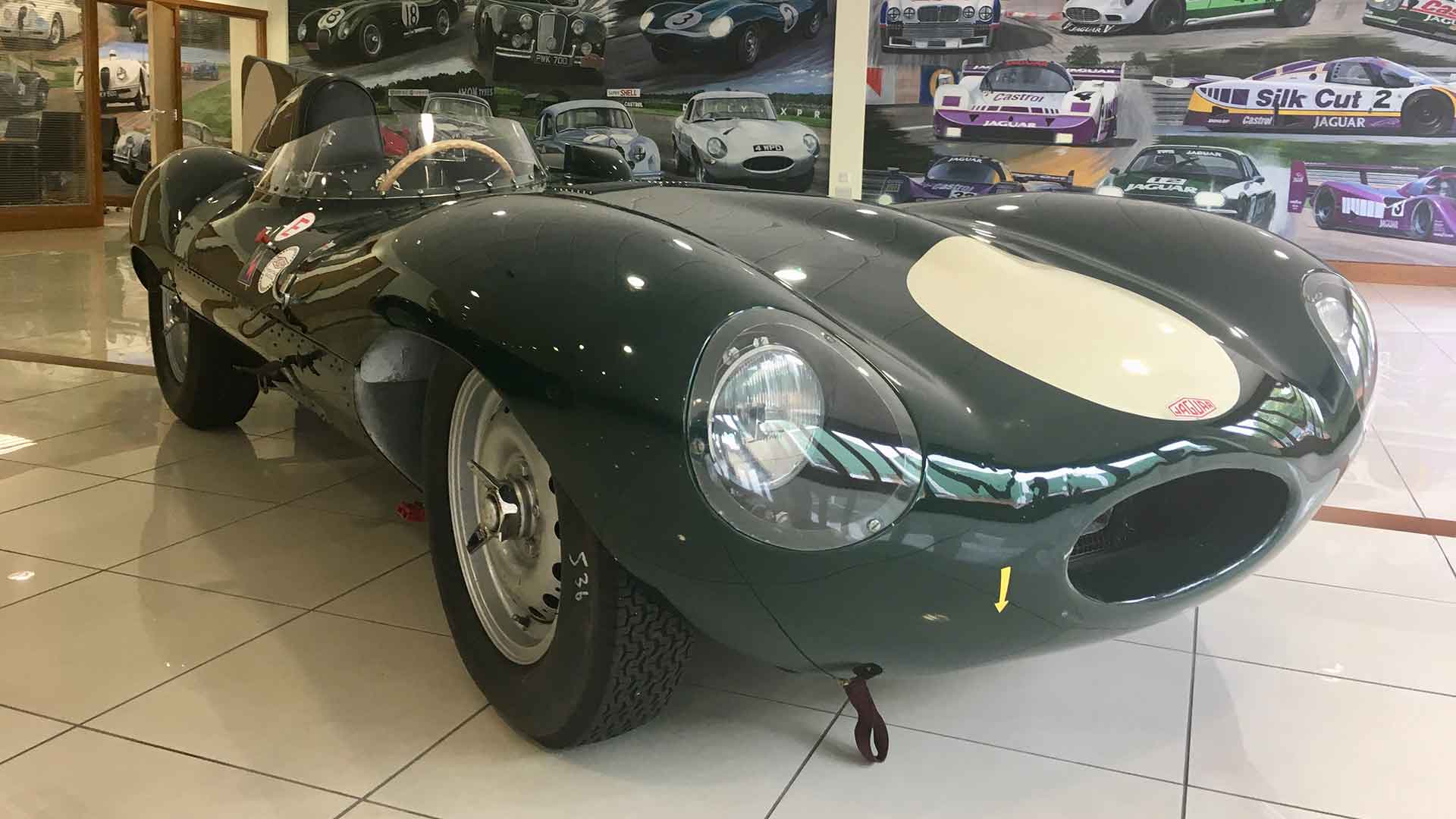 One of Jaguar’s rarest and most valuable cars, the D-Type was designed to win Le Mans – and did so three years running, taking five of the top six places in the 1957 race. Famous drivers included Mike Hawthorn and Briggs Cunningham, while the cars frequently wore the blue and white livery of privateer Scottish team Ecurie Ecosse.

The D-Type was powered by a straight-six engine that ranged from 3.0 to 3.8 litres in capacity. It reached 172.8mph on the Mulsanne Straight, helped by an aircraft-inspired vertical stabiliser fin to boost stability at speed. Just 71 cars were built, plus 16 later converted to XKSS spec (see below), and survivors are worth well into six – or even seven – figures today. 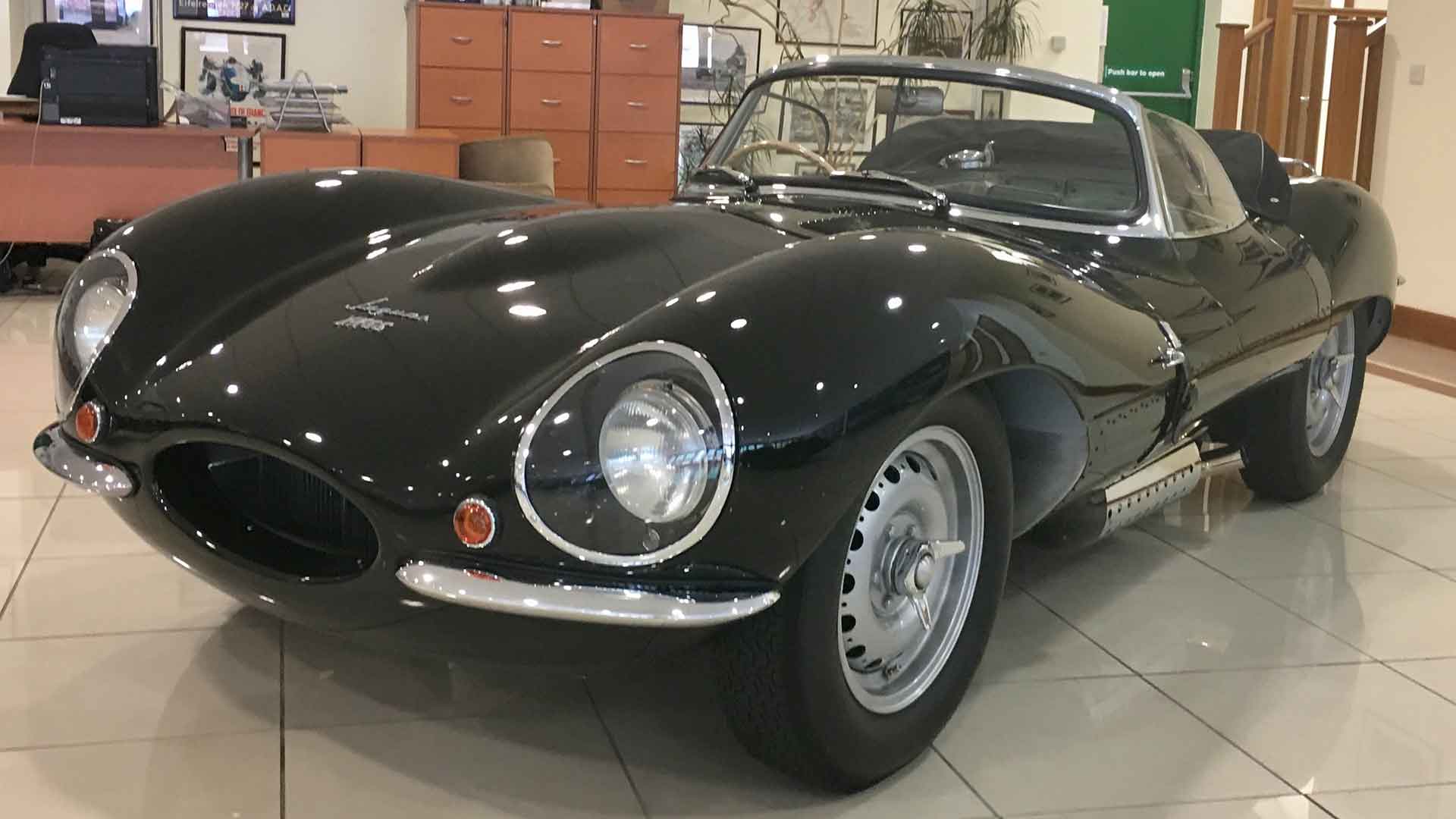 After the D-Type retired from racing, Jaguar was left with 25 unused chassis. These were converted for sale as road cars, badged XKSS. Modifications included a full-width windscreen, fabric roof, chrome bumpers and a passenger-side door. The vertical stabiliser was also removed from the rear deck.

A fire at the Browns Lane factory destroyed nine cars, so only 16 were sold in-period. In 2016, however, Jaguar announced a run of hand-built XKSS recreations, using the leftover nine chassis numbers and priced at circa. £1 million each. The car seen here is a ‘tool room copy’ – built by Pearsons Engineering using an original XKSS as a template. 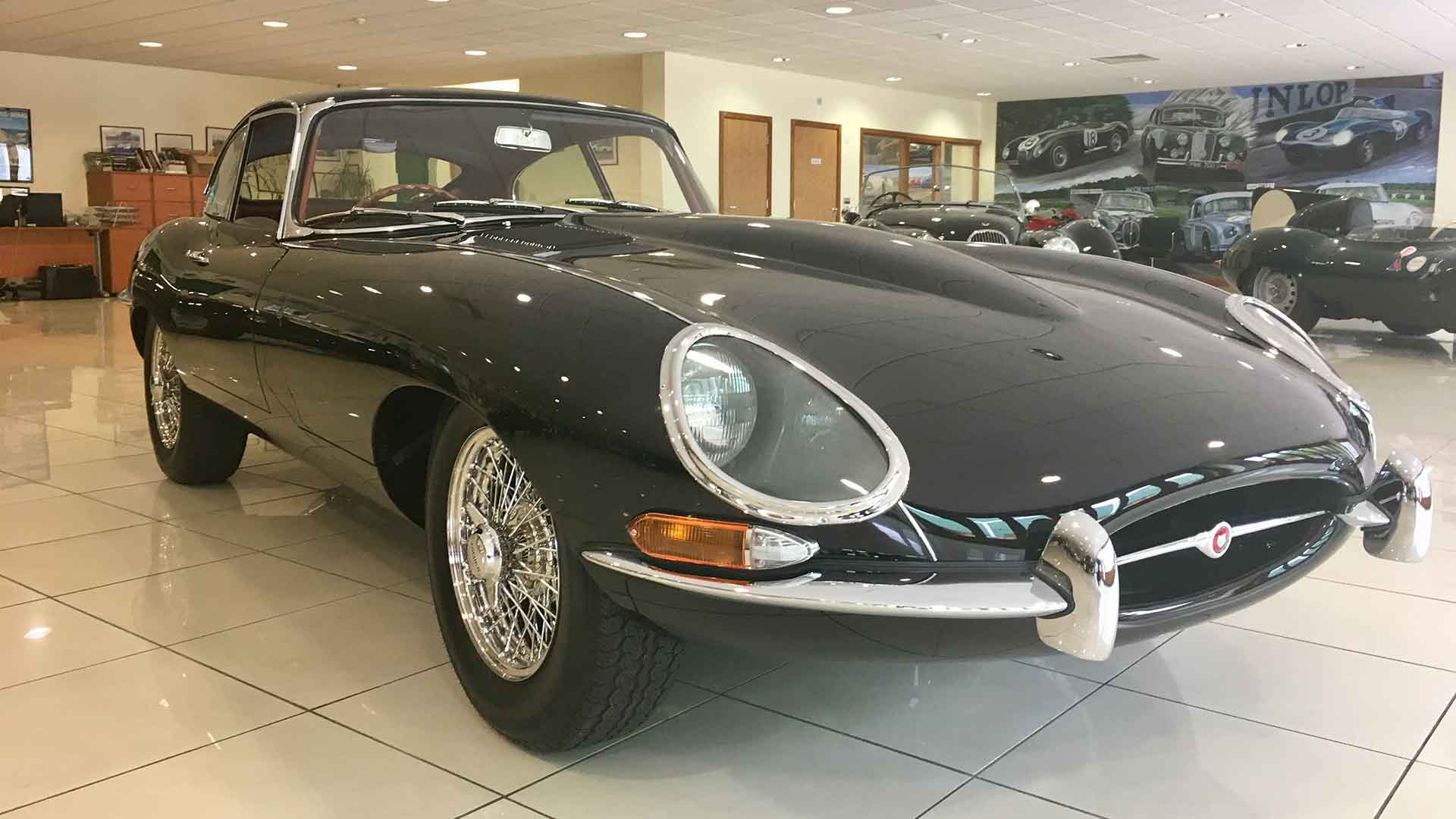 A recent poll declared the E-Type the greatest classic car of all. Seeing one in person, it’s hard to argue. Voluptuous and instantly iconic, the car caused a sensation when launched in 1961. It was a huge leap forward from the XK, with a monocoque chassis, independent suspension and disc brakes. A 150mph top speed grabbed headlines, too.

This restoration of this E-Type FHC was managed (under supervision) by one of Woodham Mortimer’s apprentices who has recently graduated. Upgrades include electronic ignition and an electric cooling fan for improved reliability, plus a five-speed gearbox, power steering and uprated suspension and brakes for better road manners. Originally sold in the US (where the E-Type was named XK-E), it has since been converted to right-hand drive. 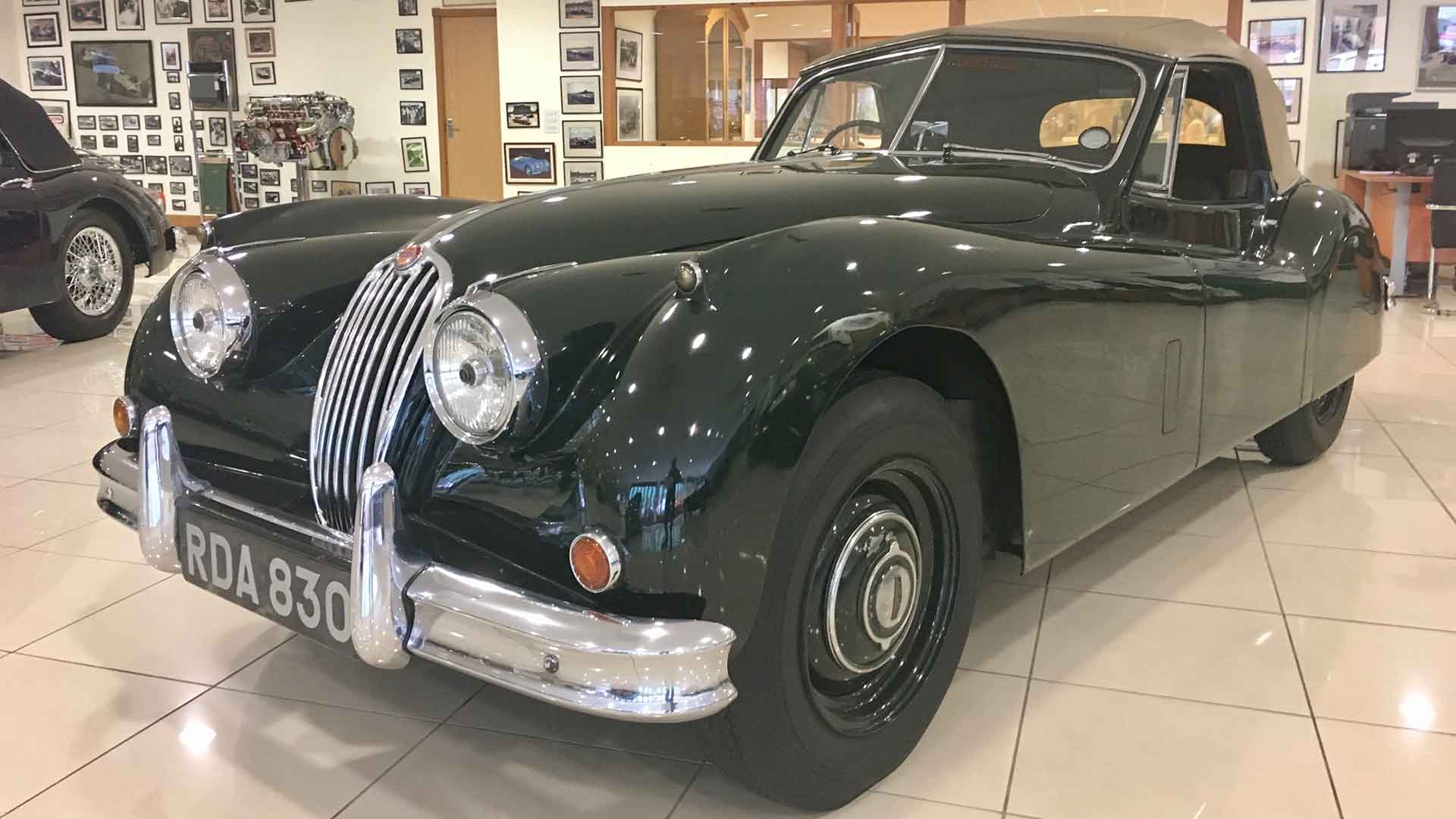 Following the XK120 was never going to be easy, so Jaguar played it safe. The XK140 of 1955 was a sensible evolution, with better brakes, rack and pinion steering and a roomier interior. Its 3.4-litre straight-six produced 193hp, or 213hp in SE-spec. Reflecting its shift from no-frills sports car to accomplished grand tourer, the XK140 was the first Jaguar offered with an automatic gearbox.

This British Racing Green XK140 DHC (drophead coupe) has remained in the same family since new, and never been restored. Its paintwork is beautifully patinated, while its Suede Green interior has a musty smell of heritage. The odometer shows just 30,460 miles. 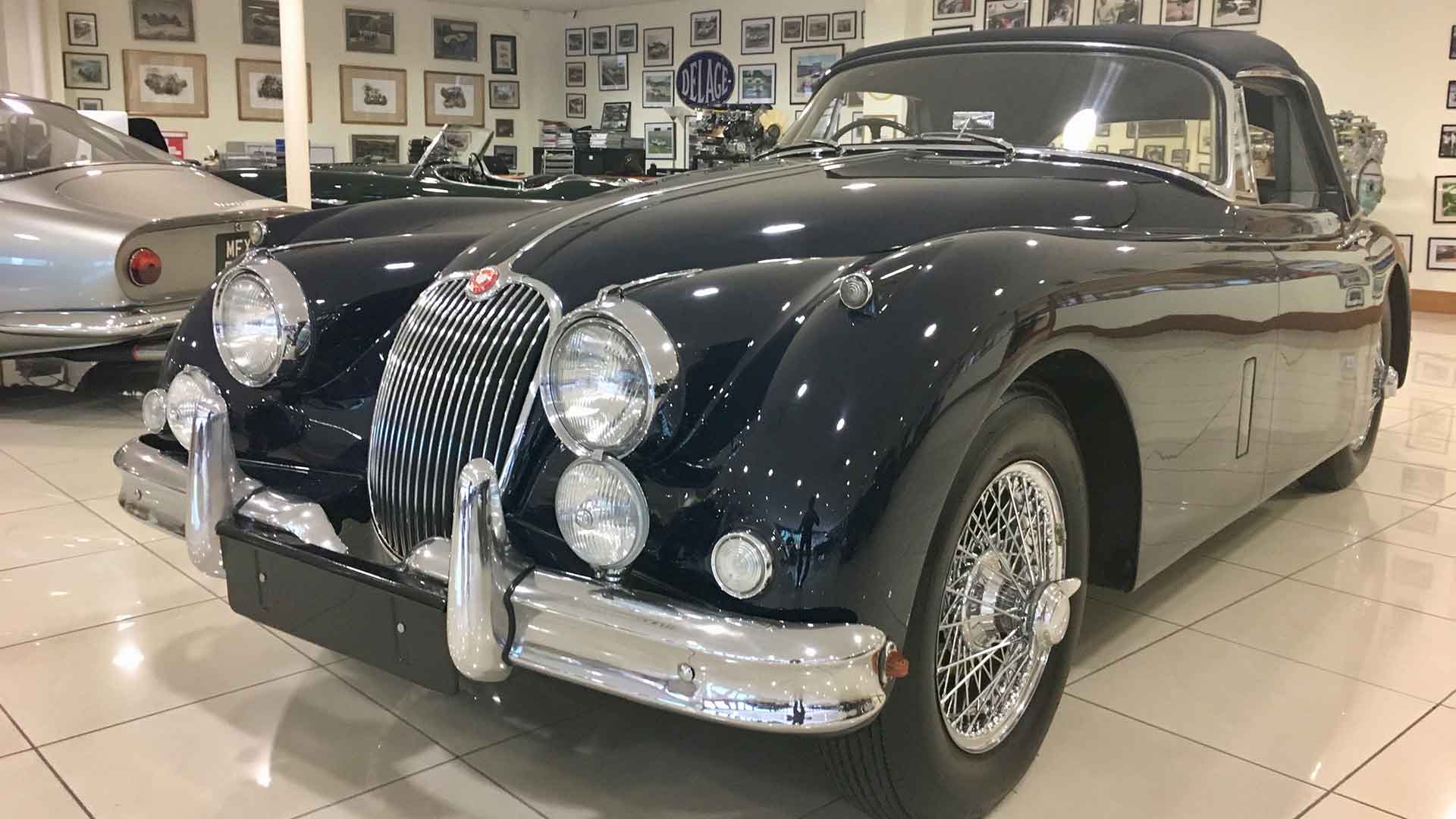 A further development of the XK120, the XK150 debuted in 1957 with a one-piece windscreen, leather-trimmed dashboard and tell-tale indicator lights atop the wings. In 1960 – the final full year of production before the E-Type arrived – the 3.8-litre engine from the Mark X saloon was introduced, boosting output to 223hp. Like its predecessor, the car was available in FHC and DHC guises, both with token rear seats, or as a two-seat Roadster.

A life spent mostly in Italy is perhaps why this XK150 SE DHC is so perfectly preserved. The Indigo Blue paint is the same shade it wore when in 1959 and the original seat trim has been preserved. The car returned to the UK in 2017. 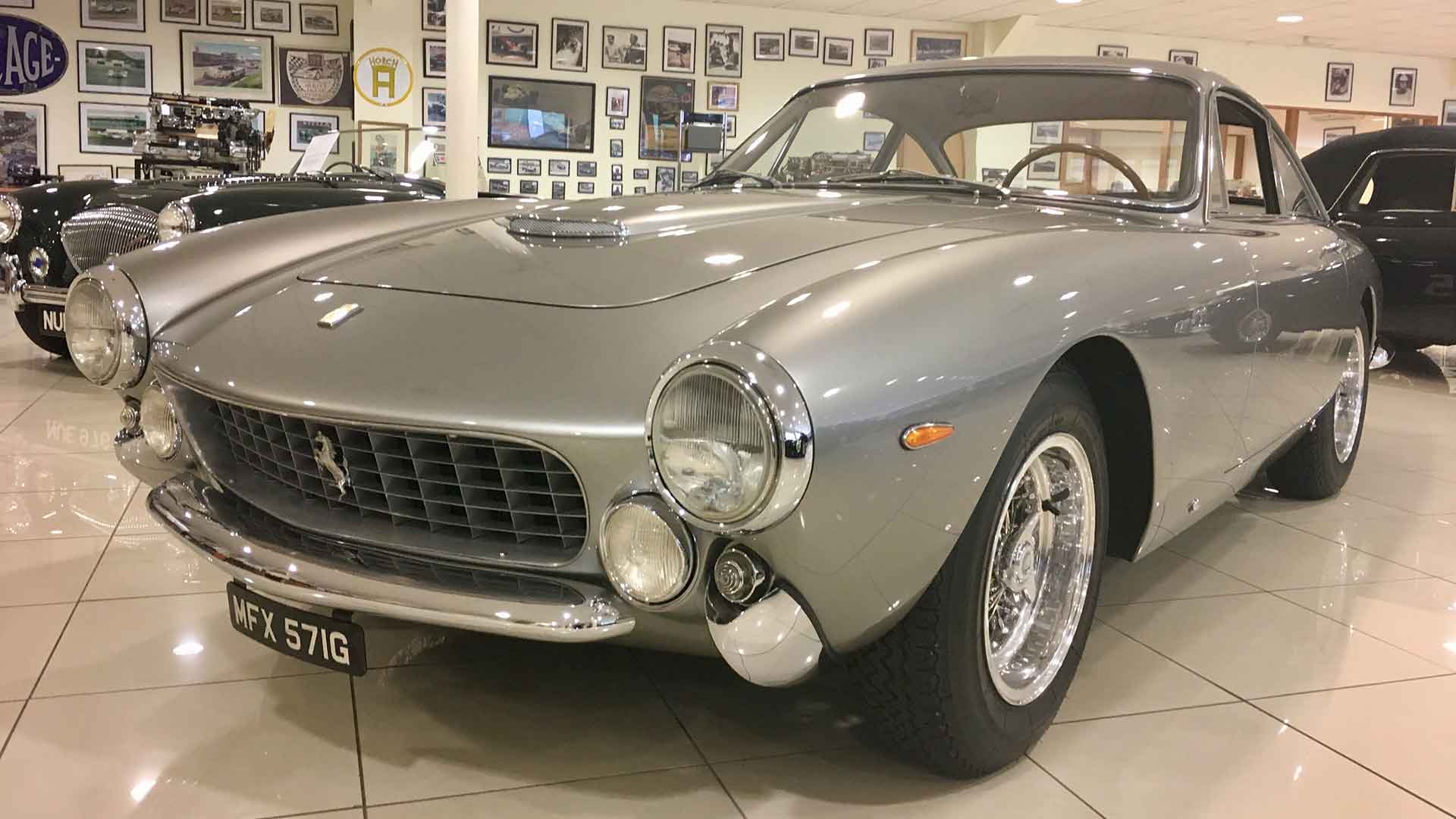 It wasn’t all Jaguars at Woodham Mortimer; this Ferrari 250 GT Lusso was among the stars of the showroom. It’s one of Maranello’s most elegant cars, designed and driven by Battista Pininfarina himself. Launched in 1963, it was also the last of the 250 series, a decade-long bloodline that includes legendary models such as the 250 LM and 250 GTO.

Unlike those competition cars, however, this two-seat GT was intended solely for the road. Its 3.0-litre Colombo V12 develops 240hp – good for 0-62mph in less than eight seconds and 150mph. Only 351 Lussos were made before the car was replaced by the 275 GTB. Today, you’ll need millions in the bank to buy one. 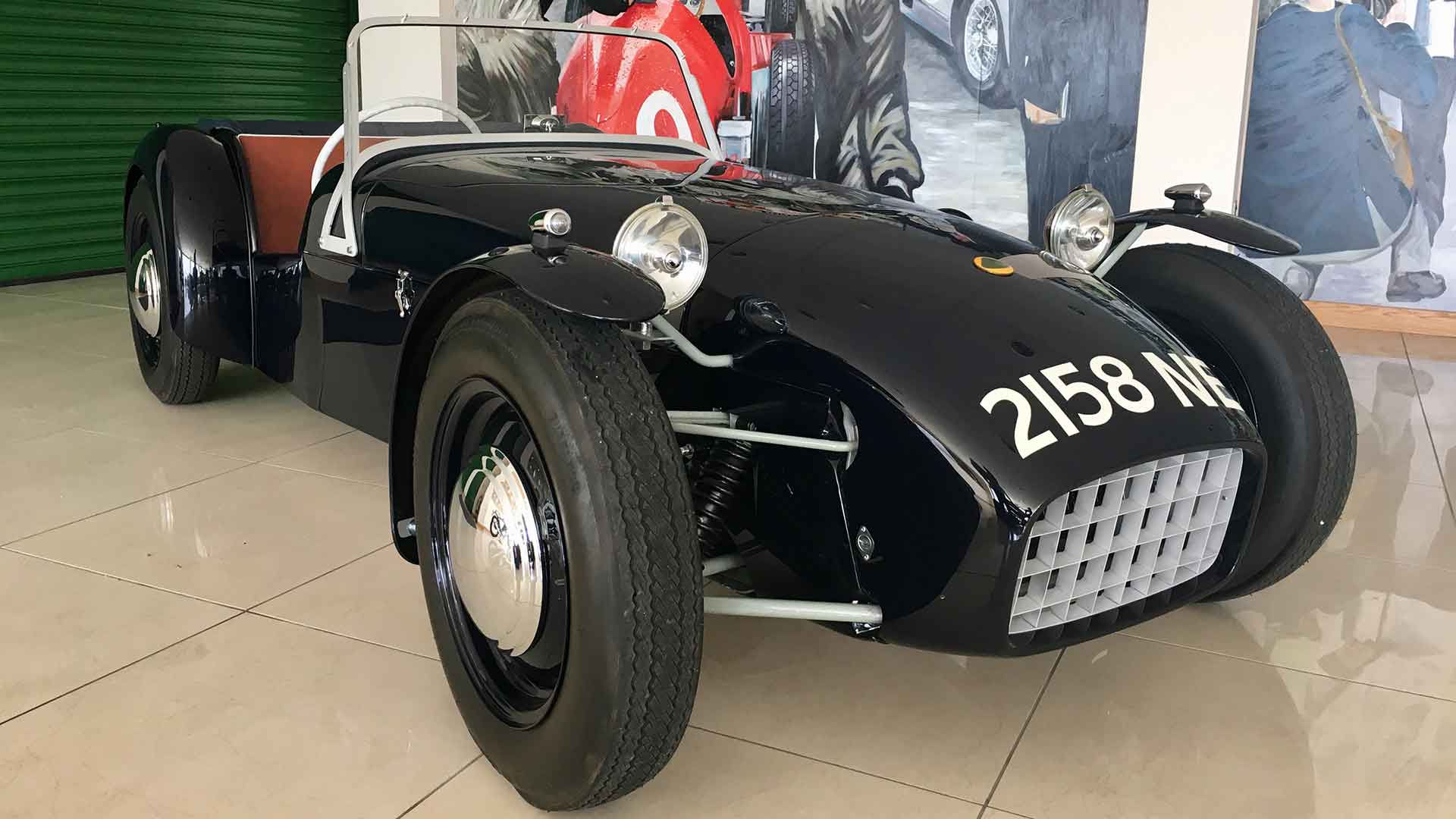 Has there ever been a purer sports car than the Seven? It exemplifies Lotus founder Colin Chapman’s ‘simplify, then add lightness’ credo, with aluminium body panels, fabric doors and a rudimentary roof. Early cars mustered just 49hp from a side-valve Ford engine, but a kerb weight of 500kg meant swift acceleration and agile, immediate handling. It was available in kit form, so many buyers saved money and built the car themselves.

Production of the Lotus lasted from 1957 to 1973. However, its legacy lives on in the Caterham Seven, which remains on sale today. This restored example shows just how basic the original car was. The bench-style seats offer no support whatsoever, ventilation comes via the open roof and in-car entertainment relies on your right foot.

Wonders of the workshop 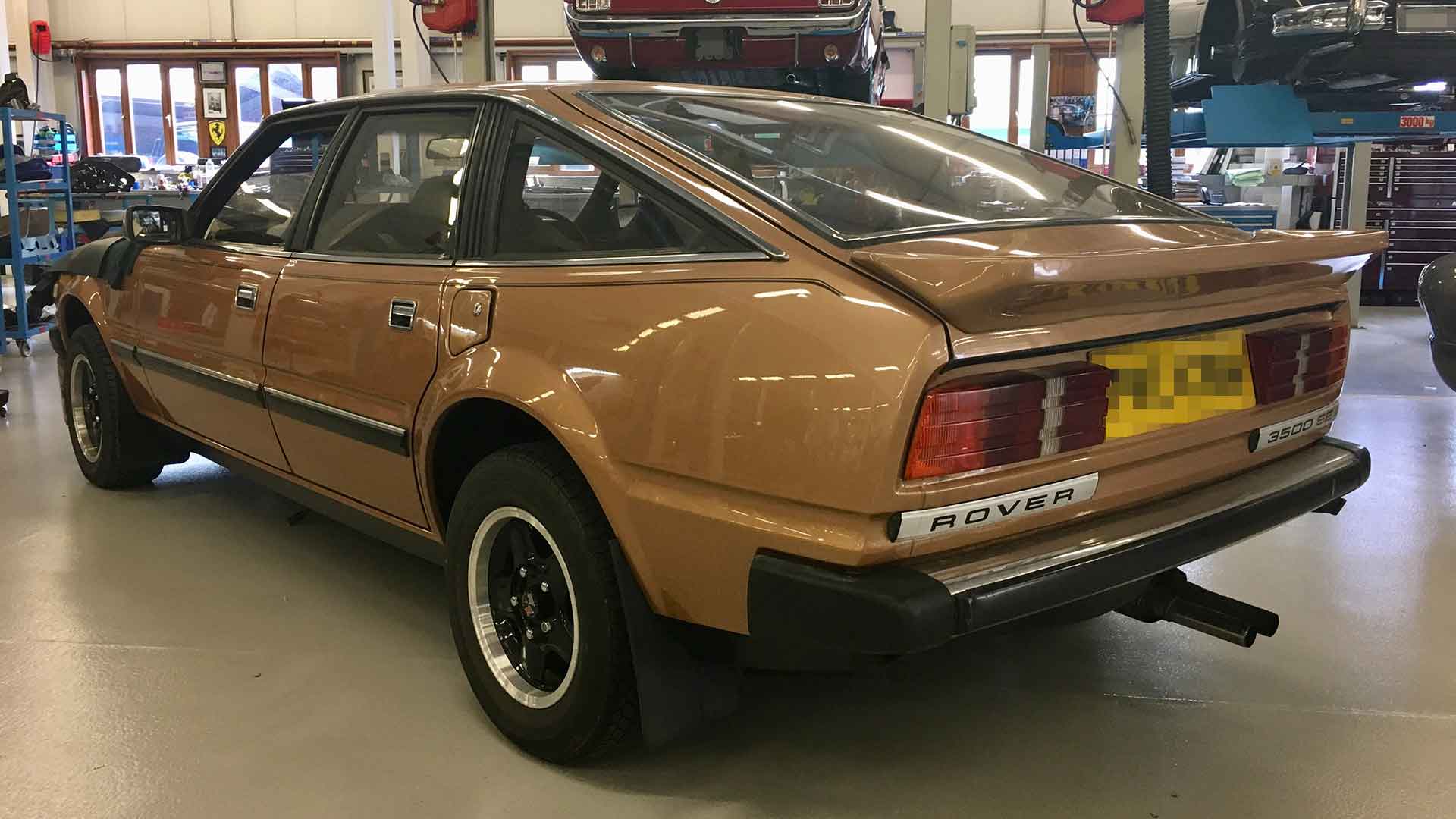 After ogling the cars in the showroom, sales manager Stuart Batchelor takes me for a wander around the workshops. Here, cars are either restored to concours specification, uprated to ‘restomod’ spec (like the E-Type above) or prepared for the racetrack. It can be a painstaking process, but a full trophy cabinet is testament to the team’s success.

Among the eclectic mix of machines, I spot a Chevy V8-engined Rover SD1 (pictured), Mercedes-Benz 300 SEL 6.3, BMW 507, Maserati Mistral Spyder and Heinkel Trojan bubble car. There’s also a bright red Jaguar E-Type 4.2 FHC that previously belonged to Sir Jack Brabham and is mid-way through restoration. Click through the gallery below to see more.