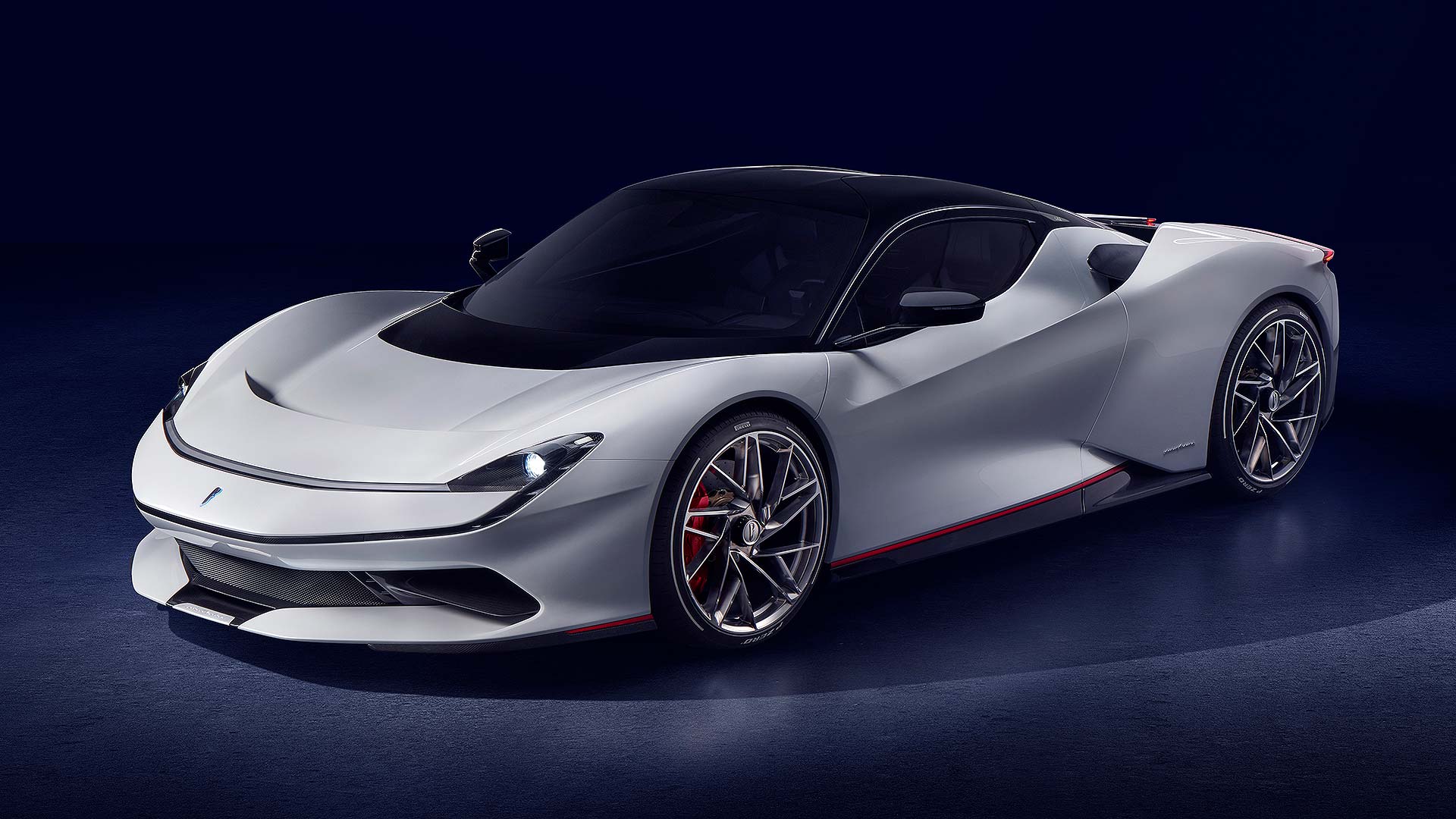 The Pininfarina Battista is a glamorous new entrant into the global hypercar market, one targeting Ferrari, Aston Martin and the ultra-exotic Pagani and Koenigsegg brands with a mix of incredible power and all-electric allure. Producing 1,900 horsepower and faster than a Formula 1 car from 0-60mph, it will also travel almost 280 miles on a single charge.

Only 150 will be built, all in Italy, carrying a rumoured £2 million price tag. Deliveries begin in 2020.

Revealed in an event on the eve of the 2019 Geneva Motor Show, an all-star team was on hand to launch the Battista. Pininfarina says key members have previously worked on launching the Bugatti Veyron and Chiron, Ferrari Sergio, Lamborghini Urus, McLaren P1, Mercedes-AMG Project One, Pagani Zonda and Porsche Mission E. The Battista is a car that’s more than a measure for them, says the bullish team behind the project…

Why, hello there, Automobili Pininfarina! 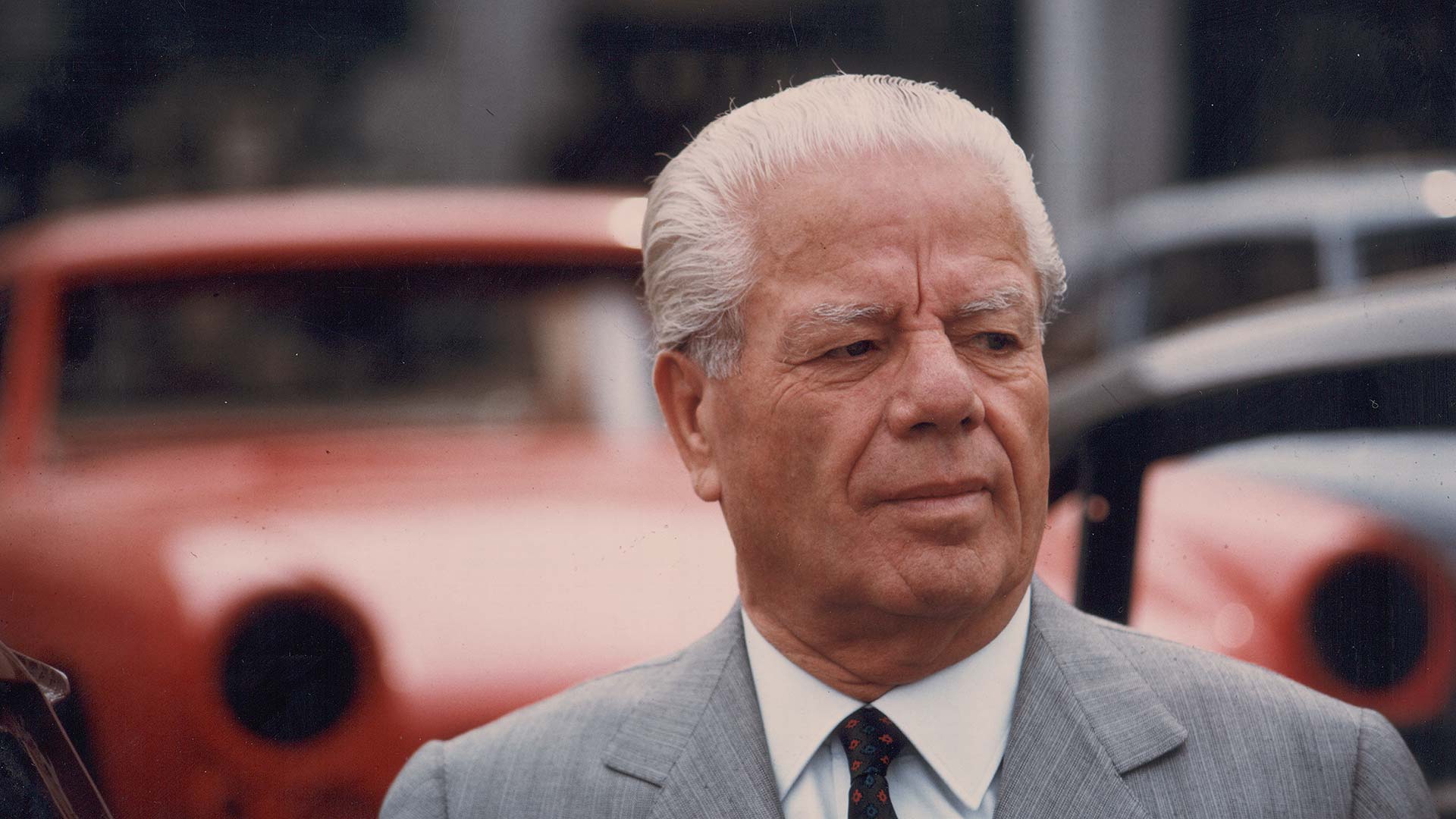 The Battista is the storied Pininfarina firm’s very first road car: up to now, the Italian styling house has designed cars for other brands (it is credited with creating more than 60 Ferraris, for starters). That’s why it’s called Battista, after the Pininfarina founder, who started the company 90 years ago. Paolo Pininfarina, his grandson, says its launch is “a dream come true… my grandfather always had the vision that one day there would be a standalone range of Pininfarina-branded cars.”

It’s the first of many Automobili Pininfarina cars, vows the firm – all of them “purely electric, zero-emissions, luxury cars solely branded Pininfarina”.

For those who like brands with stories, Automobili Pininfarina CEO Michael Perschke says “this is the most authentic and exciting automotive story imaginable. We aim for Battista to be a future classic and automotive icon, writing its own page in automotive history books.”

Why go electric with the first Pininfarina? 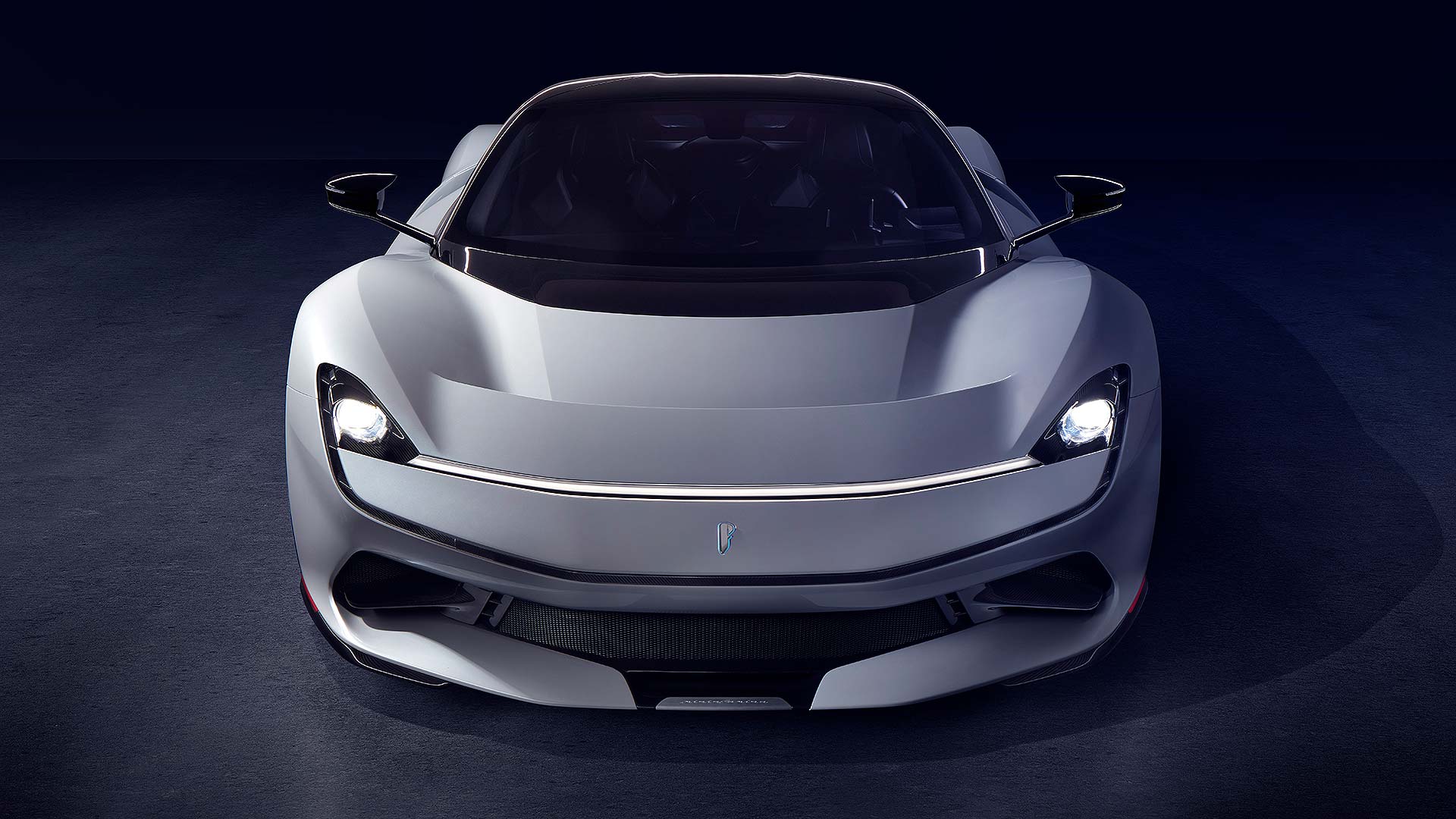 Electric was a no-brainer for the Pininfarina team, they say. “Electrification unlocks the door to a new level of performance and a zero-emissions future,” said Perschke. It’s the first electric ‘poster car’ and described as “a pivotal moment in time for the new automotive environment”.

How fast is the Pininfarina Battista?

The Battista launches with exceptional Top Trumps credentials. Its 1,900 horsepower is combined with almost 1,700lb ft of torque to give a 0-62mph time of less than two seconds. It will accelerate from 0 to 186mph in less than 12 seconds. Top speed? Up to 218mph – yet if you don’t drive quite so fast, it will deliver a range of up to 279 miles.

That’s a monstrous 0-62mph time. Surely Pininfarina’s going to sing it from the rooftops?

Interestingly, Pininfarina reckons the 0-62mph time isn’t actually all that. Electric cars are always quick against the clock. “ICE (internal combustion engine) cars are easily comparable with each other, but we have no benchmark to compare and we have to define the electric hypercar experience,” said chief technical officer Christian Jung. “Agility and manoeuvrability will be more defining than 0-100km/h [0-62mph], I suspect.”

I guess the electric motor is pretty beefy? 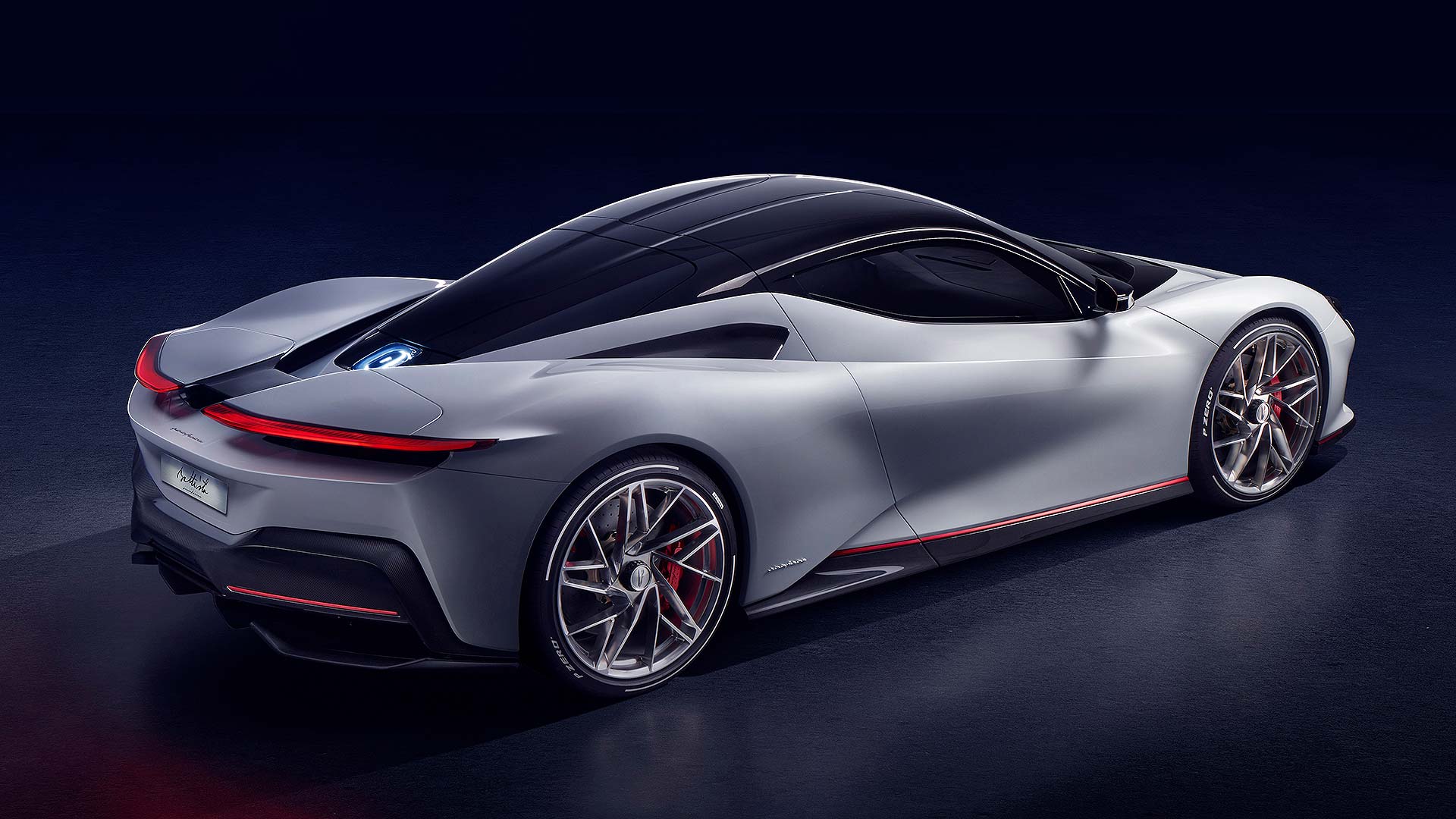 There’s not just one electric motor here – there are four of them, which independently deliver drive to each wheel. Because there’s so much torque, or pulling power, Pininfarina says torque vectoring – distributing the amount of output each motor puts out according to driving conditions – will play a pivotal role in how it drives. After all, it does have more than twice the torque owners of conventional hypercars are used to…

So Pininfarina’s turning the dial up to 11?

Pininfarina admits it might actually have to ease back on how much surge the Battista delivers, so bountiful is its pulling power. “We are trying to go to the extreme that neither Tesla nor the other major OEMs are targeting,” said chief technical officer Christian Jung. “Electrification allows us to support hypercar development with instant torque… we might even have to dial it down, as its reaction time is up to 20 times faster than an ICE (internal combustion engine)!”

How big is the battery in the Pininfarina Battista? 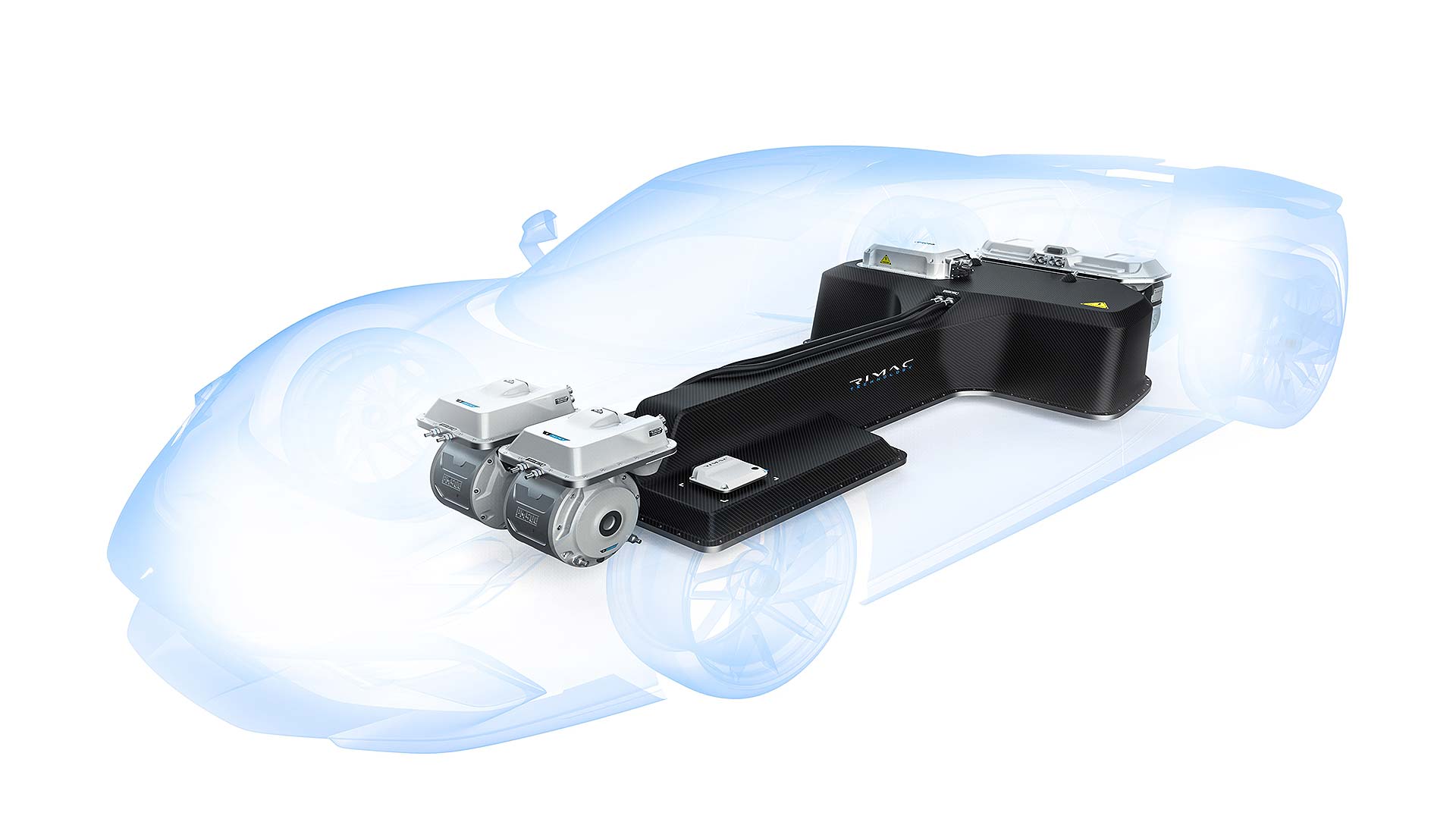 The battery packs a 120kWh output. That’s bigger than any Tesla battery to date, and it’s a T-shaped battery that’s located to optimise weight distribution. The battery, along with the motors plus both software and hardware, are all provided by start-up electric supercar firm Rimac. Richard Hammond famously crashed one of its cars; with Pininfarina, it’s seeking fame for the right reasons…

The batteries could have been bigger, but they would have affected the car’s dynamics. Nearly 280 miles “will cover virtually all possible drives, especially as 90 percent of owners are estimated to charge where the car is garaged”. And the 10 percent who want to go further? DC fast charging capability is built in and “by 2021, using app-based charging networks will be normal for many owners”.

What is the Pininfarina Battista made from? 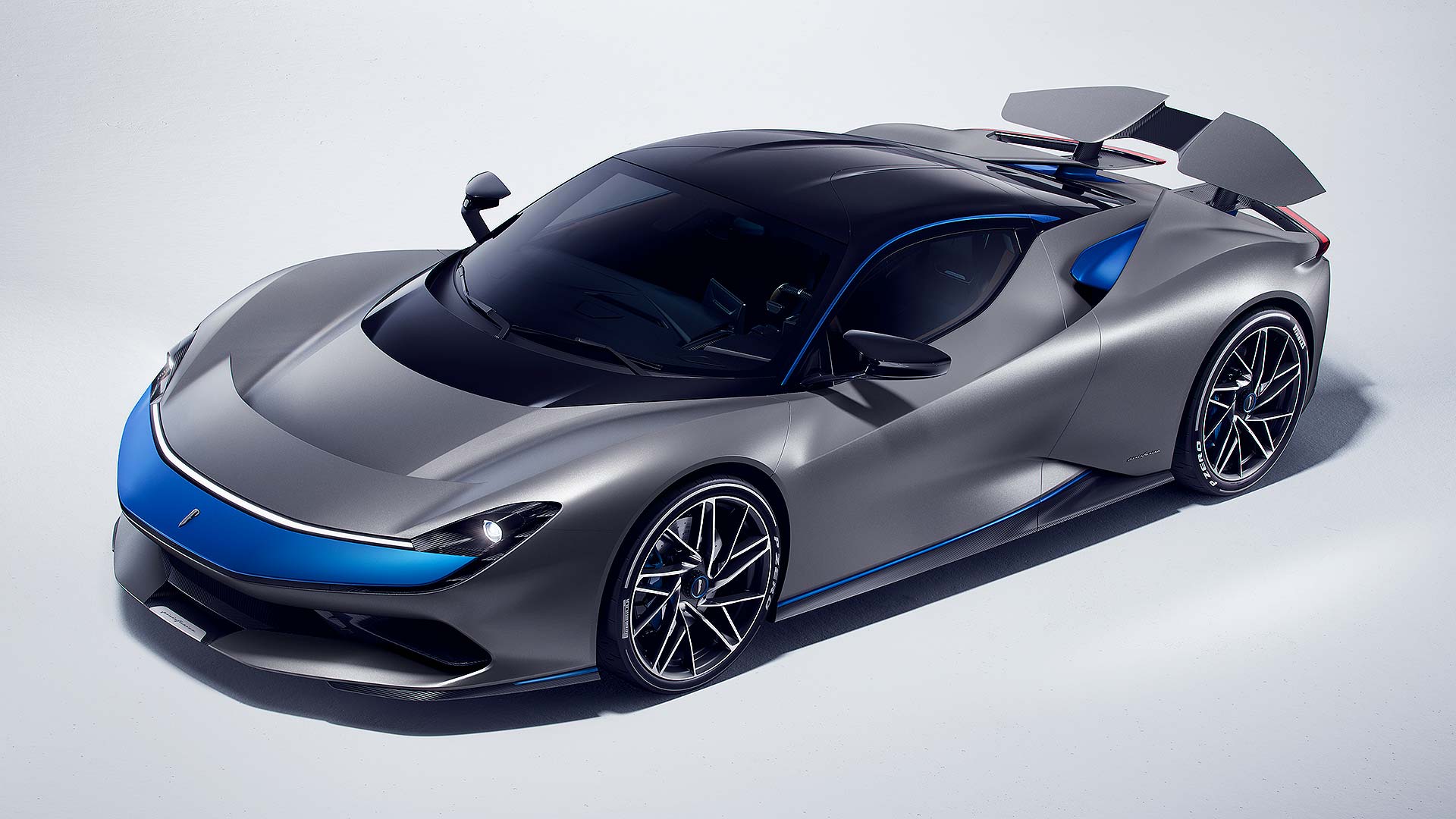 What about the noise?

Electric cars are near-silent. But part of the appeal of hypercars is the noise they make, surely? Quite: that’s why Pininfarina will allow drivers to choose a bespoke sound, from literal near silence, to some bespoke sounds that it promises will not be artificially amplified. It’s not yet defined, but it will draw from key factors including the electric motors, air flow, heater system and even the resonance of the carbon fibre monocoque. Keep an ear out…

It’s quick, then. What’s slowing it down? 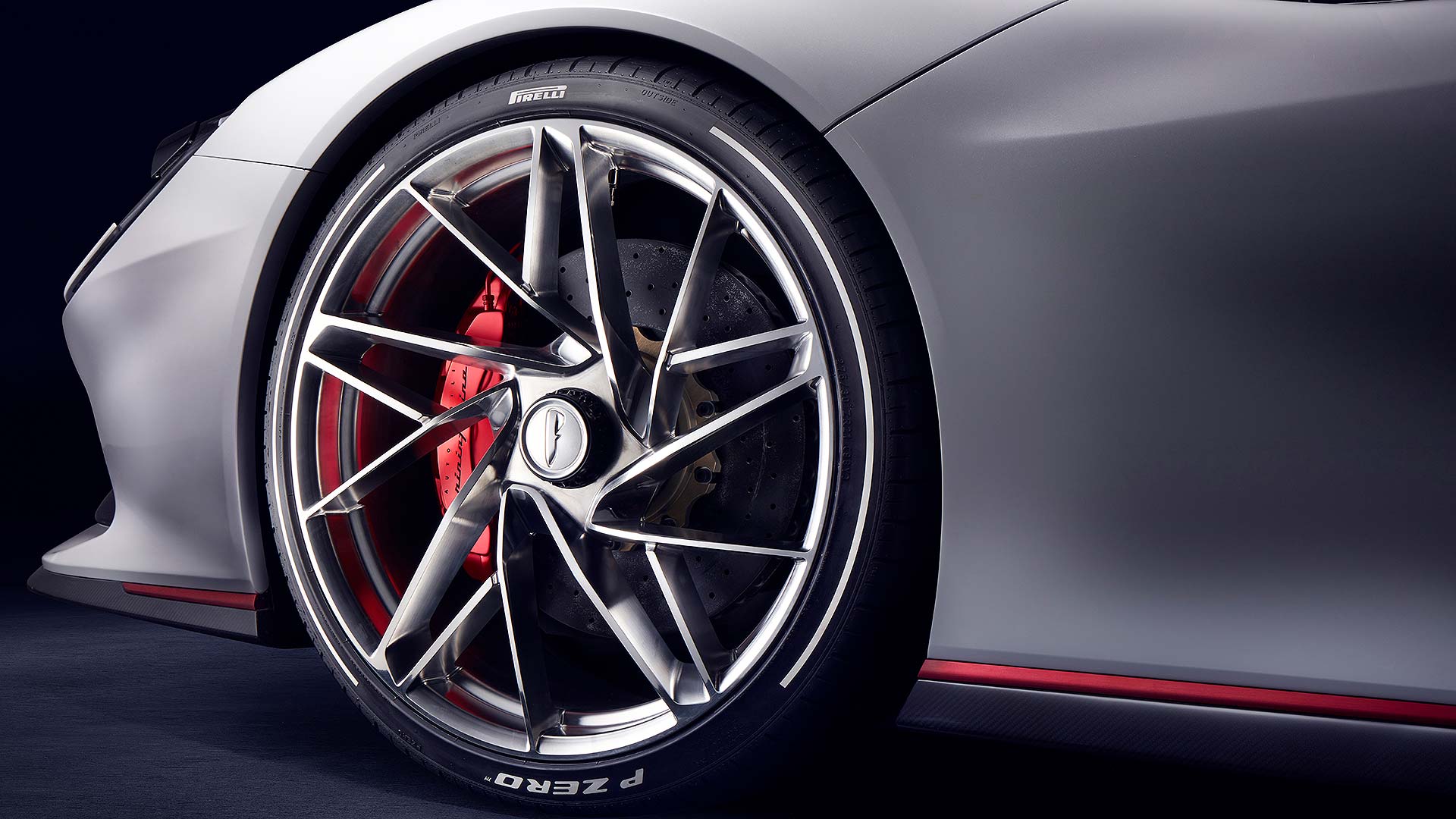 And the Battista’s suspension?

Unlike conventional hypercars, Pininfarina isn’t going big on the Battista’s suspension at this stage. It simply says it will be thrilling, engaging yet comfortable, and be fully adjustable with a range of modes for various driving types.

Who’s setting up how the Battista drives?

Because no Battista owner will ever have driven a 1900 horsepower electric car, Pininfarina’s recruited someone who’s used to driving the elite of racing cars – F1 and Formula E racer Nick Heidfeld. He will work with former Porsche, Pagani and Bugatti engineer Dr Peter Tutzer to make sure the Battista serves up a memorable driving experience.

Do they hint at how Pininfarina’s hypercar may drive? 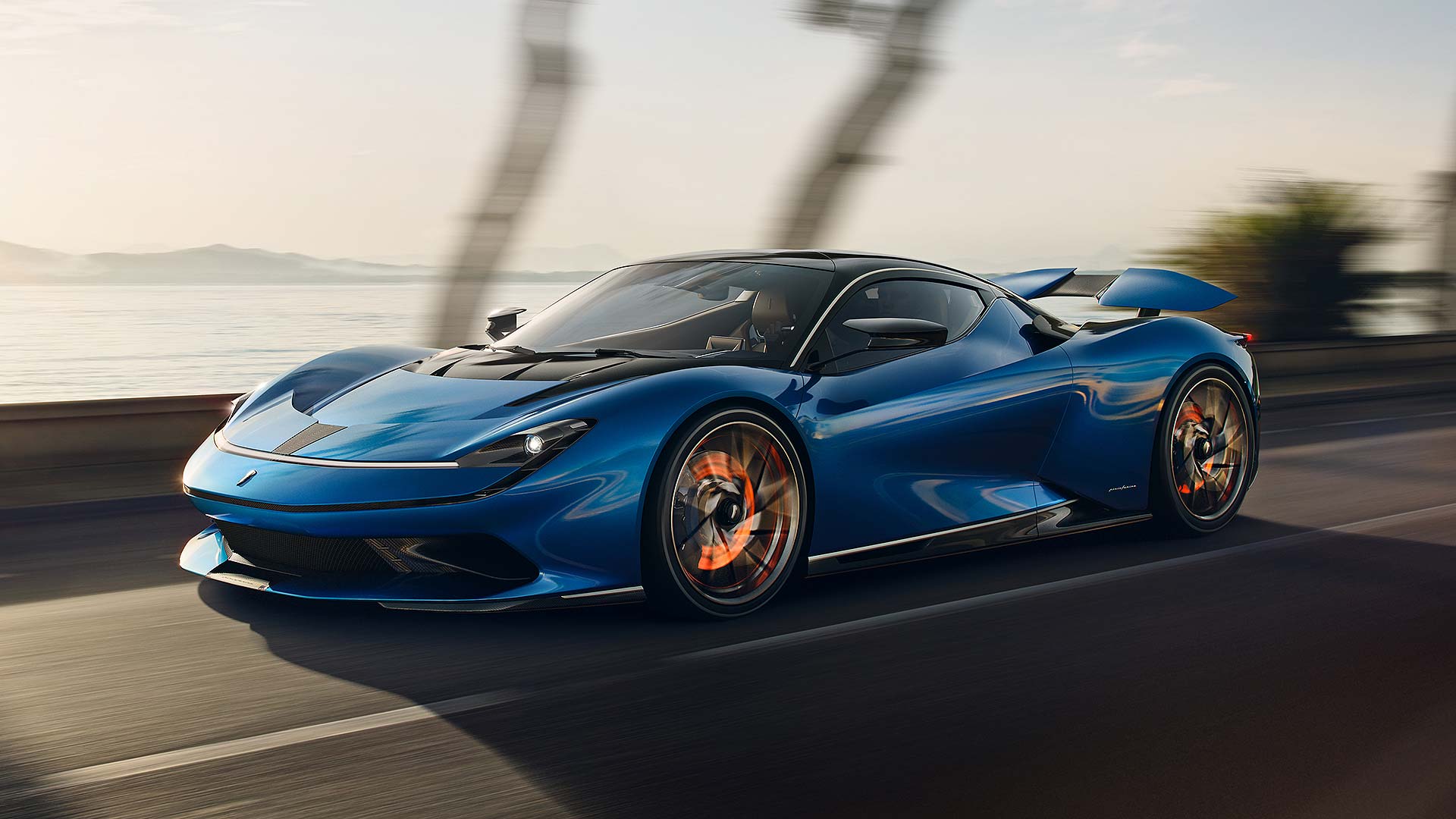 The Battista will be focused on the track but also comfortable on the road, we’re promised. The torque vectoring systems will “put far more control in the hands of the driver than in a traditional internal combustion engine performance car”. Heidfeld backed this up, comparing Formula E racers to the Battista in the fact “there is no delay at all on the throttle… even in a Formula 1 car we feel a delay”.

Not only is it faster than an F1 car, then, it’s also more responsive. How truly incredible does this car sound?

Pininfarina has been a styling house for 90 years. What does the first car it’s designed for itself say? 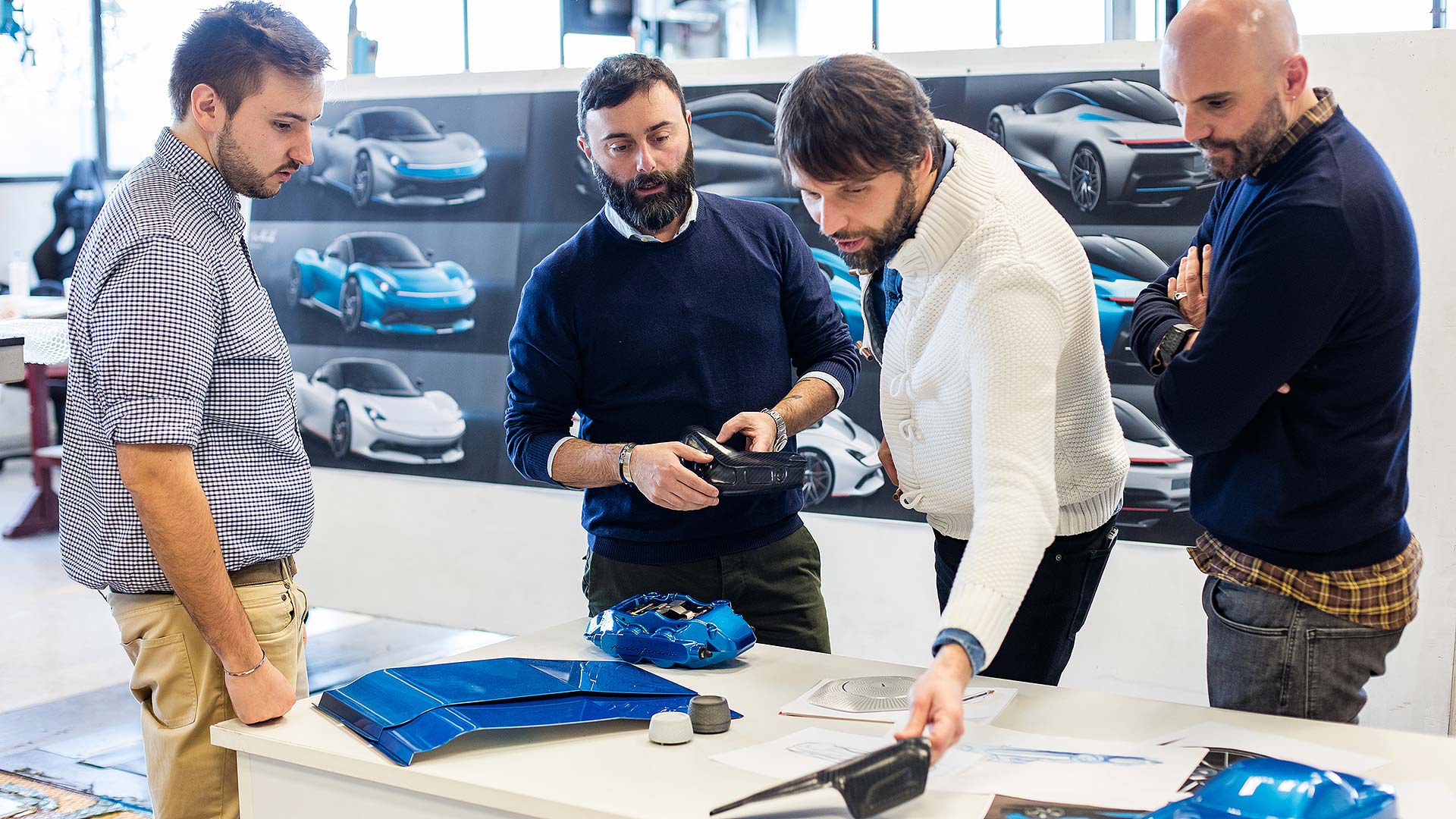 The Battista serves up “classic Pininfarina design cues,” says the firm, paying homage to some of its most famous cars: Cisitalia 202, Ferrari Dino Berlinetta Speciale, Ferrari Modula and the Sinesti concept car.

It doesn’t much look like an electric car, does it?

The Battista is a “beautiful, pure performance car”. Pininfarina has avoided designing in any overt features that mark it out as an EV. The most overt hint is the Pininfarina Blue colour of one of the three cars at Geneva – it’s “more electric in tone than Pininfarina’s traditional blue, reflecting the technological innovation within”. The firm’s created it by spraying on multiple layers of paint to give it shimmering depth.

What are the design highlights? 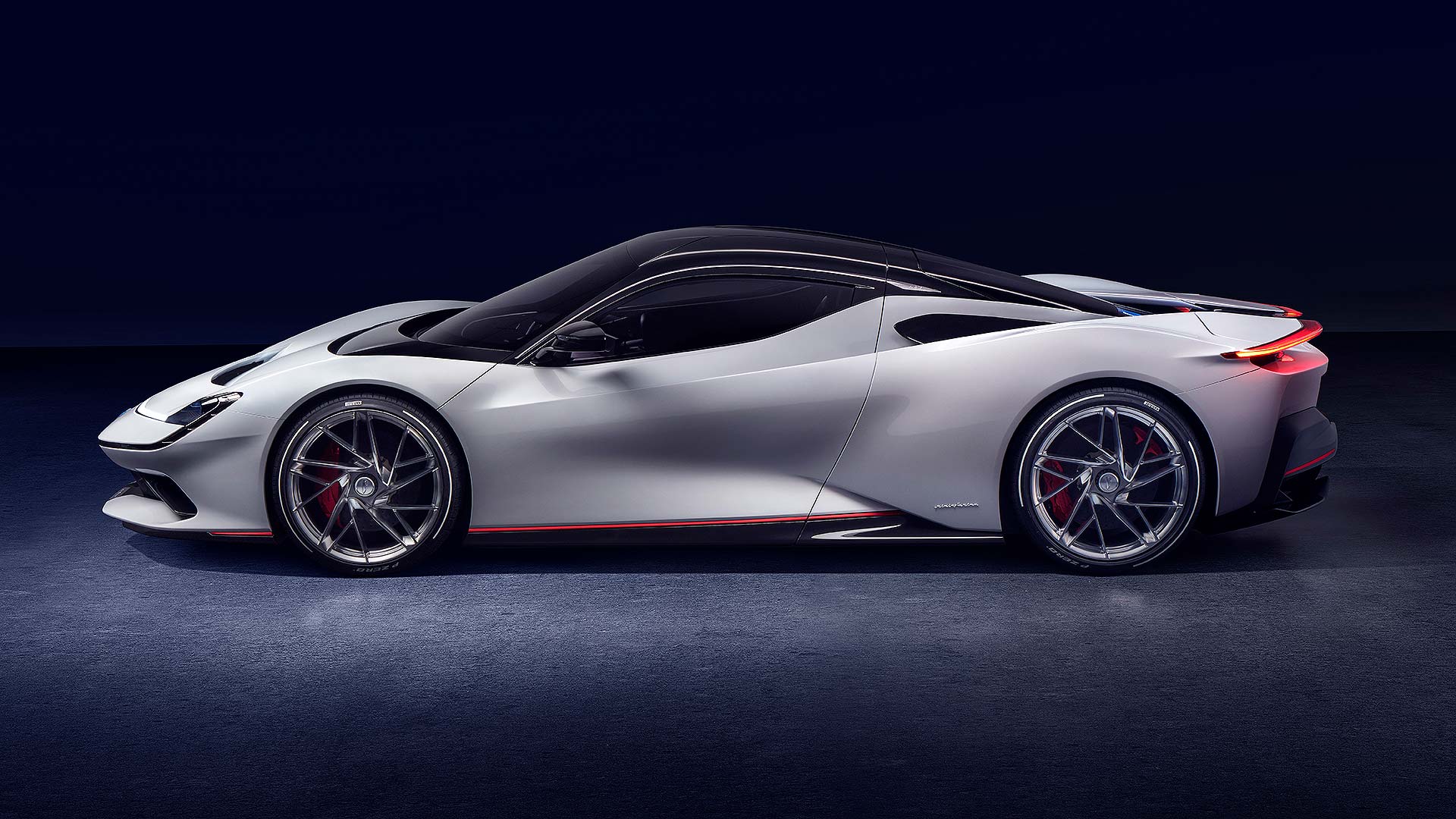 Pininfarina is proud that most of its designs can be described in two lines. The same is true for the Battista, which is the work of Luca Borgogno. It has a teardrop cabin shape sitting on sculpted and “sensuous” body sides, a floating wing look at the front and an “iconic” design of rear wing. It’s simple, elegant and, insists Borgogno, “beautiful”. He also adds it has the same sort of functional harmony seen in another iconic Pininfarina hypercar – the Ferrari F40.

What’s the story inside?

Because the Battista serves up such phenomenal performance, Pininfarina has paired back the interior, so it’s distraction-free – and all the vital interfaces directly face the driver alone. Traditional dials have been binned for HD screens, and to this framework, there’s almost endless personalisation. 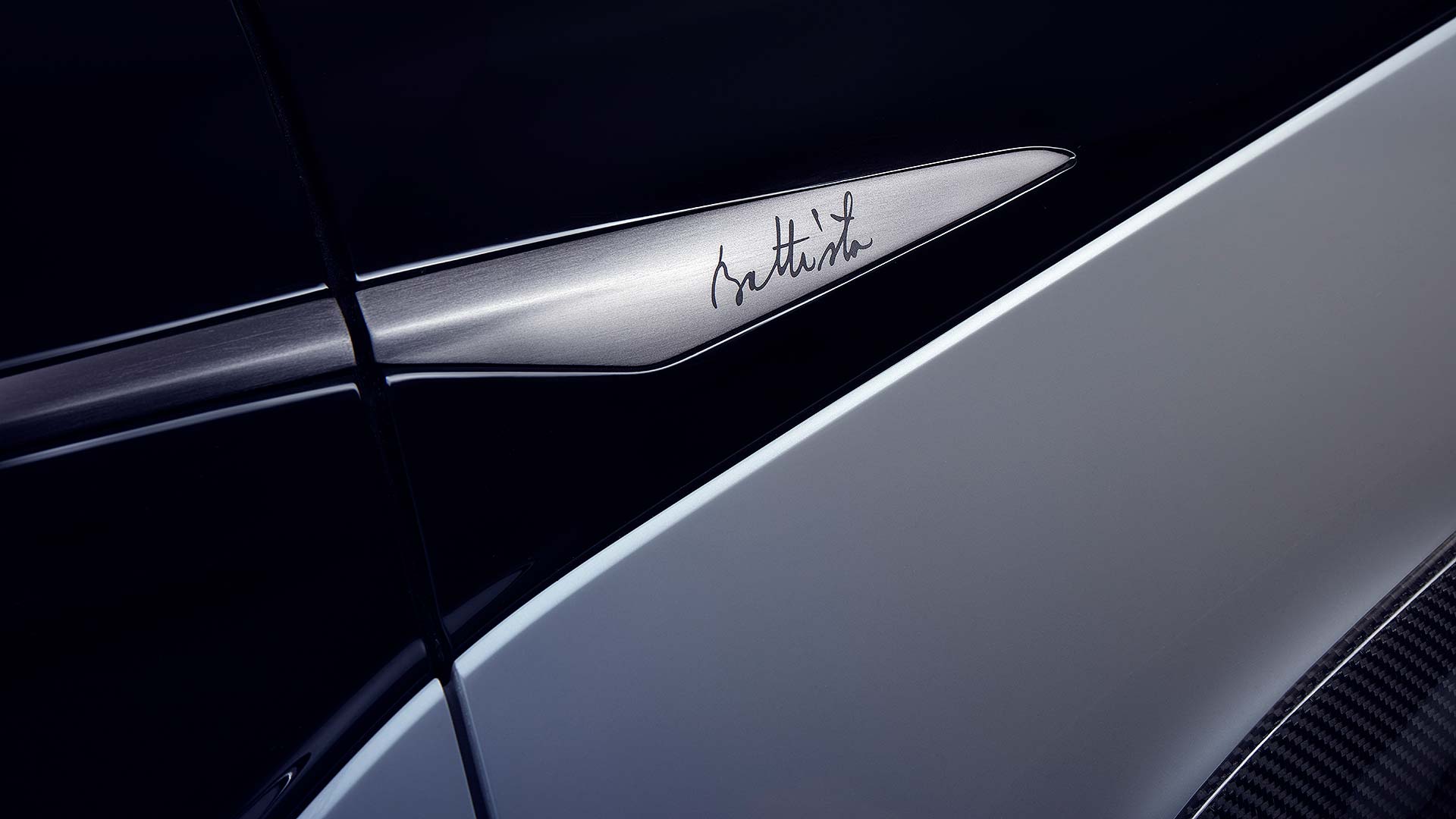 Hypercar world, meet your newest entrant. ‘Pininfarina’ is going to become a name as revered as Pagani and Ferrari, and will become so whilst also being truly sustainable. That one of the world’s mightiest ever cars is also a zero-emissions all-electric one is quite the statement of intent. It’s an ecologically on-message poster car that rightly is one of the stars of the 2019 Geneva show. Believe the hype.