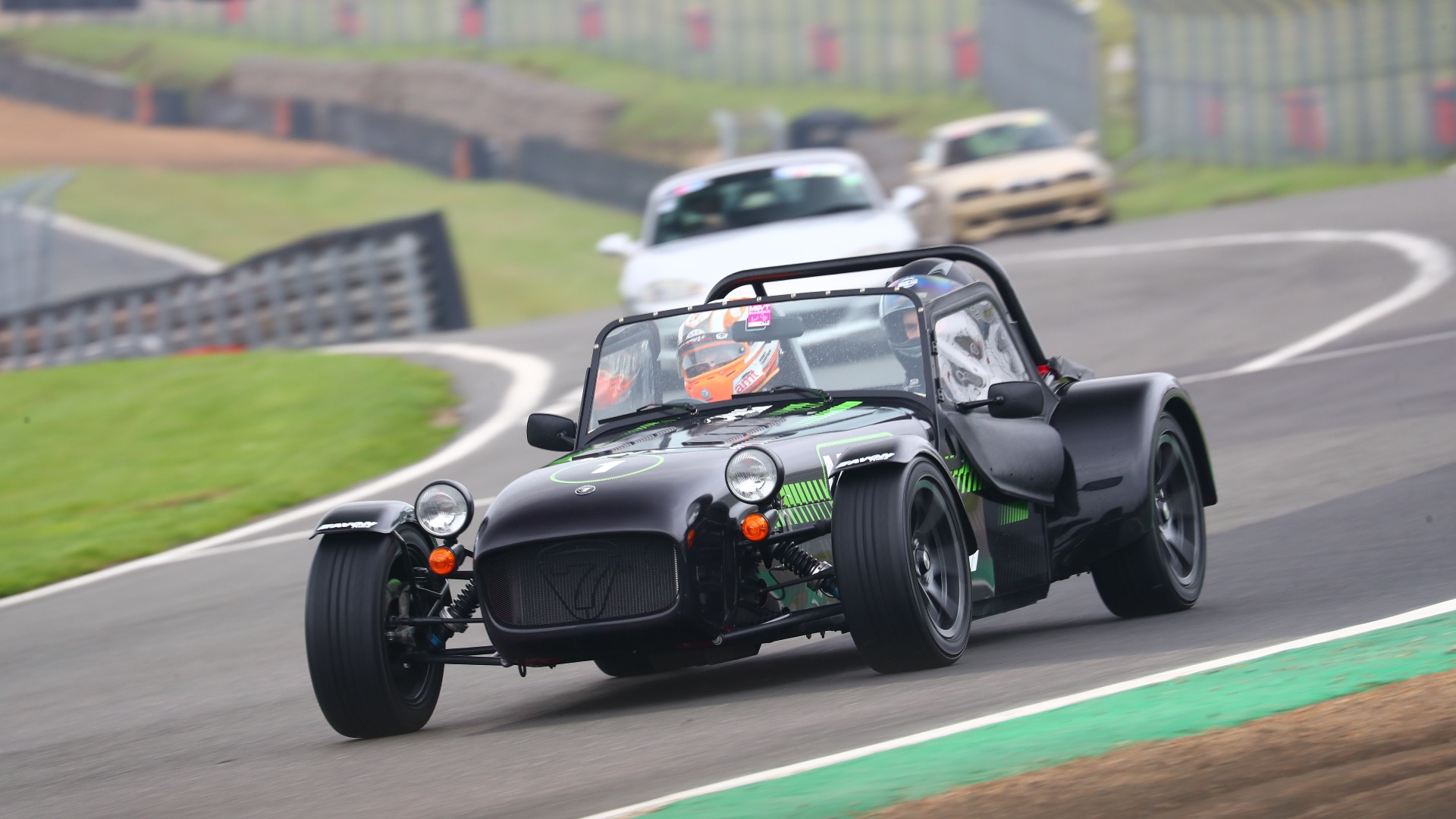 “You wear a Caterham like a glove. It’s pure driving – that’s why everyone loves them.” So says Jack, my instructor for the day, as I lower myself into the skinny-fit seat of the Seven. If this is a glove, I must have oddly large hands.

At 9am sharp, the light goes green and I edge cautiously out of the pitlane. Brands Hatch is damp with morning dew and the Caterham’s Avon track tyres are cold.

Fortunately, these are just sighting laps to learn the circuit. The real stuff comes later. 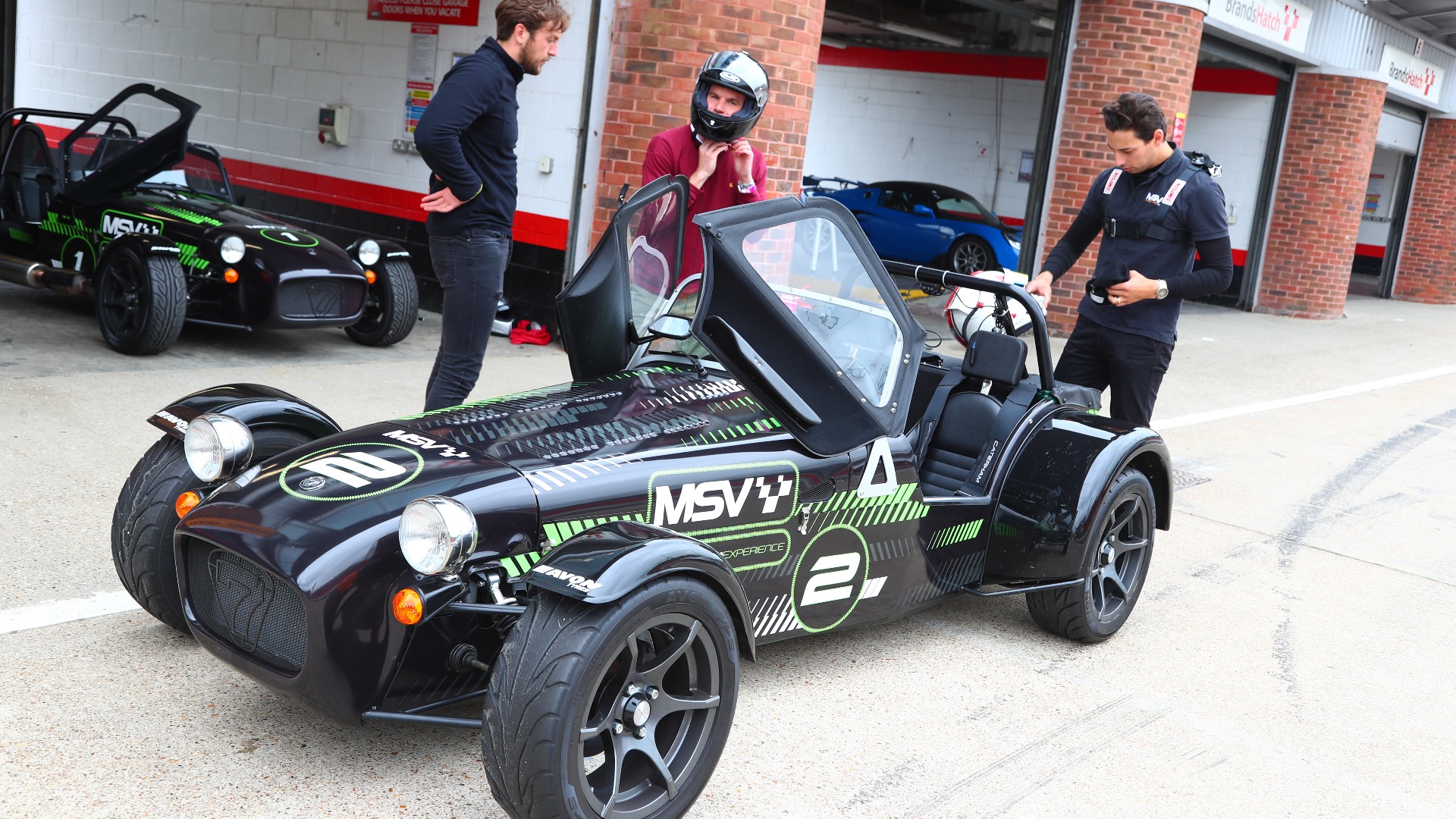 This isn’t my first time in a Seven, but it’s still a culture-shock after a ‘normal’ car. You feel hard-wired into the controls, every input amplified by the tiny steering wheel and taut suspension.

There are no driving aids and no excuses. Which is what I’m worried about. 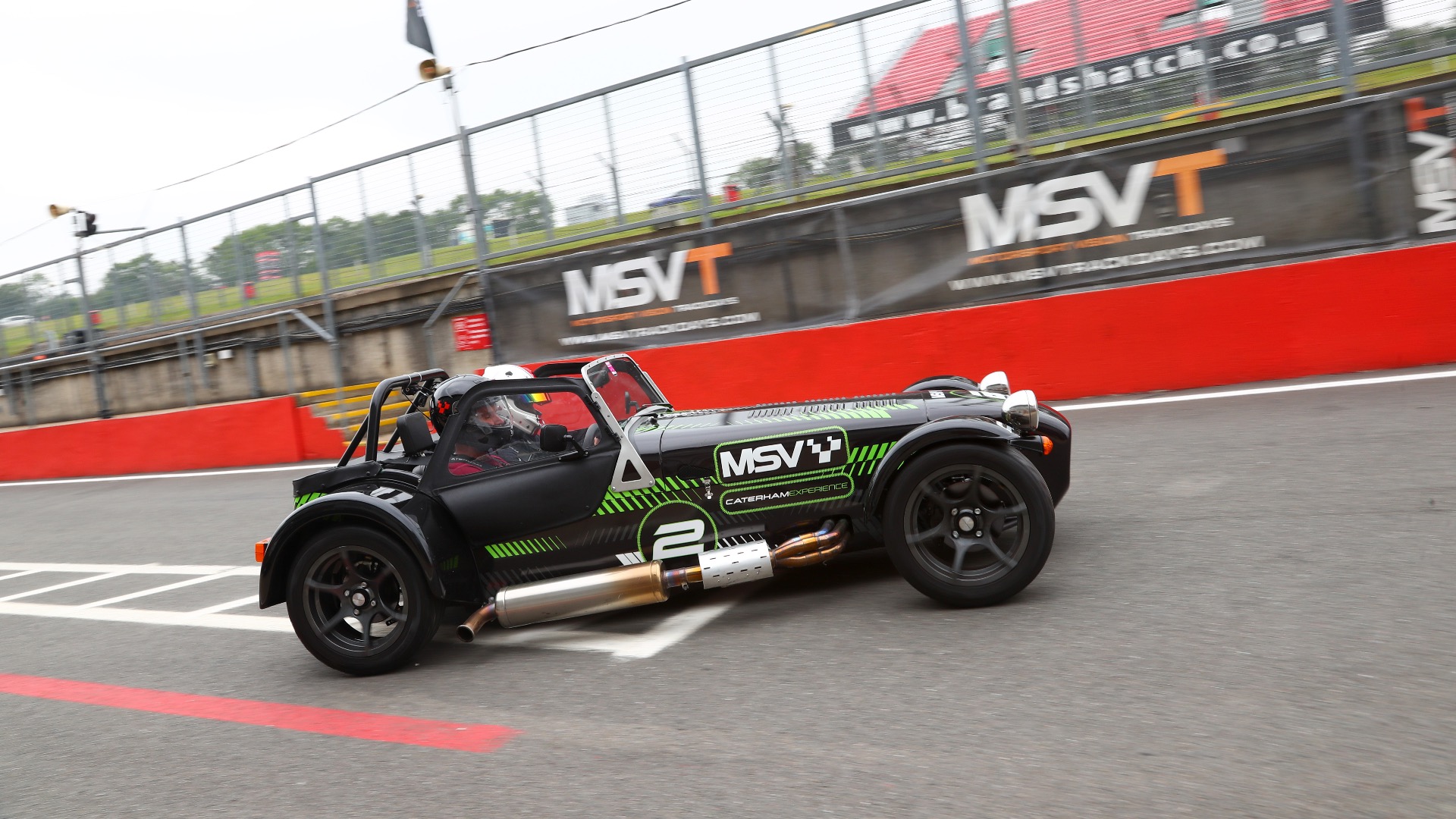 Caterham track experiences at Brands Hatch are organised by MotorSport Vision (MSV) and a half-day costs £549. Alternatively, you could opt for half a day drifting in a Seven for £189.

I start at 7:30am with signing on, a safety briefing and a strong coffee. This is an ‘open pit lane’ track day and around 70 drivers are here – although only 25 can use the circuit at once. 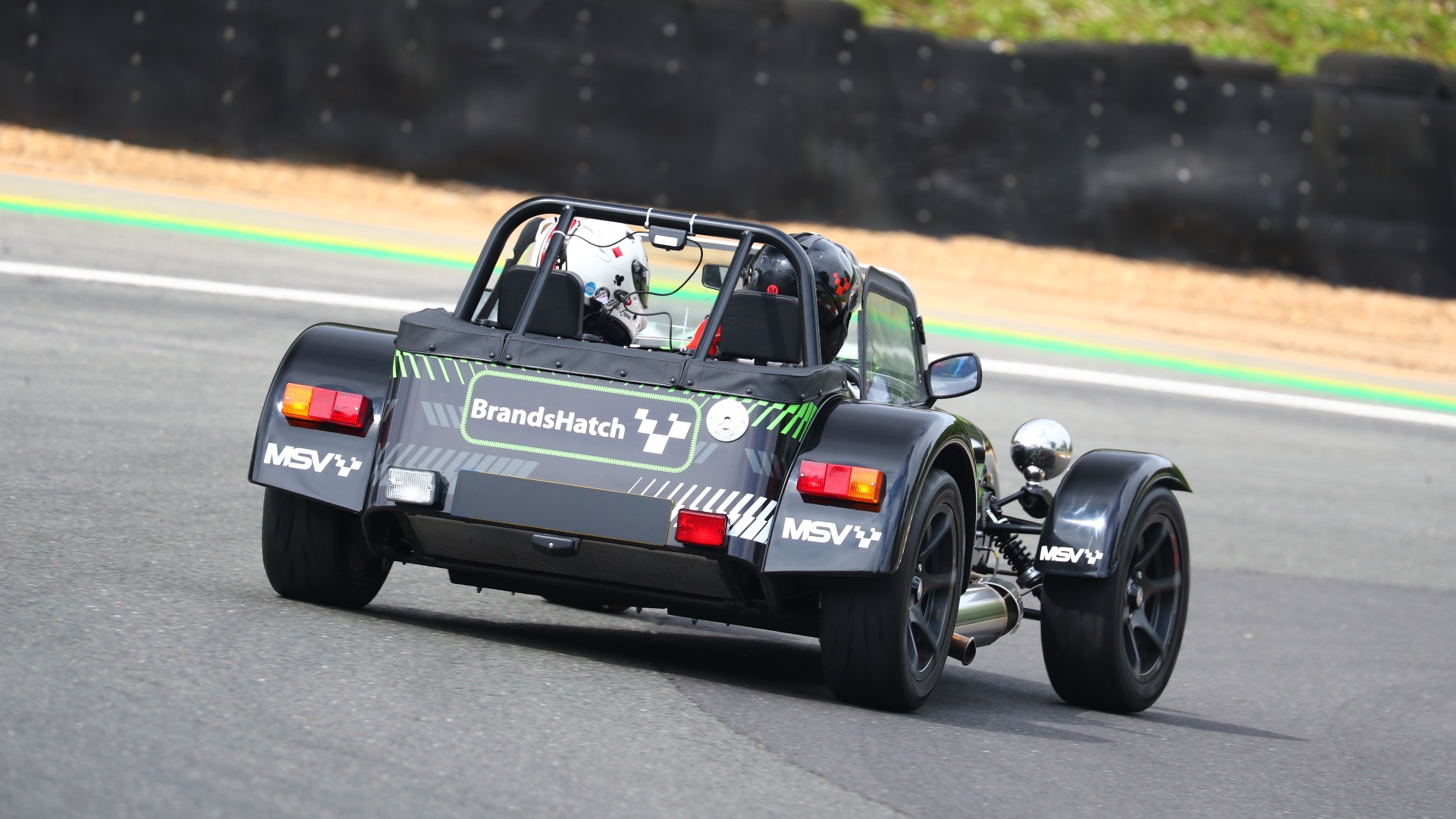 Some want to test home-built hot rods, others are shaking down race cars. I studiously avoid mentioning this is my first ‘proper’ track day.

Thankfully, Jack puts my mind at ease. A professional racer and driver-for-hire, he’ll be in the passenger seat, watching the mirrors, showing me the racing line and keeping me out of trouble. Time to jump in the Caterham…

Story of the Seven 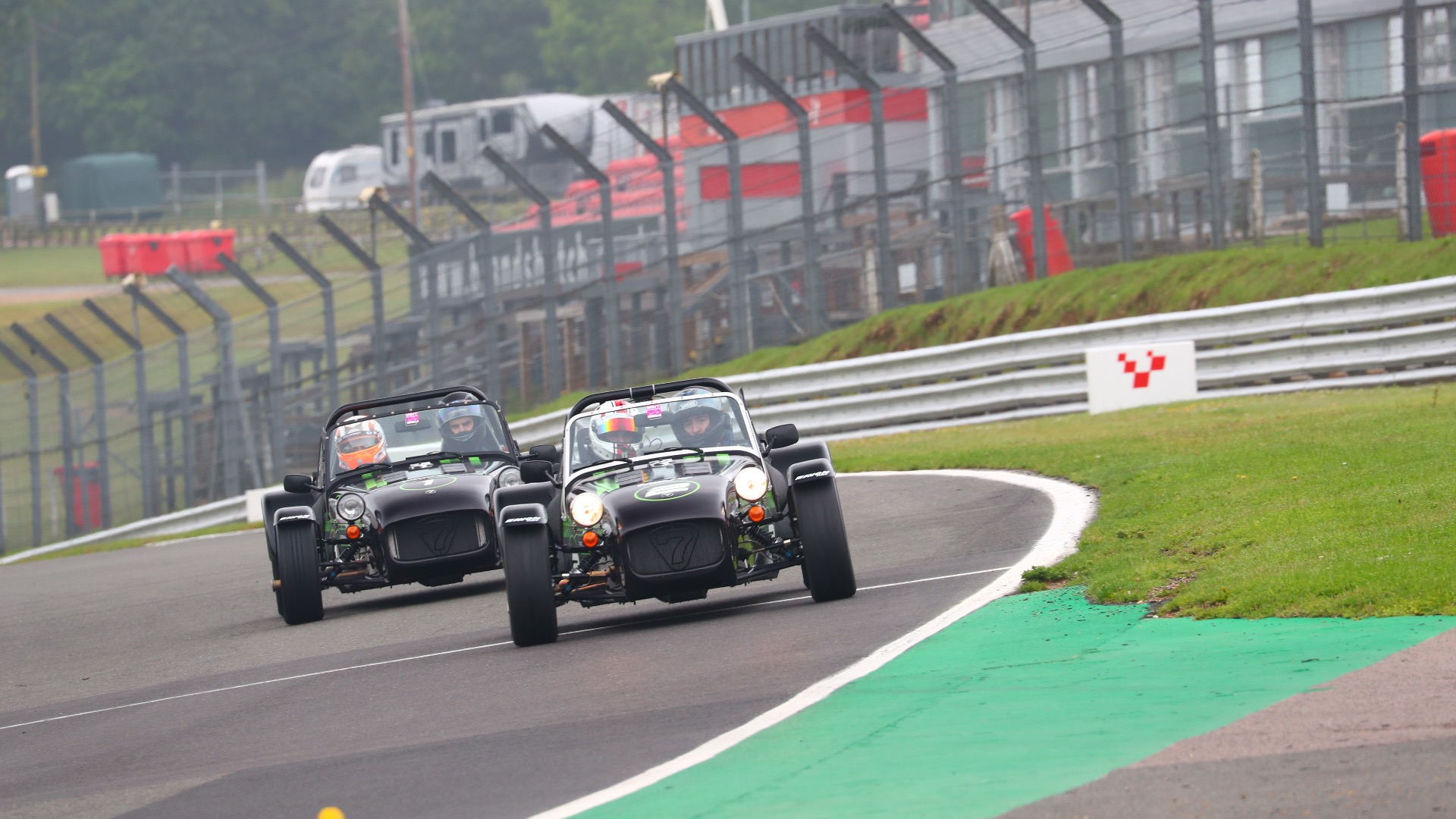 The story of the Caterham Seven starts with the original 1957 Lotus Seven, a back-to-basics sports car popular in club-level motorsport. When production ceased in 1972, Caterham Cars bought the rights. The company, now based in Crawley, has been building Sevens ever since.

Today, the Seven is effectively a range of cars: 160, 270, 360 and 420. Those numbers refer to each model’s power-to-weight ratio in horsepower per tonne.

So, as the car weighs around 500kg, you approximately halve each figure to know its power output.

On-track at Brands Hatch today in a Caterham Seven 270S.

Hoping to get some laps in before it starts raining… pic.twitter.com/xAokkArQON

The ‘S’ refers to a £2,995 option pack aimed primarily at road use. It includes a heater, leather seats and a full windscreen, hood and side-screens. 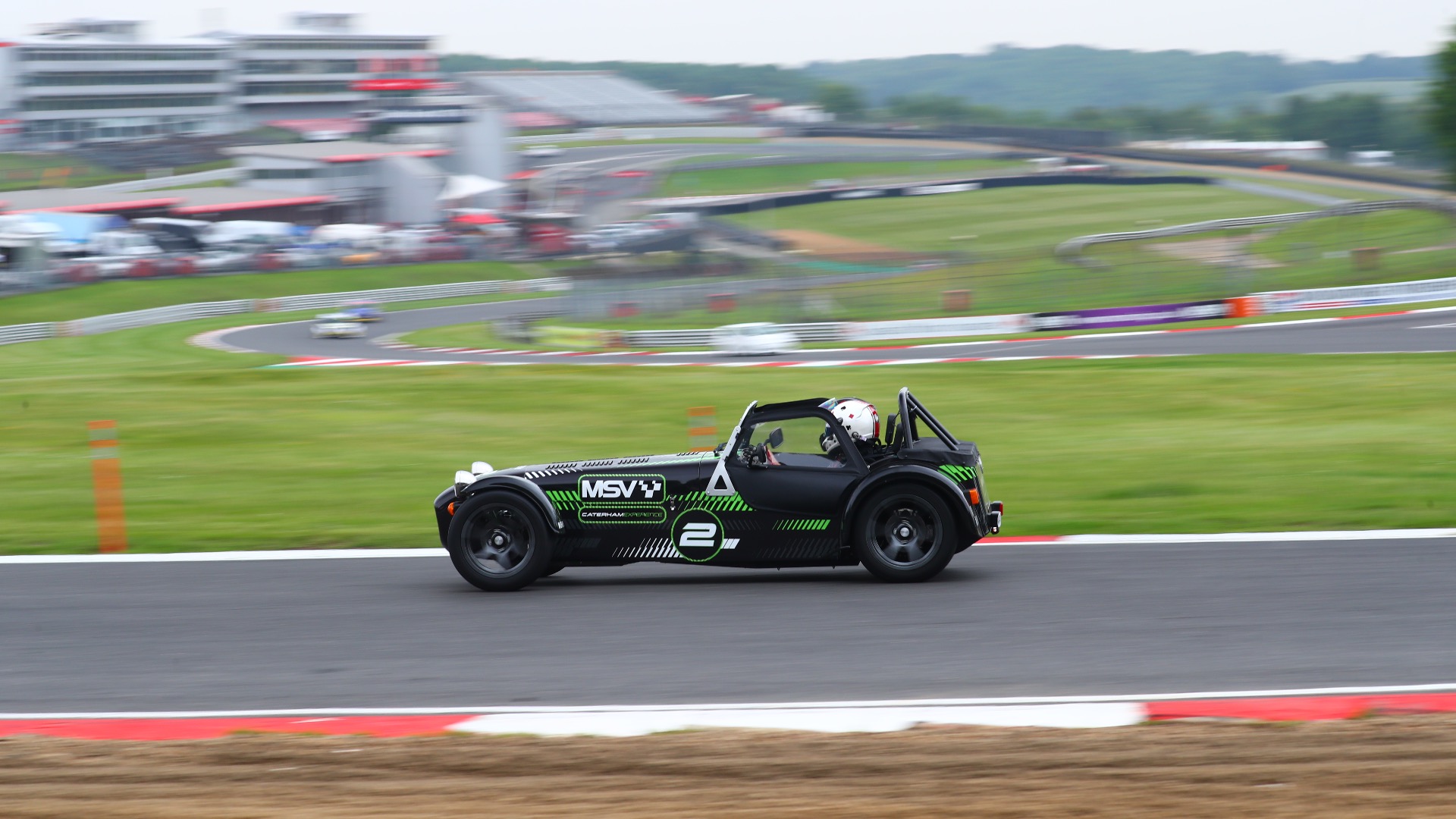 MSV has two cars here, one standard size and one with the wider SV chassis. Being vertically challenged, I do most of my sessions in the former.

I’m practically rubbing shoulders with Jack, but we still need helmet intercoms to communicate clearly above the engine and road roar.

The pedals are packed tight, too, making it easy to press the throttle and brake at once. Still, I manage to exit the pit lane smoothly and ease right into the steep downhill at Paddock Hill Bend – “one of the best corners of any UK circuit,” says Jack.

The sighting laps are a steady procession with no overtaking allowed, but getting accustomed to the Caterham’s controls takes time. 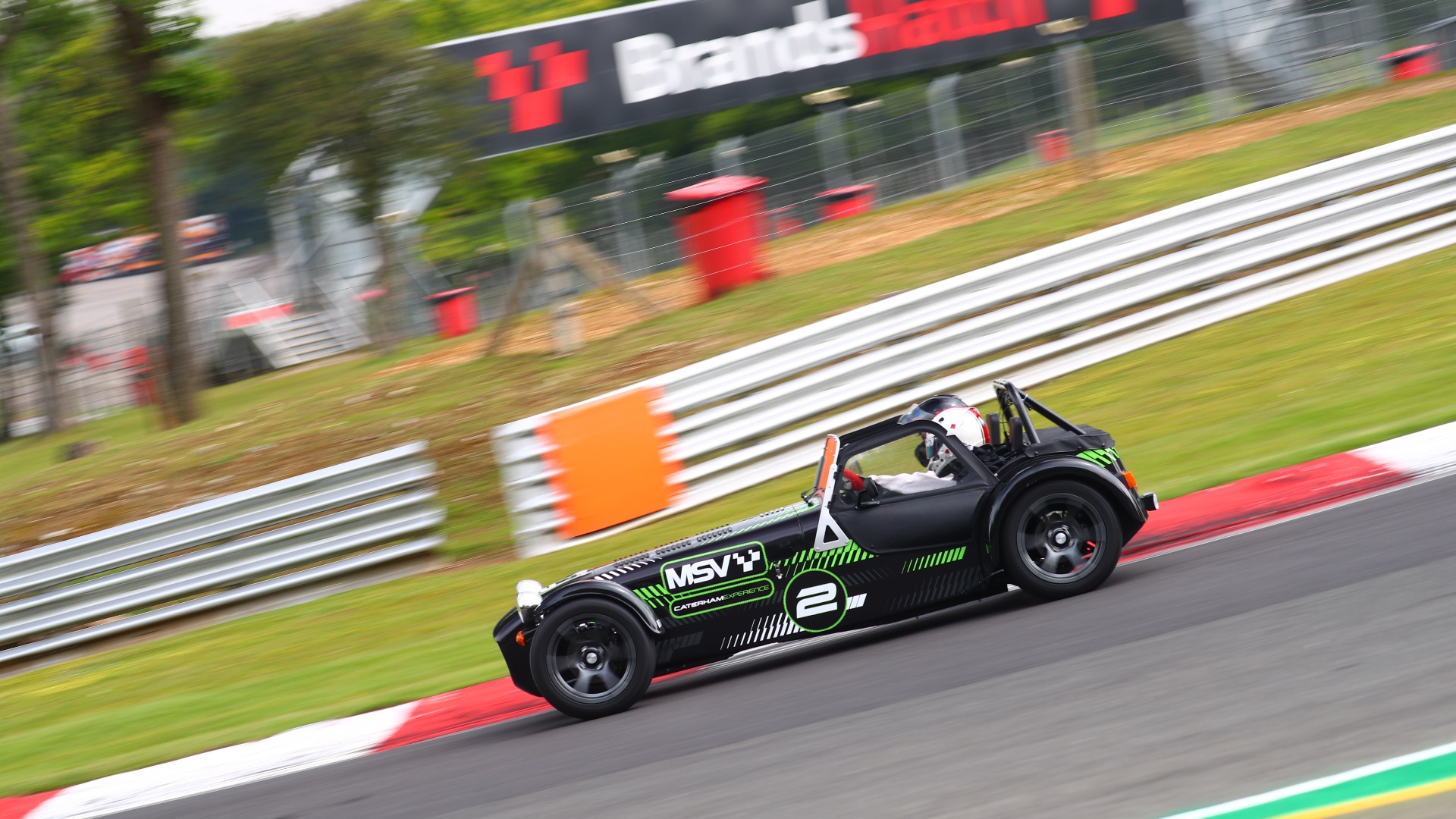 The steering is so sensitive that at first I’m turning too much, hugging the inside of bends instead of slicing apices.

Slowly, though, I begin to relax and concentrate on Jack’s commands. “Being smooth is key,” he says, “and only do one thing at a time: accelerate, brake or steer.”

My first proper session feels like a steep learning curve. It’s intimidating with so many quicker cars on-track – including a McLaren 720S, several BMW M3s and a Porsche 911 3.0 RSR replica – and I frequently pull over on the Brabham Straight to let others pass.

Not that the Seven feels slow. With so little weight to shift, it revs stridently and punches hard out of bends. 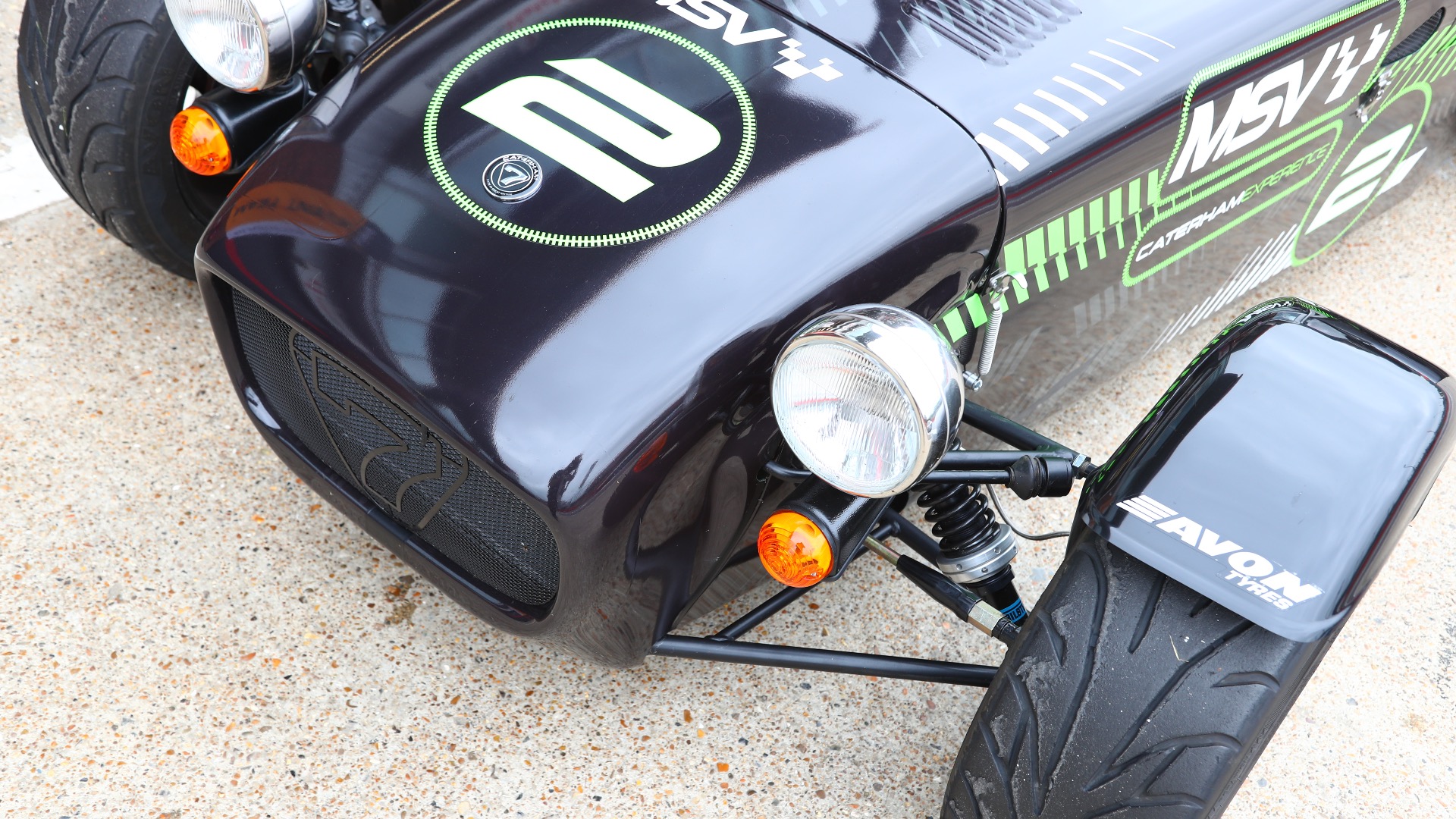 At Jack’s suggestion, I start by staying in fourth gear, concentrating solely on braking and steering inputs. The Caterham’s coil-sprung chassis is so lucid, it’s all too obvious when you get something wrong.

Fail to brake in a straight line or hit the gas too soon and you instantly feel it lose focus, like a spinning top teetering off-centre. Finding its limits is, to a large extent, a game of trial and error, pushing gradually harder until grip turns to slip.

By late morning I’m shifting gears confidently and (mostly) in the right places. I even attempt some heel-and-toe blips on downshifts, although the proximity of the Seven’s pedals makes this tricky.

Around the long 180-degree right-hander at Clearways, I goad the car into a slide, steering with the throttle as much as the wheel. It’s brilliant fun; I’m constantly learning more and driving faster.

How the pros do it 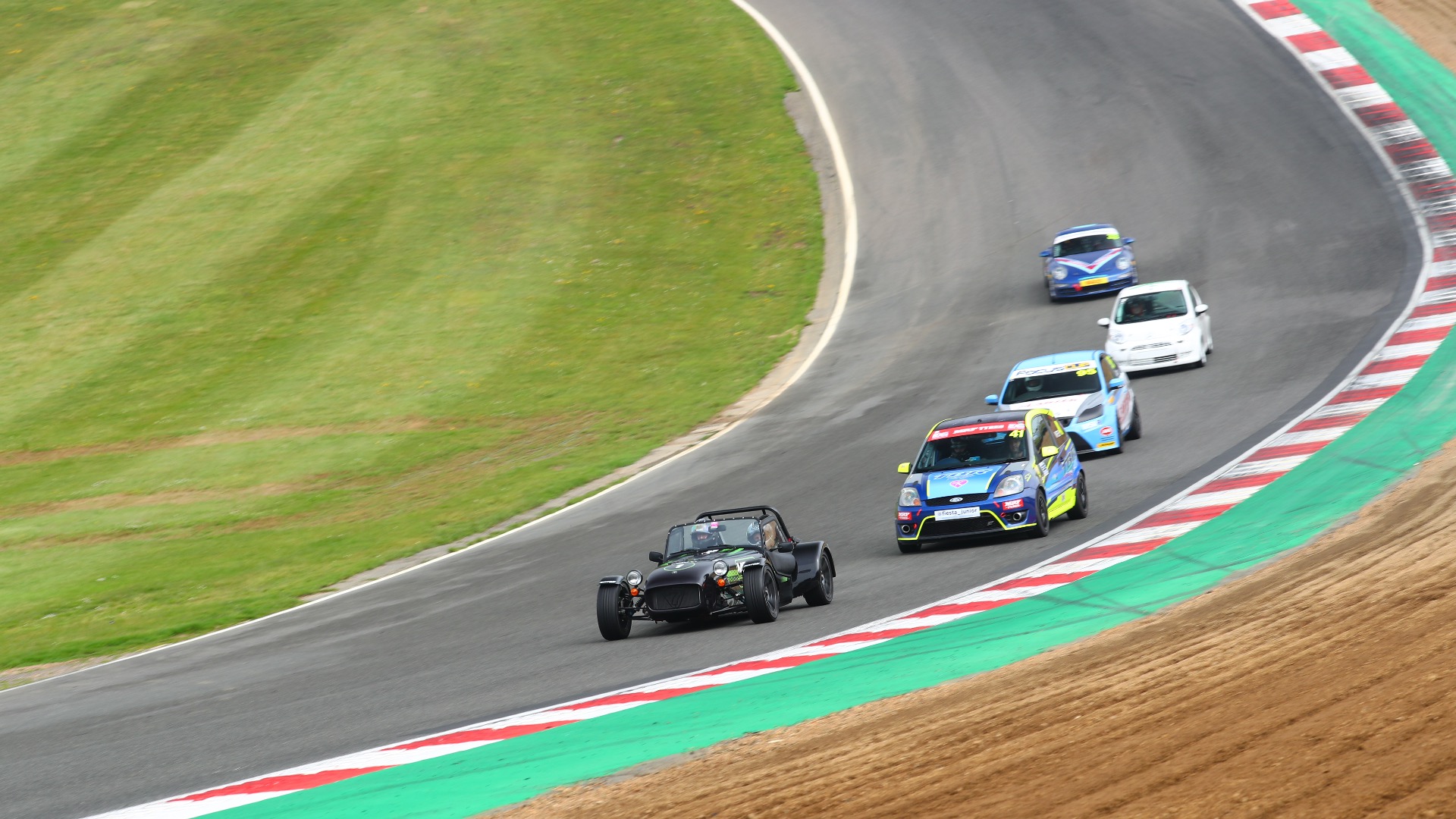 For the final session of the day, Jack has something different in mind: “Now I’m going to shut up and let you drive,” he grins. “Time to put everything you’ve learned into practice.”

I’m tired, both physically and mentally, from a day of wrestling the Seven around Brands Hatch, but I soon find my flow. It’s far from a virtuoso performance, but his thumbs-up as we pull into the pit lane matters more than I care to admit.

Before I go, there’s one more surprise in store. Jack and I swap places and he shows me the huge gulf in talent between an enthusiastic amateur and a true racing driver.

I bite my lip and clench my stomach as we blat between bends, clipping kerbs and even overtaking a stripped out M3 (with probably twice the power). I’m glad we didn’t attempt this straight after lunch. 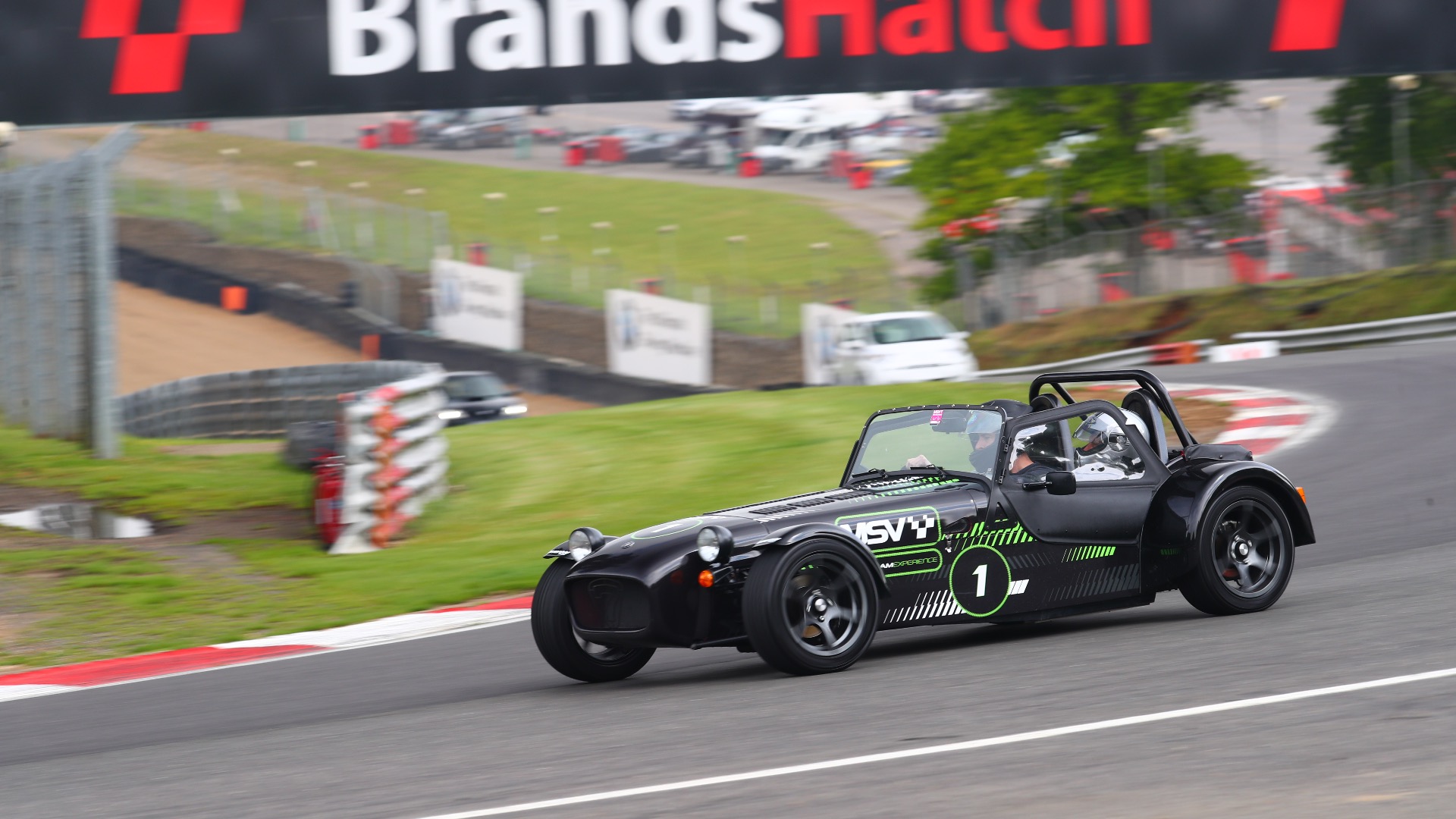 I’m also quietly glad to climb into my oh-so-sensible Volkswagen T-Cross for the drive home.

The reality of the rush-hour M25 bites hard, but I’ve experienced a different sort of driving today – and I’m already itching for another go.

Many thanks to Simon Reid at Fokus Media for all photos.