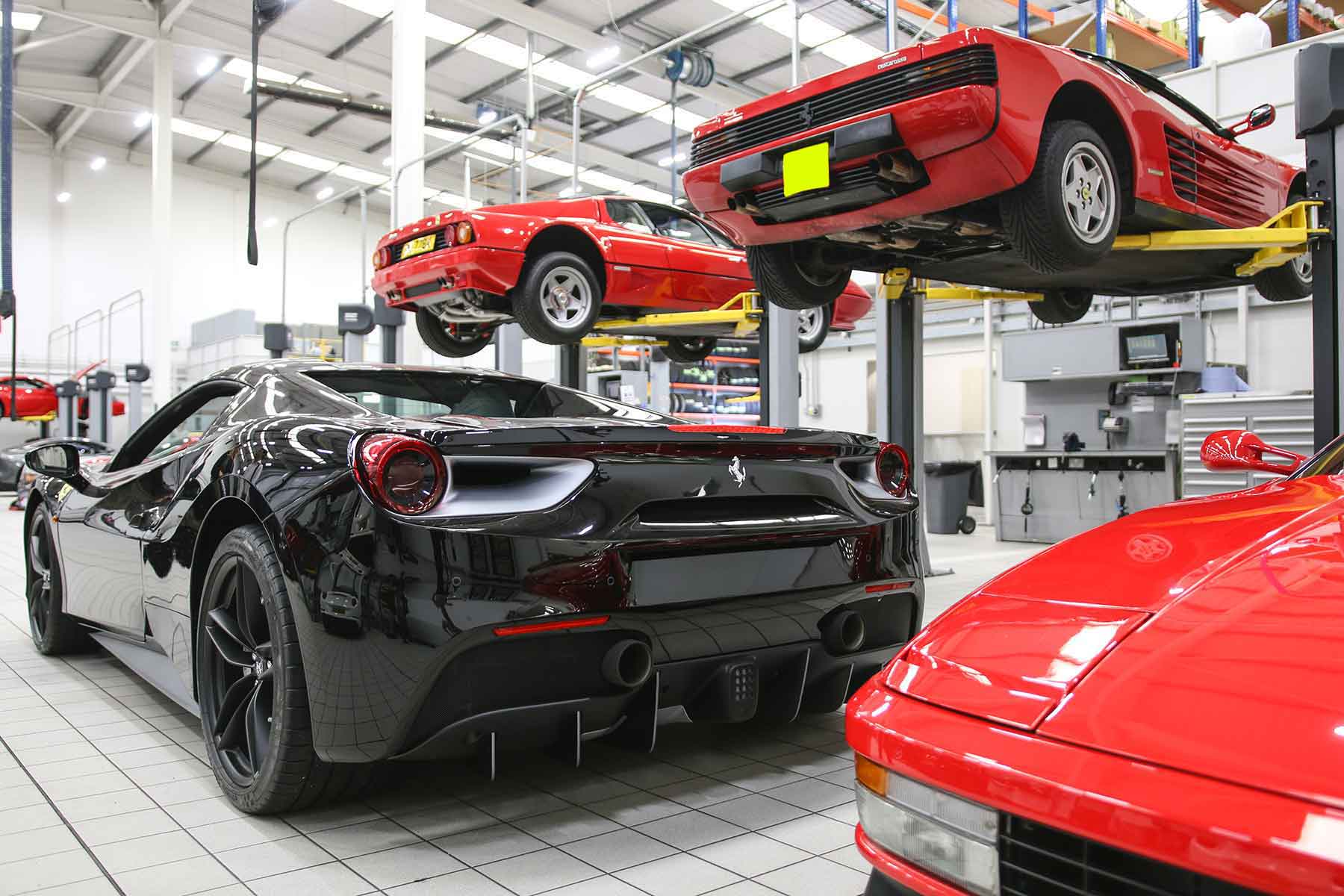 This isn’t a typical workshop. There’s no oil on the floor, no tea-stained mugs on the shelves. Not even a politically incorrect calendar on the wall. Everything is clean, bright and brilliant white.

The soundtrack, however, is somewhat less sedate. One minute there’s the yelp of a Ferrari V8, the next the thunderous bellow of a Lamborghini V12. Evidently, the cars here are far from typical, too.

H.R. Owen is the UK’s largest independent dealer for all things posh and powerful, with showrooms for Lamborghini, Bugatti, Ferrari, Bentley, Rolls-Royce, Aston Martin, Maserati, Lotus and BAC. There’s also a large servicing side to the business, which customers rarely see.

Join us for a trip behind the scenes – and watch our exclusive video – as we get a first-hand view of supercar servicing.

Video: inside the service centre for supercars 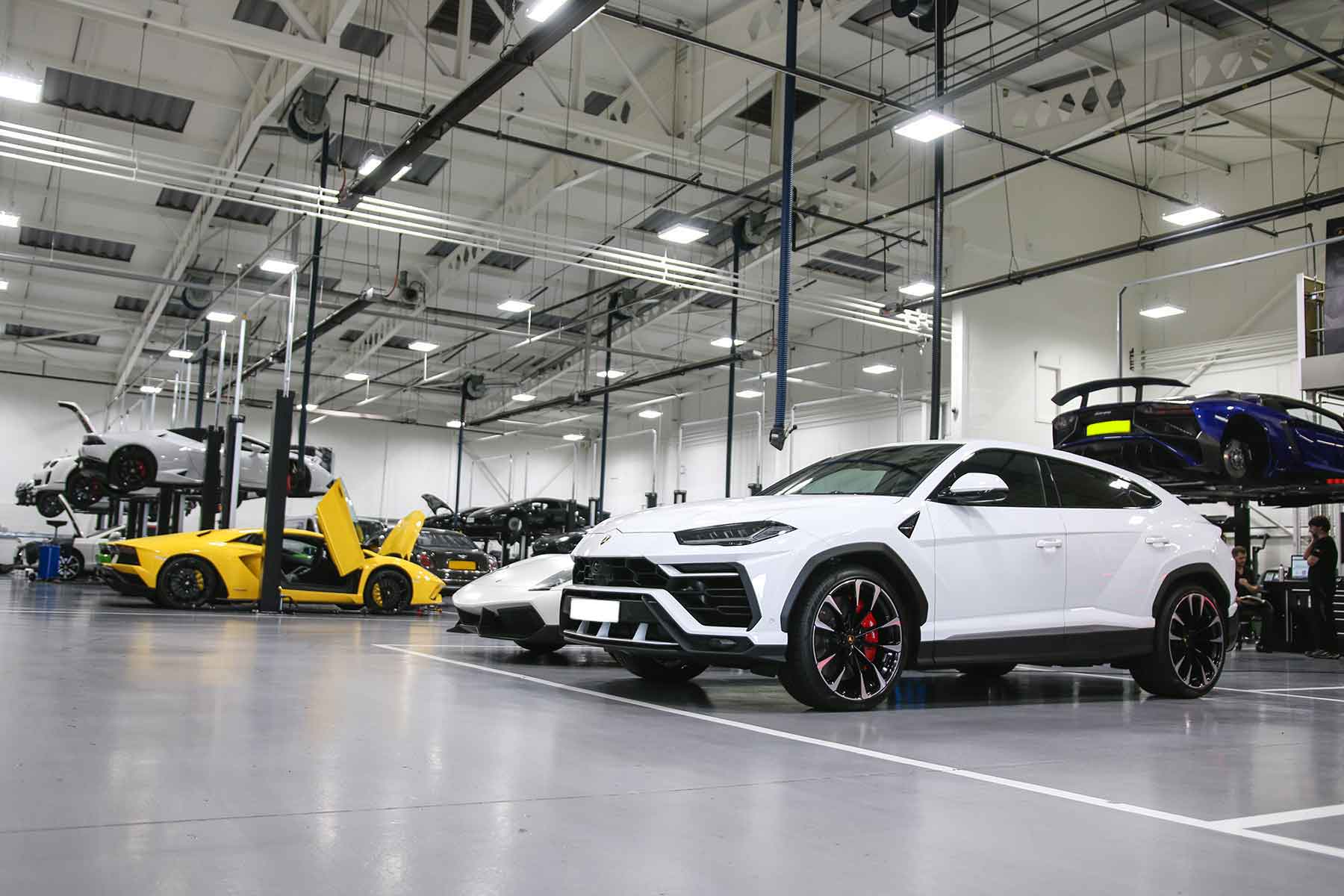 We start our tour with Lamborghini, where the first car spotted is a Urus. Launched earlier this year, the five-seat SUV is an altogether different type of Lambo – one expected to double sales.

“It’s proving very popular,” says Paul Staple, team leader for Lamborghini. “We’ve already taken lots of orders through our London showroom, with many of due for delivery before Christmas. Customers are migrating from Range Rovers and Porsche Cayennes.”

Other cars dotted around include a Gallardo, three Huracans, a new Aventador S and two Murcielago SVs. The latter starred in memorable episode of Top Gear, driven by Richard Hammond across the Dubai desert. 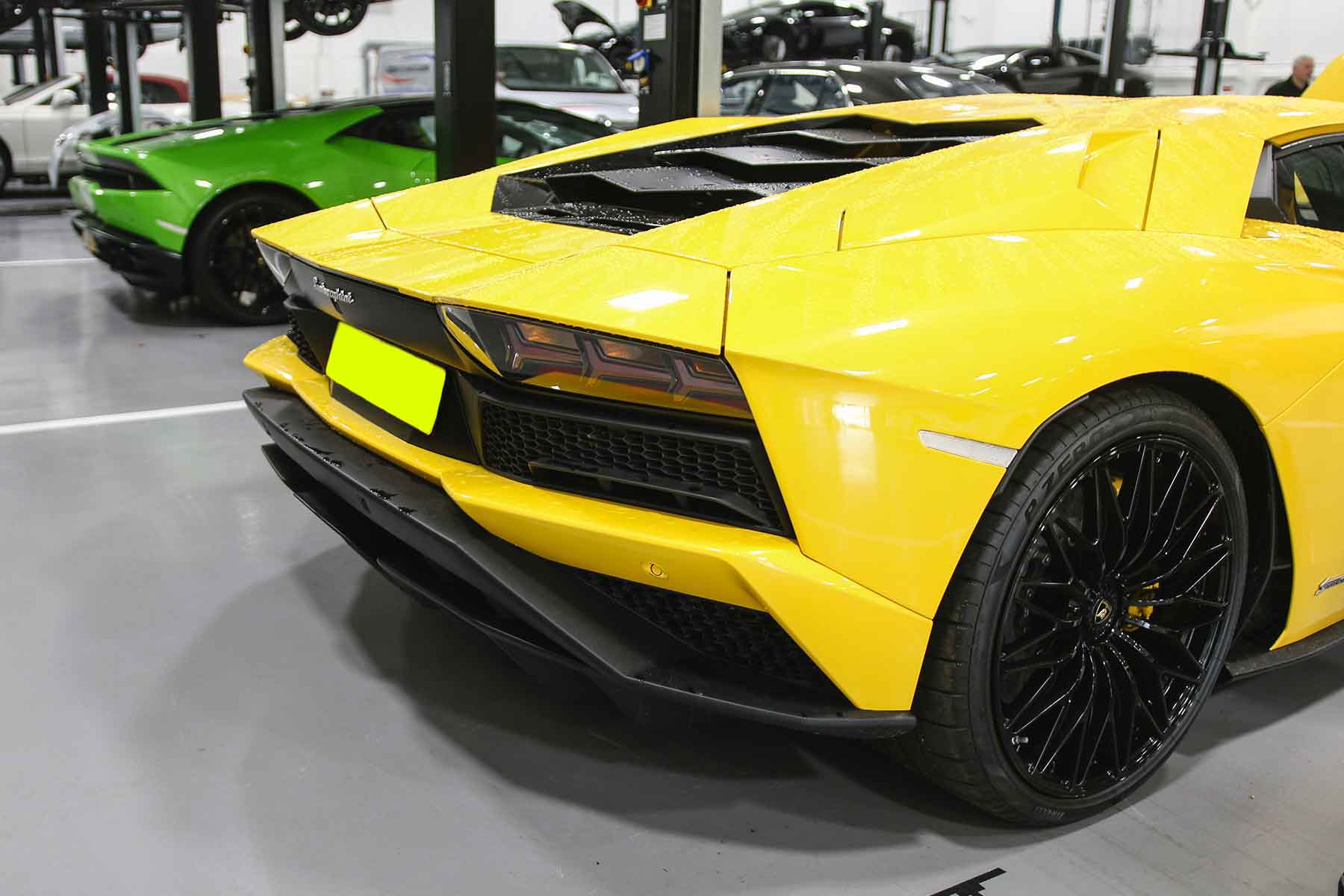 H.R. Owen’s workshop sees more Lamborghinis each year than the Sant’Agata factory itself, including “a handful of Countachs, but rarely anything older than that.” A full-carbon, £1.7m Centenario coupe – one of 20 made – is the most exotic car serviced to-date.

Working on Lamborghinis isn’t always straightforward, though, as Paul explains: “The mid-engined layout complicates things. Any issue with the gearbox means removing the engine first”. Servicing an Aventador takes a full day, versus a couple of hours for a typical car.

It’s important to remember, too, that these cars are high-performance machines, designed to be driven hard. Meticulous maintenance is vital.

All hail the hypercar: Bugatti 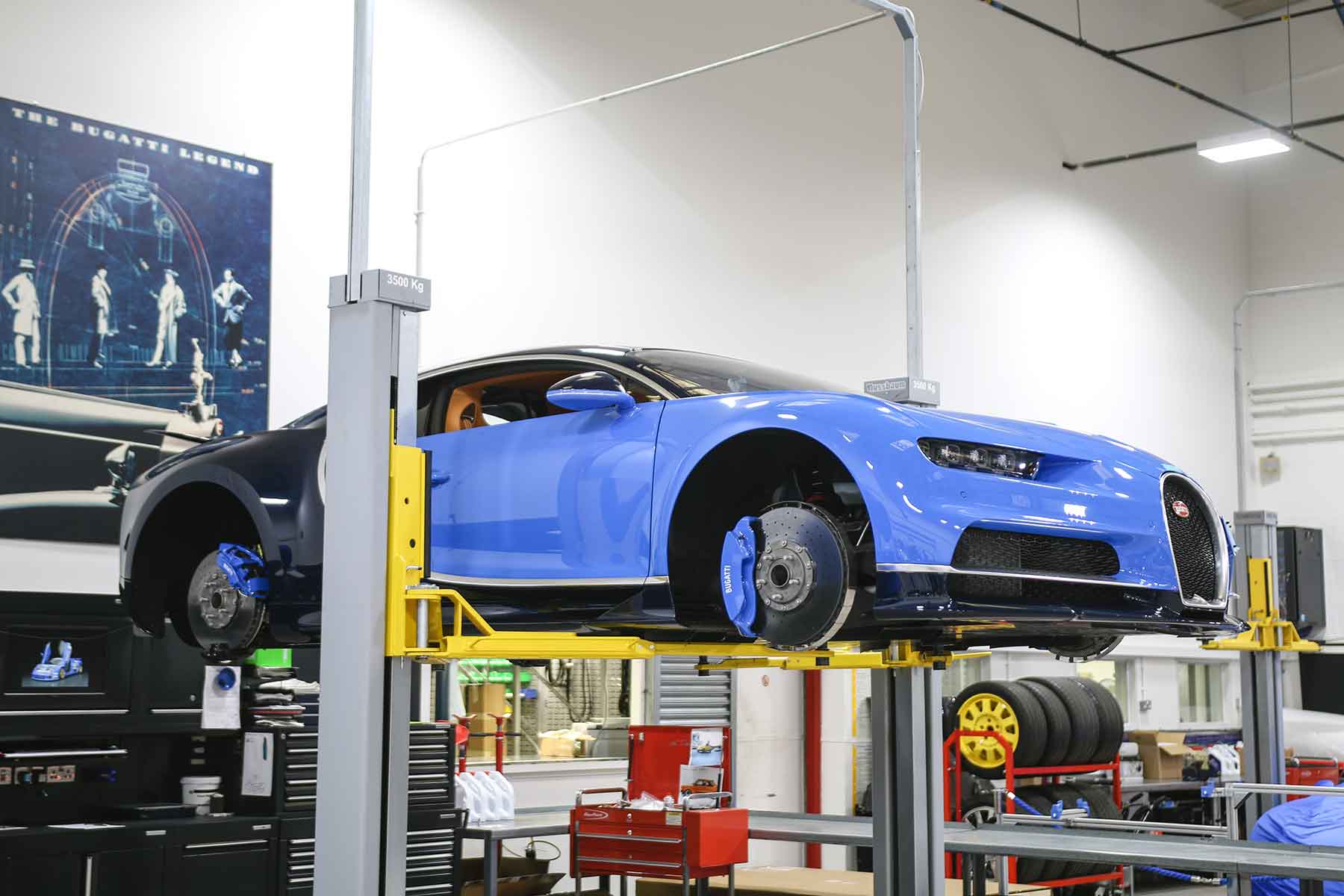 Even in a workshop full of Lamborghinis – with Rolls-Royce, Bentley and Maserati next door – the fenced-off enclave dedicated to Bugatti feels special.

Several Veyrons are concealed under covers, while technician Lui Cimino is hard at work beneath a new Chiron – the 1,500hp, 261mph hypercar that makes even an Aventador look anaemic.

Indeed, the Chiron is all about big numbers, whether it relates to performance or parts prices. Lui can’t divulge costs, but some rudimentary Googling suggests you’ll pay thousands of pounds for a single brake disc. 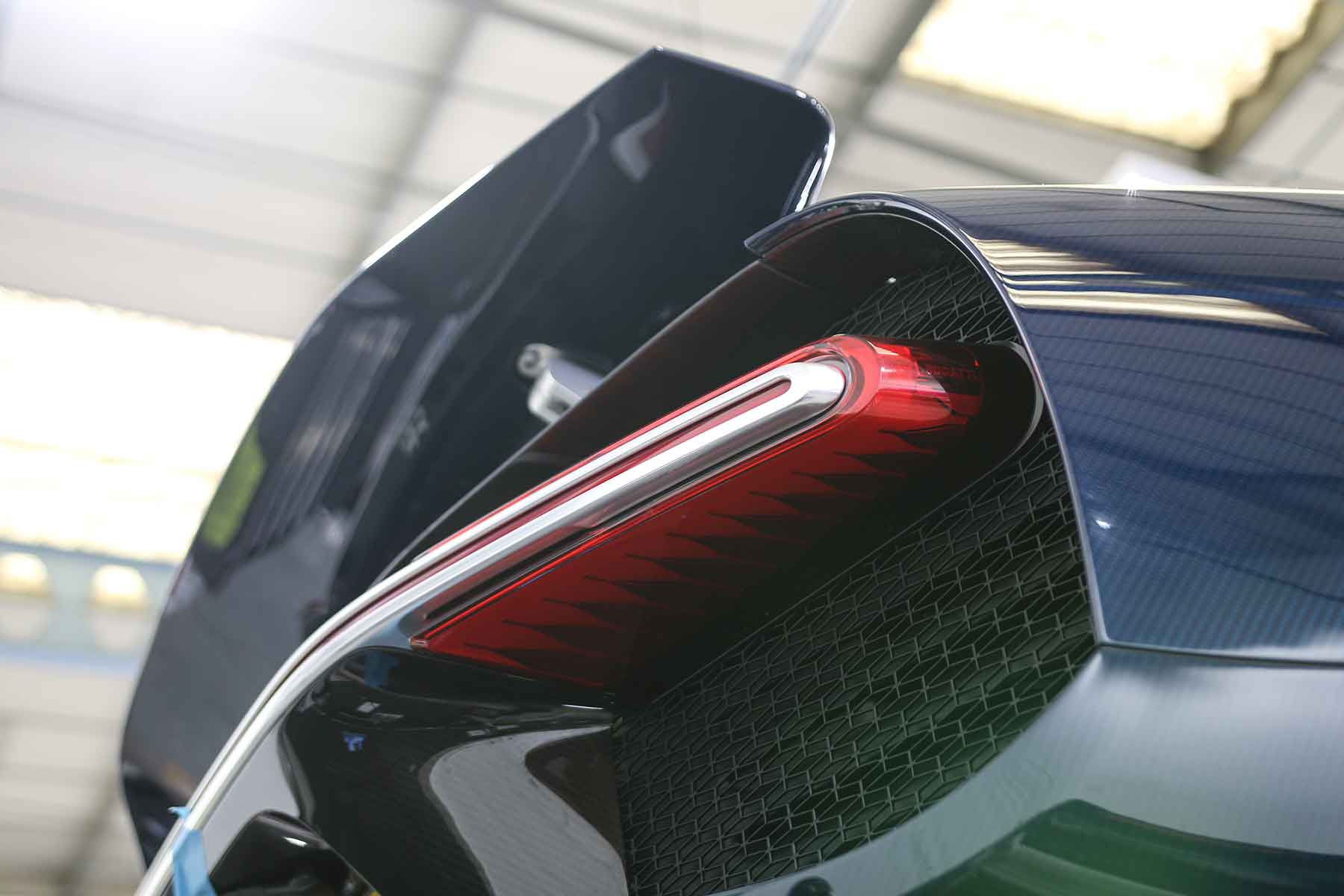 Having done his training at the Molsheim factory, Lui is acutely aware of the need for kid gloves. “You need to be so careful with the cars,” he explains. “Everything is very expensive, but that’s how you ensure it’s of the highest quality.”

Seven Chirons have already passed through Lui’s hands, with all work covered under Bugatti’s four-year all-inclusive deal. He recently worked on the final Veyron Supersport, too.

The highlight of Lui’s career, though, was servicing the classic EB110 LM and the EB110 SC GTS-1 racing cars, developed for Le Mans and the IMSA GT championship respectively.

Into the red: Ferrari 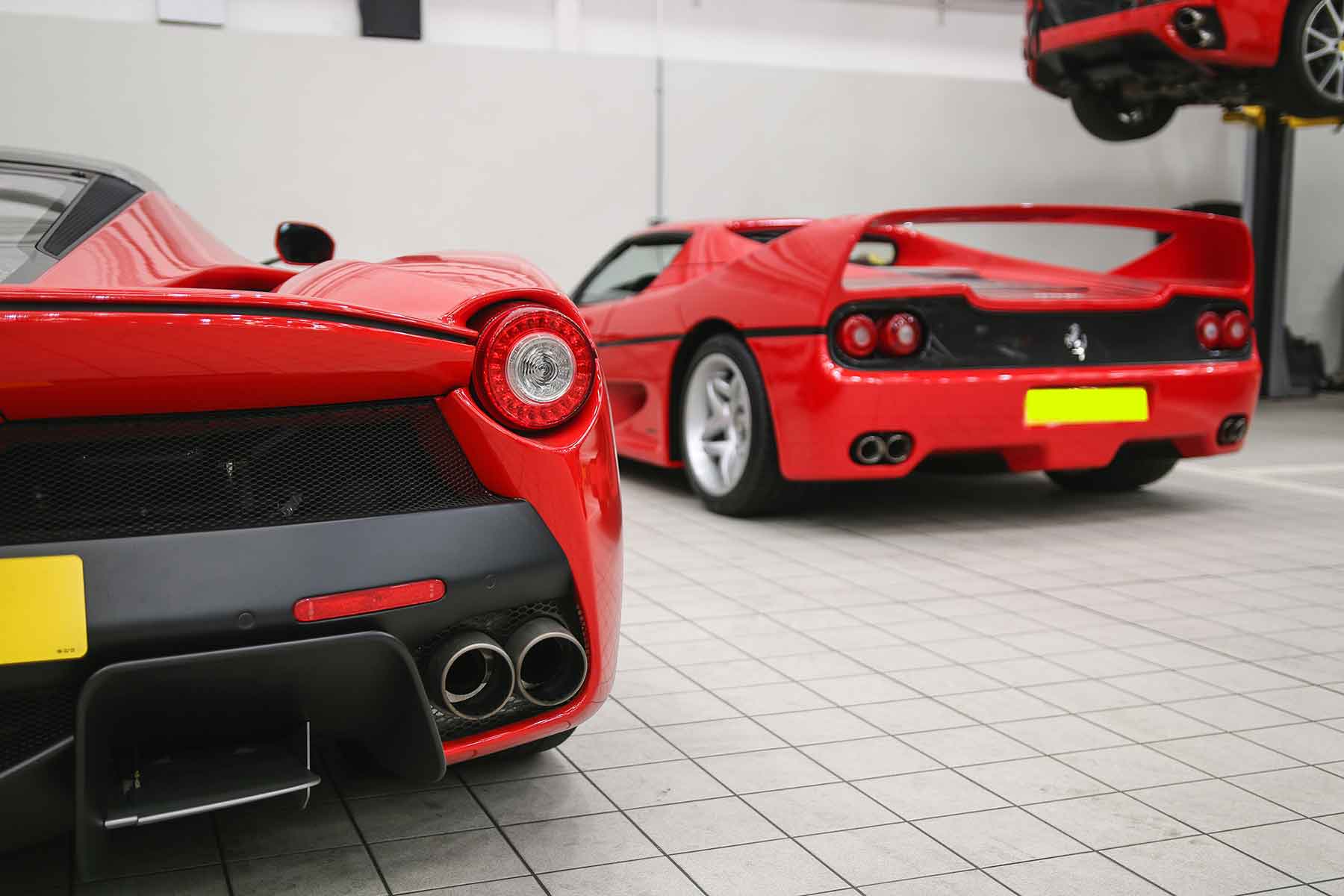 Our final stop is Ferrari. H.R. Owen has 22 servicing bays dedicated to Italy’s most famous export and, today, nearly all are full. Within minutes, we’ve spotted an F12 TDF, F50, 330 GT, Dino and two LaFerraris. There’s also a bespoke one-off built for a celebrity, about which we were sworn to secrecy.

Aftersales manager Tony Vaccaro is a lifelong Tifosi and visibly proud of his workshop and team. “My parents are from Italy, so I guess Ferrari is in the blood,” he says. “There’s just something about them.”

The 512BBi aloft on a ramp, he explains, is here for Classiche certification. This in-depth, factory-endorsed investigation of authenticity – from chassis numbers to the composition of body panels – has become a must-have for older Ferraris. “It can considerably enhance a car’s provenance, particularly with the market so focused on originality,” reckons Tony. 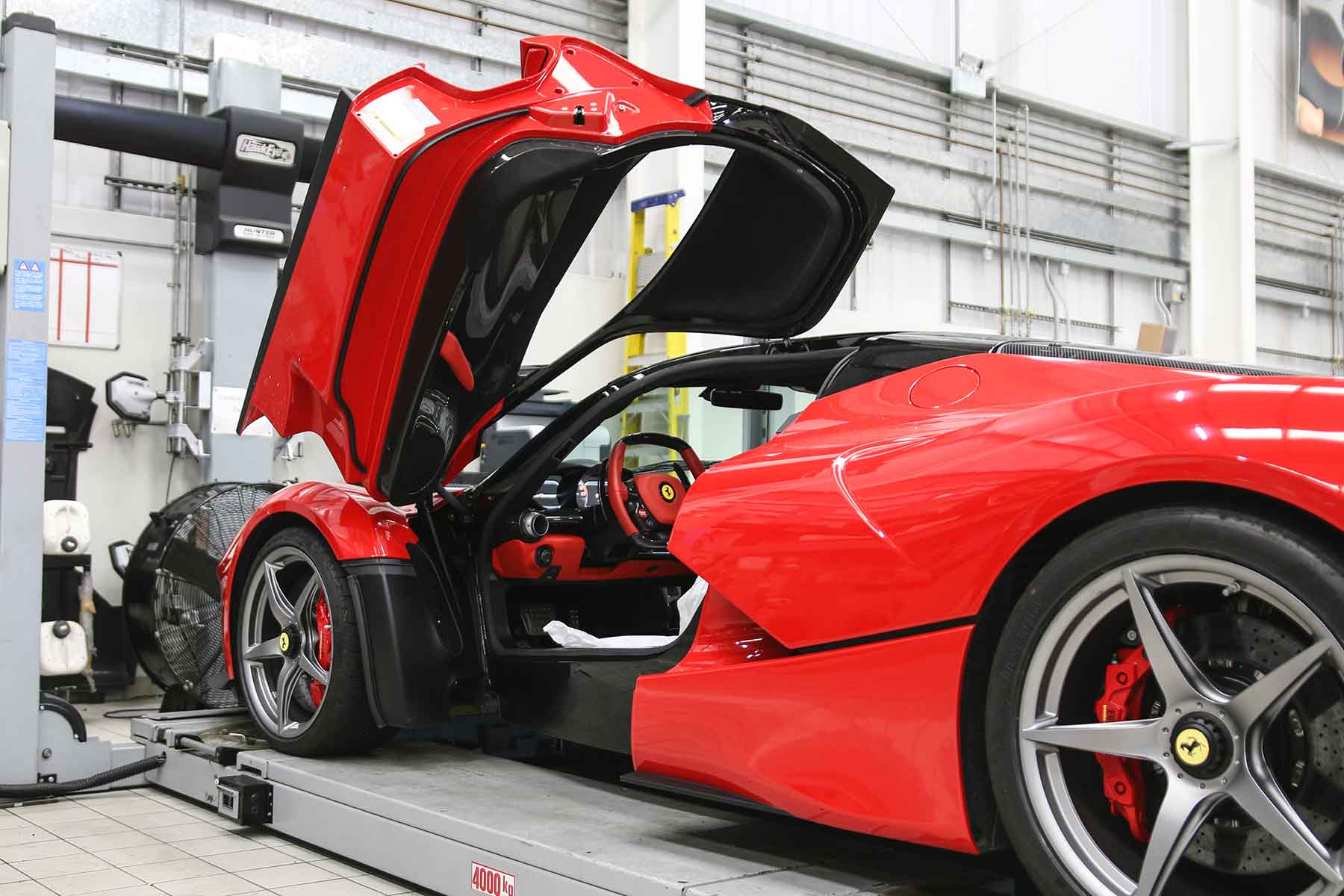 Working here requires a “pretty broad set of skills”, as mechanics may be working on a carburettor-fed classic one day, then a hybrid LaFerrari the next. Most staff have completed an apprenticeship with Ferrari North Europe – “the opportunity of a lifetime for a trainee mechanic”.

Many important Ferraris have passed through this workshop, but memorable cars include the 250 GT SWB raced by Stirling Moss and a very early 166.

Tony’s personal highlight was driving a GTC4Lusso to Maranello for Ferrari’s 70th birthday event. “I won’t forget that,” he says, “but every day working with Ferraris is special”.