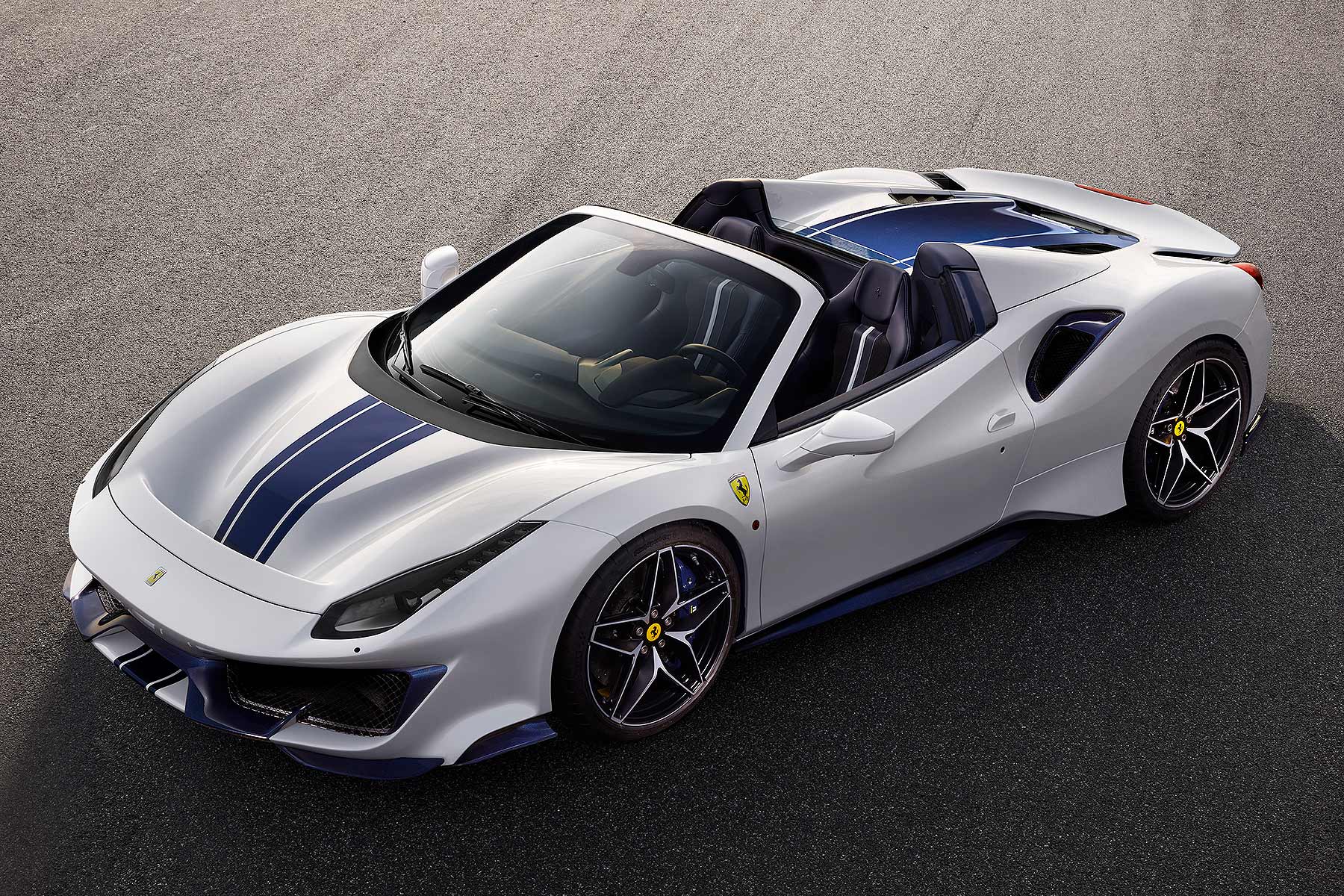 The open-top Ferrari 488 Pista Spider has been revealed at the 2018 Pebble Beach Concours d’Elegance. It is, fact fans, the 50th factory-built drop-top Ferrari in history.

Drawing from the 488 Pista coupe supercar, the 488 Pista Spider shares the same 720hp twin-turbo V8 engine, which Ferrari says sounds “even more riveting thanks to the open-top configuration”. 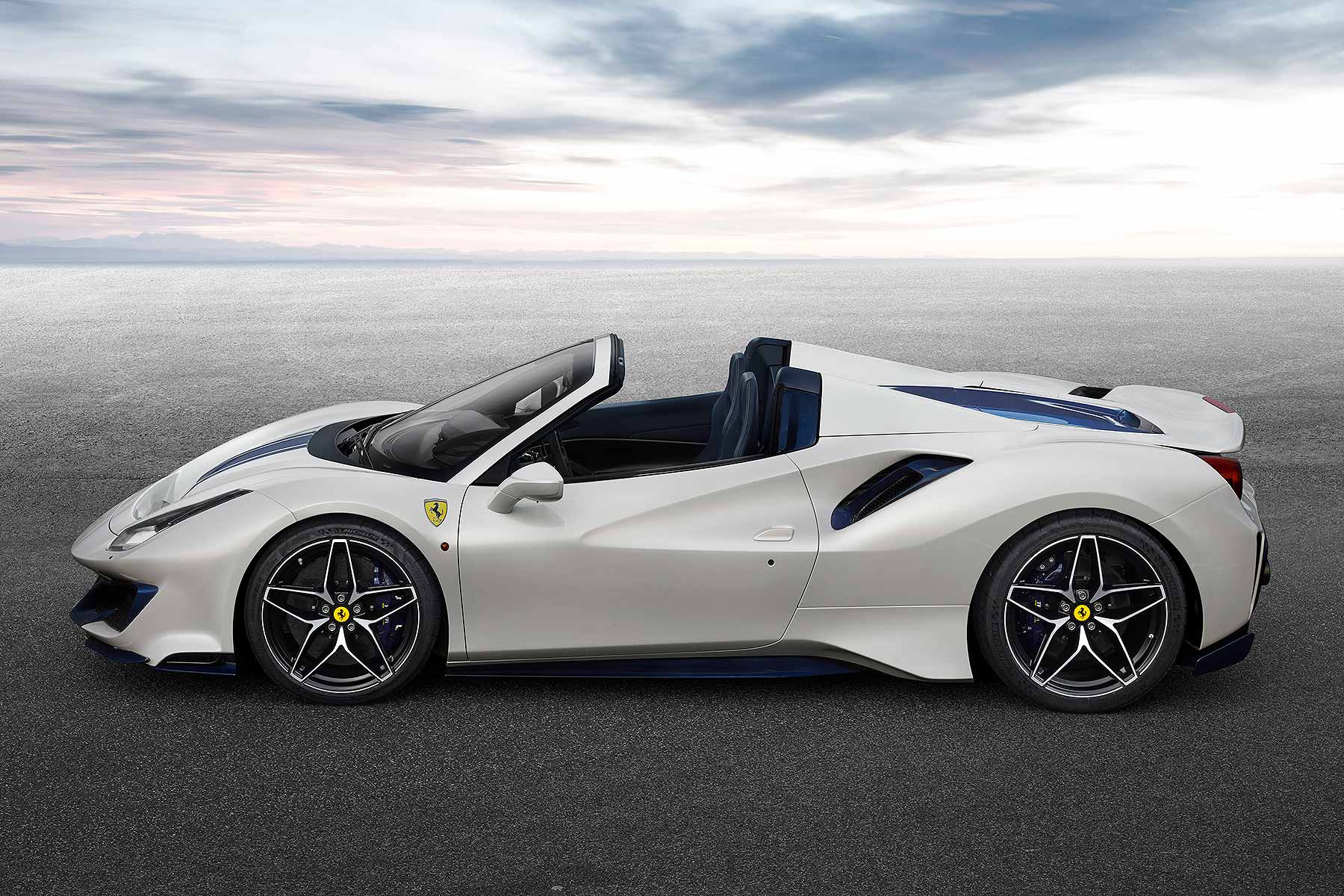 The Pista Spider does weigh 100kg more than the coupe, at 1,380kg, but that’s still roughly a 50kg weight saving over the regular 488 GTB.

It has all the exotic engine tech of the coupe: titanium conrods, lighter crankshaft, carbon fibre intake plenum and Inconel exhaust manifold.

The chassis is the same as the coupe too; as that drew from the 488 Challenge and 488 GTE racers, Ferrari claims the 488 Pista Spider “offers the highest level yet of technological transfer from the track to a road-legal drop-top car”. 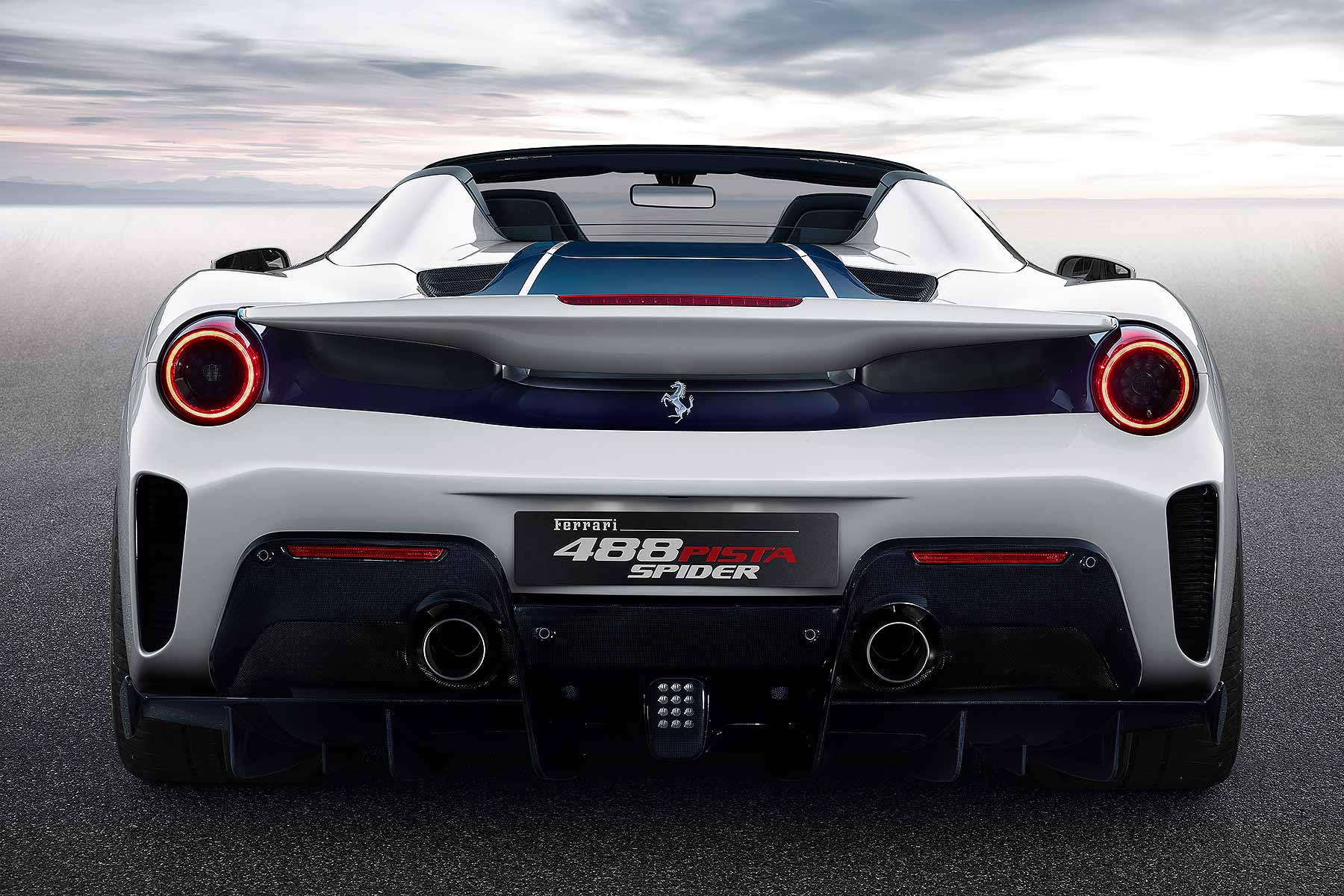 Key to it is the lateral dynamics control system called Ferrari Dynamic Enhancer (FDE). How this works is a little mysterious, but Ferrari describes it as managing the brake pressure at the calipers more accurately, so it’s easier to control the 488 Pista Spider when drifting sideways. Which sounds good to us.

The tyres being smoked are the same bespoke Michelin Pilot Sport Cup 2 rubber. 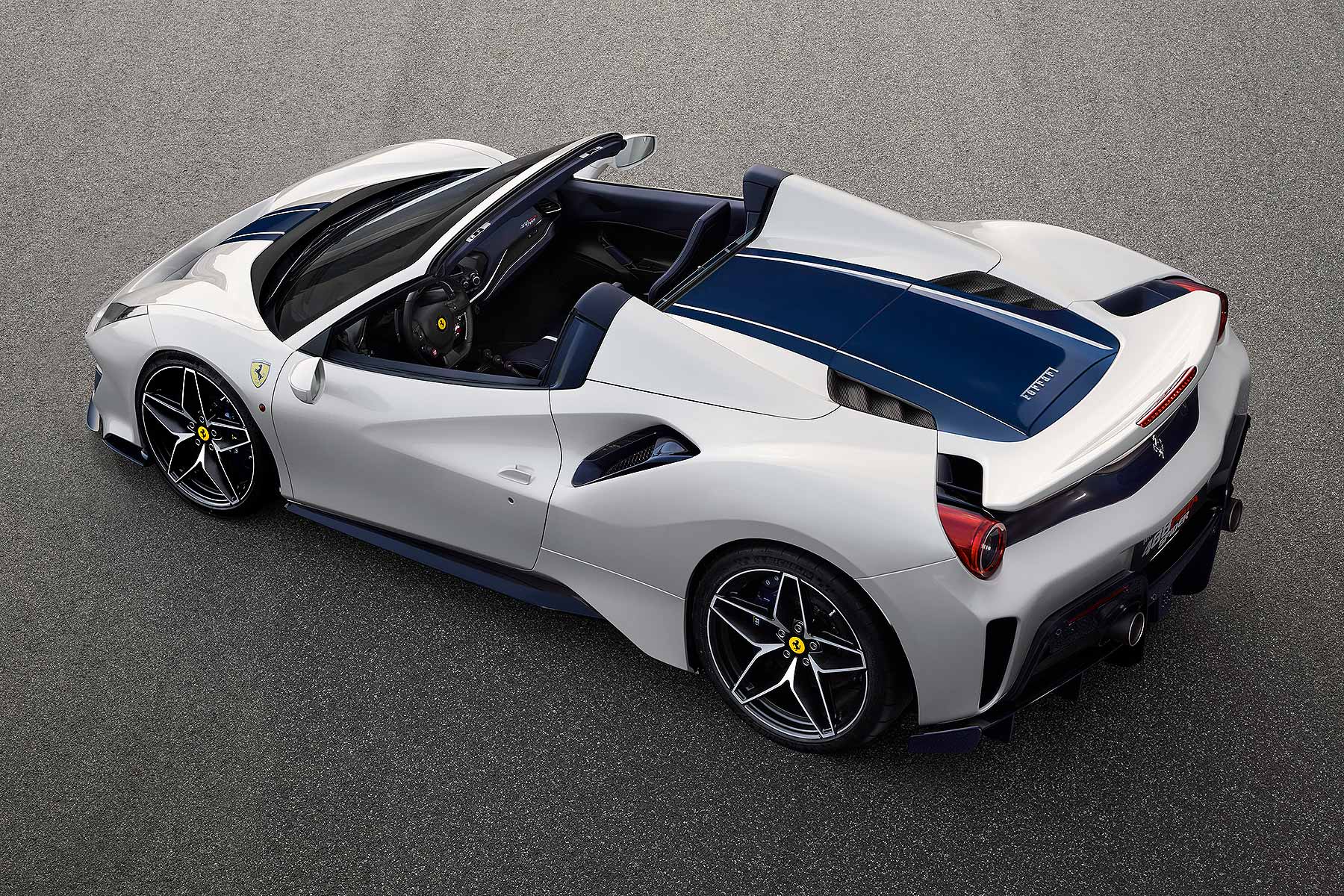 Driving purists can pick optional one-piece carbon fibre rims, which are 20 percent lighter than the standard wheels – an impressive weight saving, given how the regular wheels themselves are lightweight forged items.

As for the styling, the bespoke aero kit of the 488 Pista is largely present and correct; Ferrari’s focus here is on the “charismatic central livery” which runs from nose to tail. It expands towards the rear, finishing beneath the 488 Pista’s ample spoiler. 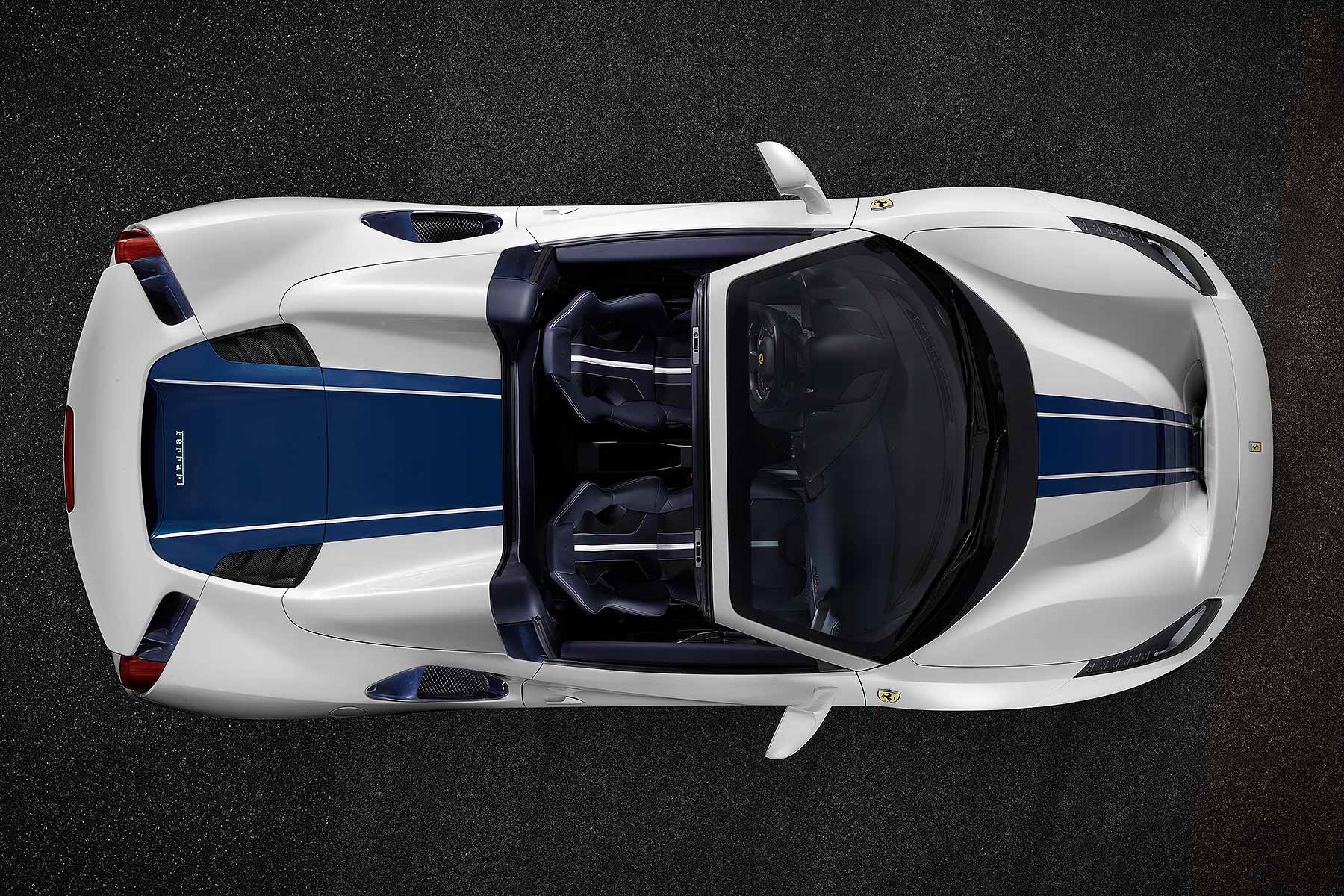 “This continual expansion of the stripe recalls the movement of the airflow and exalts the lines of the car,” we’re told. It is also different to the coupe, where the line runs right to the tip of the spoiler itself… and is all the more dramatic on the Pista Spider because there’s not an exposed engine bay breaking it up.

Which, we’re sure, will be all the justification 488 Spider coupe owners need to also make sure they’re also in the line for a 488 Pista Spider…