The new Seat Leon is here. The VW Golf's sharp-suited Spanish cousin is back with a new face, more space and hybrid power 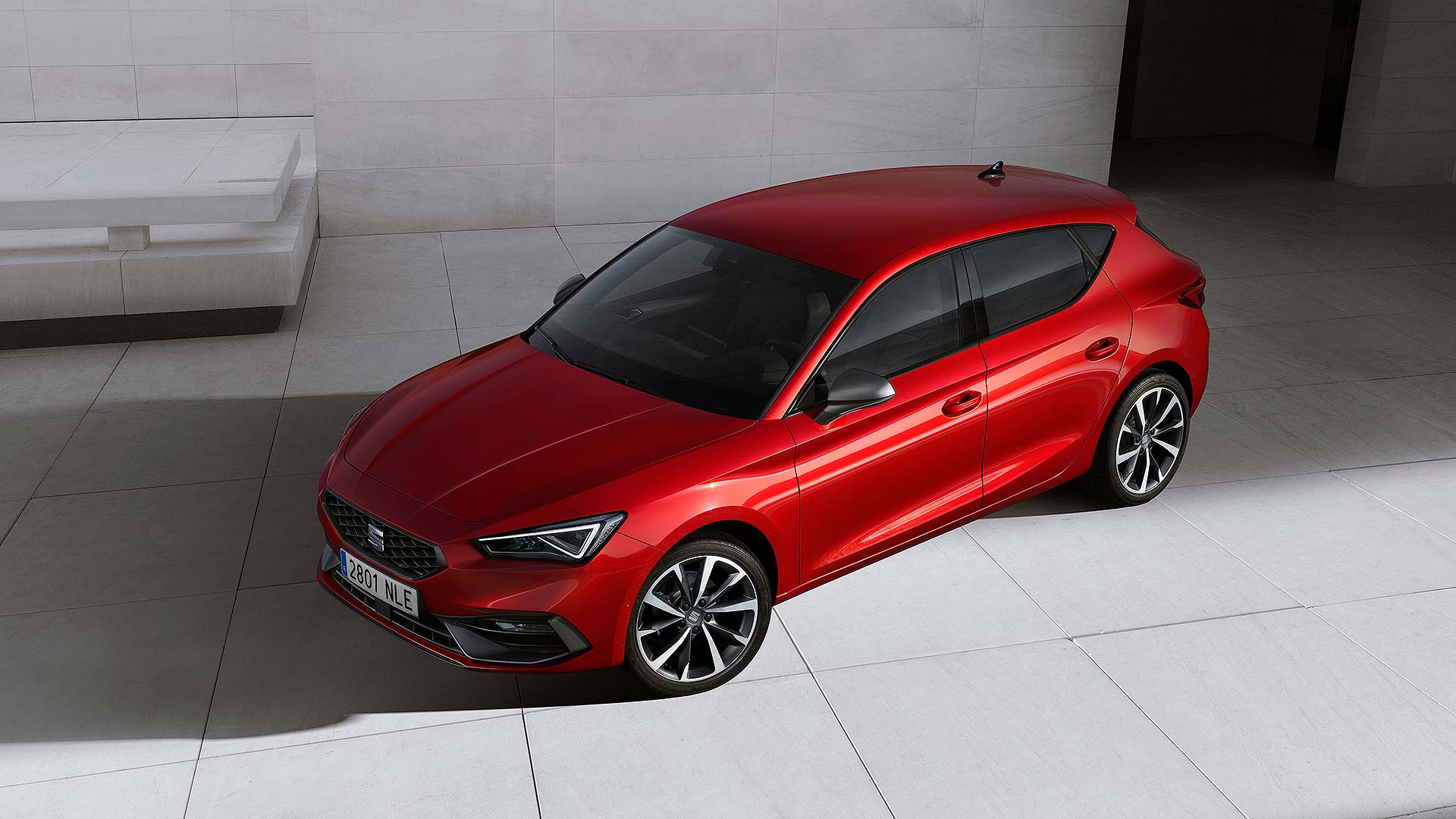 And yes, Seat enthusiasts, a high-performance ‘Cupra‘ variant is all but a dead cert.

The new Leon follows in the footsteps of 2.2 million of its predecessors, more than a million of which were the outgoing third-generation.

With every generation, the Leon has sold more, and Seat will be hoping this trend continues fourth time out. The Golf-sized family hatch is one of the marque’s most successful models, and a core part of its UK line-up. 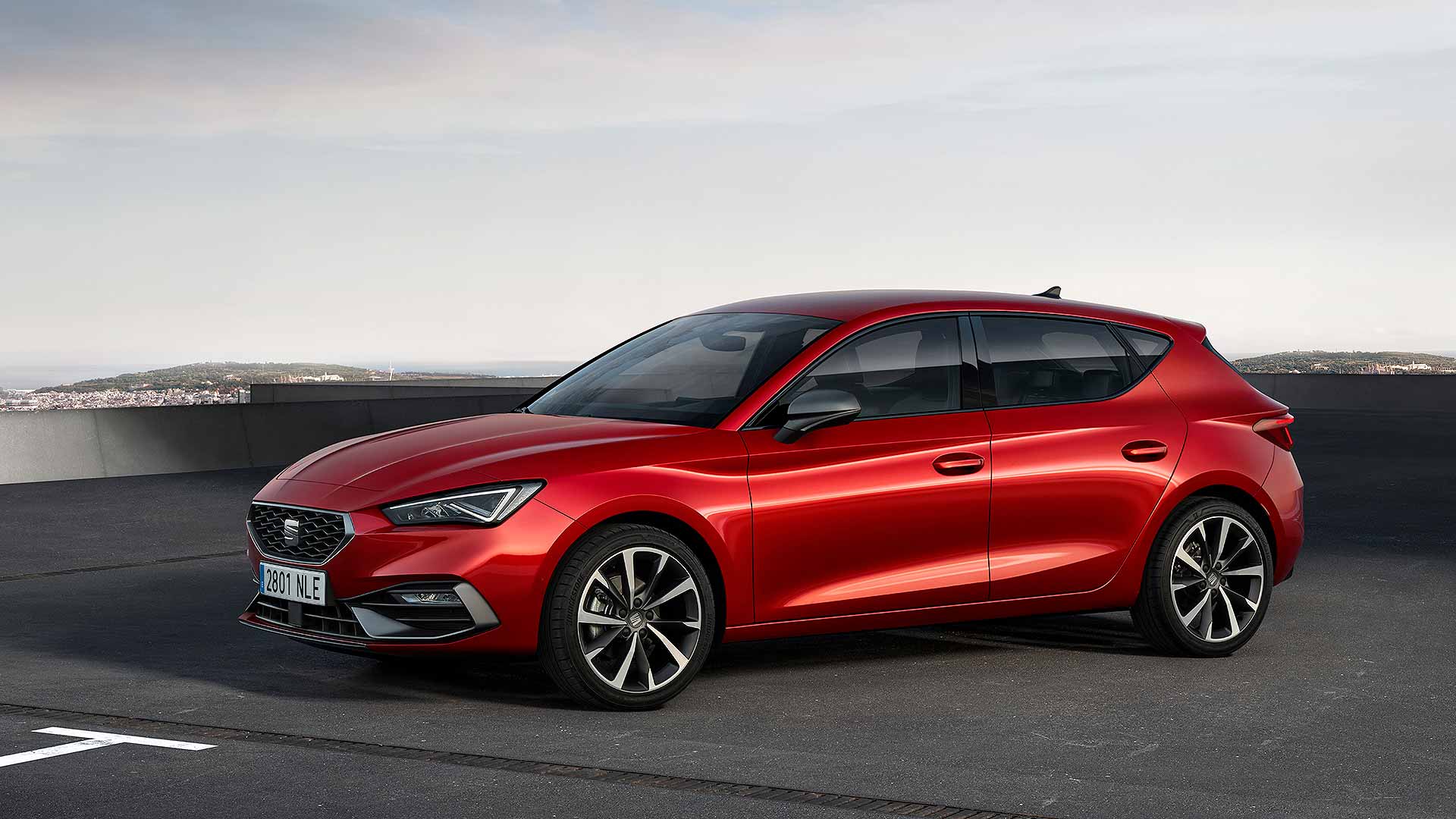 The Seat Leon’s role has long been the Golf’s slightly quirky Spanish cousin. Generally, Leons are sportier and aimed at younger drivers, and the new one looks to be no exception.

It remains one of the sharpest-looking hatches on the market. The new car follows Seat’s recent design direction closely, borrowing much from the recent Tarraco SUV. 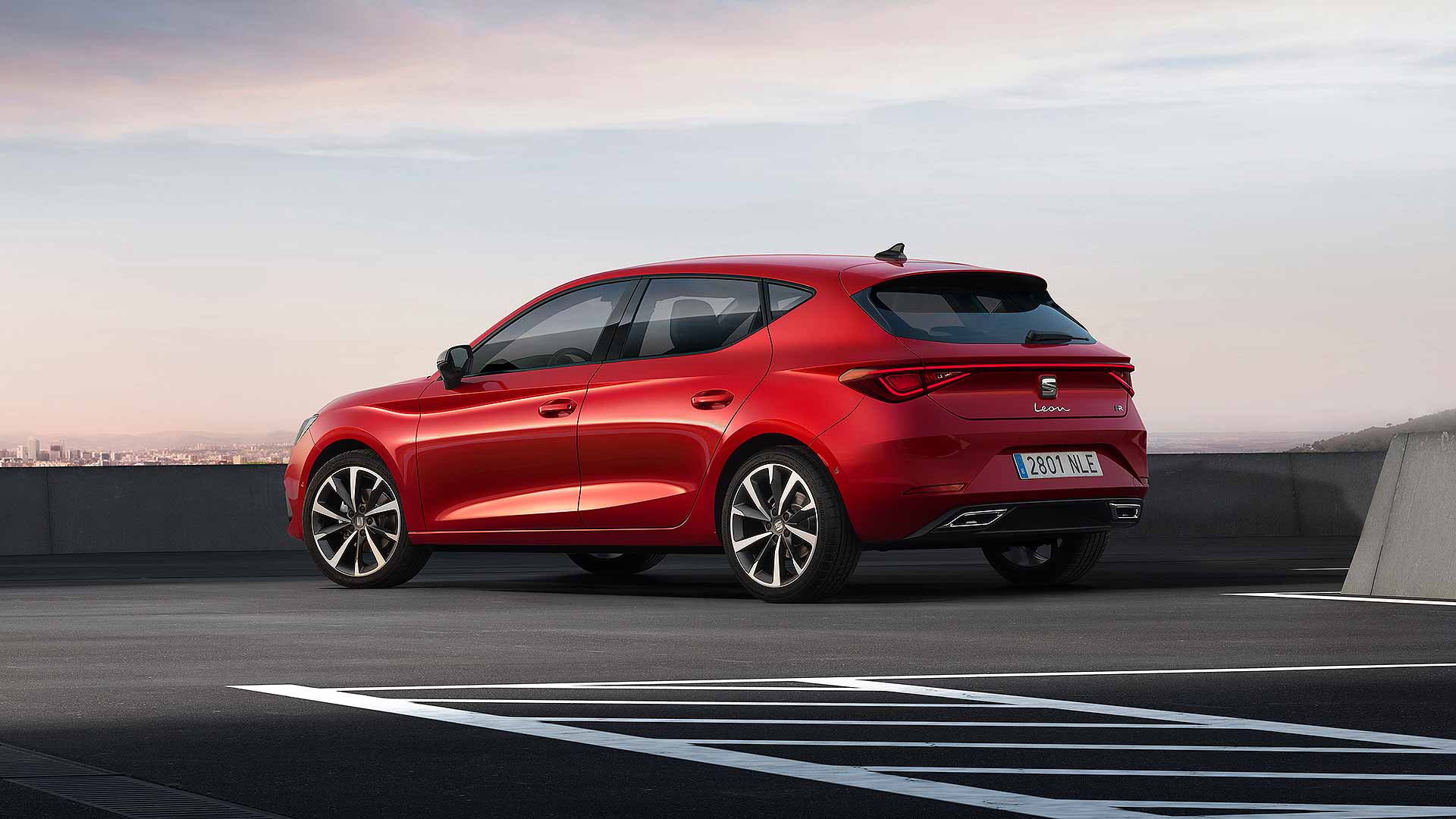 Happily, the Tarraco is a looker, and the Leon wears its styling tropes well. This include’s Seat’s new corporate snout and sharp LED lighting that has a “stronger three-dimentional connection”. There’s also a width-spanning “coast-to-coast” rear light bar.

The overall shape hasn’t changed much, but the changes that have been made add up to an eight percent improvement in aerodynamic efficiency.

Gone is the three-door option and, appearing for the first time, is a handwriting-style model badge script on the bootlid. We wonder, how many could be tempted away from the new Golf on looks alone?

Inside the new Seat Leon 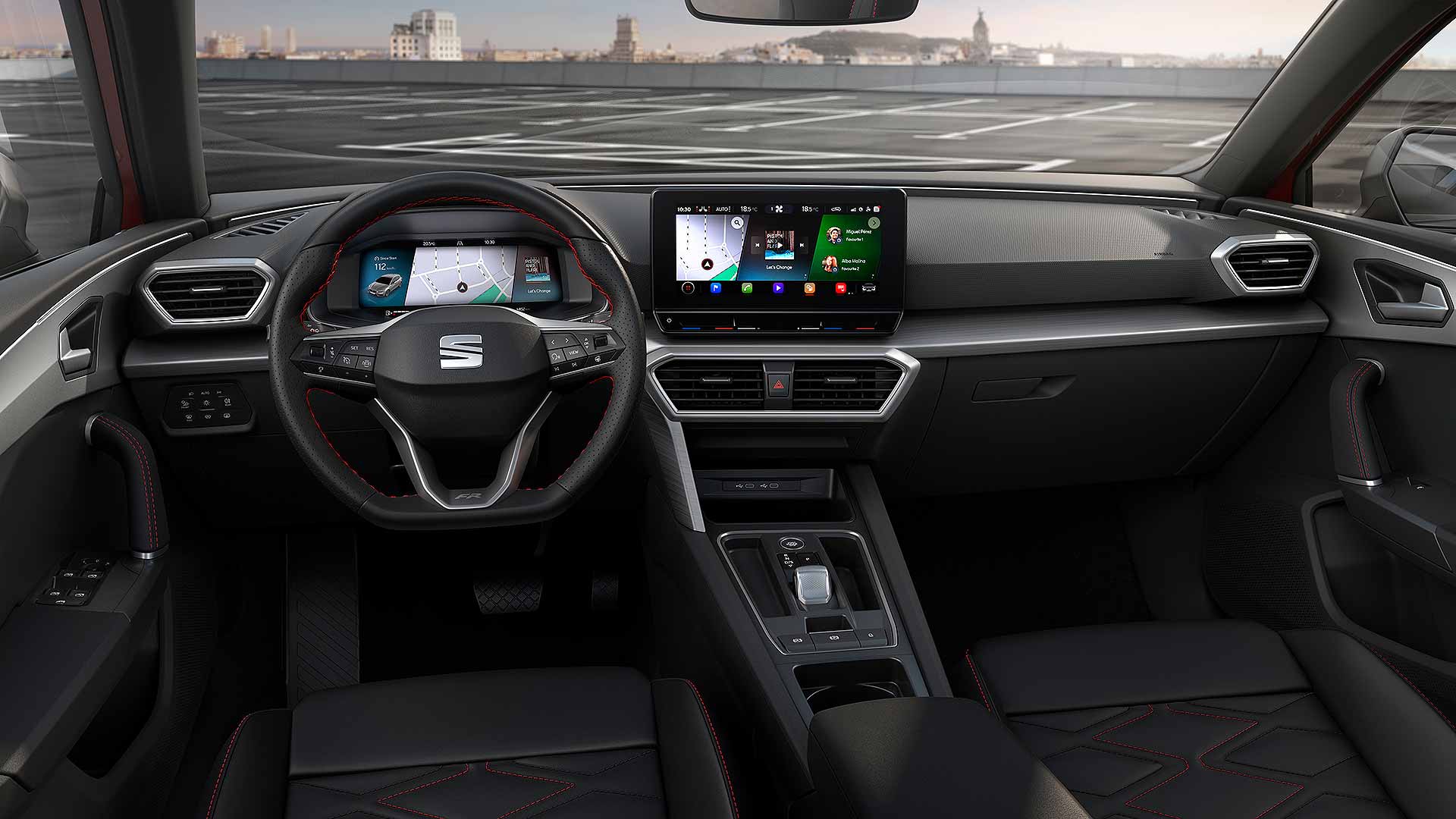 The new Leon’s relation to the Golf 8 is evident here, with the new infotainment screen canted towards the driver, and a similar-looking centre console. The screen, as standard 8.15-inches but available in 10.0-inch, isn’t quite as integrated as the Golf’s, sitting atop the centre of the dashboard.

Standard on all but the entry model is the new Seat Digital Cockpit, with a 10.25-inch fully-customisable instrument cluster.

The new Leon is Seat’s first fully-connected vehicle, with wireless Apple CarPlay and Android Auto on board, and vehicle data monitoring via an app when outside.

For the plug-in hybrid model, you can even manage battery charging and control the electronic air conditioning. An ecosystem of connectivity and apps is expected to grow, so the Leon will get cleverer as it gets older, too.

Many will be happy to note that wireless phone charging is now available in the Leon. 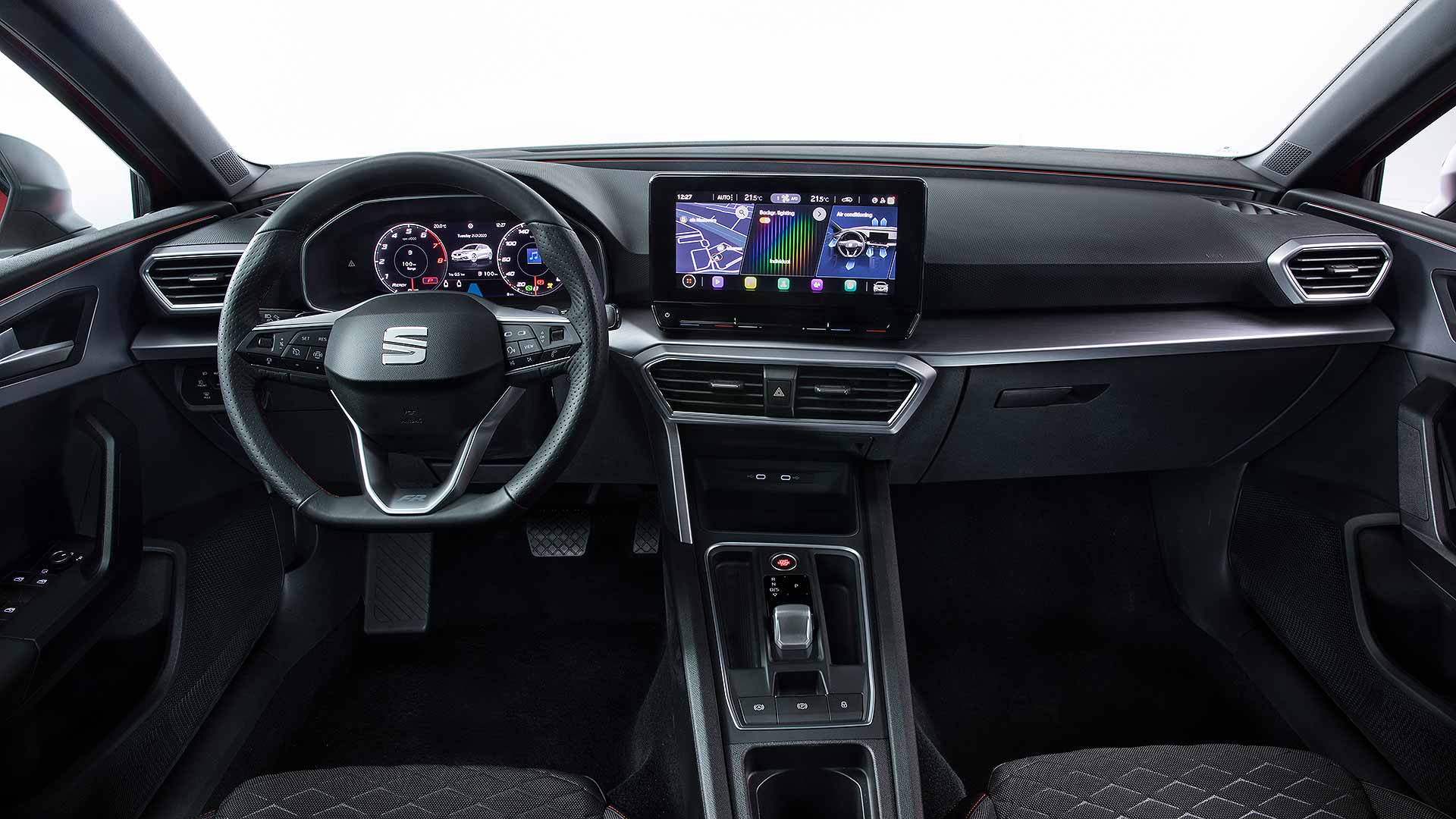 New for the Leon is semi-autonomous capability. That means cruise control that combines information from a front-mounted camera and GPS data to recognise traffic signs, bends, roundabouts, junctions, speed limits and built-up areas.

Take your hands off the wheel and it will continue driving itself. However, within 15 seconds, you’ll get a bong and a warning flashing up on the dash. If you don’t put at least one hand back on the wheel, a braking jolt is given, and if needed, it’ll bring the car safely to a stop.

Seat has made a big deal of the ambient lighting in the cabin, with a configurable “unbroken arc of light” running the width of the top of the dash, and through the doors. It’s also functional, with blind spot detection signals coming via the strip, too.

In terms of practicality, the hatch retains the third-generation car’s 380-litre boot capacity. The estate, however, ups its capacity by 30 litres over before, to 617 litres.

Both the estate and hatch are longer, by 93 mm and 86 mm respectively, which should translate to a roomier cabin, too. Interestingly, it’s slimmer, by 16 mm. 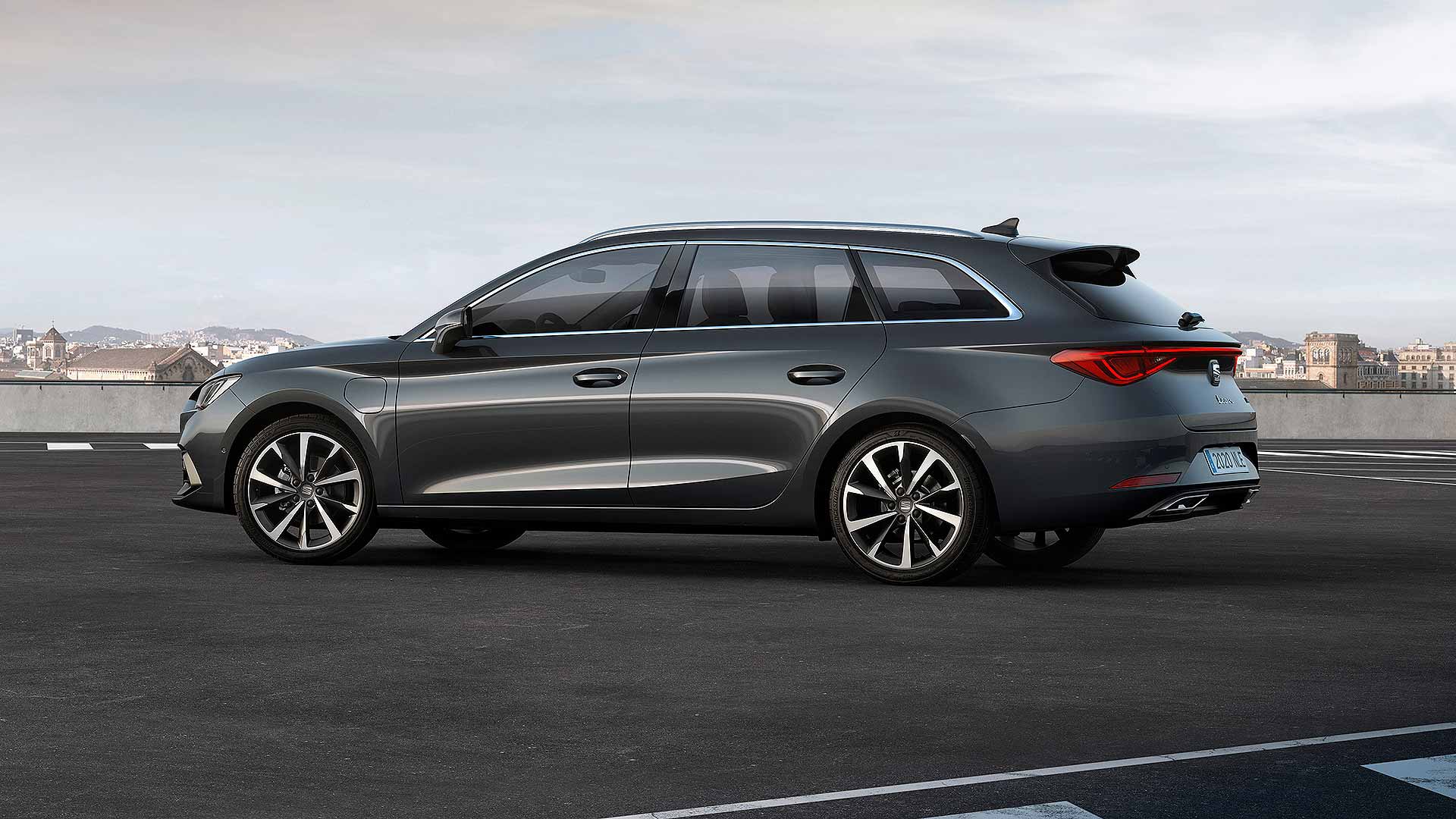 Speaking of the plug-in hybrid, that’s probably the headline-grabbing addition to the engine range. Called eHybrid (not quite the same as Porsche’s nomenclature), it combines a 1.4-litre TSI petrol engine with an electric motor, and a 13 kWh battery.

It has a heady 204 hp, that goes to the wheels via a six-speed DSG gearbox.

On the other hand, it can drive without producing any emissions at all, with a 38-mile electric-only range. Charging is via a 3.6 kW AC inlet, allowing it to be fully charged in under four hours.

Plug-in hybrid buyers won’t be restricted to the hatch, either. Both the hatch and estate will be offered with eHybrid variants. 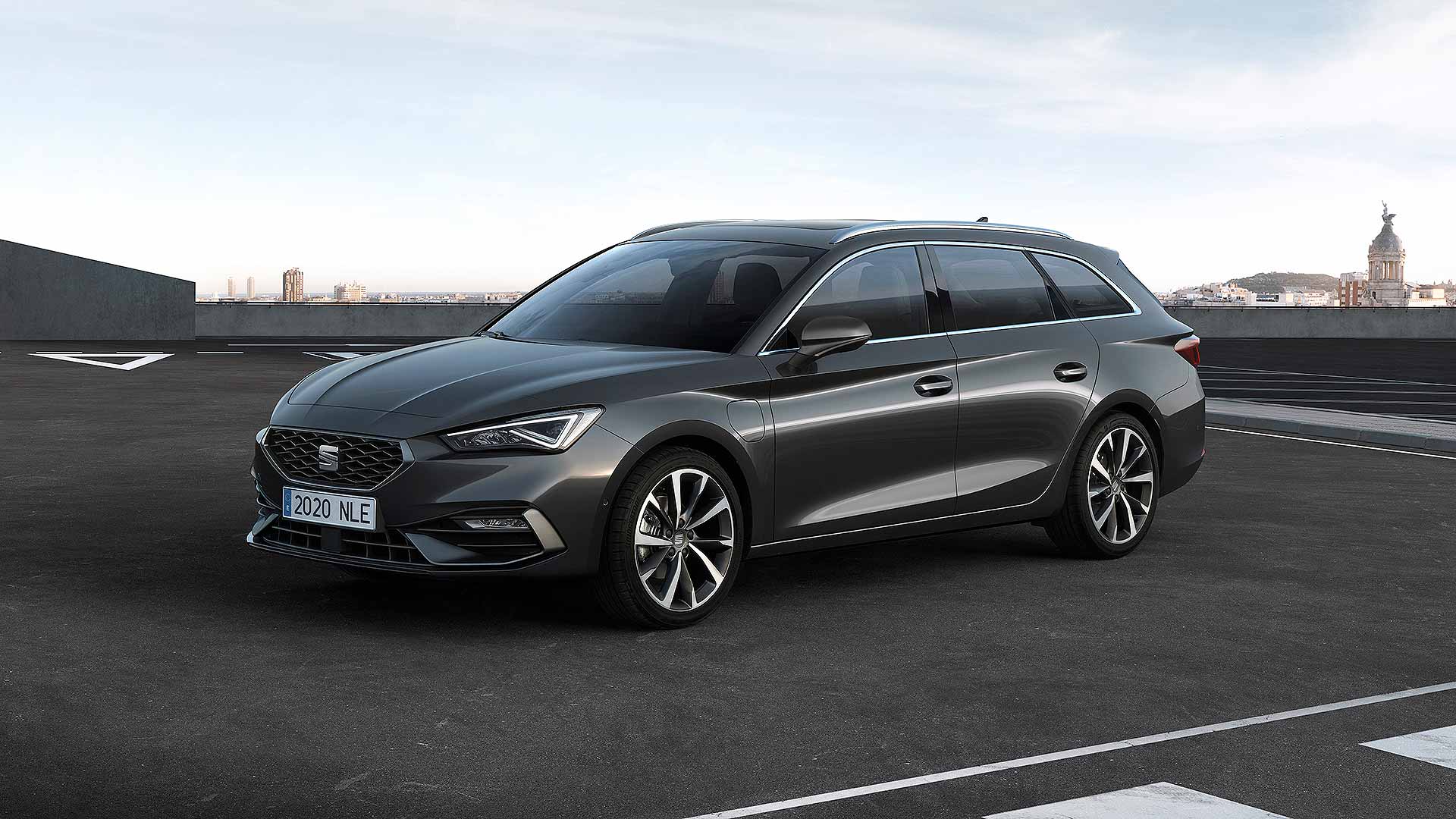 For those not quite as dedicated to the cause of electrification, a mild-hybrid (eTSI) joins the range. The system is optional with the 1.0-litre three-cylinder and 1.5-litre four-cylinder TSI models, with 110 hp and 150 hp respectively.

It’s a 48-volt starter-generator system that allows engine-off coasting, adds torque under initial acceleration and can regenerate power under braking. The overall result should be that the engine is off for more of the time via the stop-start system, thus reducing fuel consumption and emissions.

A 130 hp variant of the 1.5-litre TSI is also available, albeit without the option of mild hybrid assistance. Overall fuel efficiency is claimed to be improved by on the 1.0 and 1.5-litre engines, optimising valvetrain control.

At the top of the petrol tree is a 2.0-litre TSI with 190 hp and inevitably, more powerful variants with a Cupra badge will follow.

Diesel is hanging on in there, too, with two 2.0-litre TDI engines completing the lineup. NOx emissions are down for the 115 hp and 150 hp units, thanks to the addition of AdBlue injection tech. In a broad stroke, the engine range is very similar to that found in the new Golf.

What trim levels does the new Leon come in? 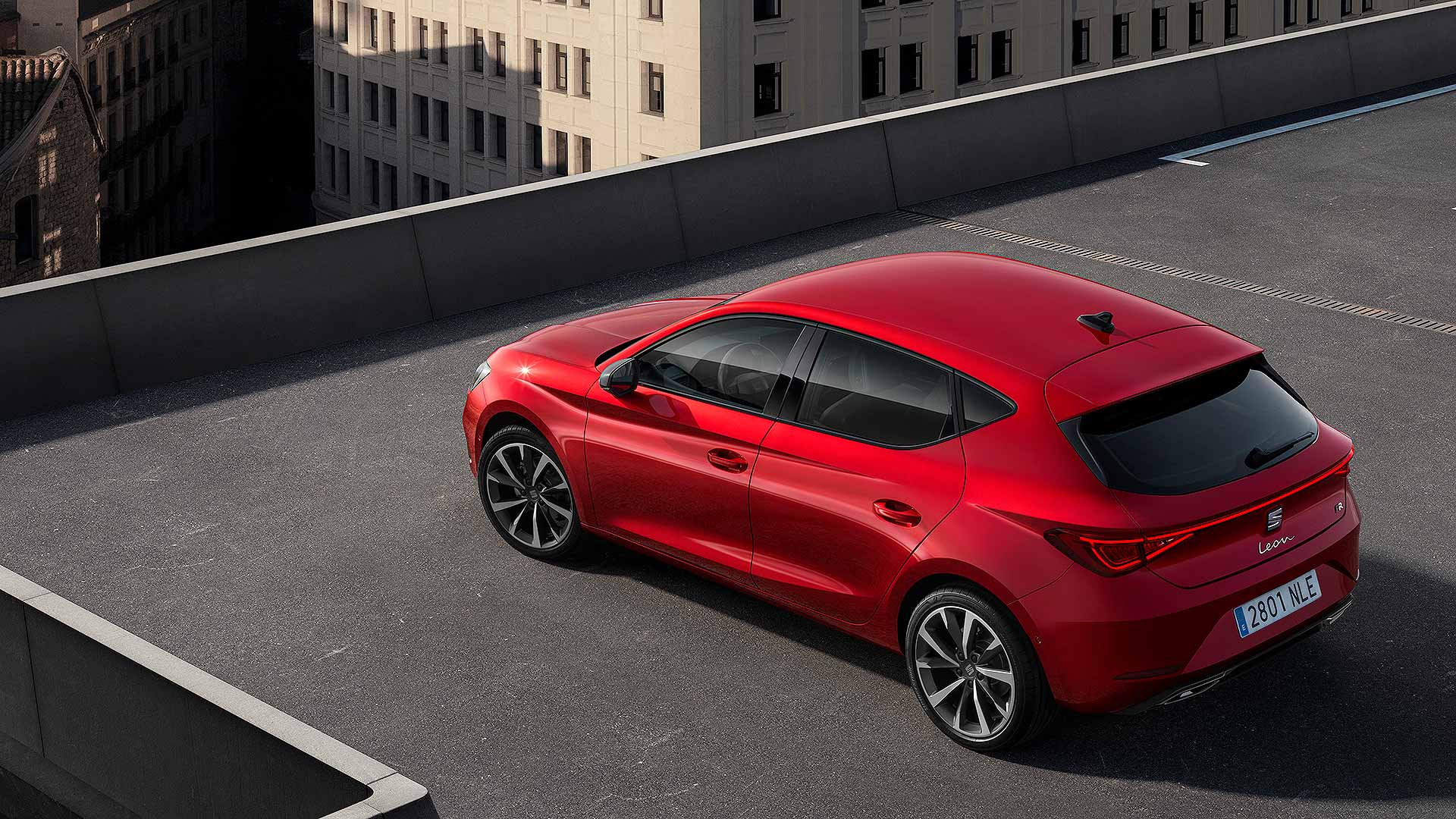 As standard on all are kelyess entry and start, two USB points, LED headlights with automatic high beam, electric and heated mirrors, a leather steering wheel and Seat Connect. If that’s all you need, the SE will do you well.

The 10.0-inch infotainment system and digital instrument cluster join the cabin on the SE Dynamic, as does front and rear parking sensors, tinted windows and larger 17-inch wheels.

FR models, as you might imagine, add sportier looks, in the form of more aggressive bumpers, dual exhaust pipes, and 15 mm lower ride height. That sportiness carries to the inside, too, along with some added tech. Climbing the range from there adds more tech and luxurious elements.

How much is the new Leon and when can I have one? 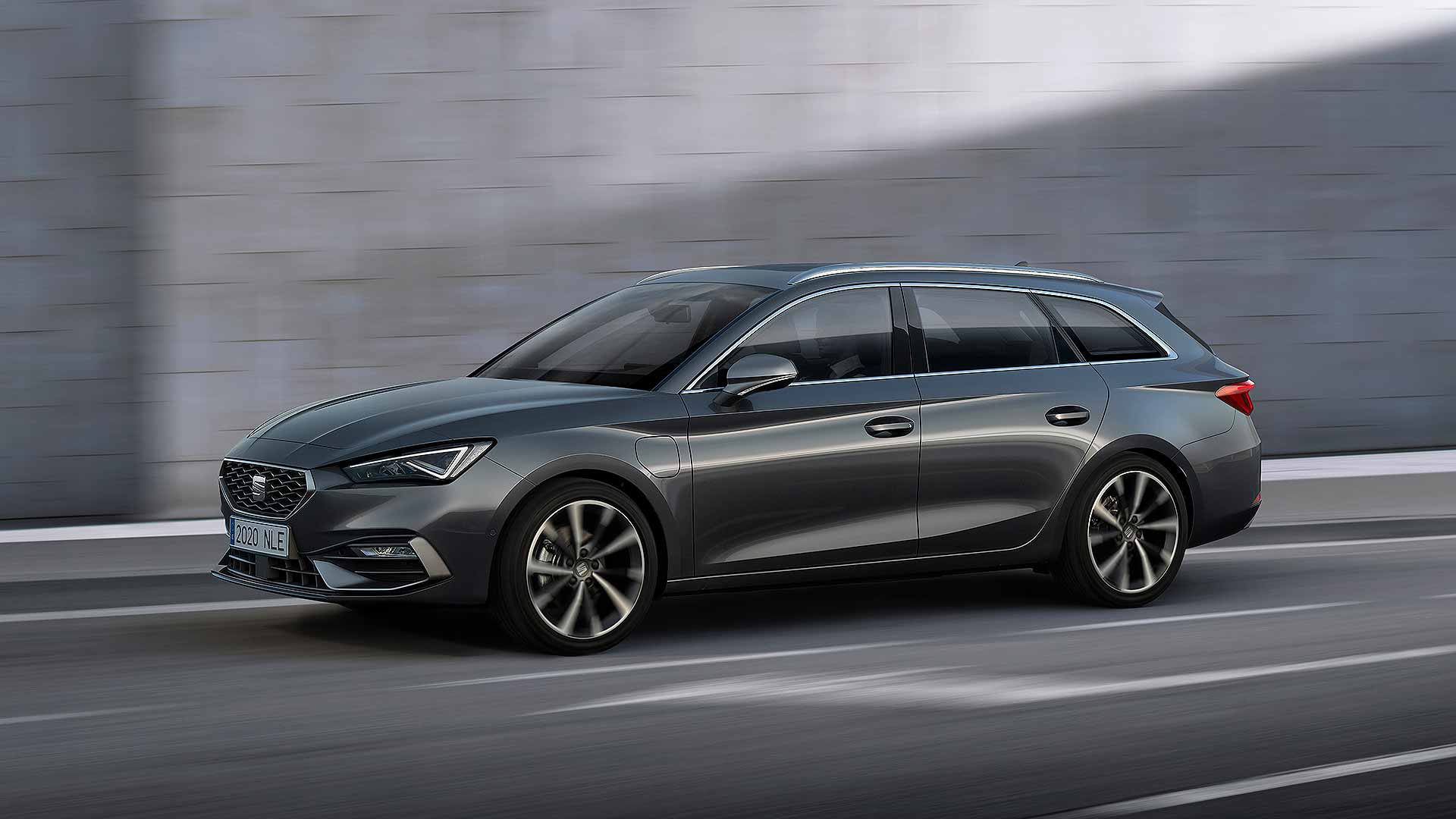 SE, SE Dynamic and FR variants can be ordered now, although pricing has yet to be announced. Those who want FR Sport, Xcellence or Xcellence Lux specifications will have to wait until April before they can get their name down.

As for the Cupra version? Well, sportiness is a Seat trump card. Indeed, with Cupra branching off as a brand of its own, we expect the hot version to come sooner rather than later, and to pack some serious punch.

YouTube has revealed its most-watched adverts of 2019. Among heavy-hitters like Amazon, Apple and Bosch, we find Hyundai USA.
Read more
Car Reviews

The DS 7 Crossback is the flagship SUV from the fledgling French brand. It majors on design flair, but falls short on the road.
Read more
Car News

A fleet of 27 hydrogen-powered Toyota Mirai taxis has driven a cumulative one million miles on the roads of London, saving 206 tonnes of CO2.
Read more
Car News

We explain how carry larger animals, such as dogs, in your car safely – including using a boot crate and seatbelt harness.
Read more
Advice

Wide and slow: a shocking two horses are killed EVERY WEEK on UK roads, which is why it's important to pass a horse and rider safely.
Read more
Advice