The Polestar 1 is a 600hp carbon-bodied plug-in hybrid designed to get this new brand noticed. Are you paying attention yet? 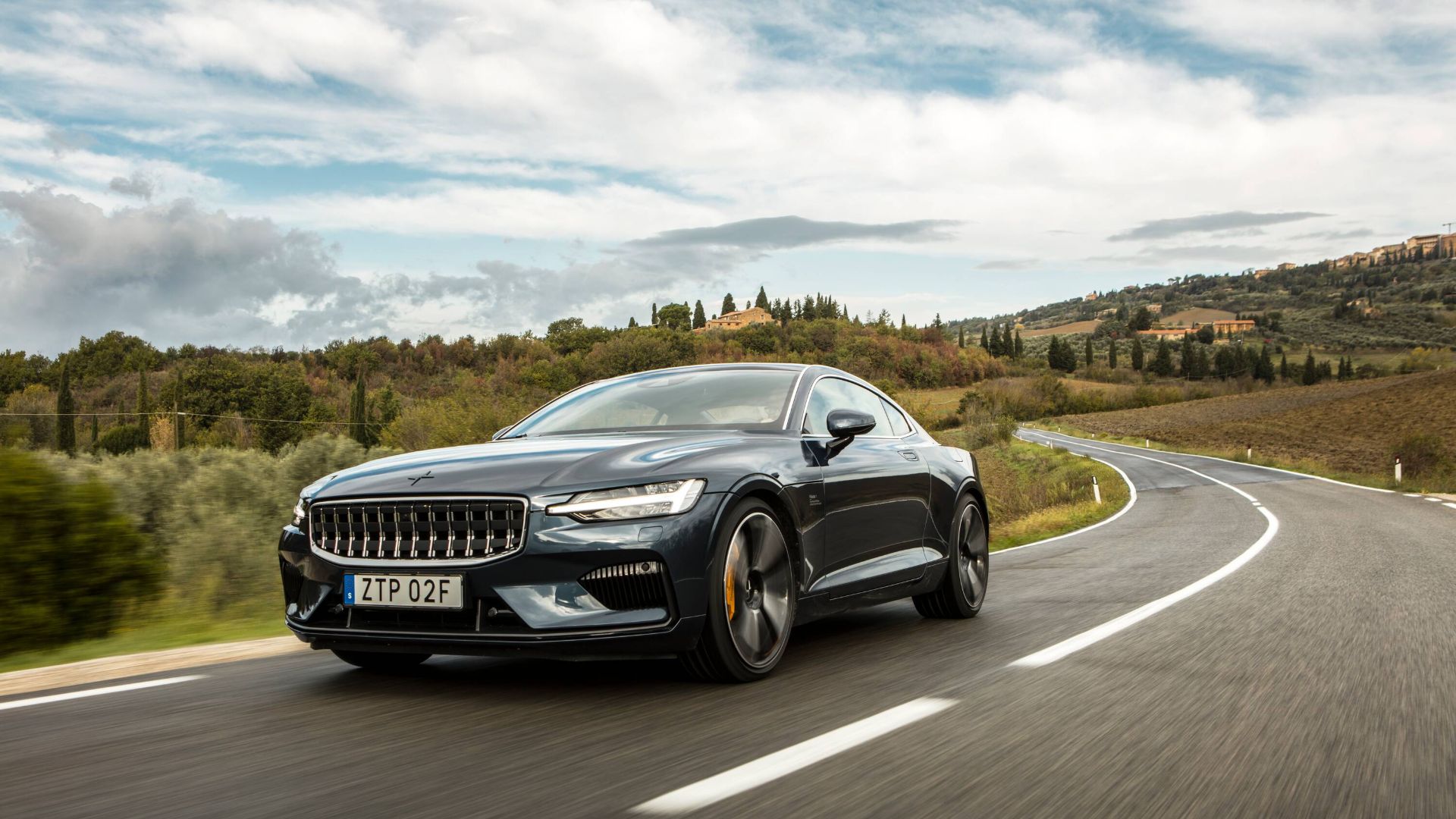 Make a splash with a supercar, then make money with an SUV. That’s how to launch (or relaunch) a car company in 2020: a strategy Lotus, Maserati, Pininfarina and Polestar have all subscribed to. The Polestar 1 is the first part of this plan, a sparkling apéritif before the main meal. With a carbon fibre body and plug-in hybrid drivetrain, the Swedes certainly haven’t watered it down.

Polestar started as Volvo’s go-faster sub-brand – think AMG to Mercedes-Benz – but has evolved into a standalone marque (albeit still next-door to Volvo in Gothenburg and under the umbrella of Chinese parent, Geely). Design and tech focused, with a green conscience, it aims to take on Tesla with a range of premium electric cars. As the 2030 ban on new petrol and diesel cars looms, Polestar could be the right brand at the right time.

And so to the ‘1’. If this car’s mission is to thrust Polestar into public consciousness, consider it accomplished. During its week in my care, I’m stopped and questioned every day by people curious to know more. Never have I driven a car that sparked more conversations with strangers. Social distancing? Not in a Polestar 1.

Interestingly, one elderly gent likens the ‘cross’ badge to Citroen’s double chevrons – a view shared by the French courts, which have temporarily banned Polestar from using its logo there. 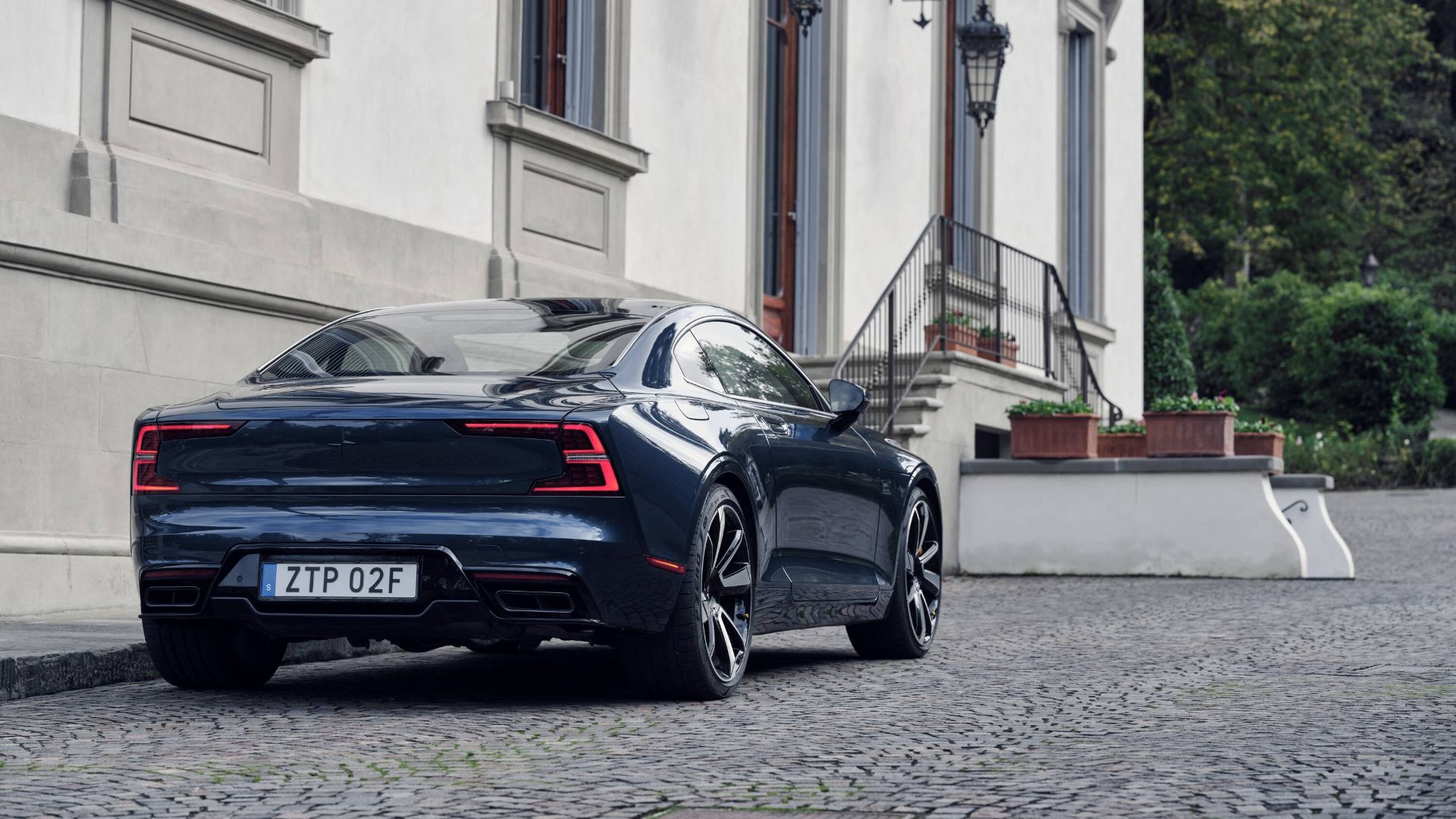 Legal wrangles aside, this is a fabulous piece of design. An elegant roofline and pronounced haunches evoke the classic Volvo P1800, as driven by Roger Moore in The Saint, while the 21-inch alloys radiate concept car cool.

That price tag puts the Polestar up against some formidable EVs, including the Porsche Taycan Turbo S and Tesla Model S Performance, plus more conventional rivals such as the Bentley Continental GT and Mercedes S-Class Coupe. Fortunately, beneath that svelte carbon skin, the 1 is far more than simply a Volvo in a prom dress. 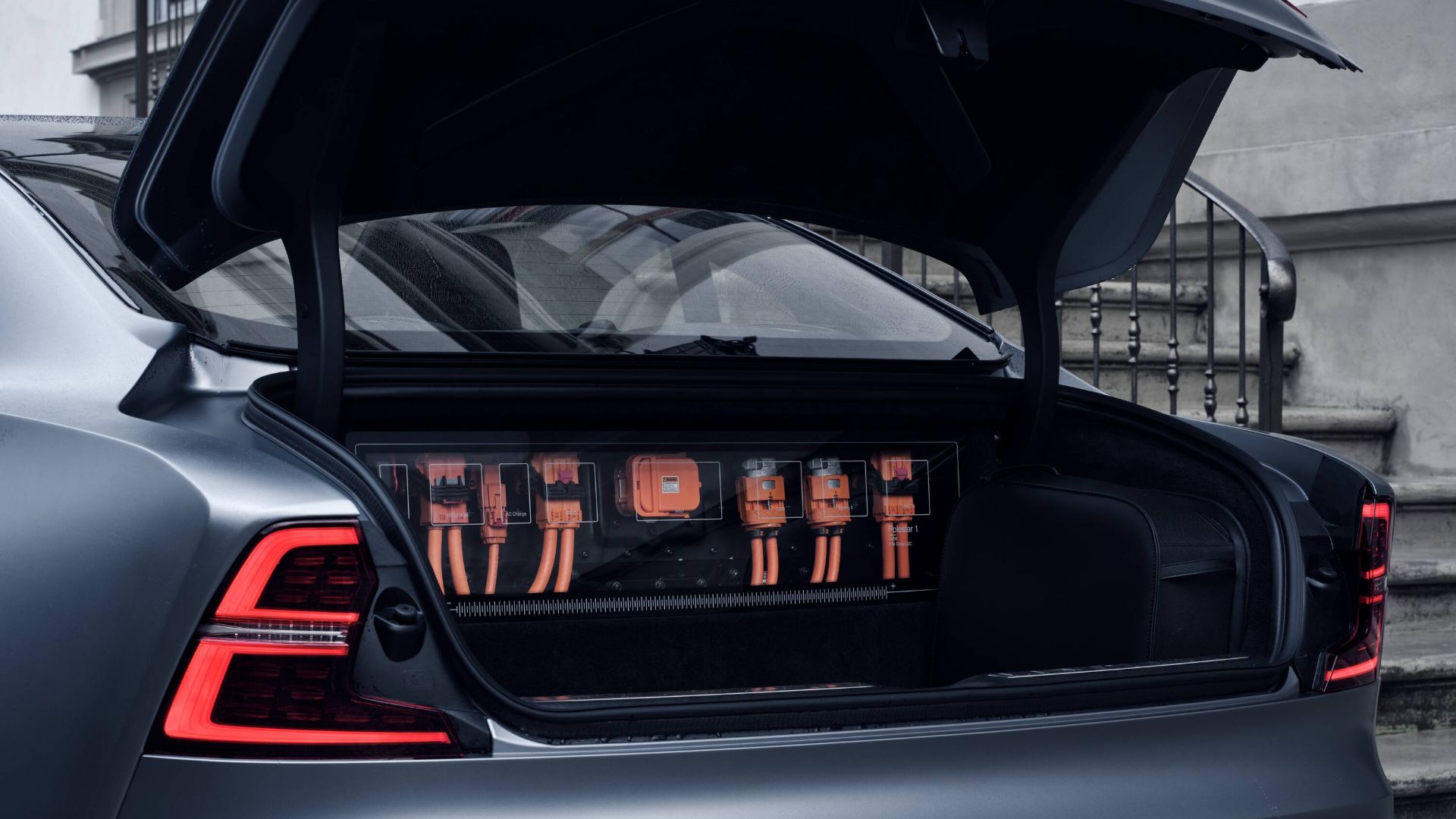 Let’s start with the hybrid system, which combines a supercharged and turbocharged 2.0-litre petrol engine with a starter-generator and two 85kW electric motors on the rear axle. The net result is 609hp and a walloping 738lb ft (1,000Nm) of torque: more than an Aston Martin DBS Superleggera. Select Pure mode and, with the batteries fully charged, you can travel 77 miles in zero-emissions silence. Or switch to Power and blast to 62mph in 4.2 seconds. The latter is more fun.

There are some exotic components in the mix, too. Bespoke Öhlins adjustable dampers are more readily seen in motorsport, and offer five stages of adjustment – or 22 if you’re prepared to get the spanners out. And the six-piston front brake calipers come from Akebono: the supplier used by McLaren for the P1.

The Polestar also scores for exclusivity. The plan is to build 500 cars a year, and 1,500 in total, so you might never see another one (or should that be another ‘1’?). The drawback of such small-scale production is the disproportionate cost of retooling for right-hand drive, thus the steering wheel only comes on the ‘wrong’ side.

Best seats in the house 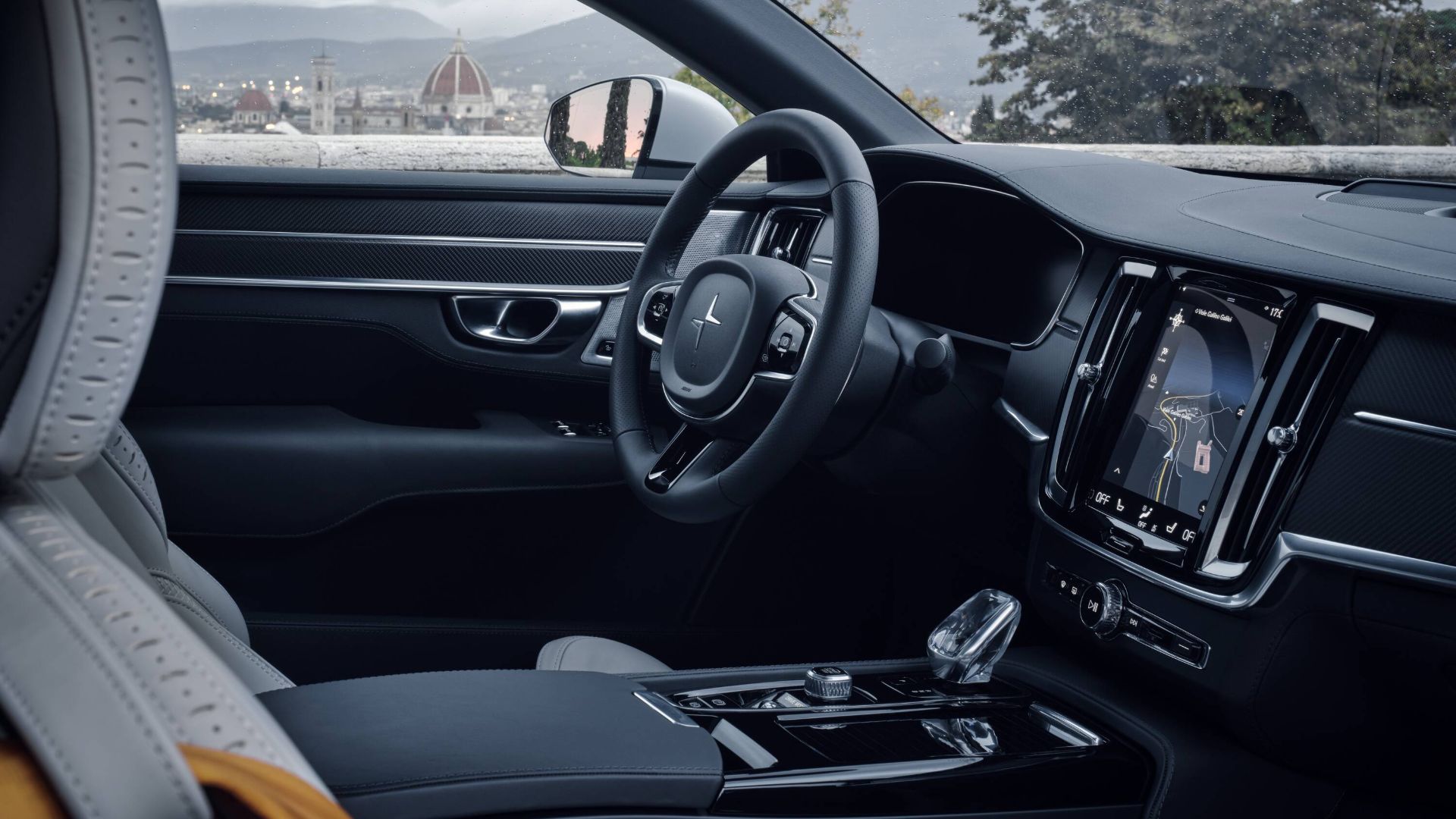 Inside, the 1 is very ‘Volvo’; normally a good thing, but less palatable when you’ve paid six figures. The dashboard, with its Orrefors crystal gear selector, is lifted straight from the S90. And the touchscreen infotainment lags behind the slick Android Auto system in the Polestar 2 (more on that shortly). At least Volvo’s sumptuously padded seats are present and correct – you won’t find better in a Bentley.

The Polestar gathers speed calmly and relentlessly, the mid-range muscle of its e-motors delivering a hefty shove between your shoulder blades. Drive is seamless, despite there being no mechanical link between the (petrol-driven) front wheels and (electric) rears, and the eight-speed automatic gearbox responds quickly and intuitively.

Cool details of the Polestar 1:

The chassis does a good job of disguising its substantial heft, too. At 2,350kg, this 2+2 coupe weighs 10kg less than a Range Rover, but those big-ticket dampers keep it fluid and unflappable. The steering is pleasingly lucid and the brakes are just brilliant. What’s not to like? 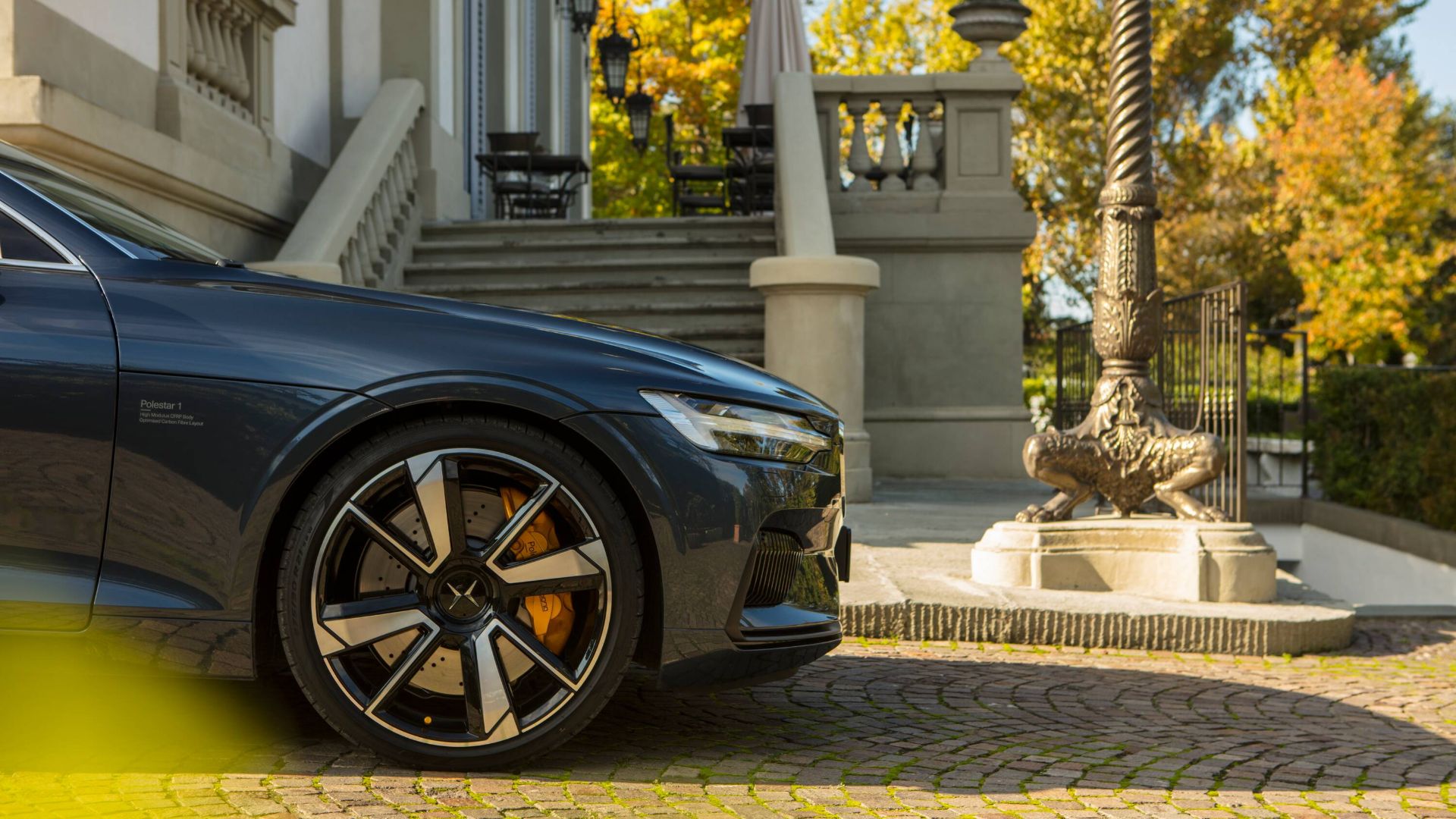 Well, there are a couple of things that count against the ‘1’ as a long-striding super-GT. Firstly, the ride, which is quite abrupt on those huge alloys and skinny-fit 30-profile tyres. Perhaps the suspension could be manually slackened off a little – I didn’t attempt it.

Secondly, there’s the tiny boot, which shows off the hybrid electrical connectors behind a perspex cover, leaving just 143 litres for luggage. You can pack a toothbrush and some pants, but that’s about it.

Despite its flaws, the ‘1’ is a very cool and covetable car, and a relatively future-proof modern classic. Yet Polestar has already moved on. It’s money-making ‘2’ SUV is here: a fully electric rival for the Tesla Model 3 that feels much further removed from its Volvo roots.

This is a snapshot of a moment in time, then – but I expect it’s also the start of something big.

The GT is Ford's track-focused supercar flagship, with a carbon fibre body, a 656hp V6 engine and a Hollywood back-story. We drive it.
Read more
Car Reviews

As the Toyota GR Yaris hogs the headlines, we revisit its predecessor, the Nurburgring-honed Yaris GRMN – yours for half the price.
Read more